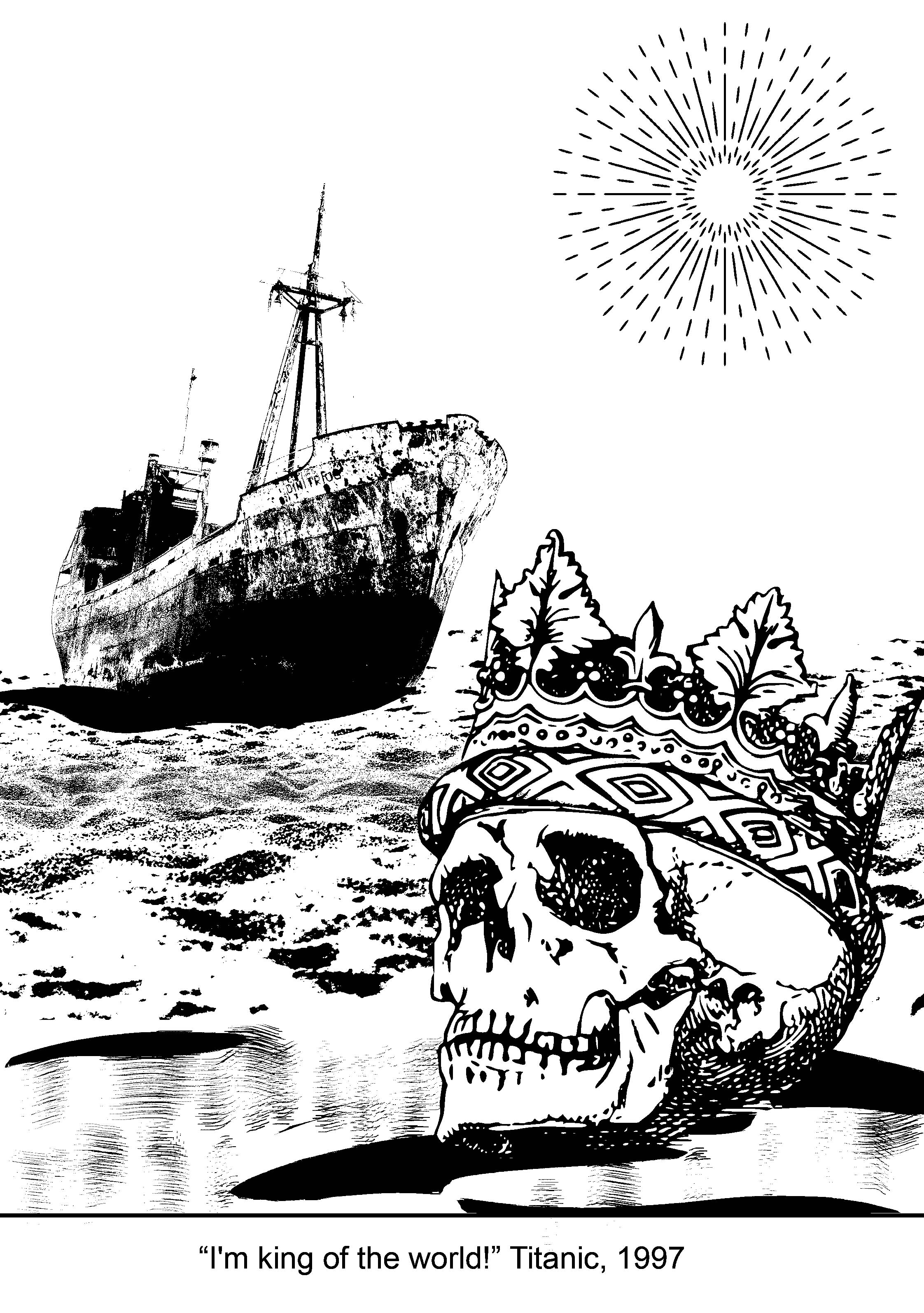 I felt that after a few drafts, I should really put the context of the movie in the design. So firstly, I featured a skull which representing death and as we know that there were not many people survive after the titanic sank.

The crown is to represent that he is a king and also a guy who seek for freedom as he was left in the deserted island after his boat malfunction. He was the only one left after the disaster. Due to the limited of supplies, he eventually died in the island. I was actually quite happy with my final design for the quote ‘I’m king of the world” from Titanic. 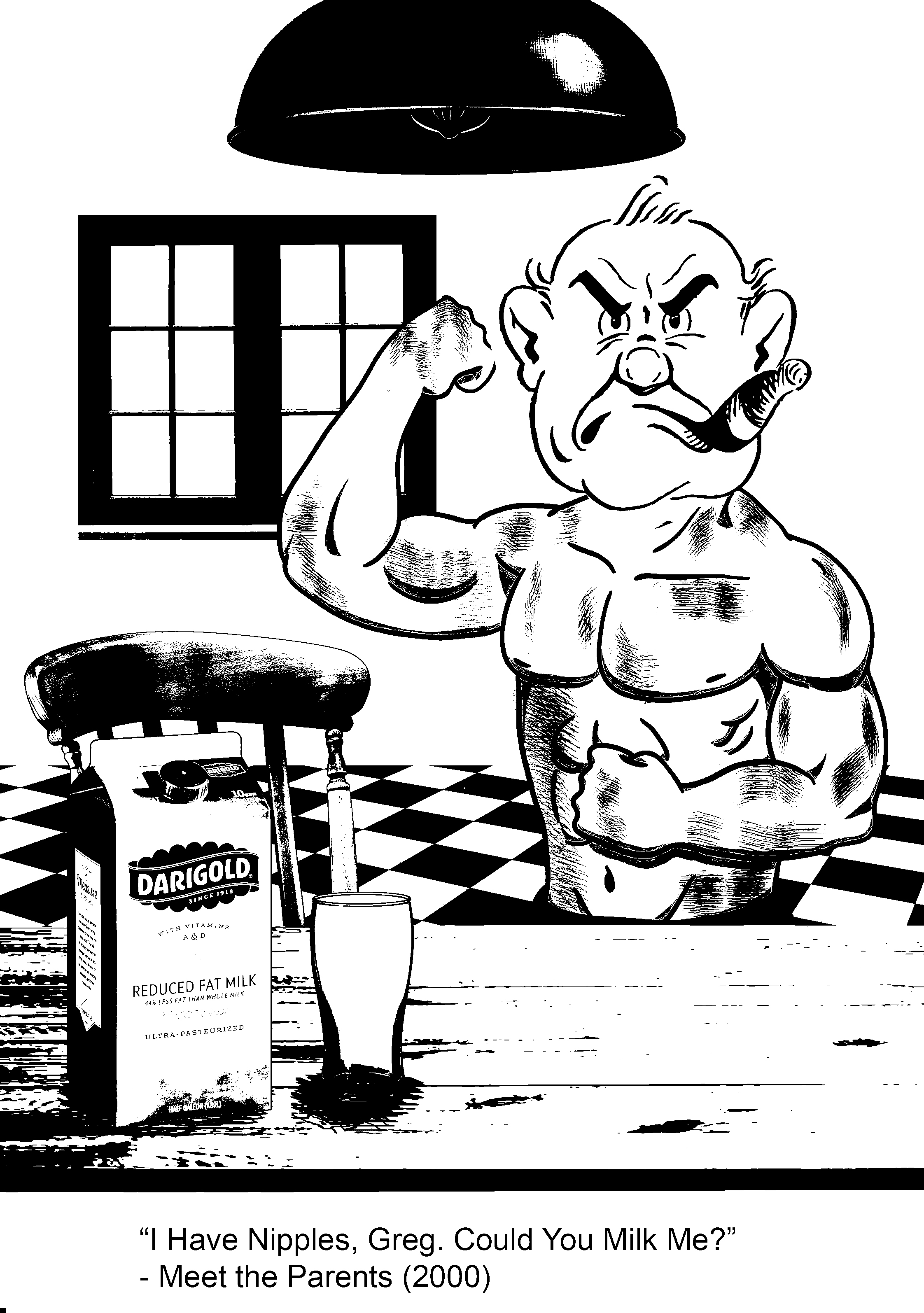 This is one of my favourite outcome that I did. I decided to do it like a comic style which I got my reference from “Butcher Billy” that I research on. I decided to go for the comic style because the quote has a little sense of humour and also being sarcastic.

The action, the body and the facial expression with a cigar on given an impression that he’s a grumpy old man which the movie in the quote is all about. I painted the body textures to give a little more comic kind of look which the original photo doesn’t have it. The settings of the movie is in the dining hall so I designed the set with a wooden table with lamp and the milk in the foreground.

The window is at the background to represent that you’re in a house. I doesn’t want to put so much elements at the back which I wanted to keep things as clean and simple as possible. 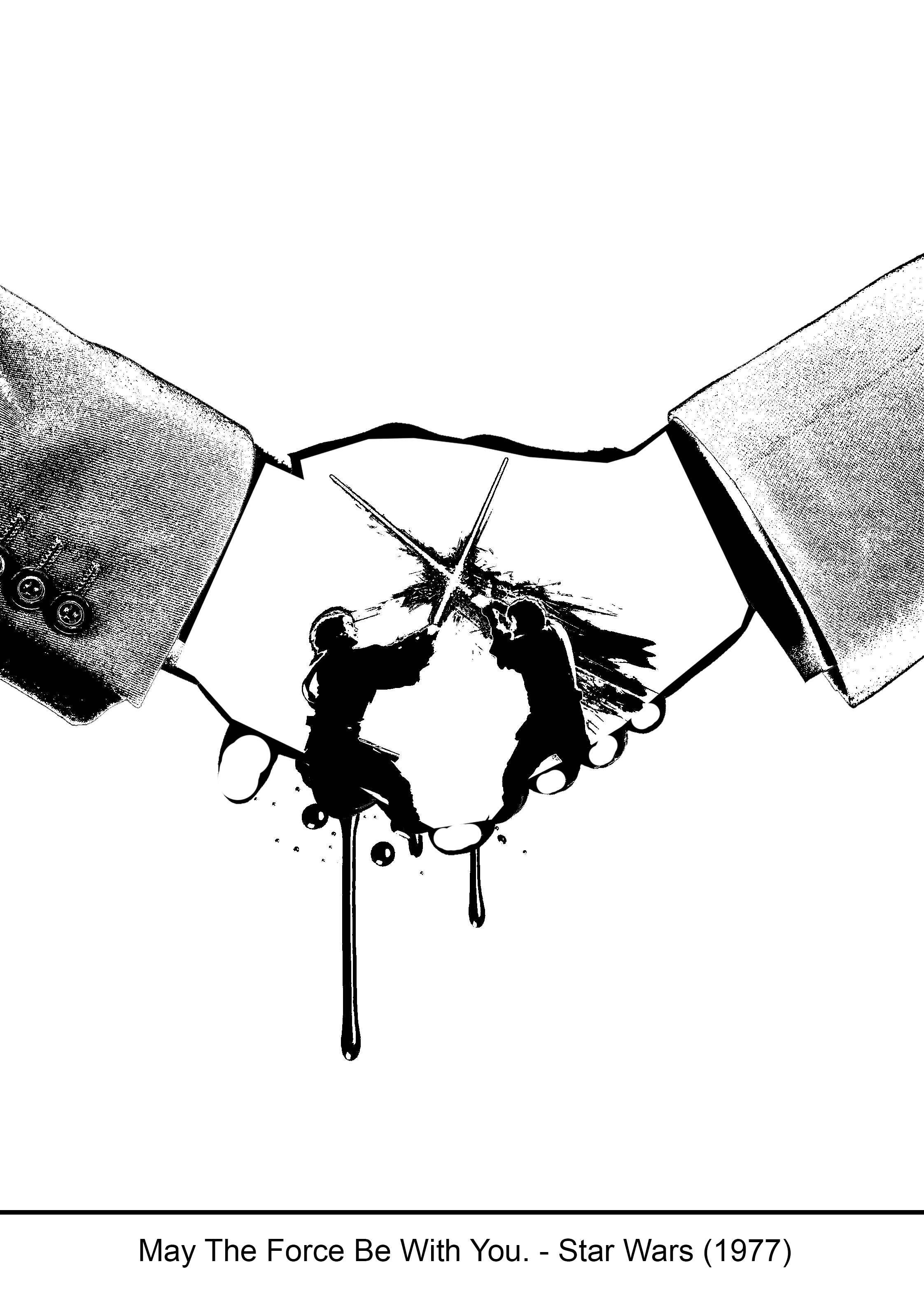 This is one of the quote that I did quite many drafts on it and I decided to stick with the artist reference “Noma Bar”. I wanted to try using the negative and positive space and I want to keep the design as simple as possible to understand the quote well. This design featured 2 friends, suits also representing they are presentable and there’s negotiate and conversation in between. Both are shaking their hands which representing “Good luck”. It is also the meaning of the quote.

In the middle, there are 2 guys who are fighting against each others. As in the movie “Star wars episode III”, Anakin Skywalker betrayed his master Obi wan and became Darth Vader at the end. So sometimes you may be best friends or brothers but when things happened, either one side or both sides will get hurt which the blood in the design represent. 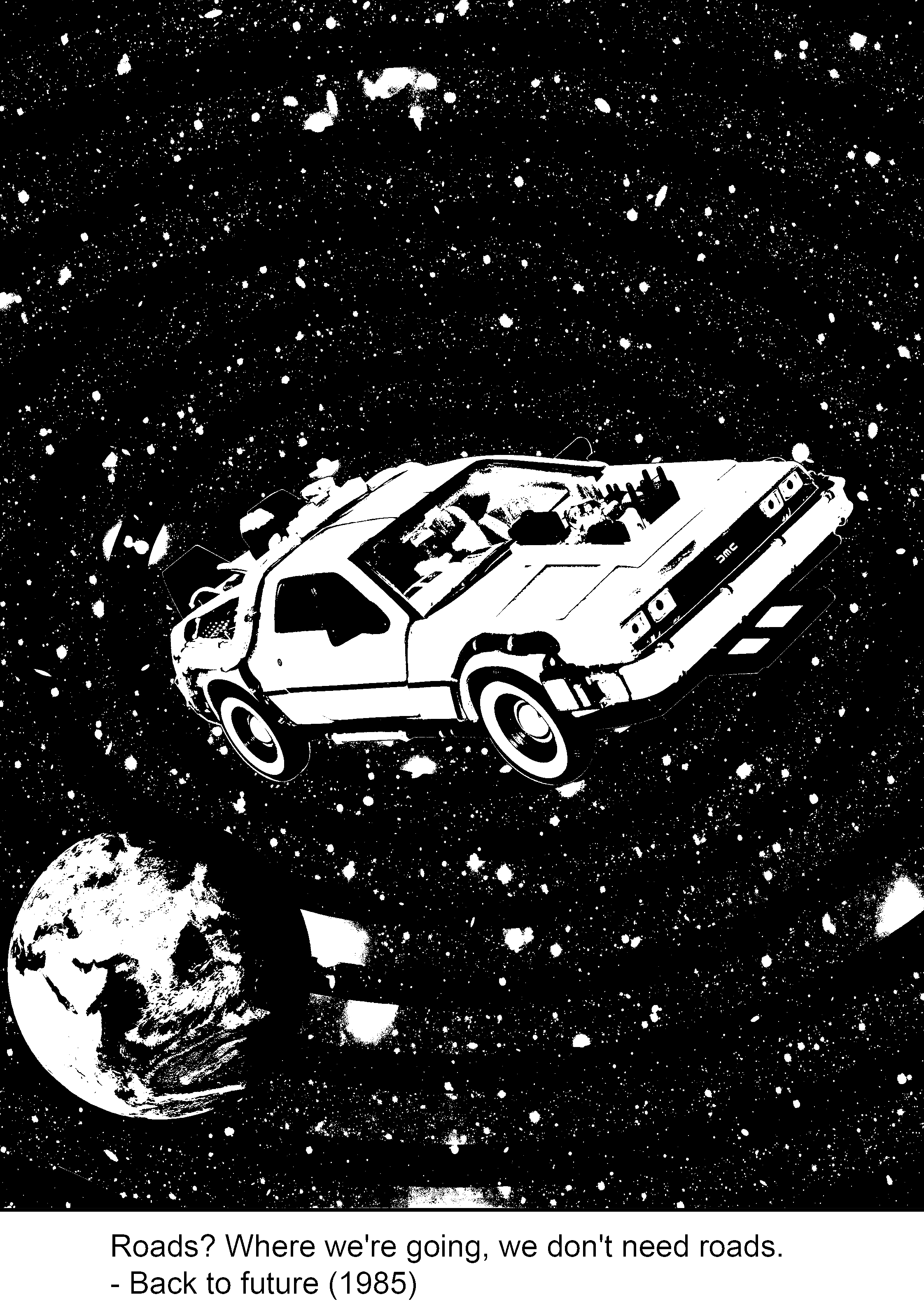 When I first look at the quote, I decided to do something that is not related to the road. It can be either on sea, at the sky or even space. I felt that after created a few drafts, the subject in the space looks more eye pleasing to me.

I added the spiral effects and by overlaying it which gives like a milky way effects in space. The car is also the main object which relates to the movie. 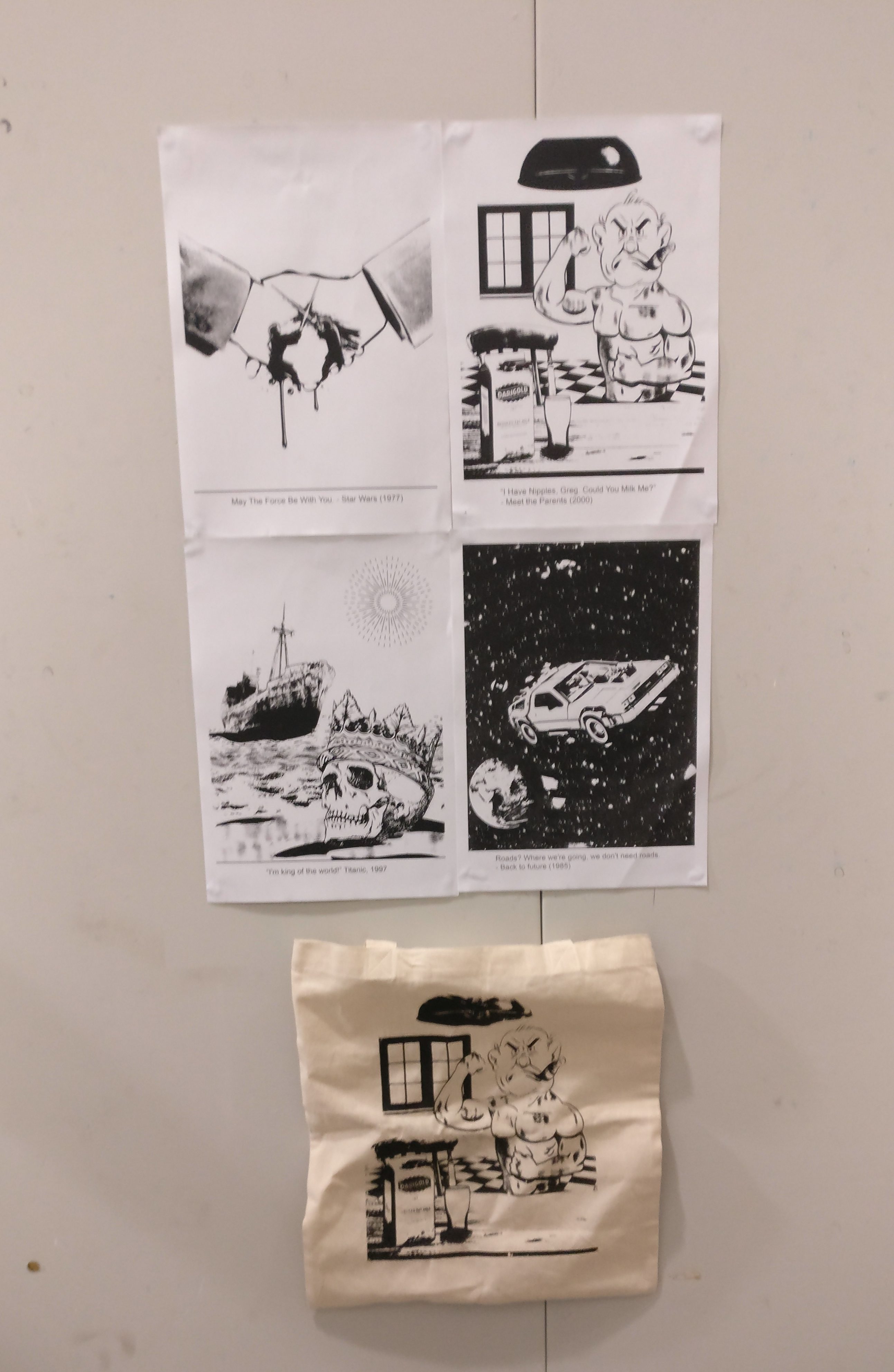 Overall, it was a good experience playing with photoshop using different kind of techniques like examples the threshold, half tone and posterize.

After I presented my 4 designs and hearing the feedbacks, I realised that a few of my designs can be improve and the meaning of the quotes can be further much more elaborate. I will try to improve on my next project! Totally looking forward to our final project “Ego”.

This was my very first design idea, after the whole process I felt that I don’t really like the outcome. I literally puts everything that the quotes has like the ‘King’ and ‘World’ on a boat in the design. I felt that I have lost track little which I didn’t emphasize the quote properly. 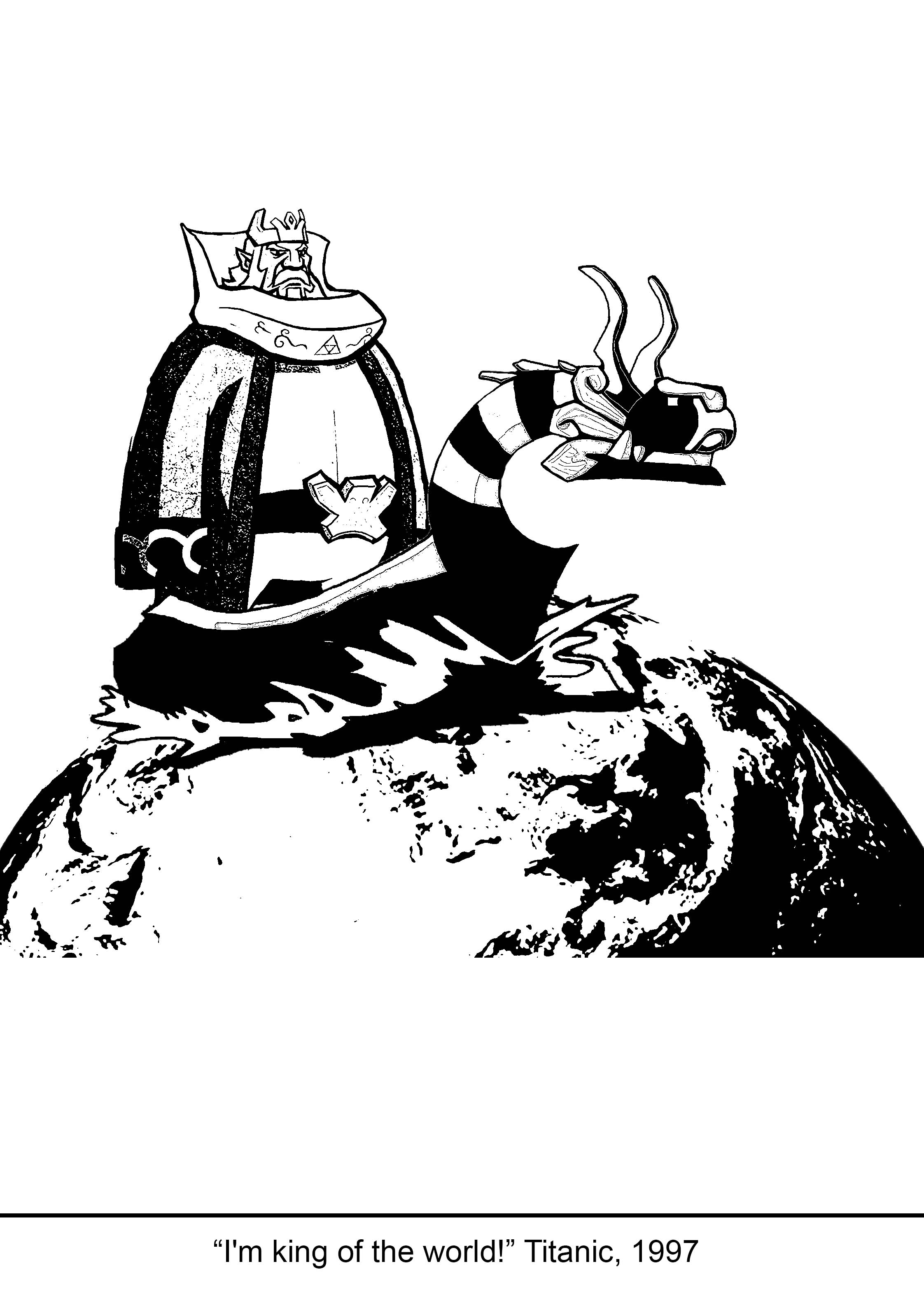 After exploring some ideas and also looking up at artist references, I did something like a comic kind of effects on my design. But I still felt that it missing something, it doesn’t bring out the content of the quote.

Movie quote: “I Have Nipples, Greg. Could You Milk Me?”

I wanted to design something that I research on which is to make into something like a comic kind of textures. I started out by putting a cow with nipples demanding people to milk in a farm, the image may look good but it doesn’t really suits the movie quote. After consultation it should be something in a sarcastic or sarcasm in a way.

After looking through the scene again the the movie “Meet the Parents”, Yes! It’s something related to sarcasm from the father-in-law in a dining scene setting.

I did a replacement from a cow to a drunkard guy who is been sarcastic asking someone to milk him as he undress himself. But it still doesn’t fit the content of the quote and the movie which I will try to further improve on. 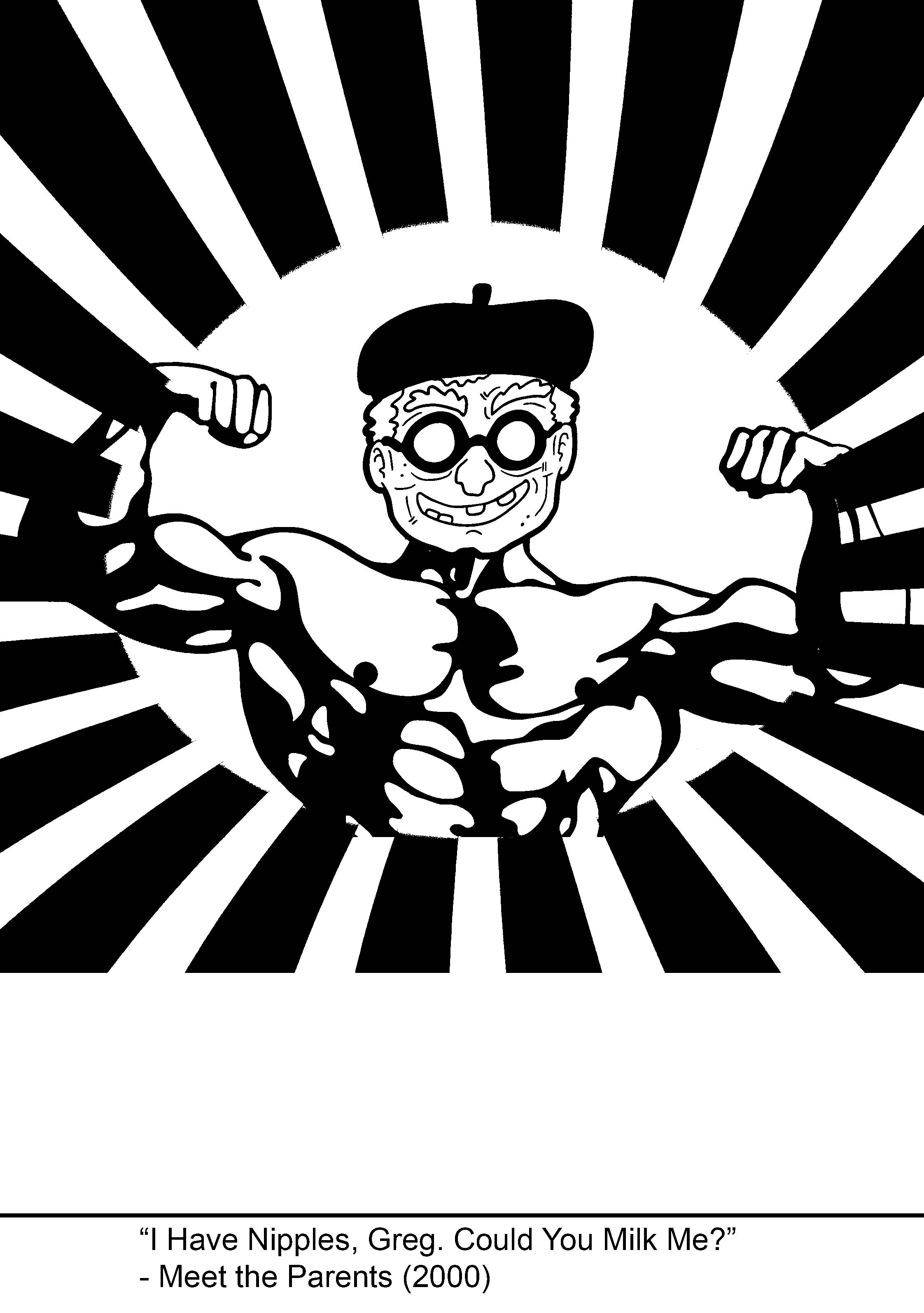 For the 3rd design, I wanted to focus more on the father-in-law, what I really visualise is that, he’s fit in a way to represent he’s fierce and we can really see the focus of his nipples which relates to the quote above. But it still feels like it is lacking of some elements behind the design. I guess I would really have to re-watch the scene and again, try to explore more elements and artist references for ideas to further improve on the design. 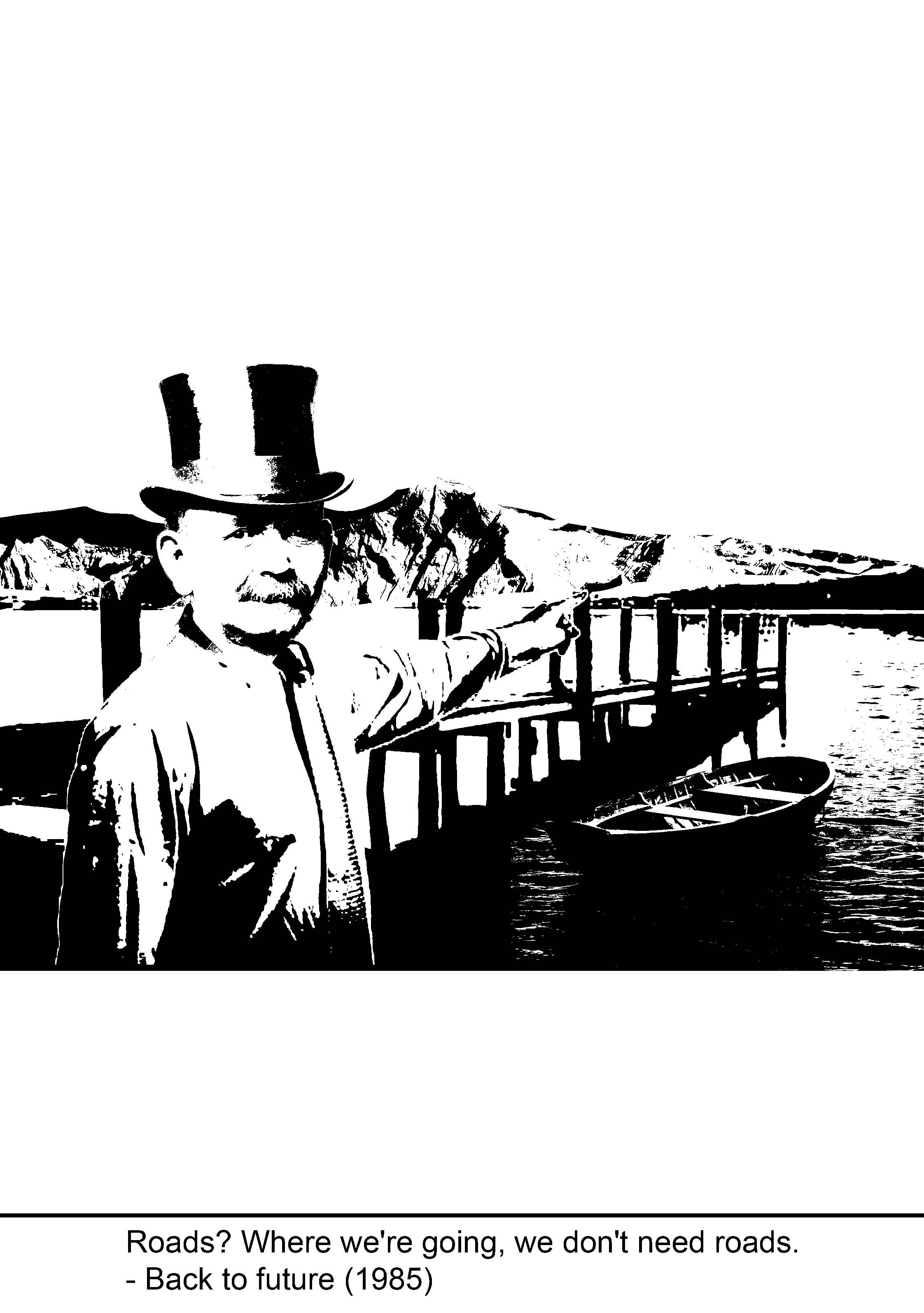 This quote is from one of my famous childhood movie, “Back to future”. When I first started designing, the quote has given me a hint that the whole design won’t be at the road side, it should be either somewhere else other than road. My very first design was that, It shows a old guy pointing at the sea but after designing it I felt that the overall layout actually felt kind of plain. 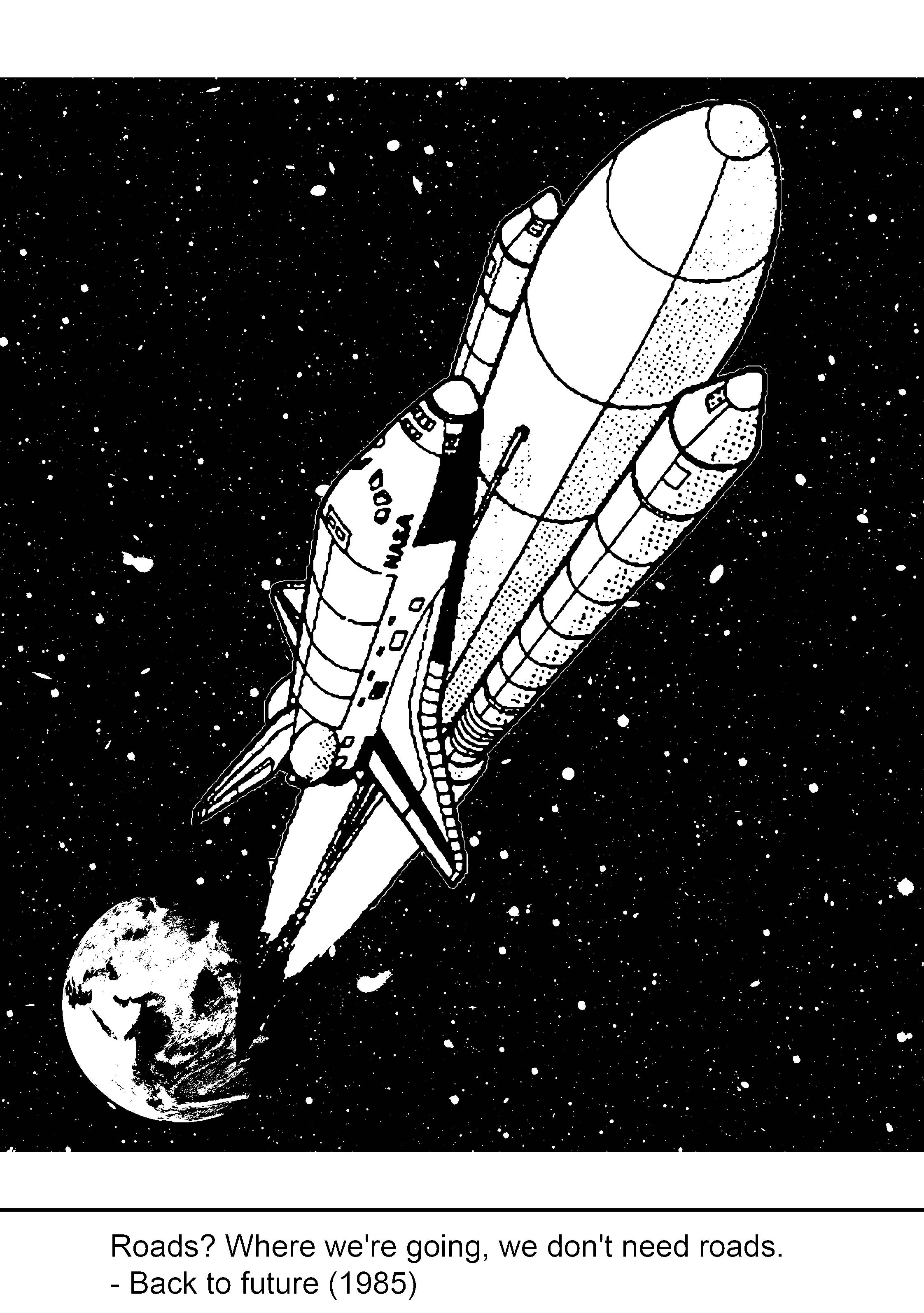 I was pretty happy with this design as I felt it somehow relates to the quotes but it still doesn’t have the context of the movie. I felt that after creating this, it’s just a space shuttle launch from earth to space and doesn’t seems to belong to the movie. After consultation, I was given an suggestions to replace the shuttle into the car instead so it will somehow link up with the quote above. 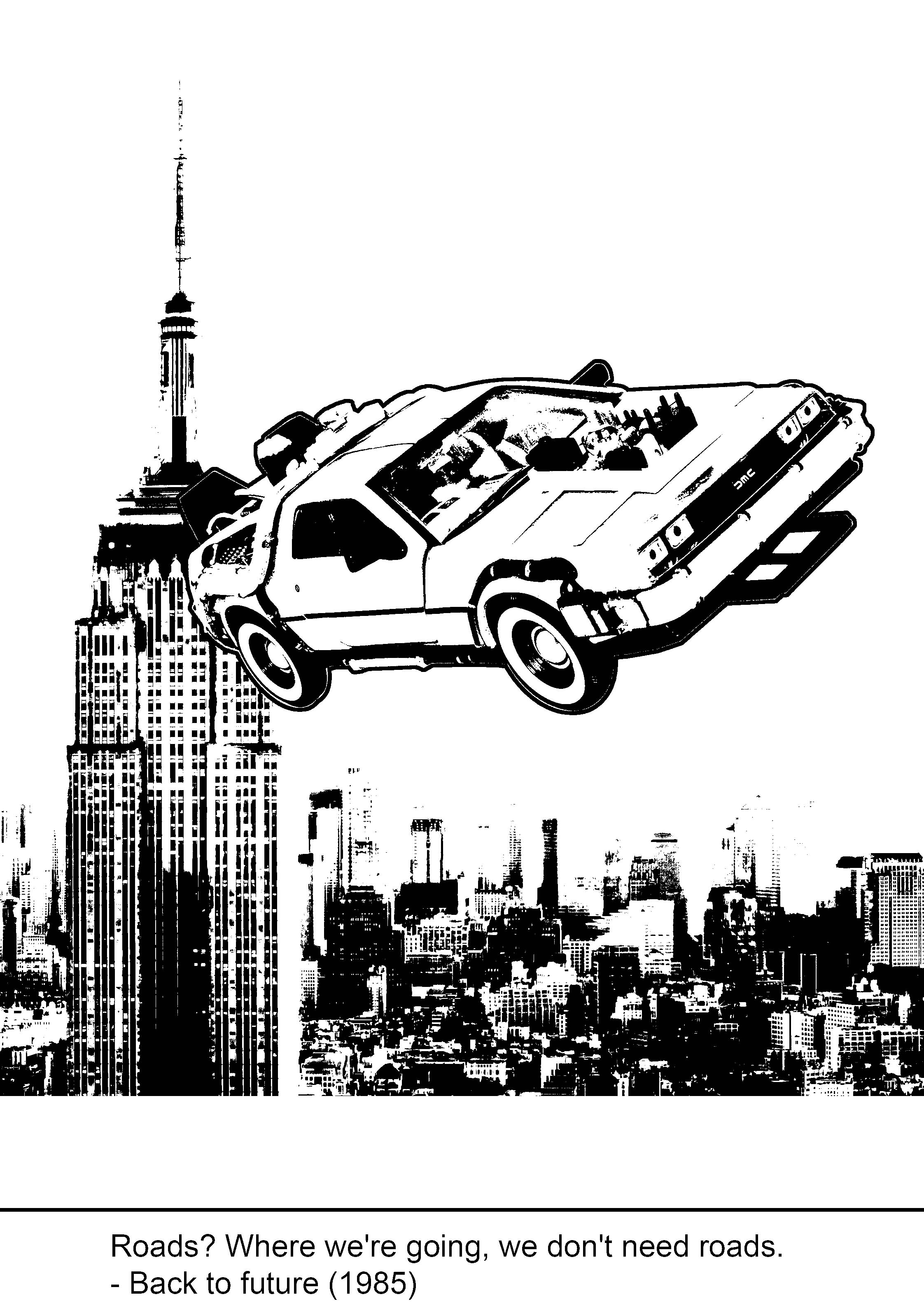 I did this right after the consultation, I replaced the whole layout to somewhere around the empire state and the car from the movie. Somehow, I felt that the ideas is getting closer and closer. I believe the next one will be better. 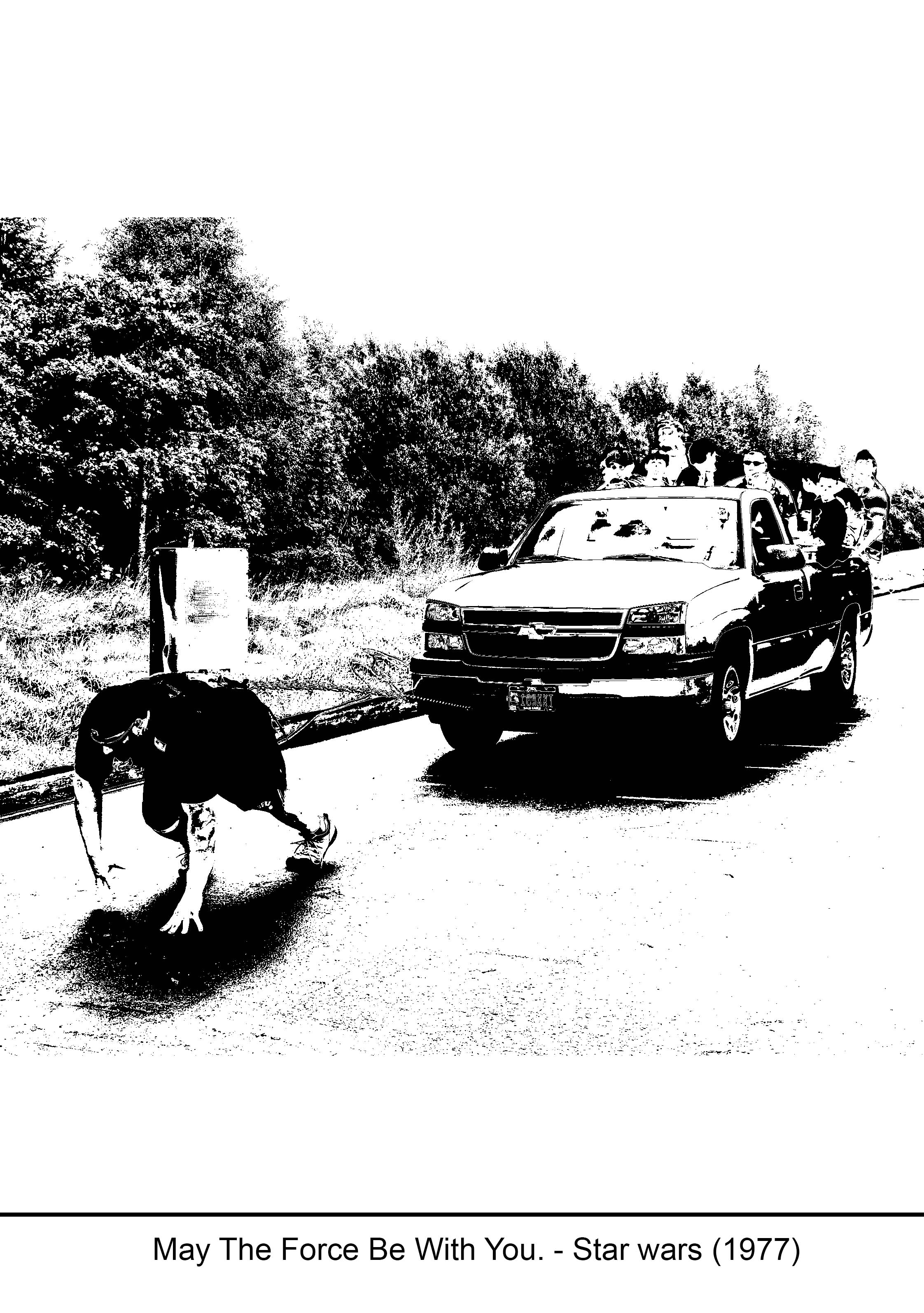 This was the very first design that started out very literally by just emphasizing on the word “Force”. so I just edited in a way that looks like a few photographs smack right in the frame which kick start my brain of what is threshold all about.

Right after some research and by looking at artist references, It has to have a vintage look like an pencil sketches look. My initial plan was to give a surreal look that somehow related to the Star wars. I uses the seesaw to show the word “Force”. Right after the consultation from my professor, she suggests that actually it should be another way right which is to show that the small guy is actually overpowered than the bigger guy.

I did a swap on the images but it still doesn’t look appealing to me in a sense. I felt that something is either missing or I added too much stuffs in. It just doesn’t feel right to me. I decided to explore more and continue to work on my ideation of creating the layout for the quote. 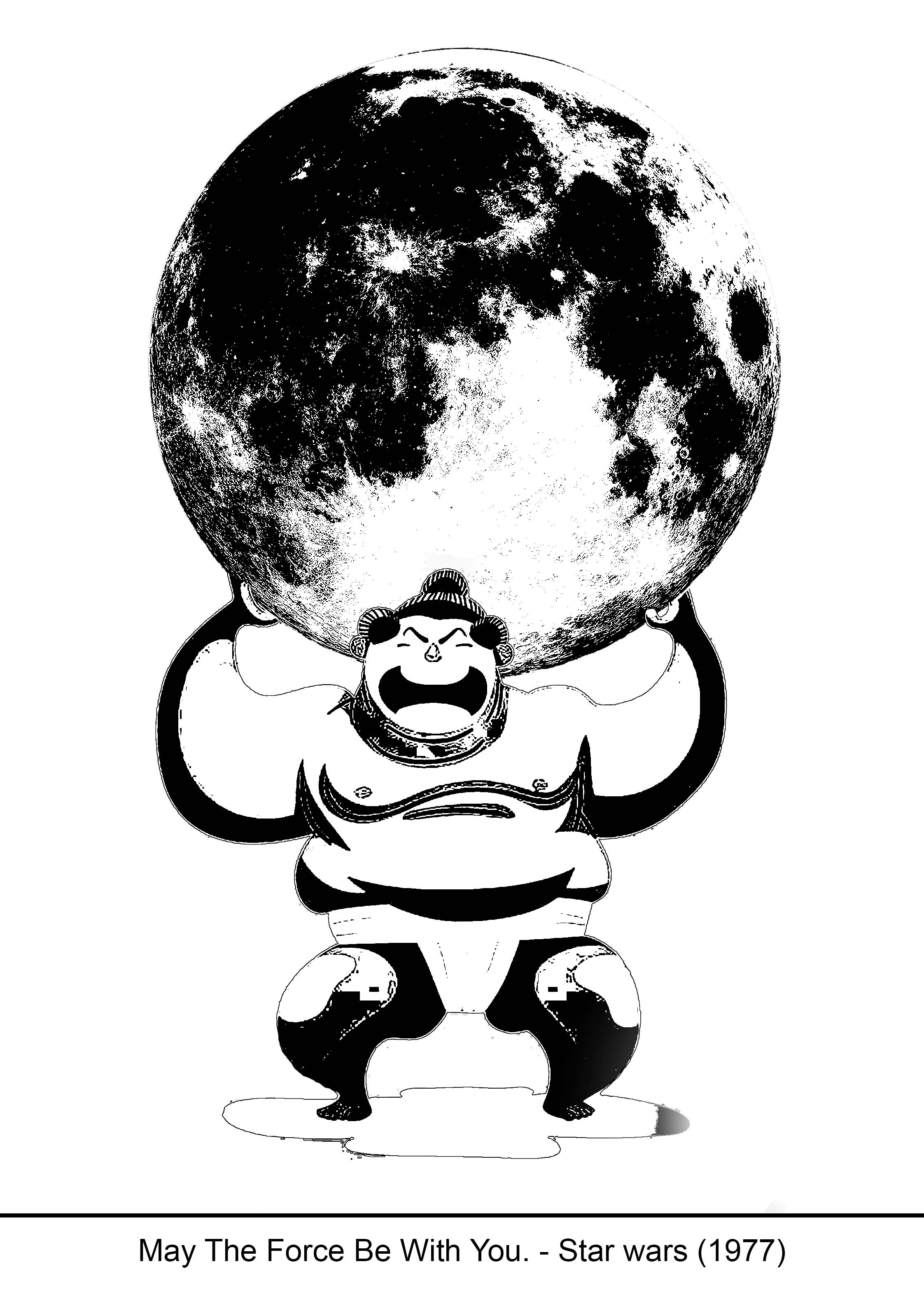 I designed this in less than 10 minutes, I just did a quick exploration of my ideas and wanted to try whether will it work or not. Sadly, it doesn’t fit or work properly in the design. it just a quick warm up for my brain and to execute the ideas out quickly. I felt that it deserved as a draft but will definitely helps me to think further. 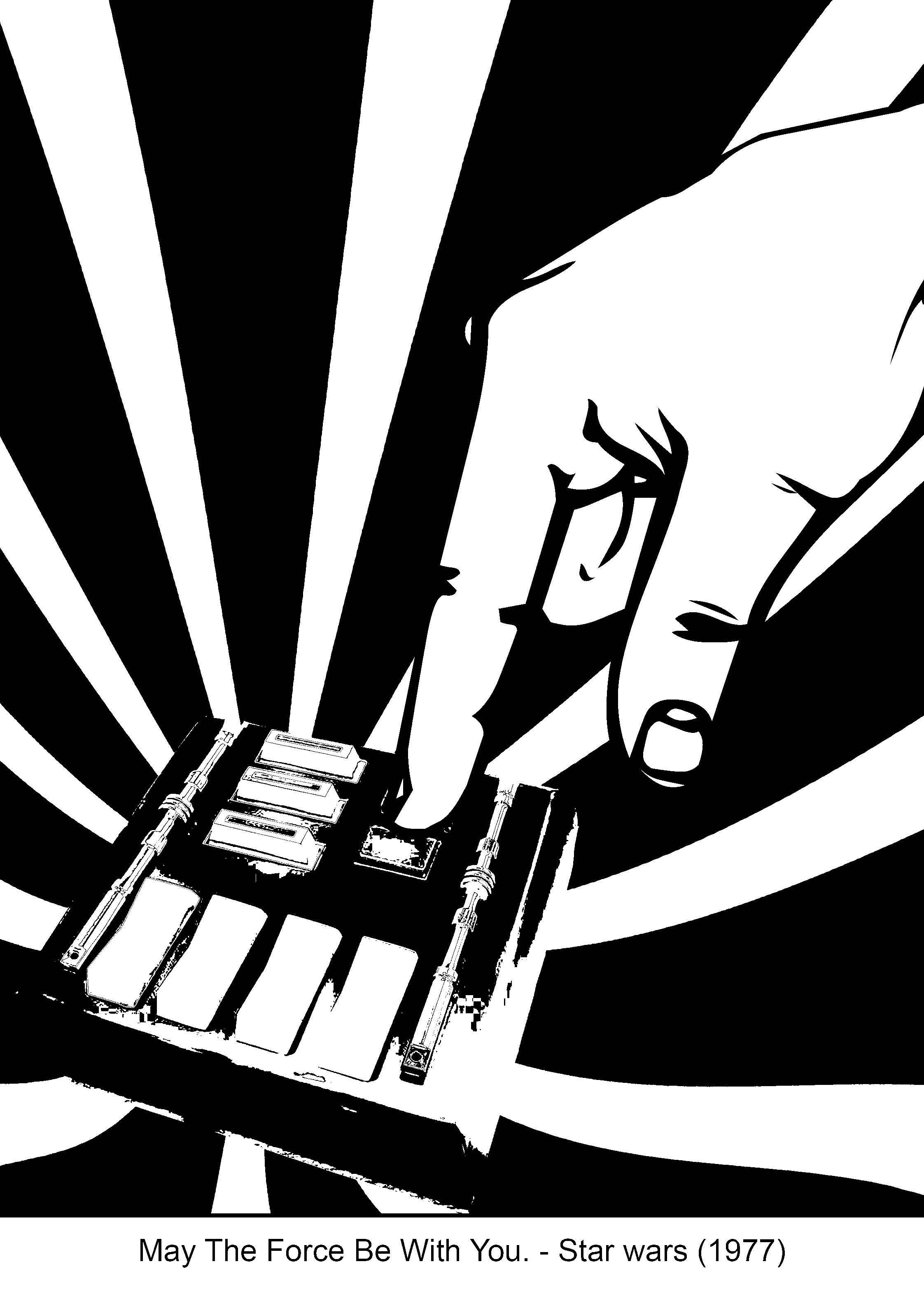 After focusing so much energy on trying to extract ideas from the word “Force”, why not just try to refocus a little and put the context of the movie in the artwork. So I decided to try out by putting the armour plate of Darth Vader in the design. It gives an idea of a guy trying to “force” start or restart a button. But after consultation, It seems like not many people recognize the piece of device. So it means that I have to drop the ideas and try to explore more. 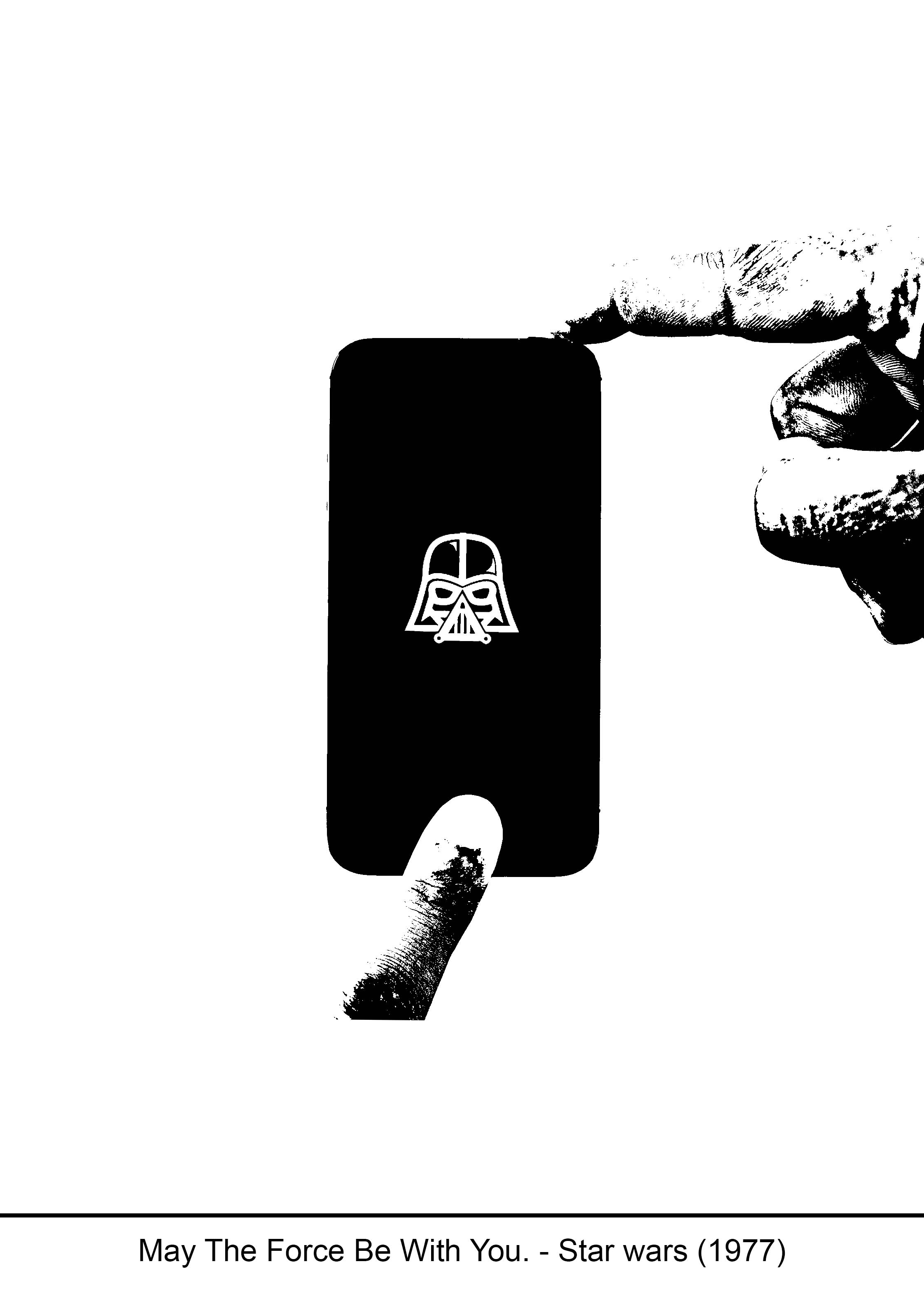 After doing some research on artist references, I decided to explore more into negative and positive space from the artist “Noma Bar”. I tried to keep things as simple as possible so that people can really focus more on the quotes. But I felt that it is still missing something else in the images. 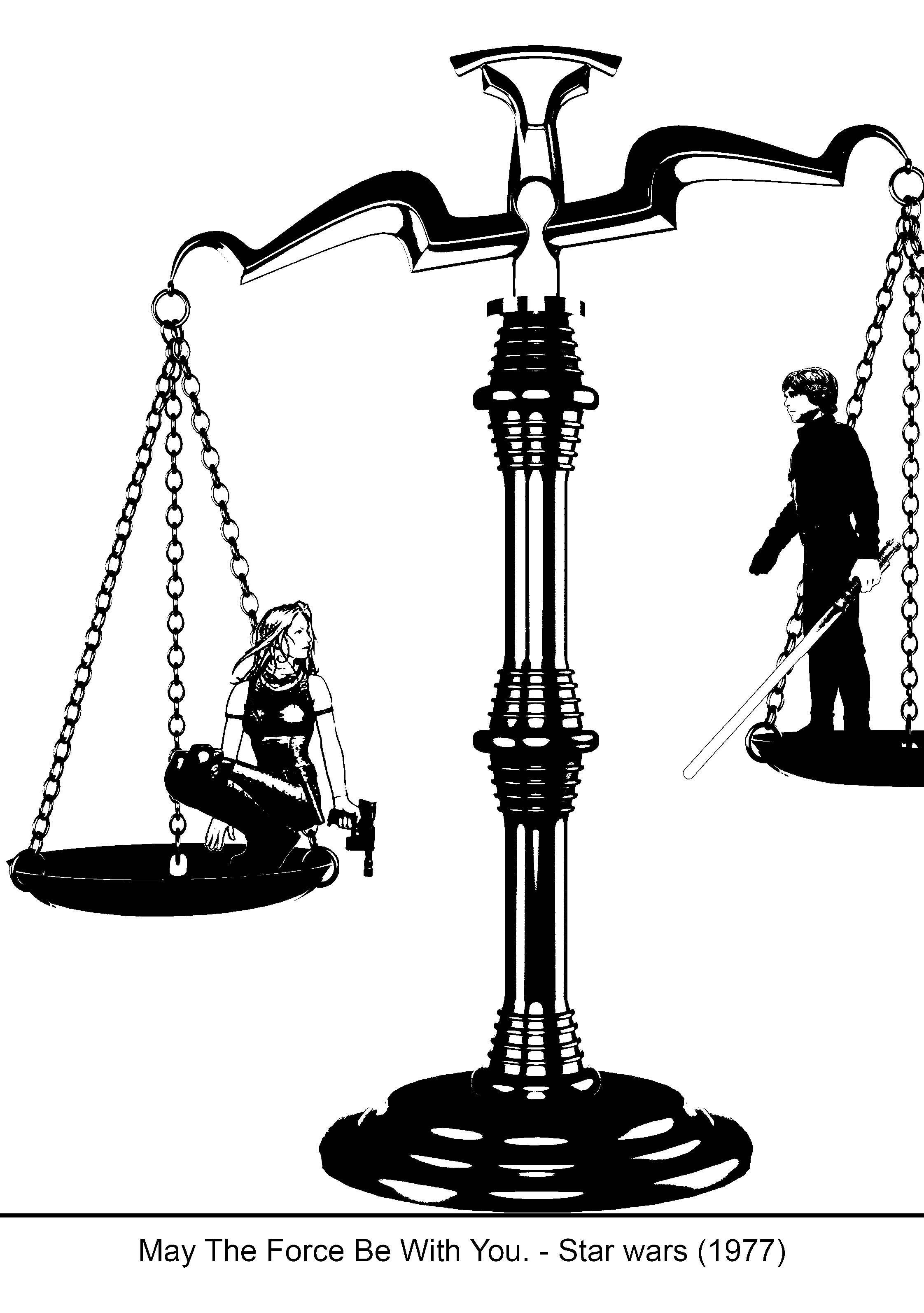 Again, I executed this design in less than like 10 to 15 mins, as the ideas of old weighting machine came  into my mind. But I had trouble finding and trying to fit things in the images. At the end I uses the 2 main characters in the old Star Wars movie which is Luke and his wife. I wanted to try something new which is to give a little sense of humour but it doesn’t seems to look good in the image. I decided to drop the idea and really focus back into the meaning of “May the force be with you” which representing “Good luck”. I realised I executed quite a lot in this quote which really helps develop my idea further.

My idea behind the artwork is to promote Health & Greenery at the same time by using “Garden By The Bay” as a local location. As Singapore are moving towards to clean and green enviroment, by building more parks and running tracks which encourages people to run while enjoying the scenery at the same time.

3 Pieces of artwork that I created using found images on the internet and collage it together using photoshop which also based on first hand experience of what I’ve seen in the train. A very few examples like the kid which they are living in their own world, colors and happiness existing in their life, another one is about a working adult struggling his work-life-balance and lastly, a old man who knows he’s old and slow but yet he wants catch up his pacing which resulted stubbornness in life.