I caught the show on the second night, which I realised has a very different sequence of events as compared to the first show. When I first walked into the performance space, I saw that the performance was taking place within another work, Disappearance: Bar in the Gallery by Lee Kang-So, originally presented in Korea in 1973 and recreated for the National Gallery Singapore as part of a larger exhibition. Disappearance on its own is a participatory piece that invites visitors to the gallery to take a seat at the benches, which allows the visitors to experience having a drink and hanging out at the artist’s favourite traditional Korean pub, and to bring everyday life into a white cube setting.

One thing I noticed firsthand was the stark contrast between the technological equipment set up by INTER-MISSION and the organic, raw materiality of the wooden benches in Disappearance. It immediately gave a sense that there were two works at play here, that the performance by INTER-MISSION was being superimposed onto Lee’s work. 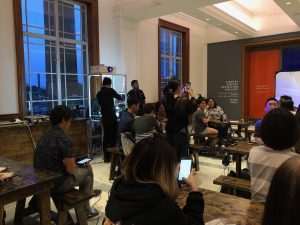 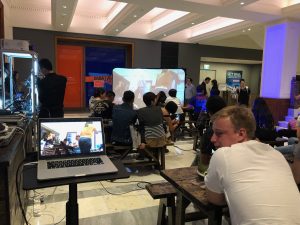 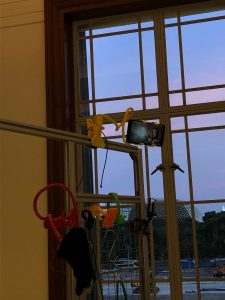 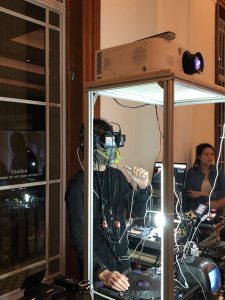 The actual performance began when the performers began to walk around the benches holding phones in their hands. One of the performers held a straight face, while another was smiling. At the start, they just walked around the space, with little motion and minimal interaction with the audience. It felt like they were coexisting in the space with the viewers, but almost ignoring the fact that there are so many people watching them.

There were many screens and many videos being played simultaneously, as can be seen from the videos below. The key video was a projected image on the screen which appeared to be the livestreams from the performer’s phones overlaid on top of a livestream of the entire gallery space. There was also a large television screen at the back which showed a video of what seemed to be the same performance, but held in a different space and time.

There is also auditory input from INTER-MISSION, and they were creating jarring and uncomfortable noises throughout the entire performance, which to me sounded like static and noise. I think the unpleasant audio set a very specific tone to the entire performance, and I personally felt that the performers’ movements and actions appeared to be even more bizarre and almost creepy due to the audio that was in the backdrop of the entire space.

As the performance continued, there was increased interactivity on two fronts:

The performers seemed to “begin” to realise that there were other people in the space, and brought the phones over to include the audience’s faces in the livestream as well. This felt like a turning point in the performance as the distance between the performer and the audience was diminishing, and there is this attempt to make a connection and include the viewers in the narrative of the videos. Also, the performers began to acknowledge each other’s presence and their actions were fed off the other’s actions; it was more reactionary now. 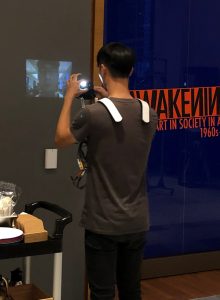 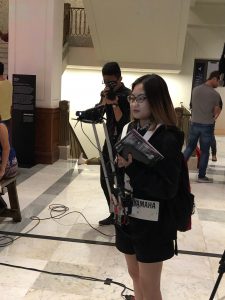 One of the performers was carrying this gear on his shoulders that was simultaneously capturing a livestream of his face and also projecting it. He removed the gear and passed it to an audience member halfway through the performance. After that, she passed it on to another viewer. The interaction between the viewer and the performer sparked off interactions amongst the viewers themselves, who are now taking on the role of livestreaming that was only carried out by the performers previously.

Nearing the end of the performance, one of the members of INTER-MISSION put on a headgear made of screens that completely impaired his vision. The screens played livestreams of the entire performance.

MY INTERPRETATION OF THE PERFORMANCE

The entire performance felt very theatrical. There was a beginning where the performers were first starting to livestream, and when they started to interact more with the audience, it felt like there was a building tension and a shift in the entire narrative of the performance when it started to get participatory for the viewers. There were increased stakes when the audience got increasingly more involved in the work. I think the work reached a climax when the sound-maker put on his headgear. At around the same time, the performer passed on his livestream gear to the audience member. This to me signified the reversal in roles now, the performer has become the audience, part of the livestream, while the audience member is now a performer. There is this clear sense of progression with regards to how the work gets steadily more participatory instead of the audience being mere passive viewers.

My own interpretation of the performance is that it highlights how various narratives of the same event can coexist, as there were various outlets through which the same event was being live-streamed. All these narratives are similar yet different, presenting the same performance from different perspectives, and at times even different timelines due to the connection lag present in the livestreams. The performance draws the audience’s focus to multiple perspectives and media streams but with a disconcerting auditory background. I think this was a conscious decision to highlight how overwhelming media and narratives can be, that we are unable to process it all and in the end it consumes us – as illustrated by the INTER-MISSION member whose vision was impaired by putting on the headgear of screens.