For this research, I am intrigued with the integration of Feminism in installation art, because I think that most artists have feminist performance arts or paintings, but something that I haven’t really come across were installation arts.

Before I expand on the 3 artists, I thought that I would try and contextualize and explain what feminist art might be.

‘As artist Suzanne Lacy declared, the goal of Feminist art was to “influence cultural attitudes and transform stereotypes.” ‘

One of the key ideas in feminist art :

‘Feminist artists sought to create a dialogue between the viewer and the artwork through the inclusion of women’s perspective. Art was not merely an object for aesthetic admiration, but could also incite the viewer to question the social and political landscape, and through this questioning, possibly affect the world and incite change toward equality.’

You can read more over here : http://www.theartstory.org/movement-feminist-art.htm

Moving onto artists, I found a few of them who were quite interesting.

Her most famous work titled “The Dinner Party” (1974-1979), is so iconic and important till this day, that her work is permanently displayed at the Center for feminist art. 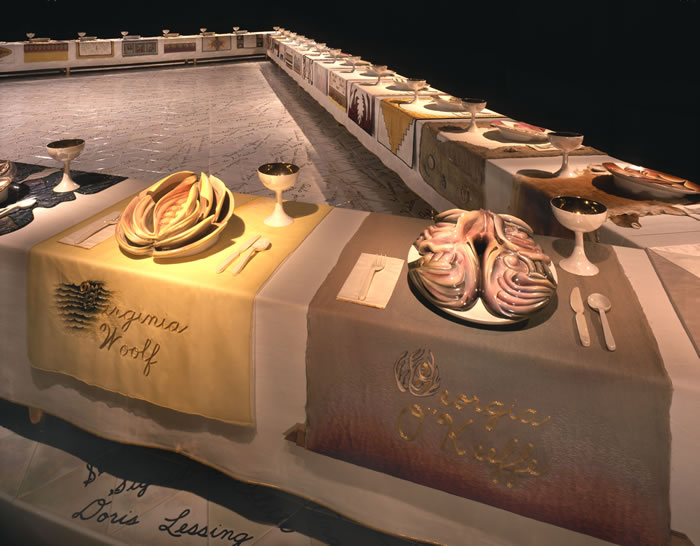 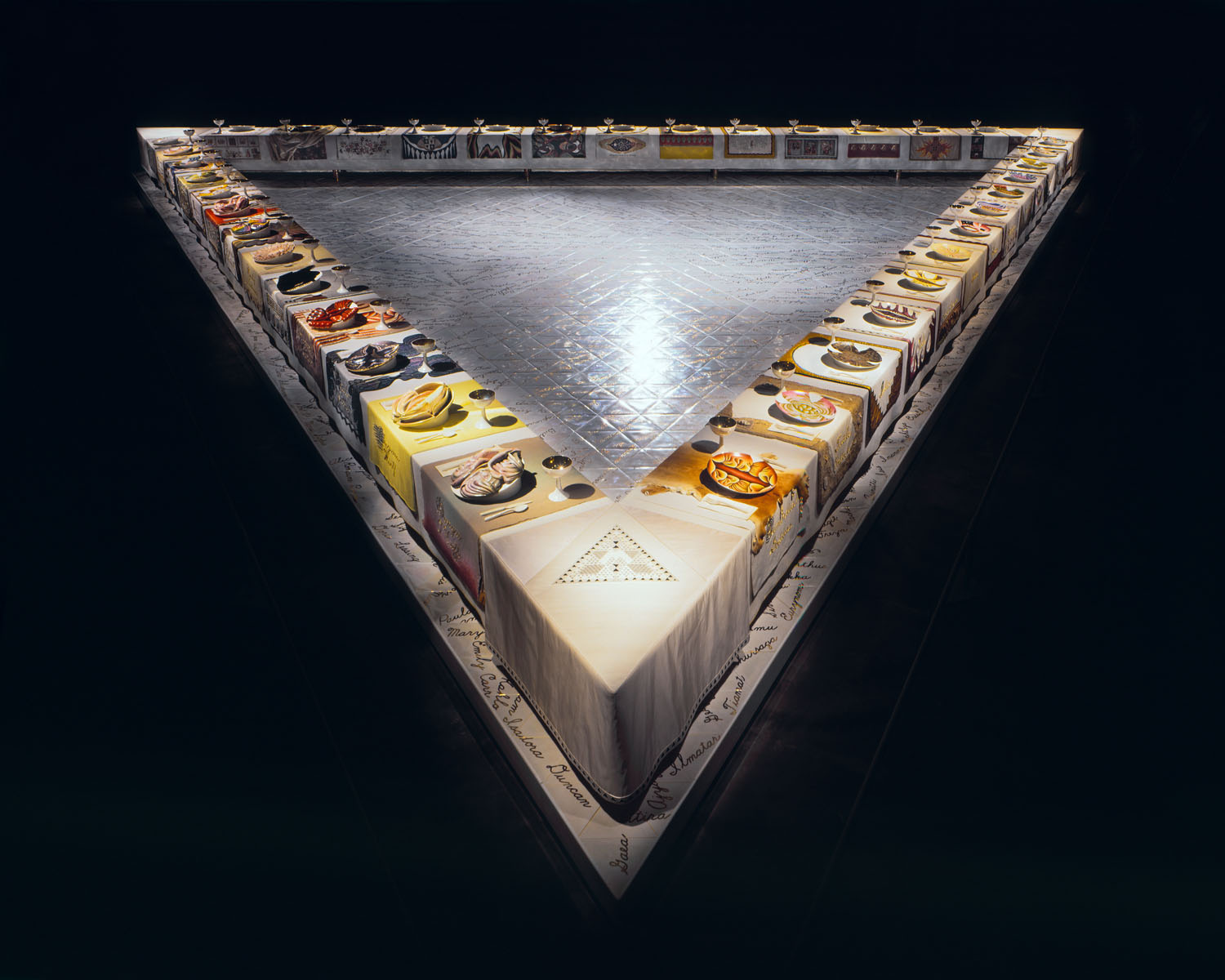 The aim for this art work was to celebrate the many aspects of women’s history and contribution. She did so by having 3 components : 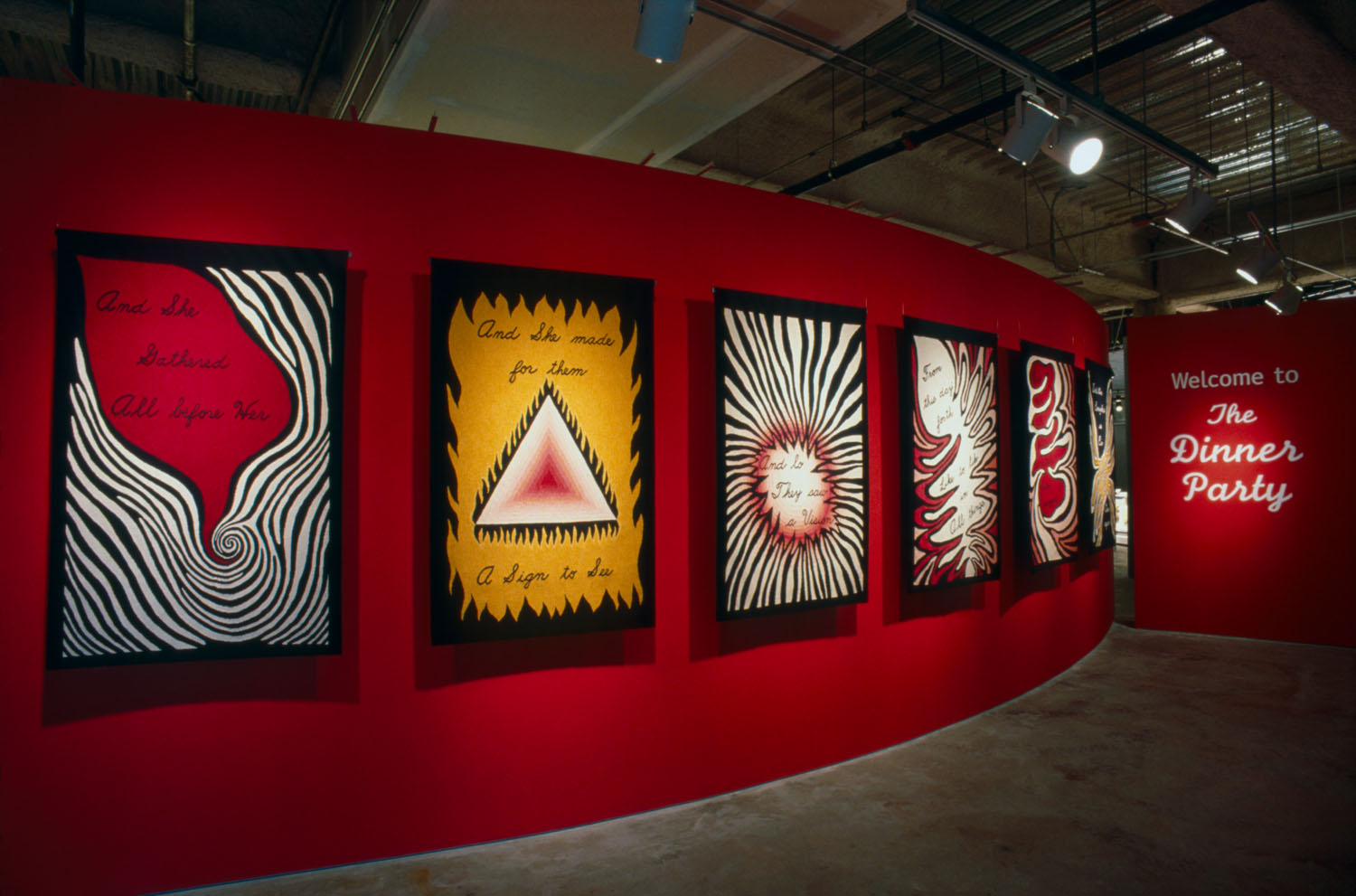 This was a controversial work of art because some of the sculpted plates on the dining table alluded to the female organ. Like any artwork, there were people who received it well and others that didn’t.

Feminist critic Lucy Lippard stated, ‘My own initial experience was strongly emotional… The longer I spent with the piece, the more I became addicted to its intricate detail and hidden meanings’, and defended the work as an excellent example of the feminist effort.

‘The Dinner Party reiterates its theme with an insistence and vulgarity more appropriate, perhaps, to an advertising campaign than to a work of art’, Hilton Kramer said.

Maureen Mullarkey criticized her work, by saying that she found it disrespectful to the women represented in the artwork, like Virginia Woolf and Emily Dickenson, that the use of the female sex organ was an untrue representation of who they are.

There was even a satirized version of “The Dinner Party”, by Maria Manhattan titled “The Box Lunch “, where it was ‘a major art event honoring 39 women of dubious distinction.’

However, this work is important because it was considered the first epic feminist artwork and I guess like any art, there are bound to have people who like or dislike it. What is important is that it raises an issue that challenges our view on it. 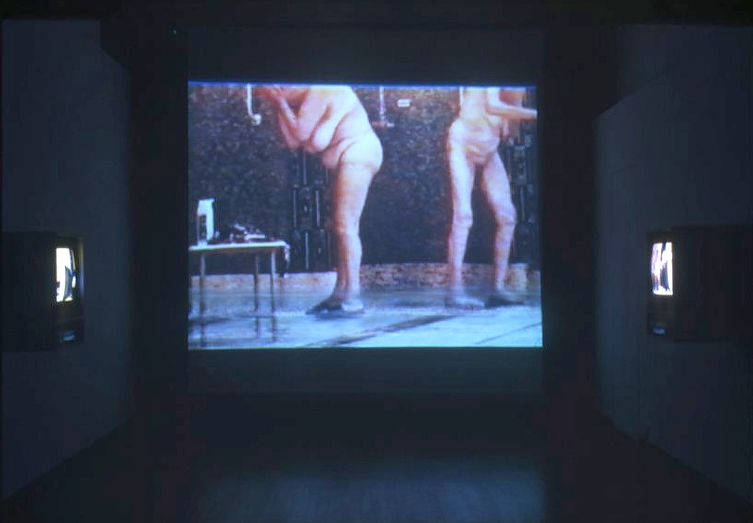 In her famous work titled Bathhouse (1997-1999), an installation piece with one video projection and 5 images on video monitors, Katarzyna wanted to show the raw and real version of women’s body in contrast to mass media’s portrayal of women, something we have all grown accustomed to seeing. This piece was awarded the Honorary award at the International Art Biennale in Venice.

‘Her video of overweight, aging, imperfect female bodies is astonishing in its realism’

She stated in a conference that ‘I like the idea of showing women and their bodies in a way that is different from what I was used to in art history and also movies and also tv commercials.’ She went into a bath house and secretly filmed the women who were in there for about 20 hours and the reason why she decided to do it in secret was because she knew that if she told them, the women will feel uncomfortable and unnatural.

(you can watch from 6:33, when she talks about the bath house piece.)

With this piece, I think it was controversial because it challenges our ideas of what we see on screen. When we watch movies or see commercials, whether the women are unclothed or clothed, we rarely see such an image on screen, with so much imperfections (but ain’t we all).  and in such a natural and comfortable state, unlike the media where everything is orchestrated and made to perfection. Which brings me to my next point, that the reason why the women were so comfortable and casual is because the artist was filming in secret, without the knowledge, capturing a rare sight that is not really shown in the media. With that, I think it also challenges our normal considerations of privacy.

Following this art piece, she had another, The Men’s Bathhouse, where she disguised herself as a man and filmed them.

The late Hannah Wilke was one of the well known feminist in the art industry, with her provocative art works, that often uses her body as an object and using herself as the art work, the piece Gestures was one of her well known pieces. An installation video that lasts for about 30 mins, with a video that featured the artist sculpting her flesh (face) with her hands – enact this reclamation by proposing the artist’s own body as an artistic medium.

There is this sense of intimacy and something that is unnerving, as if the audience is not supposed to be seeing her do this. ‘The length of the video sometimes makes it uncomfortable for the viewer as these acts of self-exploration feel almost too private for the camera; the viewer becomes a sort of voyeur.’

In this piece, she is putting herself on display, putting herself as both artist and the art object, ‘going through the process of exploring her face for the viewer who cannot do it themselves’.

The controversy that came with her work was that they felt that she was just perpetrating the concept of the ‘male gaze’ and reinforcing the objectification of the female body.

That’s the end of my research, and it was definitely interesting to see how different female artists approached their works and bring out the theme of feminism in their pieces, something that I hope to think about and explore in the final project!