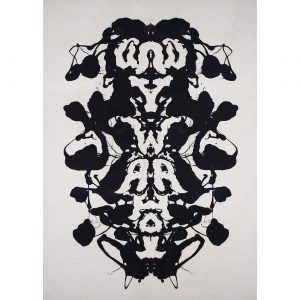 I was very fascinated with this. The ink blot test has been around since the 1920s when Swiss Psychologist Hermann Rorschach came up with this. I found it interesting how Andy Warhol adapted it and made it into art pieces because to be frank, they are beautiful. There is always something quite unsettling whenever I see a rorschach design but yet, something so beautiful and mesmerising about it. Andy Warhol was all about abstract art and the funny thing was that when he created these art, he had the mentality that the patients were the ones who would come up with the ink blots and that the psychologists would then interpret it.

What I really like about rorschach is that no one piece will be same, which then makes every single art unique and one of its kind. I also think that the psychology aspect of it tying in with art is something really interesting. The outcome and interpretation then may be different for each person because everyone may see something different and the art then becomes fluid.

One thought on “Artist Reference”