For our homework this week, we needed to do 3 different storyboards for the script that we wrote for our friend. We had to make them different, challenging what we would naturally do and making us think about how we can create different compositions.

So I did these storyboards initially, but after gathering feedback from Jesse during class regarding my shading, I decided to do the shading with markers this week 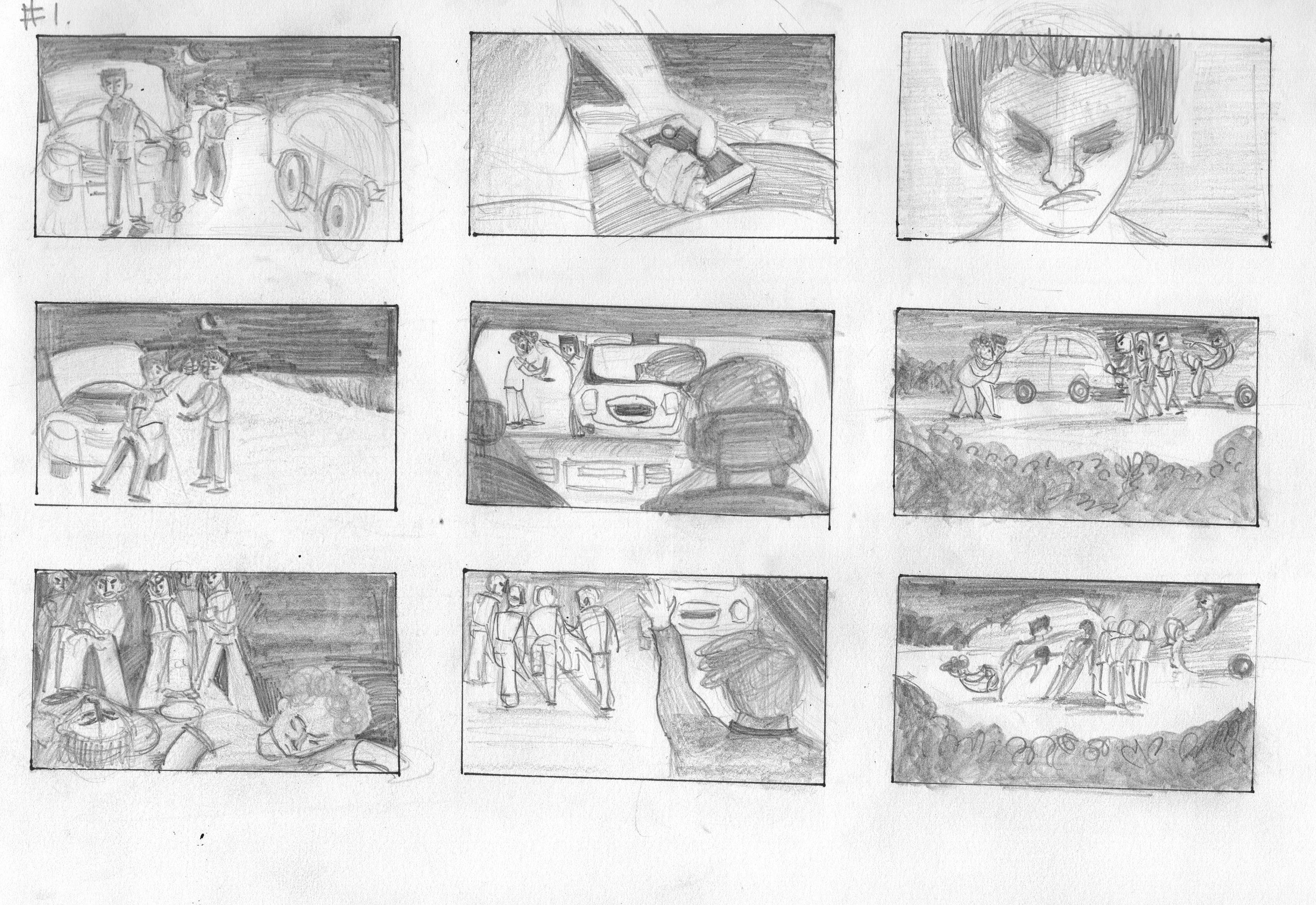 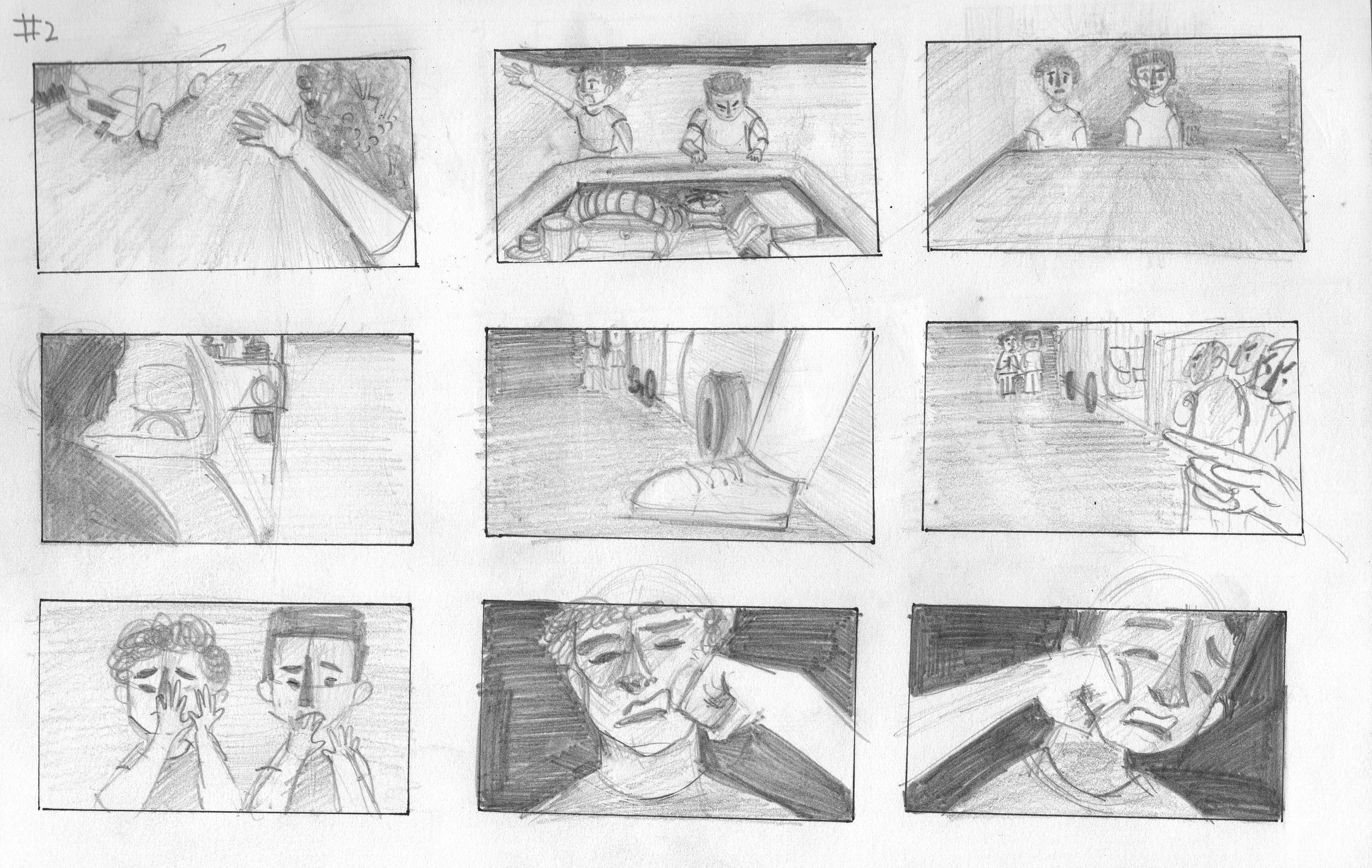 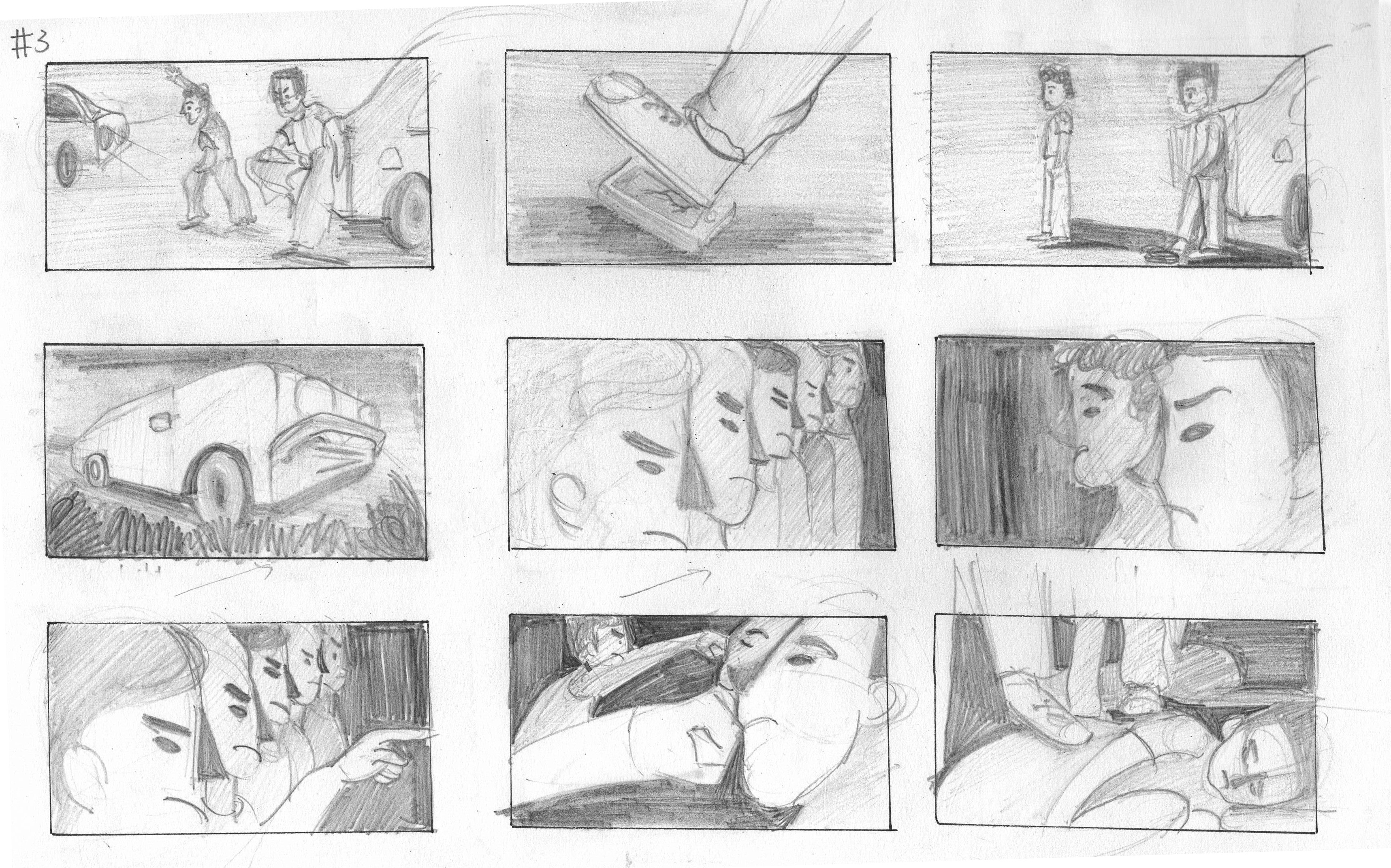 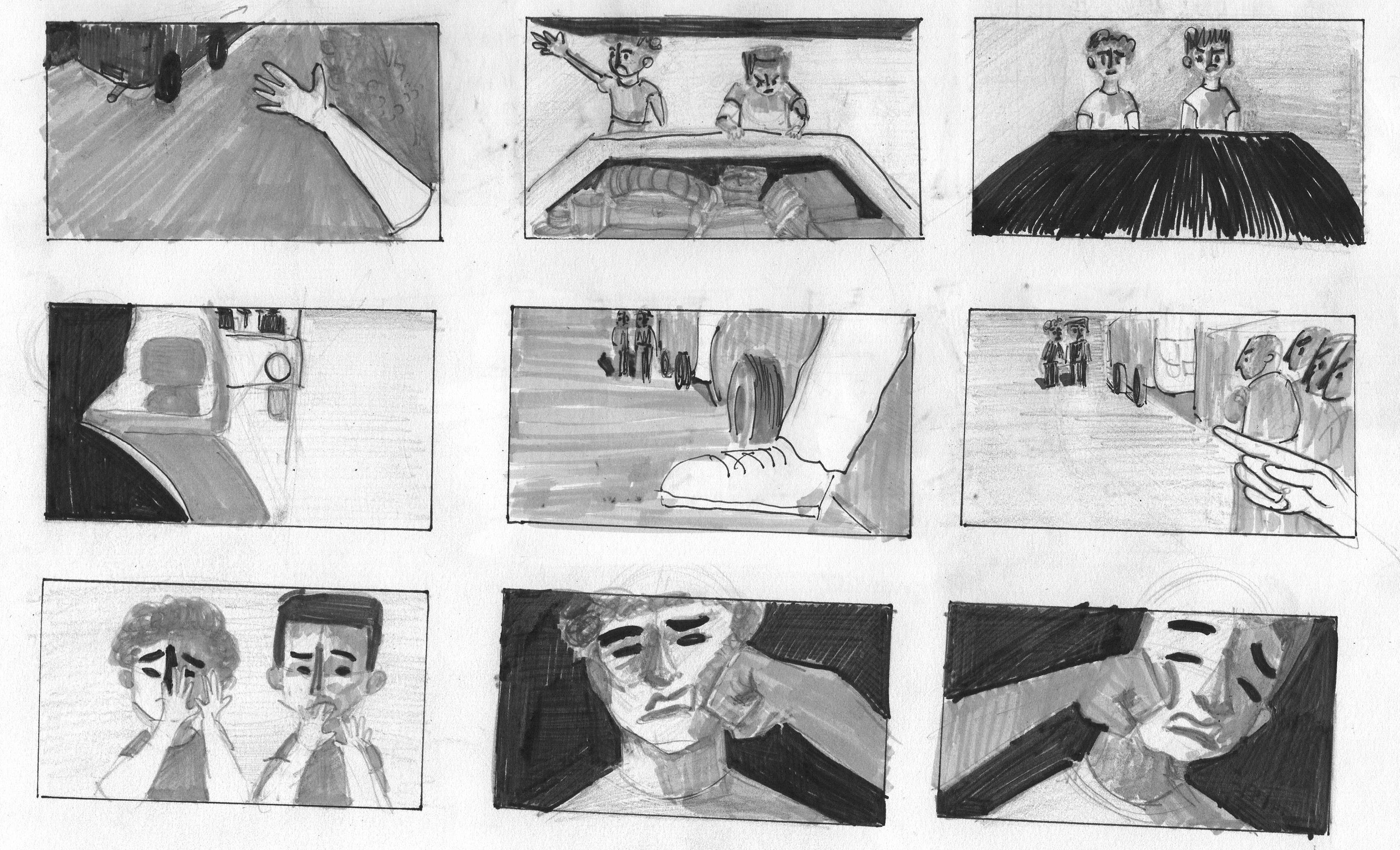 For my second attempt, I decided to try something different, telling the story with the focus on the 2 brothers. I realized from my first set of storyboards that I was trying to squeeze too many things into the frame and that could make it distracting. I thought about how I can portray the scenes and allowing the audiences to infer what is going on (especially in the opening for the sequence). What I decided to do was to start of the 2 set of storyboards with just a hand waving, and a car passing by. This is different from the beginning of the first sequence because what audiences would be faced with questions first like “Who’s hand is this?” or “What is going on? What is the context?” It cuts to the 2 brothers with the camera in the car bonnet, answering the questions that the first shot might have raised. With this shot, audience should be able to infer that the car has broken down, without needing to show the long shot like before. Seeing the reactions of the brothers looking up to see something in the distance rather than showing the audience that a car is approaching might also be more effective and so I decided to focus on the both of them. This cuts to an over the shoulder shot, showing a car approaching and stopping behind their car. I was hoping that with a low angle shot, it would make things more dramatic and create mystery as to how the character looks like and all these while making sure that the 2 brothers are in the shot. Once again, just revealing the body part of the character, he points at the brothers, summoning his team of men. I wanted to once again focus on the reactions and emotions of both brothers and this is where its really different from what I had previously where the fight scenes are close up shots, focusing on one main action. Even when they have landed on the ground, to keep it consistent, I decided to place them in the foreground, with the audience viewing their demise with their faces right at the camera. Even when the brother retaliates, the close up shot is still kept. The shot then cuts back to them walking towards the mysterious man, which is the same composition as the “finger pointing” scene. For the last shot in the sequence, I decided to have the leader hold the conversation through the mirror with the 2 brothers, which I thought could be more interesting than my first sequence. 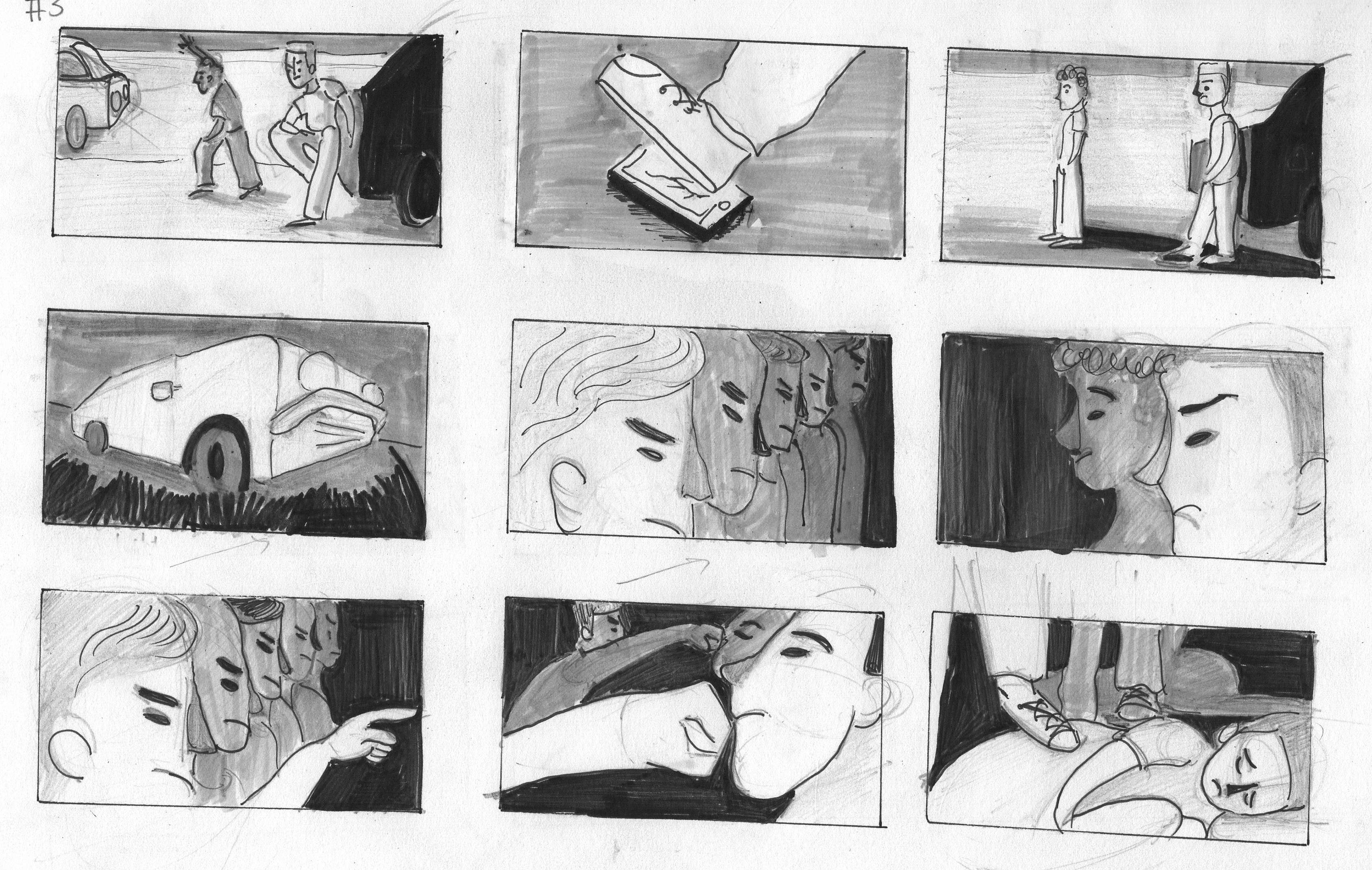 Moving onto the last sequence, I was thinking about how else I can do this and something that I thought about was focusing on one brother and I thought about how the shots will look like if the focus is on one brother and the other brother is secondary. So for the opening shot, I decided to place the main brother in the foreground while the other brother in the mid ground. It then moves to a close up of the stomping of the phone, conveying frustration and agitation. We then see the brothers looking at something that is happening off screen on the left. It then cuts to a low angle of a car entering and stopping. I wanted this to look dramatic and daunting. I thought hard about how I can introduce the 5 men who were in the car and I thought that they could line up, with the leader among them in the foreground, just like the main brother, emphasizing the importance of this charcater. And doing the same line up idea for the brothers too. With these frames, there are also clear diagonals. Cutting back to the same composition but now with the main gang member pointing at them and having the next frame a close up of the brothers being punched off screen. I thought that playing with that idea of side profile was interesting and could make it more interesting. Since the focus is on only one brother, he is placed in the foreground. As I was doing this, I decided to focus on just the legs of the members because it isn’t really crucial to have their faces seen, but more important for the audience to focus on the main character. We then see a close up of the raised hand of the gang member, signalling to stop and then cutting back to the same composition as before (for continuity). Since most of the shots in the third sequence are side profiles, I decided to just continue using the side profile for the punch. I thought about how when the brothers were being kicked, only the legs of the gang members were seen and so for the following shot, I decided that I will show the gang member on the floor from the back view of the brother’s leg (maintaining the screen left and screen right positions in the previous shot). Going back to the side profile, the members hold them and lead them back to the car. For the closing shot, I thought what would be interesting to try would be seeing the conversations they have through the side mirror of the car.

In summary, things I realized while doing the 3 storyboards: