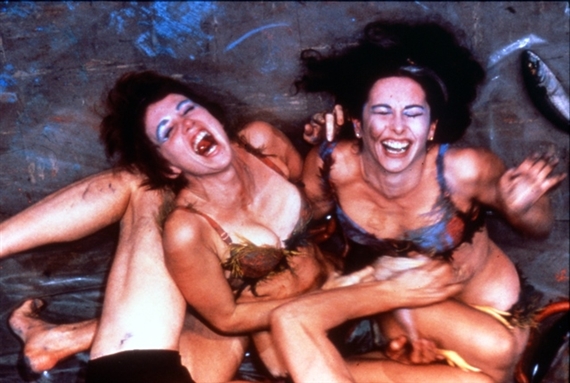 During the duration of this research, I was somehow attracted to art works that explore the concept of female sexuality using body and female sexual organ: vagina.

I was introduced to the artist, Carolee Schneemann with the work Meat Joy. This group performance involved eight men and women, scantily clad, playing with sausages, raw fish, raw poultry, wet paint, transparent plastic, ropes, scraps of paper, and one another to the pop music as the background.

This work led me to be interested in using female sexual organs as a medium in performance art. I wanted to be narrow in this research as it was interesting to see various ways to use vagina to express artists’ ideologies. 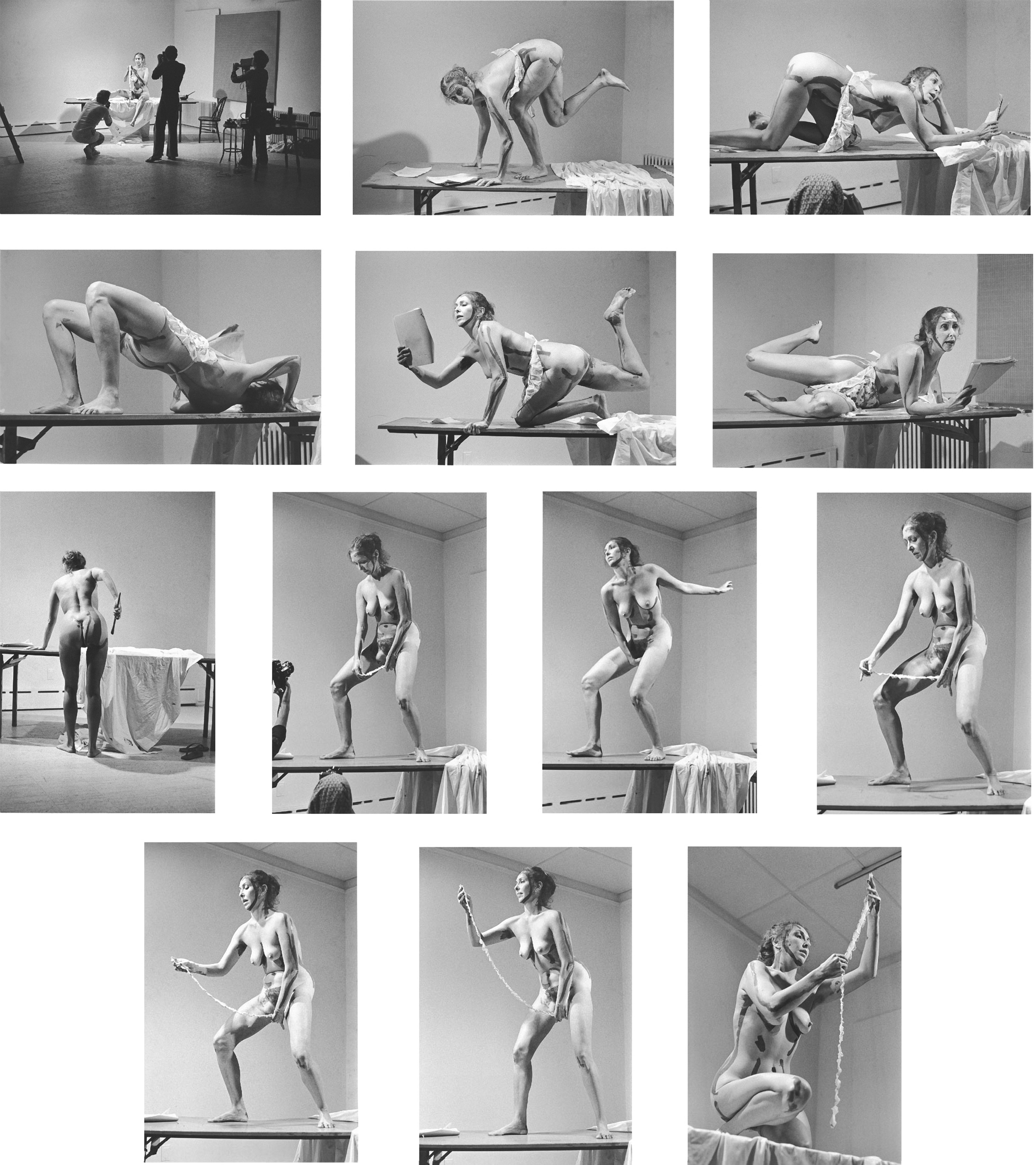 Thus, I had to look at Schneeman’s Internal Scroll . Schneeman stands in the center of the space only covered in a sheet and an apron. She climbs onto a table and outlines her body in mud and stood in pose – used in life drawing class. Then, she read a book Cezanne, She Was a Great Painter by extracting a paper scroll from her vagina. She said, “I thought of the vagina in many ways – physically, conceptually, as a sculptural form, an architectural referent, the source of sacred knowledge, ecstasy, birth passage, transformation.” In the period of 1970s, the art society was dominated by men and by bringing the key point of her work to female sexual organ, she managed to link artistic creativity with feminist exploration of her body.

During my research, I did not come across works using vagina in the period between Schneemann and the artist Casey Jenkins. Thus, I will jump through the time to 21st century. The notion of using vagina as a medium that challenges female sexuality also became personal and intimate. Rater than shock or direct protest, Jenkins brings this concept to more calm, slow and meditative.

Jenkins knitted for 28 days with the ball of wool inserted inside the vagina. She goes through menstrual cycle during this month-long performance and the evidence of it is vivd on the rows of knitted wools. Jenkins says, “If you take a good, hard look at a vulva, you realize it’s just a bit of a body. There’s nothing that is shocking or scary, you know, nothing that is going to run out and eat you up.” and that “The piece for me is about assessing and being intimate with my own body.” She rather challenges the negative perspective of vagina by associating with knitting which is viewed as motherly and warm activity.

The reaction was rather odd for me. It received millions of views and was harshly criticised by the public. The response to the clip was negative, marked with fear and repulsion. Words such as “ick”, “eww”, “gross” and “whyyyy?” were immensely used. Moreover, the public, rather than focusing on the core concept of the work, criticised her face instead.

Jenkins wrote: “Commentators seem to be genuinely outraged that I would dare to do something that they view as strange and repulsive with my body without displaying shame. Women putting themselves forward in any capacity in the world is frowned upon, and for a woman to put herself forward in a way that is not designed to be attractive or pleasing is downright seditious. People are incensed!”

And that most of the comments labelled her as “attention-seeker”.

“As the deafening response to my work demonstrates, there is a hell of a lot of clamouring noise in society about what a person with a body like mine should and shouldn’t be doing with it.”

She ends off the article, “I have hopes that after the noise of the visceral reaction dies down on the web, people might take time to consider why they responded the way they did. That they will stop trying to dictate what I do with my body and spend some time contemplating why they feel such a strong need to do so.”

When I read this article, I found it so odd. When I watched the video, I was overwhelmed by the sense of serenity. I guess that still in this society, using woman’s genital organ is still considered societal taboo and by using vagina as the foundation of art, it is still considered bringing shame to the artist as well as her body.

This work also caught my eye in different way compared to Jenkins. De Robertis took off all her clothes and laid on the floor in front of Edouard Manet’s celebrated painting Olympia and adopted the same confident, staring pose as the reclining nude in the 1865 Impressionist portrait in the Musée d’Orsay. She was in police custody for two days because of this.

Prior to this, De Robertis sat in front of Gustave Courbet’s far more revealing canvas, The Origin of the World in the Musée d’Orsay. Like the woman in the portrait, she exposed herself.

The public reaction, well at least the visitors to the Musée d’Orsay, was varied from Jenkins. De Robertis said “The public were completely on my side,” and that “Anyone who objected could just have left the room, but no one did. The museum security guards ordered me to get dressed and, when I refused, they called the police.”

The fine line between the nudity in art and public nudity is unclear. Even in the space of white cube, when the work is online, it goes viral and receive public rage. It is hard to know the public reaction to Carolee Schneemann’s works as it predates to before internet where public reactions are recorded. However, I imagine that the understanding is rather the same and that the idea of using female body as medium of art is still perceived from the masculine dominated ideology.

I think that it is important to be aware of perceptions that are dominating the society. Only when I am aware of the preconceived notions, then I’ll be able to analyse and challenge these notions.