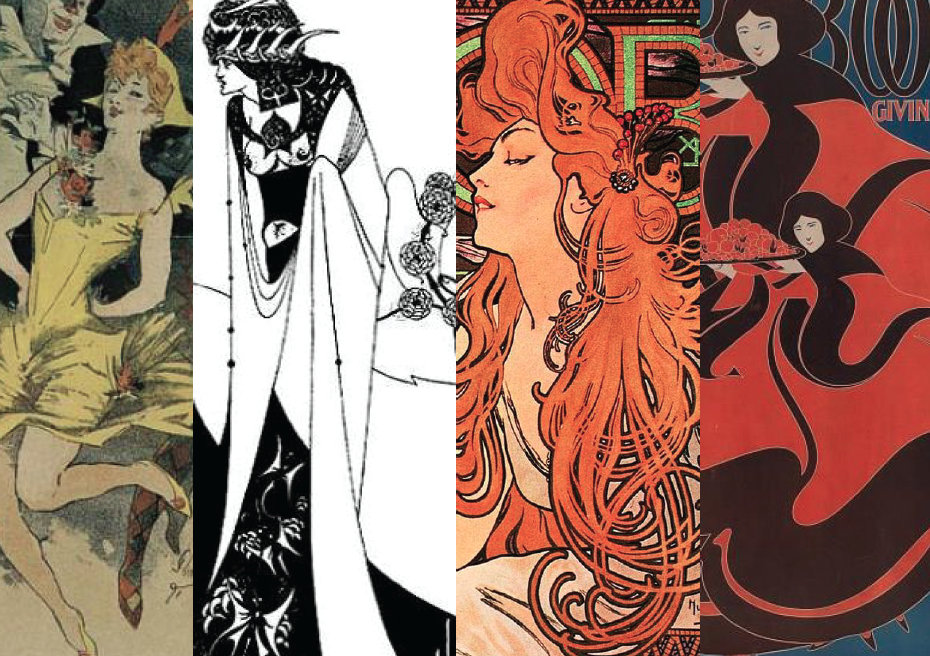 For this post, I would be looking into the representation of women in print (posters, newsprint, etc). As Jules Cheret (1836-1933), the father of modern poster may be considered as the man to change the perspective of how women were viewed and displayed in print and posters, I would like to categorise this post into three segments:

When art nouveau came into Europe, it was glaringly obvious that its art representation in posters had several influences from Japanese wood block prints. Ukiyo-e, meaning pictures of the floating world, was an art movement of Japan’s Tokugawa period (1603-1867). The artists in this period embraced the woodblock print. One such artist was Hishikawa Moronbu (1618-94), who was known as the first master of Ukiyo-e print. And perhaps we have him to partially thank for all the beautiful works of art that followed, in Europe and then spreading to America. As the technique of woodblock printing was slightly tedious and technical, the choice of colours and lines and patterns were very important. And only until the last colour of paint is applied can you properly see the formation of the entire work. All of these added to its beauty. However, as the focus should be on the representation of women, I shall tear myself away from the aesthetical beauty of this woodblock prints and solely focus that.

Women were seen to be demure, gentle, having their head reclined, soft demeanor, and in some wood block prints, involved in manual labour. But rarely were they seen to be smiling, doing something spontaneous or appearing more expressive. Even in the erotic versions, the men appeared to be the one in control, with stronger body language and movements. Although Japanese wood block prints are capable of capturing a slice of time, presenting something that is in the moment, the women were portrayed as being stiff (such as Hokusai Gashiki 1819, Kitagawa Utamaro, portrait of a courtesan, late 1700s.). Yes, she does appear tall and graceful but also looking down at the ground, and looking almost still. However, this is not a negative incline towards the way women were perceived in art in japan at that time. This is purely observational. This is because it could also be credited that the women in Japan at that time were indeed presenting themselves as very gentle and soft creatures. So for that period, it could be said that it was an honest presentation. Hence, this is purely observational, of how women are represented in prints.

Firstly, a huge gratitude should be placed upon the demolishment of the French law concerning freedom of the press. This allowed for the exposure of Jules Cheret’s works and its safe to see we are all thankful for that. He was “convinced that pictorial lithographic posters would replace the typographic letterpress posters that filled the urban environment”. He changed and revolutionized the perspective of women. A wonderful example would be his Elysee Montmarte Ball Masque Poster, 1896. The women were seen to be carefree, graceful, and spontaneous and in this poster design, it can be seen that the woman is dancing with the same energy as the man. His representation of women, Caters as they were nicknamed later did not appear rigid. In fact, they were candid and in the moment. This is similar to Ando Hiroshiges’ Evening Squall At The Great Bridge Near Atake 1856-59 where “a moment in time is preserved as a transient human event”. However, unlike most woodblock prints, the colours in Cheret’s posters were very vibrant. This could be perhaps to match the spontaneous energy of the women.

02b/ Slightly after but during Jules Cheret

“In England, the art nouveau movement was primarily concerned with graphic design and illustration rather than architectural and product design”. And perhaps, in my opinion, Aubrey Beardsley (1872-98) is one of the best in illustration and creating new forms of design. In most of his well renowned works, women were displayed in black and white silhouettes (silhouettes, which is a common factor in woodblock prints. The use of strokes was clean and clear. Women appeared to be delicate and elongated. They have a slight impression of gentleness, however it was not as demure as the versions of Japanese prints. Their facial expressions were not bright and merry as Charet’s works but their body language were subtle yet loud. This for instance can be seen in the seductive language between two women (Morte d Arthur’ full illustration 1893) or their exposed garments, such as in the illustration for Oscar Wilde’s Salome 1894.

Here, I will explore what the future of women representation may be. In Alphone Mucha’s (1860-1939) works, women had a realistic form, such as in terms of their faces and figures but there was an emphasis on organic shapes, creating something closer to mystical and indulging in the whiplash effect. Due to that, the women had a “archetypal sense of unreality. Exotic, sensuous, yet maiden like. Expresses no specific age, nationality or historical period.”

Perhaps formless versions of women? This is in close relation to Will Bradley’s Poster for The Cheap Book, 1895. Apart from the face of the women, their silhouette and body figure is formless. It is organic and fluid. And with the gender segregation becoming more and more fluid, perhaps this is the next step to gender equality and liberation? Posters as this and Henri Van De Velde’s Poster for Tropon food concentrate 1899, the focus of the posters are not very clearly displayed. They are subtle and need to be “dug” out. These are thought provoking posters. And why not have a future with more posters like these, right?

Right now popular works with women representation are explicit, enhancing the female body and sexuality. (Almost similar to Beardsley’s works but less subtle) These works are unafraid and unapologetic. This is an attitude I hope to see in the future of posters, but perhaps with a slight twist to it?

If formlessness is too much of a stretch for the future, I at least hope that the works of the future representing women would be similar to Charles Rennie Mackinstosh poster for the Scottish Musical review 1896. (Rectilinear art nouveau). They are tall and elongated women. Almost like they are standing in a pedestal and the viewers are looking at them from a lower height. Looking up at them. It is empowering. And we need for of that. Powerful, liberated women of the future.

"smelly cat, smelly cat, what are they feeding you?" View all posts by Hemani