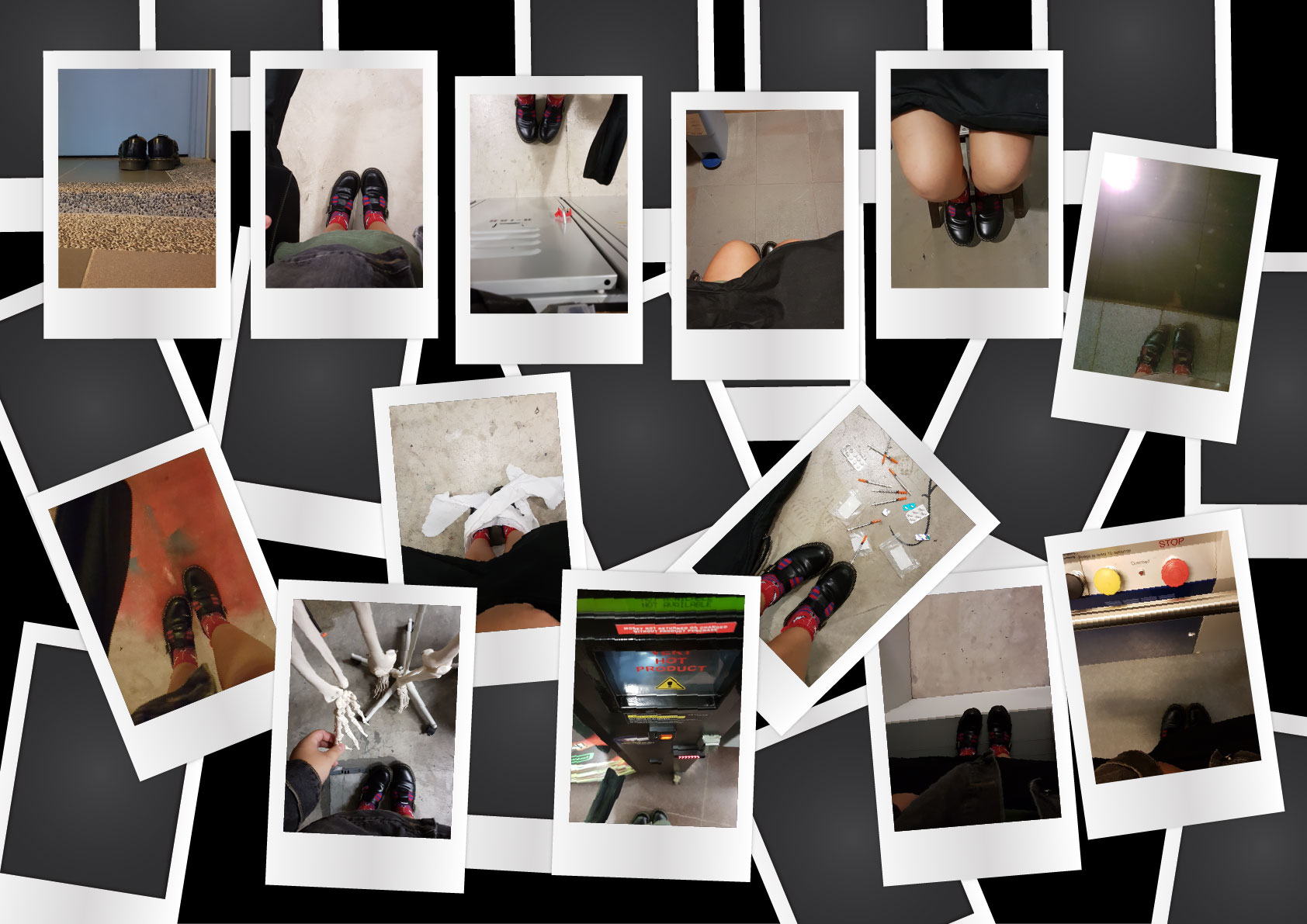 What I have for critique so far. MAY I PRESENT TO YOU MY FIRST DRAFT FOR ASSIGNMENT 2 *wild hand gestures directed at the work in question*
This is a terrible draft I am so sorry. 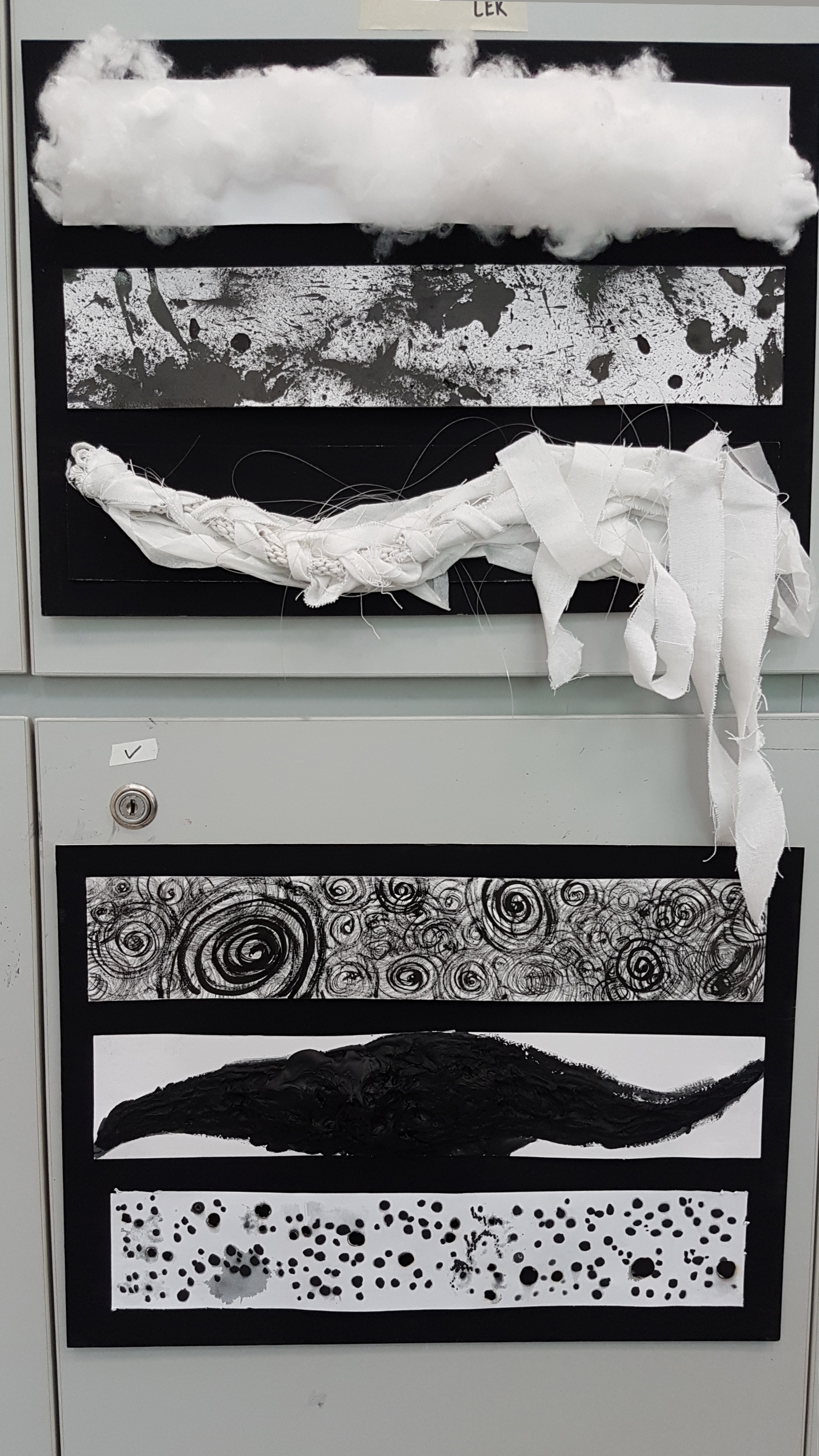 YAY WE’VE MADE IT TO THE END OF ASSIGNMENT 1!

Here is the final list of emotions I chose to do: 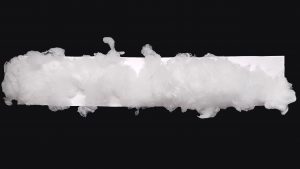 It was really hard for me to figure out how to present adoration as a visual. I still kept associating adoration with the whole idea of puppy love and all its related imagery. This is why in the end I decided to go with using cotton wool to create this piece. More specifically, the piece is made using a combination of cotton wool and pillow stuffing (No pillows were harmed in the making of this piece. I used some that I bought a while back from Daiso).Adoration, to me, was a very light emotion. It did not feel “heavy” like passion or lust. When I hear the word ‘adore’, I associate it with words like ‘gentle’, ‘soft’ and ‘tender’. This is why I decided to go ahead and use these materials to represent the emotion. As with every emotion, they ebb and flow. The change in the width represent this constant change. I knew I wanted to use balloons somehow in this piece but I was not exactly sure how. One of the things that I thought of initially was to attach balloons onto the strip of paper and then burst them in class, literally giving people a surprise, but I don’t think my classmates nor the lecturer would appreciate that. In the end, I decided to fill a couple of balloons with a small amount of ink and burst them over the strip of paper. As I knew this was going to be messy, I had this crazy idea to do it in one of the shower stalls so that I am able to easily wash out the ink splatters afterwards. And that is what I did. (At this point in time, I feel that I should give a quick shoutout to my roommate because credit should be given when credits are due. To my roomie, thank you for helping me knot the ends of the balloons, for coming into the toilet with me at 2 in the morning to create this piece as well as for helping me clean up the shower stall afterwards. YOU DA BEST!!!!!) The strip of paper was placed on the floor and balloons were arranged randomly over it. I then proceed to close my eyes and pop the balloons at random, doing so until I was happy with the results. 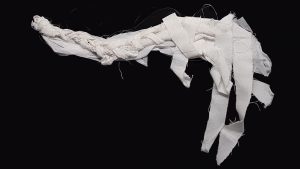 Originally, the emotion that I wanted to work on was Contentment (kindly please read my post on my process for Assignment 1 to know more about my plans for that). However, it kind of did not work out. While staring at the different strings and materials strewed across my table, this concept kind of came to mind.According to Google, sentimentality is “the quality or state of being marked or governed by feeling, sensibility or emotional idealism.”. To me, sentimentality is letting your current emotions cloud your memories. When we think back about what happened in the past, we don’t view it with the same pair of eyes or mindset that we had when we first experienced what had happened in the memory. Instead, we judge it based on our current state of mind. With that, it changes the way we feel when we look back upon that memory and might even let our current emotional state change the memory. And that is what I wanted to express in this piece.The piece is made up of tissue paper at the bottom to round out the general shape, several pieces of white yarn woven together to form a thicker rope which is then braided with strips of linen fabric and wrapped with nylon fishing line. To me, the memory is represented by the rope in the middle while the current emotions are being represented using the other materials. In the beginning, the other materials are just loosely braided around the rope and bit of the rope can still be seen, symbolising people reminiscing about the past. As we move along the strip, from left to right, the rope starts to get more and more covered up and finally when you reach the last part of the strip, the rope can no longer be seen. This symbolises how towards the end, our current emotions have already clouded that particular memory and that it is no longer the same anymore. 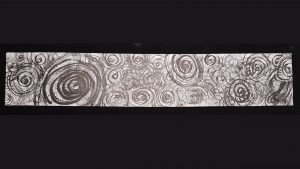 I went ahead with my plan, as detailed in my post on the mark-making process. I was actually quite satisfied with how it turned out although I did end up redoing it again because I was not exactly satisfied with the composition after staring at it for a while. Personally, it does make me feel a little unsettled. But then again, this is because I made the piece and thus the piece will always carry my significance and interpretation of it. The piece was made using Chinese ink on paper. I used a dry medium sized flat brush to make the faint spirals in the background first before using a small detail brush and flat brush to continue making spirals of different weight and thickness across the strip of paper.To me, the light spirals in the background symbolises the times when I am able to get my anxiousness in check and not have it spiral out of control, which is why the lines are faint and the spirals are slightly cropped. The darker spirals then present the times when maybe I am under a lot more pressure and the feelings of anxiousness is a lot more intense. The size of the spiral represents my perceived lack of control. The larger it is, the more helpless and out of control I felt. 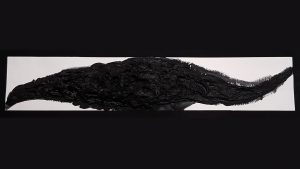 To me, grumpiness is relatively mild as compared to other emotions such as rage, fury, wrath or spite. Personally, even when I am feeling grumpy, I try as much as I can to not show it outwardly. As such, when thinking about what can possibly represent grumpiness, I thought of simmering water. If we were to take boiling water as anger, simmering water would be perfect to represent grumpiness. If you were to agitate a grumpy person, grumpiness would give way to anger, fury or even rage. Just as if you continue to boil simmering water, it would soon become a rolling boil. And that is the idea that I wanted to express in the piece.This piece was made using toothpaste mixed with black gouache. I smear the mixture onto the strip of paper with a brush first, in the rough shape that I want the piece to be in, before leaving it to dry up slightly. Once it has firmed up slightly, I used my fingers to create swirls, peaks and indentations to create the effect of simmering water. Initially, I was going to use black acrylic paint together with toothpaste or even black paint mixed together with craft glue. However, after experimenting with the different mixtures, the one that gave the effect closest to what I wanted was black gouache mixed together with toothpaste. It took quite a long while to dry but at least it made everything smell minty fresh 🙂 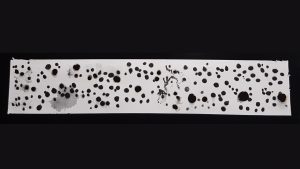 I went ahead with the plan I had as mentioned in my process post though things did not quite go according to plan. On hindsight, I should not have used a heavier piece of paper to do the final version. The cigarette took quite a while to create the burn marks, making this piece one of the more time consuming ones to make. Also, it was a terrible idea to scan the piece into the computer and render it black and white before printing it out and mounting it on a black mounting board. The actual holes in the piece blended in with the now-black burn marks and it just made the whole piece look underwhelming, unimpressive and just crappy in general. However, it was all that I have and I did not have time (nor the resources to get more cigarettes) to redo the piece. Note to self, for future projects, PLEASE HAVE BETTER TIME MANAGEMENT!
The piece started out with me using a lit cigarette to create burn marks or even holes in the paper. The longer I held it, the bigger the mark was or eventually, it becomes a hole. To create a bigger hole, I just had to gently blow at the ambers to allow it to continue burning away at the paper before blowing at it a little harder for the ambers to burn out. Once the whole paper was filled up, I scanned the whole thing into the computer, rendered it in grayscale (another mistake, should have made it fully black and white) before printing it out. I then went back in with an incense cone to re-create the holes and went back in with a brush pen to darken the burn marks.The symbolism behind the different sized burn marks and holes is that each of these represent how much “self-harm” we inflict upon ourselves when we feel guilty. The more you let the guilt eat away at you (represented by how long I held the cigarette to the paper),  the larger the burn mark, till finally the cigarette burns through and it leaves a permanent hole there. To me, it is a reminder to myself that one must come to terms with their own past. I have done a lot of things that I regret but there is no point in beating myself up each time I think about those things and let them prevent me from trying my best to live in the present.

General Reflection:
I think this project has been a really interesting one and I really did enjoyed the whole process of completing it. I love experimenting with different kinds of materials and textures and it was fun trying to use all kinds of materials lying around, to try to make a mark. If there is one thing that I have learnt, it is that I still have a long way to go in terms of learning how to better express my ideas, be it verbally or through visuals, as required by this assignment. And I really do agree with what Athirah said in class yesterday about how this project forces us to come to terms with ourselves. I think through the project, it reveals our thoughts, feelings and how we process the world. Each piece carries our opinions and feelings, translated into visual form, and now shown to the world (or at least, just to the class). As I sit here writing out this (really long) post, I feel almost vulnerable, revealing so much of my thought process onto the internet. All in all, it has been an interesting first assignment and I look forward to the other assignments coming my way.