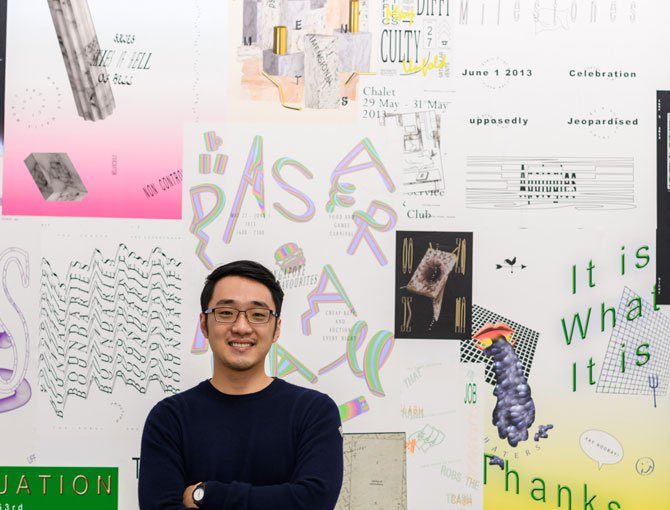 Darius Ou is a Singaporean graphic designer and the founder of his own design practice, Studio Darius Ou, as well as Currency Design, together with Melvin Tan. He first rose to prominence because of his self-initiated project, Autotypography, where he created one A4 poster a day, using it as a visual diary of his day-to-day life. This project subsequently allowed Darius to experiment and further push the boundaries of what is considered “good design”, employing a lot of pop culture reference and kitsch elements in his subsequent poster designs.

Darius went on to form Currency Design, together with Melvin Tan (an alumni of ADM) in 2014. Their partnership lasted two years, during which they worked on several projects, including the branding for ADM’s 2016 gradshow. In 2016, Darius went on to set up his own practice, Studio Darius Ou. Since going solo, Darius has gone on to do a residency with Facebook’s Analog Research Lab, as well as working on both local and overseas branding projects. His most recent projects include branding for this year’s edition of the Hong Kong Art Book Fair as well as Resigning Mass, an artwork by Tristan Lim, which he collaborated on.

I decided to write about Darius Ou for a couple of reasons. Firstly, I thought that it would be nice to talk about a local designer for a change. In a climate where works are so easily shared over the internet, it is very easy for us to be exposed to international design standards. However, I feel that it is probably also important to take note of what is happening in our own local design scene and to celebrate the works of our local designers. Additionally, I had actually applied to intern with Darius over the summer and while I did not manage to secure an internship with him, I did get a very encouraging email from him and that is really nice considering how some studios don’t even bother responding (which also I know is standard practice but like that’s why it makes Darius’ reply a lot more meaningful I guess).
One thing that led me to wanting to intern with Darius (and also Currency Design) was their experimental approach to design. A quote taken from an interview that he did with Justin Zhuang for AIGA resonated with me:

“If we always follow the rules set by designers who lived in the 20th century—but we live in the 21st century—then what are we blindly following?”

After my second year, I was struggling a little with my design style and I started to wonder about all these design principles that were being taught to me. While I believe that these design principles are important, I believe that we need to learn how to experiment and to break these “rules” as well and that is something that I want to work on as I progress on (hopefully) in this career. 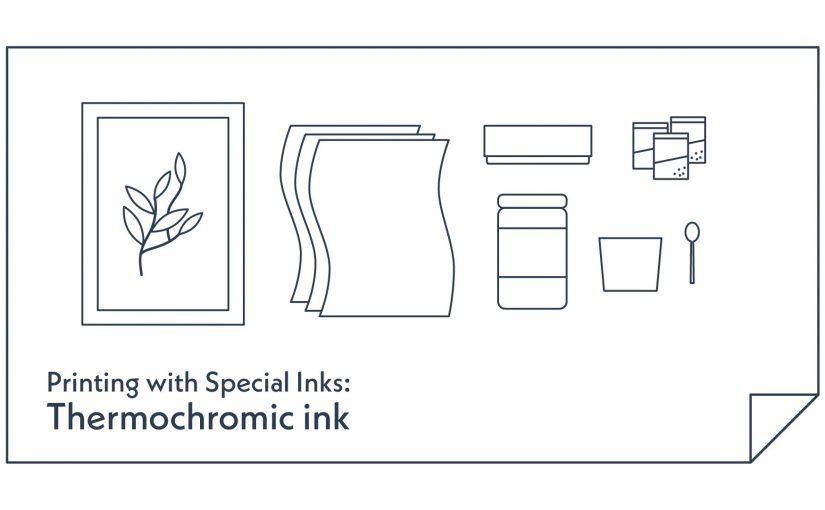 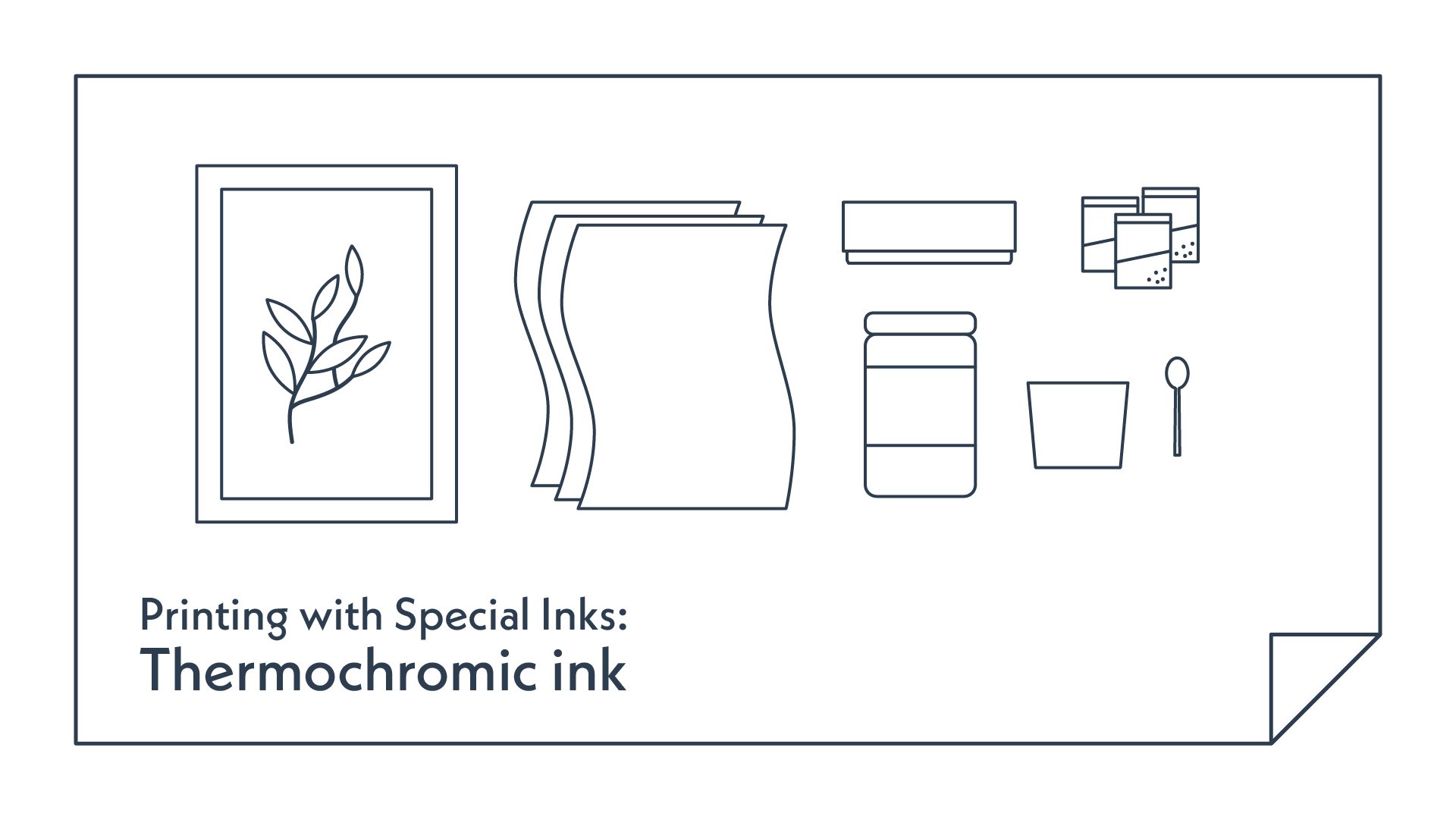 Thermochromism is the property of substances to change colour due to a change in the temperature. This can be seen in coffee mugs that reveal a change when hot water is poured into it, or mood rings. This adds a layer of interactivity to the product I suppose.
Thermochromic inks are not available in Singapore (a lot of art supplies are not available in Singapore Q.Q) and used to be only available from the States (?). However, Prof. Galina did mention that a senior did manage to find thermochromic pigment on Taobao so I guess, if I ever I want to work with thermochromic paint, future Louisa, I’ve got you covered. Go Taobao.
One general observation about the paints that we produced during class, for some reason they did not react as they normally would. The paint did not fade nor appear more vibrant when heat was applied (be it through the use of a hairdryer or just through touch). Not sure if this was due to the weather here in Singapore but I guess, it was cool to be able to do silkscreen printing again. Also because the paints I used were a little bit more pastel and my fabric was yellow (why did I choose yellow fabric and light paint I will never know. LOUISA WHAT HAPPENED TO YOUR COLOUR THEORY??), the colours were quite faint. 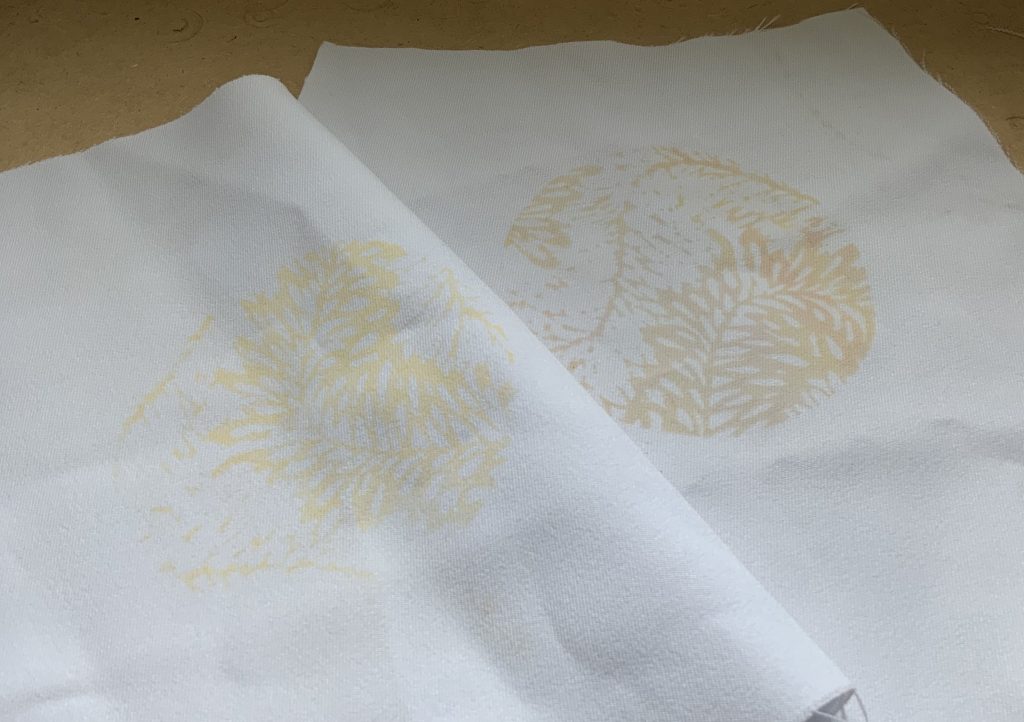 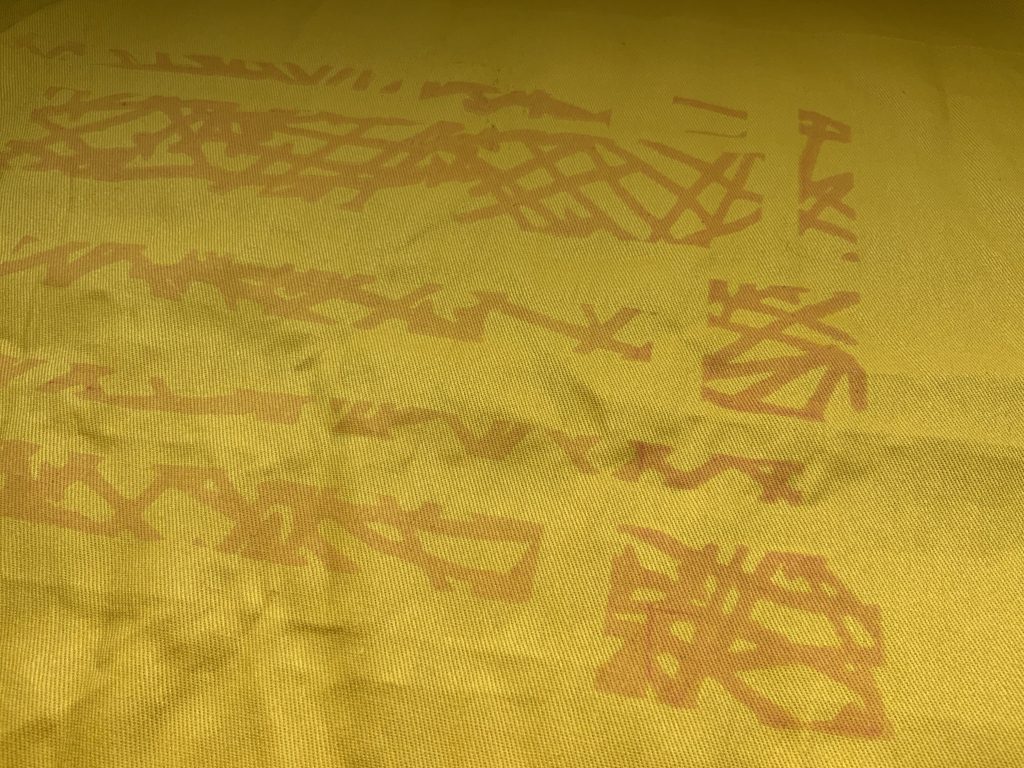 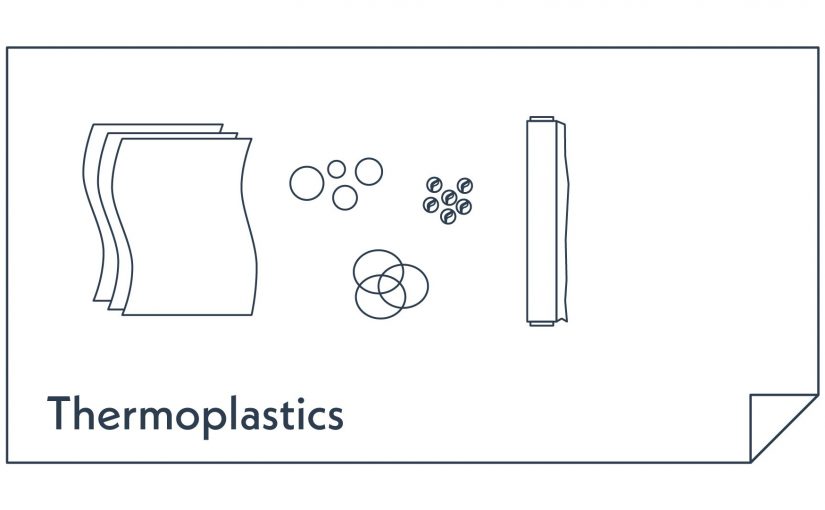 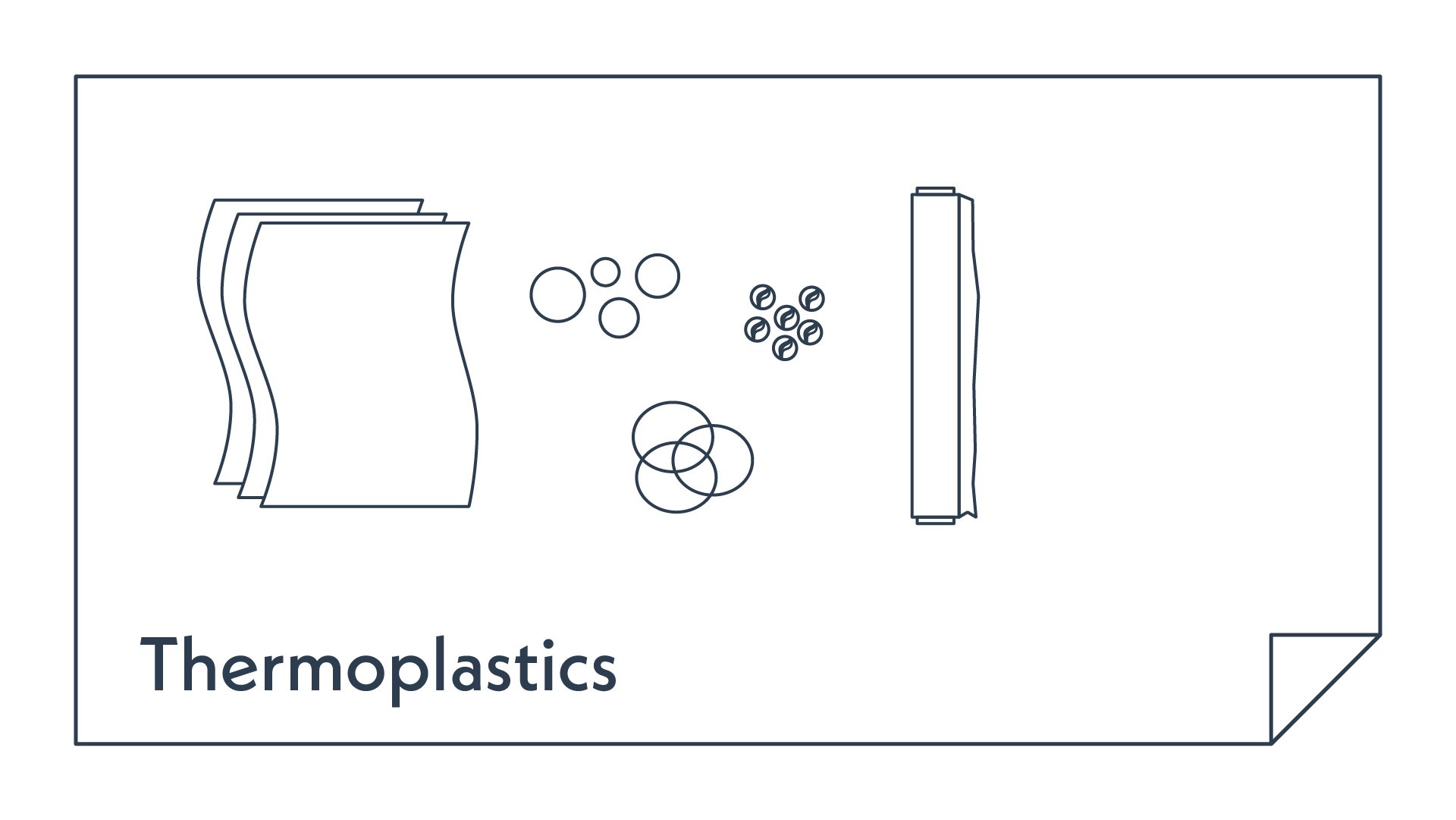 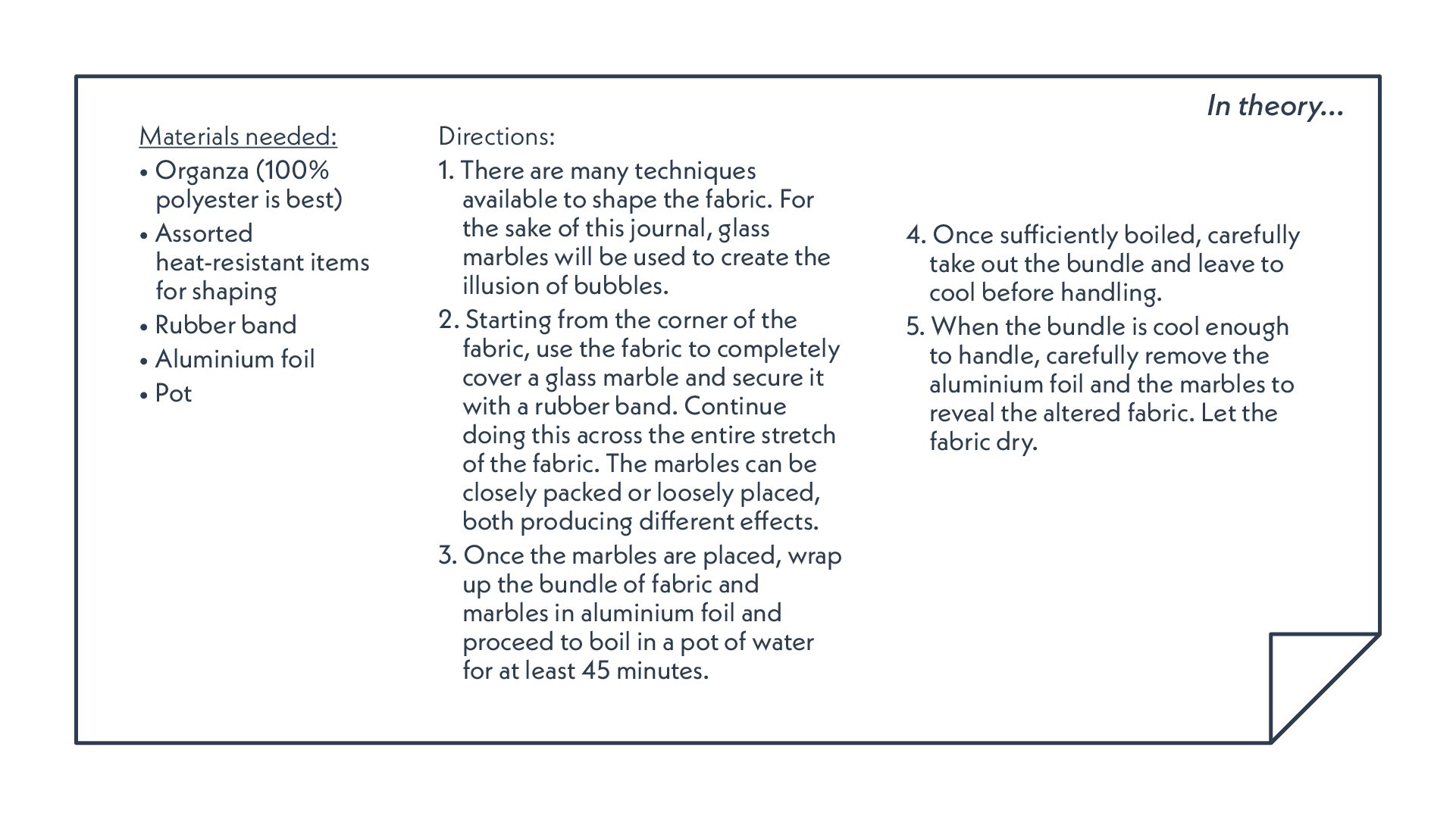 Note to self: TRUST YOUR INSTINCT!
I accidentally bought the wrong type of polyester fabric for this week’s class :’) And I can’t blame anyone but myself BECAUSE I HAD A GUT FEELING THAT THE FABRIC THAT THE SALESPERSON WAS PUSHING FOR ME TO BUY WAS NOT THE RIGHT ONE BUT I WENT WITH IT ANYWAY. Why am I like this. But in any case, that’s a lesson learnt. TRUST YOUR GUTS. And your professor’s fabric samples.
Thermoplastic is a pretty interesting technique that relies on the quality of the fabric. It might not be as accessible due to the fact that you have to boil this in a pot (and not be able to use the pot anymore for food and that is something that my mother is not okay with :’)) but it does produce fabric with the most interesting texture and effect. Prof. Galina shared several techniques, each with their own unique result. The result of each batch of creation might differ slightly (since this depends on the placement of the object in the fabric and you can’t possibly 100% place it back at at the same place and have the fabric fold around the object in the exact same manner) but I think that is the beauty of this technique. 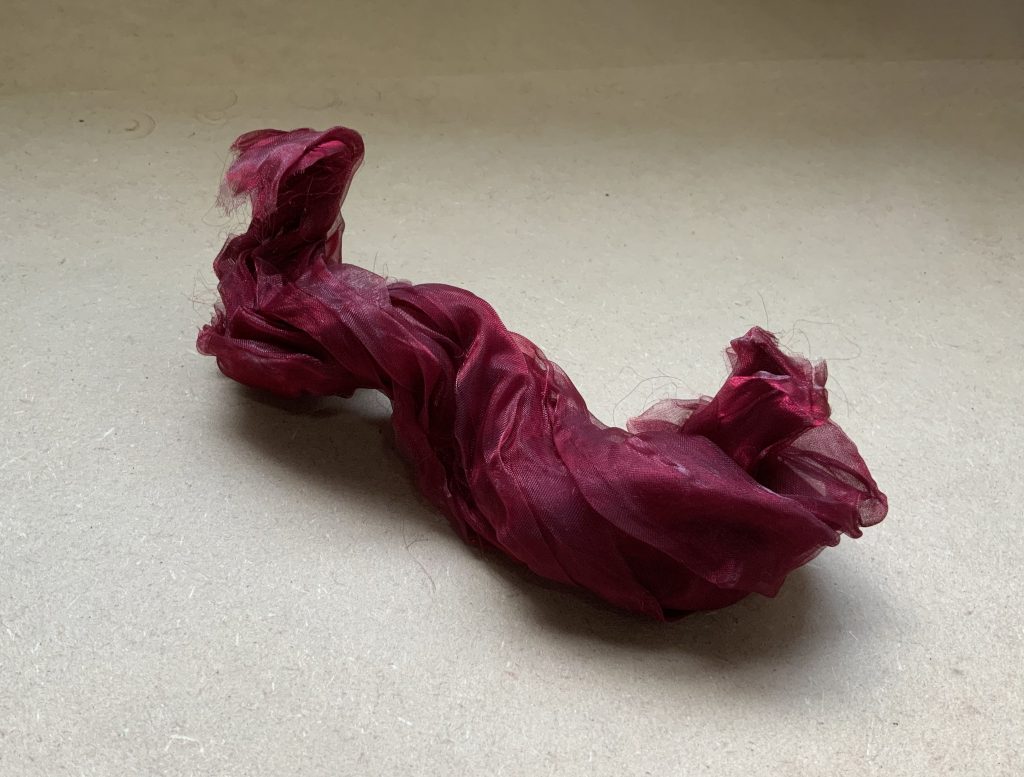 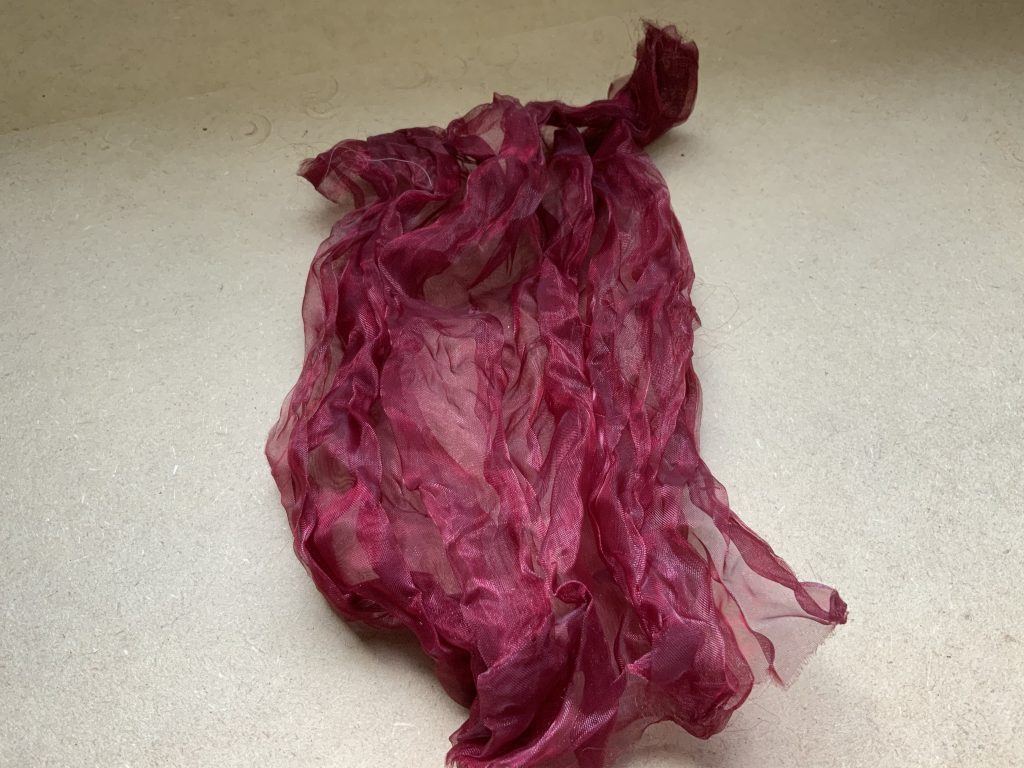 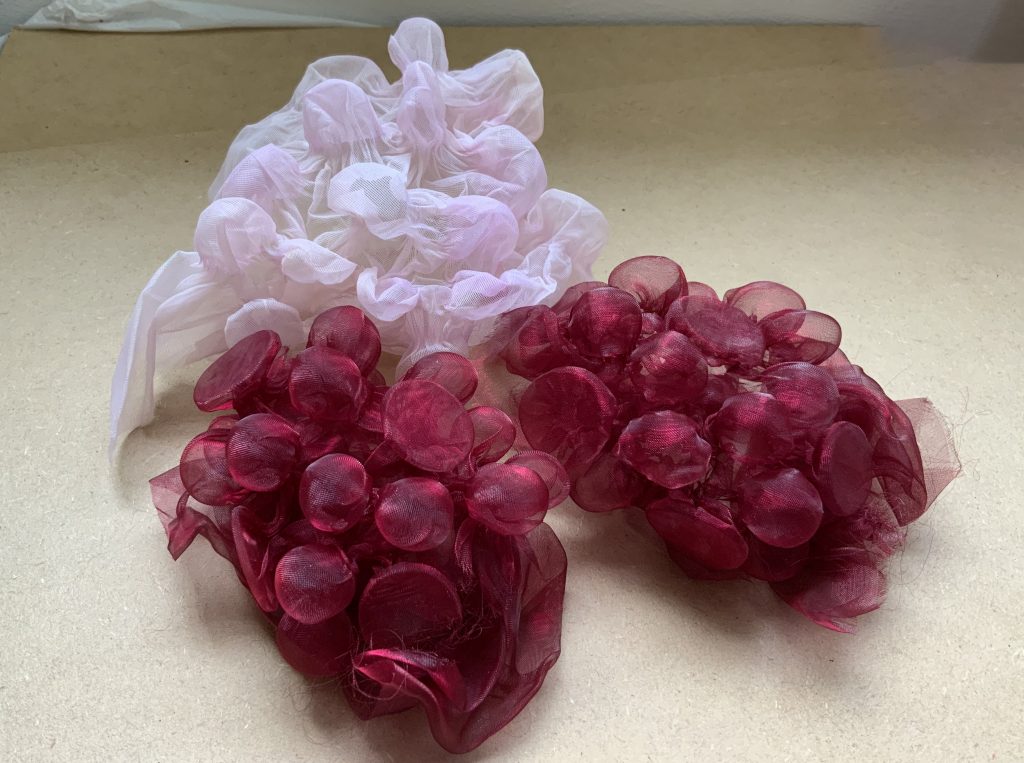 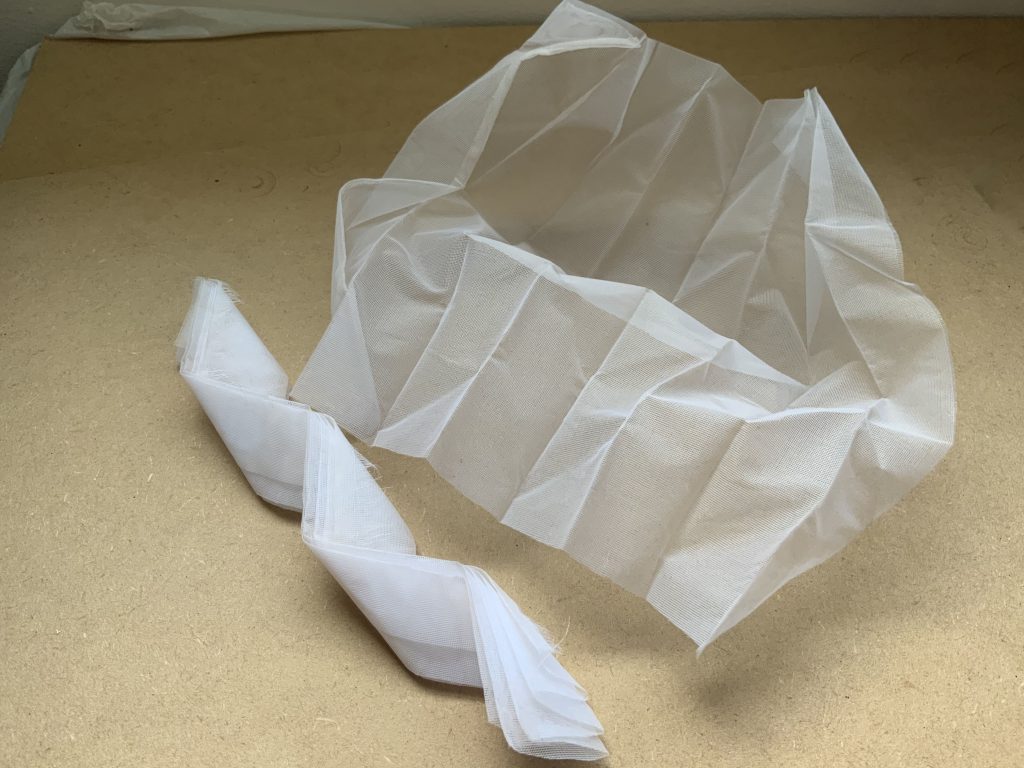 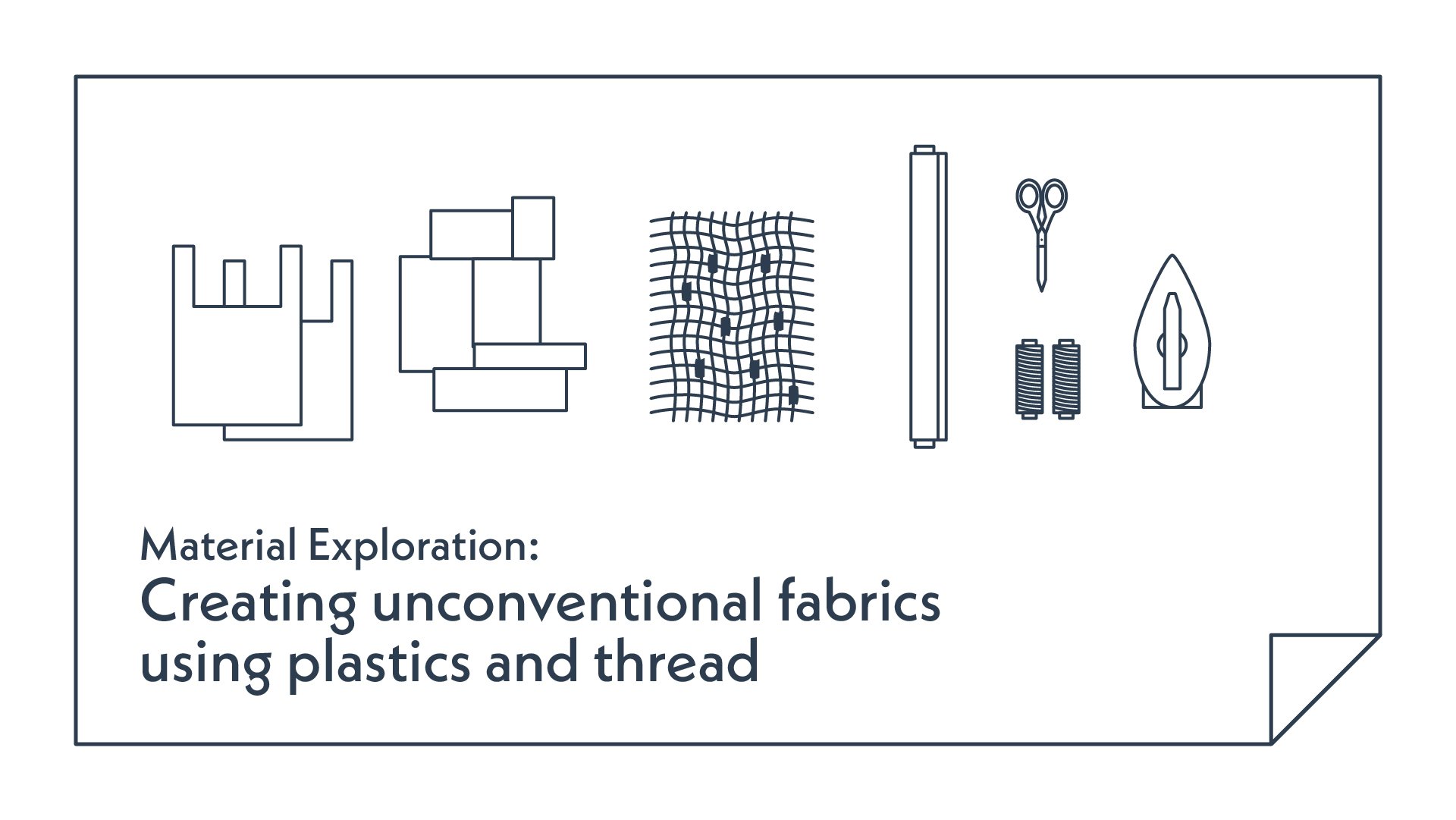 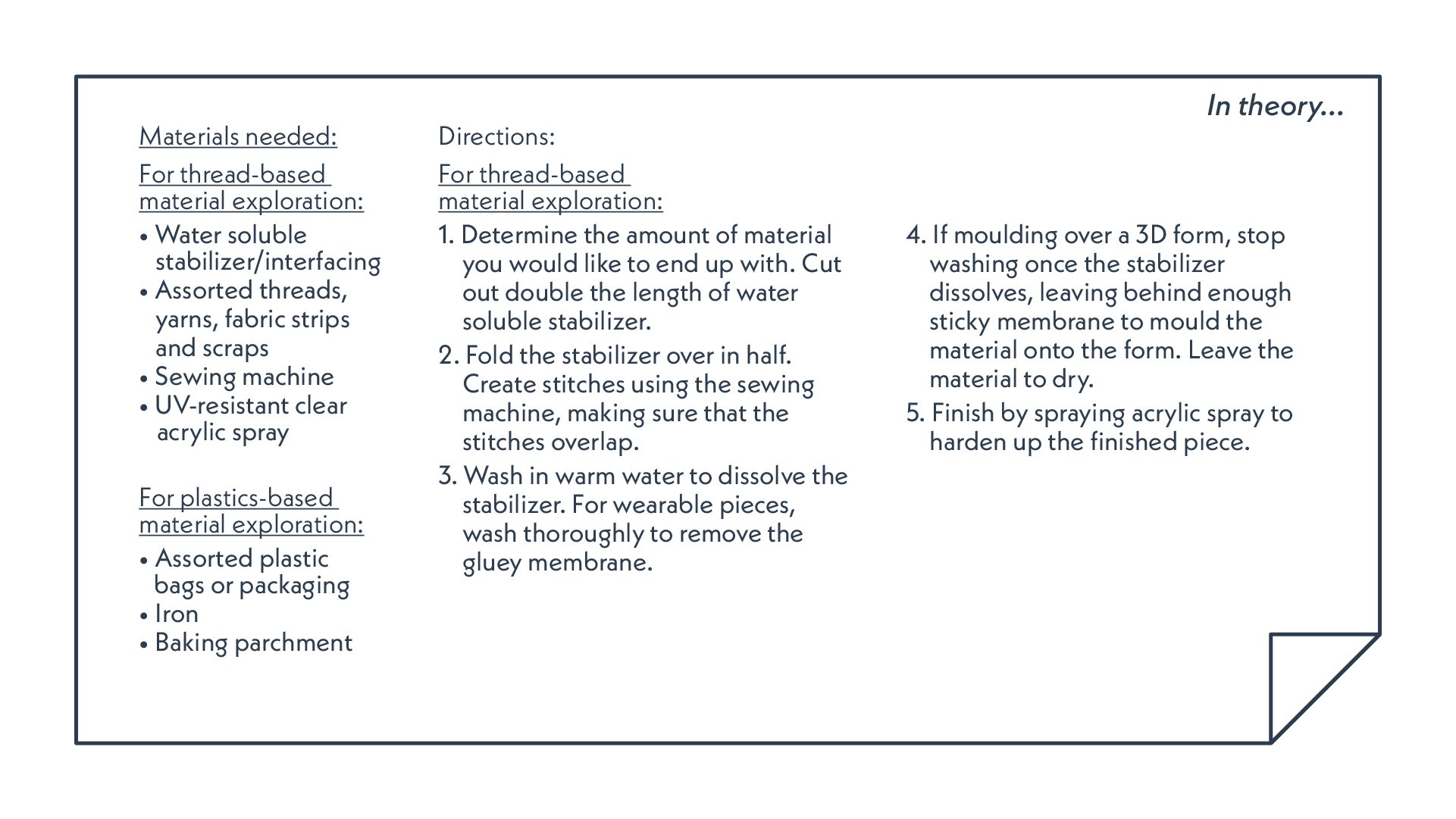 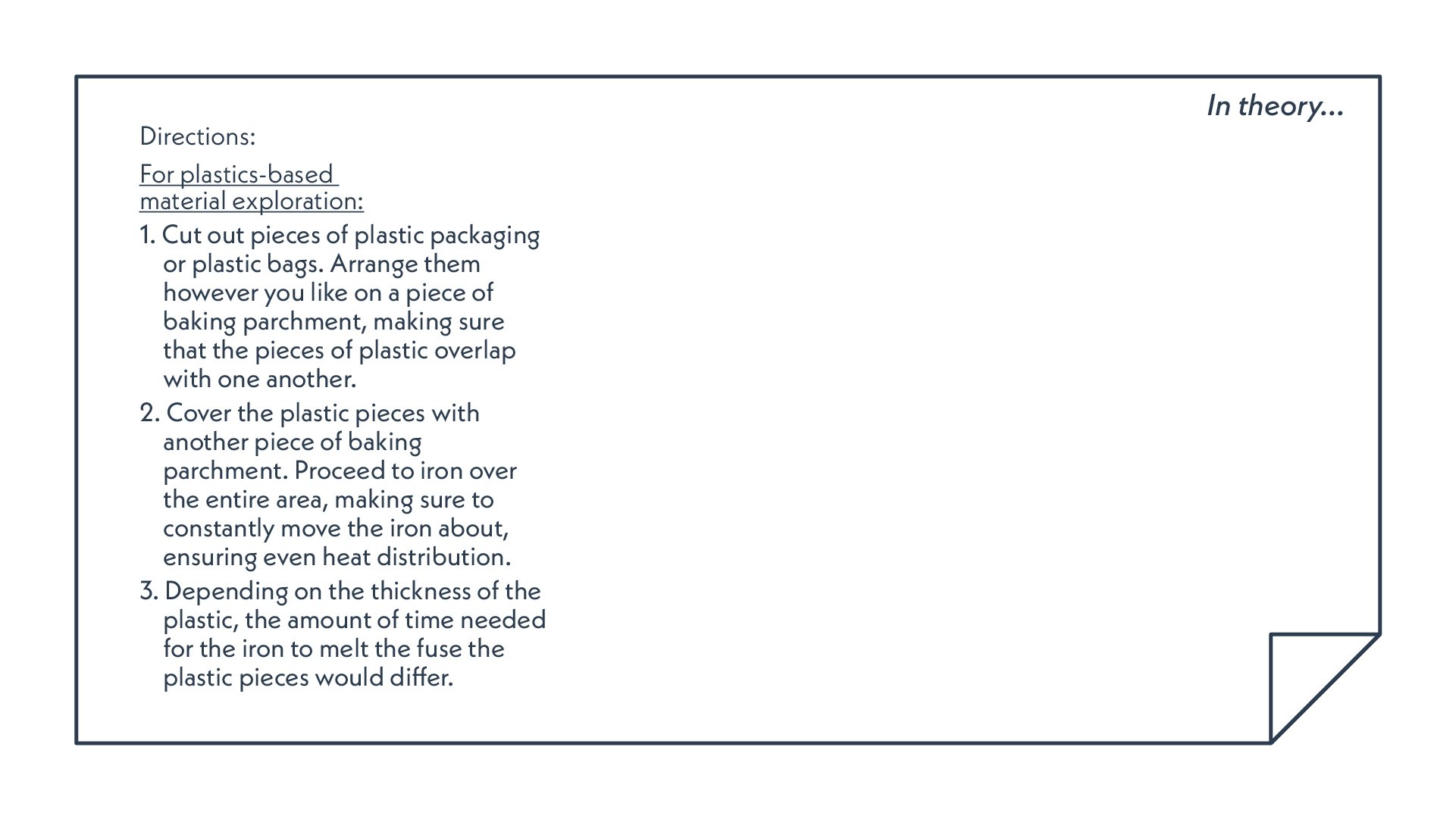 I lost track of what we did for each week :’D
Plastic-based material exploration is a pretty interesting technique. The resulting material that you get is waterproof, making it ideal for bags or coats (I vote bags or pouches because I don’t think wearing plastic bags is going to be that comfortable and also I am not the biggest fan of raincoats :/). This is also a technique that is pretty accessible and low-cost, considering that the only thing people might have to purchase is the baking parchment. I imagine this could a pretty cool arts and craft project for younger kids (of course with adult supervision!!!).
As for the thread-based material exploration, I THINK IT IS BRILLIANT!!! And the results look really good (not for mine. But Prof. Galina’s dresses for the National Museum? *chef kisses*) While this technique might not be as accessible as compared to the plastic-based material exploration, I think it is still a pretty interesting technique that produces some really interesting results. And it allowed me to have more opportunities to practice using the sewing machine so that’s a plus for me. 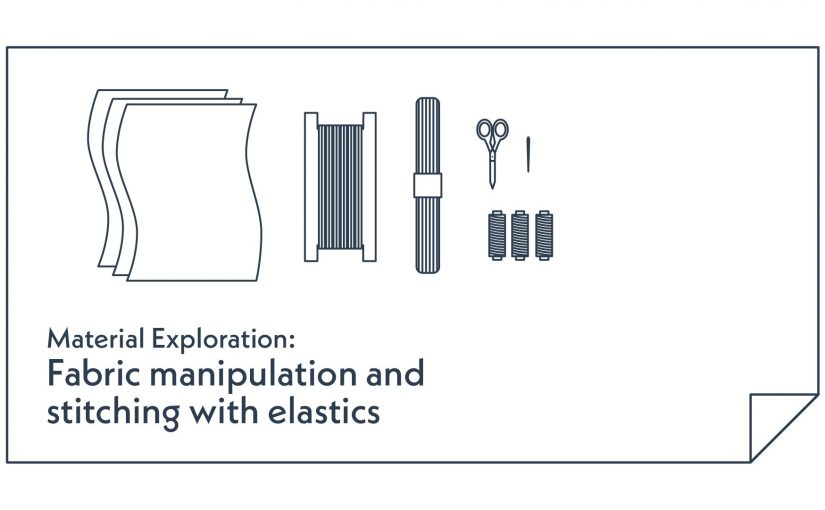 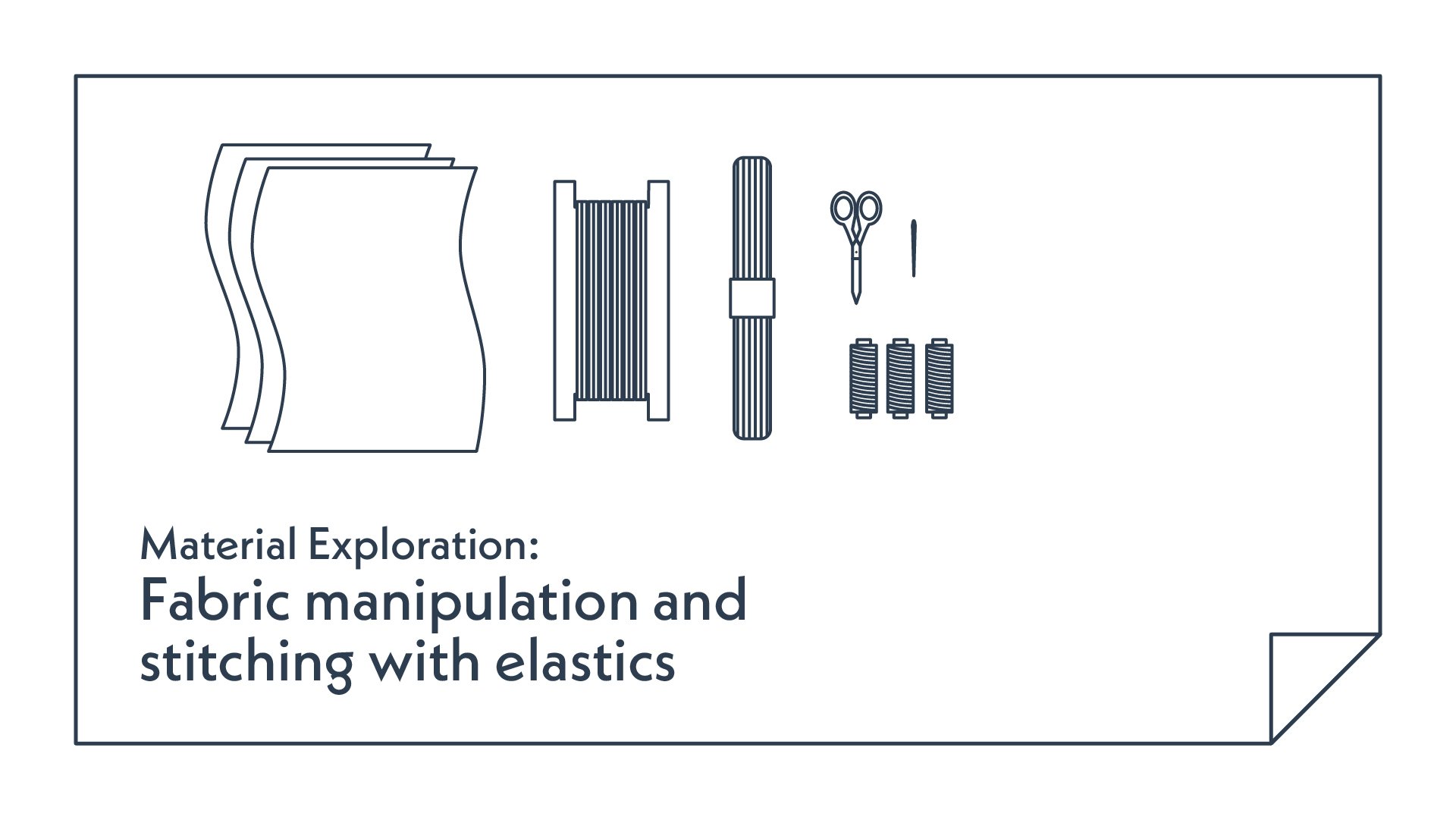 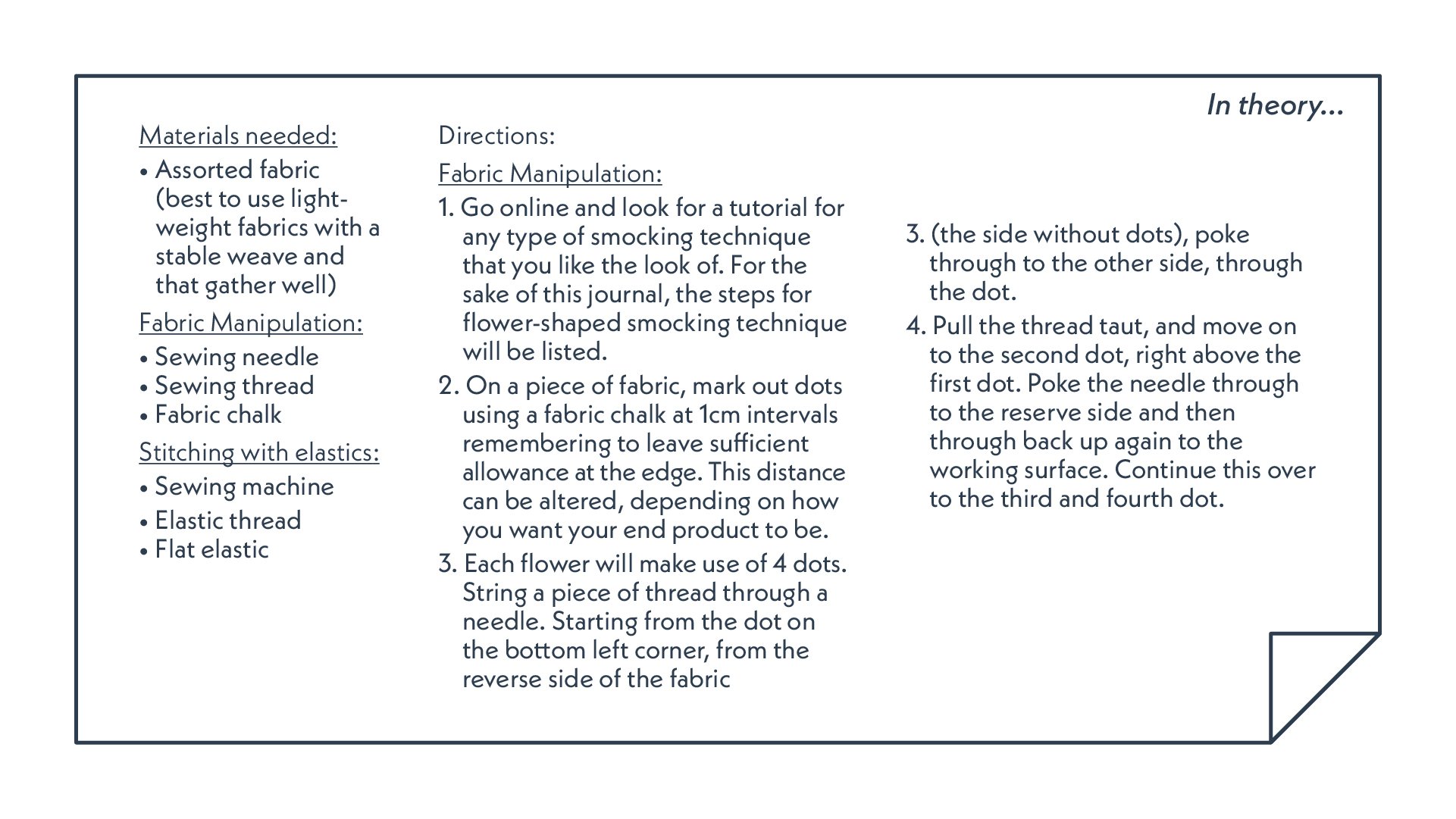 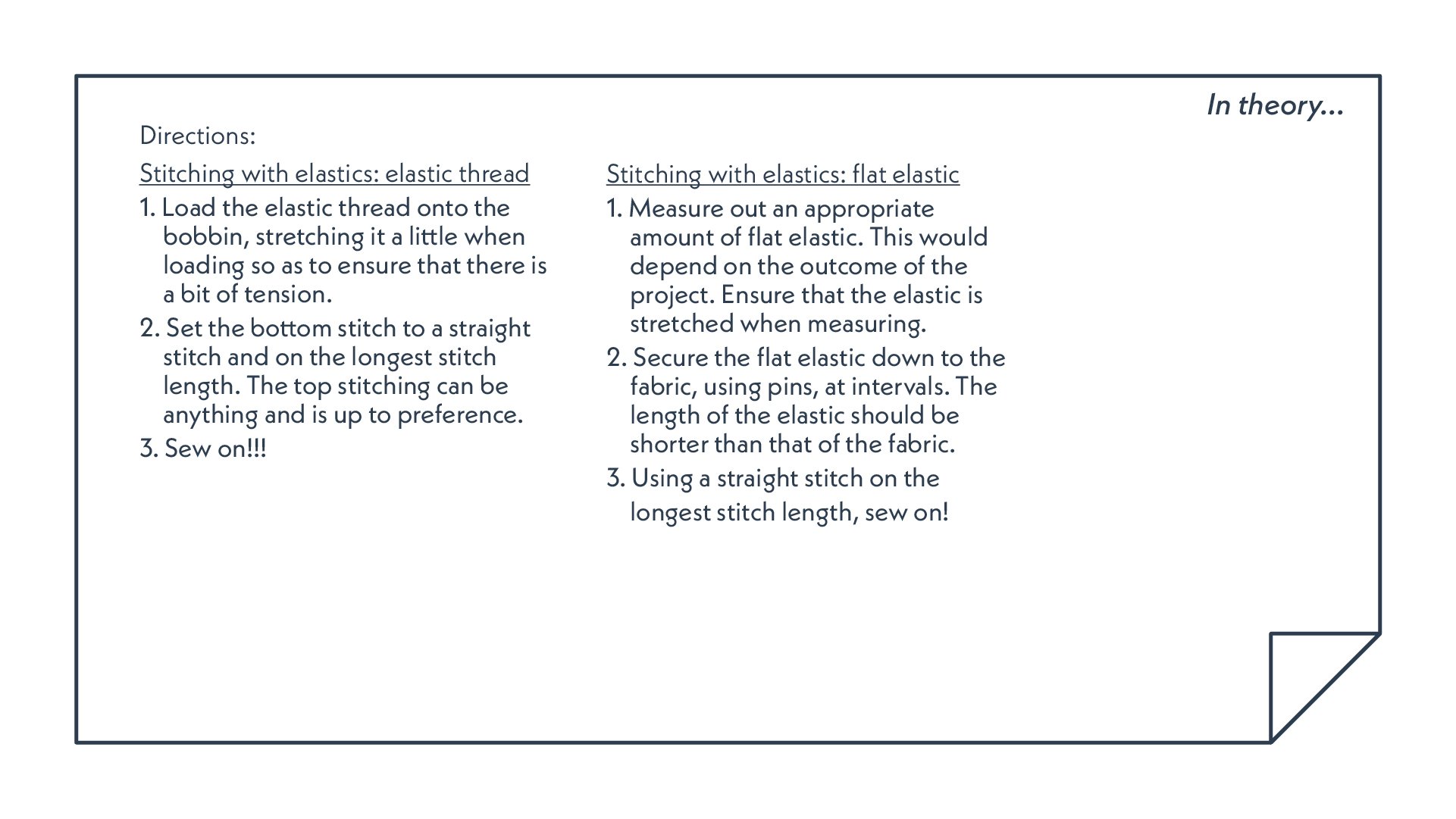 There are so many smocking techniques Q.Q but also there are also quite a few tutorials online so it all works out. One thing to note is that while traditionally, the stitches are done continuously, by breaking up the stitches and doing only one at each point, the stitches might be stronger (I don’t know if I heard this correctly) and it might be easier to repair or continue the smocking process, as when one stitch snaps, the person doing the smocking does not have to redo the entire process, but rather just go back and fix that one point.