Prof. Galina cut up her velvet scarf for us to do etching (ಥ﹏ಥ) For some reason, all of us weren’t able to get our hands on the correct type of material (I tried getting velvet from Arab Street. I checked with the shopkeeper, confirming with her whether or not the fabric I was purchasing was a mixture of rayon and silk and she confirmed that it was. Then when I brought it to class, Prof. Galina said it wasn’t. *screams*) Moving on…
Devore, also known as burnout, is a technique whereby chemicals are used to remove cellulose fibres to create a translucent pattern against a solid fabric (or vice versa, where you have a solid pattern against a translucent background). Most commonly applied on velvet, this technique works best on materials with blended fabrics, which combines cellulose-based fibres with protein-based fibres.
The solution we used in class to do this burnout technique is Fiber Etch. The solution only removes plant-based fibres such as cotton or linen, leaving the protein or synthetic fibres behind. The design can be created through painting Fiber Etch directly onto the fabric using a paint brush, or through printing it on using silkscreening. Once the Fiber Etch solution has been applied, leave it to dry before ironing the fabric. The areas painted with the solution should turn brown and be easier scratched off, leaving behind a thin, translucent layer. Once done removing the areas that the solution have been applied to, rinse the fabric thoroughly to remove all traces of the Fiber Etch solution.
Obviously silkscreening would have been the easier option but for some reason, I decided I wanted to paint on my own design (why Louisa why -.-). I decided to doodle some random shapes onto the reverse of the fabric and paint around them, allowing the shapes to stand out against a translucent background. Quite a lot of Fiber Etch solution had to be painted on in order for the fabric to be soaked enough for the solution to work its magic. The painting did take quite a bit of time so I only managed to ironing portion the following week. When that part of the process finally happened, it took a pretty long while for all the bits to be scrapped off from the fabric. Also, for some reason, the areas that I did not paint with Fiber Etch dried up and fell off as well :’) I guess if I ever get the chance to experiment with Fiber Etch and Devore again, I might stick to simpler and bigger shapes. But overall, it did produce a pretty unique effect and it’ll probably look really nice used for a wide variety of things.
Moving on to bleaching! It was pretty straightforward. Prof. Galina had this plastic (?) doily that she offered for us to use to experiment in this exercise. Esther really kindly offered to share her black fabric with us and so using a piece of black fabric, we laid the plastic doily over it and just spritz some bleach over the entire fabric. This resulted in a negative of the doily pattern being “printed” onto the fabric below, with the areas coming into contact with the bleach turning a shade of reddish-orange. Other ways of creating unique patterns could include in random areas of the fabric being pinched and twisted, before applying the bleach. There are many examples online and bleaching is a pretty simple technique that could allow for some pretty interesting results.

For some reason I thought that latex would not stick to a silicon mould but it did (￣Д￣)
This week we got the opportunity to play around with resin and latex. Latex (as described on good ole Wiki) is an emulsion of polymer microparticles in water. Latex can be found in nature (usually in flowering plants) as this milky white fluid that is exuded after tissue injury e.g. a cut has been made into the stem of a plant. This natural latex is not be confused with plant sap. Latex can also be created synthetically and both natural and synthetic latex is used in a wide variety of objects such as gloves, balloons, glues and many more.

For this class, I’m not too sure what was the objective of us learning about latex (it was my own fault, I had ran off with Hsin Yee to North Spine to grab a smoothie as a replacement for a birthday cake for Prof. Galina, so I had no idea what we were going to be doing for this class) but I would presume it has something to do with us experiencing how to create moulds of objects using latex? Or to create a latex replica of an object? I think it is more of the former. In any case, we got to experience the panic of mixing liquid latex with hardener before pouring it into our moulds or into our casting containers. The ratio taught to us was that for every 100g of liquid latex, we should add approximately 3g of hardener. Before preparing the latex, we had to prep our moulds with mould release spray. (For some reason, my brain thought that, hey, since the mould that I am using is a silicon one, I probably will not need the release spray right? Well, you thought wrong Louisa. I’ll get to that in a bit) Once the hardener is added, mix to ensure that the liquid latex and hardener is mixed evenly, then quickly pour the mixture into the prepared mould or casting container. This step has to be done really quickly as the latex solidifies pretty quickly. Well, because I did not prep my silicon mould with the mould release spray, the latex is now forever bonded to my silicon mould. Sigh. On to the next portion of the class.

Resin. Resin is a solid or highly viscous substance of plant or synthetic origin, that is typically convertible into polymers. Resin can be used for a wide variety of things as well. The ones that I am more familiar with is like using resin and moulds to create pendants for jewellery-making. Or using resin to make custom keycaps. This is pretty in-trend now due to the sudden popularity of custom mechanical keyboards (or maybe it has been trending for a while but it was only recently I started observing my friends actually getting their own customized mechanical keyboard and then bringing them around, in addition to their laptops…)

In any case, the procedure is quite similar to that for dealing with latex, just with the addition of a mask and a pair of gloves (the smell of resin is really strong). Prep your mould with mould release spray before starting to mix the epoxy resin with the hardener. The same ratio applies, for every 100g of resin, drop in 3g of hardener. Once the hardener has been added, stir to ensure that everything is mixed evenly before pouring into the prepared mould. Leave the mould in a well-ventilated area for about 24 hours to allow it to dry and fully solidify.

For my final project, I was inspired by water surfaces.

Several references that I took from water surfaces was the appearance of the uneven surfaces (due to the ripples), the colour (shades of blue or playing around with transparency) and colourshift. Based on these factors, I tried the following techniques: knitting, thread-based material exploration, felting and elastics.

The thread-based material exploration did not work out the way I wanted it to be. I wanted for the shape to be irregular but when I washed the threads out, the shape did not stay the way that I wanted them to be.

This sample just did not turn out the way that I wanted it to be but okay.

This turned out to be more like a cloud rather than… anything water-like.

As for the application, I thought that maybe this final could be used as a table mat or as a seat cover.

Knitting is probably one of my favourite techniques (♥ω♥*)

I’ve tried knitting before. My friend requested for a scarf for her birthday present (because she was going away to Norway for exchange, during the winter months. Her exchange was cut short due to covid though :’)) and so I set about learning how to knit. It was pretty straightforward, though it took a while for me to actually start producing even stitches and to stop ending up with more (or less) stitches than what I had cast on in the beginning. But that was that. All I knew prior to this class was just 1 method of knitting. Or just one type of stitch. What I was not aware of was just how many types of stitches there were and how they could be used in combination to produce different patterns. In this class, Prof. Galina taught us how to purl. I had a hard time trying to catch the technique during class but somehow after class, when I went back to the VC workshop and tried figuring how exactly to do a purl, I managed to catch it within 30mins. What do you know.

In any case, to start knitting, grab a pair of knitting needles and the appropriate yarn (or more like the yarn of choice and then the appropriate needle). Most yarns would state on the back of the label what size needle is suitable. While it is best to follow the instructions, you can try experimenting with the size of the needle as this can produce some pretty interesting results (the size of the stitches will be bigger or smaller and depending on what you’re knitting and the effect you’re going for, this could be a good or bad thing). I have no idea how to actually describe the process of knitting but thankfully, there are tutorials available. 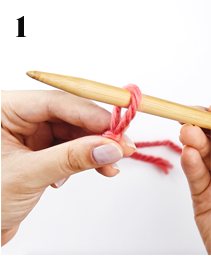 The image above is taken from Sheep&Stitch’s post on “How to Knit for Beginners”. The instructions are pretty clear and 10/10 would recommend checking out their content when learning the basics of knitting. They have another post on how to do the purl stitch as well. Included in the post is a breakdown on the difference between the knit stitch and the purl stitch which I thought was pretty cool.

As for the applications of knitting, well, the sky is the limit I guess. Other than the usual sweaters, scarfs, socks and baby blankets, you could also knit wires to create jewellery.