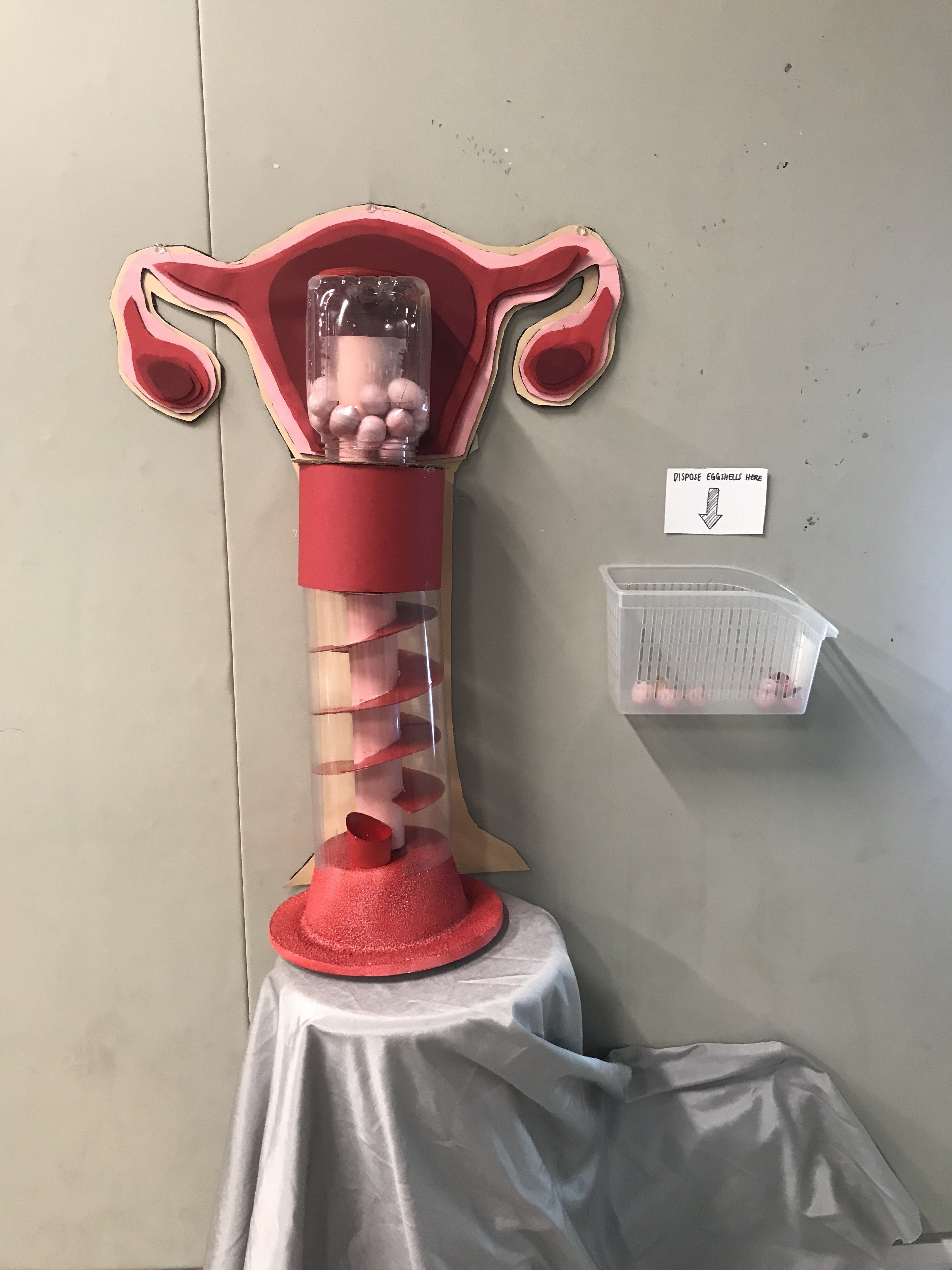 We chose to expound on Provocative object.

Project concept: Our project is based of trying to break the notion that ‘mensuration’ should not be talk about freely. Especially in an Asian context, we see girls who tend to hide their pads as they head to the toilet or even to not bring up the pad talk when there are guys around. Hence, we are here to break that taboo and also to get people to strike conversation about anything mensuration related.

In order to get people talking, after consultation, we decided that our entire project should should head towards the direction of making it palatable for other to talk about it.

The initial idea was to have a gum ball machine where it will dispense an egg, with an SD card in it, after a tweet with our hashtag been posted. The contention was to get people talking online and to social engineer conversations in the third space. In return for contributing, they would get to hear tips/tricks/hacks derive from someone else’s experience.

The gum-ball machine was representative of the uterus and the egg-the unfertilised egg. 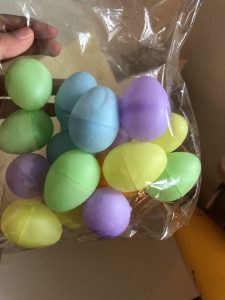 However based of out first user test, which can be found here: https://oss.adm.ntu.edu.sg/fenellaz001/project-development-body-storming/, we realised a few things that needed to be changed.

Mainly that the slope was not steep enough and made worst with the weird shape an egg was in, hence we had to change that. 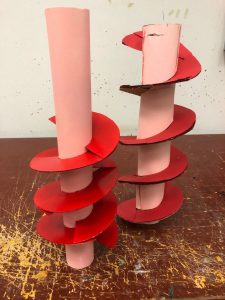 After the test, 2 other reiteration of the slop was being made. The right was made without the consideration of where to hide the electronics where as the left one was the latest rendition.

Next, based of Alicia’s comments of the gum-ball being too prominent and the message was unclear, we decided to have the gum-ball machine as a the shape of the uterus. Fenella suggested using paper cut outs with this as the inspiration. 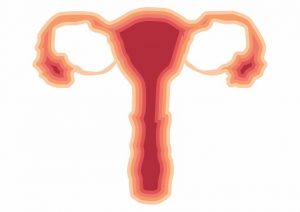 Next was shopping for the container of the gum-ball. 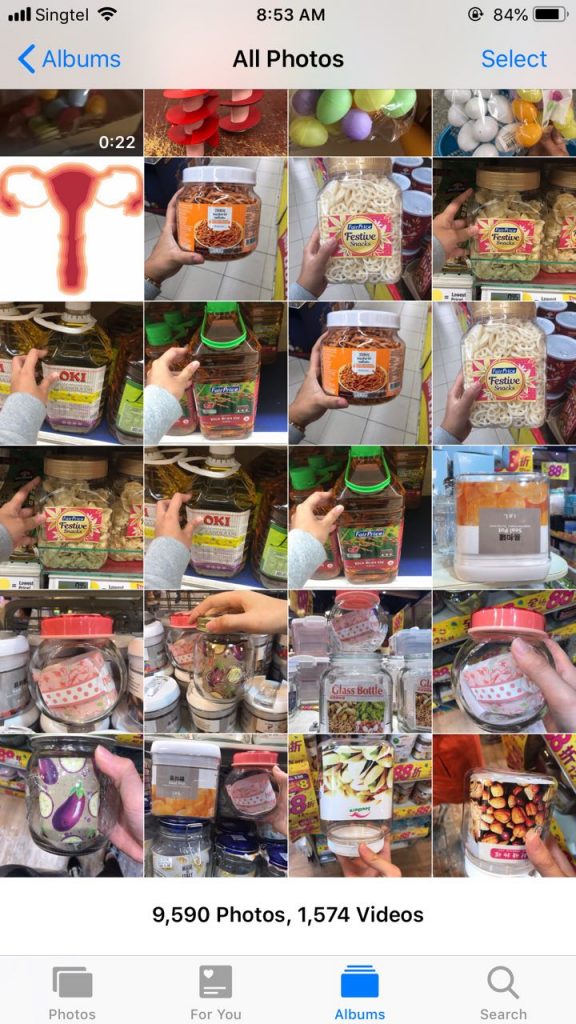 We went sourcing for the perfect sized container.

These were mainly the parts we had to fix with regards to the form, working towards final project.

We needed a tweet with a particular word to activate a servo.
As for the coding, we went through 4 main stages.

Mainly at this point, we got to using twitter API which we realised mainly that this was a reoccurring element that need to be used through out the various methods we hopped around.

Basically, what what wanted out of this system to work was the same as the previous. However, the problem with this was that what processing did was to collect the latest 10 tweets to bounce around instead of filtering real time. This caused our servo to just be executed once even though now it solved the previous problem of not being able to move back and forth.

3. Python+Arduino
In the midst of still trying to solve the tweets real time, we stumbled across Python and we did it! 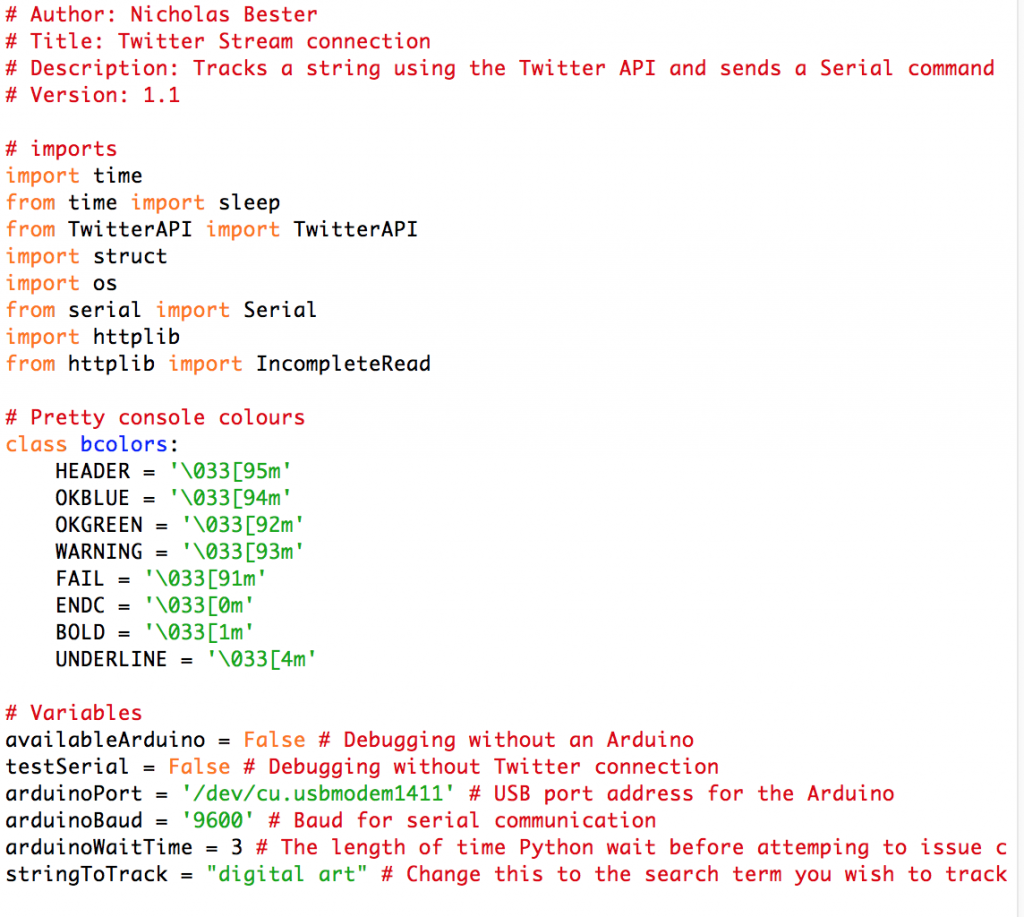 With the library: twitterAPI , we manage to get the tweets being filtered out real time! This can be seen in our previous post here: https://oss.adm.ntu.edu.sg/ho0011an/project-development-body-storming-part-2/
We attempted to link this to Arduino however, it was a struggle. I tried using the module Pyserial.

After consultation at this point, we concluded that it could possibly because Arduino uses C# which might be why the connection is wonky/doesnt work.
Hence, we decided to use either circuit playground or raspberry pi.

We settled on Raspberry Pi eventually because of the same language that is being used. 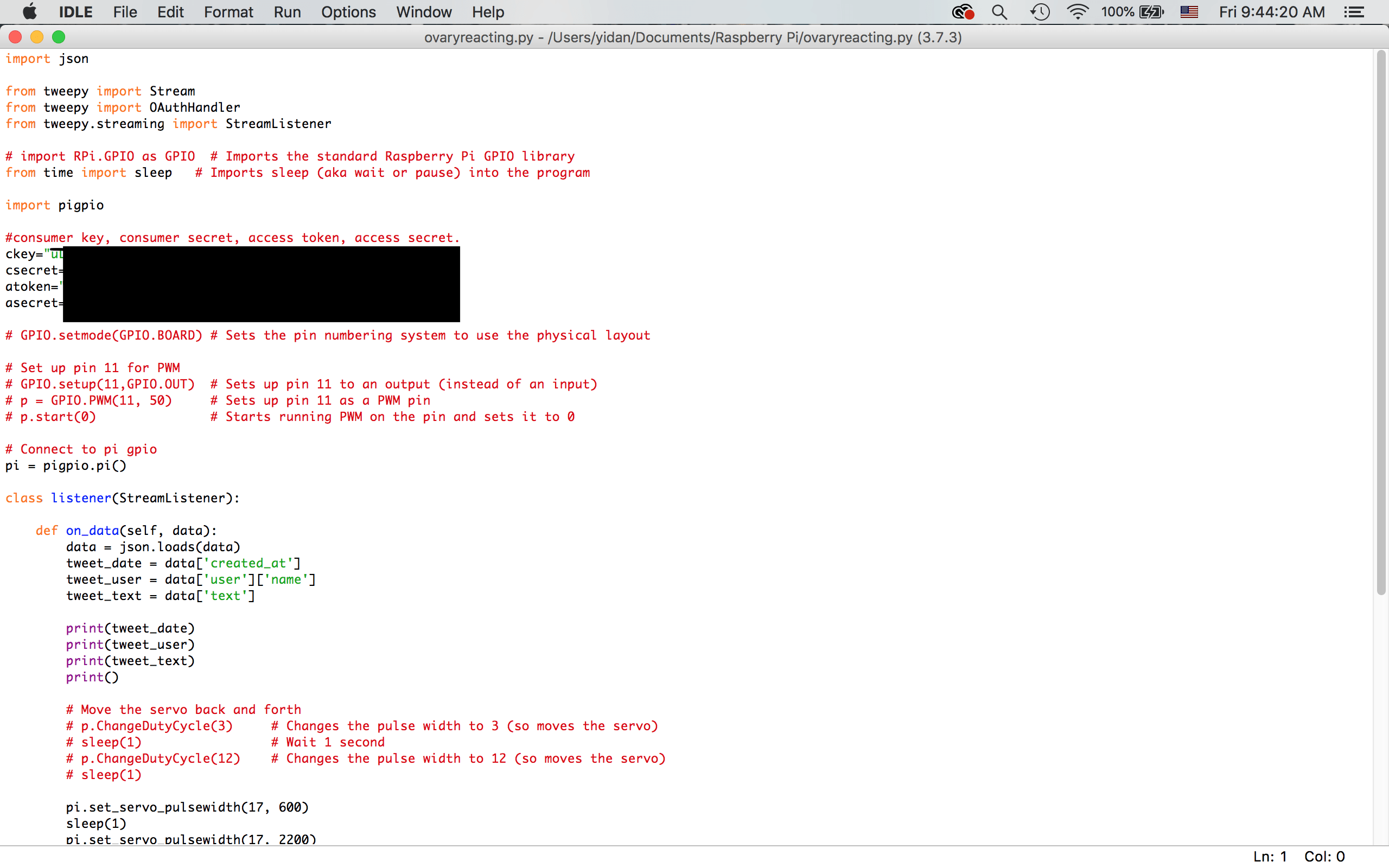 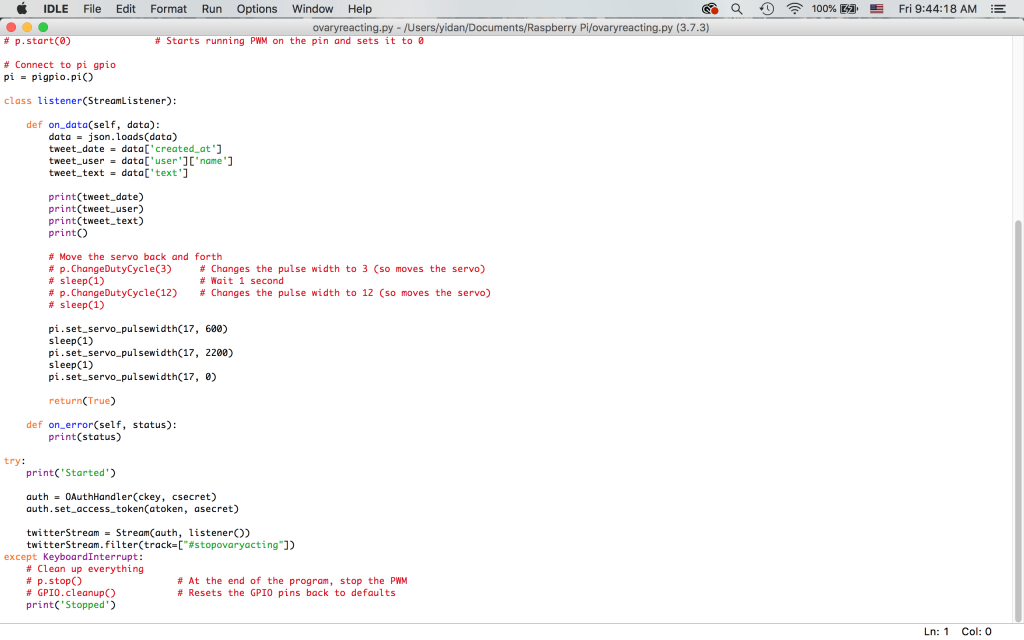 At this point even though twitter APIs are being used, we decided to change it the library to Tweepy instead of TwitterAPI. We also used Pigpio to control the PWM being released to Pin 11 because initially without this the servo kept jittering.

And with the Raspberry Pi it worked!

After the code was done, it was to decide what shall be in the egg.

The initial plan was to have an SD card and get people to hear another story. However, after much feedback we decided to scrap that because the ‘reward’ factor was not appealing enough to engage the audience. We thought of using a QR code, we also had the idea of even stuffing a pad into the egg so that we give other the opportunity to touch a pad in public if they hv no done so to normalise that scene but after discussion we decided to settle on a gift. We decided to sew cute anthropomorphic pads out of white felt and stuffings. 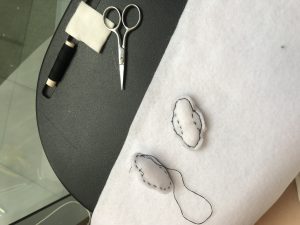 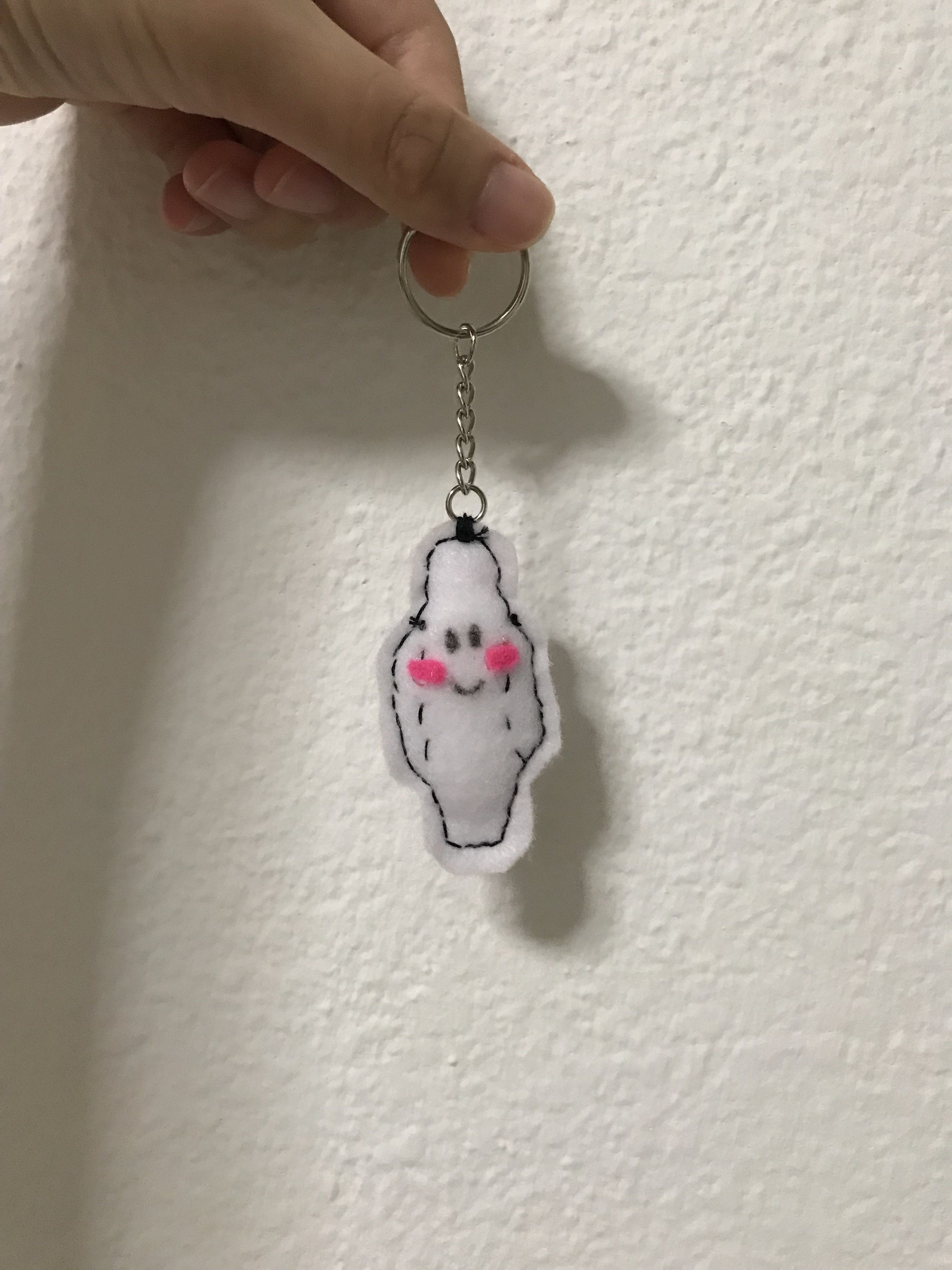 This was coupled with a note.

(Back) Either of this tips 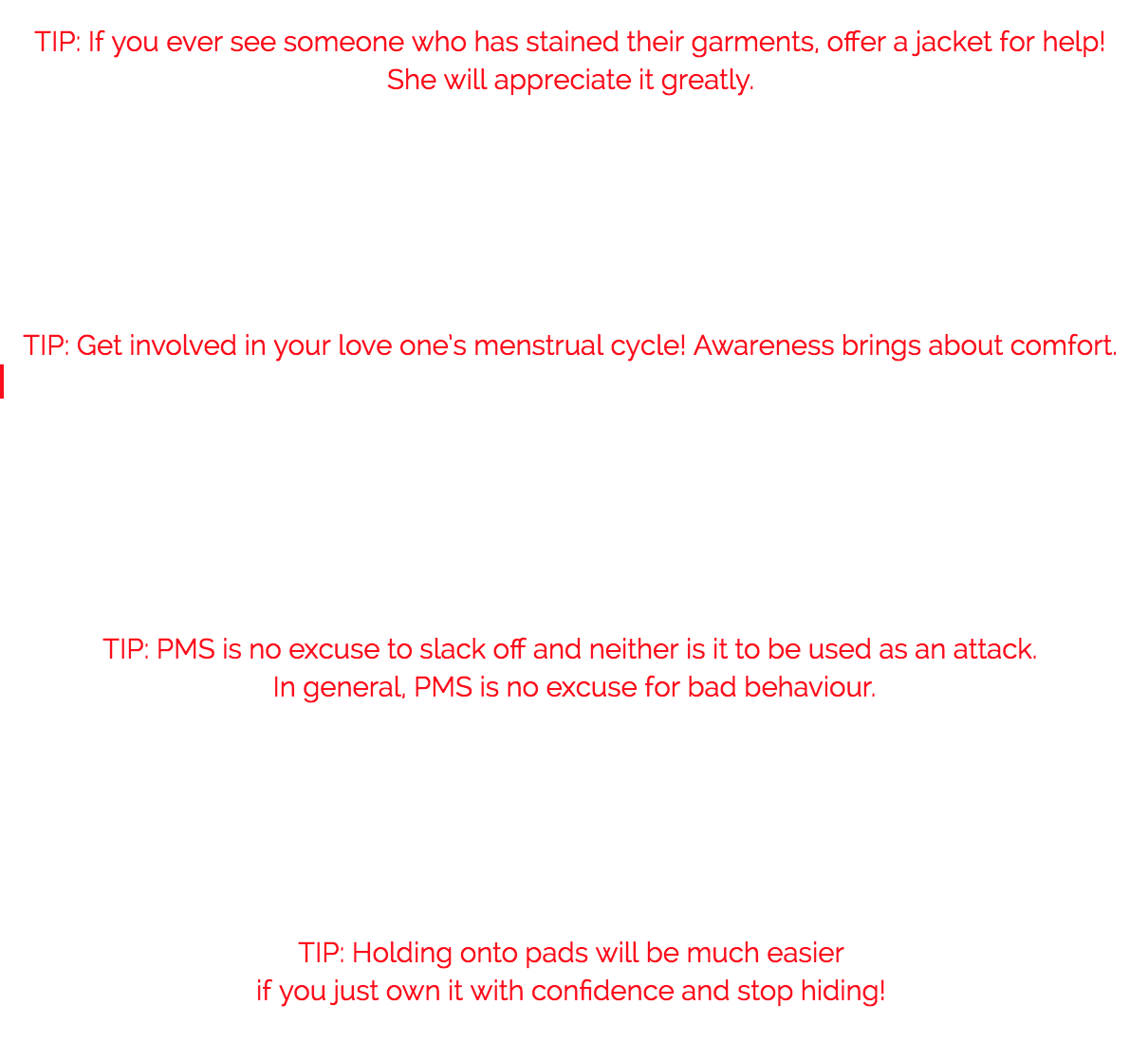 We went along with this because we wanted to the keychain to be a conversation starter for others even in the physical whelm. To have this project go on even after presentation crit.

On the actual presentation, we decided to go for a more cooperate style set-up. 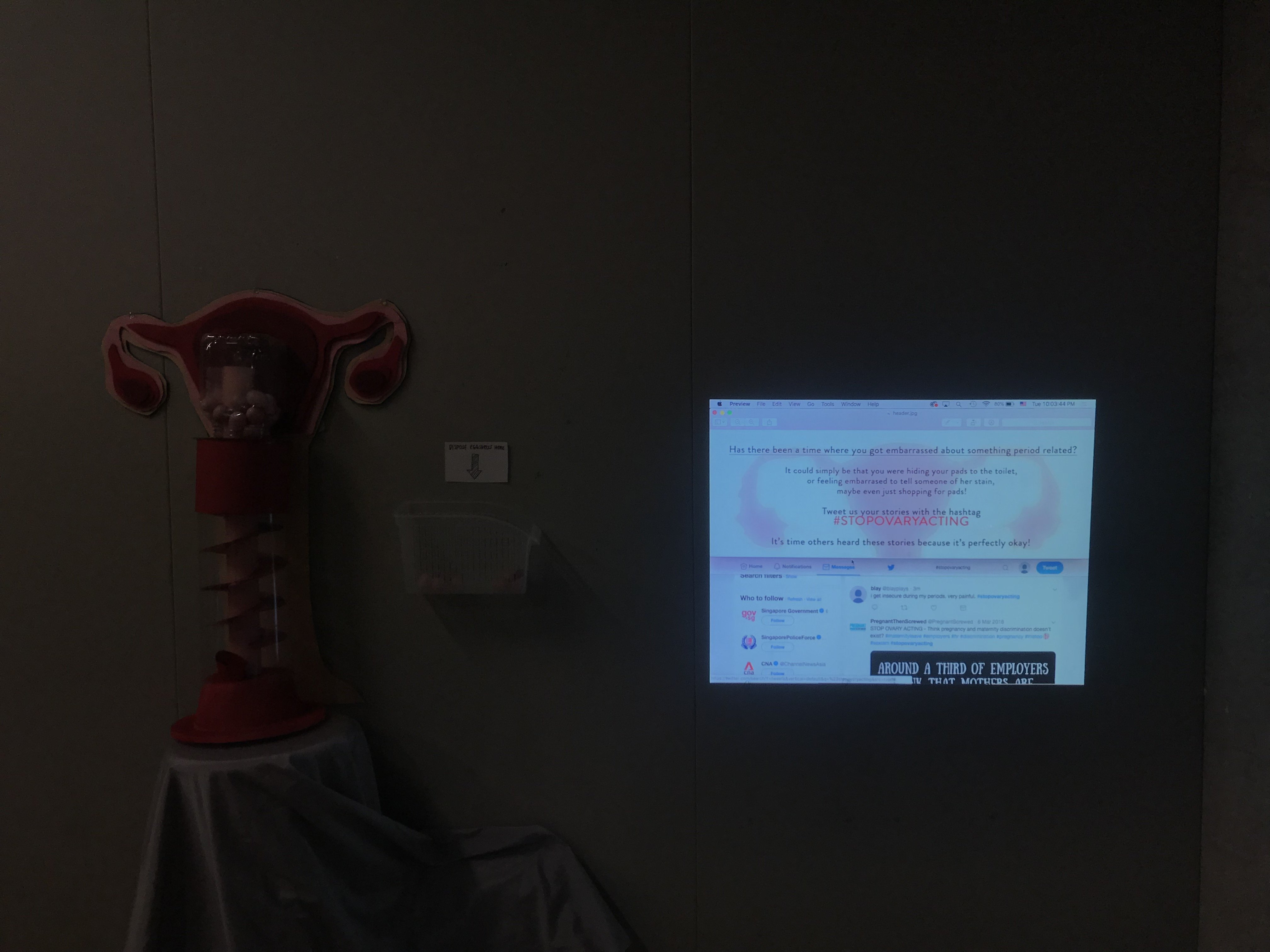 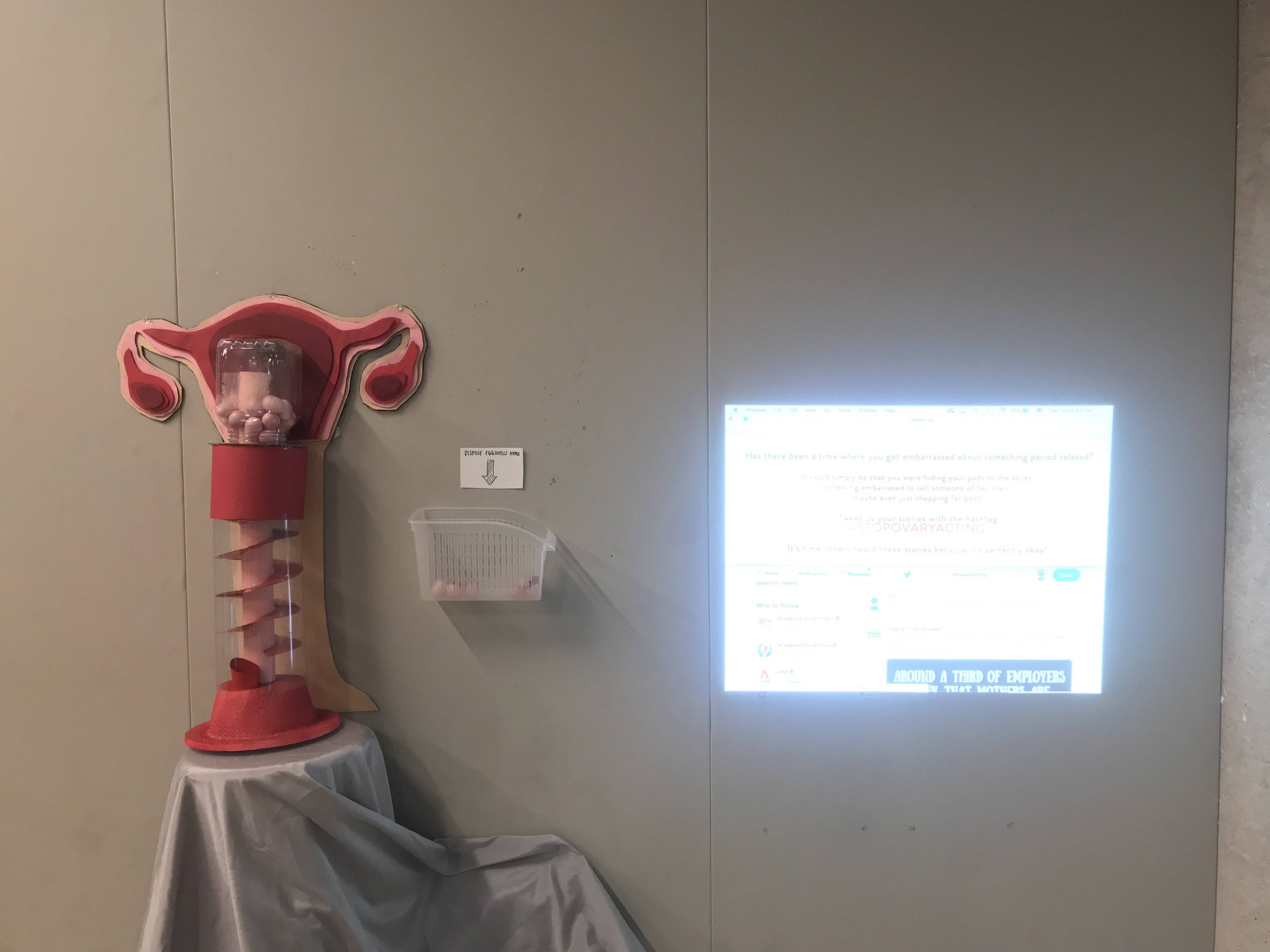 We decided to live stream the hashtags that was coming in as well as instructions.

and finally our end product!
This disposing box was also a suggestion we incorporated from our first body storming.

Personally, this project has taught me a lot.
Coding alone, I am proud to say that I have gotten the basics of it down through the long tedious process. It was truly that a lesson of you don’t learn until you personally try it out. Even though there are is still so much I don’t know, and also still a little slow, at least it acts as a stepping stone towards something bigger.

As for the contention of the project, I also felt connected to it. Coming into this mod, I knew I had interest for the Social Media Sphere. I am thankful that in this project I was able to drive it into that space as well. Indeed, even for the second portion of what should be in the egg, I am also constantly in the process of questioning ‘What is the point of XXX from happening?’, soon I came to learn the psychological ‘rewards’ system of a human behaviour. That was incorporated into the project with trying to come up with a ‘high reward system’. The keychain might be small however, it has lasting effect hence, I am glad we went ahead with it even though it was relatively time consuming and I had doubts about it initially.

This project was packed with a good interwinning of technical and emotions which I really appreciated because in the border picture, I could really see technology being bridged with the arts.

I am really glad that the audience loved it as well! I believe the palatable aspect of the concept have also been embedded nicely with the use of a fun gum-ball machine and keychain.

Thank you for this project!