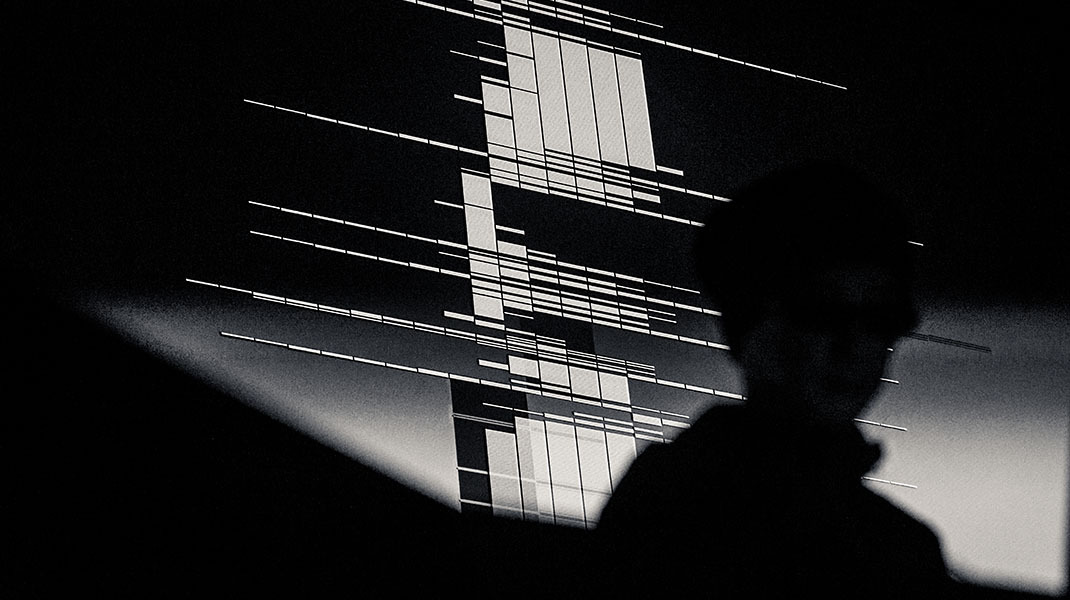 On first glance, his installations resemble TV static / computer encryption, accompanied by a deafening remix of heart beats going flat on a hospital monitor. These first glance impressions are consistent throughout his works and is fast becoming signature to him.

“datamatics” flashes sequences of pure data as an expression of the influx and pervasiveness of data in our world. 2

In “superposition”, two performers sit across each other, against a large split screen, accompanied by multiple smaller screens in the foreground. Different patterns of data play in these screens. 4

What drew me to his work and himself as an artist is his approach and philosophy to creating art. He disregards having a concrete concept to begin with and is more concerned with allowing experimentation and instinct in the process build up to the final outcome.

He used to DJ in clubs around Tokyo and he said, “I can’t play clubs anymore. I’m a middle-aged man and I do installations but it feels the same as when I was a 25-year-old D.J. Technically, my artistic method has become really sophisticated, but I think at the core, it’s the same as it always was.” 1

He first became interested in music when he played guitar for a rock band, but he also claimed he was not good at it. He studied something related to Economics in the University of Tokyo and was really bad at it. After graduating, he spent most nights DJ-ing in clubs around Tokyo. He is also incredibly shy, believes in no interviews, no portraits, and that his work speaks for itself better than he can explain it. 1