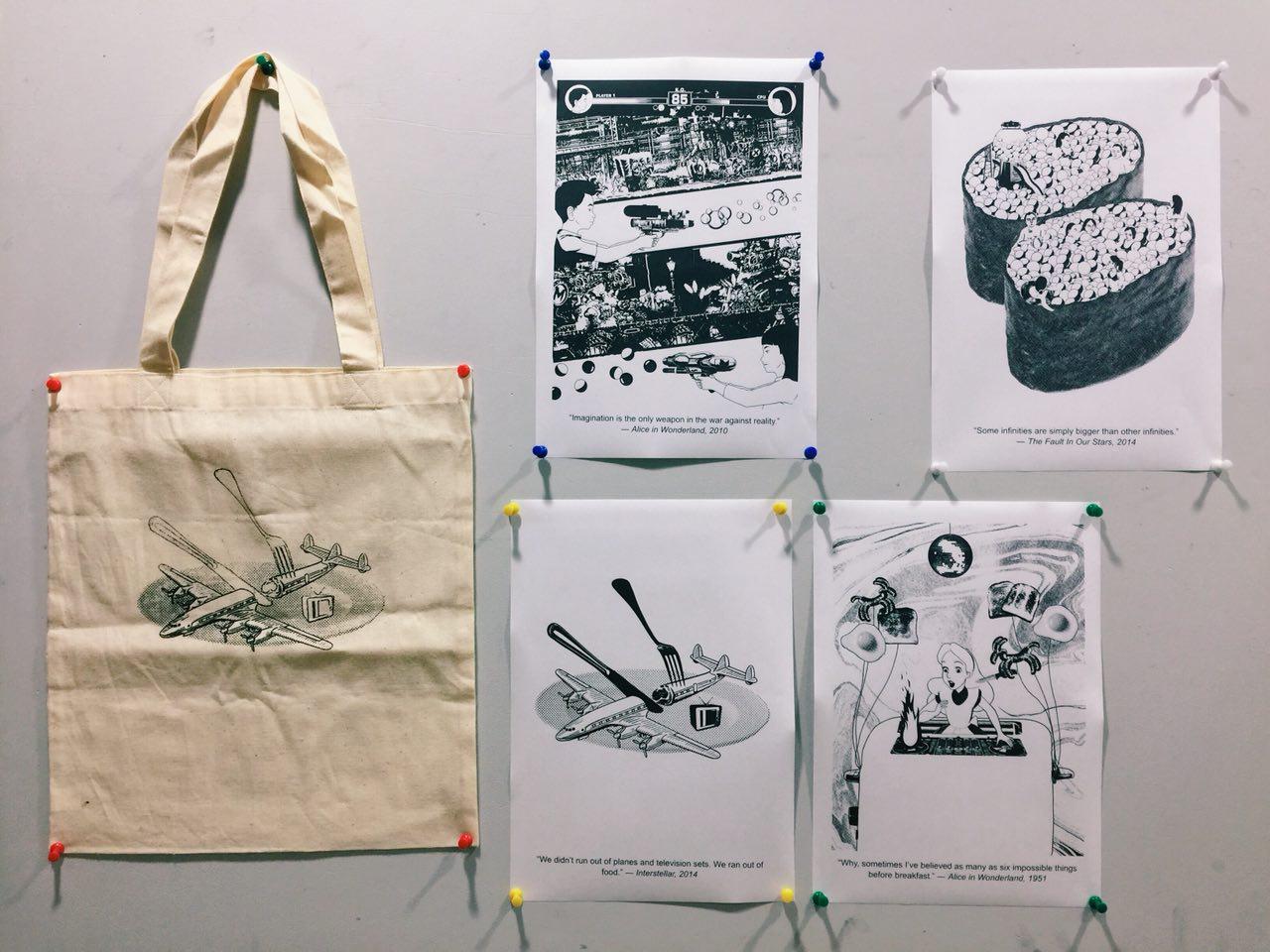 To create four digital monochrome prints based on movie quotes, using a Dadaist and / or Surrealist approach and only images found on the Internet. 1 of 4 designs will be selected to silkscreen on a totebag. 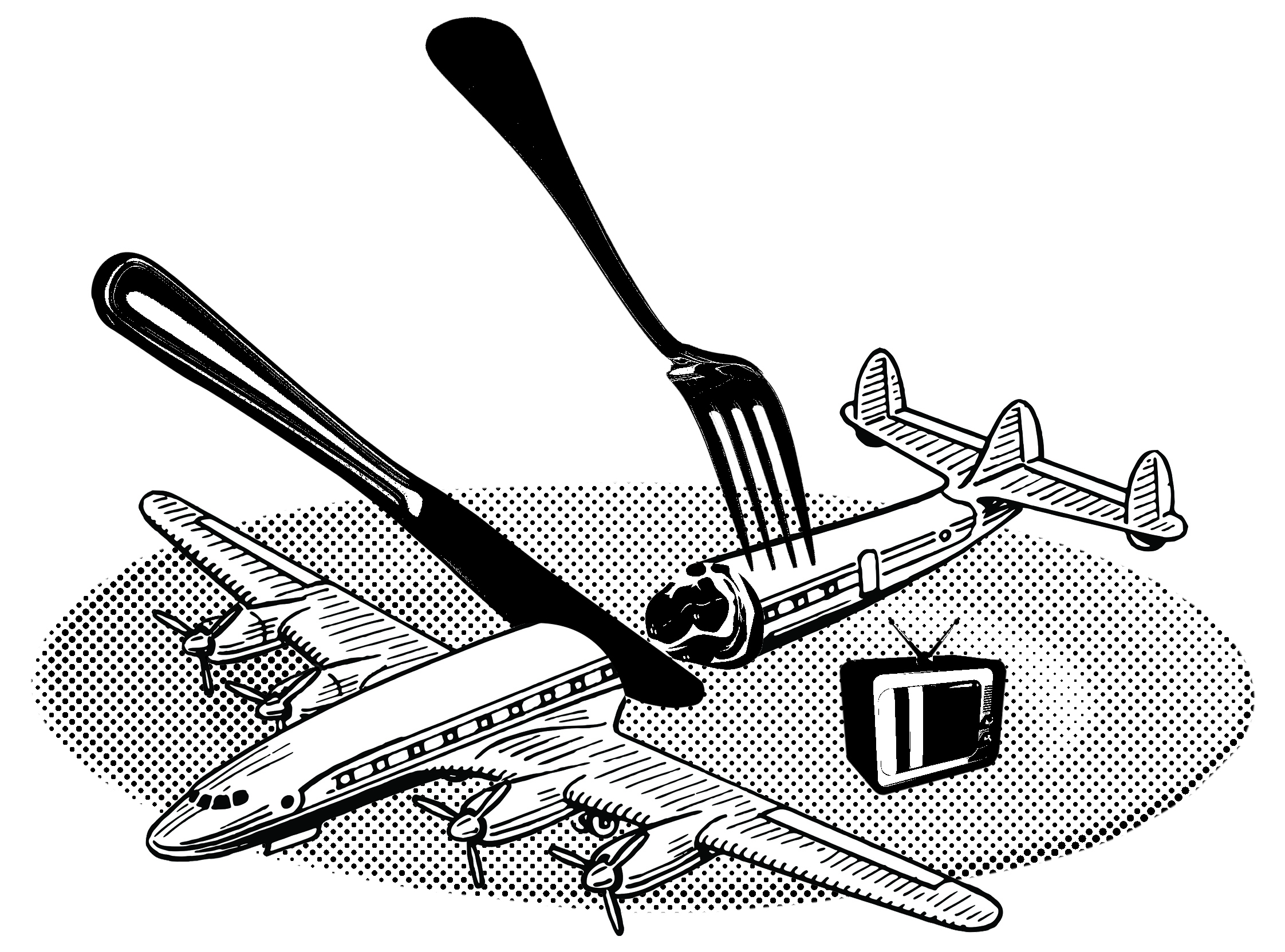 ‘We didn’t run out of planes and television sets. We ran out of food.’ ― Interstellar, 2014

In the film Interstellar, set in the future where the earth is about to be destroyed and mankind seeks a new home in outer space, the astronauts ran out of food so they started eating planes and TV sets. I thought it’d add a touch of humour to reinterpret the quote this way. 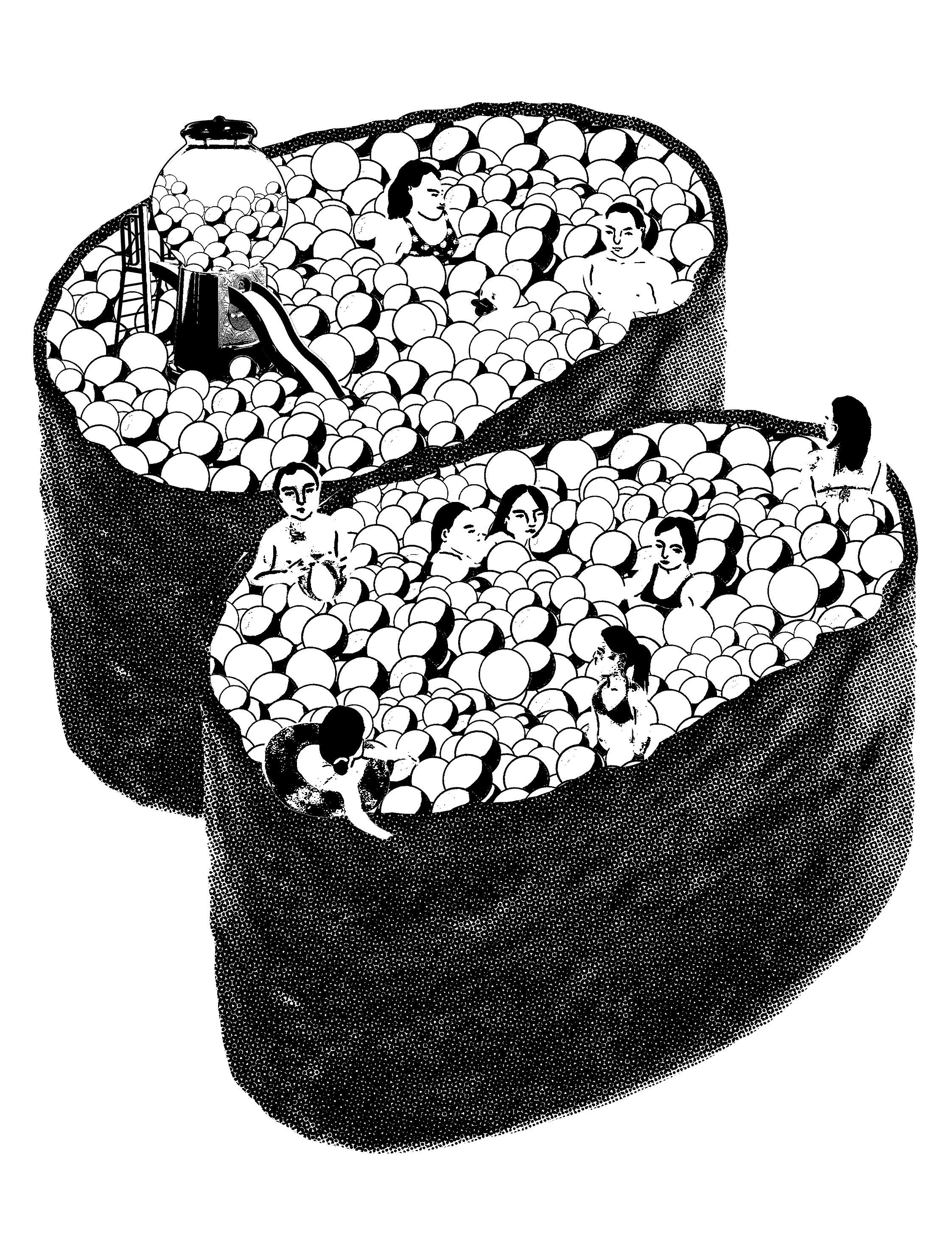 “Some infinities are simply bigger than other infinities.’ — The Fault In Our Stars, 2014

Inspired by Yayoi Kusuma who paints infinite polka dots over her version of the world, I thought about existing infinities I could find in our objective, real world.

Using the gestalt principle of multi-stability, the spheres contained in the ikura sushi can be perceived as different types of infinities. From one perspective, the spheres are gum balls. From other perspectives, it could be a sensory ball pit or a bubble bath.

A paradox is implied by juxtaposing and containing supposedly bigger elements (gumballs / ball pit / bubble bath) in a supposedly small Ikura sushi. So in relation to the quote, indeed some infinities are bigger than other infinities.

Further inspired by Where’s Wally illustrations of infinite stripy shirt people, I thought it’d be interesting to hide a rubber ducky amidst the spheres and position the people in a way that subtly camouflages with the spheres. 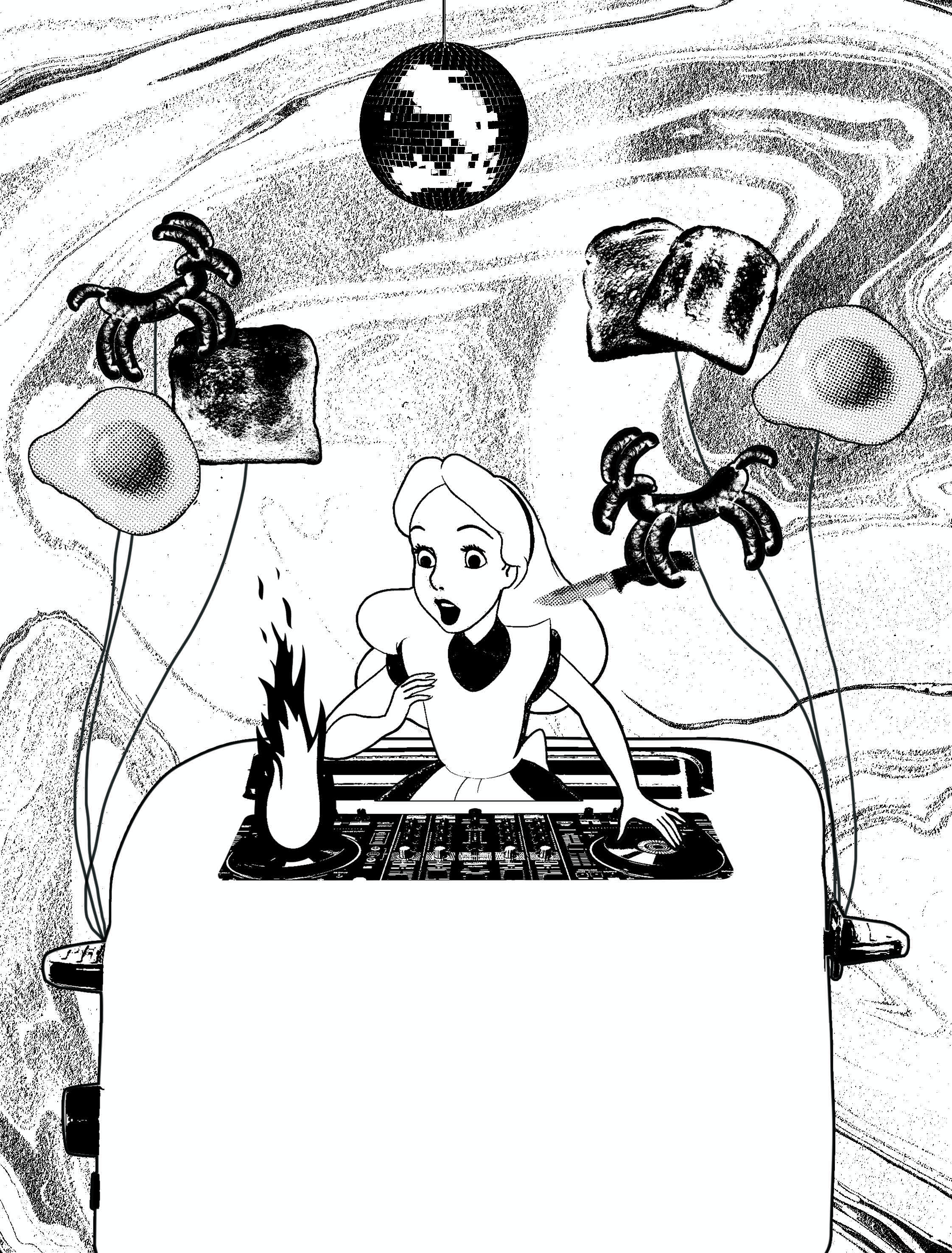 “Why, sometimes I’ve believed as many as six impossible things before breakfast.’ ― Alice in Wonderland, 1951

There are no six explicit impossible things depicted in the digital print, but is deliberately left ambiguous for the audience to interpret / imagine for themselves.

What we know so far is this: Alice is DJ-ing on a toaster with breakfast balloons hanging on the sides. One of the DJ discs has caught fire. One of the sausage balloon dogs is trying to kill her. 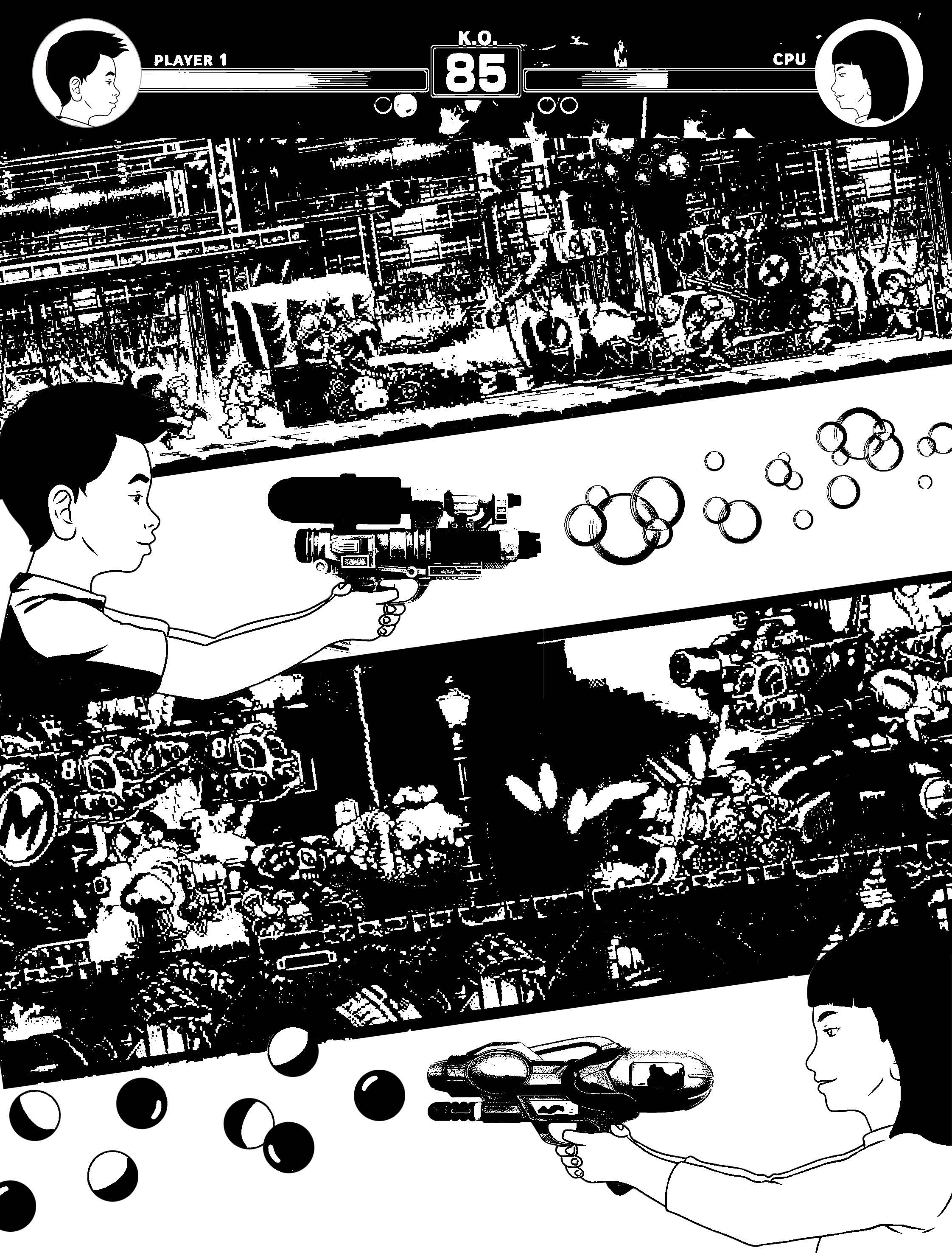 “Imagination is the only weapon in the war against reality.’ ― Alice in Wonderland, 2010

There is an unstable relationship between imagination and reality in this composition.

The boy is fighting a girl with a bubble gun. She looks like a girl but if you look closely at the life bar on top, the boy is playing against the computer. It is also not clear what is shooting out of her toy gun. It could be a different type of bubbles, sensory balls or any other sphere-like object.

Scenes of war make up the background, suggesting they could be fighting each other in those scenes.

In relation to the quote, the imaginative toy guns juxtaposed with the realistic war scenes express how imagination is the weapon they use in the war against reality.

Yet, the video game life bar makes it unclear if the world they are fighting in is imaginary or in real life. Then again, people often say that life is a game anyway.

Creating our own silkscreen design from scratch was a new experience for me and even though it was very stressful and tedious, there is a sense of reward and satisfaction when it finally turns out well. A lot of manual skills were involved from coating the screen with emulsion to printing the actual screen on our totebags.

My biggest challenges would be getting my design to expose well on the screen and sourcing for the images online (I think I find until my eyes almost bleed sia help la). I had a lot of adventurous ideas for my digital compositions but it was hard to find images so compromises had to be made here and there before arriving at the finalised designs.

While working on my digital compositions, I picked up new skills in Photoshop such as half-tone, threshold, and pen tool.