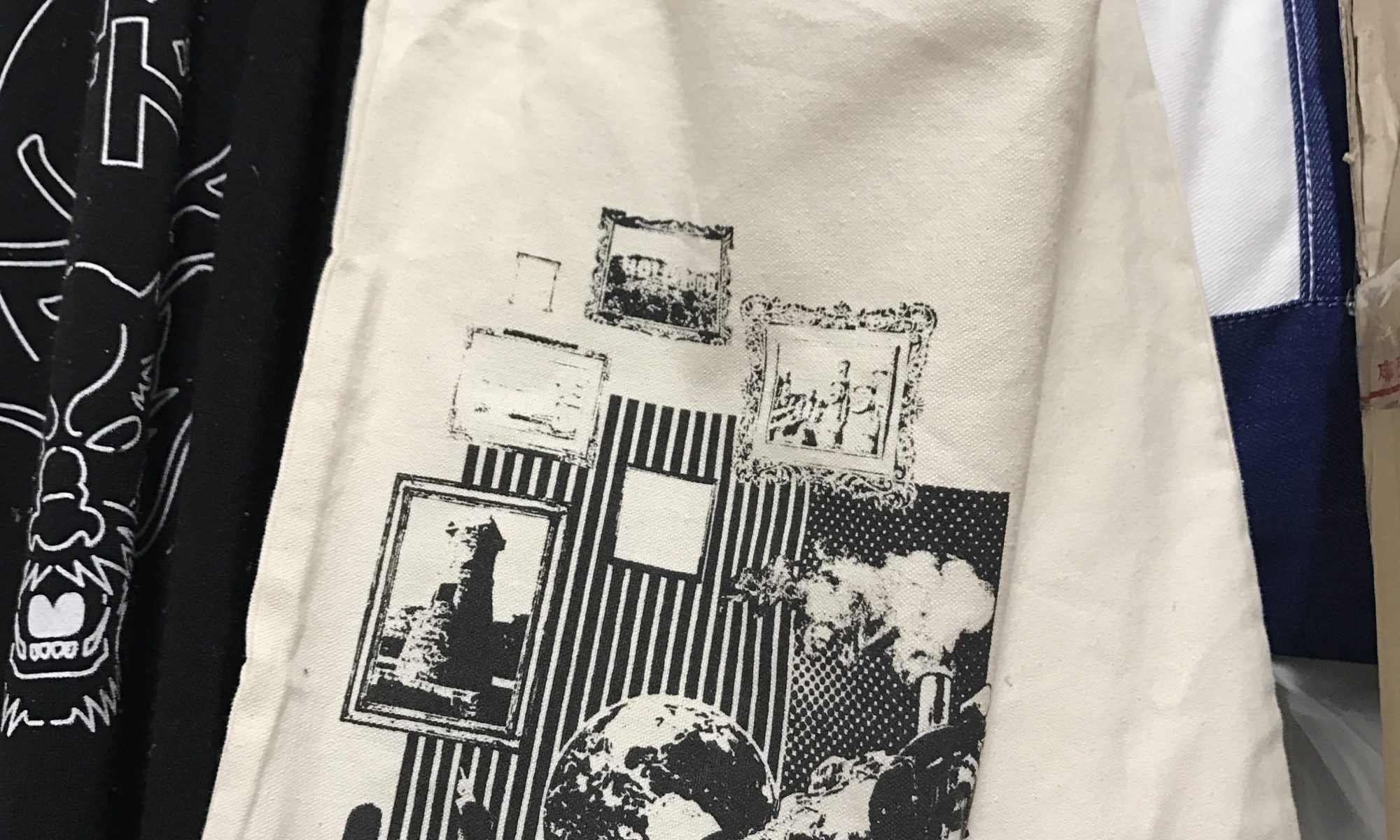 For our project 2 we were tasked with the mission of finding 4 quotes from either one or four different movies. Interpret the four quotes in our own unique way and create a black and white composition. We will eventually chose one of the four compositions and create a silkscreen that we would eventually screen on a tote bag.

“Life moves pretty fast. If you don’t stop and look around once in a while, you could miss it.”

This quote is from the movie Ferris Beuller’s Day off. This movie is about a group of three friends who decide to ditch school to enjoy the best day ever. They choose to enjoy their day to the fullest; from driving their father’s Ferrari, sneaking into a restaurant, watching a massive parade, and simply enjoying life. The entire movie is based off of the quote above, the world keeps moving and we keep missing those amazing opportunities around us.

My Take: I took the quote through an objective view point. I did not relate it to any personal experiences, instead I tried to make it more universal. Flowers are always the topic of beauty and meaning. Each flower carries its own meaning unique to different cultures. Yet we only cherish a flower when it is fully bloomed, that is when the flower is at its prime. But we humans are too busy studying about biology instead of observing it, working for nature but never involving themselves in nature, or immersing themselves in social media. We miss out the beauty of nature and the world even though it is right infant of us, proliferating right under our noses.

The flowers on the right are supposed to be dominating and overpower,  the dominance of the flowers represents that even though what we should is appreciate is that obvious to us, we are still oblivious to it. The people are even on a vast grassy field open to new possibilities yet still chose to be absorbed in the material world. They focus solely on studies and work that I chose to switch their heads with the tools they need to study and work. This irregularity of the human form draws our attention to it and makes us do a double take on the form. Originally, there were several globes that made up a hot air balloon with a person inside watching the flowers. Only this person was watching the flowers, everyone else was too busy. Yet, the hot air balloon and the woman took away from the composition as a whole. The composition looked chaotic and messy, which is why I chose to remove it from the composition as a whole.

“But it shouldn’t affect how you see yourself.”

Originally, I took this quote too literally. I would refer to the movie on more than one occasion and in the end my composition looked more like a poster for the film. However, after a group consultation with several members of my class I dared to reinterpret it differently. I chose to add a bit of a personal flare to the reinterpretation by relating it to my personal experiences.

As I was growing up, I dealt with a clash of different cultures. I would often be called a “twinkie” or “banana” as a joke between some friends because of my “Third Culture Kid” personality. Using the previously mentioned experience, I reinterpreted the quote. The quote to me is stating that though there are people out their would perceive you, want you, expect you to be a specific way just because of certain influences. Nothing should affect the way I see myself- I should be the only one having the final say about myself. Western culture tries to have a dominant influence in my life by “throwing” western culture in forms like media, morals, and ideas. There is nothing wrong with the influence, merely that I would like to keep a nice balance between the two.

The composition depicts a girl in a traditional Korean Hanbok, she is holding a banana in her left hand. The form of the banana is pointing towards the girl, drawing our eyes from the girl to the banana and then back to girl. The banana is meant to represent a “twinkie”. A twinkie or banana is a slang term used to describe someone of Asian race who has been strongly influenced by Western culture. The patches of designs coming down the right side of the compositions are a mixture of Korean and American symbols that are supposed to resemble a Scout’s sash.  A scout’ sash is supposed to hold patches that symbolize a mastery of a certain skill, in my case, finally finding balance between the two cultures. The buckets of white paint lead our eyes down the composition to the girl. The white paint came from the idea of “white-washing”. Originally, I was going to leave the background blank but a last minute decision urged me to find a suitable background. However, looking back, leaving the background white would have been cleaner decision.

“좋은신발은좋은곳 으로데려다준다”
“Good shoes will take you to good places”

I chose this quote because I was feeling uninspired from my previous quote. I was taking my quote to literally and kept referring back to the film. So to counteract this, I chose another quote. I looked at this quote with a fresh mind and a new perspective. Instead of just accepting and agreeing with quote, why not agree with it but take it one step further. Yes you need good shoes, but sometimes you need something more. A good pair of Louis Vuittons or Jimmy Choos will not get you to where you want to stand (whether it be fictional or a goal), it requires hard work and thinking outside the box. This is why you see flightless birds finally flying because they thought beyond the norm and created products that would genuinely help them fly. They have finally reached their goals, which will allow them to bigger and greater things.

The galaxy background of the composition is meant to represent the endless possibility of “good places” that you can be a part of. The midground shows Hogwarts and a modern mansion. This creates a sense of symmetry between the vertical axis of the paper and a distinction between the background and the foreground. Hogwarts represents the fictional part (much like Land of Oz) and the mansion represents the nonfictional dream (having a successful and stable pay-giving job). And entering the deep forest to reach their dreams are a bunch of people who took the wrong pair of shoes from the discarded pile in the foreground. The discarded shoes in the foreground were left their by previous travelers who have either given or up or discovered the secret. The foot prints follow the line of the snowy hills and swirls out into the background by following the galaxy. This ultimately leads our eyes to the flying flightless birds

“Feels strange to be going home, doesn’t it?” “I’m not going home. Not really.”

I took this quote from my all time favorite movie and book series, Harry Potter. Specially, Harry Potter and the Philosopher’s Stones. This quote was at the end of the movie when the trio were boarding the Hogwart’s Express back home. Harry states that he is not really going home because he has realized that his home (after 12 years of never feeling comfortable at the Dursleys house) is Hogwarts with his friends.

When I think of home, I don’t think of one specific location. I think of several different locations. Because I moved around a couple times, witnessed different cultures, meet new people, I have realized that home isn’t always the place you grow up or where you’ve always known. Home is where you make it to be, the place where the memories are fondest to you or the place where your family or friends are.

The picture frames contain pictures of the places that I lived. The two empty frames symbolize the possibility of new places I will live in in the future. Below the picture frames is a family looking up at the different locations. The father is pointing his finger at the frames, teaching the girl about the places that were and the places that could be her new home. And to the right of the family is a train that protrudes out from the earth, ready to take its passengers (the family) to there next destination wherever it is. The train has a slight 3D effect where it feels as if it is popping out of the towards the viewer, emphasizing the movement towards the future.

I ultimately chose this design to print on my tote bag.

I printed my screen on different bags and decided to choose the best from the ones I have already printed. This allowed me to take into consideration everything, from the positioning, overall paint distribution, and the color of the tote bag. And based on the thread count of the tote bag altered the transfer of the design and how much pressure we needed to apply to the squeegees. 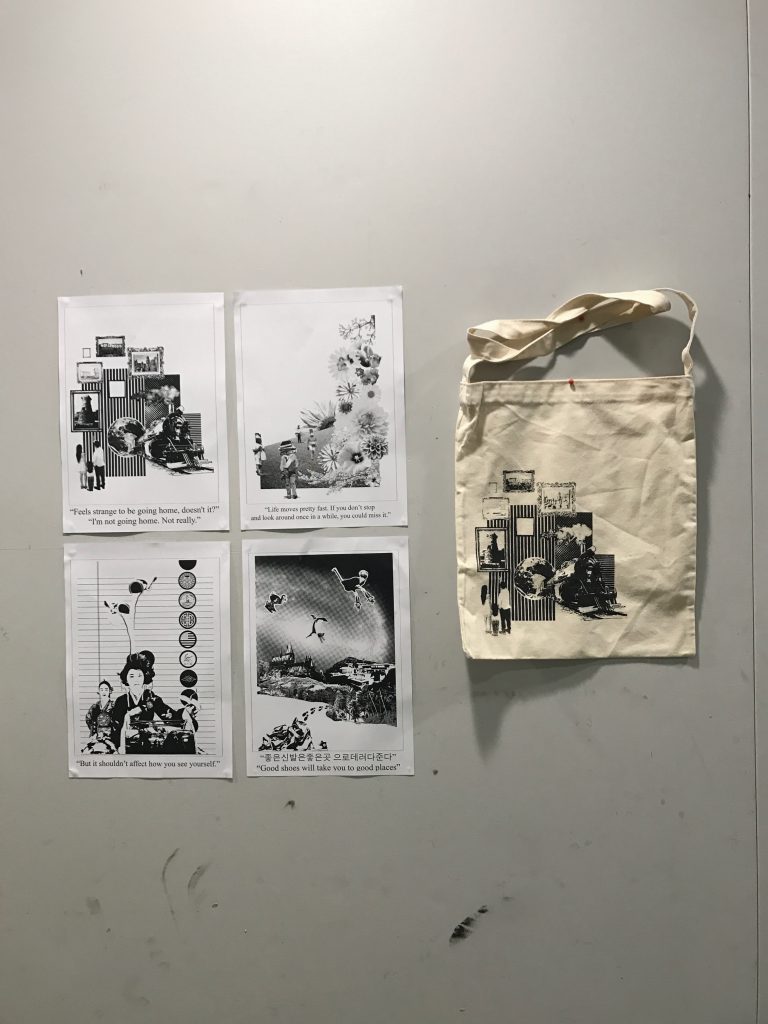