by Iskandar Ruhaizat on February 22, 2016 in Typographic Portrait (final)

Overall, the typographic portrait project is an amazing experience because I have lots of fun trying out stuff. I usually do digital imaging so for this project I’m trying to see whether I can do traditional methods as well. I also used to associate myself with Greek deities as a link to all my artworks and my love for theology and history.

Hello, My Name Is I And I’m Hecate’s Acolyte 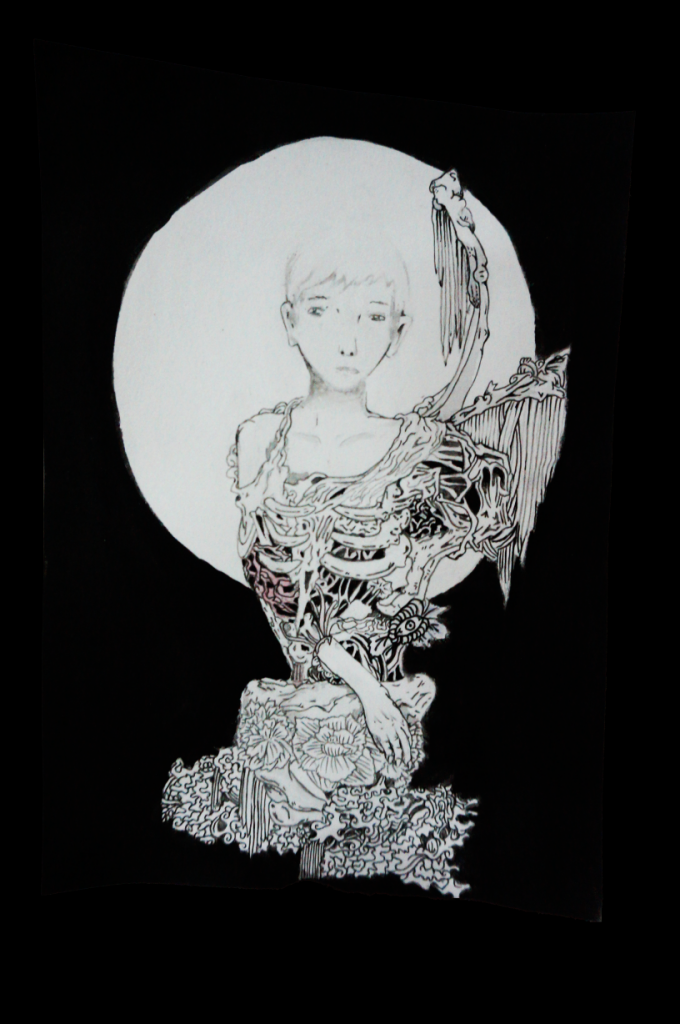 So I reach upon the crossroads,

I met the son of adam

and daughter of eve.

The son of adam bellowed, “Come this path, and experience patriarchy, glory, and masculinity!”

The daughter of eve opened her arms, “Or here, for the tender, nurturing path of the matriarch, 101 make up tutorials, and femininity!”

Can I traverse both?

“NO!” both cried. For you have to pick a path and forego the other,

For is everything not made in binary?

You pick one, and another person completes you.

You can’t complete yourself,

For what is then, do you live for?

I prayed to Hecate, the goddess of crossroads.

She who presides over trials, her two heads stern.

Why can’t I be both the son of adam and daughter of eve?

For do we not trace a lineage back to both?

The intersection of heads rumbled,

With the blessings from her new head,

I hewn a new path.

I aim to convey my agender agenda (ha, ha) through this piece. Using traditional mediums, I was heavily influenced by Takato Yamamoto’s pieces. The macabre body spells out my initial I, and it is tearing apart to show the frustration of not being able to conform to the traditional binary genders we are so accustomed to. Being Hecate’s acolyte, I am forever torn by decision-making and this constant worrying about fitting in to the binary gender roles will end up devouring me.

Symbolisms are used, such as the full moon (femininity), the eye on the left hip (outlook in life), three white carnations (purity, and the three-act structure in narratives) with one of the carnations blocked by the normal hand (end is marked by the present ambiguity and my current actions will determine the outcome).

Hello, My Name Is Isky And I’m the Heart of Hera 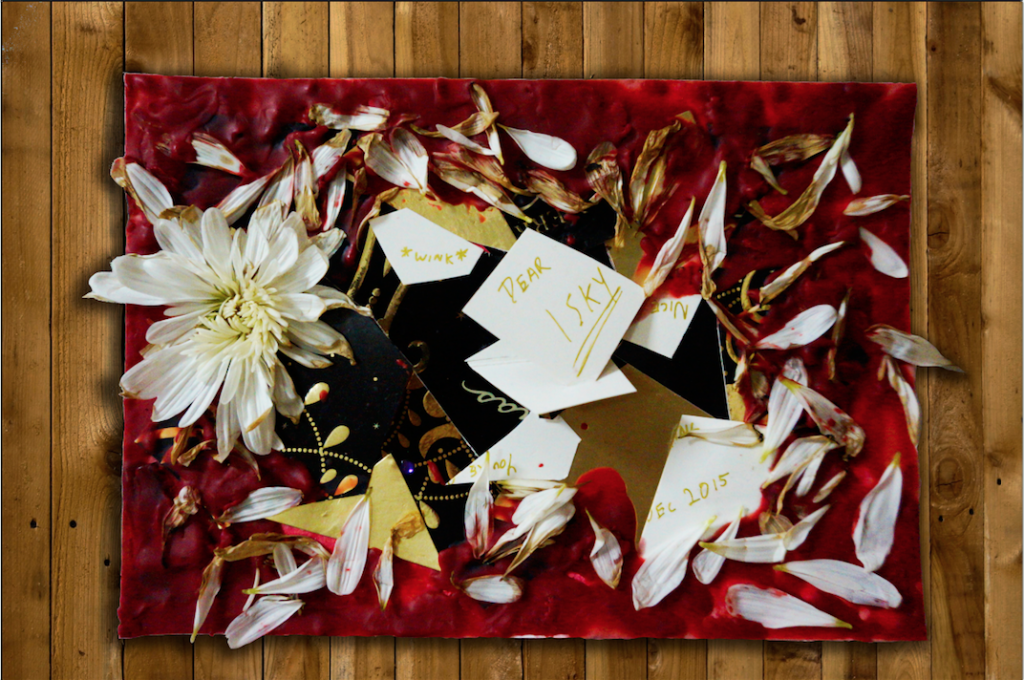 When You wrote words laced

with honey on fancy cards.

For they will turn into bitter lashings that

strikes deep in the recesses of my being.

I learnt a lesson on not picking roses

For their thorns prick once you’re lulled

in a false sense of love.

Still fresh with the scent of your

the wax with my burning anguish.

Hoping I will seal you and your kind out forever.

This portrait is in done mix media utilising unconventional methods of portraiture. I’ve decided to use items that were given to me by admirers. Initially the idea is to create concentric circles out of all these items but A5 is a little too small so I ended up layering the over the other. This is to represent the walls I built as people try to get close to me, especially when it comes to forming intimate relationships.

I got the inspiration from Khalil Gibran’s line, “A pearl is a temple built by pain around a grain of sand” (Sand and Foam). This inspired me to do up something that is layered and what is more painful than the tangible items of ephemeral lovers? I do hope that by languishing the items (instead of throwing them away, making them into an artwork), I will be able to sort of clear myself of burdens from past relationships. New year, new me~ (lol ok)

My name here is Isky and it is a pet name that people call me. Somehow, people who are not related in my different circles of people that I know will end up calling me this, which I find amusing. The interesting thing about this is that my name here is actually written by the person who gave me the card.

Hello, My Name Is Isk And I’m Hermes’s Prodigy 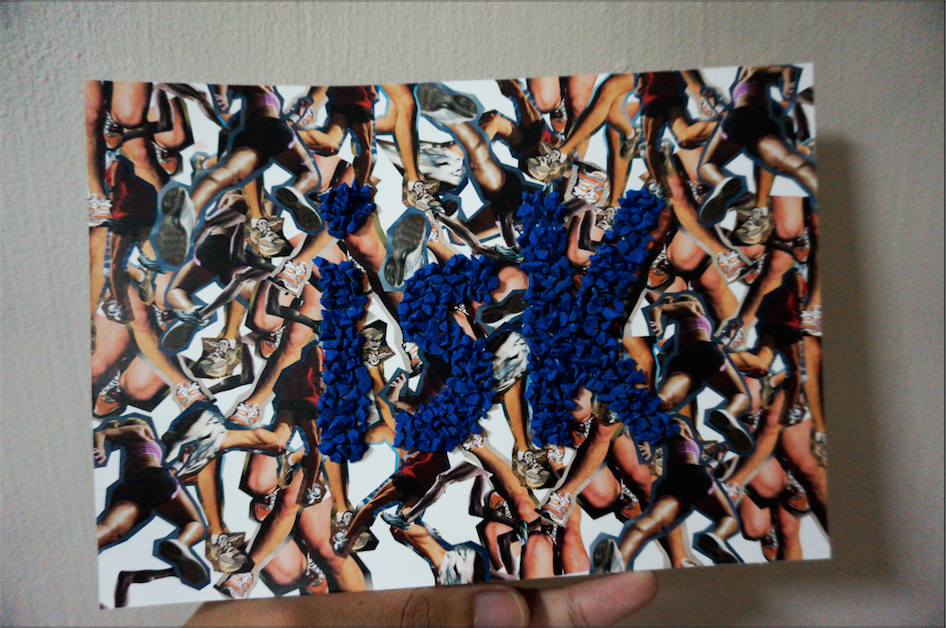 The greatest form of euphoria is when you run to the point of exhaustion. When your legs went numb and the breeze whispers sweet nothings. When your senses start to go on hyper drive. Your eyes start to form white vignettes and little blurred discs. The butterflies in your stomach yearning to burst forth in multitudes of iridescent scales. As Tahitian vanilla and cacao from the most recent bath assaults your olfactory, you struggle to keep the butterflies in.

Influenced by Hannah Hoch and Rex Ray, I combined Ray’s contrasting colours and Hoch’s narrative and shocking approach for this piece. The “pebbles” collected from running tracks provided a nice contrast against the collage of running legs that seem to shout “I RUN! YES YOU BETTER BELIEVE IT!” People seem to don’t take me seriously when I said I run. This piece acts as a way for me to shout at them naysayers without raising my voice. This is done mix media, with the collaging done digitally and the “pebbles” glued after.

My name here is Isk as this is what my army guys call me, and they are the most incredulous to believe in my ability to run.

Hello, My Name Is Iskandar And I’m The Son of Aphrodite 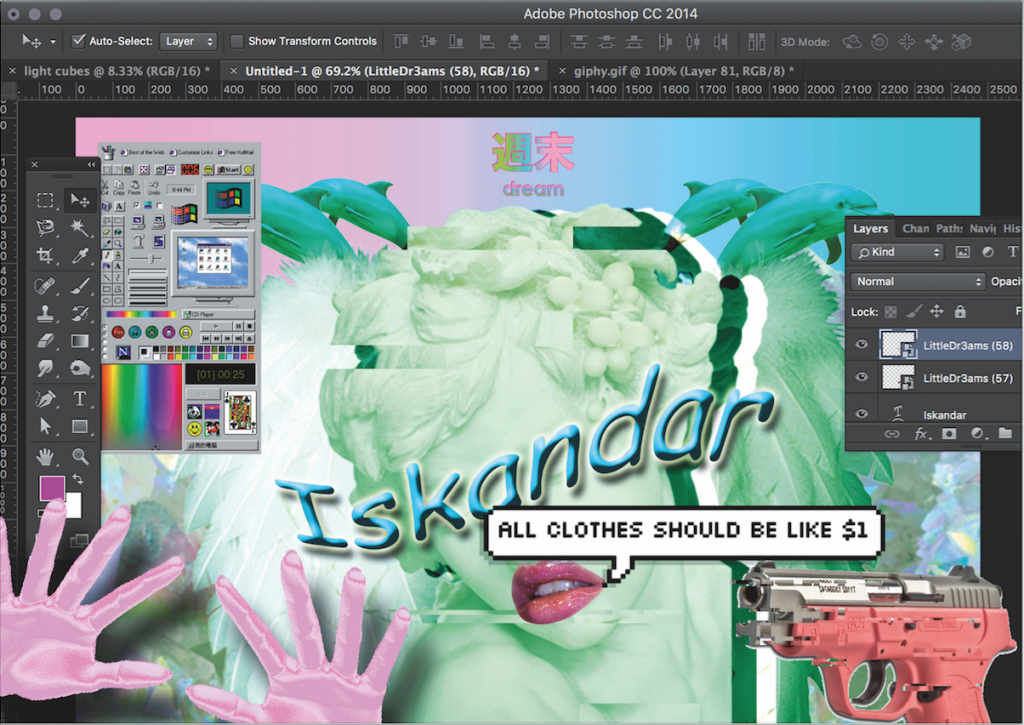 Hear, hear! Those born of foam.

You watch the twin-tailed undine frolic by the beach,

her admirers swooned by her witch brew

of caffeine and saccharine.

All dressed in their

Hear, hear! Those born of foam.

Why beach yourself on the shores when

you can float merrily on the waves?

Heavily influenced by the Vaporwave (specifically Seapunk) micro culture and 90s aesthetics combined with sea-inspired colours such as aqua and all things oceanic, in theme with Aphrodite. Incidentally, the Pantone colour(s) of 2016 is baby blue and baby pink.

I wished to represent myself as a child; gets nostalgic over fond memories and an innate wish to relive them. I appropriated various pieces of artworks and make it deliberately kitschy to show my imperviousness to the opinions of others. Thus, I used my full name in full comic sans glory: Iskandar.

All other images by littledr3ams

I feel that I need to work more in documenting my process and research.