by Iskandar Ruhaizat on September 24, 2018 in Process, Project 2. The Landscape

When you’ve sunk so deep into ennui you couldn’t get out of that sinking despair and listlessness. You’re trapped by the bars you’ve built around yourself and wallow in the abyss of self-doubt that even to get out of your predicament seems like an important task even though its just within the grasp of your hands. Your yearning glazed your eyes, tinted it in hues of rosé, taunting and reminding you that you can never reach the Elysian Fields.

From this image, I separate the background and foreground so I can edit them individually.

Starting with the background, I put a warming filter and decrease contrast to its lowest to create an ethereal feel with a warm glow to contrast against the foreground. The I adjust the colour balance to achieve a greater tonal variety before adjusting the curve to make the image more ‘washed out’. 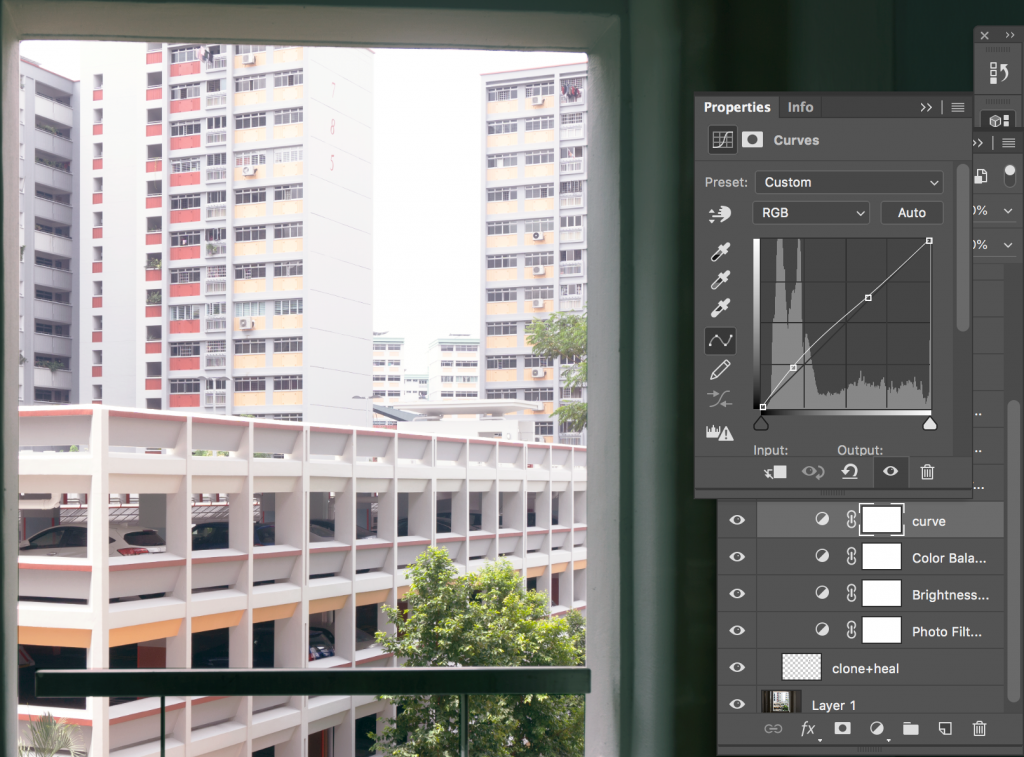 Felt that the image was too yellowy so I added a hue/saturation channel mask to get the colour I want. I still couldn’t get the colour I needed so I used a violet filter. The issue I had this with is that it completely washes away the other colours so I used a mask to individually colour the reds, oranges, and yellow. A pain in the ass, I must say. Then I realised there is corrective colour! Whichhh I could’ve used but I already picked out the colour I needed and I’m quite happy with it so I leave it be. I feel that this visualises the yearning for the outside world/reality through rose-tinted lenses. 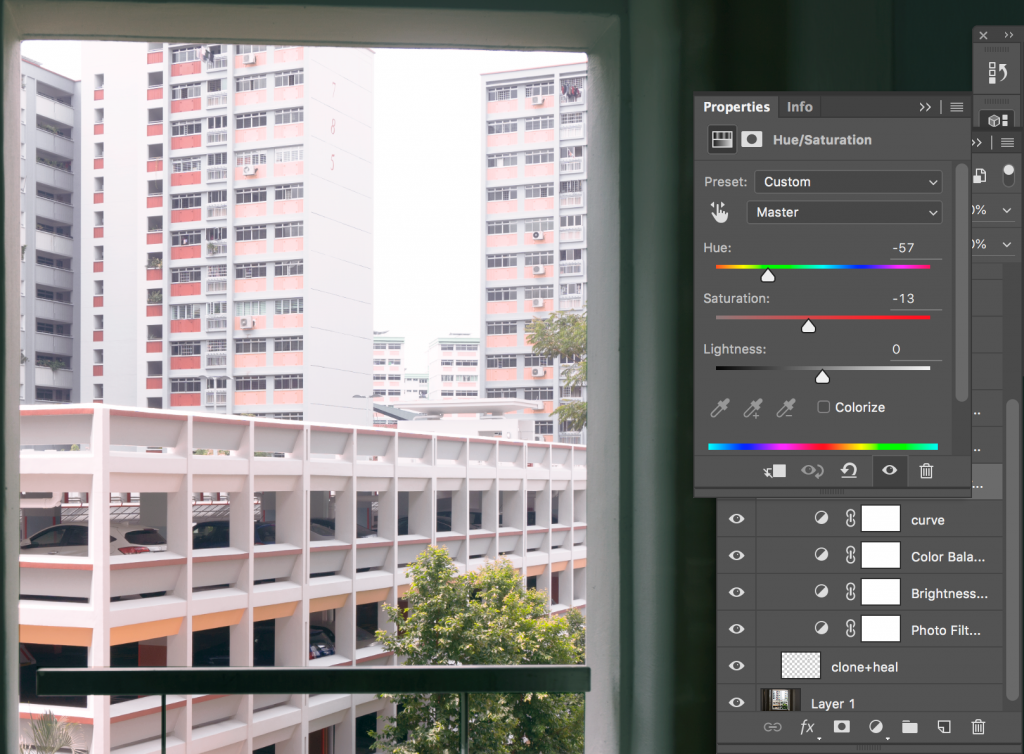 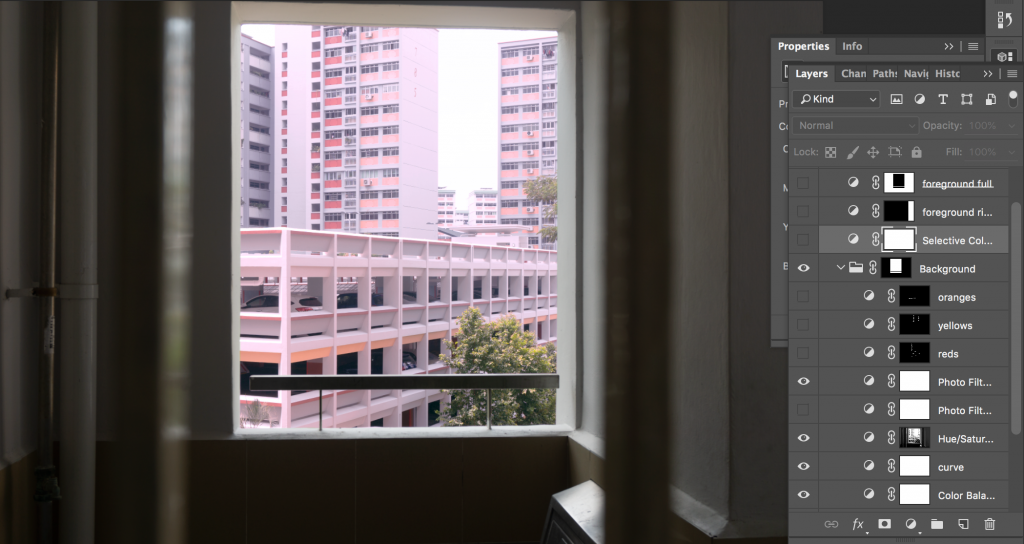 Find that the image is too pinkish so adjust the whites in Corrective Colour. However, I placed this layer above the background layer as I want it to be affect both layers so that I will look as if light is pouring into the space (I mean, it is already, just wanna emphasise it). 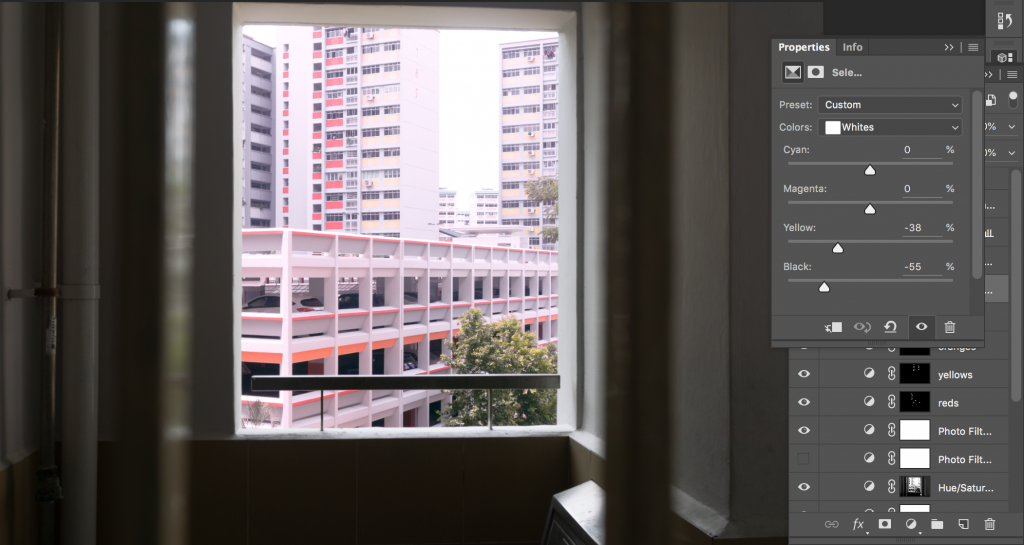 For the foreground, I envisioned a mood that seems removed; that feeling of being submerged in water. I mask out the right side of the image to cancel out the lit areas and add a a colour balance to get that aqua colour that best represents ennui. 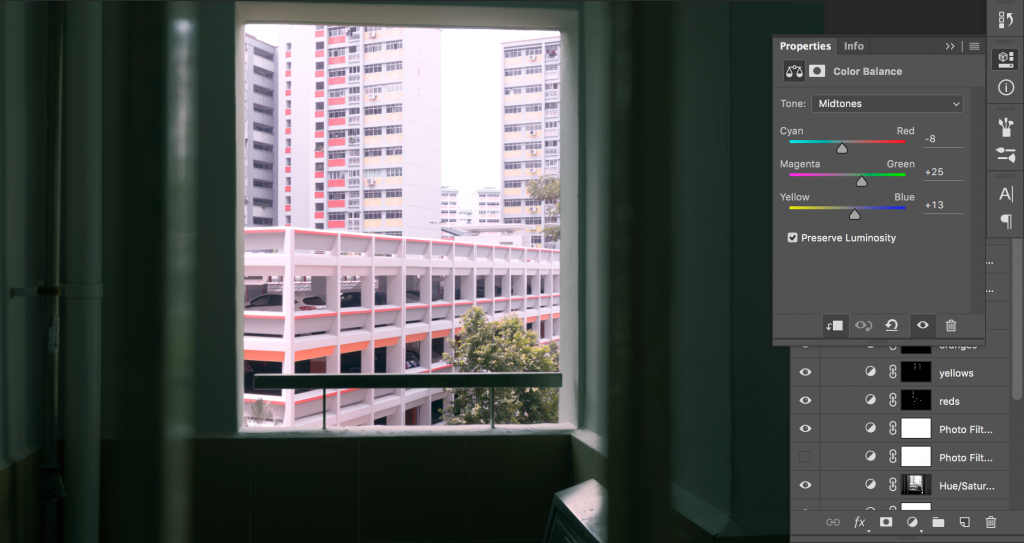 I achieved this colour by increasing the green and blue in the midtowns and the cyan in the highlights. 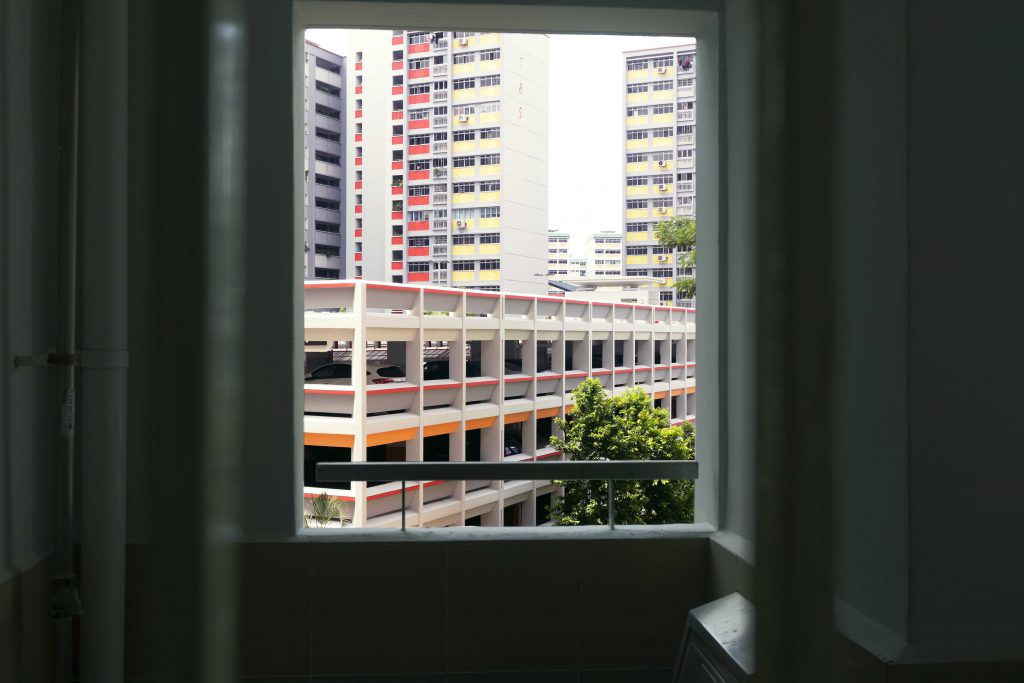 Played with the blues and greens to create a melancholic and distant mood in the foreground, with the background of high-rise buildings – things outside the window – to be brighter, with an increased contrast with the warm colours. The presence of the pipes and steel beams further emphasised the ‘coldness’ of the foreground, a space lacking the ‘human’ presence.

The diagonal line of the carpark breaks the army of vertical lines in the image and also adds depth.

Initially took a series of photos around Little India and then realising I DIDN’T TAKE THEM IN RAW so retook the photos.

Some outtakes from the initial series of photos: 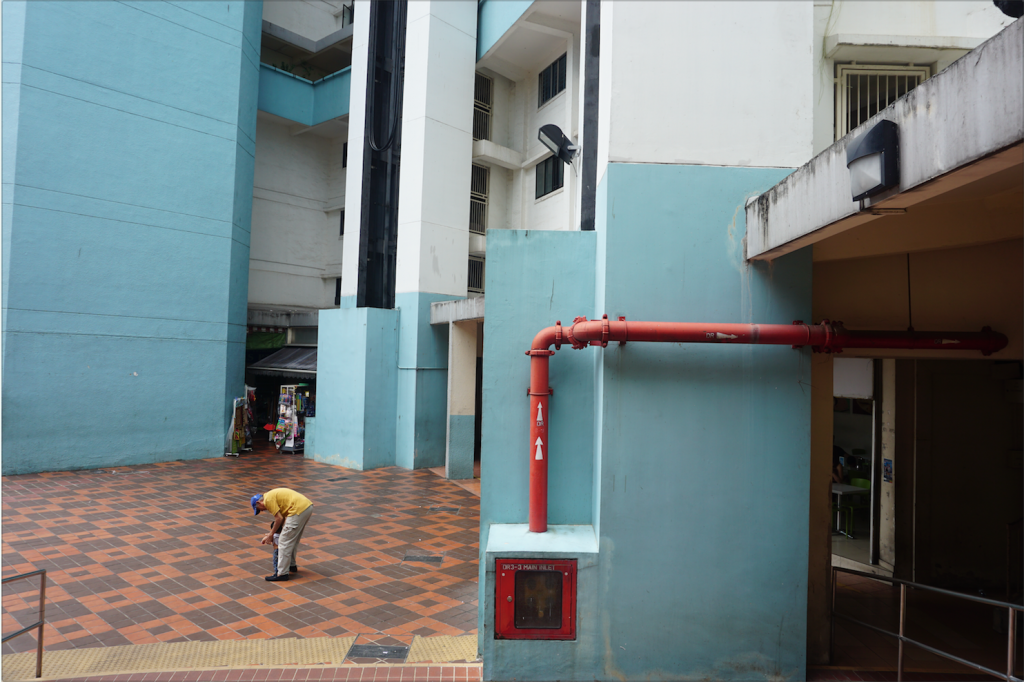 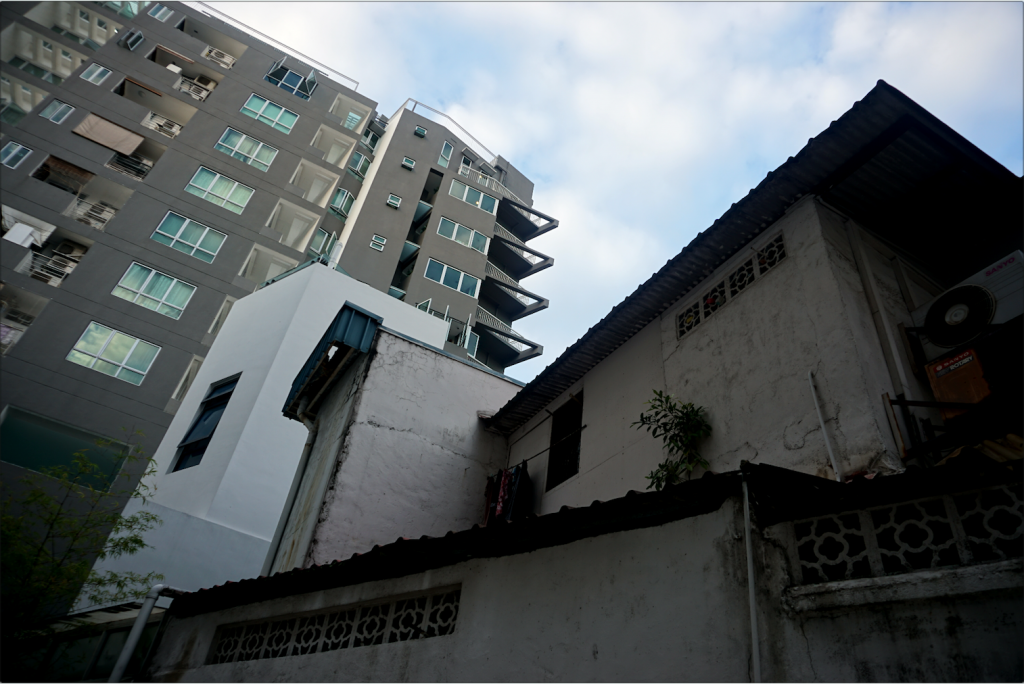 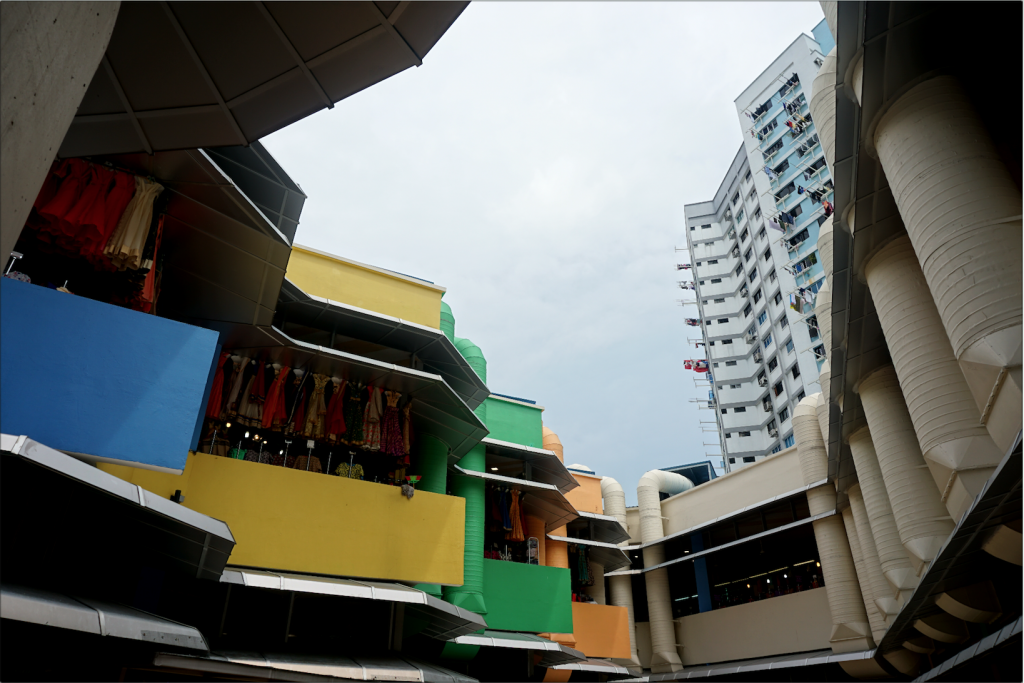 3 comments for “Assignment 2: The Landscape”