Some ideas for interaction.

Fish will change color when it is triggered by the player.

Red fish will leave a trail as it swims

Ink Trial of two fishes will interact with each other.

Final product will not be censored.

What is good design?

Good is defined in relation to societal laws, regulations, agreements and contracts. We cannot reach a simple definition of what constitutes good design.

It is, in Lowgren’s words, “a designer’s most important task .. to develop her judgement, by critically and independently formulating her own assumptions and beliefs.”

Good design stems from a keen eye and a taste that has been developed over the years, but how does one begin thinking developing such taste?

Lowgren proposes a set of ideas and guides that is meant to allow designers to be critical and reflective. In his own sense, he is attempting to give the ‘material without qualities qualities.” 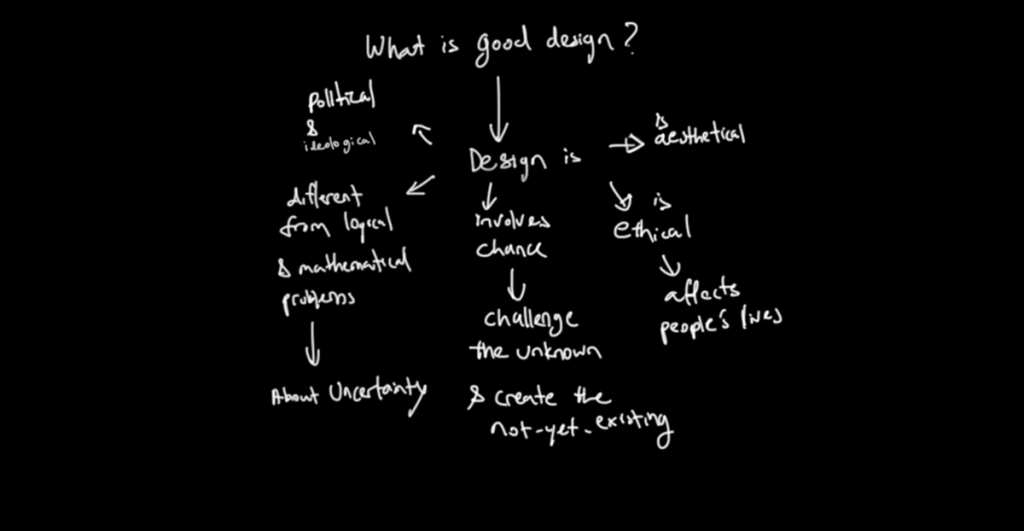 The term interaction design was first coined in 1980s but it was only in the previous decade or so that the idea begin to take form. Lowgren uses a set of parameters to define the challenges that designers need to understand and reflect upon as they create these works.

What i find particularly useful is the ideas and responsibilities that Jonas Lowgren is championing for designers to tackle. These guidelines give designers a set of standards to uphold themselves onto and gives themselves something tangible to understand their own works.

I think that this is particularly interesting when i begin to use this framework to understand my own medium, mainly games. A couple of years ago, it is rare to think of games as a medium that is good for something anything other than fun and entertainment. Yet in the past decade or so, there has been a rise in the ‘practical’ use of games.

Serious games has been for a while been used to make a statement, either through using empathy  or through sharing a different perspective. Games allow us to put ourselves in positions we otherwise would not be able to experience.

A political statement about the act of ‘counter terrorism’ leading to the rise of more terrorists, September 11 gives players the agency to react and kill off the terrorists , only to harm innocent people and create more terrorists as a result.

It is simple and yet powerful, playful but also horrifying as we begin to understand the impact and significance of the actions we support and how it affect the lives of others. 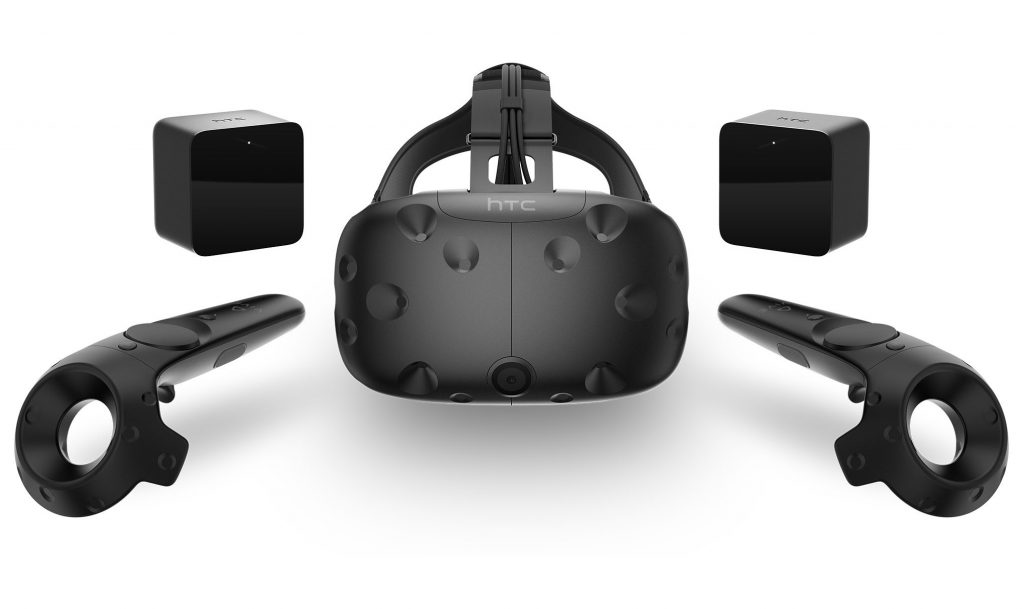 The immersive experience can only be described as surreal. In a large enough space, it is difficult to not give into the suspension of disbelief that one naturally indulges in inside a VR world. In  game, I almost feel like I am standing on the edge of the cliff or pulling a long bow. The haptic feedback works well giving a degree of illusion of touch. 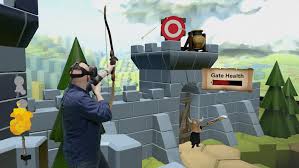 The 2 camera maps out the location of the player in real space and translating that in game. The stereoscopic vision through the dual screen creates a  sense of depth through use of perception. Recently Nintendo has announced a hybrid console. One that is able to function as a console + controller at home ( above) and a mobile portable console, ( below) . Nintendo’s reveal for the switch has generated huge hype. From my perspective, it is because the Switch is designed to solve a few problems that plagues  modern day console.

Fish moves towards point but the rotation is off. So it flops lifelessly.

One of the most important concepts that revolves around design is that the design is the function, not just a form of  aesthetics. I think this was promptly brought up in the article Digital Age.

Design needs to serve human needs and goals.  Understanding the problem from multiple perspectives is crucial to the design process.  For me this is essential in both games and web. The function of games is play and a lot of emphasis of web is interaction and information. Designing without understanding the problems that it is trying to solve makes the design irrelavent.

How well does detailed design work well with something that might be hard to truy prepare for such as  interaction and user experience?

Yang is a media media artist from China .

I first saw his works in ArtStage and was very impressed by this huge landscape painting that clearly took reference from Chinese painting. However when taking a closer look, it became obvious that this was a photo composite made from images of modern buildings. Perhaps the most interesting thing is how Yang hides things in plain sight. Having had 10 years of experience in calligraphy and Chinese painting, Yang shows obvious mastery in his composition. From far, it is almost difficult to realize that this isnt painted but made from images that he has collected over the years from his travels as well as where he lived in. 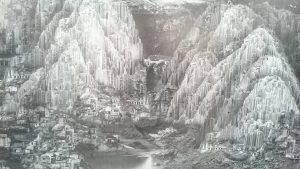 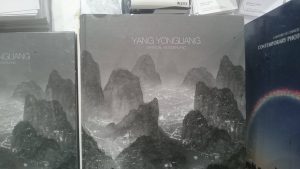 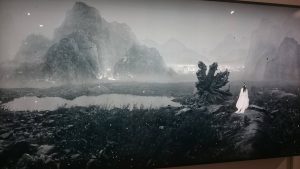 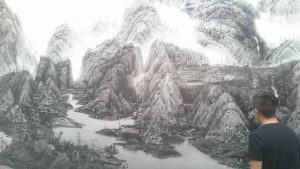 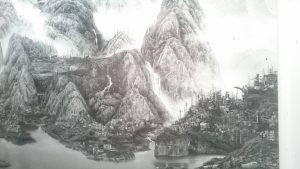 This picture is imitating the old traditional Chinese landscape painting, what we called Shan Shui. Like a typical Shan Shui painting, there are mainly mountains in the painting. It is in black and white color; also, it is compose in wide and horizon. We can also see there are many red stamps sealed on the painting. These all are the features that show the style of Chinese painting a lot. When we look closer, the audiences will discover that the jagged surface of the rocky mountains are actually composed of densely-stacked concrete buildings. Besides, in the foot of the mountain, there are some cranes. Also, it uses a lot of blank especially and this shows a great mood and emulate Chinese-style vintage.

Growing up in Shanghai, I was surrounded by lots of traditional architecture – and saw a lot of it removed. China has changed so much, dismantling its heritage in the pursuit of urbanisation. I want to ask questions about these things, about consumerism and how we live today. The rate of change is a major concern. To catch up with western economies, a lot of local customs are being lost – even the way we eat, the way we talk. It is the same with contemporary art. It feels like great traditions are being given up, at least partially, as we switch to the western idea of not only making art, but marketing and selling it.

I think what captivates me about these works is a combination of both the sense of connection to Chinese art I feel and the modernization of it. It is tr

ying to hold on to what makes us who we are while adjusting to the new world. He’s art reflects the multiple layers of what defines us and he uses it to give emphasis to his statement, which I truly believe has more impact.

I love the serenity of Chinese painting and Yang has opened my eyes to how an old dying art form can be brought back to life through new media and new technology.

For me Art is something that is constantly evolving and constantly changing to reflect the society.

One of the games that inspire me is a first person puzzle platform called Portal.

Portal and Portal 2 is one of the most amazing level design in game. Every level, every room, is trying to teach you something while trying to kill you. Each room has a puzzle that helps you to either enhance what you learned, or shift your perspective on a problem and think out of the box.

Story is also pretty amazing. The character motivations are really clear and concise, allowing us to feel connected to each character in the game. 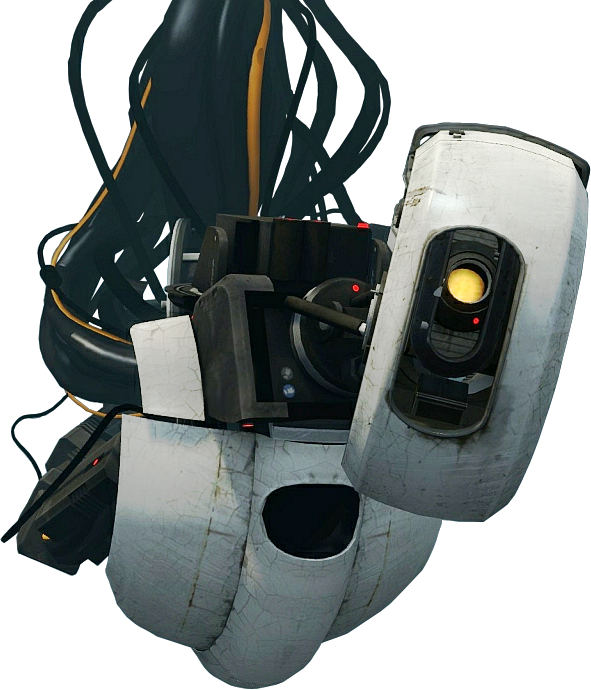 She is a bitch

She will try to kill you but she is program to test you constantly. 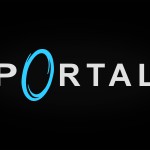 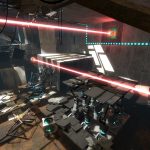 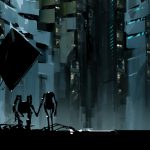