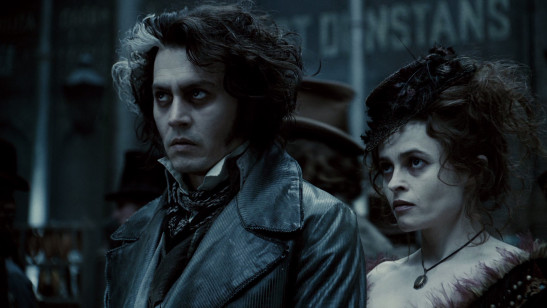 German Expressionism originated during the World War I period, when Germany faced isolation from other countries. In 1916, the German government had banned foreign films, and this led to an increase in local film production. In many ways, the German Expressionism movement is a reaction to the devastation and horrors of the war faced by the Germans.

The themes behind German Expressionism films often revolved around insanity, chaos, death or fear, which embodied what the German people faced during World War I. The films are usually characterized with dark, stylized sets, exaggerated acting, distortions of space and heavy use of shadows. Chiaroscuro lighting was also used in these films. The extreme contrasts of light and dark creates dramatic shadows. 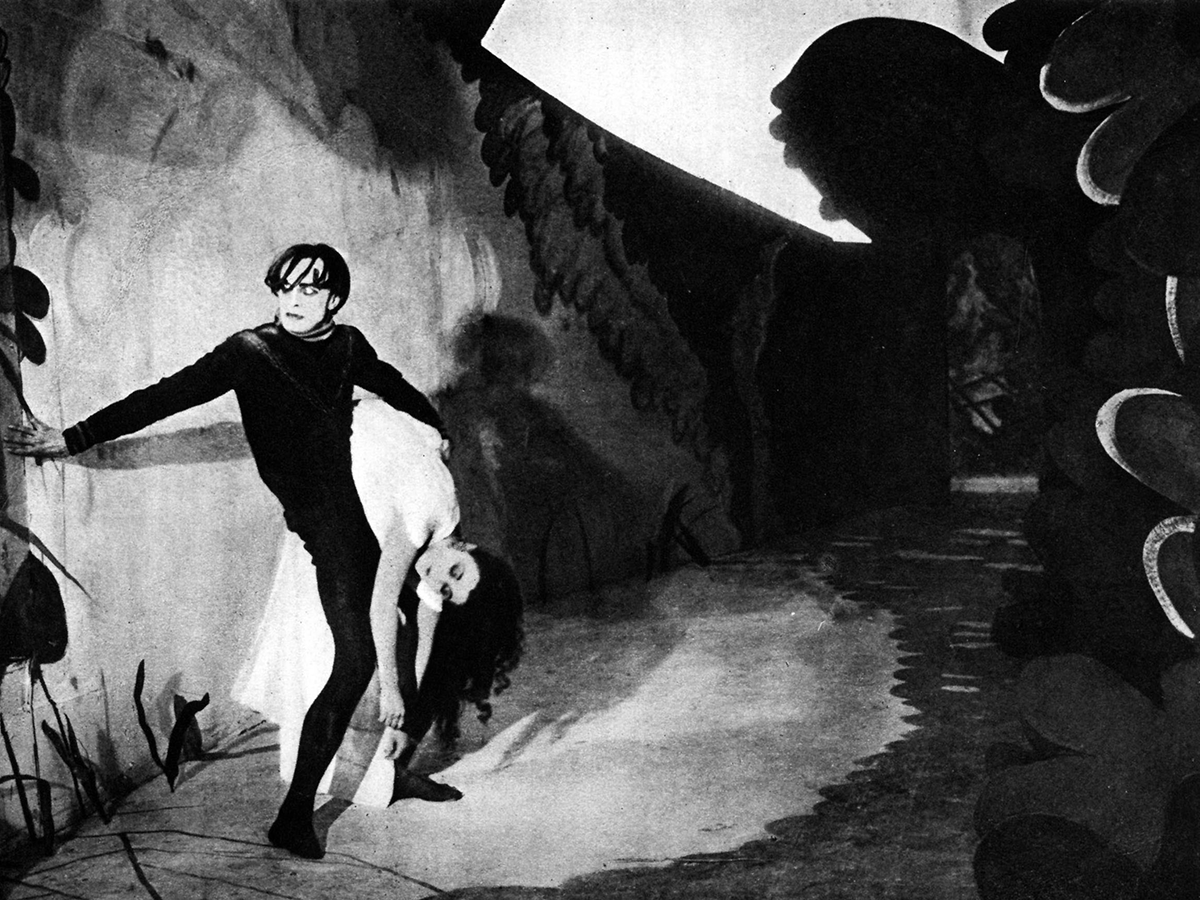 Take Tim Burton’s Sweeney Todd: The Demon Barber Of Fleet Street (2007) for example, the setting and mood for the entire film was gloomy, dark and sinister-looking, a result from the use of chiaroscuro lighting, deep shadows and angular shapes. These elements are commonly found in German Expressionism films. 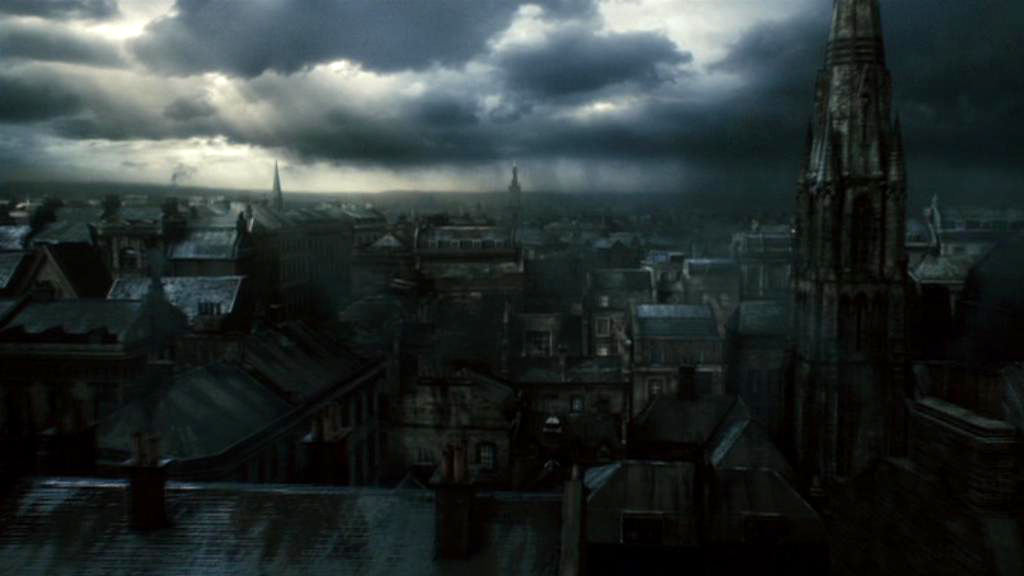 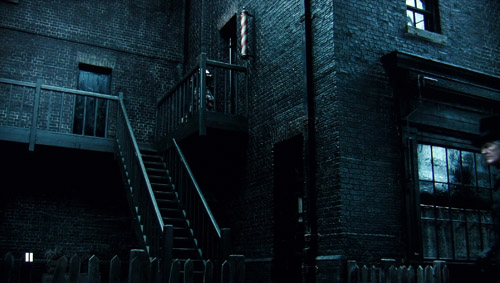 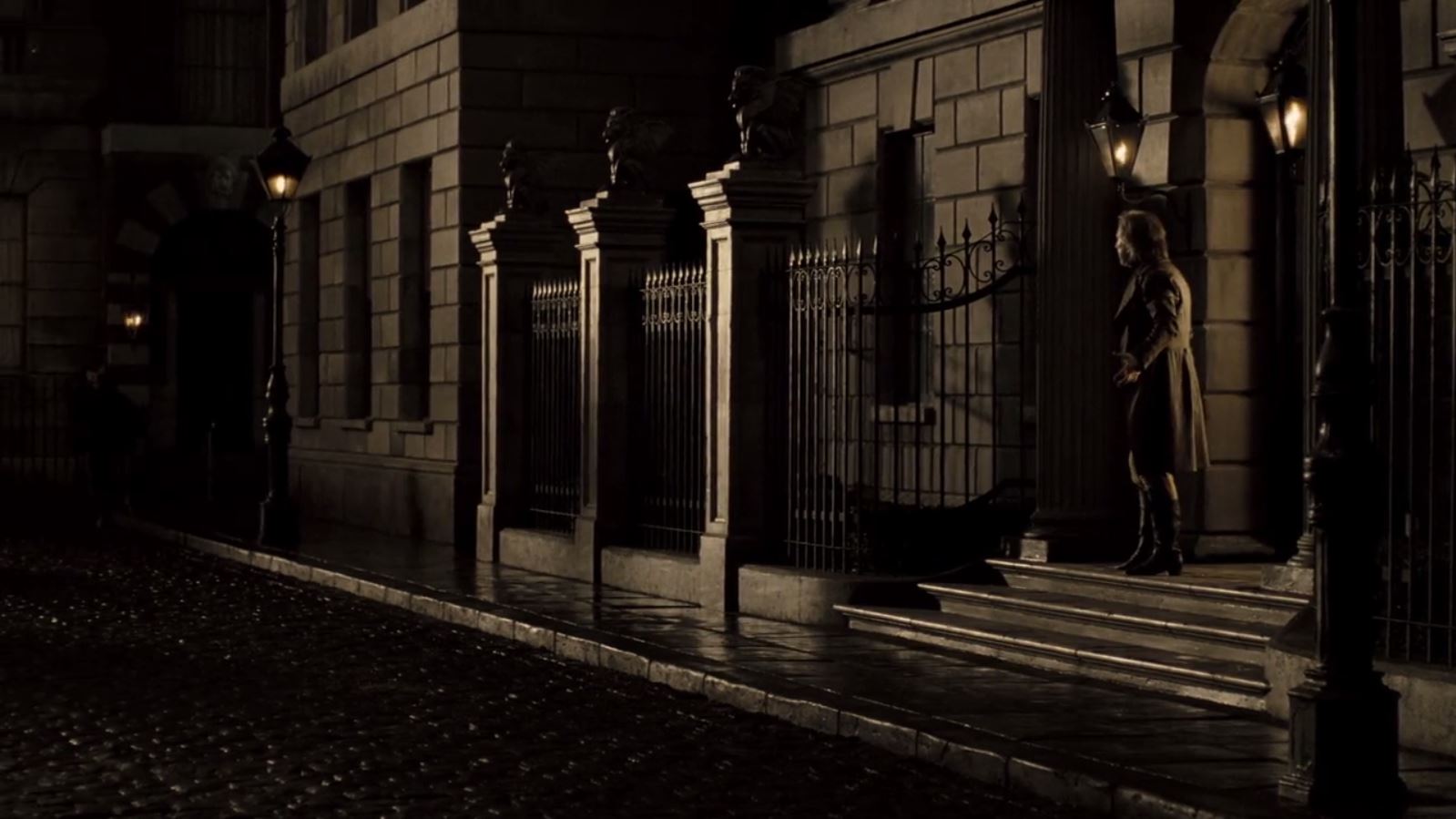 Note the similar use of slanting angular shapes, harsh shadows, and disproportionate windows in Sweeney Todd and The Cabinet of Dr. Caligari, portraying madness and alienation from society. 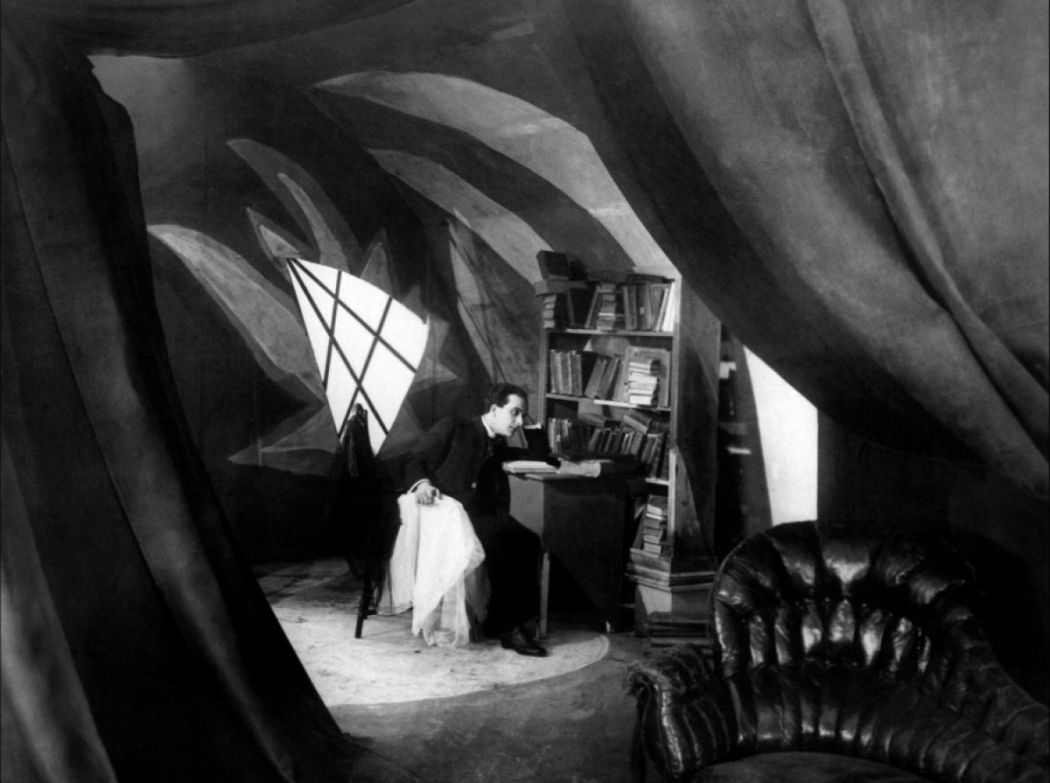 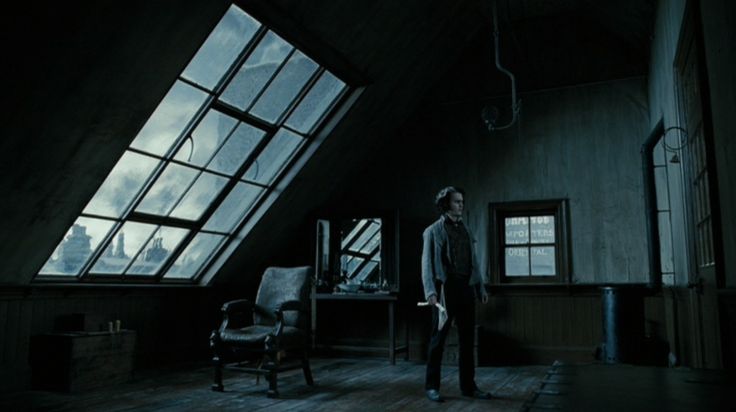 In a large part of the scenes, Sweeney (Johnny Depp) is partially covered and hidden by shadows, to amplify the menacing nature of his character. 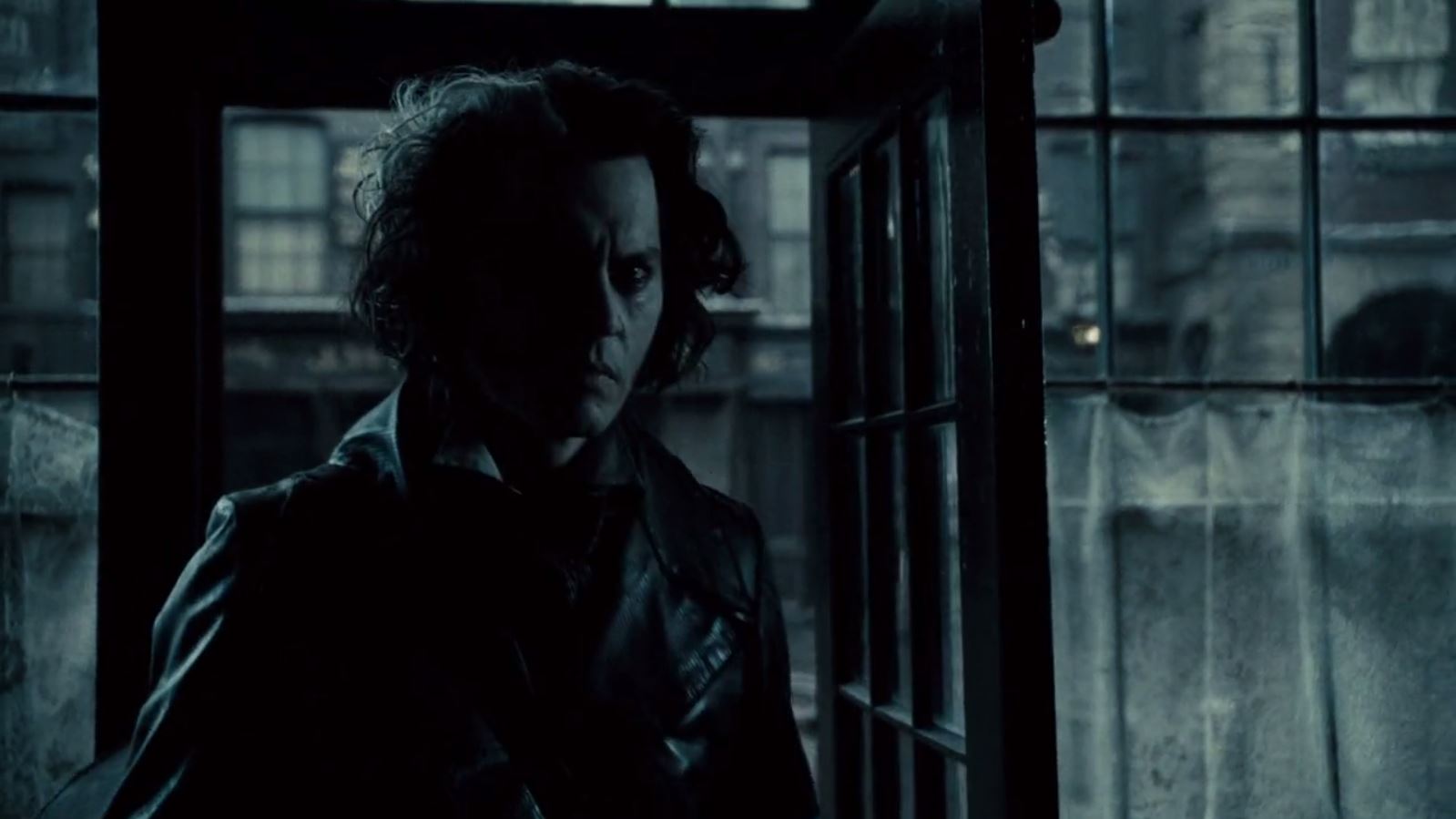 Distortions of body or objects are also characteristic of German Expressionism. The distortion of the character’s faces suggests insanity; and the cracked mirror symbolizes the shattered life and personality of Sweeney, and also possible foreshadowing of his impending death. 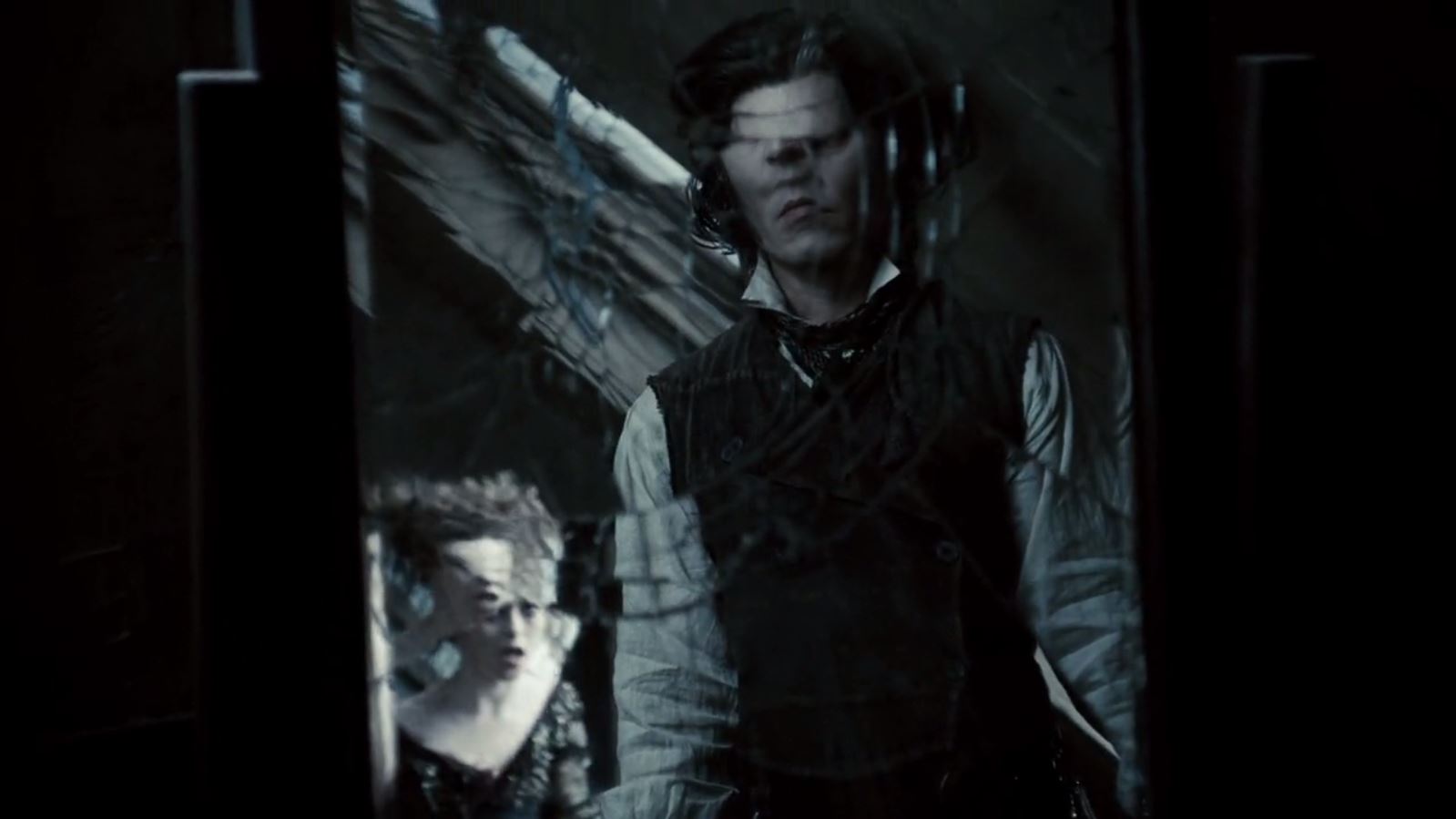 – Dark, gloomy sets with sharp, angular and irregular shapes (buildings with varying heights, pointed roofs, disproportionate windows, angled stairs, etc) upset the sense of equilibrium and bring out the fear and chaotic imbalance of the world: 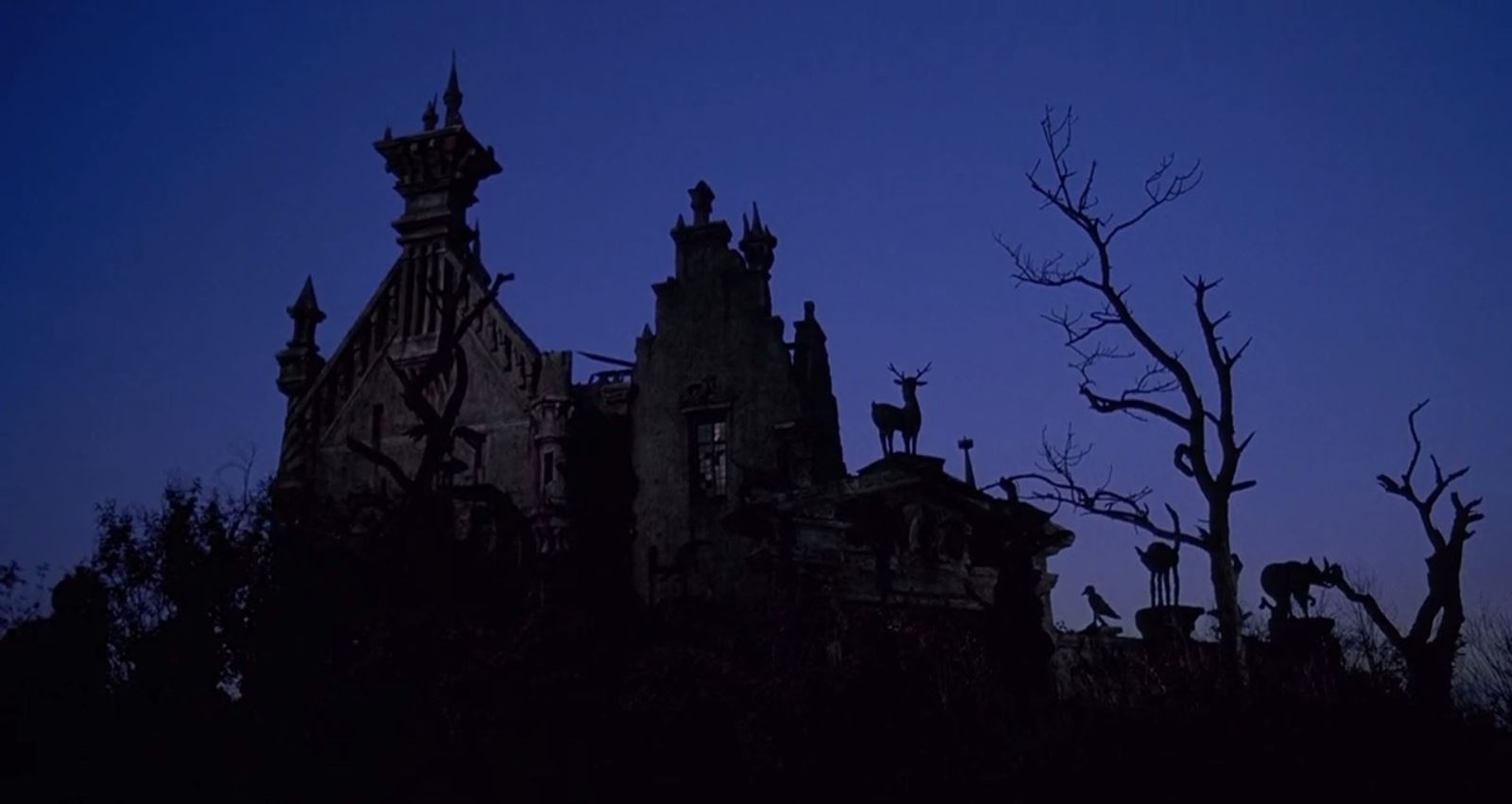 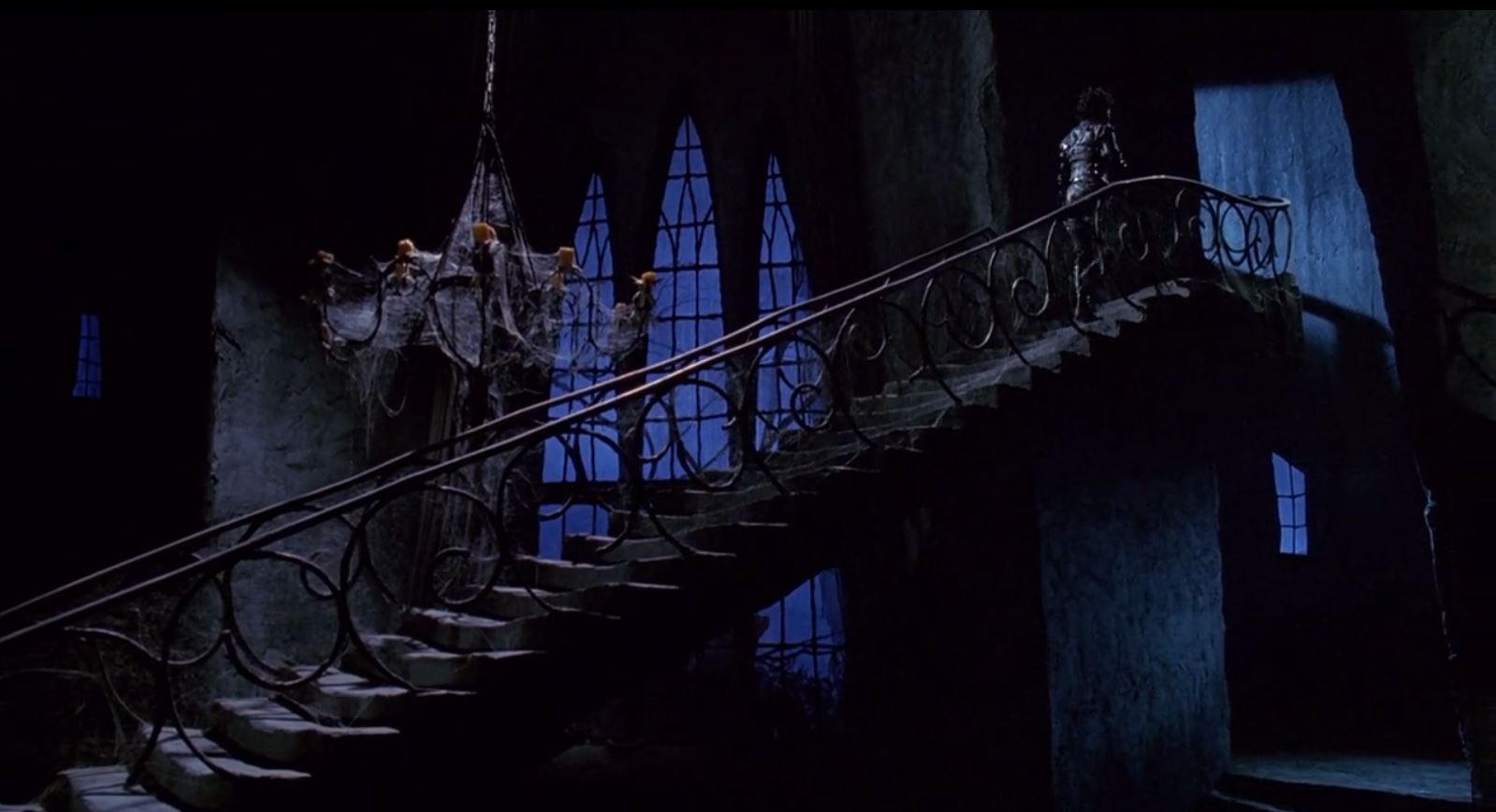 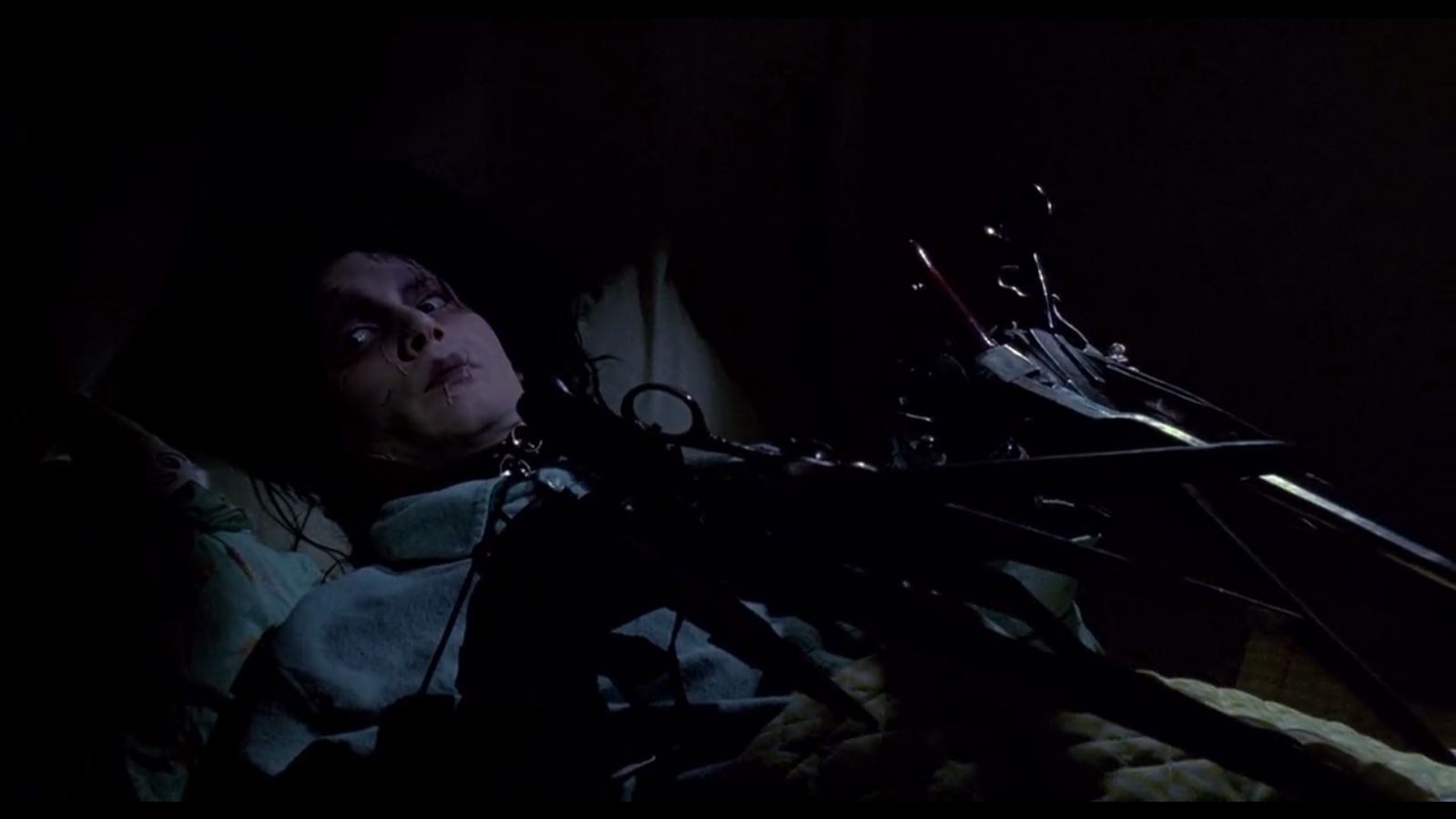 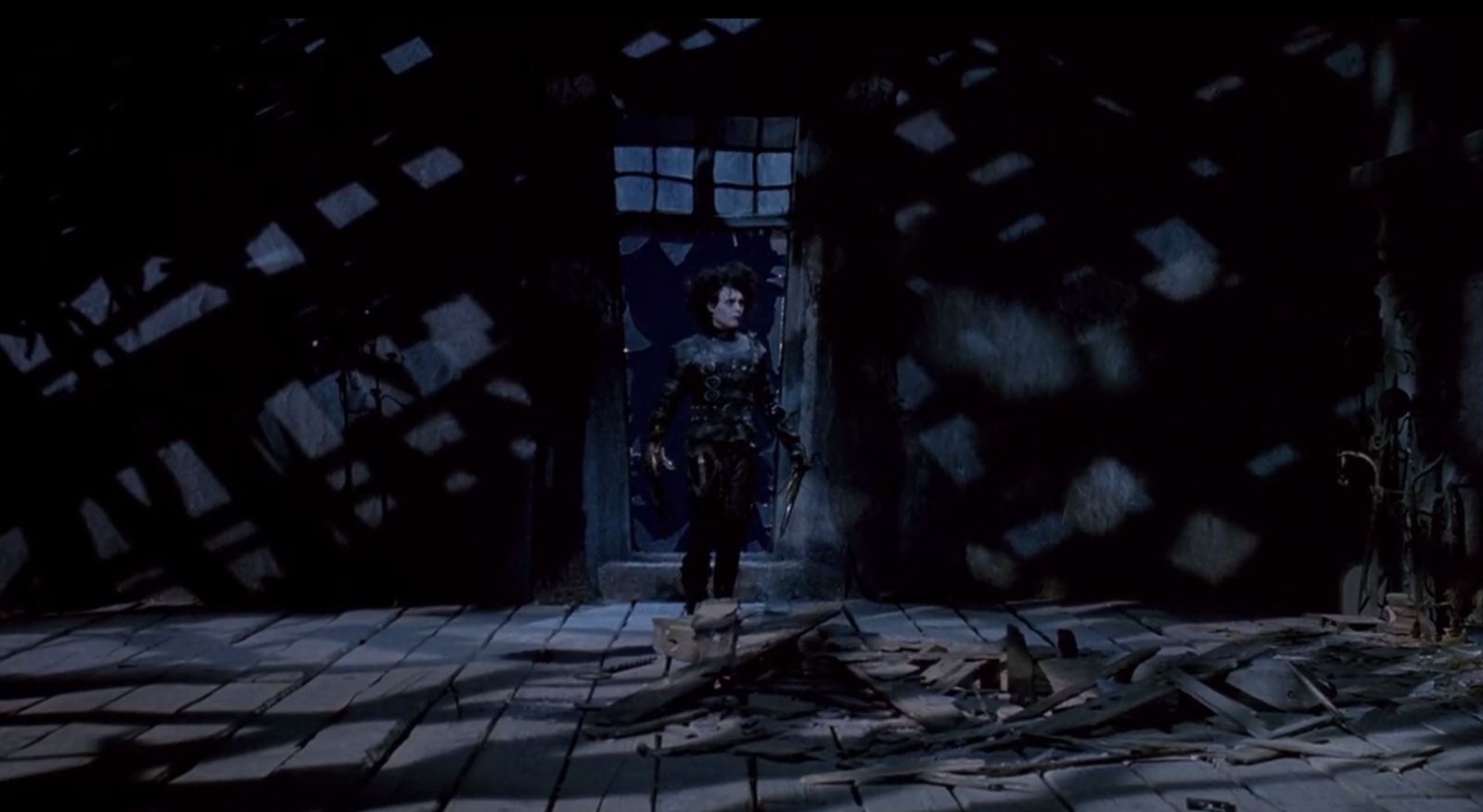 Another noteworthy similarity characteristic of German Expressionism is the exaggerated Gothic makeup of the main characters in Tim Burton’s films. The main character in Sweeney Todd and the character of Edward Scissorhands bare a close resemblance to the character of Cesare from The Cabinet of Dr. Caligari. They all have pale faces contrasted by black hair that are unruly and out of place, dark shadows around all of their eyes, and also the obvious lack of joy in their faces. 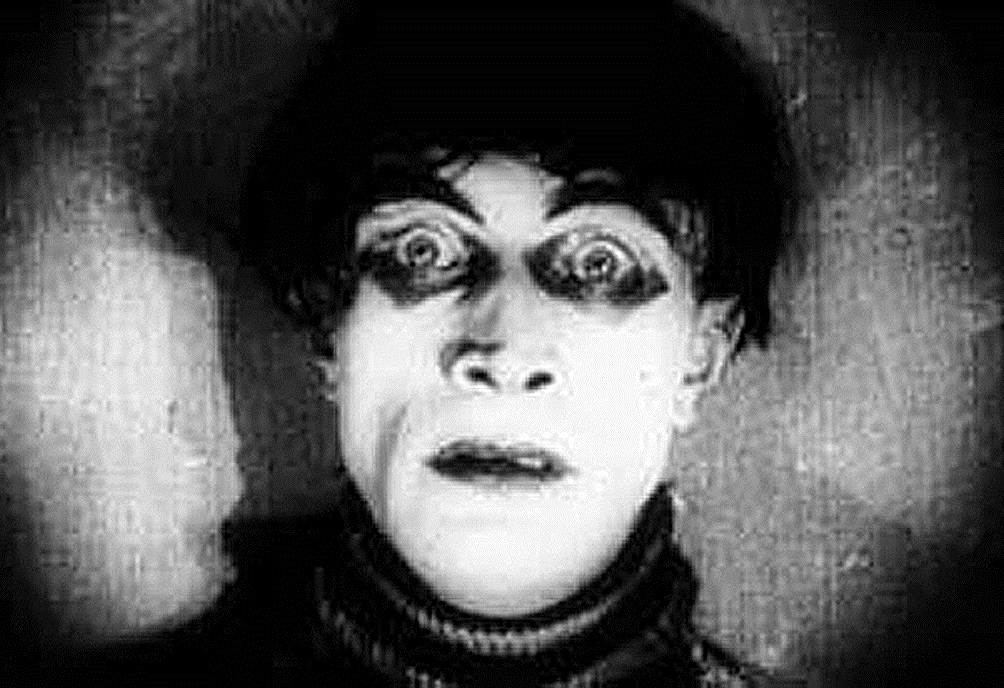 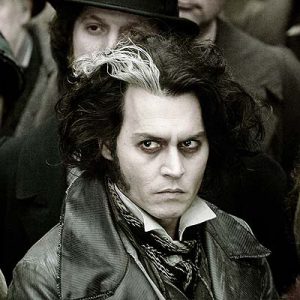 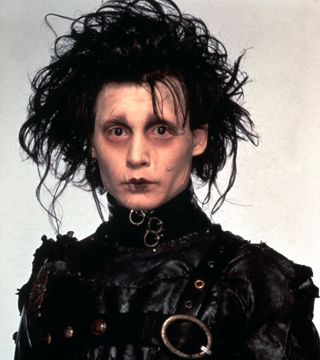 I find it very interesting that Tim Burton also incorporates certain elements of German Expressionism into his animated picture films. One example of such is The Nightmare Before Christmas. The animated picture draws inspiration from The Cabinet of Dr. Caligari. Both have an angular landscape and the characters are standing on a ledge in the distance, their bodies pointed and bent. Also, everything in the scene is in the shadows, while the main character has a background of light. 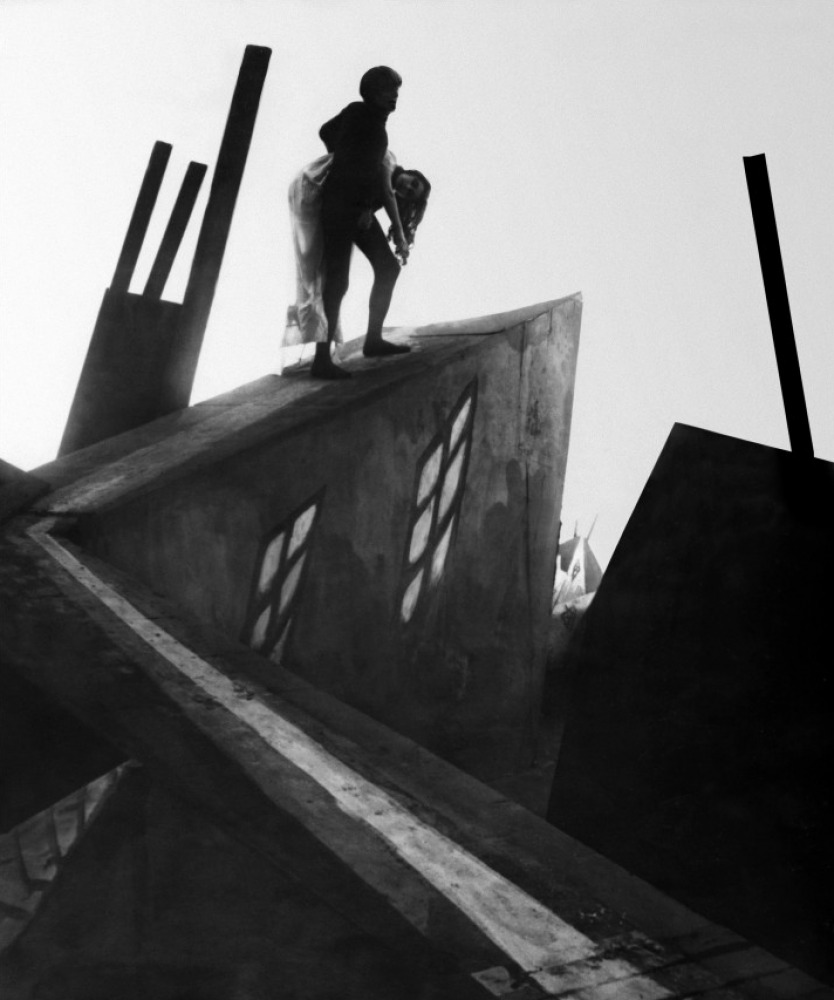 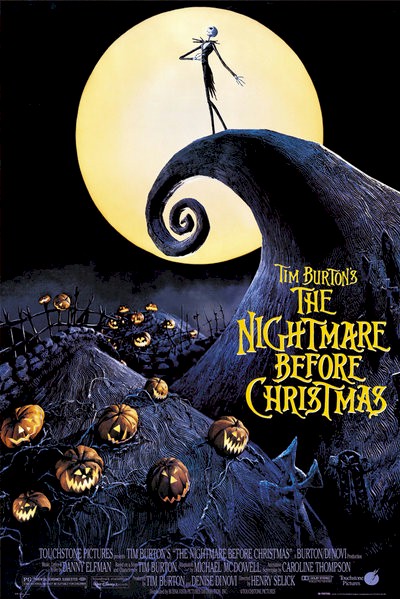 Although not technically “shot” by a real camera, Tim Burton manages to achieve the “chiaroscuro effect” in The Nightmare Before Christmas, with deep shadows and “low-key lighting”. In the animated picture film, the environment is made up of structures without geometric shapes. There are no squares or rectangles in Halloween town; all the houses are spiraled and curved, the windows crooked, the ground tilted up steeply, and the buildings lopsided. There is no order in the buildings or the environment. These same styles were characteristic of German Expressionism to show the chaos and instabilities of the world. 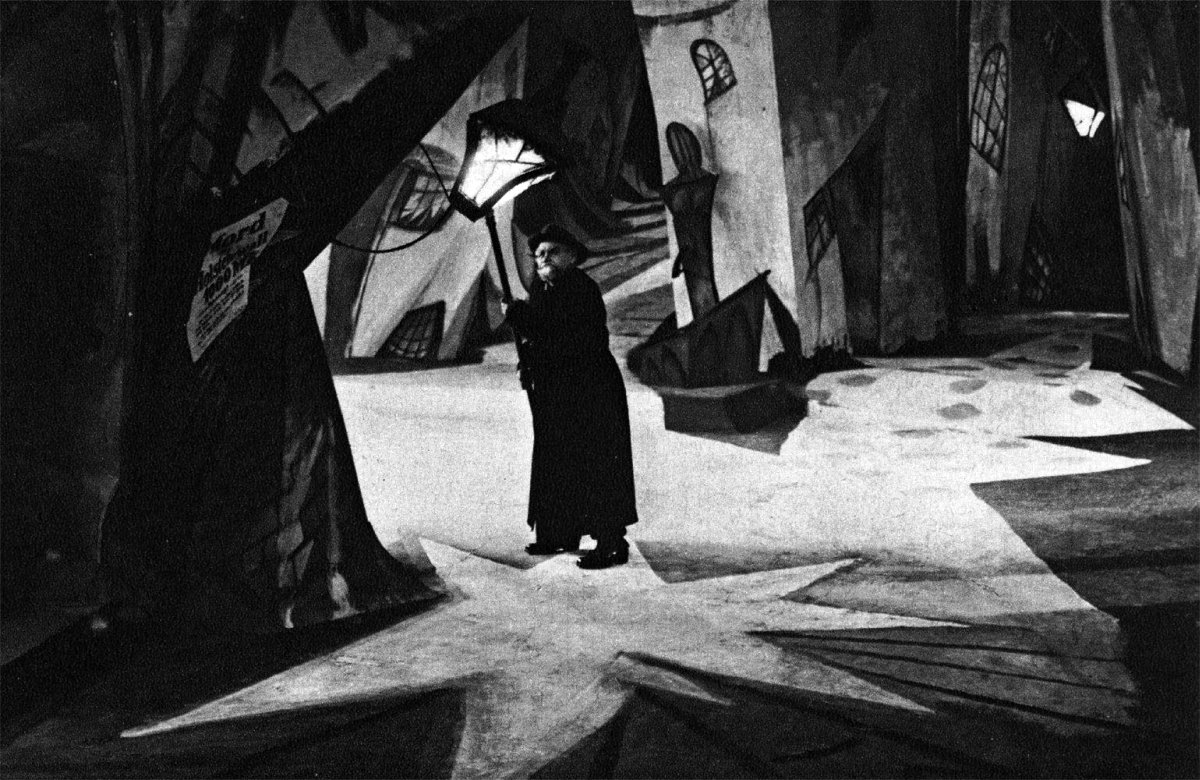 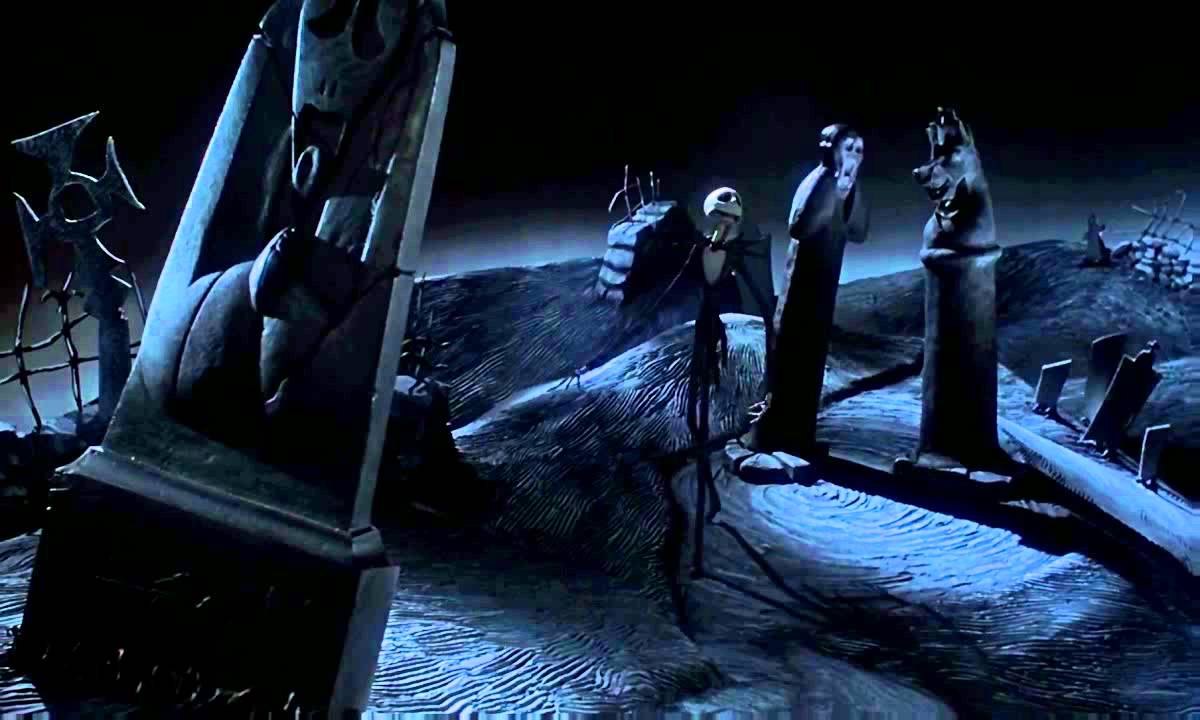 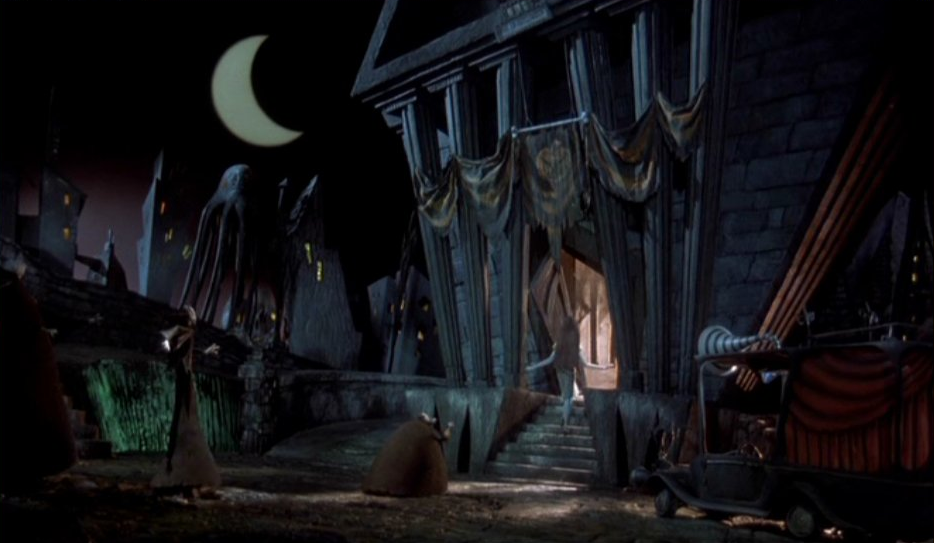