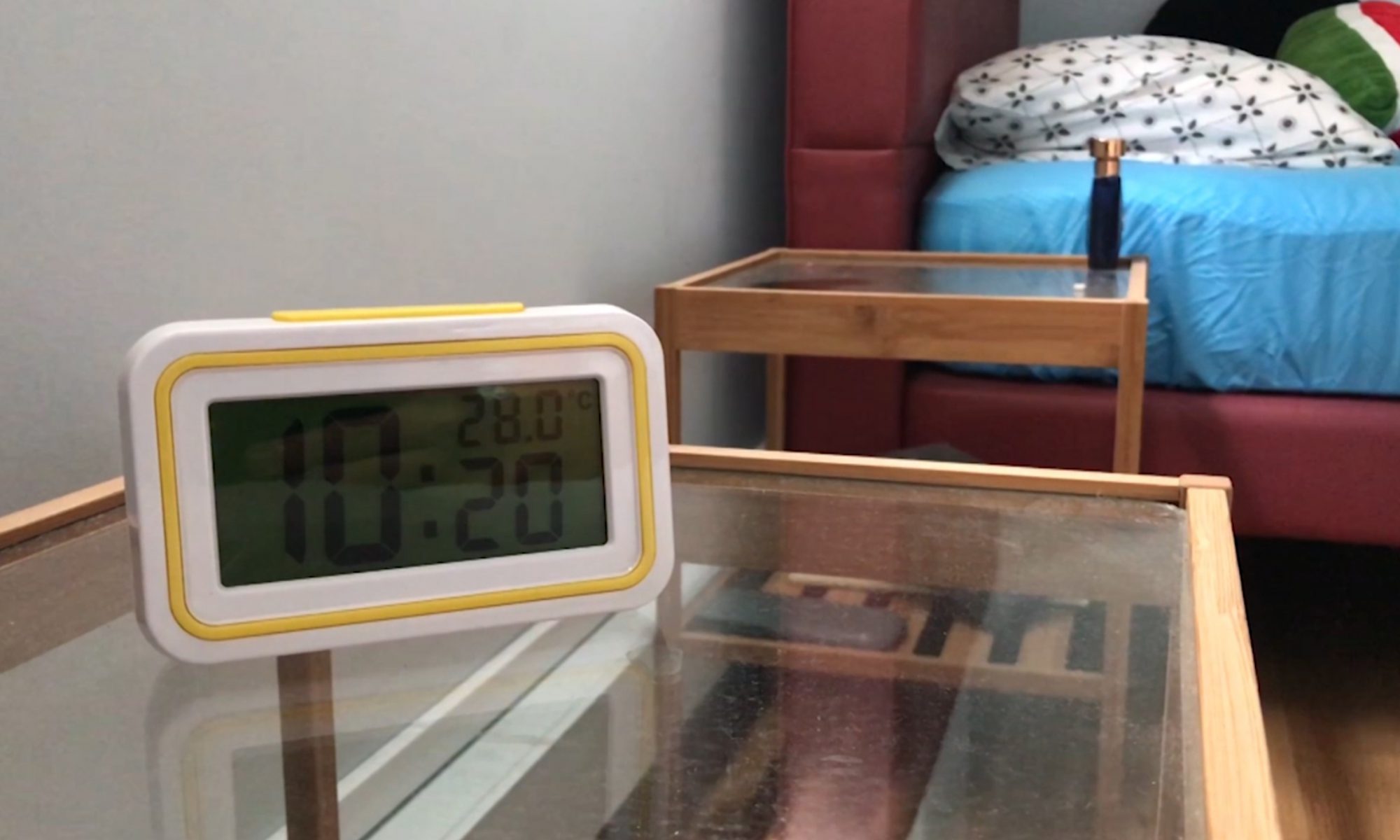 My final video, entitled ‘My Day in 60 seconds‘, is a project which shows 60 segments of 1-second scenes of what I do on a particular day.

Project Title: My day in 60 seconds

The project is a 60-second video sequence which showcases different activities happening throughout the day, from when I wake up to when I go to sleep. There will be a sound track of a ticking clock, each activity will only be shown for one second (the duration between each tick of the clock). Each tick will occur on an on-beat, the off-beat will include a single beat of sound of the particular activity happening, e.g. flicking of a switch, slamming a door close, pressing a lift button etc.

I was inspired by time lapse videos and other ‘my day in 60 seconds’ videos found online.

This project is a new concept and not a continuation of a previous project.

I intend to express measured along with edited time to the audience. Also, how sound can enhance the rhythm of the video.

One innovative aspect I would say is that I will approach it in a slightly different manner as described, having each scene only last one second, and according to the beat of the clock ticking. Unlike other similar videos that have each scene last a few seconds along with a music track, I want the audience to focus more on the beat of the soundtrack and the rhythmic vibe it creates.

Objectives and Activities of Project

I will be creating an estimated 60-second video.

It is a videography project utilizing an iPhone camera.

The project would require the use of a camera to capture each individual 1-second shots, in this case an iPhone camera, as well as Adobe Premiere Pro to produce the final video.

The final video will be displayed on a laptop.

Here is an example of something similar I will be doing,

However, one difference is that I plan to have mine more quickly paced (at 1-second intervals), with the underlying sound of a ticking clock. The reason why I decided on having my scenes as 1-second shots is because I wanted to incorporate sound and rhythm into my final video, instead of having a slow-paced video, I wanted a more fast-paced rhythmic video to express both measured and edited time.

Below is the initial list of scenes I planned out before I started filming. Along the way, there were a few changes and I had to add/ remove scenes.

After that, I simply filmed each scene, taking note of a few aspects such as what I was wearing and most importantly, the time of the day.

The scenes will be filmed from my POV and hence it does not allow for any shots taken from a tripod etc.

I had to download some sounds online which I could not record, example, the honking of the car when I was crossing the road, I didn’t really want to purposely have a car honk at me, I would have to piss the driver off if that was the case. Also, the pooping sound was taken online, it was surprisingly hard to get a good sound of poop splashing into the toiled bowl.

For the first consultation, I had to show Wen Lei a short concept of my video, to show the transition of the scenes and how the sounds appear.

One problem with an initial version was that there were some scenes with a slight pause at the start, which made it look awkward as I was waiting to execute the action, rather than film it ‘naturally’.

Secondly, I had to insert a couple more scenes between ‘ending class’ and ‘going home’ as it seemed too similar to ‘leaving home’ and ‘entering classroom’.

One challenge was coming up with 60 scenes which produced a single or double beat which will fit with the rhythmic beat of a ticking clock. Once the filming was completed, stitching them together was relatively easy.

This project has taught me how to work with both aspects of time and sound, even though this project was time-based. The rhythm is important as it sets a pace for the audience for them to follow, in other words, creating causality via sound, that being said, if this rhythm is broken, the audience may get disoriented and lost.