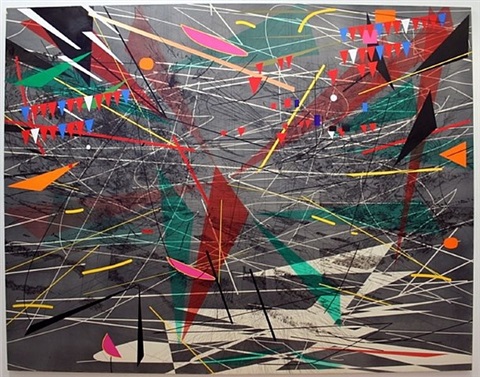 A brief introduction on various artists and a personal take on how their works can influence my project.

Ed Moses’s works are abstract and non-objective. Moses tries to break away from the containment of the canvas, here are more layers and chaos in his works. In the 1970s, he introduced the diagonal grid into his works, in the late 1980s, these diagonal grids became more of loose squiggles.

His earlier works appear more rigid, consisting of individual blocks that seem to be violently drawn, giving it texture and character.

Lewitt works are of conceptual art and minimalism, he is regarded to be these movements’ founder. In 2005 LeWitt began a series of ‘scribble’ wall drawings, so termed because they required the draftsmen to fill in areas of the wall by scribbling with graphite.

Lewitt uses the same repetitive element, scribbles, but with varying densities to create his work. This can be applied to my project, using the same mark making tools but applied with different densities.

Cai initially began working with gunpowder drawings and ephemeral sculptures to foster spontaneity and confront the suppressive, controlled artistic tradition and social climate in China. His gunpowder drawings convey his central idea of using natural energy forces to create works that connect both the artist and the viewer with a primordial state of chaos, contained in the moment of explosion. They also demonstrate his central interest in the relationship of matter and energy.

Cai Guo Qiang’s approach in his method of creating art is quite unorthodox, his art may not turn out the way he would expect it to be, as he has to ignite his work before the final results emerge from the explosion. If I were to use a similar method for my project, it would generate a sense of uncontrolled randomness in my mark making.

Hilma af Klint  was a Swedish artist and mystic whose paintings were amongst the first  abstract art. A considerable body of her abstract work predates the first purely abstract compositions by Kandinsky. Through her work with the group The Five, a group of female artists, Hilma af Klint created experimental automatic drawing as early as 1896, leading her towards an inventive geometric visual language capable of conceptualising invisible forces both of the inner and outer worlds.

Hilma’s art seem to consist of multiple elements interacting with each other, each with their own unique personality, be it shape, colour, or size. This creates a canvas of varying shapes and forms which can be interesting for my project.

For Emma Kunz, each colour and each shape had a precise meaning in her understanding of the world, she regarded her pictures as holograms, spaces you could walk into, images to be unfolded or collapsed back down again, usually multilayered in their construction.

Emma’s works are precise, symmetrical, more controlled and non-spontaneous. A similar method can be applied to my project if I am looking for such characteristics in my work.

Agnes Martin’s early works included biomorphic paintings in subdued colors. Her signature style was defined by an emphasis upon line, grids, and fields of extremely subtle color. Particularly in her breakthrough years of the early 1960s, she created 6 × 6 foot square canvases that were covered in dense, minute and softly delineated graphite grids.

Agnes was a minimalist and abstract artist, her works focused mostly on the texture. Textures are an interesting way for mark making as they can create details which may be too complex to be done by hand.

Warhol’s Rorschach series is one of the few in which the artist does not rely on preexisting images. Inspired by the Rorschach tests done on patients, Warhol would paint on one side and would imprint it on the other side.

Warhol’s Shadows , grounded by a high-contrast, abstract field limited to 17 specific colors ranging from Day-Glo green, yellow, turquoise, scarlet purple and crimson to hot pink, cobalt blue, silver, a somber brown and black. It is unknown what the shadows are actually of.

The “Oxidation Paintings” is a series of “paintings” done by coating canvases with wet copper paint and afterwards urinating on them, urine which oxidizes and changes color.

Three works which are all very abstract, shows that art can be created by an unlimited number of ways. Something to think about when doing my project, but don’t worry, I won’t pee on my work.

Julie Mehretu is an artist best known for her densely layered abstract paintings and prints. She is also known for her large-scale paintings that take the abstract energy, topography, and sensibility of global urban landscapes as a source of inspiration.

A wide use of colours, shapes, and lines. Very spontaneous and random which can be used to create some interesting marks and patterns.

Brush strokes can create some unique textures which can be applied to my mark making.

Kline’s artistic training focused on traditional illustrating and drafting. Over time, he developed an interest in breaking down representative forms into quick, rudimentary brushstrokes.  In his later years, Kline’s brushstrokes became completely non-representative, fluid, and dynamic. It was also at this time that Kline began only painting in black and white. He explains how his monochrome palette is meant to depict negative and positive space by saying, “I paint the white as well as the black, and the white is just as important.”

Again, brushstrokes can be interesting as they create textures, which can add details when making marks. I can also play around with negative space.

Yves Klein was the most influential, prominent, and controversial French artist to emerge in the 1950s. He is remembered above all for his use of a single color, the rich shade of ultramarine that he made his own: International Klein Blue.

In the case of People Begin to Fly, Yves used negative space to create the art. I could mask out a shape using an object and paint the area around it to achieve the same ‘negative’ effect.

Mark Bradford’s abstractions unite high art and popular culture as unorthodox tableaux of unequivocal beauty. Working in both paint and collage, Bradford incorporates elements from his daily life into his canvases.

Mark introduces sort of a graffiti style to his art, using exploding lines and blocks of squares, he makes these two completely contrasting elements work together on his canvas.