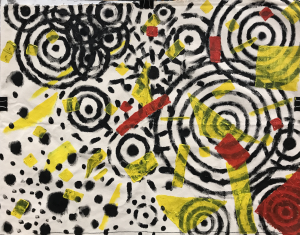 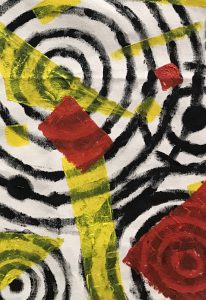 vibrations overlap onto each other. As I listened on, the deep resounding drumbeats began to fade into the background and I heard flatter sounds from the drum rim and they seemed to float to the surface. These sounds were shorter and were sharper in shape. As I painted this work, it turned out exactly as I felt. I began with the constant, concentric circles that represented the drum beats just as I first heard them. It was repetitive and almost meditative drawing it over and over and over. Then, just like I heard, I started to space out the circles and move over to sharper shapes with color to represent the flatter tappings I heard. The colors yellow and red immediately float onto the surface of the work, but the translucency of the paint allows the lines of the circles to still be seen and the entire work still gels together like the sounds I heard.