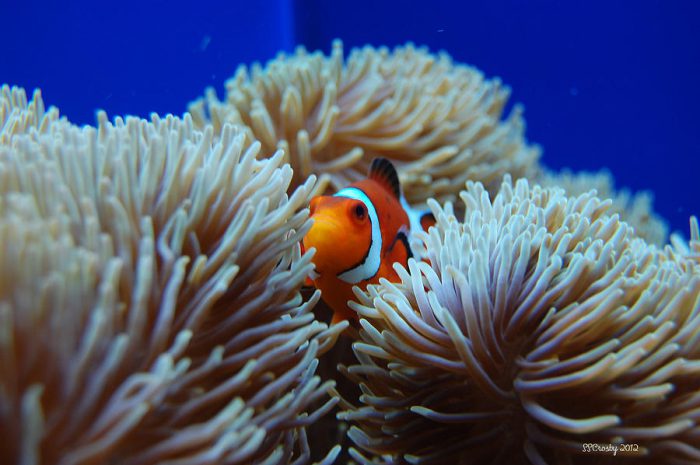 Of the nearly 30 species of clownfish, there are two types commonly referred to as the orange clownfish (Amphiprion percula and Ocellaris). The percula clownfish is distinguished by its vivid orange colour with distinctive white bands outlined in black. 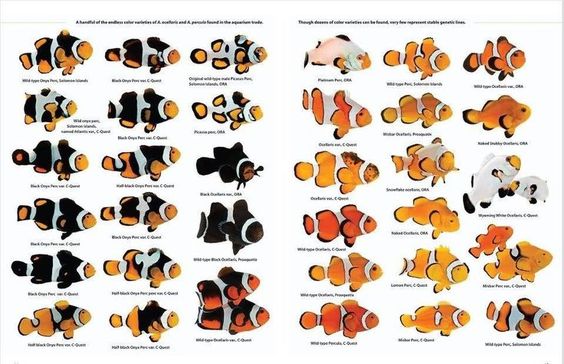 All clownfish are born male. As they mature, they usually pair off with another clownfish, and the dominant individual becomes a female. The female lays eggs, which are defended and aerated by both parents until they hatch.

Did you know?
The clownfish get their name from the bold colour strokers on their body, like a clown’s face paint. The clownfish are also called the clown aNEMOnefish.While Disney’s Nemo may have spoken in English, the fact is that real clownfish communicate in a unique manner. The norm is to produce clacking noise when they sense an intruder in their territory to warn the rest of the group. On average, clownfish generate five clicking sounds in a minute. It is, however, not clear how they produce the noises

Characteristics
Bright orange with three distinctive white bars, clown anemonefish are among the most recognizable of all reef-dwellers. Most individuals also have 11 dorsal fin spines, a characteristic that often is used to distinguish the species from the orange clown anemonefish (Amphiprion percula), which is nearly identical. The common clown fish also has a muddy brown ring around the pupil of the eye, whereas the ring in the pupil of the orange clown anemonefish is clear.They reach about 4.3 inches in length and are named for the multicoloured sea anemone in which they make their homes.

Diet
Clownfish are omnivores, feeding on a varied diet consisting of algae, zooplankton, worms and small crustaceans. At the Aquarium, they will feed on small, cut-up pieces of shrimp and smelt, as well as krill.

Population Range
There are at least 30 known species of clownfish, most of which live in the shallow waters of the Indian Ocean, the Red Sea, and the western Pacific. They are not found in the Caribbean, Mediterranean, or Atlantic Ocean. 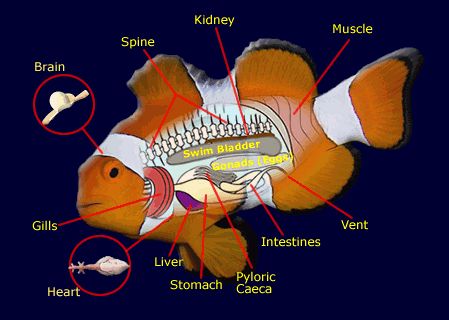 Clownfish swim toward the sea anemone and slightly touching them by wiggling up and down.

The basic unit of common clownfish society is a group made up of a female (the largest member), the breeding male (the second largest member), and several nonbreeding neuter individuals with undeveloped sex organs. Should the female die, the largest remaining member of the group will become female, and the second largest individual will serve as the next breeding male after its male sex organs fully develop.

Breeding, which takes place throughout the year, begins when a female lays between 100 and 1,000 eggs. To deposit the eggs, the female drags her ovipositor over the substrate of a nest made clean earlier by the breeding male; filaments on the eggs facilitate their attachment to the substrate. The nest may occur within a sea anemone or on a nearby rock protected by a sea anemone’s overhanging tentacles. After the breeding male fertilizes the eggs, both parents guard them until they hatch some 8–12 days later. Parental care ceases at this time, and the young float away on ocean currents. At sea, many of the young are eaten by various predators. However, after approximately two weeks, surviving young begin to explore nearby coral reefs for an appropriate sea anemone host.

Clownfish can find their way back to their reef using their sense of smell. Upon hatching, baby clownfish spend about 10-12 days floating freely in the ocean, as pelagic larvae.  After that time, they often return to the reefs close to shore, where they were born.  The mechanism through which the fish find their way back home after drifting at sea among the plankton. The acidic ocean will cause baby clownfish to lost their way when they are swimming back to their home.

Clownfish communicate by making popping and clicking noises, according to a study on the journal PLOS One. Researchers say the chatter helps maintain the rank and file among group members. “Sound could be an interesting strategy for preventing conflict between group members,” lead study author Orphal Colleye, a postdoctoral fellow at the University of Liège, Belgium, told LiveScience in a 2012 article.

The ability to hear is crucial as it makes the clownfish able to detect and avoid predator-rich coral reefs during the daytime (coral reefs are home to many species that can feed on small clownfish). They do this by monitoring the sounds of animals on the reef, most of which are predators to something just a centimetre in length.

Clownfish can’t survive without a host anemone, whose stinging tentacles protect them. Of the roughly 1000 anemone species, only 10 host clownfish. Clownfish perform an elaborate dance with an anemone before taking up residence, gently touching its tentacles with different parts of their bodies until they are acclimated to their host. The clownfish brings food to the anemone in exchange for protection. By building up a protective mucous coating, the clownfish is immune to the stinging cells of the anemone. The clownfish makes its home within the anemone’s tentacles, enjoying protection from predators; in return, the anemone gets to eat the leftovers from the clownfish’s meals and the clownfish helps keep the anemone clean.