The cat is a small carnivorous mammal. It is the only domesticated species in the family Felidae and often referred to as the domestic cat to distinguish it from wild members of the family. The cat is either a house cat, kept as a pet, or a feral cat, freely ranging and avoiding human contact.

Limps: The cat joints are a modified ball-and socket joint. It is capable of flexion, extension, abduction, adduction, internal rotation, external rotation, and circumduction. Its primary motion, however, is flexion and extension. 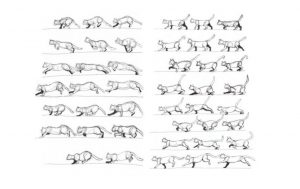 Cats use different strategies to hunt their prey like sneaking or pouncing.

Stalk-and-pounce method: Once the prey is located, the cat quickly moves closer in a low to the ground pose, and then stops and freezes sometimes for endless moments while watching the prey. If the target moves farther away, the cat adjusts by ever-so-slowly creeping forward one paw-step at a time, even freezing with a foot in mid-air to avoid revealing herself. For the final rush, she gathers rear legs beneath her and treads in preparation for for a forward thrusting take-off. It may require several darting leaps before she’s near enough for the final pounce.

Cat righting reflex: is a cat’s innate ability to orient itself as it falls in order to land on its feet. 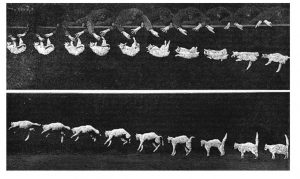 After determining down from up visually or with their vestibular apparatus (in the inner ear), cats manage to twist themselves to face downward without ever changing their net angular momentum. They are able to accomplish this with these key steps:

Depending on the cat’s flexibility and initial angular momentum, if any, the cat may need to perform steps two and three repeatedly in order to complete a full 180° rotation.

Materials we are looking to use:

Fur: resembles the fur of the cat

Reflective: reminds us of the eyes of the cats at night 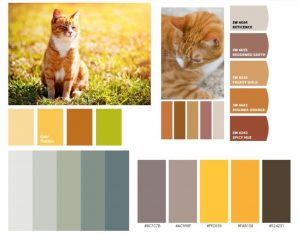