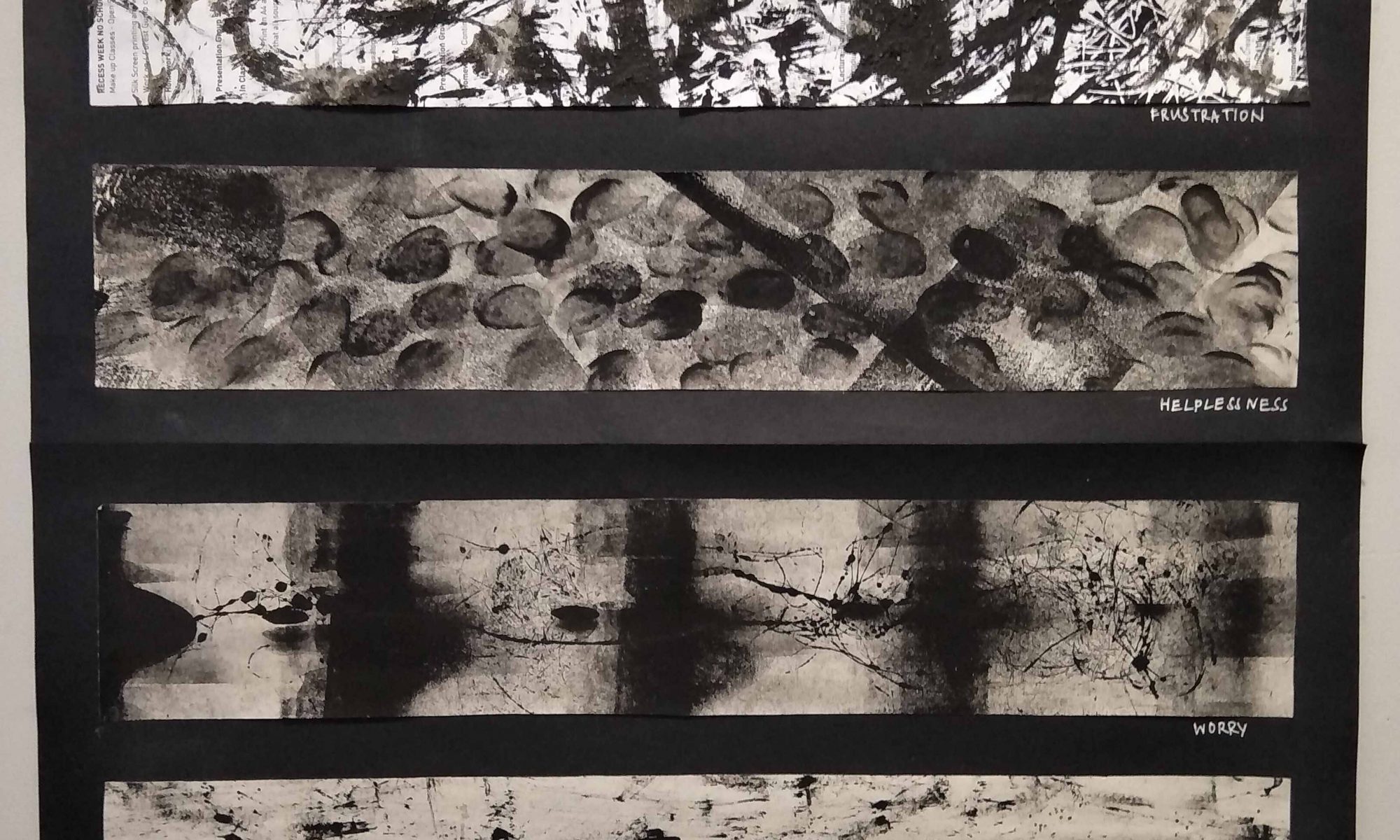 To read more about the research i did prior to this project, click here https://oss.adm.ntu.edu.sg/jfoo018/my-line-is-emo-research/

Upon receiving the project brief, I did not have a clear theme that I wanted to work towards to, hence I started by doing all kinds of experimentation, starting with simply using one tool to make different prints and patterns. I also went to look around to check for things I have at home and things that can be found in school to do more experimentation with the different textures. 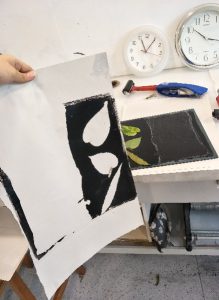 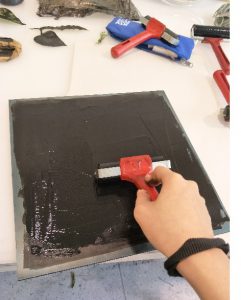 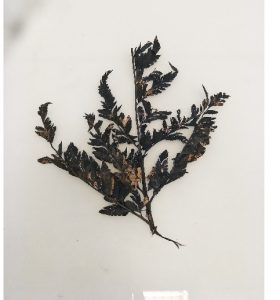 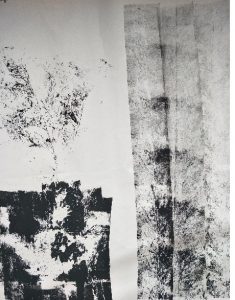 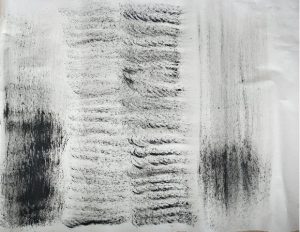 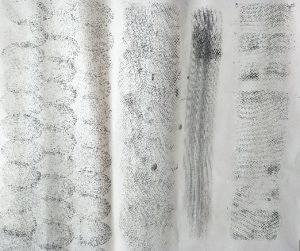 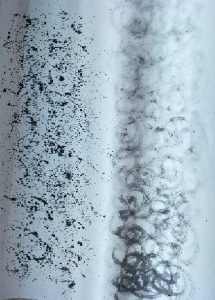 While I was working on this project, a thought hit me to try and represent the emotions I felt while adapting myself to the university’s workload. From there, I decided that it was a great opportunity to express how I felt during the transition from a junior college to an university. The emotions I felt being in a brand new environment, coping with the increased workload and living away from home alone.

Eventually, I decided on the six emotions namely amazement, frustration, helplessness, worry, longing and excitement. I deliberately listed them in such a way in order to give a flow to my theme which I will explain later on for each of the work.

For my first emotion-amazement, what I wanted to represent was how i felt upon knowing that I was successfully admitted into a local university and that I would be able to explore the huge campus far away from home.

Initially I was just curious about what kind of pattern would sugar particles print on the newsprint paper, however unexpectedly the design turned out to be really interesting, similar to splashes of paint or like clusters of small flowers. This feeling reminded me of how I felt back then hence I decided to use this technique for this piece of work. The sugar can also be seen as a new sweet beginning for the next phase of my life.

What i wanted to portray was the feeling of being in a new environment where everything is going to be very new and fresh to me. The specks of empty spaces made indicates that I am constantly experiencing new things and having new discoveries. I chose a part of the strip that has all the specks slowly increasing from the left to right, to show consistency. It also shows how my amazement towards learning will grow as I learn more and more in university.

For the second emotion, I chose to express frustration-frustration from all the assignments that was given to me despite the fact that it was only two weeks into school, into a strip of paper. The large amount of work given within the short period of time gave me a lot of anxiety and I decided to pour my emotions out for the next piece of work.

The frustration piece was created using the 2D class weekly schedule as the base to work on. I also included clay powder from the dried clay pieces from 3D class by mixing it with the ink and spreading it around using the back of a paintbrush. I also added some prints of wavy messy lines in the background to add dimension to the whole frustrated emotion to enhance the feeling of the piece as you look at it.

As I was finishing the piece, it also frustrated me as I was using the back of the paintbrush to create messy lines. This adds to the emotion I wanted to express on top of the stress I was getting from all the assignment deadlines.

The third emotion that i wanted to express after frustration is helplessness. The struggle of having to deal with problems independently most of the time was what i wanted to express, since most assignments are graded individually. One of the main differences I felt between junior college and university was that university focuses a lot about being independent, therefore loneliness is definitely something I feel really strongly towards especially in this phase of just starting out.

For this piece, I made use of the ink rollers in the studio, rolling in different directions to signify that I feel lost, then added on my own thumbprints all over the work to make a mark that as much as I feel helpless, I have to learn to be independent sooner or later.

From the large piece of newsprint I was working on, I chose the portion where the lines from the rollers were more defined as I wanted the idea of lost in different directions to be clearer in my work. 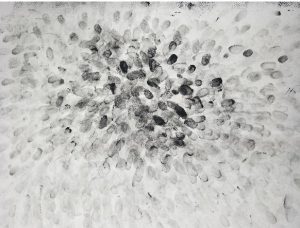 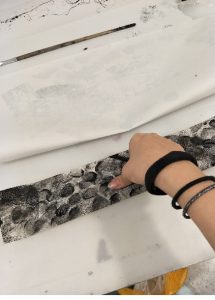 Following helplessness, the next emotion i chose is worry. As much as i feel like I am coping with the workload, I do sometimes worry about the next few years in university. Will I be constantly worrying about submission deadlines? Will I be able to produce quality works? Will I still be able to cope by then?

For this work, I once again made use of the ink rollers to produce an effect that looks like its fading out gradually to signify that I am uncertain about the future ahead of me, that it is no longer a clear goal for me. On top of the print, I added prints of my own hair strands, to emphasize that I am feeling so stressful that more and more of my hair strands are falling off.

The strip shows opposite direction of the fading out effect with the amount of hair strands to show that as I get more and more uncertain about my future, my worries increases as shown by the increasing hair strands. 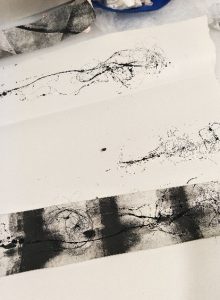 Next up, I chose to do the emotion longing to express the homesickness i feel staying in the university hall. I personally stay in the east so moving to the hall in the west felt just like moving to another part of the world. Although I do get to see my parents through video call every night before I sleep, it is somehow inevitable to feel empty and slightly homesick where i miss my parents company and the feeling of being at home.

Hence in order to create this work, I borrowed a spatula from my mother and created this paste by mixing sugar and ink together. The paste then became my cooking ‘ingredient’ then I added it to the paper, and came in with the spatula in a frying motion to mimic the action my mother does as she cook. On top of that, I added patches of black pepper to enhance the feel of home cooked food, to bring out the emotion of longing to go home. 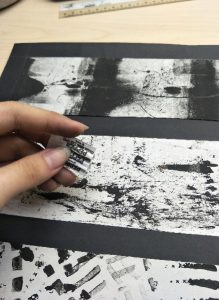 For the last emotion, I chose excitement which represents how i feel on the last day of the week where I can go home instead of staying in hall every weekend. Every week I just look forward to going home and spending time with my family and I wanted to express it in the string of events to show a flow.

The work is fairly simple, newsprint paper with a lot of foot prints, to signify the excitement of me almost running home in delight. Although simple, I thought it was a straightforward way to bring out the simple joy in my life during this period.

I chose a particular portion for the strip which showed footprints filling up the strip but yet clear enough to define each footprint, as I did not want the paper to be loaded with footprints that it becomes a mess of black ink. While i wanted to portray the tense excitement in the close footprints, I wanted to keep it neat and simple to not alter the emotion I feel as I look at the strip. 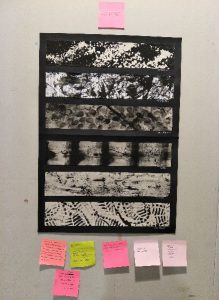 Some of the challenges I felt during the process of crafting the strips was that I had the idea of what emotion I wanted to portray but I had difficulty identifying what tools I could use that was related to the emotion to put into the strips because ultimately emotions are intangible, it differs to everyone in terms of how they will feel because the interpretations might be different unless explained. Another challenge was that I did overlaying of different textures hence I had to make sure the details could be seen instead of making it a blur mess of black ink.

I think that however there could be improvements to be made especially for the amazement piece to include something relevant during the transition from a junior college to university, so that the piece would be more interesting in terms of laying of different textures and patterns. 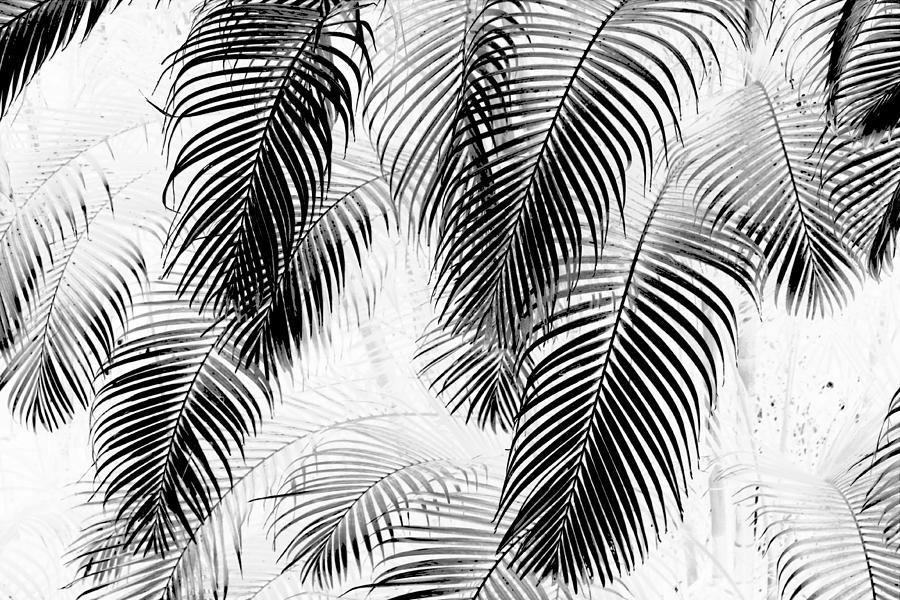 Don’t be emo, hopefully this can make u more palm-ed up ha ha.