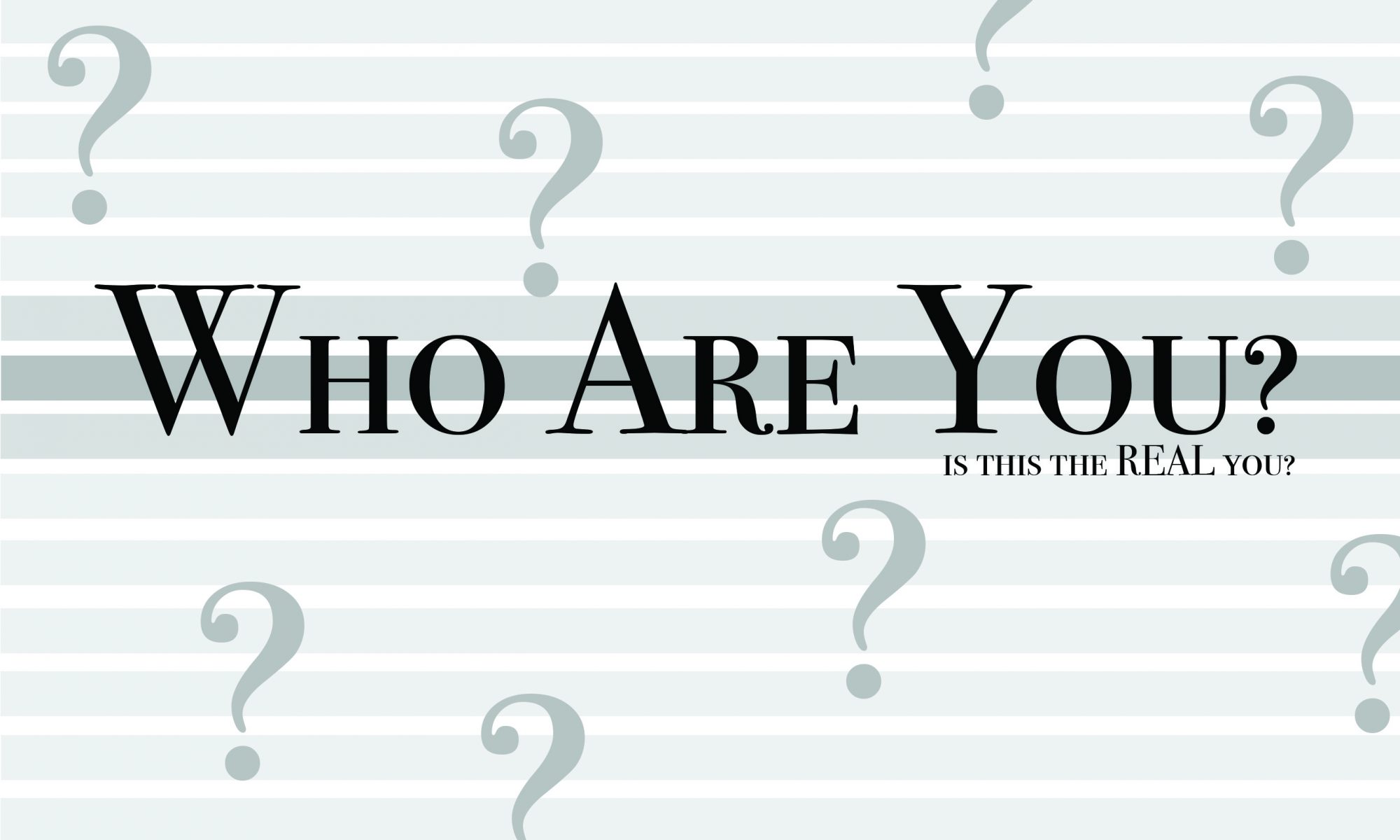 I feel like there is just so much to say regarding our digital identity because it is something so relevant to us right now in this time and age. We all hide behind social media platforms with an identity that we put forth on the web for everyone all around the world to see.

How do we truly know someone if all we might know of them is only a part of them that they choose to show? What is worse is that the part that they show might not even be close to who they are because that is just how free we are on online platforms, we have the power to decide whatever we show!

In Carla Gannis’s work ‘Until the End of the World’, she questions about the hybrid nature of identity, of how our identity online and offline intersect in this time and age. The creation of the video was inspired by a film by Wim Wenders where a woman is addicted to watching her dreams in a small handheld device, hence Carla Gannis converts it to be more applicable to the current age to discuss about the digital identity politic issues. In the video, imagery of the mobile phones can be seen and there is some sort of narration that goes on in the background to narrate the changes as time passes from year 4545 to 5555 to 6565 and so on.

There was this particular scene which I felt was quite thought-provoking to me. The phones are buried on the ground and it resembled tombs on a cemetery and I wondered if this was meant to convey the message that we are all trying to portray a certain side of us online that we bring it to our ‘deathbeds’ because that is how we want people to remember us as. Then again, this is just something that came across my mind haha! 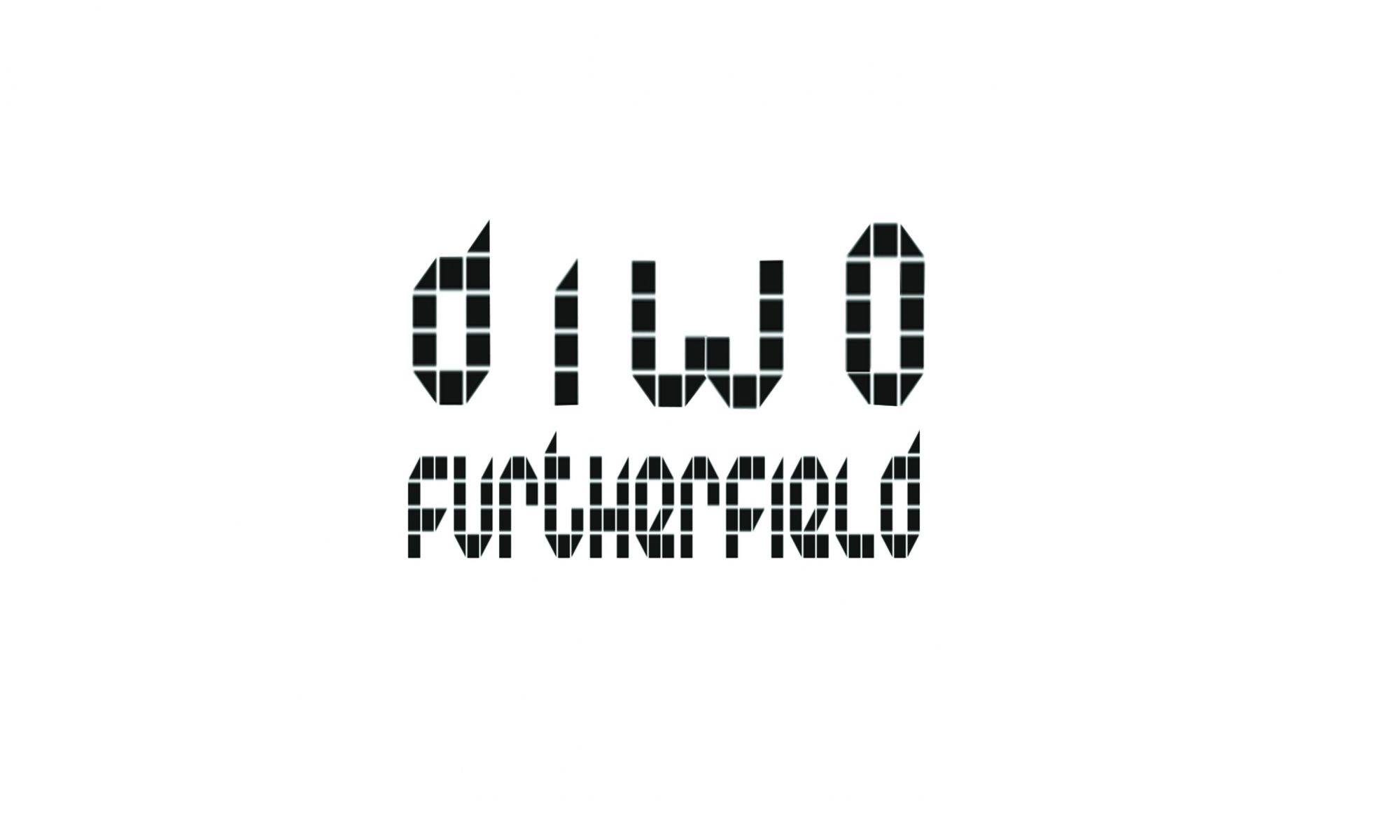 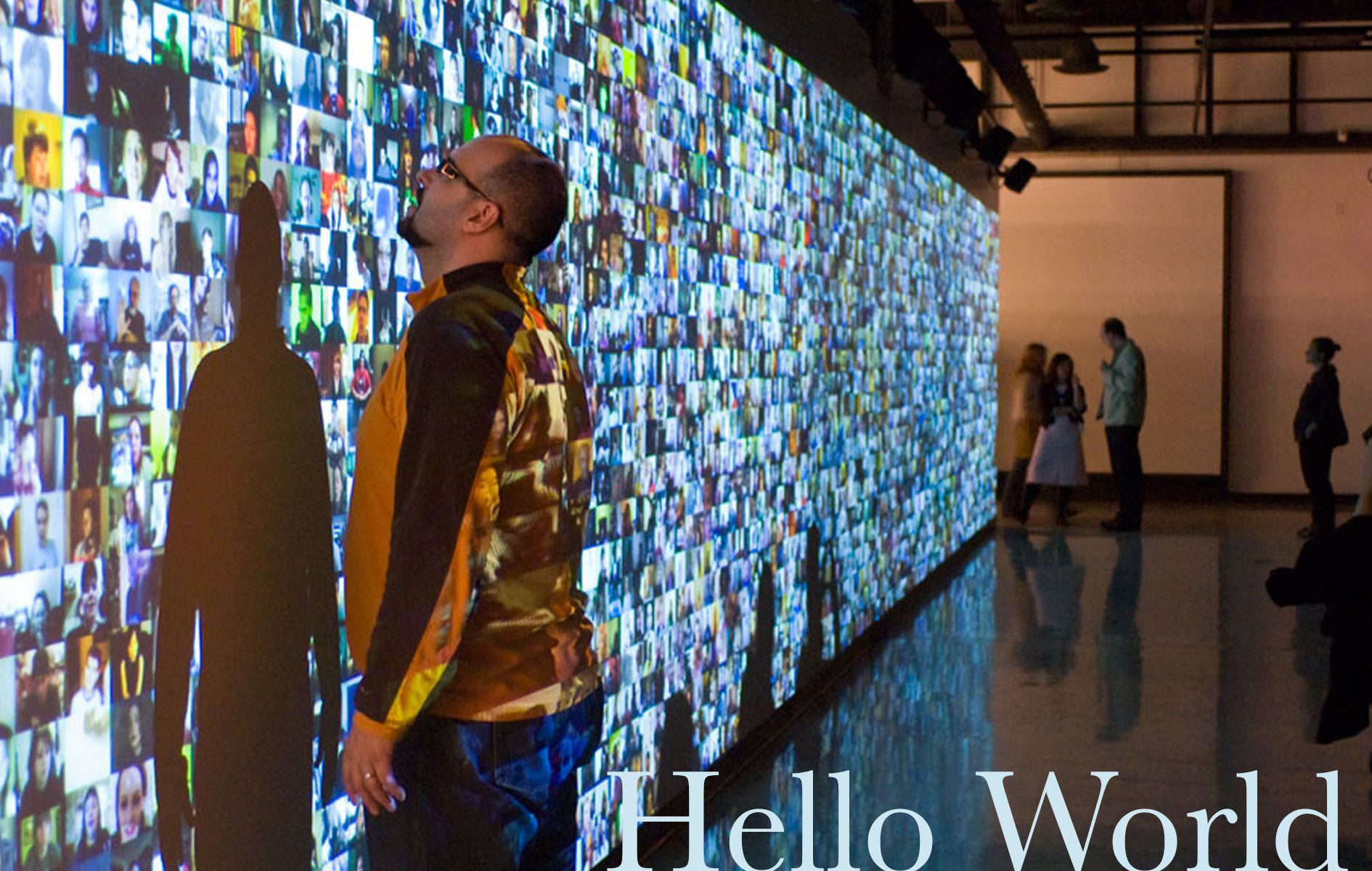 Hello World! is a work by artist Christopher Baker where he compiles over 5000 videos of different individuals speaking to an imagined audience from their private spaces onto a single screen as an installation to talk about participative media and the human desire to be heard. He is inspired by the interconnectivity present in our world today, where we might be alone in our own spaces but yet we can be together on this online platform. The viewers can either listen in to each speaker or just be immersed in the cacophony.

The artist wants to discuss about how technology created the existence of social media platforms which functions as a medium for people to share their views with the world, while expressing concerns as to if this ‘third space’ is really providing a suitable platform for them to actually be heard. He wants to focus on the concept of a third space and how it gives people the idea of their presence being noticed. The individuals in the videos continue sharing their opinions with the idea that there are people paying attention to them. However, this makes the third space of the social networking platform seem very one-sided in a sense that although individuals are given the opportunity to share their opinions, their opinions are not essentially heard by everyone else. This brings to a discussion as to if these platforms are social if they do not effectively provide a response to all the opinions voiced out. 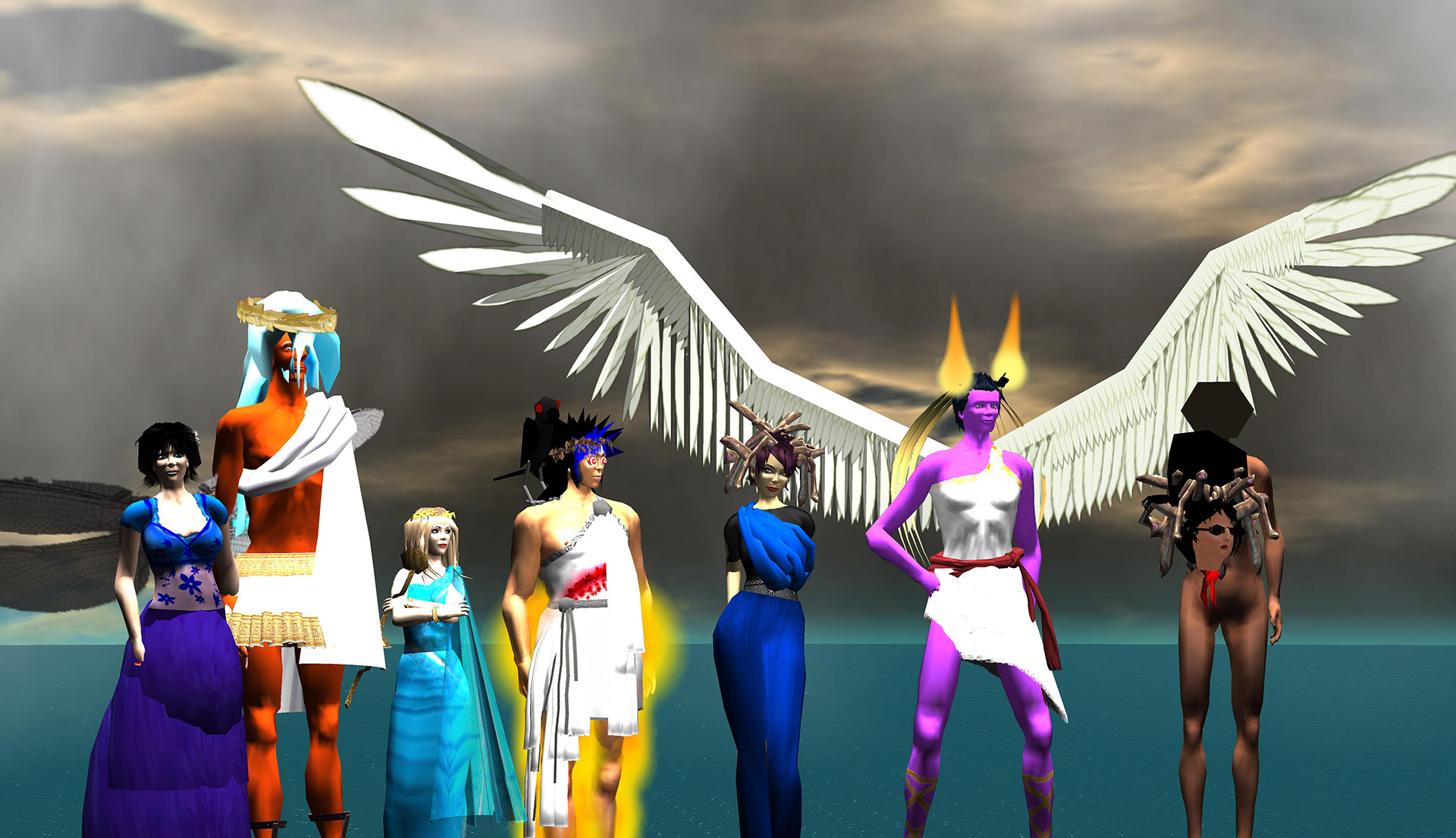 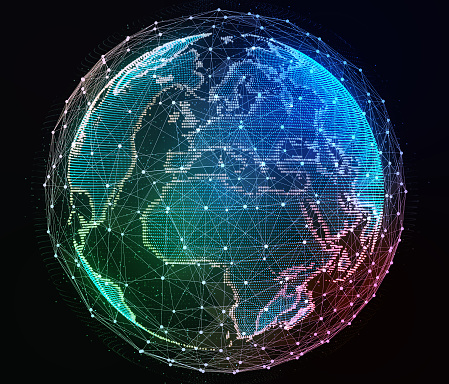 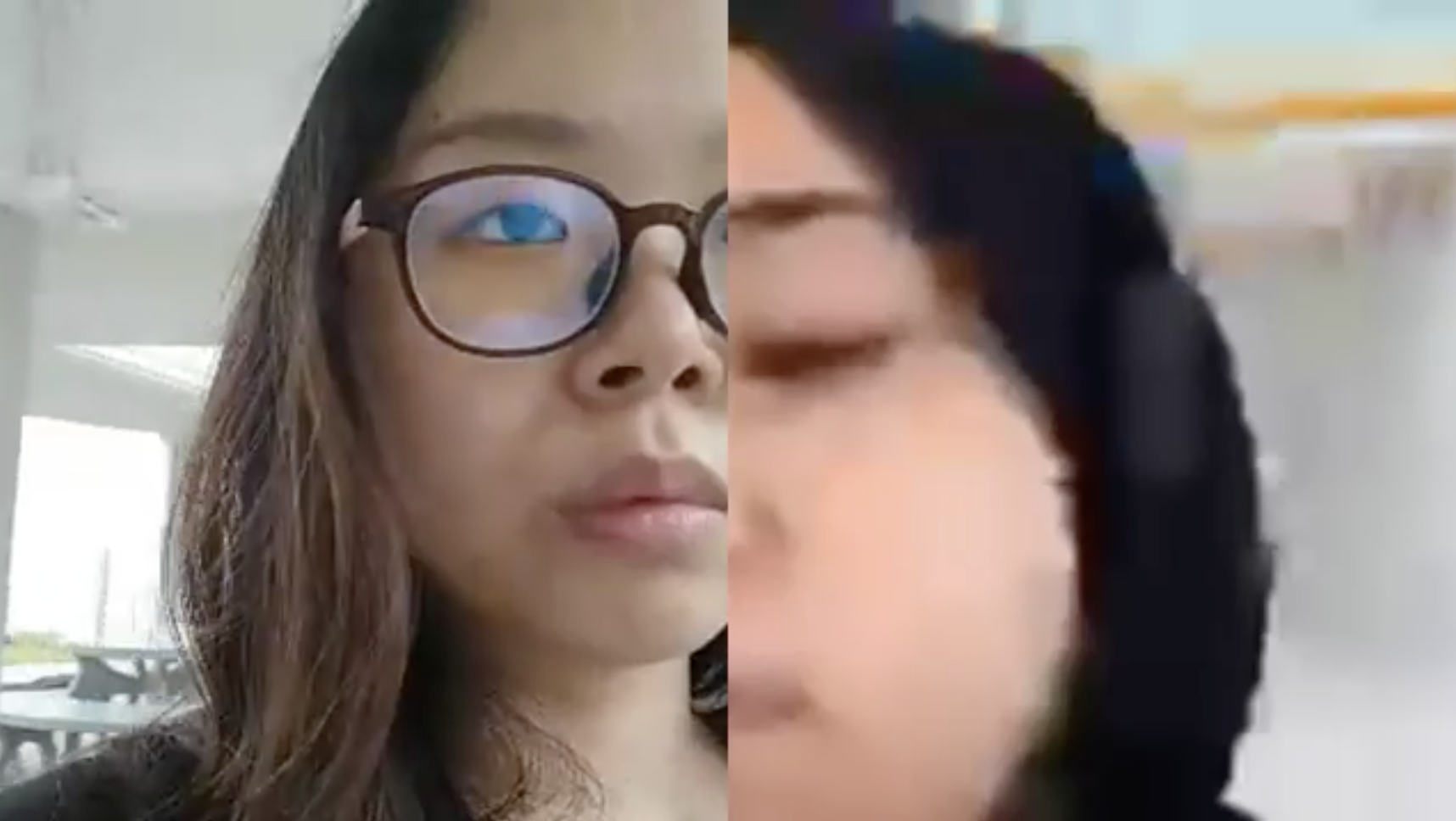 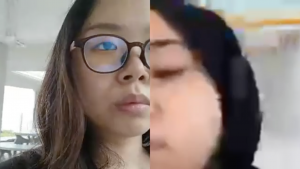 For our Tele-Stroll, Me and Nadiah thought that we could film our livestream at two different locations that is very relevant to us in our daily lives now, in hall for me and at home for her respectively. We thought that we could use this to show the differences in our lifestyles since I stay in hall while she does not. We also thought maybe we could use this to compare how one may constantly reminisce their childhood even as we age.

In our video, we discussed to synchronise our moves, however replacing it with different objects to suit the context. I would be representing the outer appearance of a person, the more matured side who has to deal with work and is constantly stressed out. On the other hand (or other side of the screen), Nadiah represents the inner child in us, of how we secretly still have that immature side of us that we miss as we grow older and carry more and more responsibilities. We tried to synchronise from the start, closing of a laptop on my side of the screen as she closes a children’s book. We then continued the half body method to carry out other actions such as packing our things, wearing our shoes and walking out. We also tried to synchronise our eye direction when the camera pans to our face, however we later discovered that it would be quite hard to do especially since the cameras might face some technical issues and lag behind. We tried to do the synchronisation by communicating beforehand about actions we will do to prompt a change since it was relatively hard to calculate the exact timing of our different locations.

Although there were some technical issues here and there which made the synchronisation kind of off, I appreciate and was able to see the beauty in this realm of a third space where me and my partner were able to connect spiritually without actually talking if we actually communicated beforehand. It amazes me how two or more people can actually be literally at extreme corners of the world and yet still be able to connect via their phone due to the introduction of technology. Isn’t it amazing?