A Hole in Space (1980) by Kit Galloway and Sherrie Rabinowitz consists of two large projection screens, one at the Century City in Los Angeles and the other at the Lincoln Center in New York City, both screening real-time footage of people from the other city. As such technology was rather advanced at the time, most people were foreign to the idea of real-time video communication. Without any signage or description, this work came as a surprise to the public. It was interesting how the public responded to the work over the three days – first with confusion, then with amazement, and finally immersing fully in the communication experience. 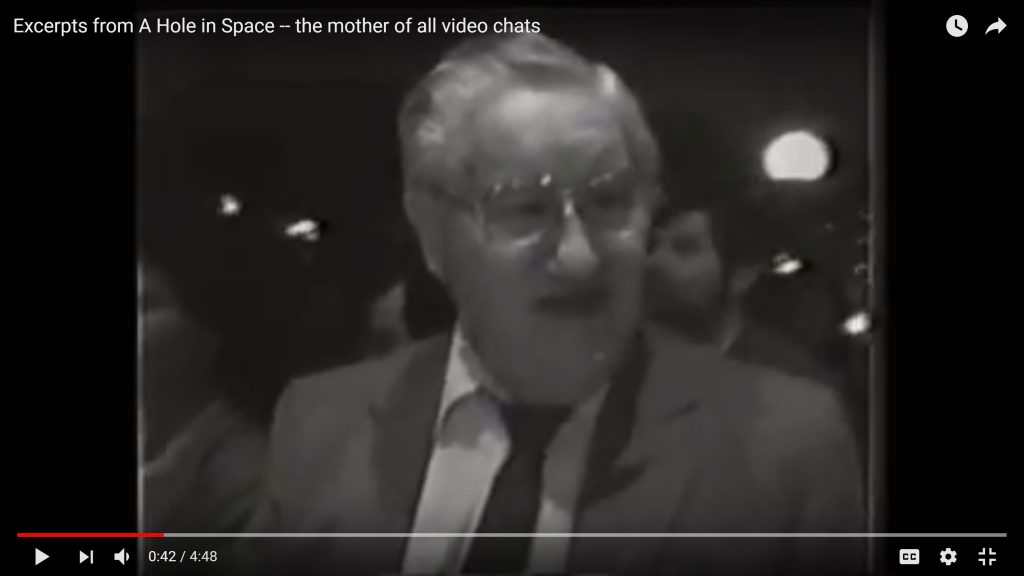 Communication between the two sides of the screen erupted as soon as they realized the truth. The gradual realization and build-up of excitement from everyone formed a collective narrative for this piece. In this case, the participant is also the artist. Every unfiltered human interaction (cheering with beer bottles, flirting, ecstatic family greetings) and personalities contributed to the art work’s narrative. The traditional distinction between the artist and his/her viewer is now blurred, as neither party has full control over the outcome of this work. It is unique and unpredictable, similar to the collective body of photographs we did last week.

Screens from two groups of people placed side by side, forming an interactive narrative.

Interaction between two sides was made immediate, enhanced by the incredible bandwidth and transmission speed used by the setup. This effectively collapsed the distance between the two states, connecting two groups of distant people onto one space. It is evident that a collective third space has already been established in the participants’ minds.

From “Welcome to Electronic Café International” (1992)

Much like other works by Galloway and Rabinowitz, A Hole in Space served not only as an art form, but also as a communicative tool that involves societies on an international, multicultural scale. It is a convenience for people living in different geographical locations who want to connect and socialise virtually without the trouble of travelling physically. While Skype and FaceTime are not considered art forms, this was perhaps the earliest forms of such technology. However, one difference between the past and the present is perhaps the aspect of honesty. With easy access to advanced technology today, people often exhibit only the best sides of themselves on social media. People in the past (without access to live video feed), however, are awed and focus on the communicative aspects of works like Hole in the Space and Electronic Café. Hence, the interaction found in these works are truly genuine and shows the most authentic sides of people.

These interactions may not be as “real” as face to face conversations, but are the closest alternatives in remote communication. The emotional effects, however, are just as real. People act as they normally would in their physical space (1st & 2nd space) and naturally expect an emotional feedback from the other party, and live video streaming is able to translate just that. Furthermore, people tend to be braver and more experimental in third space interactions as the virtual world is just an extension of themselves, shielded from any form of physical harm.

Perhaps these works have slowly translated into online dating and social networking of today, where social media acts as a tool that widens our reach and connect with like-minded people whom we might never encounter in the physical world.