A museum visit during school time?  Y A S.
It’s been long since I’ve visited a museum, and was really hyped for ASM (Arts Science Museum)

The exhibition we visited, was Human+, an exhibition on technological advancement.

To be honest, I’m not a huge fan of technology advancement, as I fear that this will affect survival of humans in future – especially with robots. But on the other hand, technological advancement is really good for the society, as it helps humans save a lot of trouble.

From this exhibition,  I was taken aback. I knew that technology was advancing in a fast-pace manner, but I didn’t know exactly how fast it was. Upon viewing the exhibitions, I realised there’s tons about technological advancement and science that I didn’t know about.

In this post, I’ll talk about 2 exhibition works that best caught my eye. 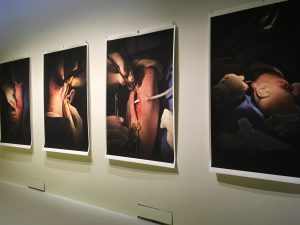 This exhibition stood out to me the most. In the gallery, there were images of a surgery procedure, with open wounds and insertion of a ear.
Initially, I thought that it was an operation to remove the ear. My first impression was that this artist was born with a ear attached on his arm, and wanted to document the procedure of removal.

Upon reading the text, it changed my perspective of the exhibition.  I didn’t expect a normal human would’ve wanted to implant a ear on themselves. Initially a little disgusted, I read further into it, and felt that it is pretty cool?!
Experimenting on himself, he inserted a half surgical and half human ear into his arm, with the intent of making it functional. The surgery was done in 2006, and since then, the artist’s own tissue and blood morphed with the material of the ear, making it fully functional.
However, it is still unable to hear yet. But Stelarc hopes that one day it will be able to transmit sound from the ear, to humans all over the world.

This idea is unique, as it changes the usability of a ear. A hear is originally used for humans to listen, but Stelarc wants to make the ear a form of communication device, for him to communicate, instead of listening. 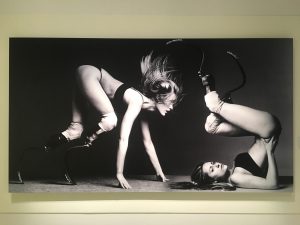 My first impression of this exhibition was: “Is this where Kingsman got their idea from?”
In the movie, Kingsman: The Secret Service, there was a character, Gazelle, that has these legs, which made her invincible. Due to those “legs”, she could sprint and move faster than average.
Thus when I saw this exhibition, I had the idea that she could probably sprint faster than an average human. I thought that she had her legs amputated, as a form of experiment on herself.

But when I read the text, my impression changed again.
Turns out, she was born without fibulae on both legs, and has been walking on prosthetic legs since the age of 2.
Despite not having actual legs, she is an athlete, whom has been training since young. She is also now a model, modelling on runways at London.

Prosthetic legs, is a technological advancement that I feel is  very beneficial for the society. It gives people with disabilities hope, that with technology, their disability will not be an issue to their future.

With the invention of prosthetic legs, artists and scientists has also went further in development, coming up with prototypes that can be beneficial to just everyday life usage. 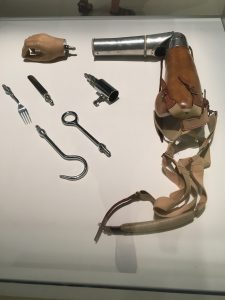 There were prototypes that instead of having hands, there were options to change it to cutlery, or hooks, for other purposes. Also, instead of making it functional, aesthetic purposes were also met.

Overall, from the exhibition, I had many learning points. I learnt more about technological and science advancement, and how far these advancements has been.