Sound is vibrations that travel through the air or another medium and can be heard when they reach a person’s or animal’s air. It is produced by continuous and regular vibrations, as opposed to noise. Sound is an aural component in almost every activity in the world. It is anything that makes sound, or noise. They include: music, kinetic sculpture, instruments activated by wind or played by the public, conceptual art, sound effects, recorded readings of prose or poetry, visual artworks that makes sounds, and basically anything that can produce sound. Each sound, as it is created, propagates amongst the hard Newtonian billiard balls of matter, adding to an eternal din from which the cosmic maker, at the end of his creation, can discern every act, word and deed.

Ever since the early 1980s, there have been an increasing number of exhibitions at visual art institutions that focused on sound. From the article, sound has been captured with the use of phonograph, which has been used in the culture and society. The invention of the phonograph presented a different set of observations – from the multiplying of sounds.

Sound art is not art in the sense of crafts, but fine art. According to Neuhaus, a number of things has little do with art. It’s as if perfectly capable curators in the visual arts suddenly lose their equilibrium at the mention of the word sound. A new art form will be created, say ‘Steel Art’, which was compromised of steel sculpture combined with steel guitar music with anything that has steel in it, somehow have no trouble at all swallowing ‘Sound Art’. In art, the medium is not often the message. However, anything can be art.

With the advancement in audio technology, there are interactive computer programs which can produce sound. Popular music continued compressing, normalizing and filling every moment and crevice of the groove with sound, perhaps in order to suppress a feared existential confrontation with the surface noise. Musicians are also able to explore more options to sound, making use of silence, surface noise, channel noise and etc, to create an audio visual.

What are some of the key questions Barthes aims to investigate in this article?

He aims to investigate how does meaning get into the image, and where does it end. And if it ends, what is there beyond?

The first message is the linguistic message. It uses the caption and labels to decipher the message.

As we go on, we realise that all images are polysemous; they imply, underlying their signifiers, a ‘floating chain’ of signifieds. Readers are able to choose some and ignore others.

There are 2 functions of the linguistic message with regards to the iconic message – anchorage and relay.

Anchorage is the most frequent function of the linguistic message, and is commonly found in press photographs and advertisements.
Relay is more commonly used among comic strips and cartoons.

The linguistic message is twofold – denotational and connotational.

The second message is the iconic message, which is concluded from a denoted image.

The denoted image seems to constitute a message without a code. It plays a special role in the general structure of the iconic message which we can begin to define: the denoted image naturalizes the symbolic message, it innocents the semantic artifice of connotation, which is extremely dense, especially in advertising.

The third message is the non-coded iconic message, where the significance seems to extend over the whole image. The number of signs on the same advertisement varies according to individual.

From the article, I do agree with Roland Barthes’ argument and point of view. I feel that in every image that we see, the visuals are really important. Visuals give us the first impression of the image. Further on, by analysing the image more, we will be able to identify the coded iconic message, which is the primary statement of the image. Next, based on each individual’s past experiences and knowledge, we will identify the non-coded iconic message, which is connoted. This differs as we are all brought up and taught to decipher messages in a unique and different way. Thus, I agree with Roland Barthes.

This is an image which advertises Burger King’s new burger called the “Super Seven Incher” back in 2014. There is usage of both text and image. The linguistic message is “It’ll blow your mind away.” In this case, text is considered a huge factor which affected its relationship with the image in the advertisement.

When removing text from the image, the image shows a female trying to get a bite of the burger. This denotes that one will gain the same amount of pleasure eating the sandwich as they would from receiving a sexual act. The advertisement tried to use sex appeal to promote food. Although it was said that by using sex to attract in advertisements is one of trending methods, this advertisement by Burger King was a flop.

By associating food with sex, it might be considered offensive and degrading to women. In my opinion, the connoted message is that the women is just a slave to men in sex, and they try to portray women to be so desperate to use burgers for their needs.

With the addition of text in this advertisement, it further backs up the image’s message, which means the burger is related to sexual acts. 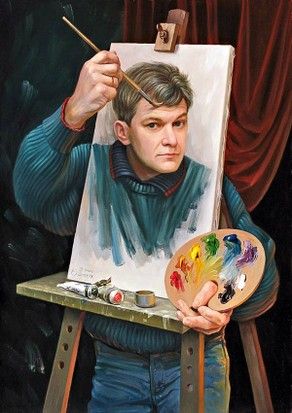 An Ukrainian artist living in Berezhany, Oleg Shuplyak creates artistic surrealism works, via usage of optical illusion. He is well known for imaginative portrait heads named Hidden Images. What captivates me about his work was that when viewing his artwork up close, it shows an image of a scenery, but when it in full portrait, it shows an image of a human.

These are 2 of my favourite works of Oleg Shuplyak.

His art is really impressive as coming up with such optical illusion paintings requires tons of thinking, arrangement and co-ordination amongst the objects in the painting. The optical illusion is easy to understand too, requiring only a few glances to spot the portrait emerging out from the painting.