For my short essay, I will be talking about the Principles of New Media in relevance to my Interactive I Installation Project – The Tree. I will referring to the notes mentioned in class, and also the reading from Lev Manovich, “The Language of New Media”.

From the reading, I understand that when new media are created from scratch or converted it’s composed of digital codes and are numerical representations.

There are 2 key consequence

It was created on computers and originate in numerical form, but were converted from various forms of old media. Digitization happened when converting continuous data into a numerical representation.

To make the tree function in a certain manner, tons of coding was done to set the movement of the tree. Our project definitely involves numerical representation as we have to key in specific numeric data while coding the movement of the servo motors, specifically the seconds and angle, and also the distance of ultrasonic sensors. Behind that, it involves a literal numerical representation whereby the information we typed on the front of the screen converts into binary data.

It is the fractal structure of new media. New media objects are object-oriented, composed of parts made up of smaller parts reminiscent of a “fractal structure”. It consists of a number of separate objects. It is made from independent parts which retain a measure of autonomy even if embedded in another new media object.

Our Tree Project definitely has modularity, be it physically wise or coding. The tree is made up of many individual branches that comes together to form a whole, which shows the physical modularity. For coding wise, each branch is attached to a servo motor, and we have coded it into a manner where every servo motor moves at a different speed, time and angle, and will not be exactly the same or affects one another.

Numerical coding of media and the modular structure of a media object to allow for automation of many operations involved in media creation, manipulation, and access. Human intentionality can be removed from the creative process.

Our Tree Project definitely am able to run by itself without a user, once it’s being coded in. As it is set on loop, the project will keep on running and emits data when needed, until the power source is gone.

However, there is only a certain level of automation for our project as we do need human interaction to make the project work, else it will be static

A new media object is not something fixed once and for all, but something that can exist in different, potentially infinite versions. This means that each time an audience reacts to the interactive art, the output varies. Variability is a consequence of numerical representation and modularity combined and is closely connected to automation.

It is the reconceptualization which occurs during computerization, the transformation of media into computer data. It creates a composite blend of human and computer meanings. It is also the most substantial consequence of media, which suggests that there are two distinct layer – the cultural layer and the computer layer. Both layers influence each other and are being composited together.

For our tree project, it was the theme ‘interstice’ that made us think of doing up an interactive tree, which signifies our cultural layer, whereby we talk about the interstice between people’s comfort zone with the usage of a non-human.

This influenced our computer layer which was when we started to work on how to make the interactive art work the way we want to and also portraying our message.

In conclusion, I believe that my group’s project does consist of the 5 principles of new media and I can’t wait to see it in full action! Now it’s time for me to go back to coding it to make it work!! 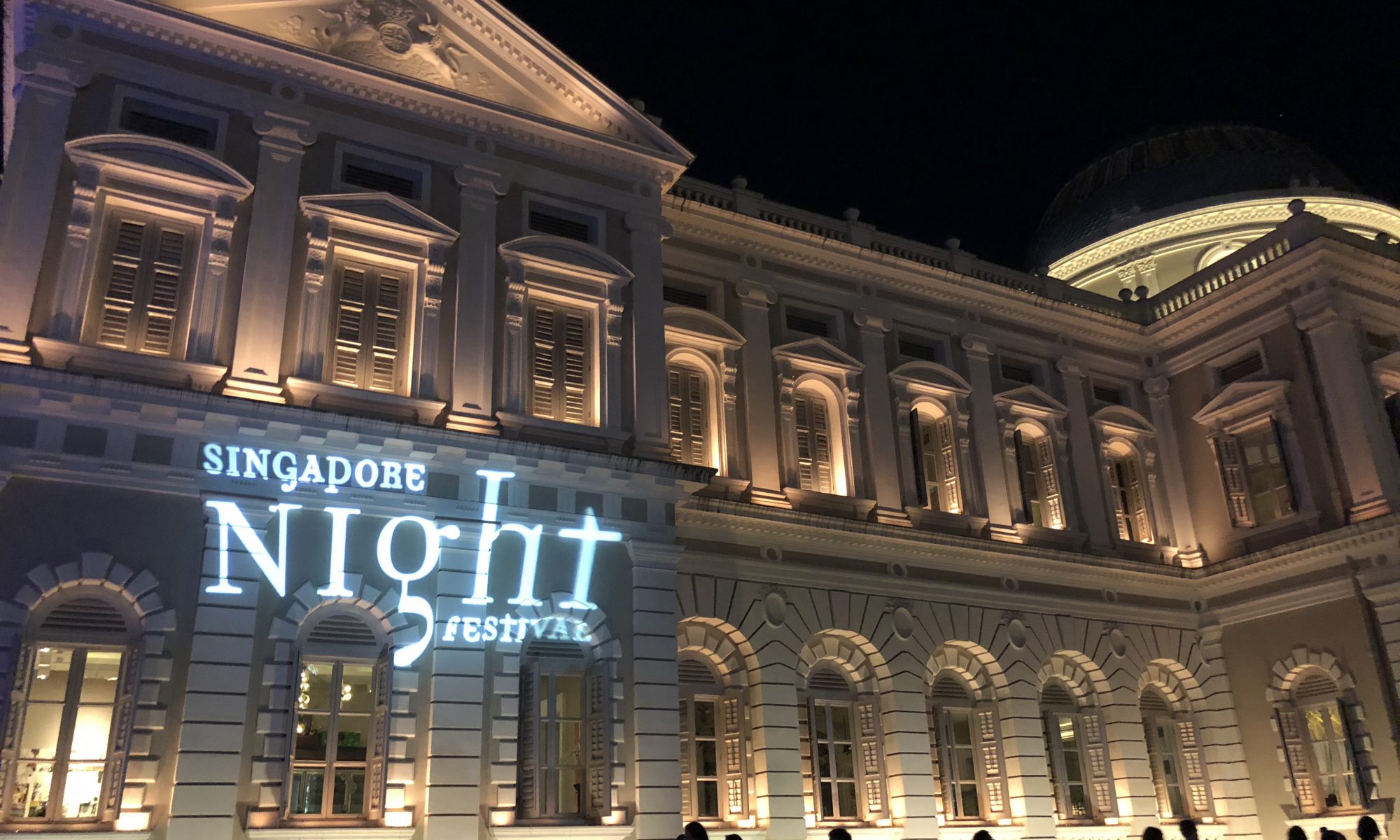 Having been to Singapore Night Festival for the past few years, I honestly felt that it was pretty underwhelming this year. I’ve been to the festival ever since 2016, and I felt that the previous years were better,

Nevertheless, I think the amount of effort and thought put into the artwork of the artists was still pretty commendable by all.

STORY OF THE FOREST BY TEAM LAB

This artwork isn’t exactly under Singapore Night Festival, but more of National Museum of Singapore. 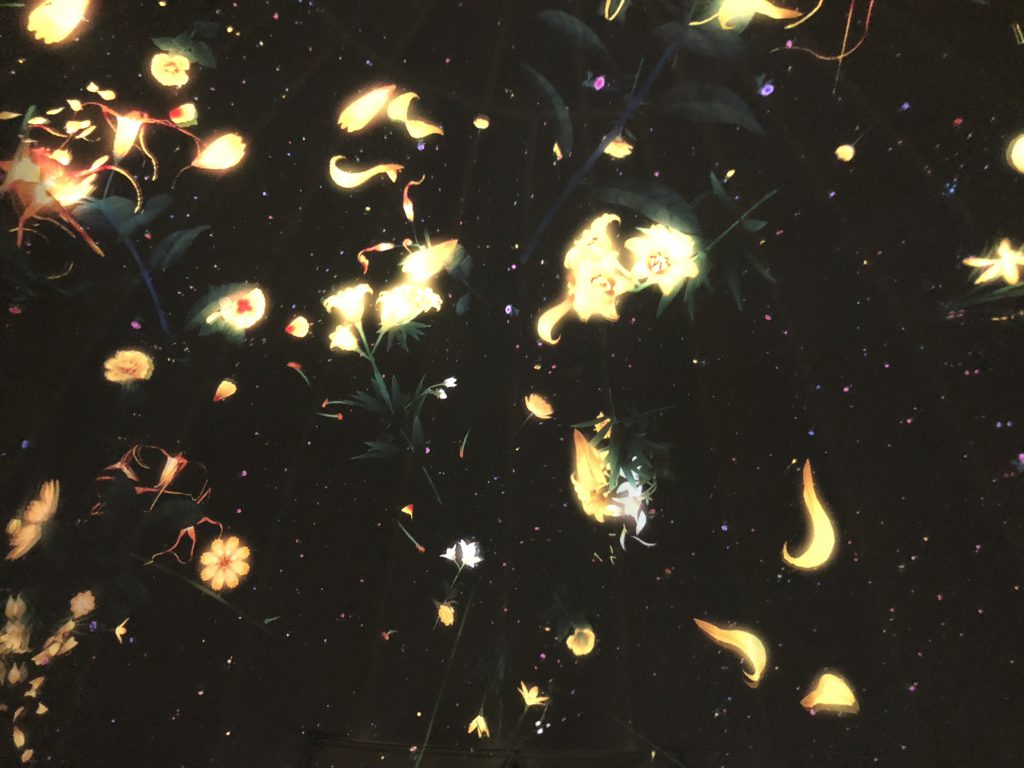 As this installation is done in National Museum’s Rotunda, it fully utilises the shape of the space, the Dome and having participants walk around and down to the final view where they see the whole forest.

The entrance of the installation is at the top of the dome, and viewers see the dome ceiling with flowers blooming and changing over time. Crossing the bridge through the falling flowers of the dome, participants will descend down the passageway through a vast interactive forest inhabited by the animals of Singapore. As they walk down, the forest changes from morning to night, and with dry and wet seasons of Singapore. When they enter the base of the dome, they get a bigger view of the dome, with the flowers blooming at the top, and having animals and forest coming up when the participants move nearer to the wall. This artwork is very relevant to National Museum, where it talks about Singapore History – more heavily dedicated to William Farquhar Collection of Natural History Drawings.

The artwork is depicted in real time by a computer program, and offers interactivity to a certain level. The first part of interaction with the artwork is more passive, whereby we are just walking into the rotunda and looking at the flowers. The only interaction we had initially, was walking around the dome. But it became slightly more reactive, when we reached the base of the dome and we could see how having participant’s presence, how it could change the work.

I felt that this artwork was a very interesting way of depicting Singapore, as it’s seldom thought about singapore being related to animals and forest as it’s more of an urban city. It was also a learning journey for us, where we get to know more about species relevant to Singapore.

This artwork spoke to me as it’s the artist’s take on Singapore on a different approach, and making it interactive for participants, so that they won’t just feel bored walking around the dome.

Although it’s not officially under Singapore Night Festival, I think this artwork is an honourable mention as amazing artworks can be found within the interior of the museum, instead of just the outskirts surrounding!

This is the second artwork I’d like to talk about from Singapore Night Festival.

The intention of this interaction is for participants to take a “leap of faith”, by jumping from a step to the other. While participants jump, the lights of the step changes, and there are several variations on the lights. This artwork is reactive and has high interactivity level, as participants have to make an action for a reaction to the artwork. But that being said, in the middle of the interaction, there is a light sculpture whereby interactivity is not needed.

The anatomy of this interactive system was very simple, with steps that lights up whenever we step on it. There are several rims of colours on the step, and it lights up differently.

And that’s it for my trip to Singapore Night Festival 2018! 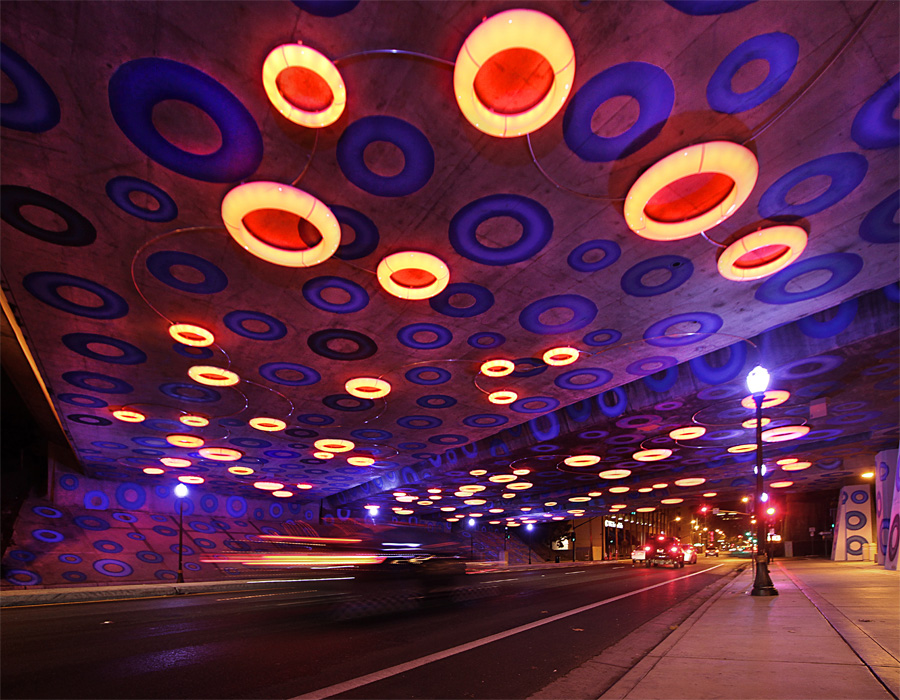 1What is the situation or interaction created for the participants?

The situation created is when the participants are passing by the tunnel and motion detects it. The LED rings lights up whenever someone walks in.

The intention of this interaction is to raise awareness of people passing by the tunnel.