The musical mask was envisioned as a primitive mask-like object that had the ability to “sing” – or more accurately, read the music that was playing in a connected device and react to different parts of said music. 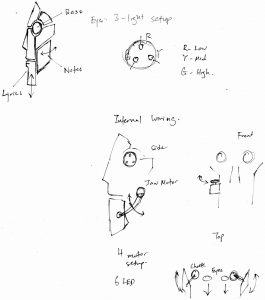 Early concept sketches of the mask.

The mask would have been constructed out of either 3D Printed Polymer, or Laser cut acrylic plates, assembled with glue. Intended build would have involved 3 motors and 2 x 3 LED for eyes.

The mask had 3 motors – 1 for the jaw, two for the cheek “flaps”. The jaw would respond to any lyrics in the music and open/close accordingly. The cheeks would rotate and flap based on the changes in pitch in the song.

The mask also had 2 “eyes” – plastic globes with 3 LEDs in each – Red, Yellow and Green. The eye would flash a colour based on the bass of the music being played. A low frequency bass would result in red blinking, a medium one yellow, while a high bass would be green. 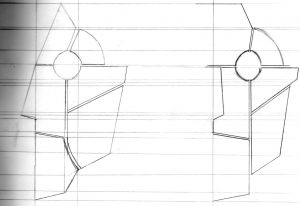 Sketch of the Mask for 3D Modelling.

The mask was sketched out, and then modelled in Maya. 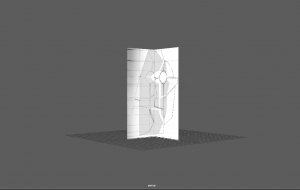 Modelling with sketches as reference. 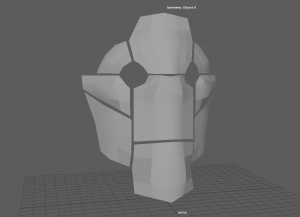 The finished mask. Very primitive design, but intentionally so in order to be laser cut from a flat sheet.

Unfortunately I was unable to complete the physical aspects of the robot for submission due to time constraints and other commitments. However I did manage to replicate how the mask would have functioned using 3D simulations and controllers. 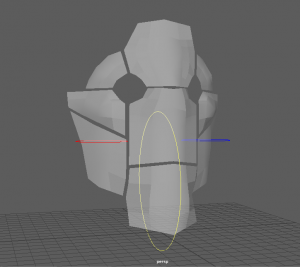 The mask’s 3 basic movement controllers – Red and Blue for right and left cheeks respectively, and Yellow for the Jaw. 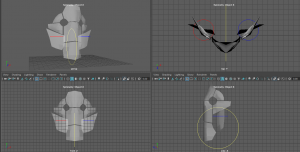 Cheek controls in action. Functioning in parallel, the cheeks would have responded to pitch, turning inwards with low pitch and outwards with high pitch. 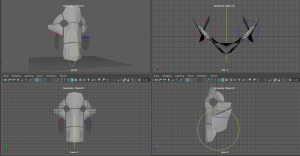 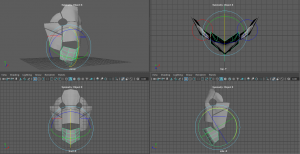 Jaw up-down controls in action. This would have responded to lyrics and reacted based on whether words were being sung. Open=singing, closed = not singing. 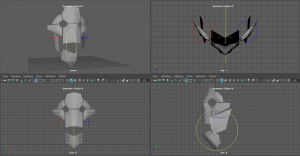 An example of both jaw and cheek controls in action. 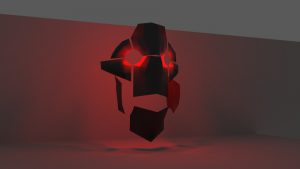 An artistic render of how the mask would have functioned.