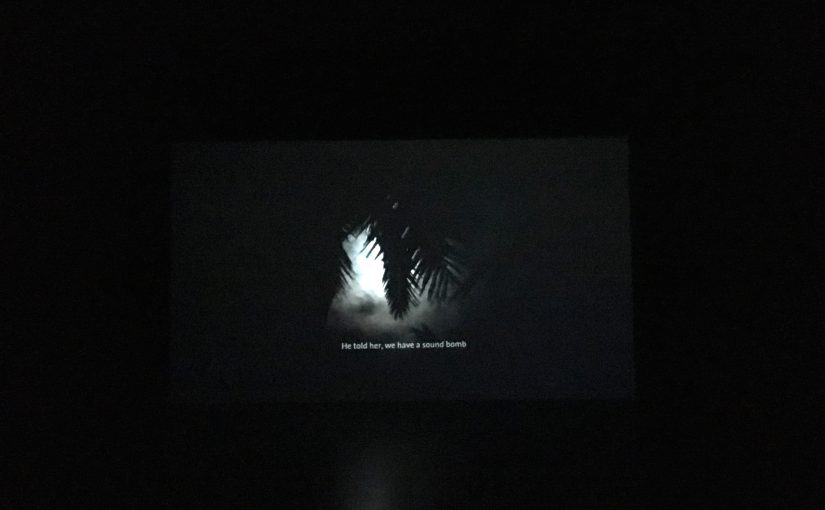 Our first class outing to CCA was to view an exhibition done by Indian artist and filmmaker, Amar Kanwar. His works explore politics of power, violence and justice through immersive installations by presenting harsh realities in the realm of the poetic and the metaphysical.

“The Sovereign Forest” focuses on the exhaustive struggles over the resource-rich land of Odisha, in East India, and the issues concerning its ownership. This project took about a decade(!!) to be completed as Kanwar has been filming the industrial interventions that have reshaped and permanently destoryed parts of Odisha’s landscape. The resulting conflicts between local communities, government and corporations over the use of agricultural lands, forests, rivers and minerals have led to an ongoing regime of violence that is unpredictable and often invisible.

“If a crime continues to occur regardless of the enormous evidence available then is the crime invisible or the evidence invisible or are both visible but not seen?” – Amar Kanwar 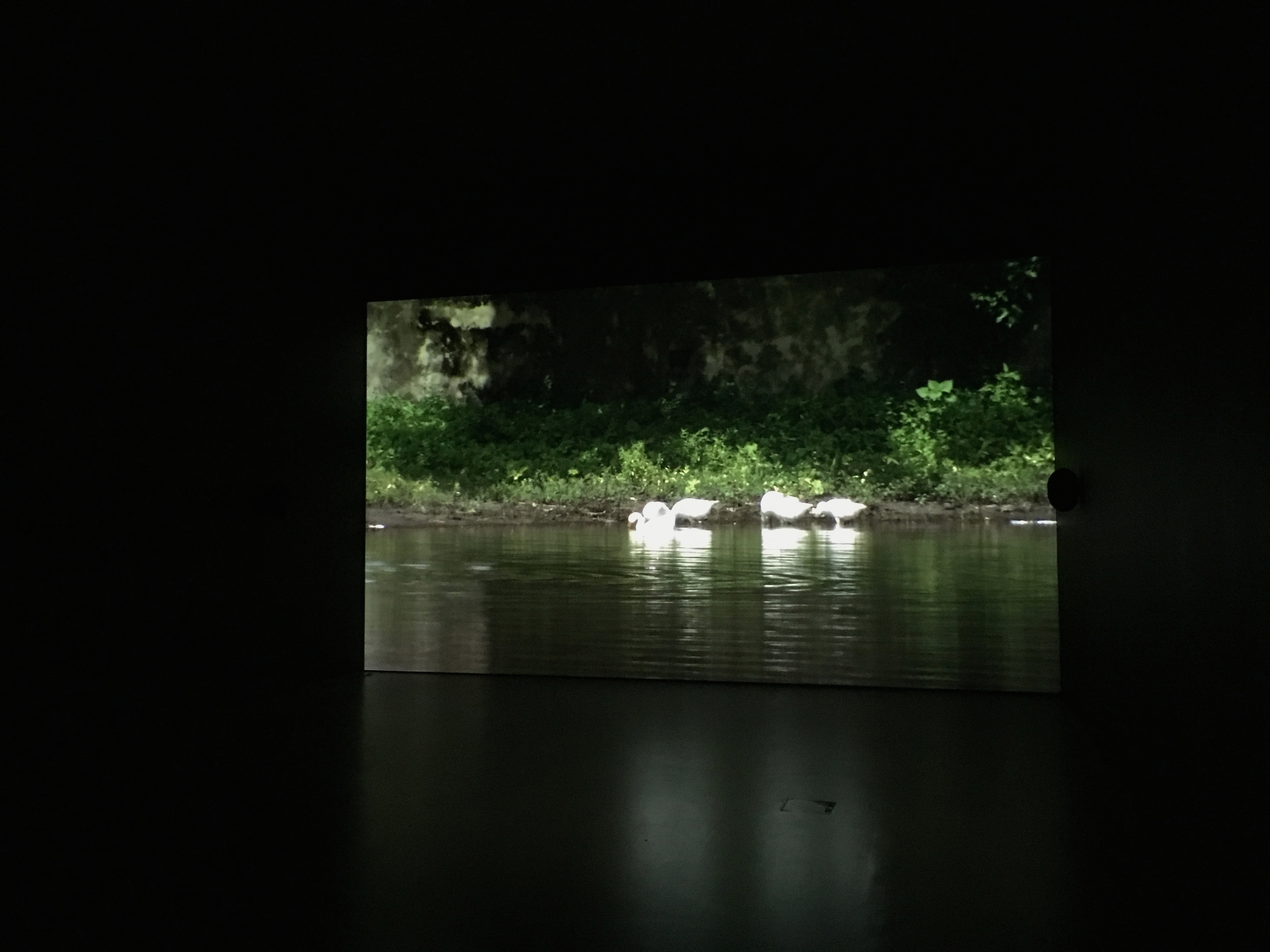 The exhibition starts off with the film – “The Scene of Crime”. In the 40 minutes film, there was a total of 10 stories which showed the before and aftermath of the battle, that serves as a stark reminder of how the forest looked like before and how the battle has greatly affected the environment and the people who lives there.

I realised that there were no dialogues in the film at all and the only audio that played along with the scenes were simply the background sounds that was recorded – the rustling of the trees, splashing waves and even the breeze. The experience felt so calm and peaceful, which brought me into a trance-like state while watching it. There’s a certain stillness to the film and the reduced sound gave a meditative rhythm to it. However, at some point of the film, there was a loud thunder which scared the shit out of me as I was so engrossed in watching the scenes. I felt that the way the artist juxtapose the quietness with a sudden loud noise was really effective as it gave a sudden shock to me which sorts of broke me out of the “trance” I was in while watching his film. It was something like… a wakening or sudden realisation on what is actually happening?

It fascinates me at how the artist managed to capture my attention and made me so engrossed into the film that even I didn’t know it myself, though I was falling asleep (oops) but surprisingly, I managed to absorb the entire film.

Even though the film does not really have those fanciful, cinematic shots, the simple, wide shots that Amar Kanwar took, paired with the reduced background noise really worked well together. It’s not a messy film that has so many things happening at once which the viewers might not have enough time to absorb entire scene, “The Scene of Crime” is clean and simple, and I really like it.  It’s a quiet and slow film, paired with minimal text yet it’s impactful.

I really like how Amar Kanwar incorporated the audio in the film and I would like to try the reduced background noise for my Project 3. I felt that even though the audio is reduced to only the background noise, it’s more impactful as it really draws in the viewers and this allows the viewer to concentrate on one thing, rather than many things at once.

Less is more – that’s what I learnt after watching this film. I’m someone who always tries to do and try out as much stuff as I can for my projects which I’ll end up killing myself as I do not have enough time to complete everything, thus affecting the quality of the work. One does not have to overdo things, or take fanciful shots or try to make your work is complicated/abstract as possible, sometimes keeping things simple is better. 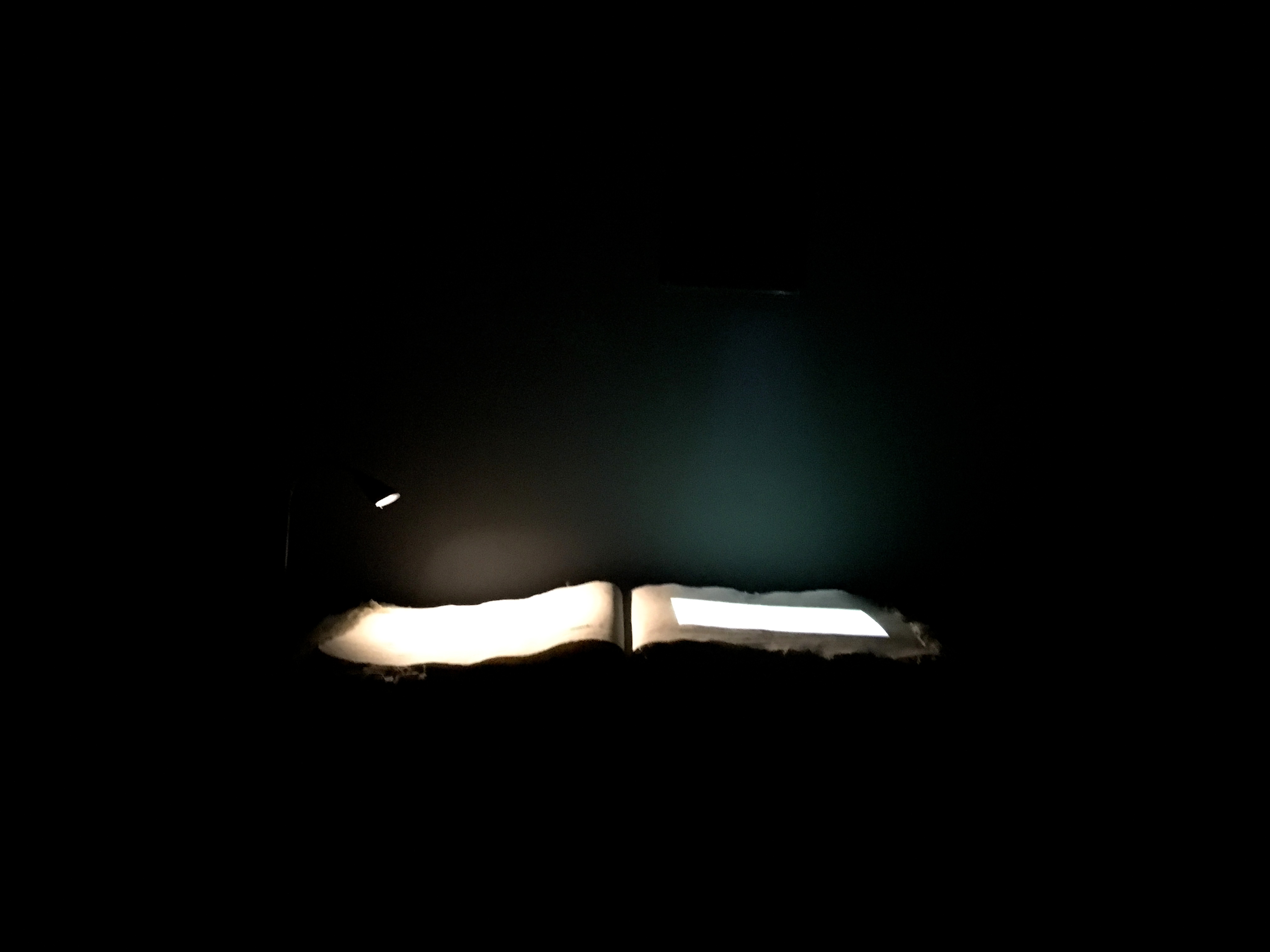 Moving further into the exhibition itself, what caught my attention was the third book, titled “The Constitution”. It’s a book with lots of textures and minimal text (titles), with an image projected on the right side of the book. Personally, I love anything that has to do with textures, especially threads. Moreover, each chapter has different textures to it and the textures tells a different stories. 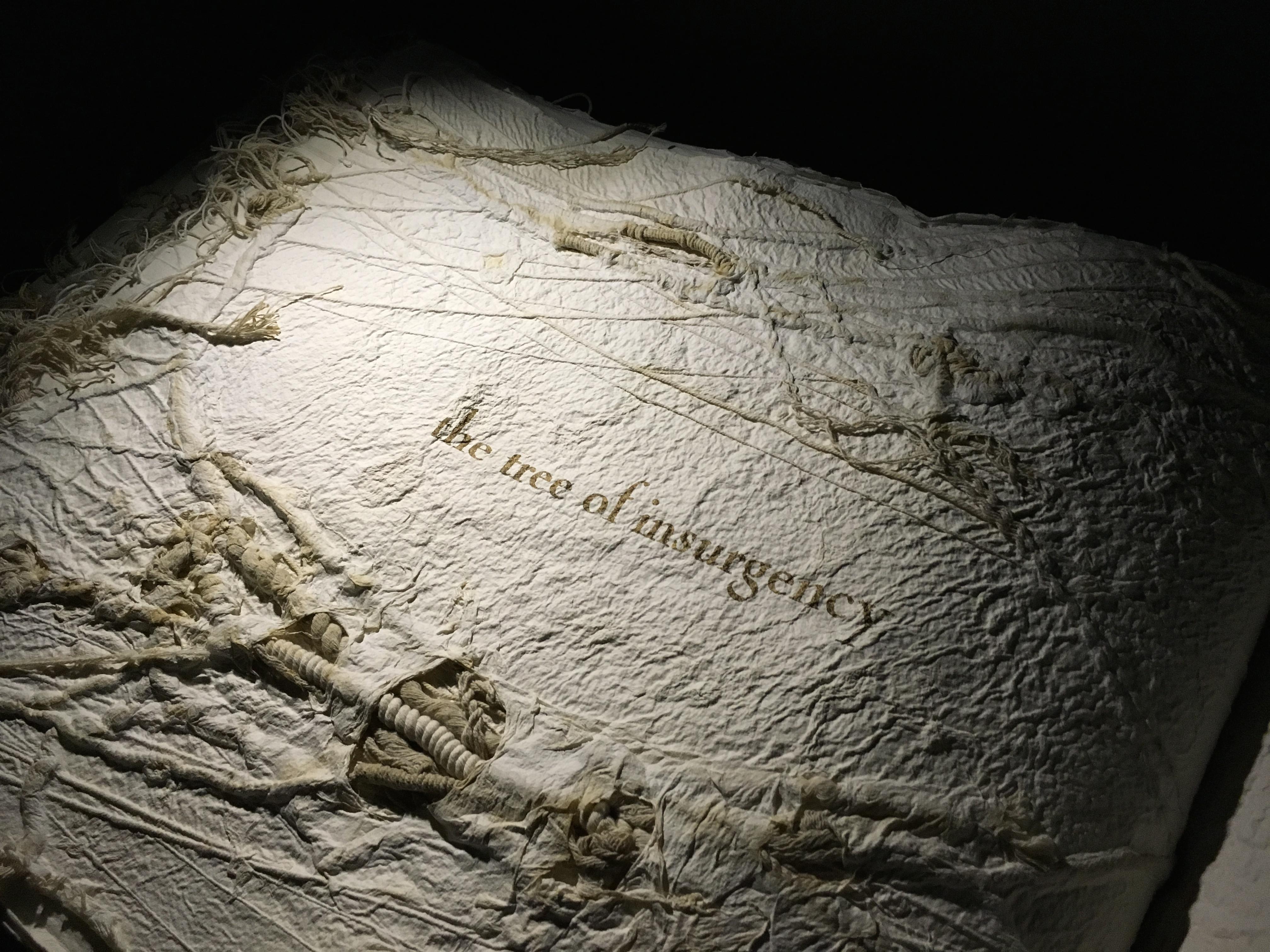 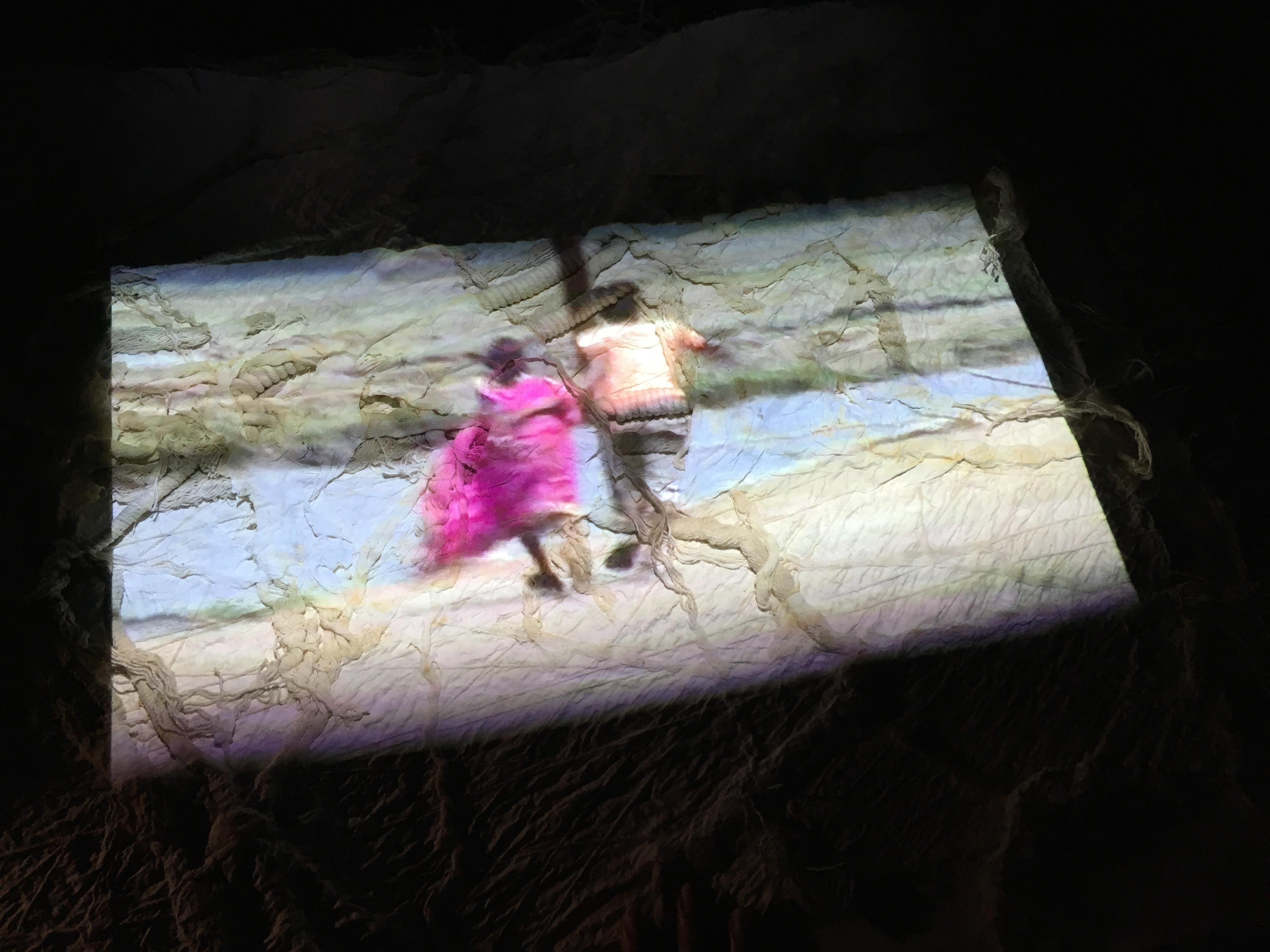 While browsing through the book, there’s a video projected on the right side of the page shows the battle of over the land of Odisha. The textures on the book reminded me of tree roots and what I can infer is that the textures represents the aftermath of the environment after the battle, which shows how badly affected the environment became.

Overall, I felt that Amar Kanwar is really inspiration and amazing at for this exhibition, he is so passionate and has done extensive research over a decade to piece up this piece of work – The Sovereign Forest. If he have the patience work on a project which runs for about a decade, we can do it too. (well first thing first gotta complete the assignments due this week)