To begin sourcing for inspiration, I looked to Behance for artist references. As I decided on illustration to be my medium, I thought it would be an appropriate place to begin as most of the illustrations on Behance was digital.

I found a plethora of references I could use, ranging from colour studies, composition, concepts, as well as character design.

One of the biggest inspiration for this assignment was Bruno Mangyoku. His work features brilliant composition techniques as well as minimal use of colour. Only varying the tones from a limited selection of colour. 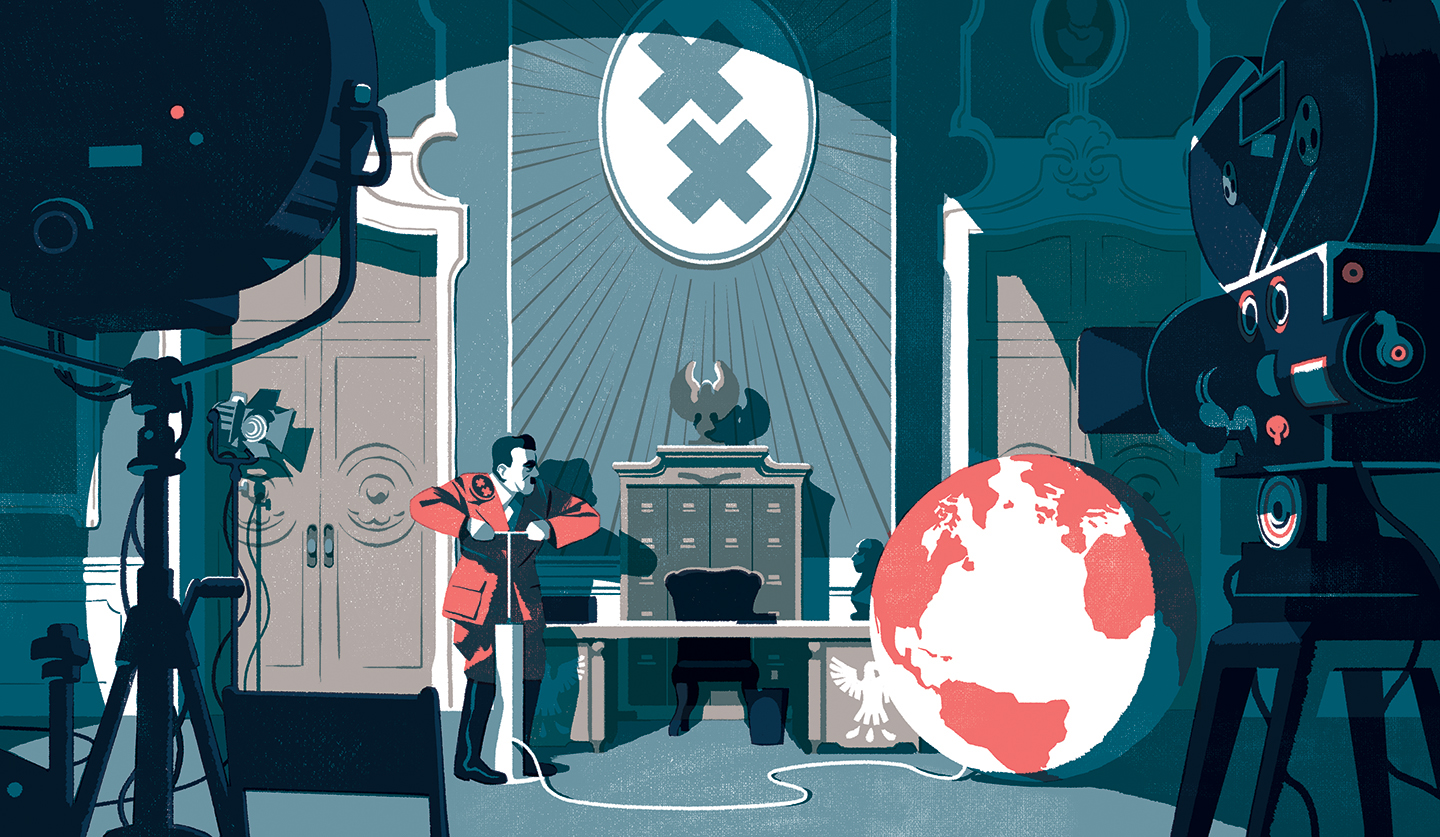 The use of the circular spotlight and harsh shadows really draws the audience to the message of the image. The use of red tones to bring out subtle details in the composition ties everything together.

The use of warm colours in this composition, accompanied by the hint of cooler tones to represent foliage sets the mood for this piece. After being exposed to colour theories and harmonies, I am able to appreciate works like these as it takes tremendous amounts of planning to be able to evoke the desired mood with such a limited range of colours. The use of the wooden floor boards to direct the eyes to the man was also an ingenious touch, one which I overlooked initially. 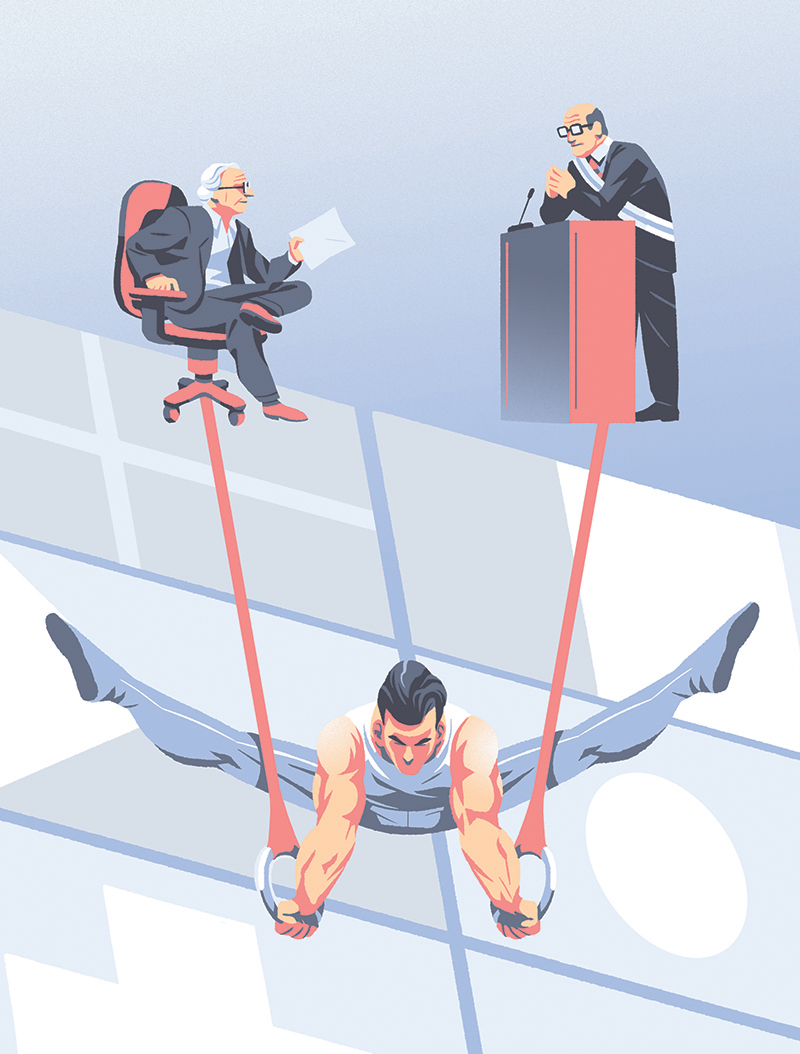 The use of implied lines through the ropes attached to the roman rings makes you wonder what message the image is trying to convey. I would interpret this image as sports bringing 2 opposing parties together, be it business and politics. 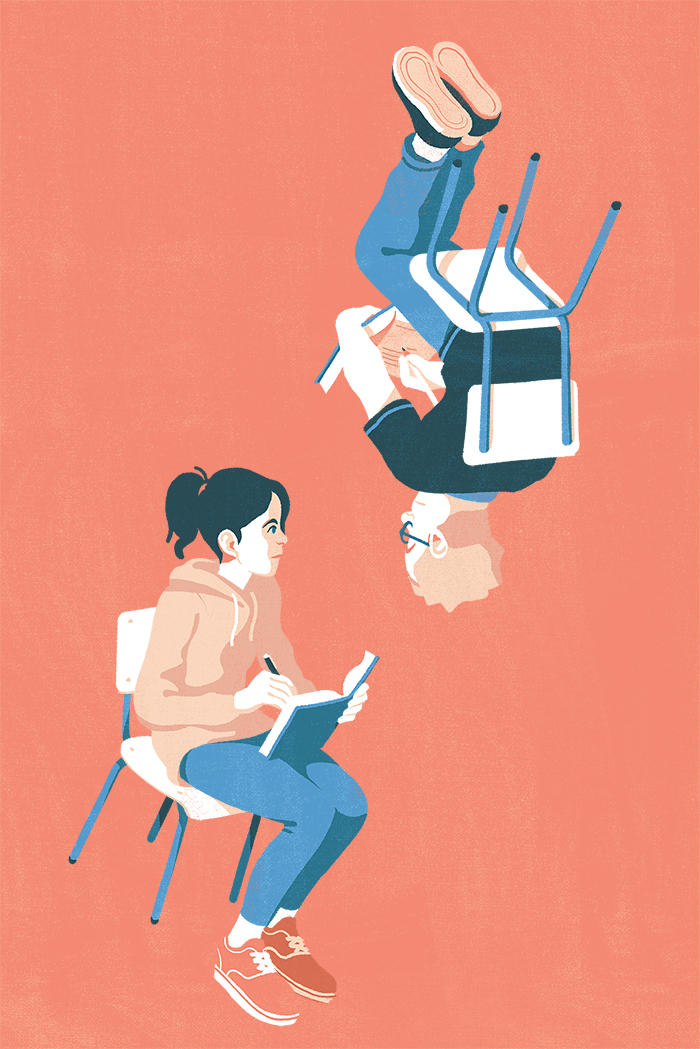 This composition features a sort of Yin and Yang composition which creates tension. I also like how their eye lines meet which is a nice touch for the composition.

I enjoy the character design by this artist. A surrealistic piece depicting a space man on a planet with cacti? I like the touch of the astronaut having rosy cheeks as it softens the tone of the image and makes it more lighthearted. 🙂 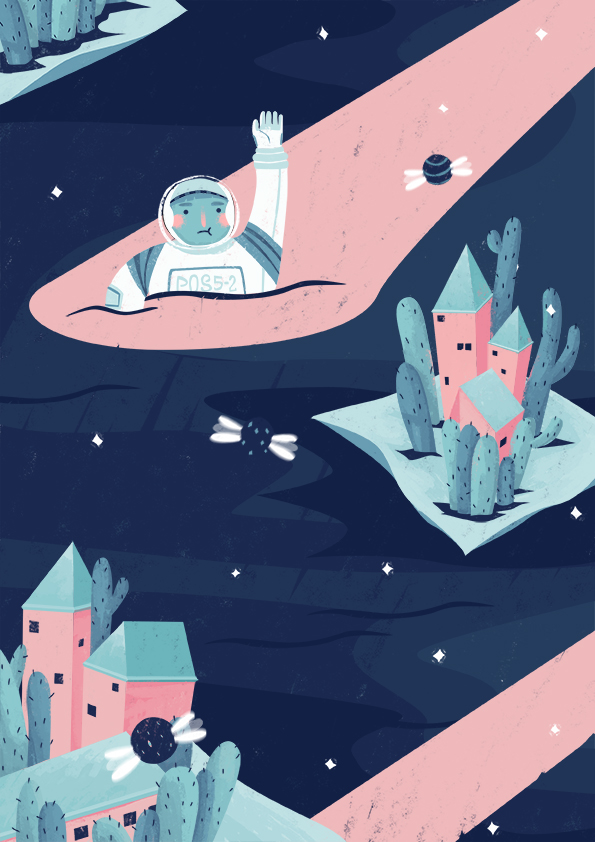 I stumbled upon this piece and it was interesting as the concept closely ties into the project we are currently working on, which only consists of three frames. This artist represents everyday situations in a comical sense, which is what most of us are able to relate to.

The simple flat layout works well for the illustration as it makes the message short and succinct. Texture is also added to give the composition a certain feel of depth.

The frames are so well composed, it does not even need the words to convey the message. 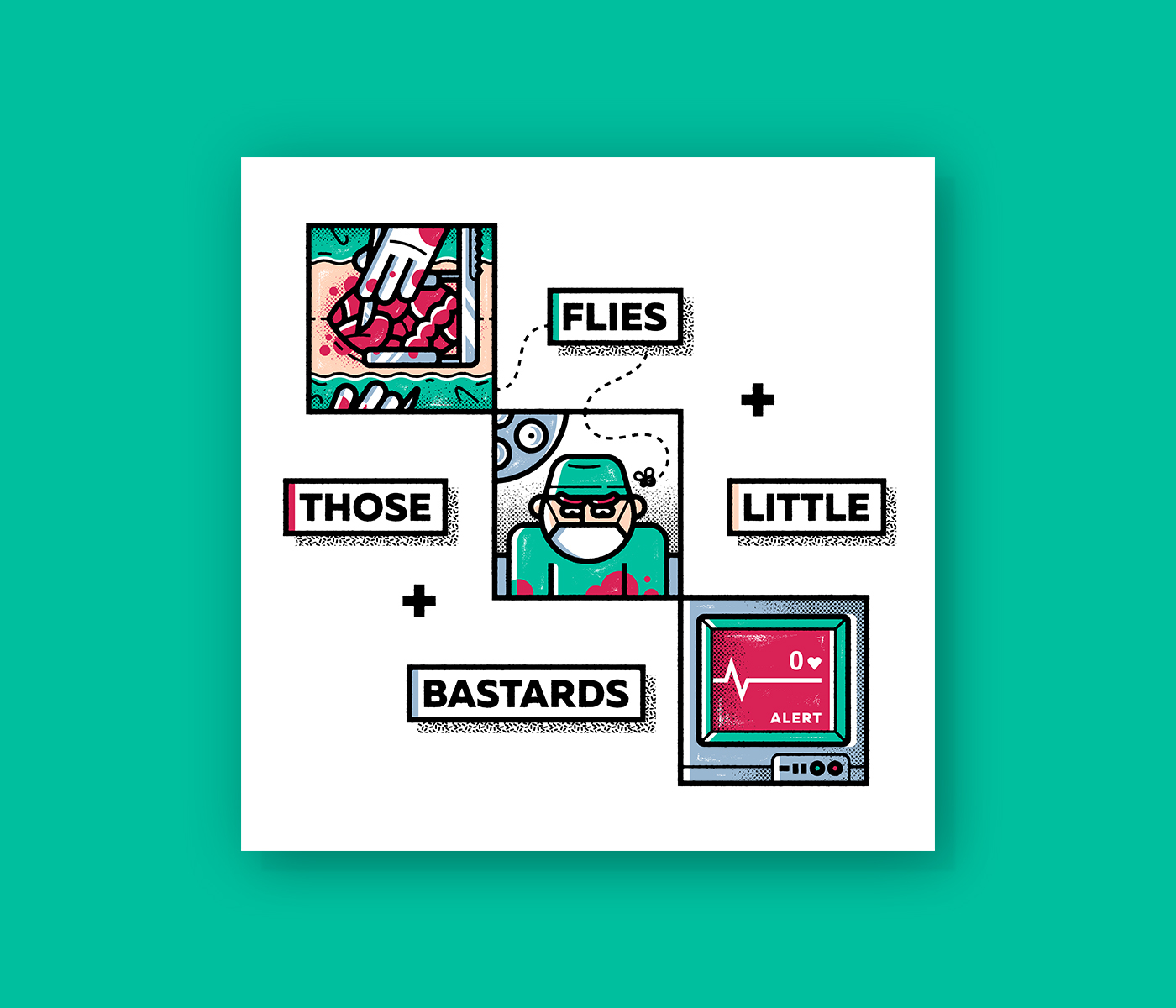 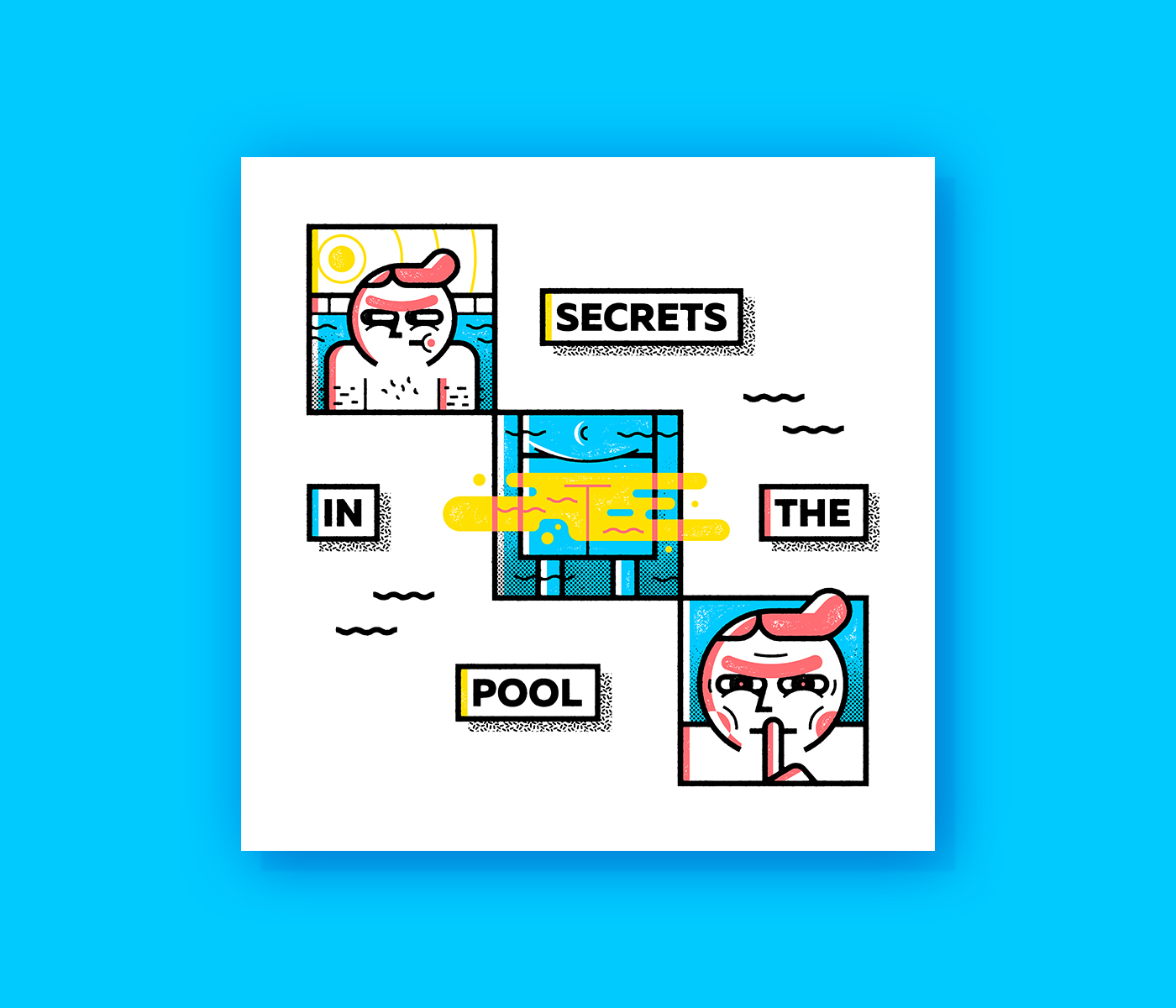 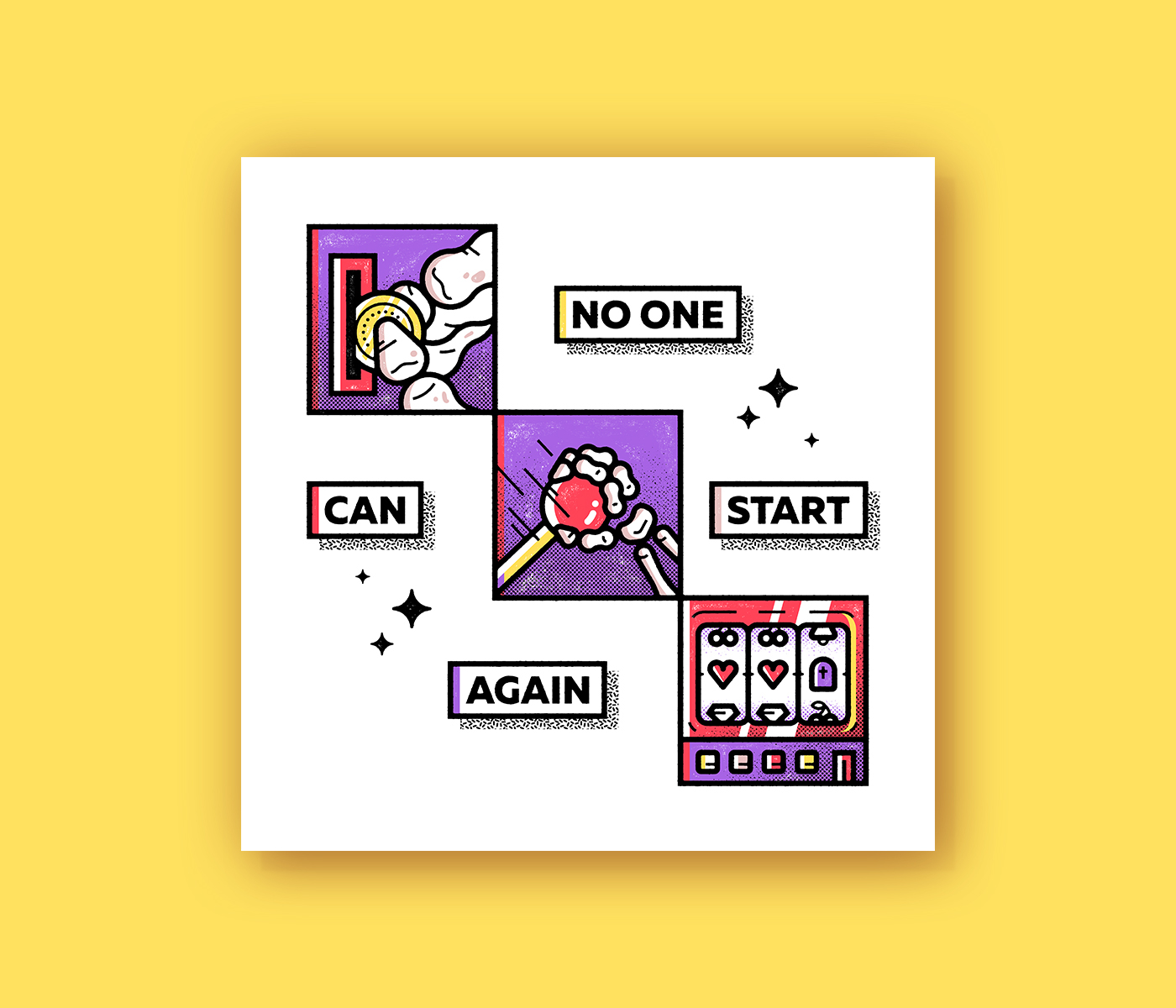 These compositions are slightly more complex in terms of the use of gradual colour tones, as well as the focus of the image protruding from the circular ‘boundary’. This would be an interesting concept to explore in my work as it would make the focus stick out, literally.

I ventured into traditional illustration techniques to see how I could compose my shots. The clean lines and flat lay of Japanese woodblock printing makes  it an ideal study for this assignment. However, the image would look too cluttered if where were so many elements. It would also be difficult to create an interesting composition with a square form. 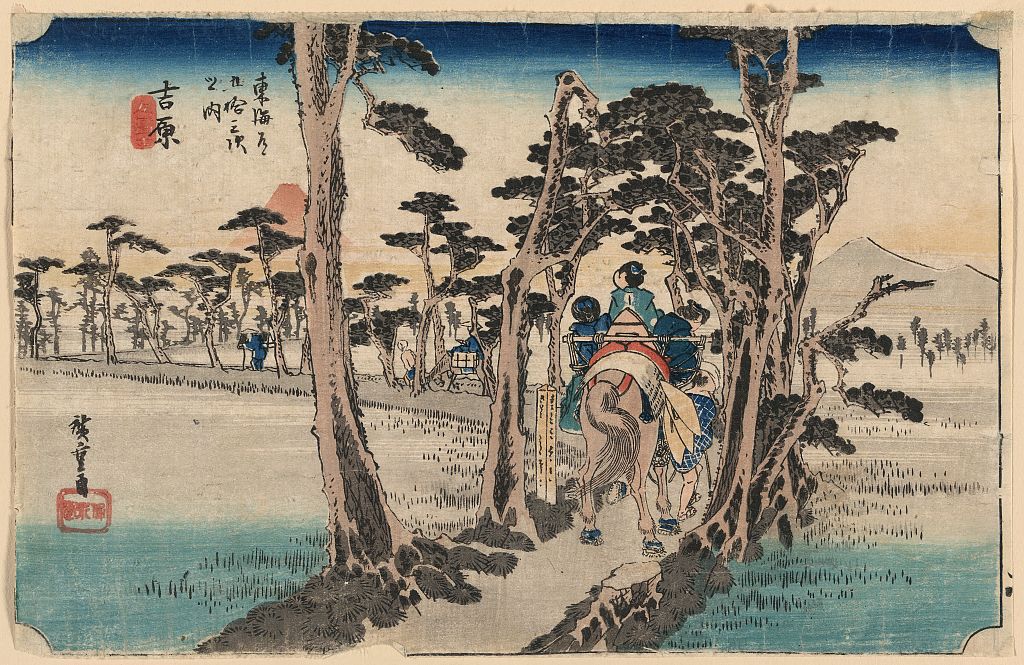 This artist modernised Japanese woodblock printing and created this complex illustration on Adobe Illustrator. The amount of details this image has is staggering. 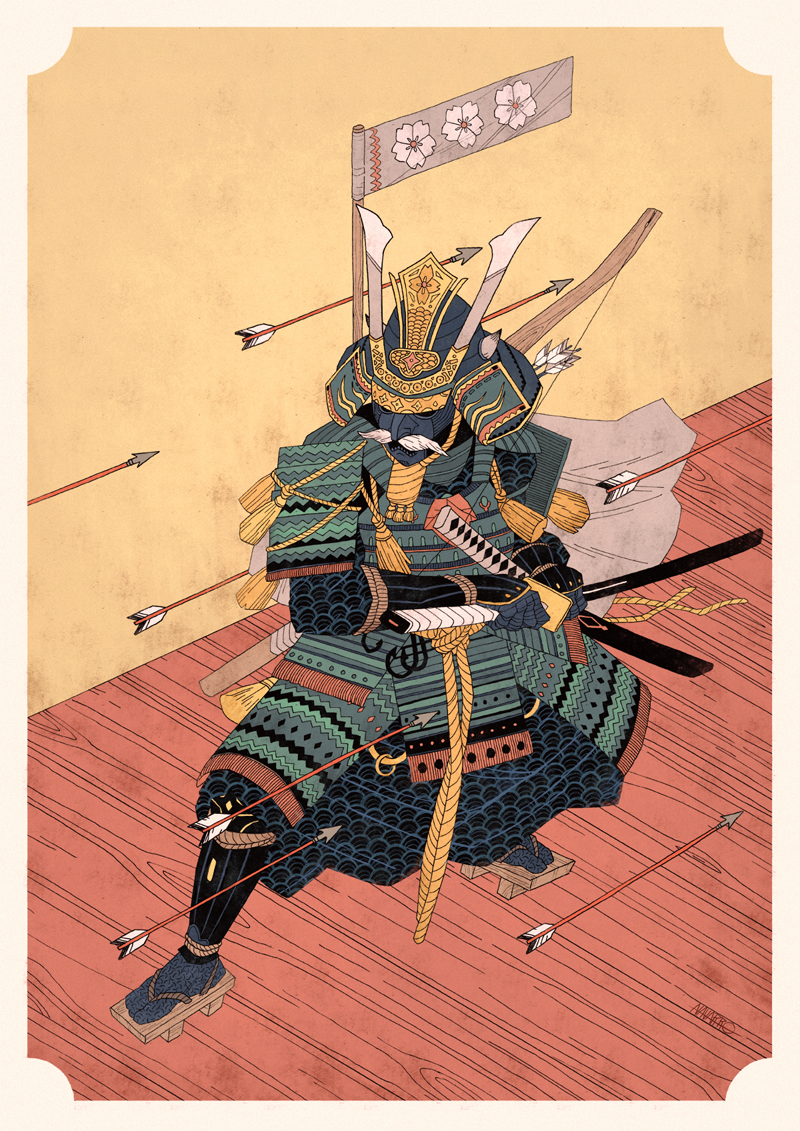 I went to look for similar flat lay styles and I found this. The strokes of this image is much more simplistic as compared to the one above. However, to be able to execute the Japanese flat lay style well, I would be required to use a many different colours, which may not be in theme of the assignment.

I also started to search for ways on how I could depict myself in my work.  I stumbled upon this artist while I was listening to music and I fell in love with this illustrations as they were just so adorable. The line work was simplistic which was the style i was going for.

This is one character which most of us are familiar with. The simple expressions have captured the attention and love of many, accompanied by its vibrant colour, it makes it hard for anyone to dislike this character (unless if you are allergic to eggs or are a vegan) 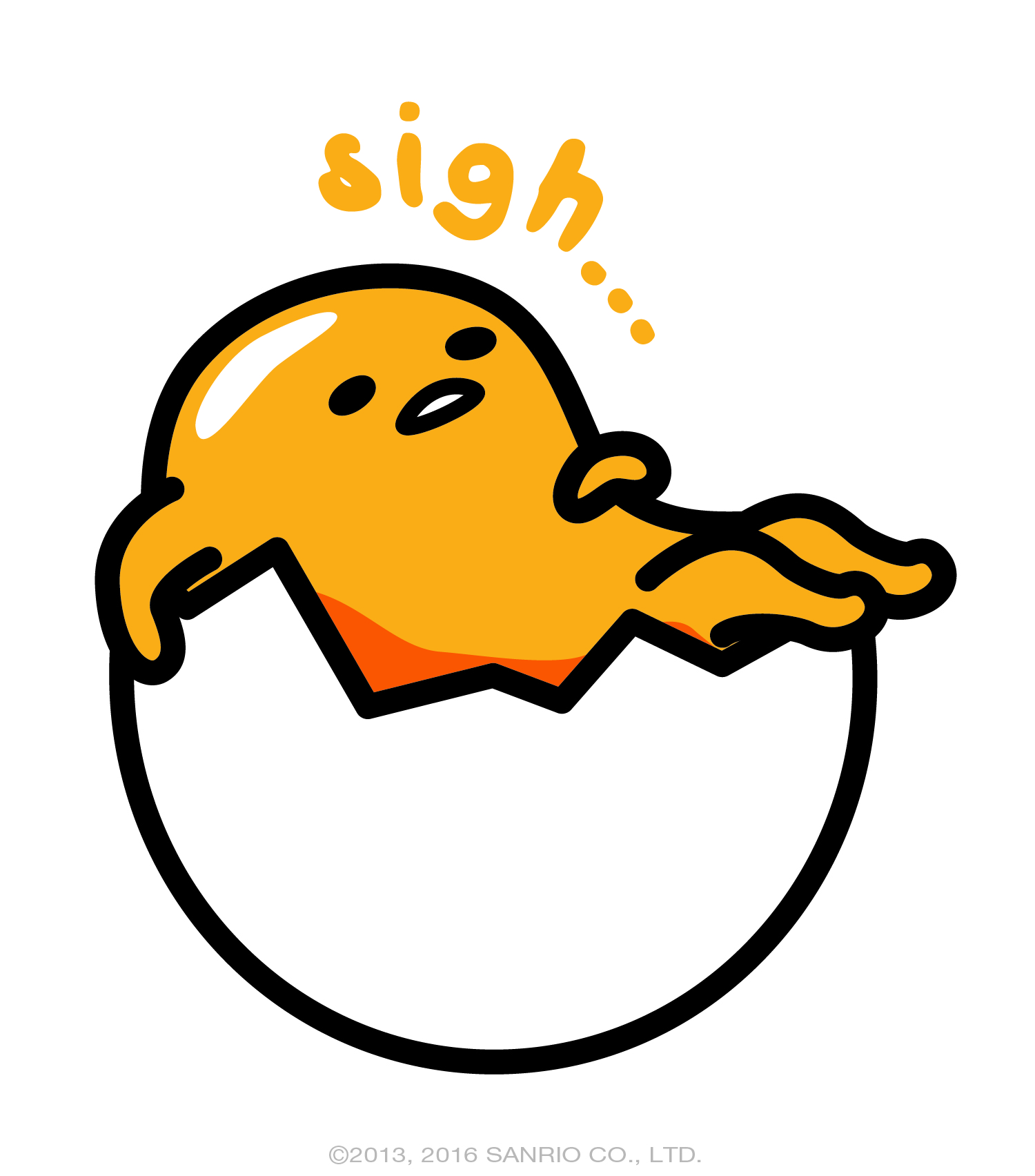 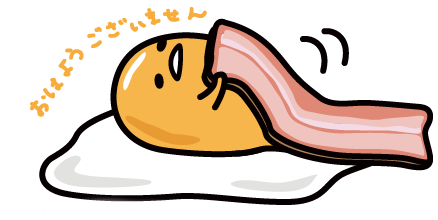 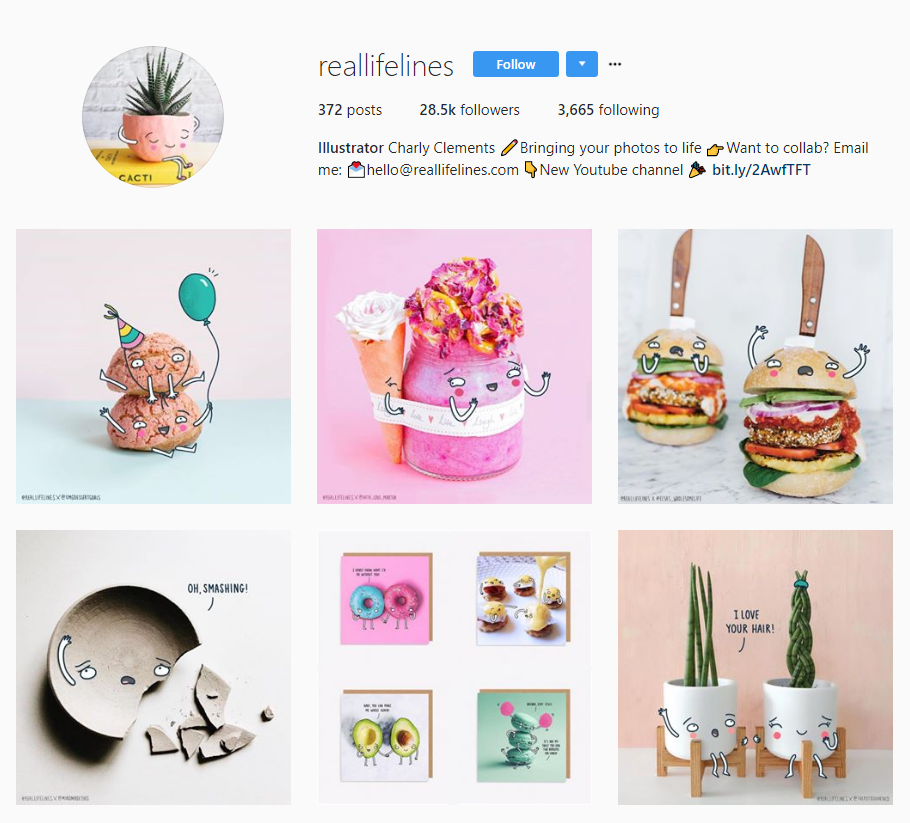 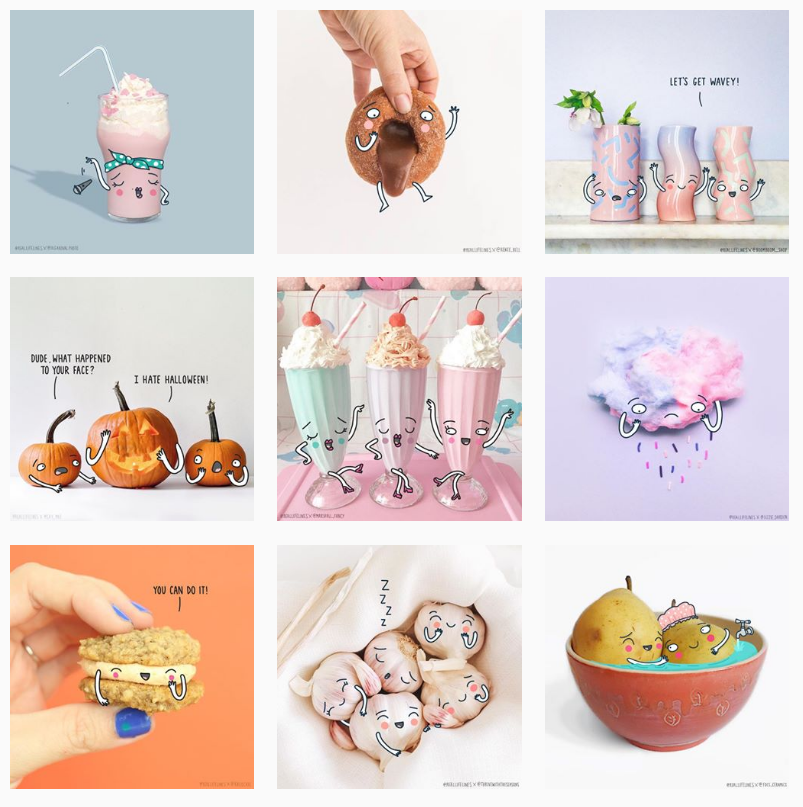 This is another concept I wanted to explore! I really enjoy how the artist is able to make use of good to express such emotions. The artist also uses pastel tones which is pleasing on the eyes and evokes joyous emotions.

Other personification ideas would further be explored during my process post.