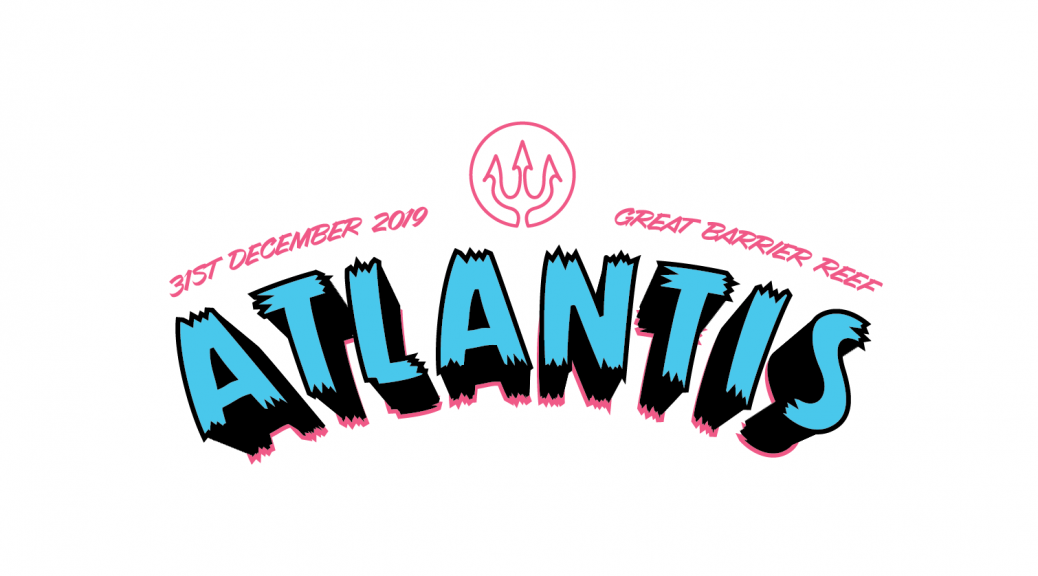 Greetings! It is the time of the semester when our bodies are mostly running on caffeine and what little sleep we had on the train to school. Welcome to submission period folks!

The brief for our final project for illustration for designers was simple – create a 5 piece collateral featuring the opening of any event. This meant that we could create the wildest ceremonies or events we could dream of, and with that, I began to brainstorm!

My immediate reaction was to search for the most quirky and eccentric types of ceremonies people around the world would celebrate! I came across many different ones including A Cheese Run Festival where grown men literally chase after a wheel of cheese down a hill in the UK. Or, there were bull runs in Spain where they unleash a bull down the street, only to have participants run away from the impending doom of getting impaled by the horns of the bull. (As you can see, it’s clear why men don’t live as long as women do.)

However, I decided to settle on something closer to my heart and something which I have always wanted to design – I went with designing collaterals for a Music Festival.

I began searching for moodboards to get a better sense of the aesthetic of designing a successful concert poster. What I enjoyed most about concert posters is the grunge style of illustration and the use of hatched or bold outlines in their work. Another telltale sign of a concert poster would be the use of custom handcrafted typefaces as well as the use of limited colours.

Some of my favourite punk rock bands also use similar illustrative styles for their album covers and I was inspired by the look of it in the creation of this poster. This was a major throwback to the good days where my Ipod would just be filled with these bands.

For my poster, I didnt want it to be any regular concert, but rather, with a twist! I decided to have an underwater themed concert, held at the great barrier reef! It would only be apt for it to be held there!

For the stars of my show, I had to think of dynamic sea creatures with limbs as I wanted them to hold conventional rockstar poses in my poster! This would make the poster a lot more dynamic in nature and create a central focus for the elements!

This is my initial layout of the poster. 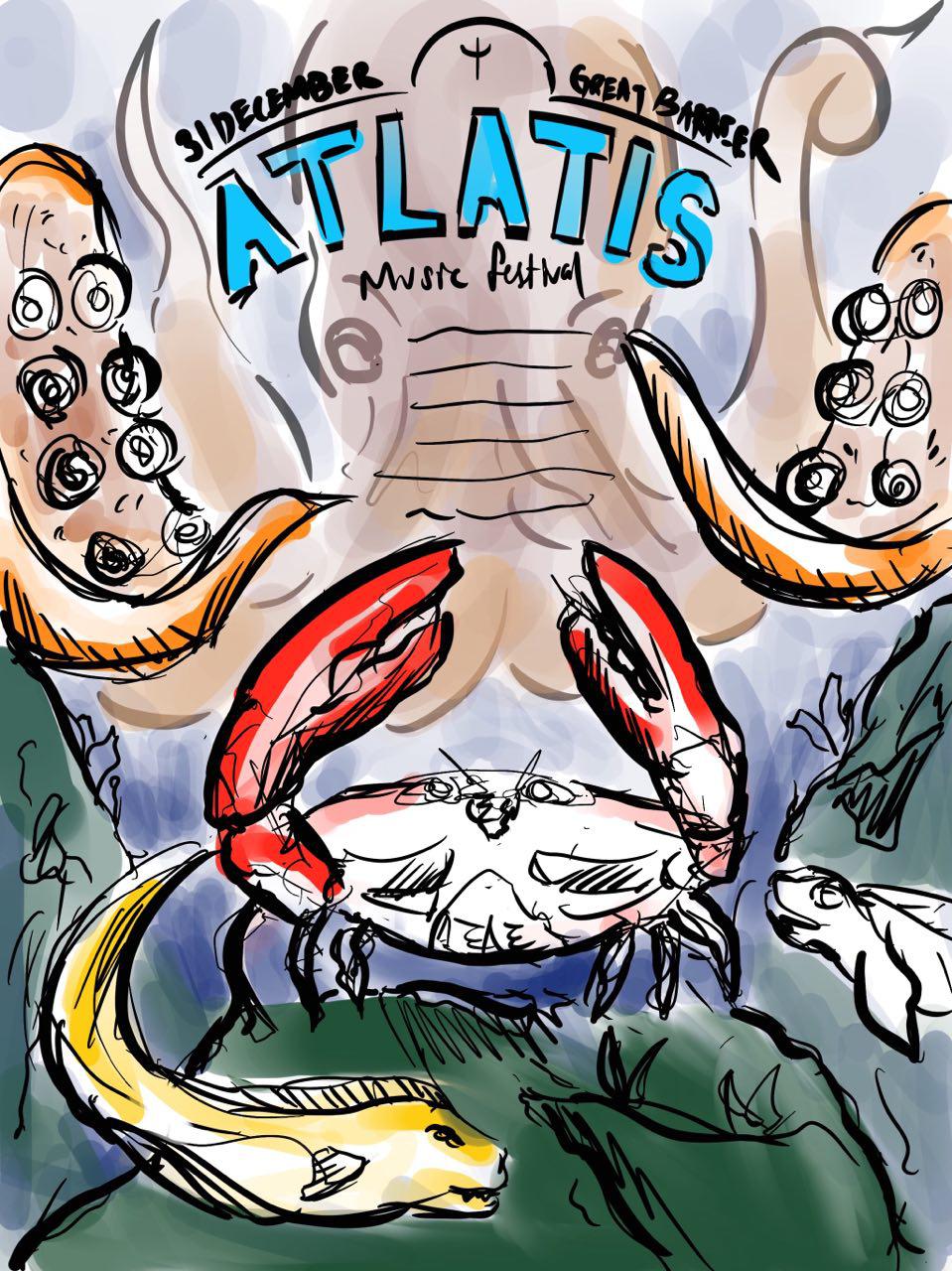 A crab was chosen because I feel like they create a very interesting compositions with their limbs and the details of their shells just screams badass, with spikes and a shiny menacing look! I wanted to have creatures swimming around, looking like they are having a good time, all while a giant octopus is ominously looming in the background. This is to give the piece some depth, as well as a narrative, making the crab a protagonist as he isn’t afraid of the octopus – suck it you killjoy!

I also thought it would be interesting to use the suction cups of the tentacles as speakers to hint more towards the idea of a music festival – one element which is vital in any concert.

This is the quick sketch of the direction I wanted to head towards within my poster. After this, I started to create the elements and necessary characters I would need to bring my poster to life.

The first and most important character was the crab! I had several references and an idea of how he would look like on stage. One thing which I had trouble was getting the angle of the guitar to look realistic. There wasn’t many references of guitarists holding up their guitar from the perspective I wanted, so I made a 3D mock up of it and used the 3D guitar model as a reference. 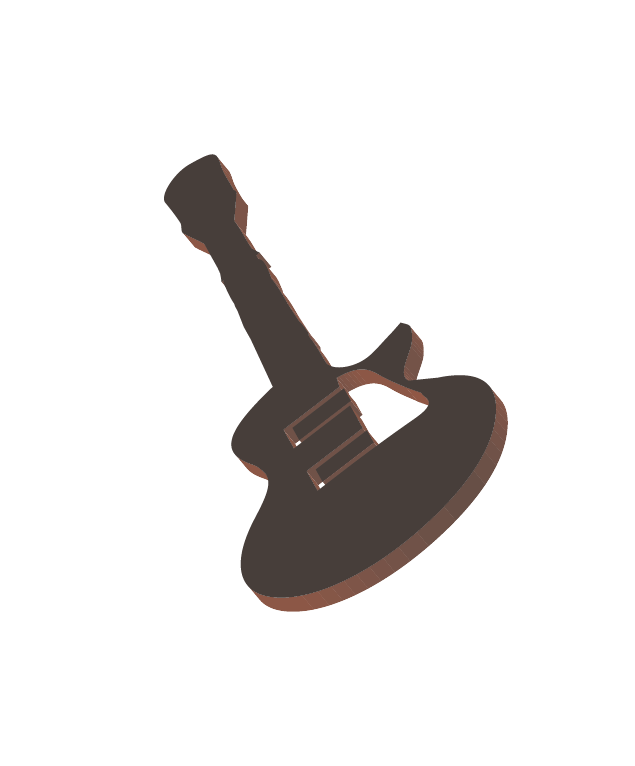 This is the process I went through to create a rockin’ Crab!

The next element I wanted to create was the large octopus looming in the background. As the tentacles would be placed in the foreground, I decided to work on it first.

The tentacles of an octopus was definitely something I struggled with as it was difficult to make it look realistic especially with all of its squiggly legs. To make things more difficult, the angle of the suction cups proved to be another challenge as some would overlap another. I had to reference many images to create a realistic tentacles! 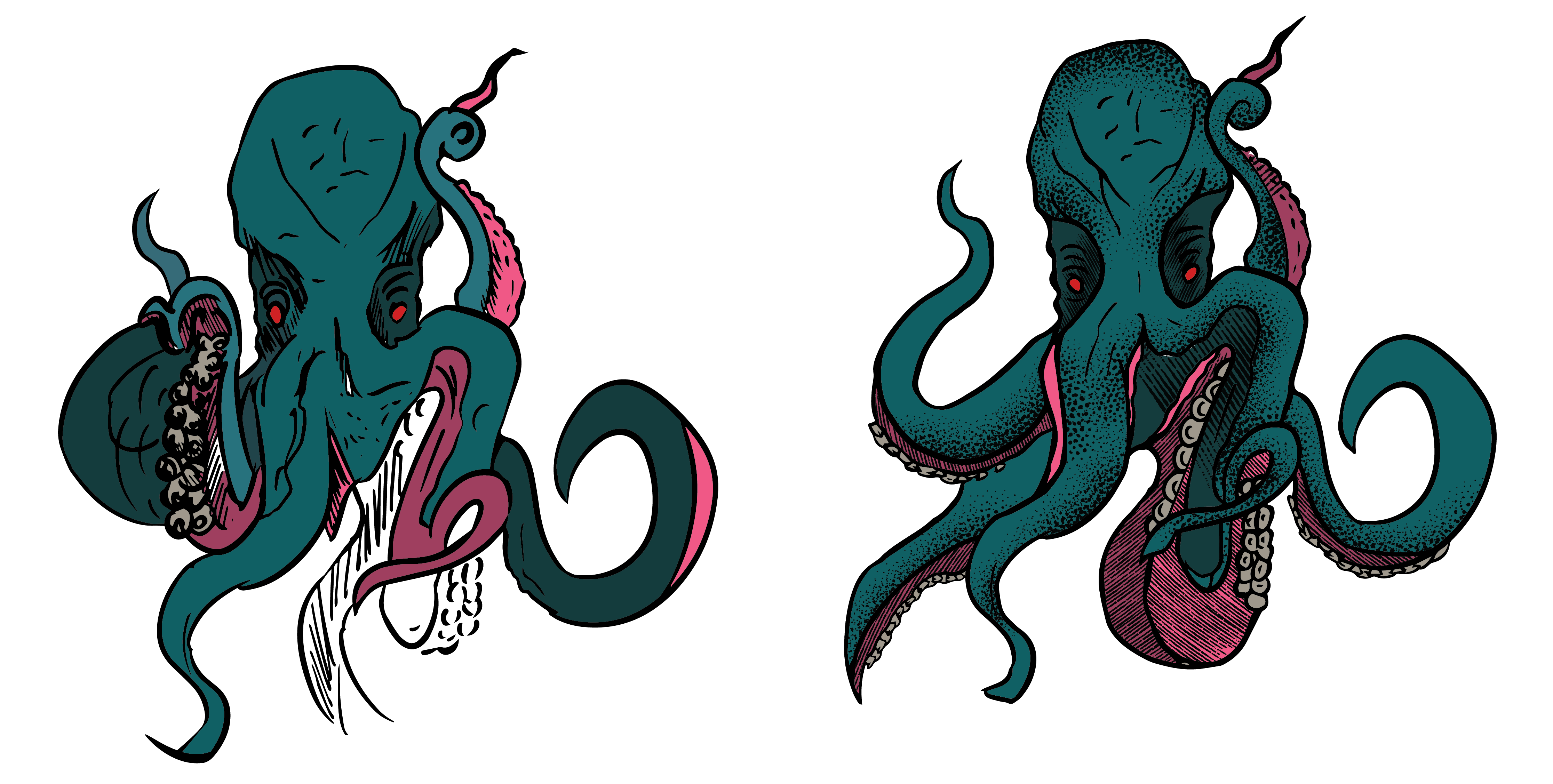 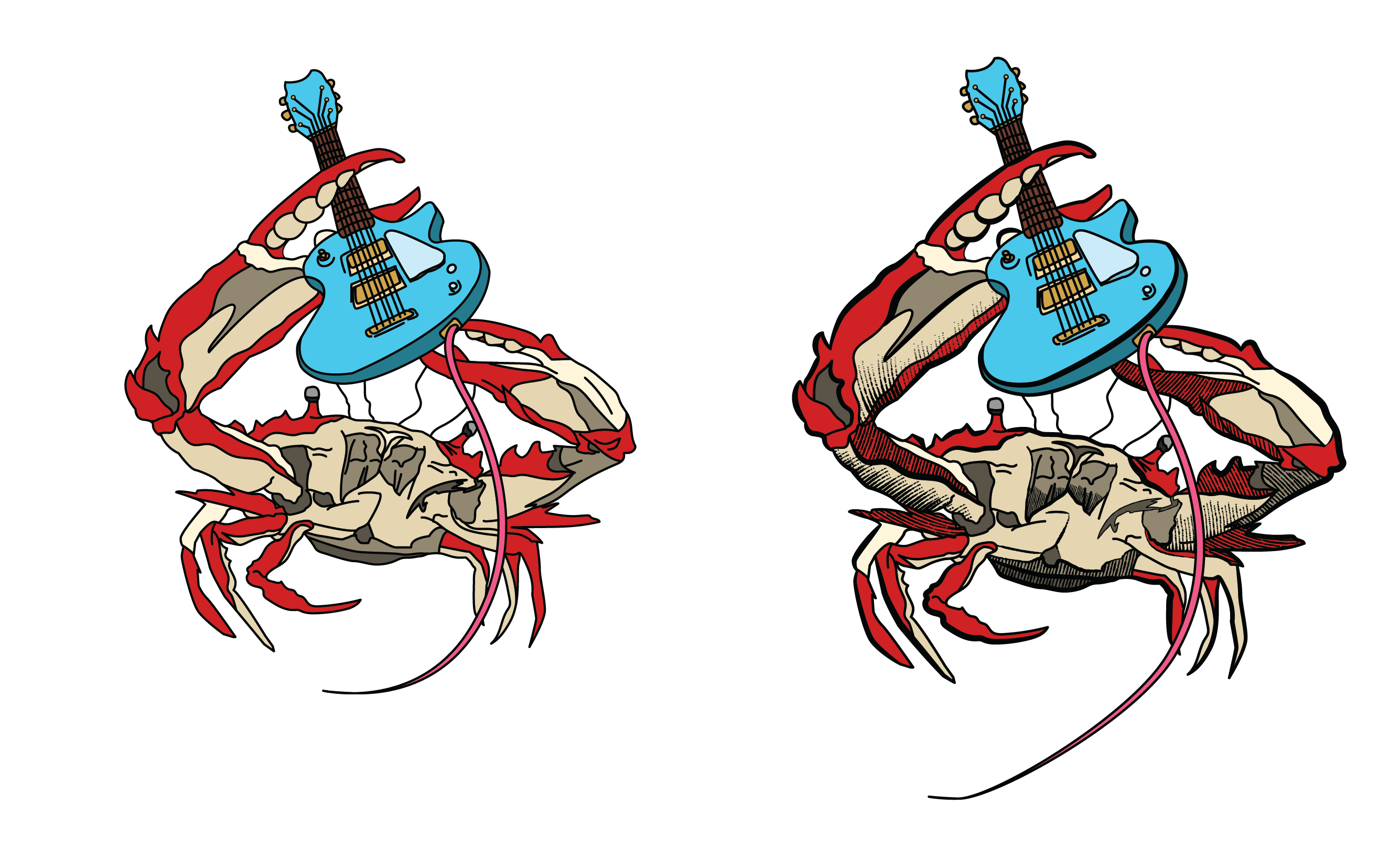 Initially, when I started to piece the poster together, the left tentacle of the octopus was incredibly distracting, thus i decided to simplify it a little by just having his arms down.

The shading styles I used were a combination of hatched strokes as well as stippled brush effect. The different strokes I used were to push the grunge and worn effect further in my design.

Next, we have the typography of the event. The type treatment of the font would undoubtedly give the poster the signature Punk Rock Music festival vibes. 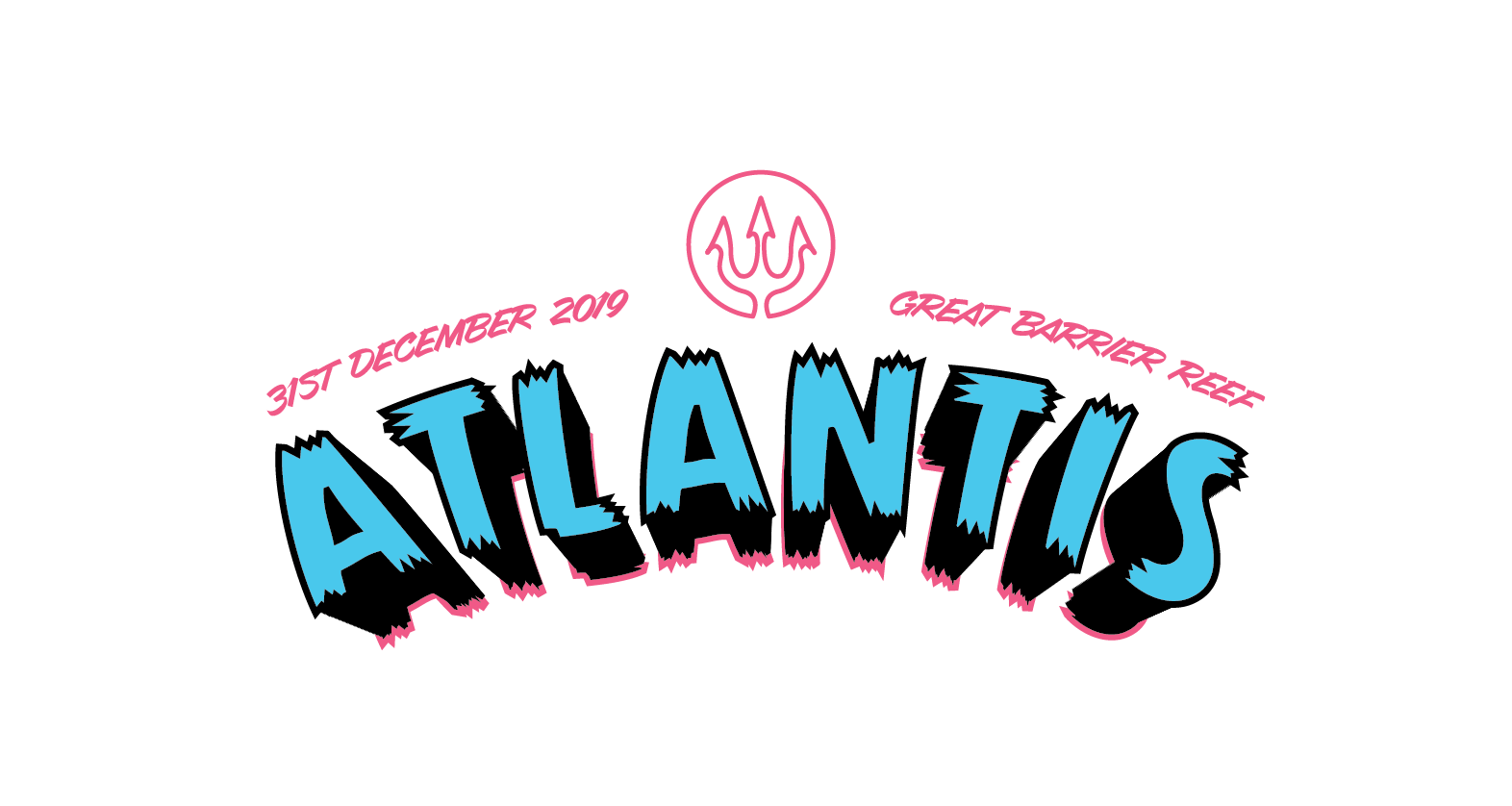 The logo in the title head was inspired by Aquaman, the ruler of Atlantis in the comics. I felt that the trident would be a good logo for the organisation holding the concert – and I named the organisation as follows. 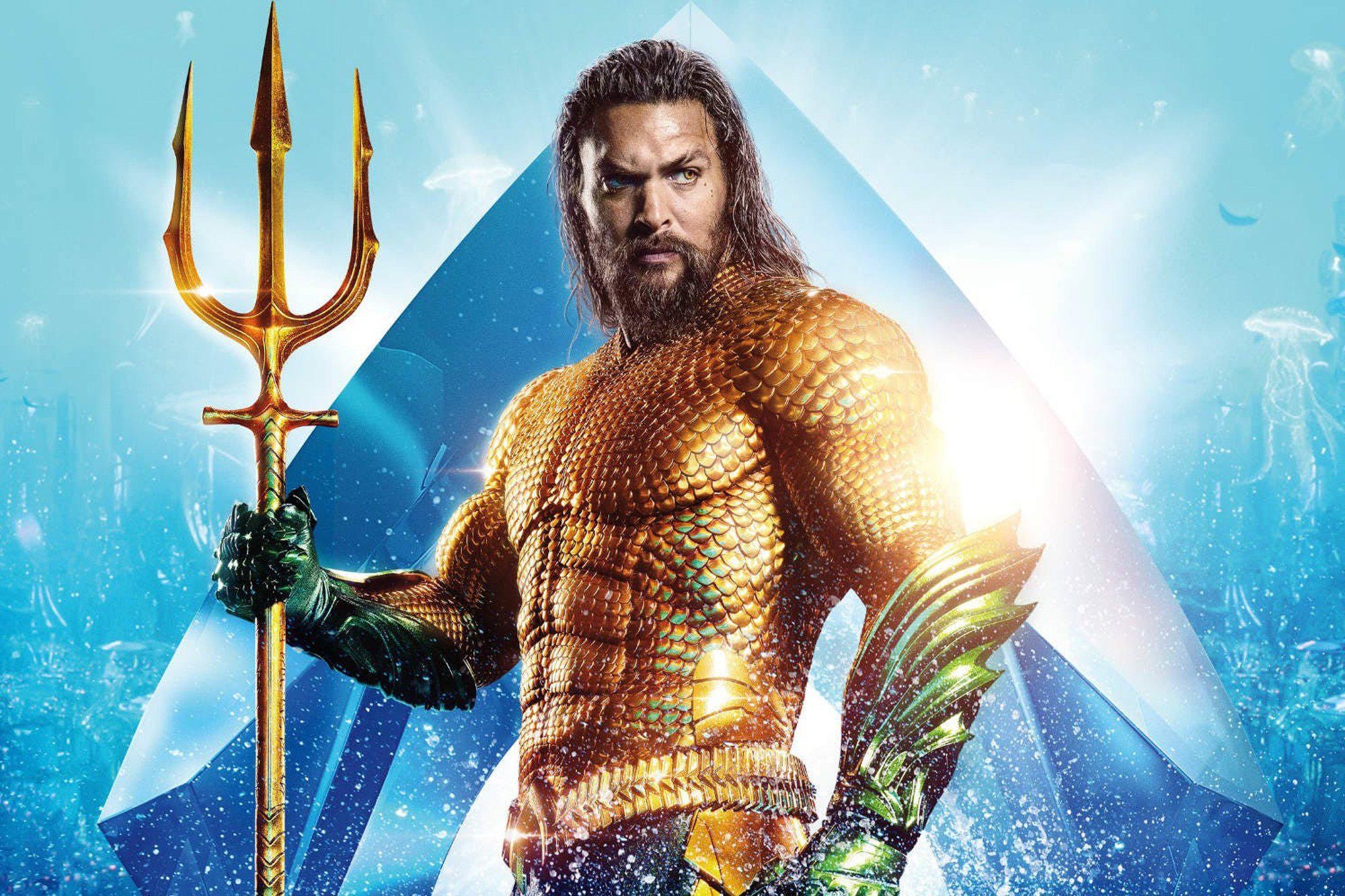 This is the progression of my poster: I added more elements into the composition such as the rocks in the background to form the impression of an underwater reef.

After settling the compositions for my poster, I moved on to creating my other collaterals. 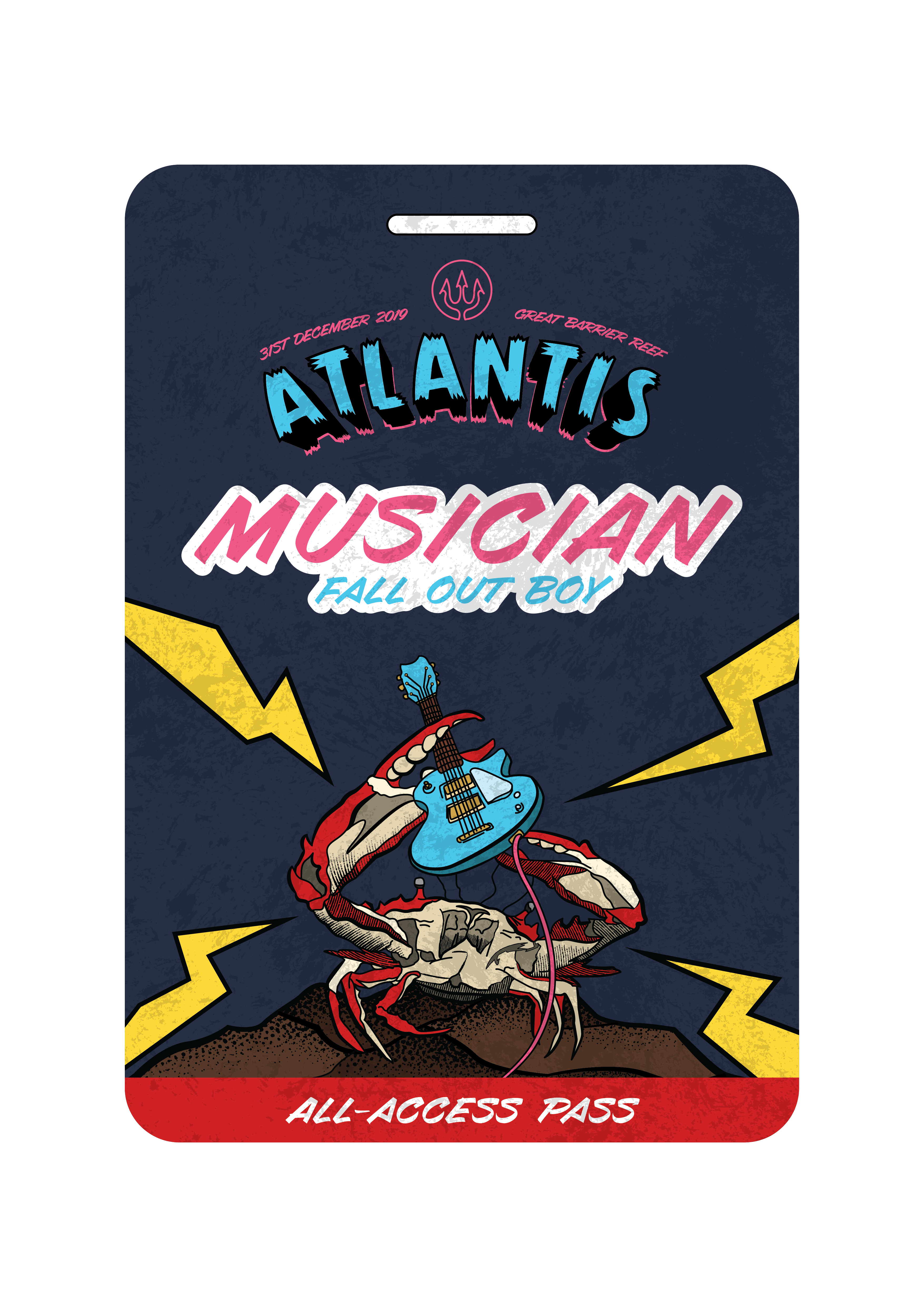 Here we have a stage pass meant for the musicians, I used the Signature crab to illustrate them being the hero in the concerts.

This is an energy drink infused with alcohol to give that extra jolt of energy to continue rocking through the night!

The essential ticket stub for entry to the music festival. 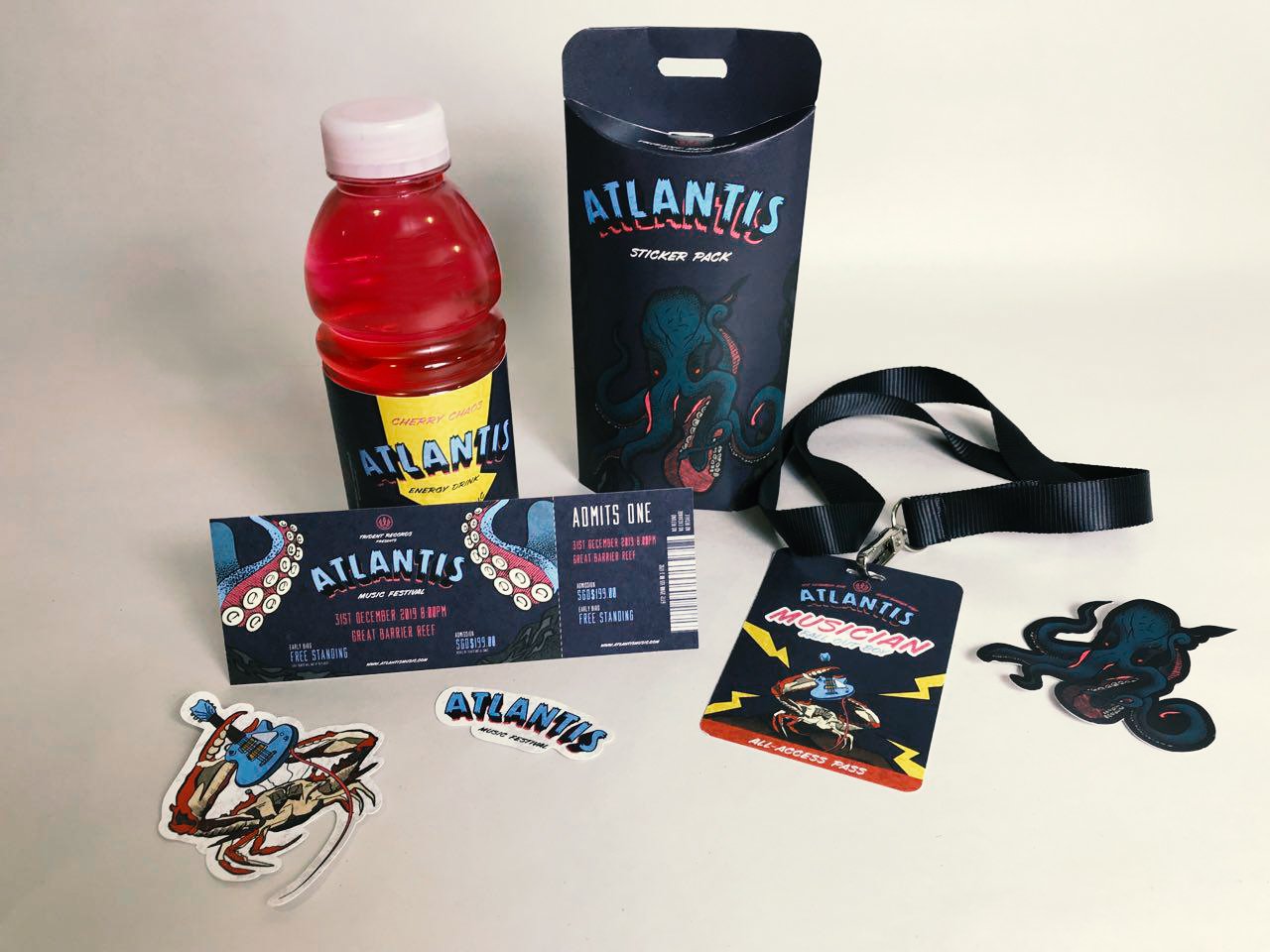 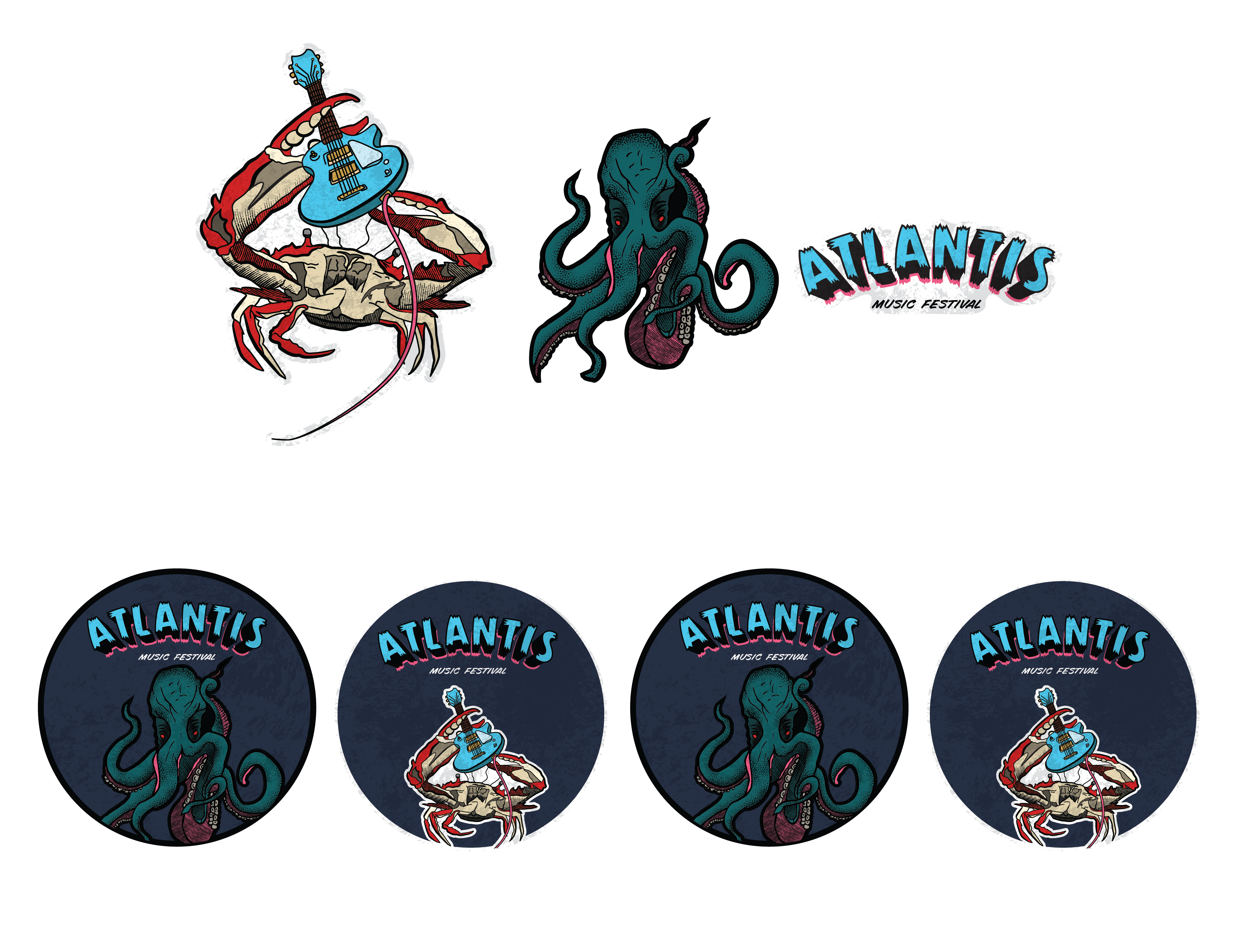 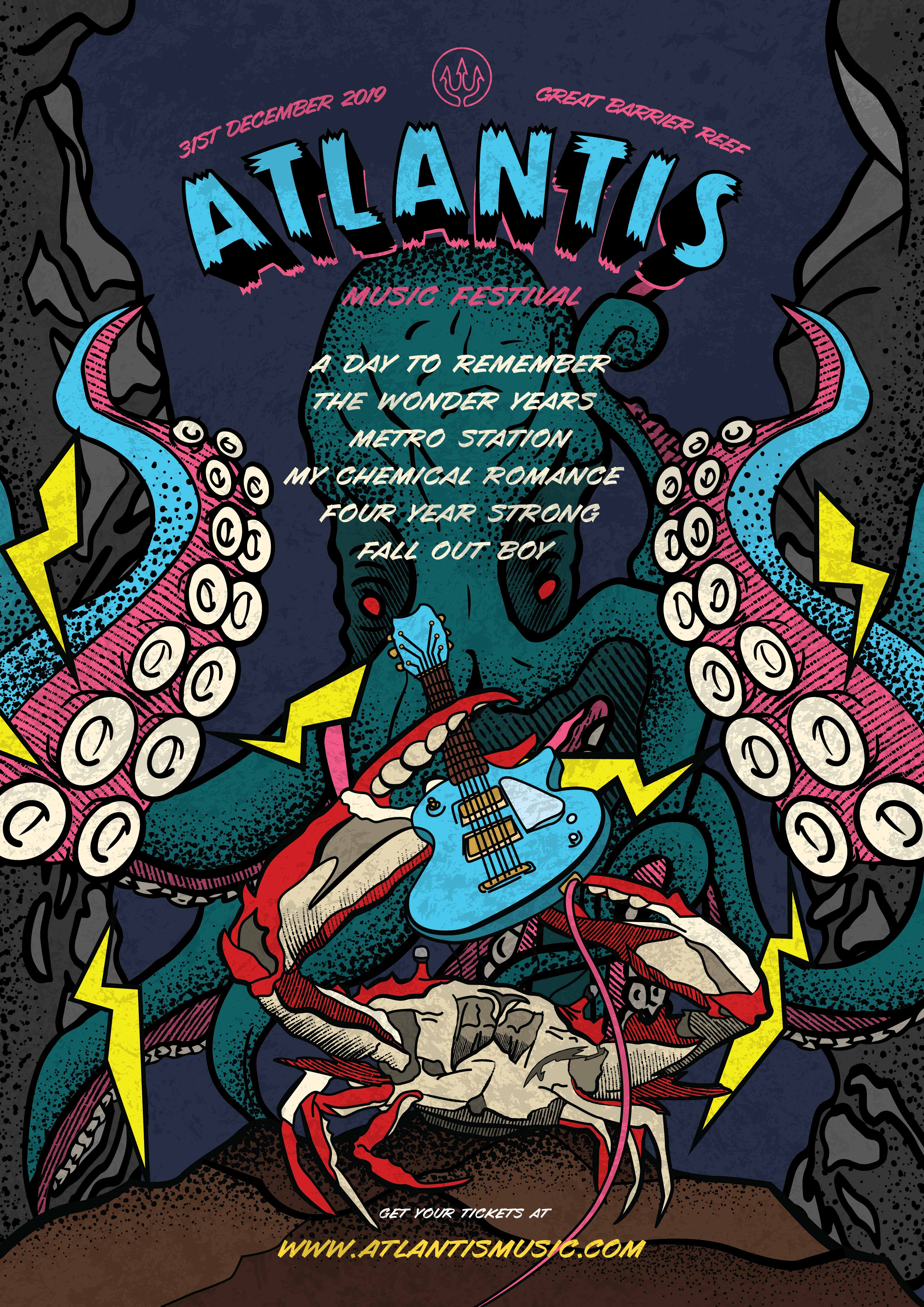