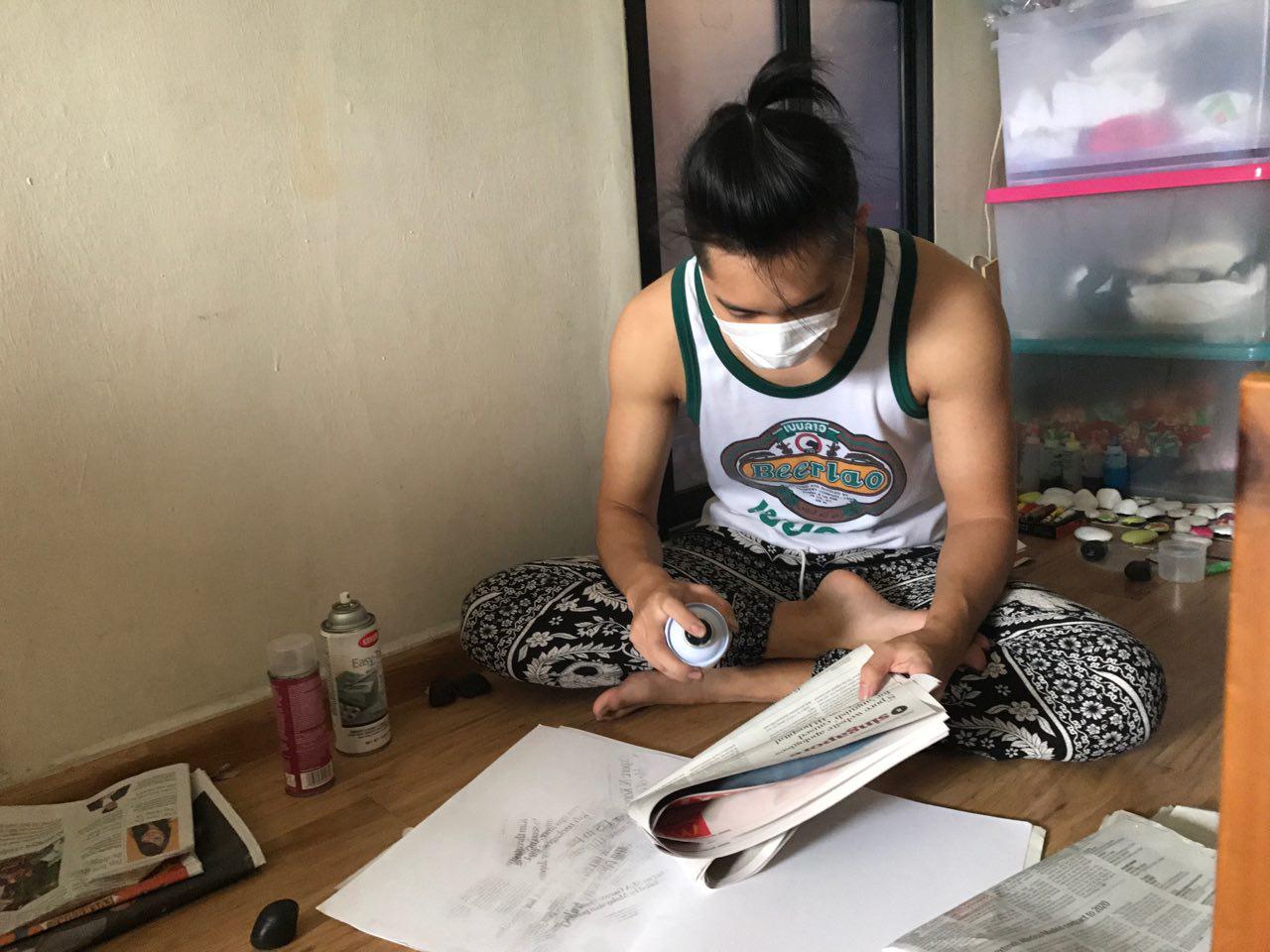 With the seemingly infinite ways of printmaking, I should start off with one of the most basic ones. Stamping using a piece of linoleum. I enjoy the process of etching out designs from linoleum which is why I decided to start with it first.

These are linoleum prints I made during the process of My Line is Emo. 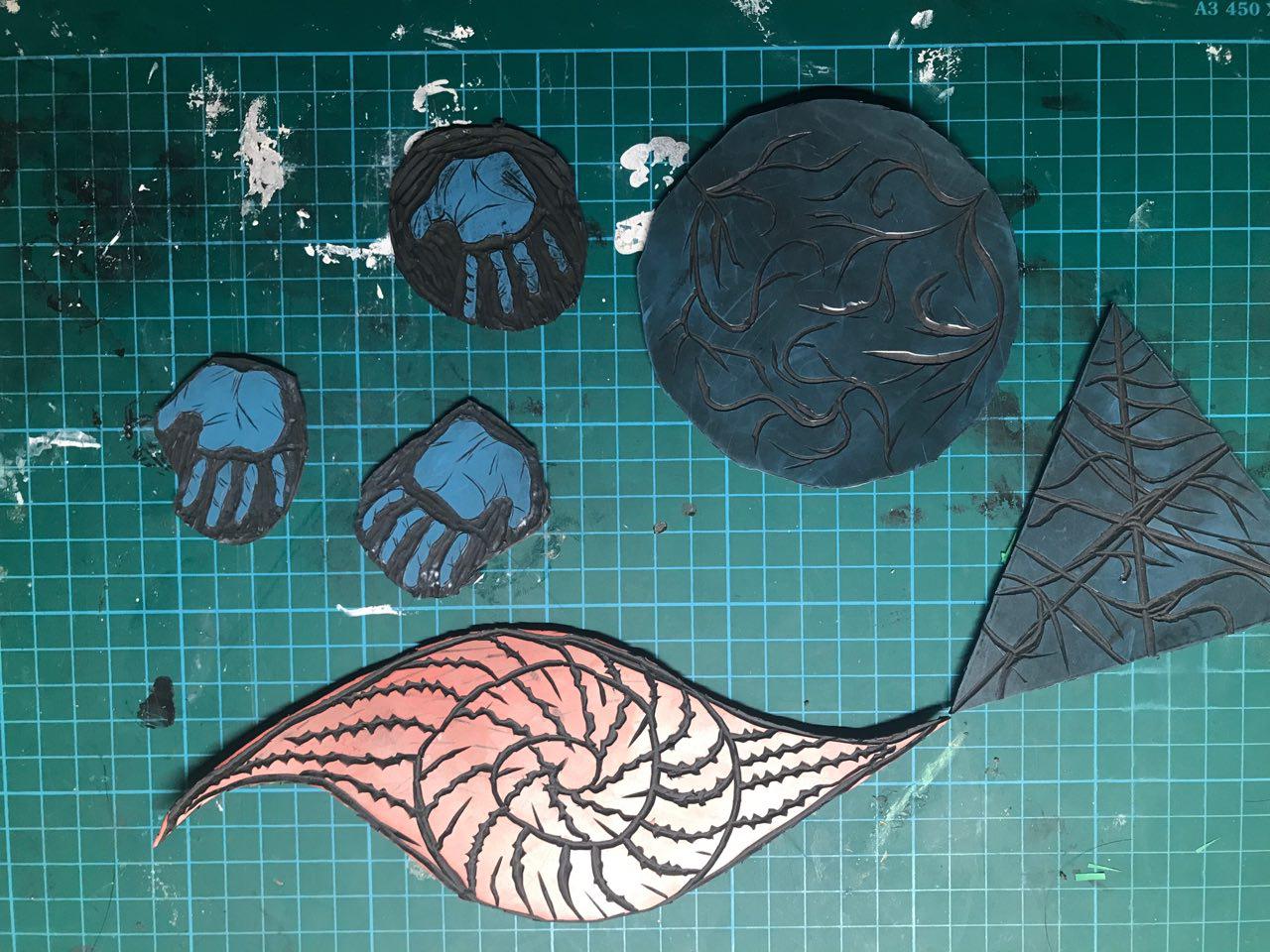 I chose not to use the larger pieces as I felt that they were too flat and they do not evoke the emotions which I want to express. The problem with using a linocut is that sometimes the print may turn out too be too literal or suggestive which is not recommended when working on an abstract piece.

I decided to cut out small hands to make it seem as though a child had made these prints. I wanted to show details of the palm and fingers to make it more lifelike and have that human touch. Similar to what artist Marcus Harvey did during his exhibition called Sensation where he used prints of children’s hands to create a portrait of a serial child murderer.

However, I decided to incorporate more elements into this piece instead of making it just one print as what my lecturer suggested. This in turn, transformed my print into a more dynamic one, showing more emotions and expressions. I juxtaposed black and white paint, while also using different print mediums such as balls to create a contrasting background to give it depth. The acrylic would signify a mess created on a tabletop, similar to how my dining table would look like after I played with my food…. 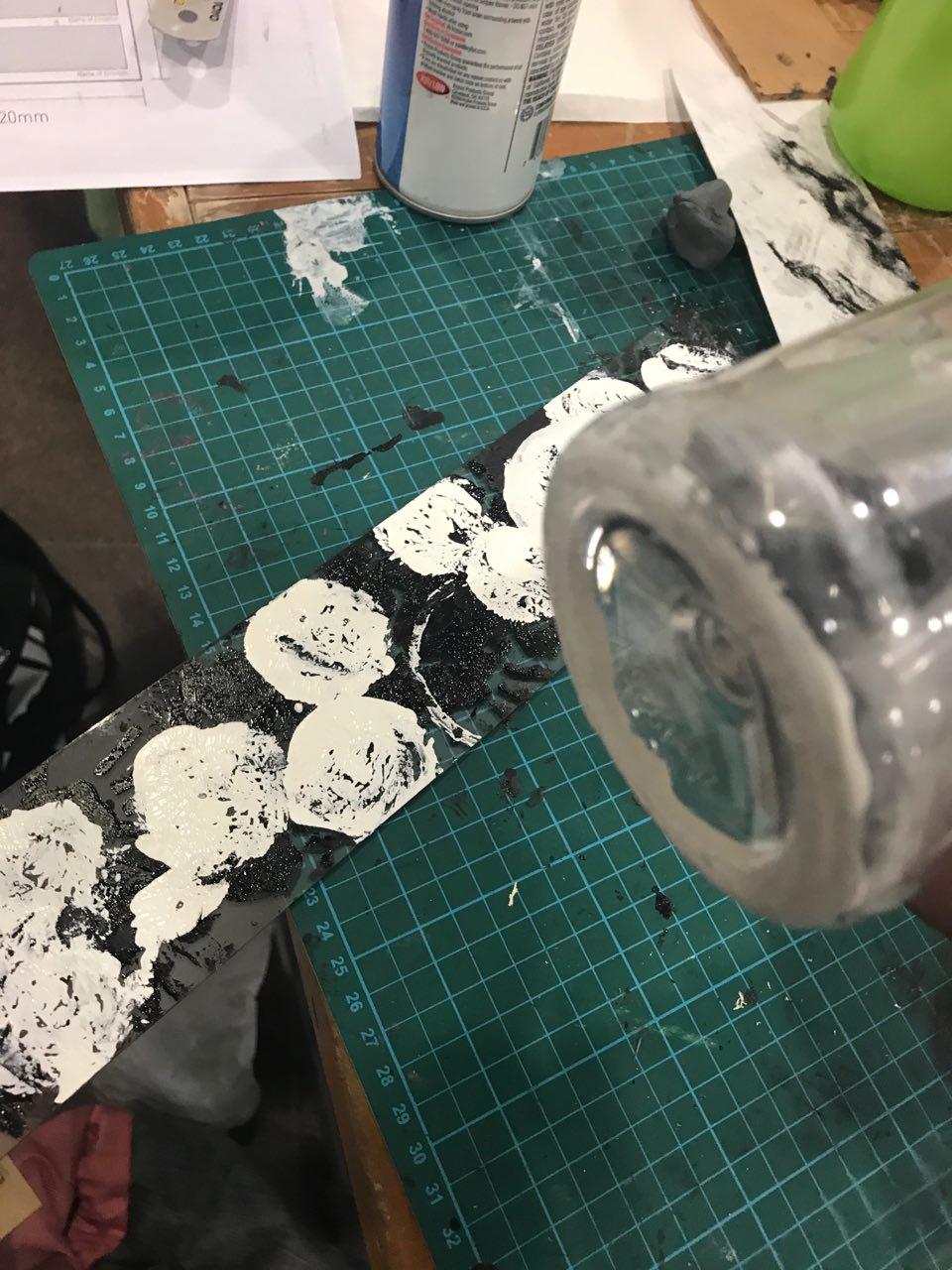 On the topic of using balls, I ventured into the idea of using them more as I feel that balls have the ability to evoke multiple emotions in people! Some find joy and excitement in balls, while others may find fear in it and in certain situations, surprise! For me, depending on the ball, I would mostly feel excitement and joy from balls because I relate it to physical activities and games.

I experimented with balls to see what type of expressions and emotions I would get out of the prints. I found out that the emotion of surprise showed well through my prints. For these prints, I put a couple of drops of paint onto a sheet of paper and threw a ball at the paper, creating a splash effect. My mother wasn’t a fan of this method as it created more of a mess than any other print techniques. 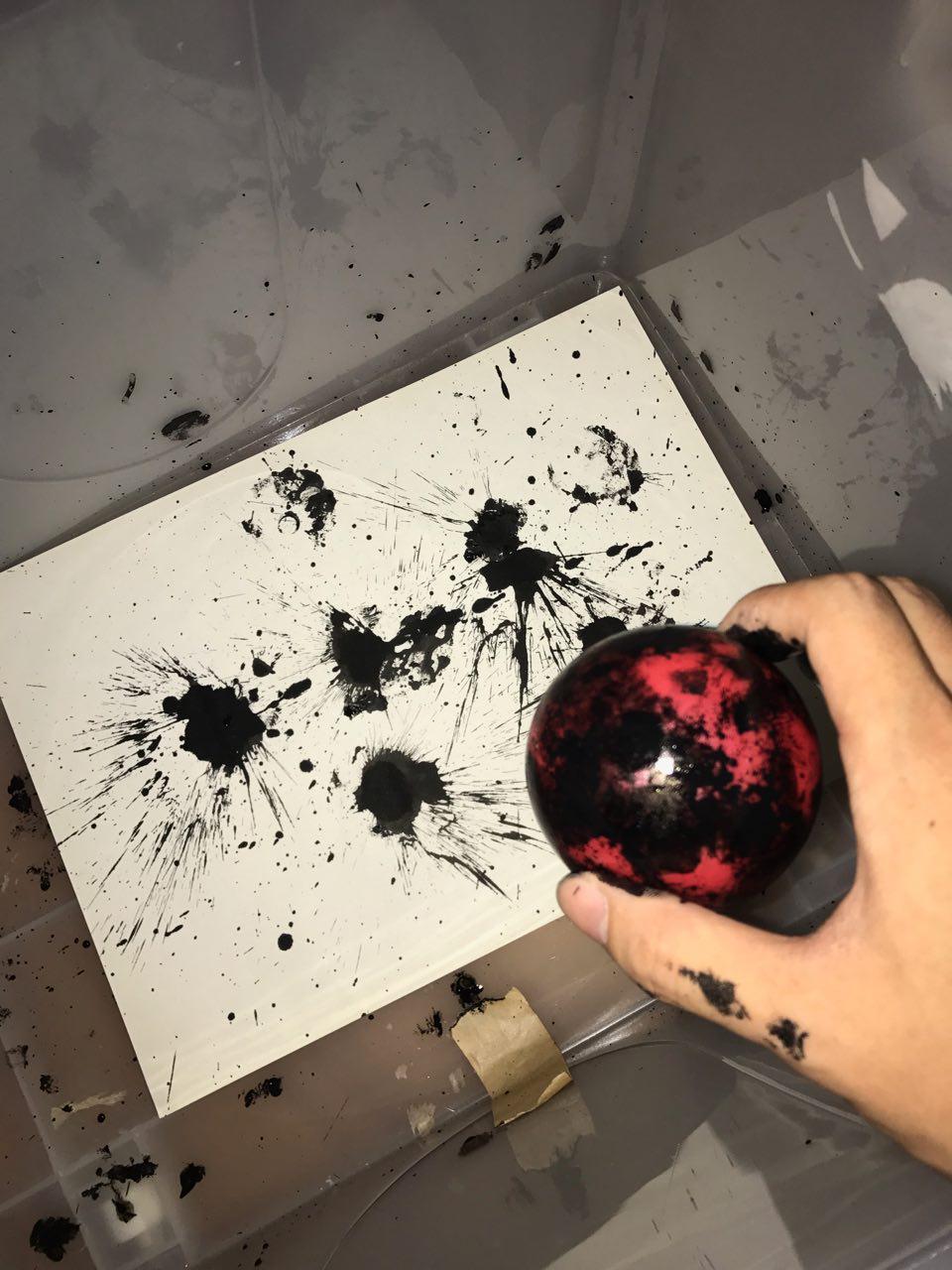 However, I was not able to get such an effect immediately. I initially had trouble getting the ink to splatter because I used paint. This ‘failure’ is more apparent when i used white paint. 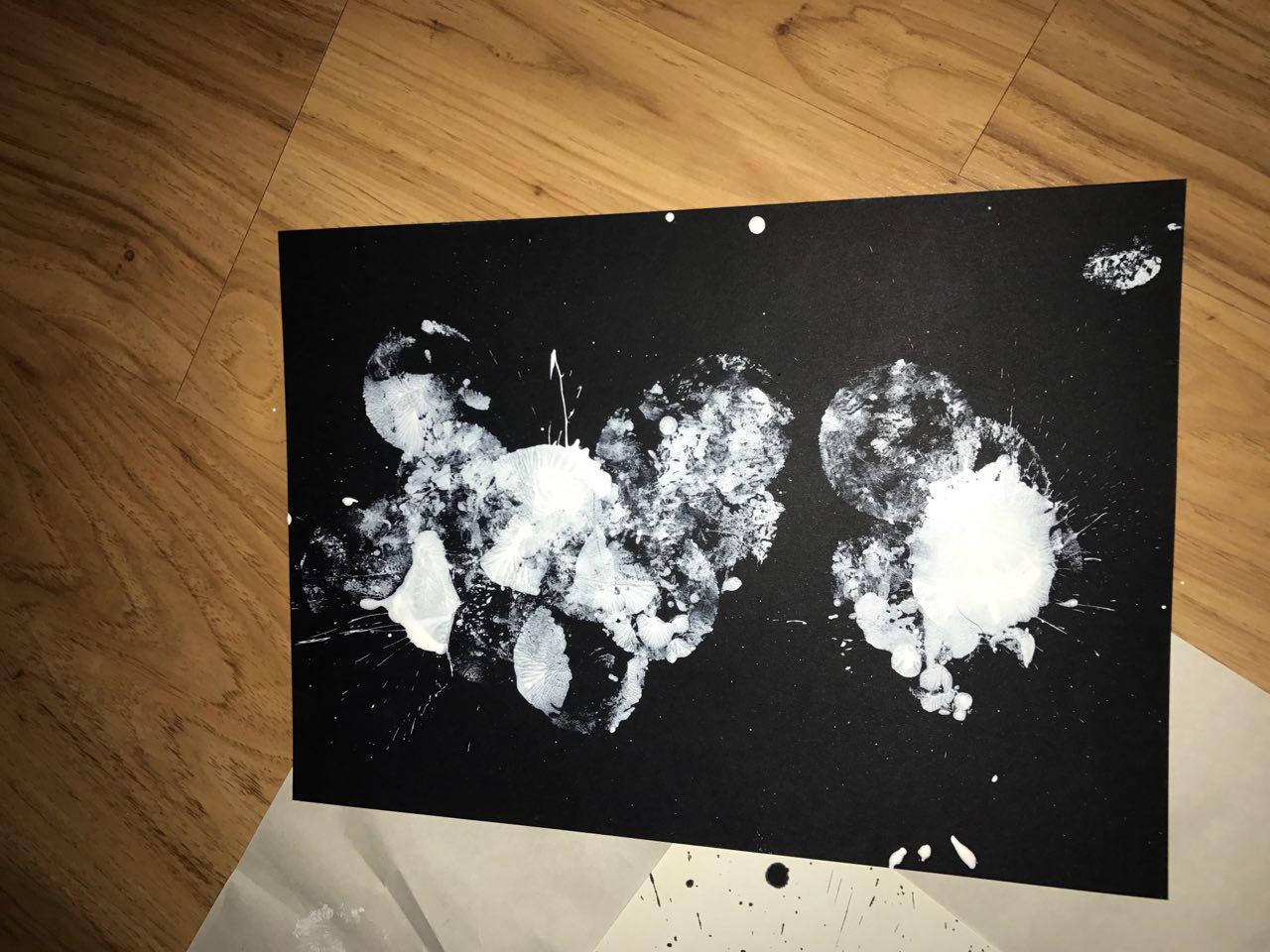 I feel that even thought the paint did not splatter, it still created an interesting print. One where you are able to make out the medium and also get a mysterious feeling from it. In some ways, the images look like moons colliding.

Speaking of cleaning up, I used cloth as a medium as well. Using cloth was exciting because I did not know what the results would be like. Cloth is vastly different from paper as it is absorbent and it can be twisted and wrinkled unlike paper which would end up tearing. This made cloth a very resilient material. This allowed me to explore various methods of tie dye.

One method that caught my eye was the Diamond Pattern Folded Tie Dye Technique from http://www.bystephanielynn.com/2015/06/tie-dye-folding-techniques-16-vibrant-tie-dye-patterns-tiedyeyoursummer.html this technique folded cloth similar to how we store plastic bags. After folding it like a plastic bag, you would then proceed to secure it with rubber bands and apply dye to the shirt at specific corners.

I was pleased with the outcome of the shirt, however, I felt that it was too linear and inorganic for my liking.

I tried other methods of tie dying as well, for another method, began to swirl the cloth and I then proceeded to add ink onto it. The results for this method was hit or miss as some turned out ideal while others look too scattered. 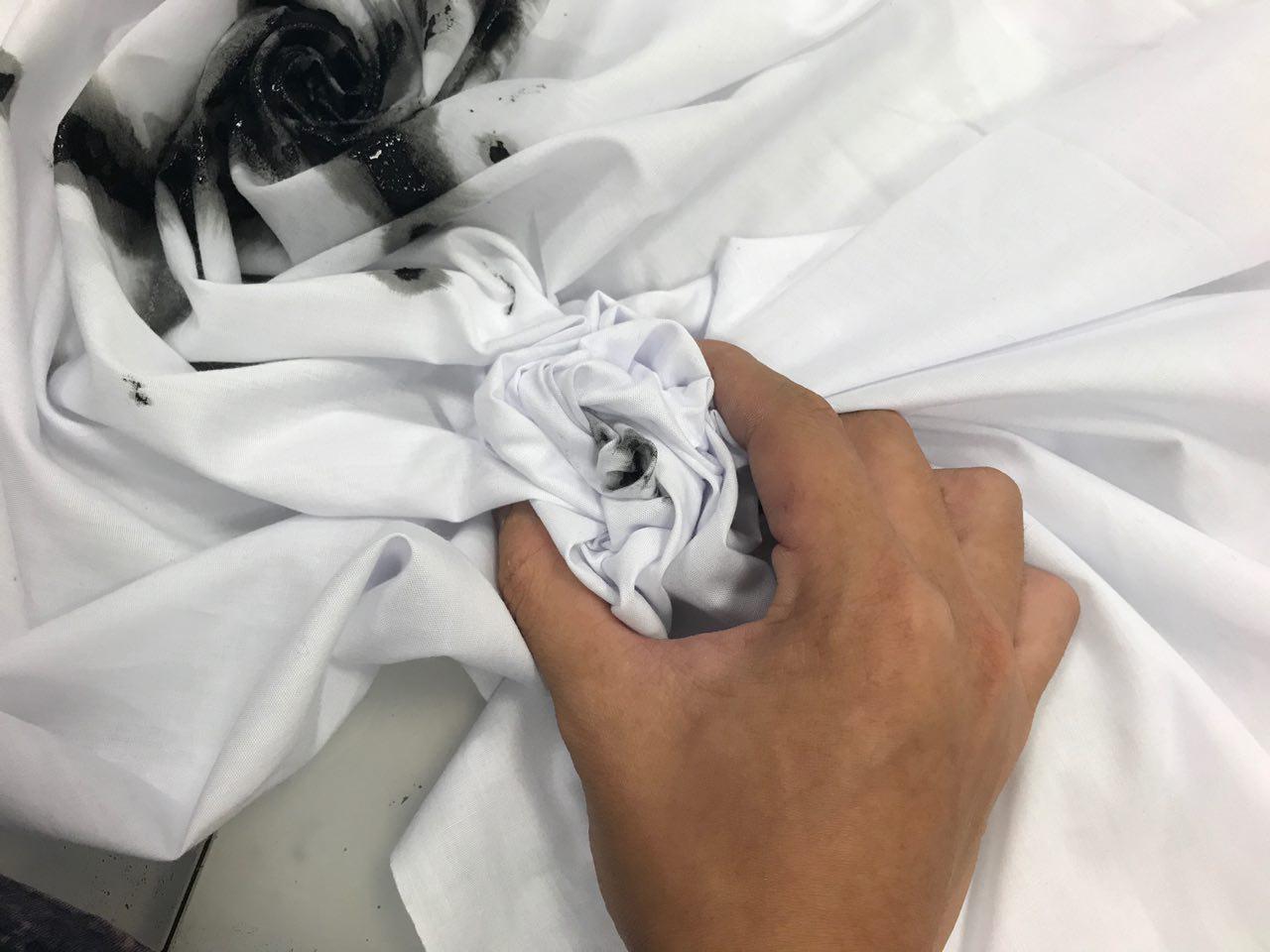 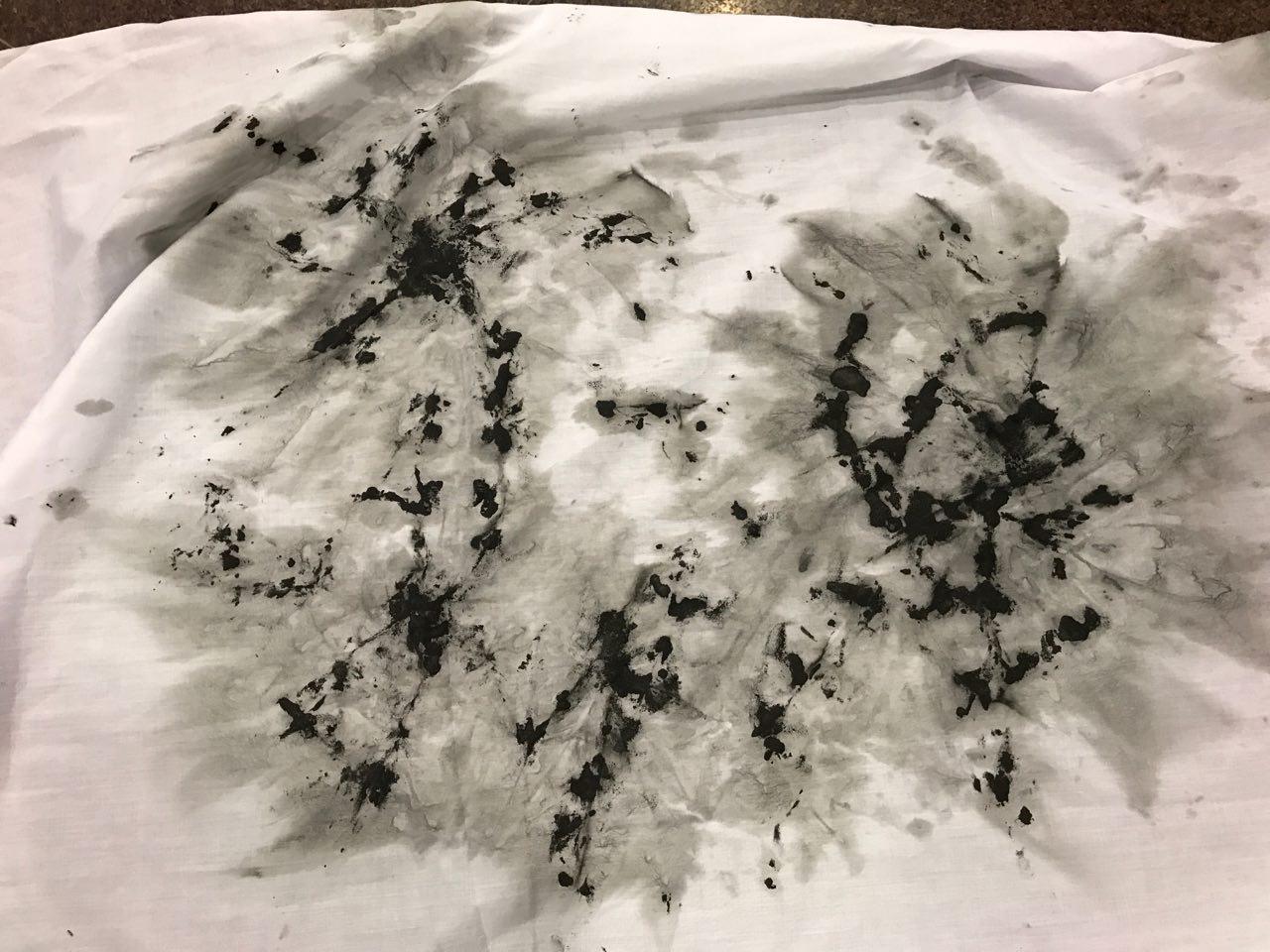 The next technique I used was more straightforward, this method involved just adding ink to cloth and applying water to the cloth so that the ink is able to be smudged. However,  I felt that it did not show enough versatility of paper as I felt that the same thing could be emulated with paper. 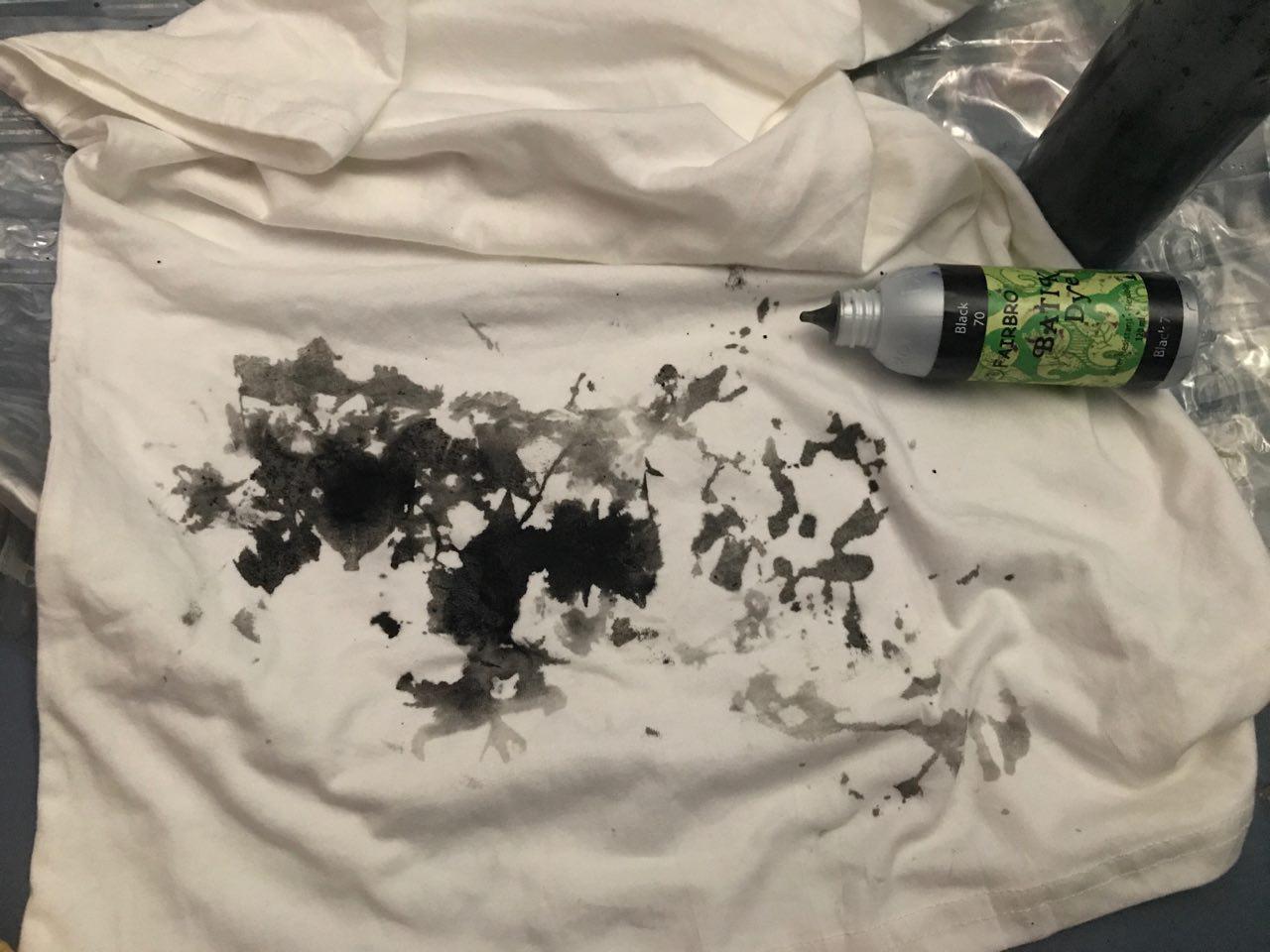 To me, cloth is something which is reliable and resilient. I feel that cloth is often used to clean up a mess or tears when someone is sad. Cloth is able to hold emotions well which makes it resilient in times of need. Therefore, I would relate these prints to sadness.

Another absorbent material i experimented with was bread. Bread has become a staple in my diet as I have constantly been eating it for breakfast ever since I entered university as I do not have the luxury of making breakfast in the morning anymore.

Bread was an interesting medium to work with as there were many variations of prints i could get from it. From the crust to the flesh, everything can be used and the results would still amaze me. 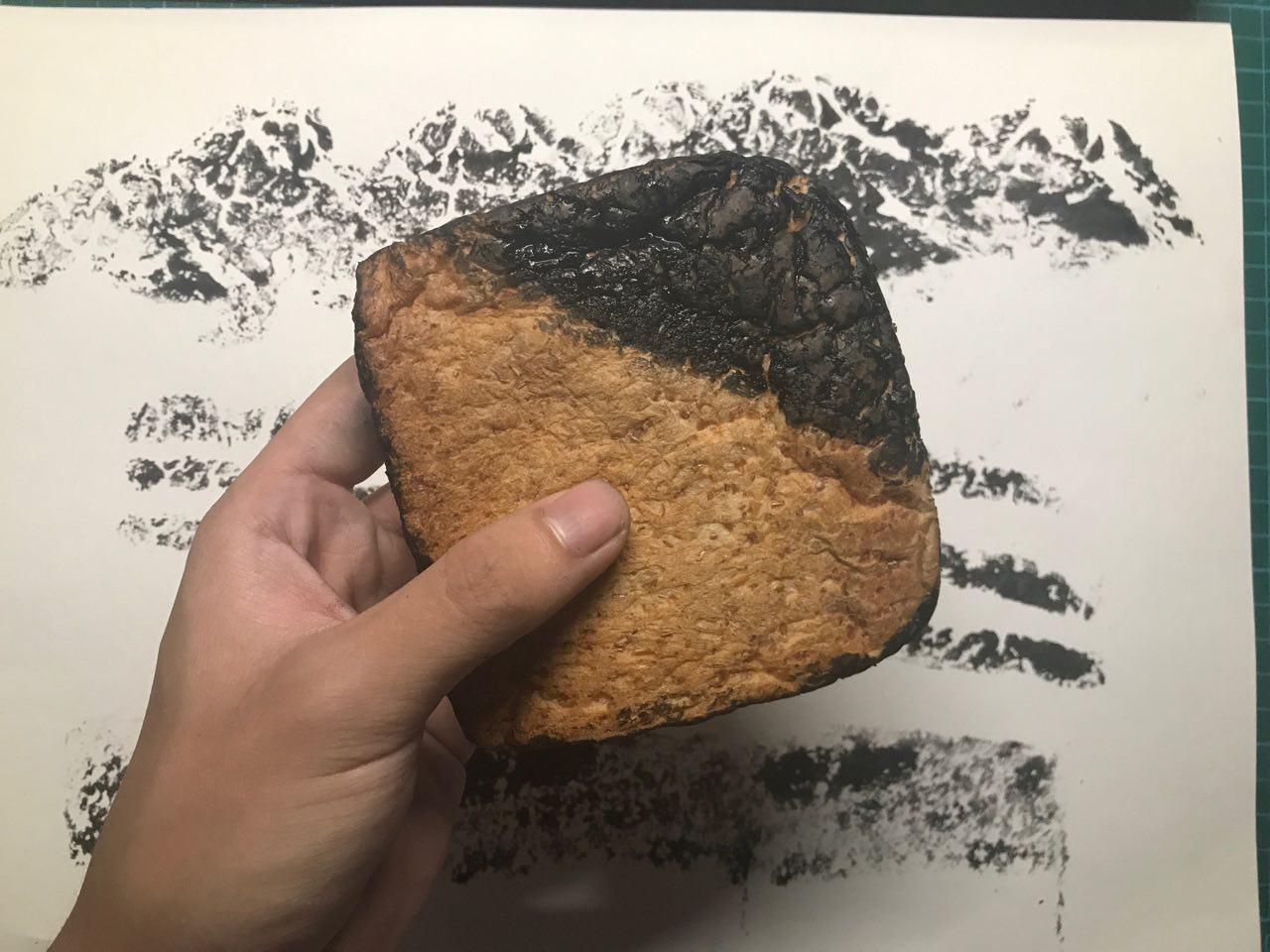 In my journal, I showed the various types of prints I was able to get from just using bread!

I started to think of the emotion of Fear and what it does to our minds. Fear is an overwhelming emotion which can rarely be controlled. Fear restricts us and holds us down, preventing us from ever trying certain activities. The main inspiration from which i drew fear from was chains or ropes as they weigh us down. This resulted in me looking for suitable materials to use to emulate the print of chains. I experimented with various types of ropes and strings and found out that cables work the best.

Initially, I placed paint on the cable and tried to imprint it onto the paper. However, I ended up with a very dull and flat print which i did not want to use. I also had to learn how to braid hair to use it on cables! (Time to impress girls!) This helped me get more of the crossing effect of the cables as well as more depth. 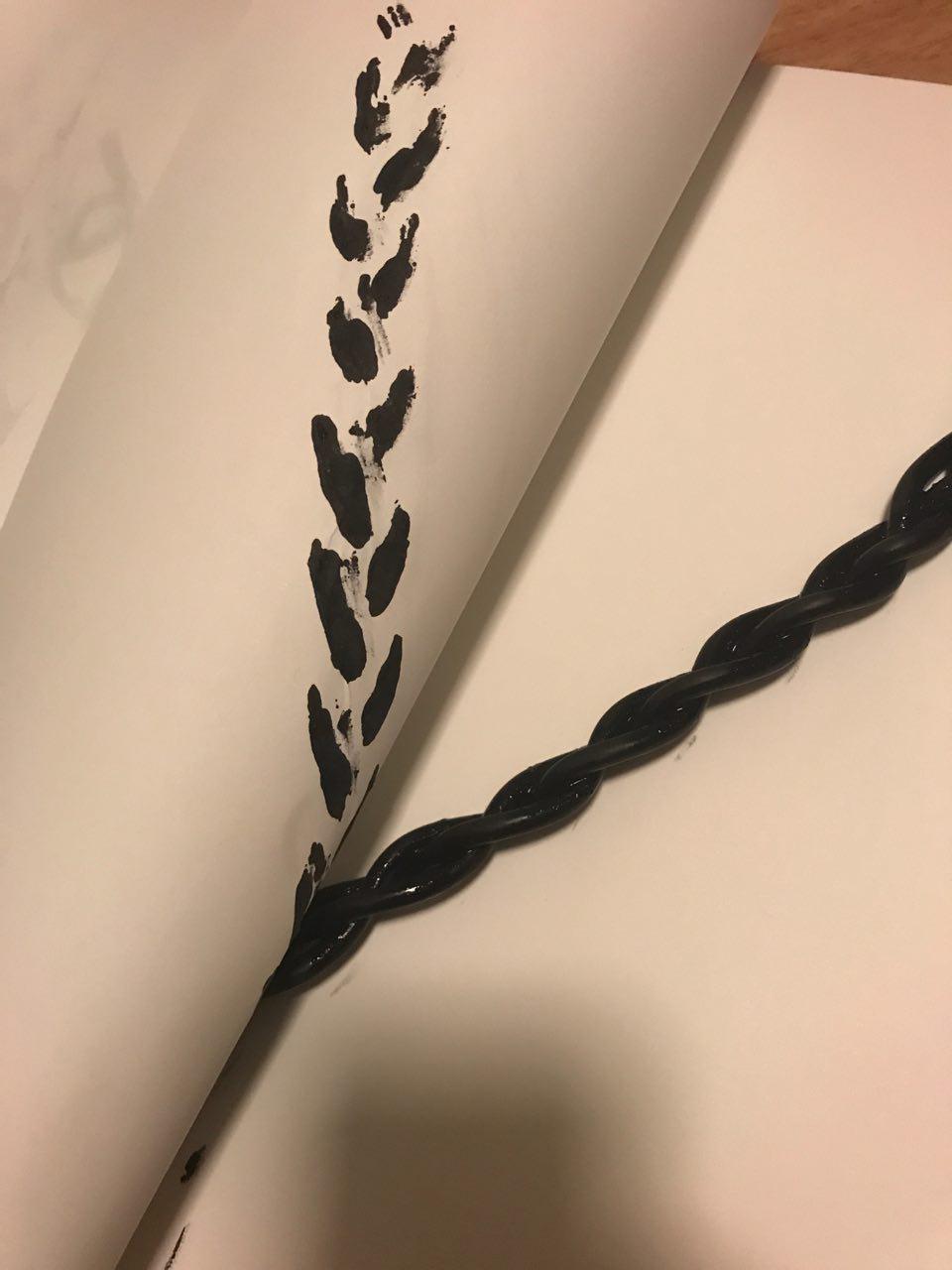 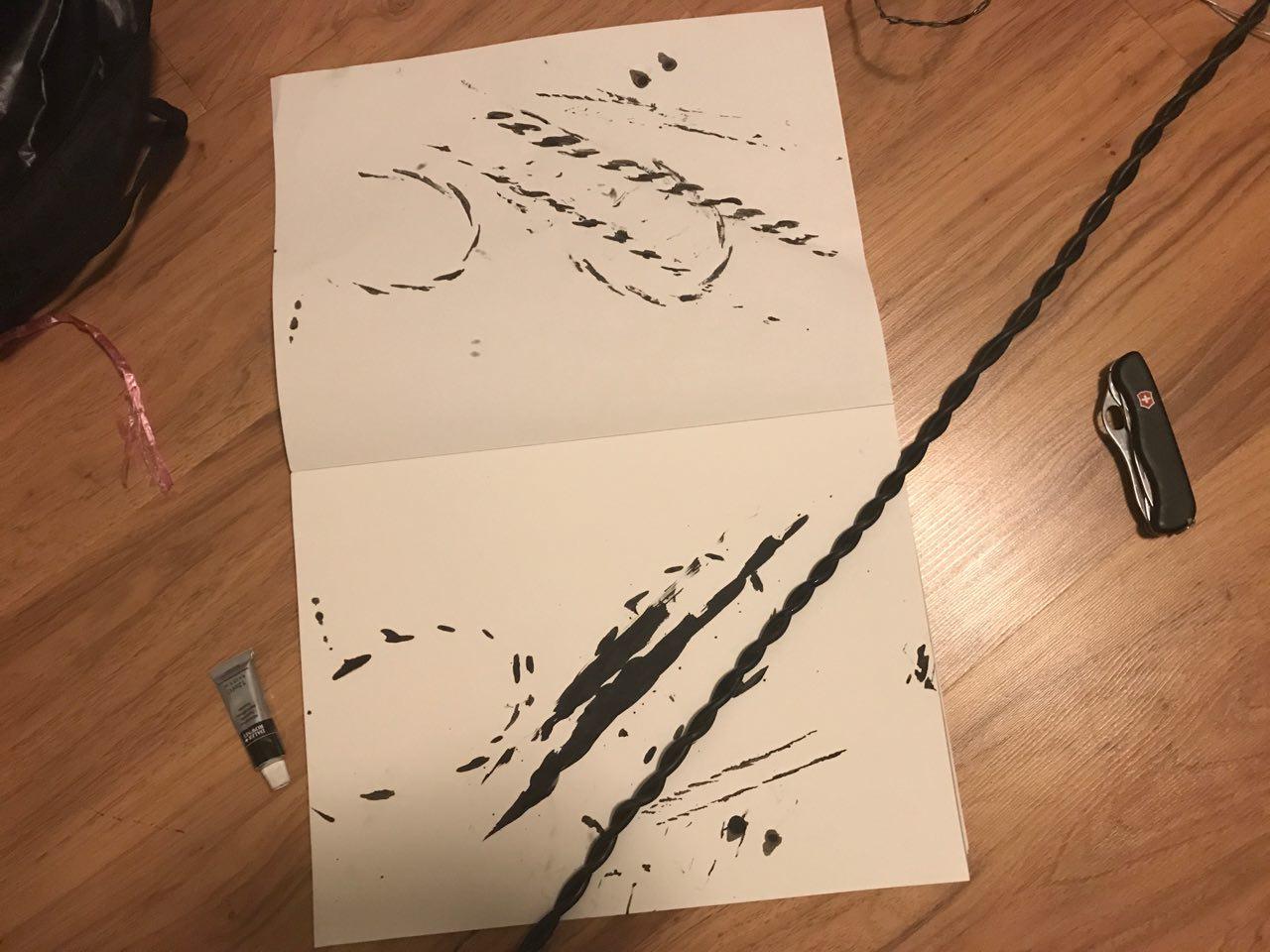 I came up with an effect with more depth and detail from this method of printing which excite me. 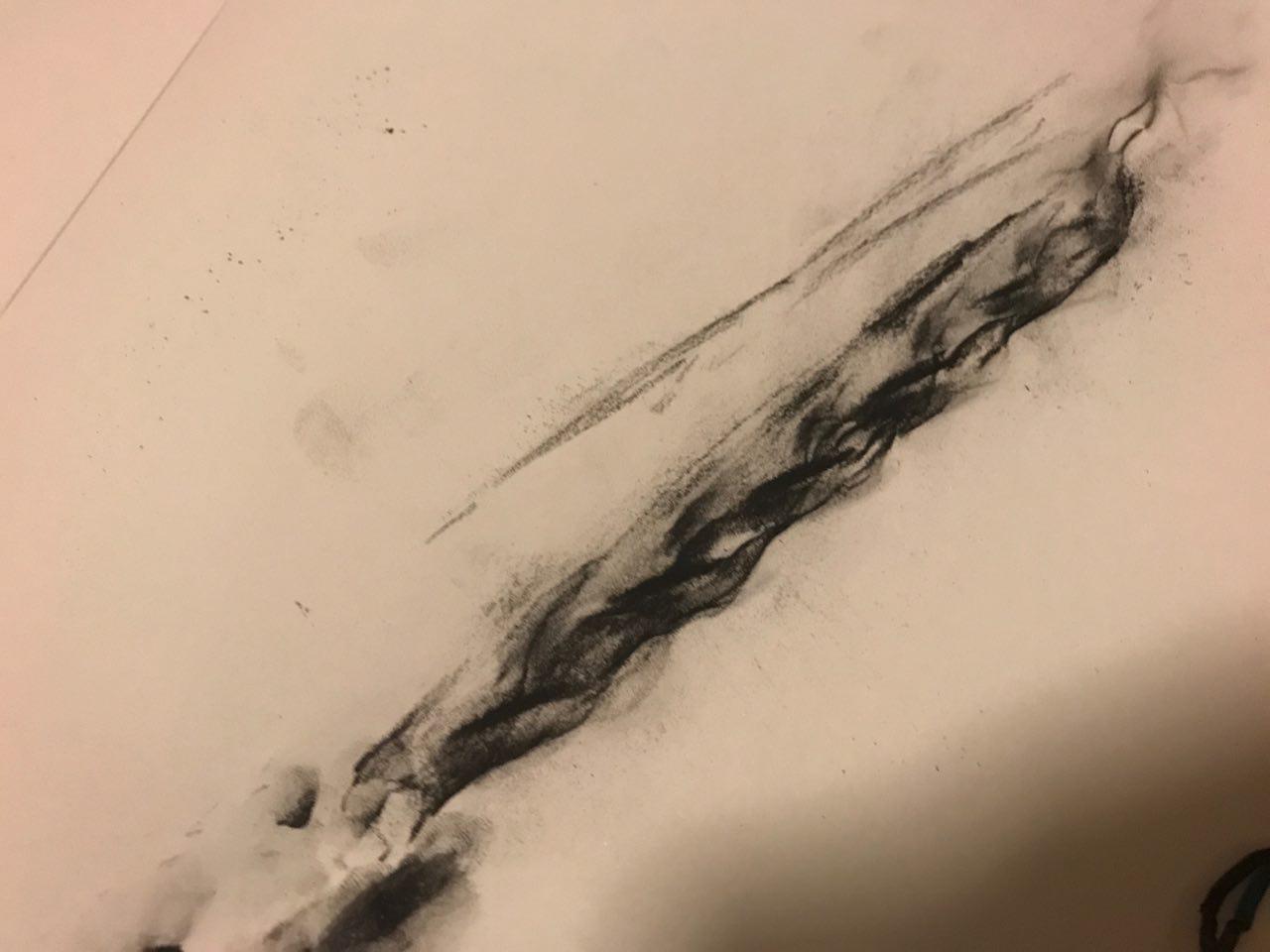 I had to practice a many more times before i could get such a clean and defined line as this one. (my best one yet) 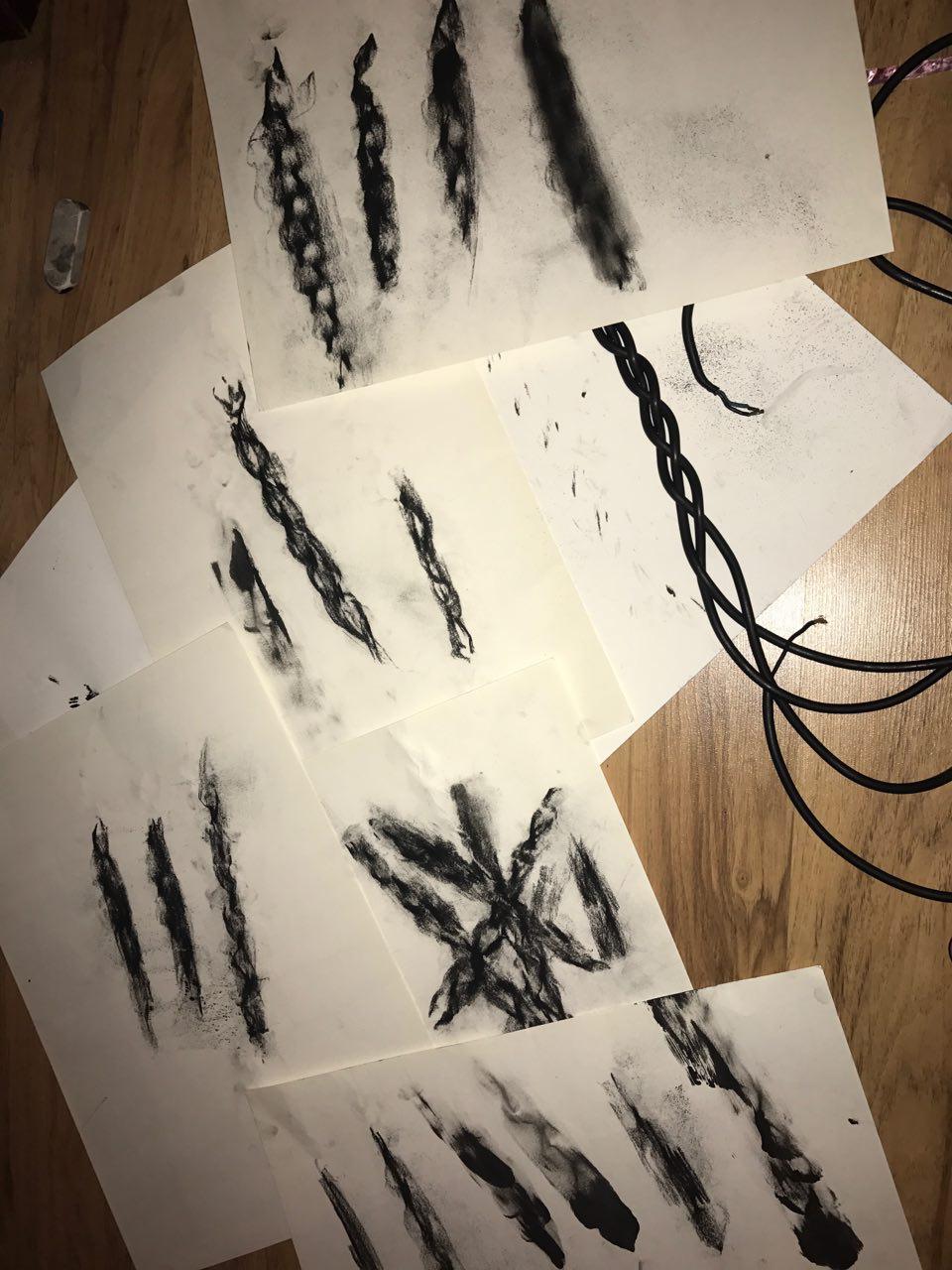 I was at the supermarket looking for materials which I could further use for mark making which is when i stumbled upon the sponge like material used to protect fruits. I was inspired by artist Tara Donovan as she used common everyday items to create large scale instillation. Her projects also has a certain flow to them which was what I wanted to emulate in my work.

First, I coated the object in ink before pressing it onto a sheet of paper. This was the result: 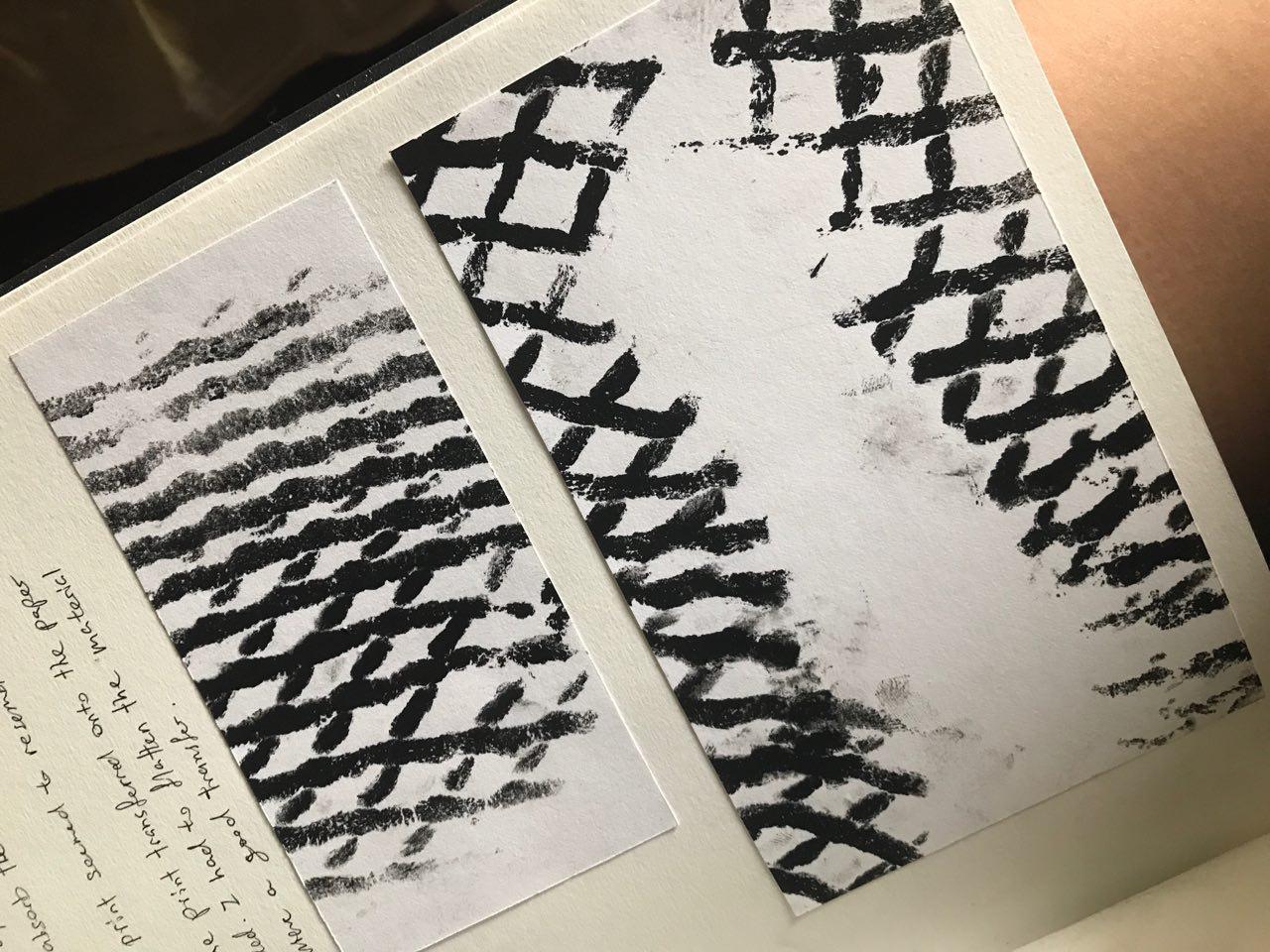 I layered the material over paper and I sprayed Scotch Spray mount over, followed by sprinkling flour over the paper. I wanted the negative spaces to be filled with flour. It took me several tries to get the outcome I wanted. 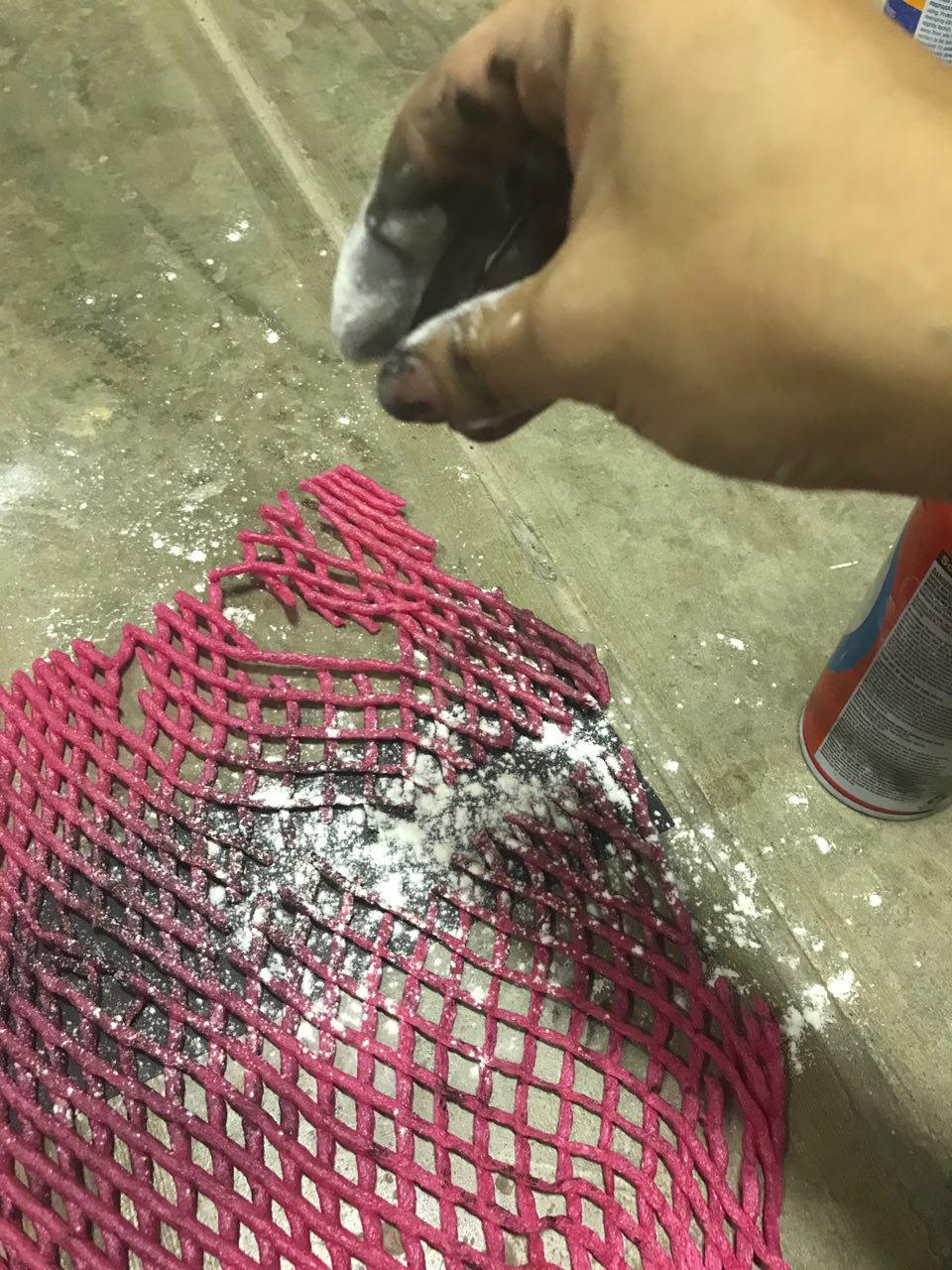 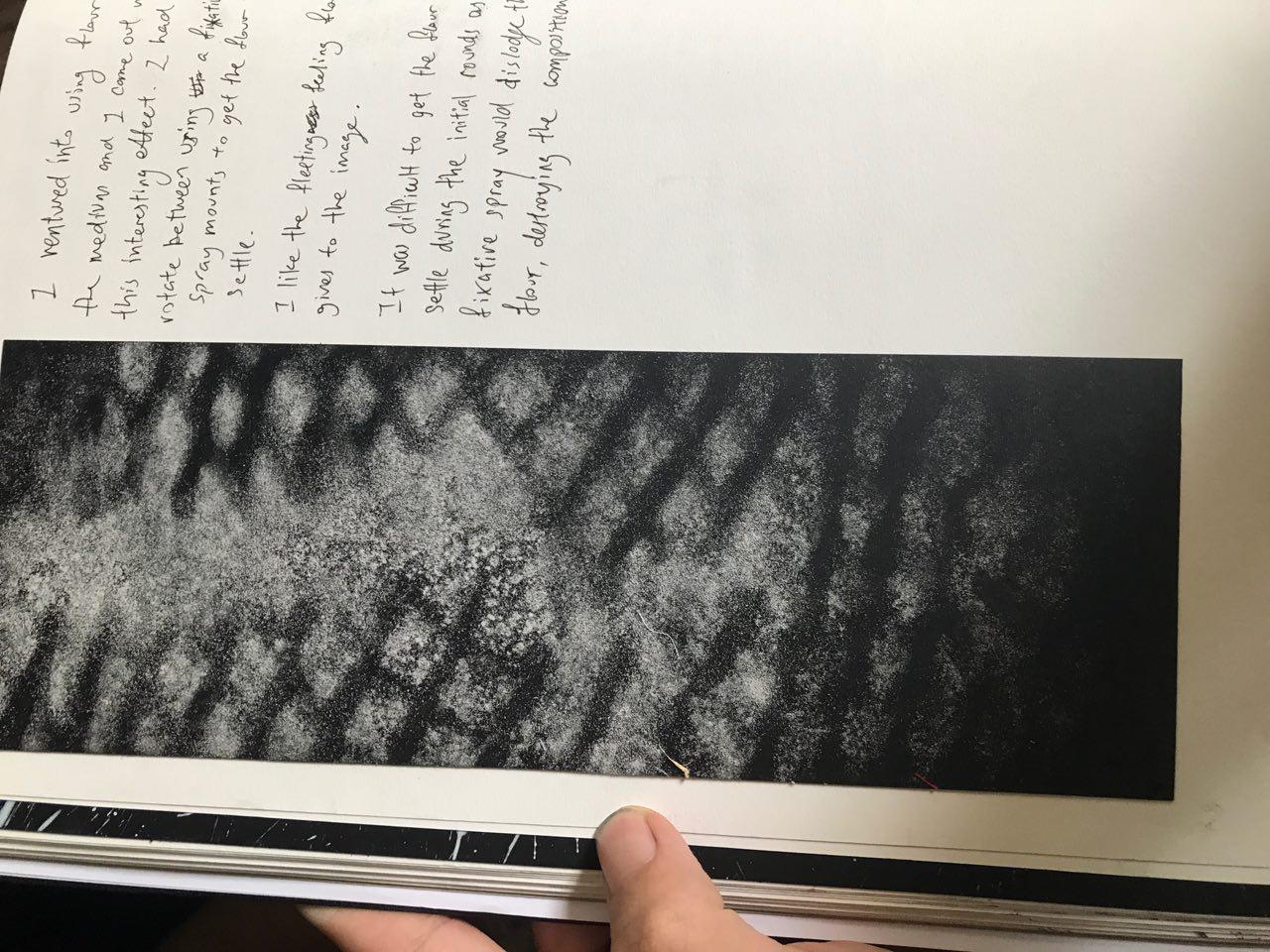 I realised that the coat of flour was not thick enough, which prompted me to use a combination of fixative as well as spray mount to ensure that the flour particles do not get dislodged during the process. 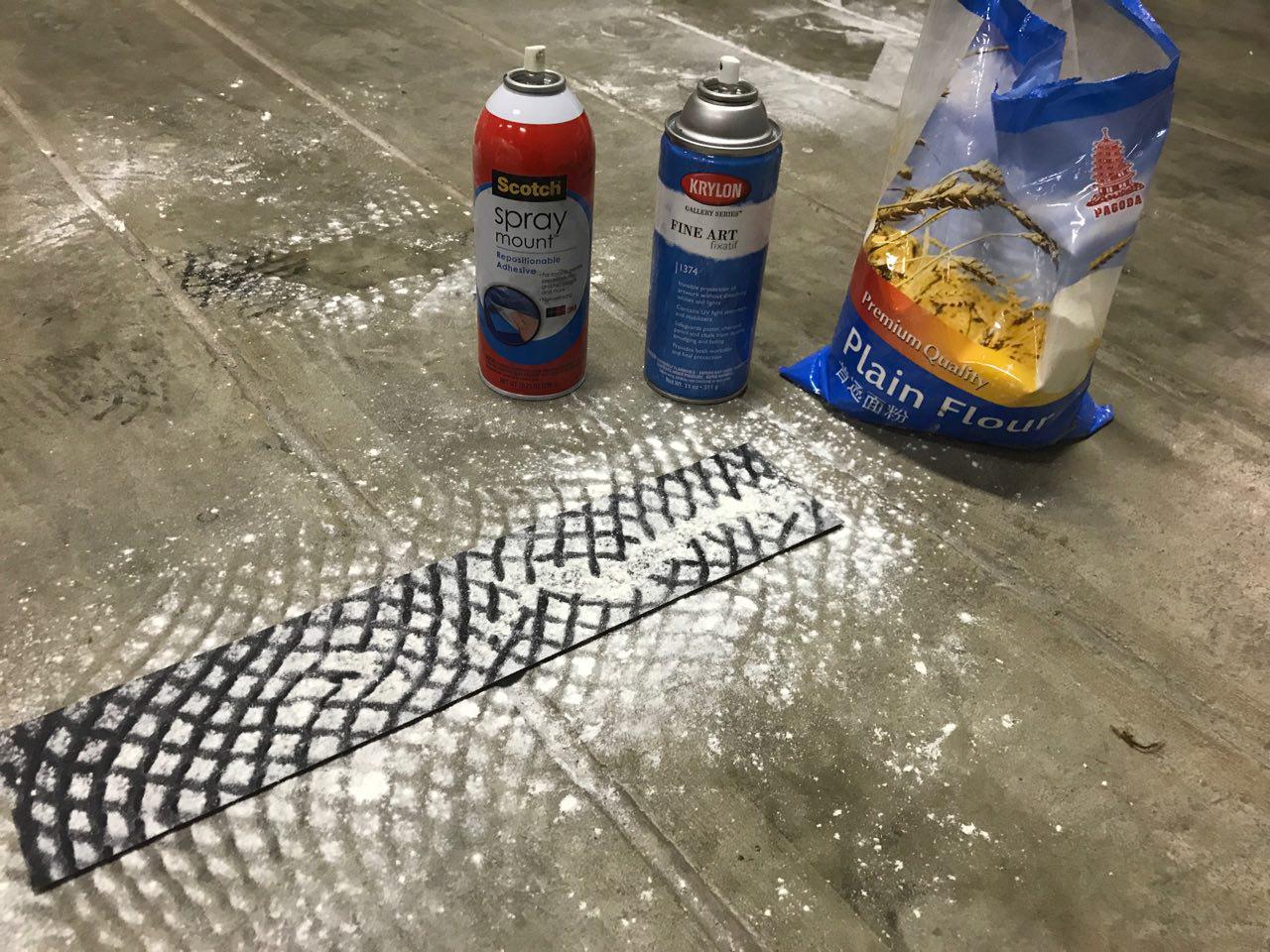 It turned out well!

This is her work using disposable cups:

Marcus Harvey, this artist is famously known for his portrait titled Myra as he painted the portrait of a famous serial child killer known as Myra Hindley using prints of children’s hands. This portrait caused an out roar as people deemed it as the glorification of the serial killer.