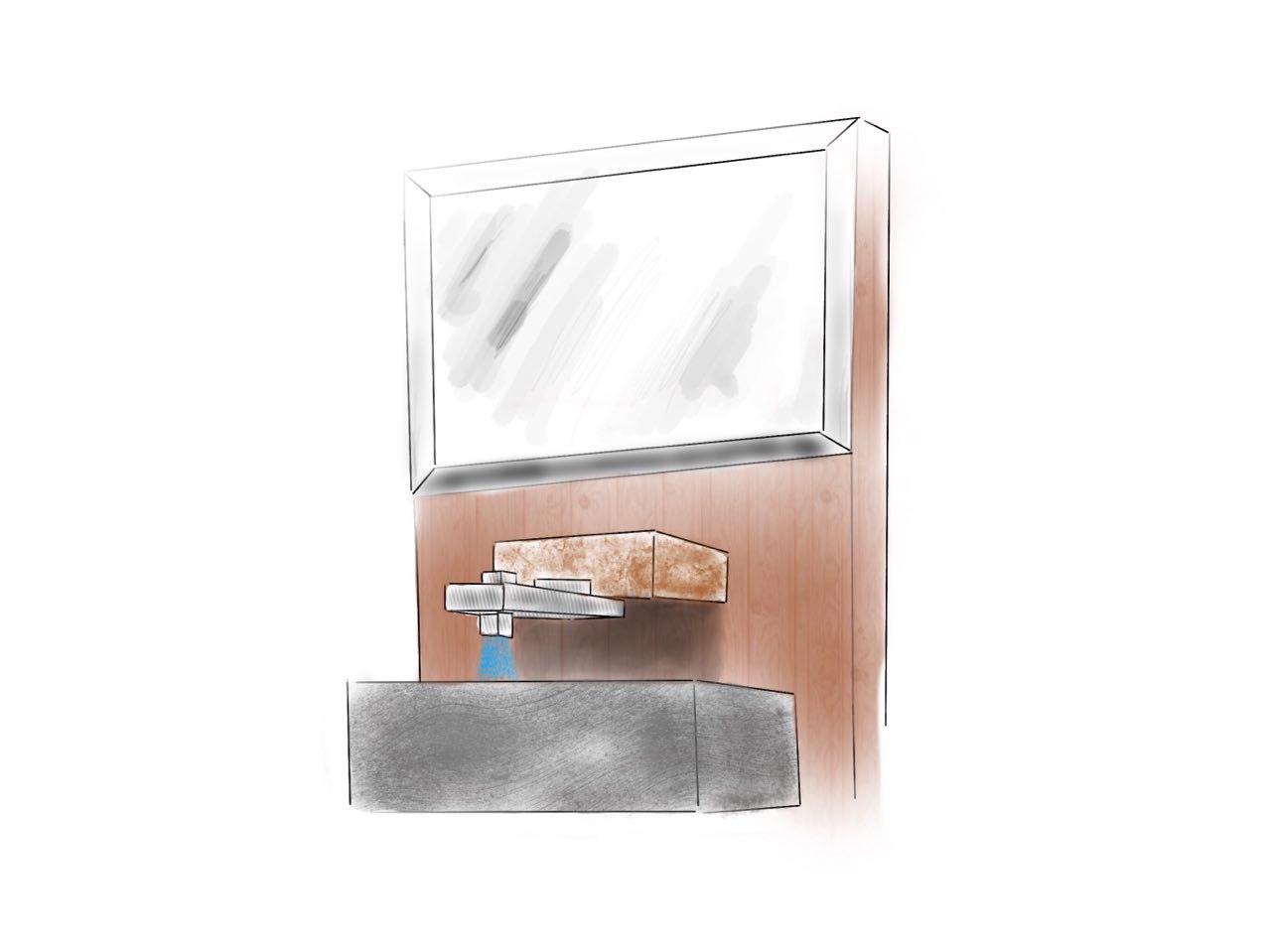 After week 4’s tutorial, I had to source for blocks to form my 2 models. I decided to go with 2 models which parts can be interchangeable and reusable. This was influenced by Lego and also because I didn’t not want to waste my foam blocks. Because the blocks had to be interchangeable, I ensured that certain blocks from different models were of similar dimensions.  The two models revolve around a main block which also happens to be the SD.

I wanted to use acrylic for my blocks which would be closely related to Lego, however, the material would be difficult to carve and be precise without proper tools.

As a replacement, I wrapped my foam blocks in papers of basic colours to give it the representation of Lego as these blocks mostly come in basic colours.

As I wanted to make my pieces interchangeable, I had to precisely measure out the dimensions I wanted the groove to have. I was unable to take the process photos because I was too absorbed into the task at hand! But it all turned out well as the fit is really tight. I had to use a penknife to etch out the foam, little by little till I had a perfect fit. I made sure to remove more foam to make space for the paper when it would be wrapped around the blocks. 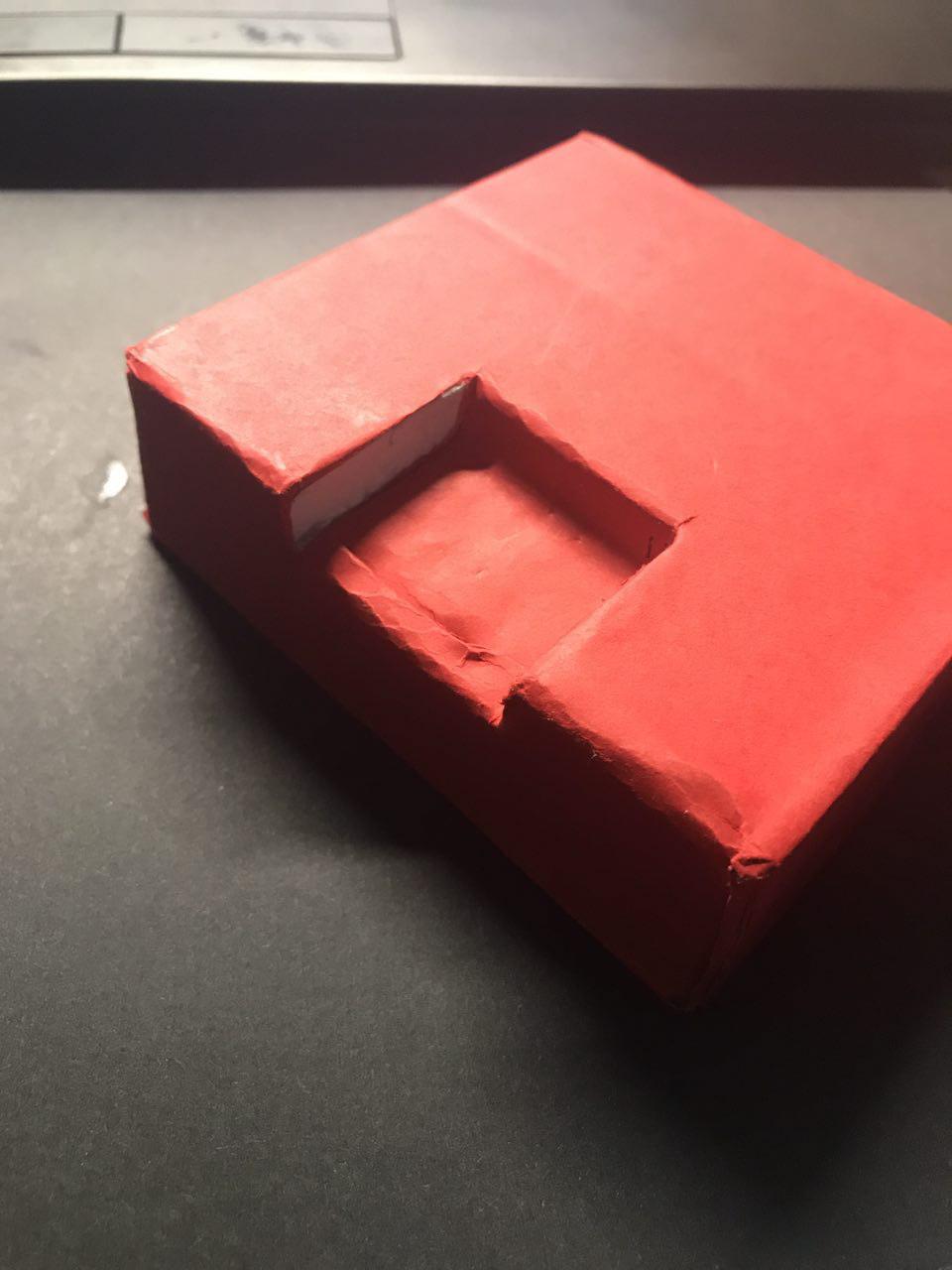 A snug fit for both pieces!!! Yay! 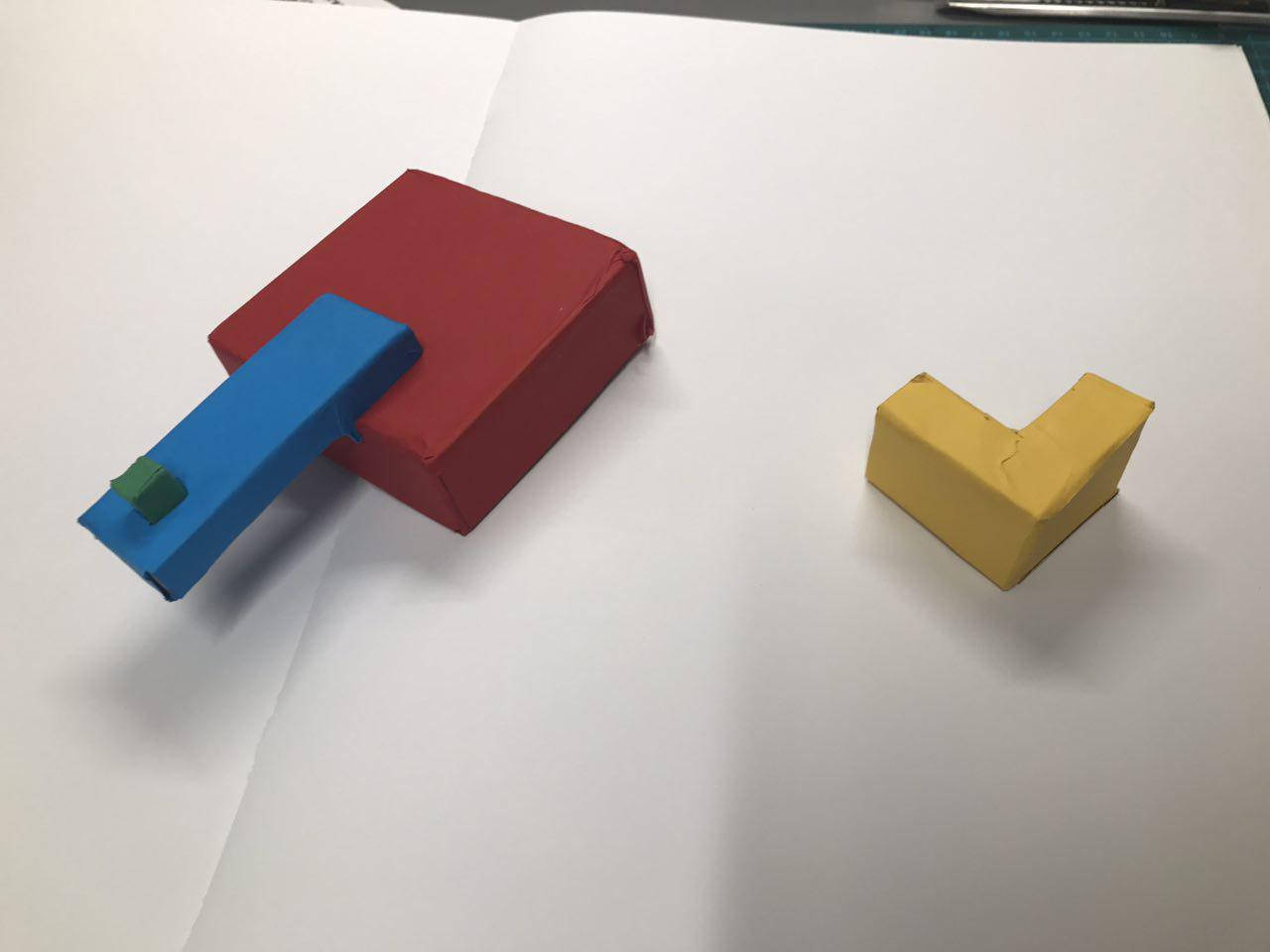 Applications for my models: for my first model, as it is not symmetrical, it resembles the USS destroyer with the control tower flushed to the side of the dominant.  For my application however, I would want something less violent. 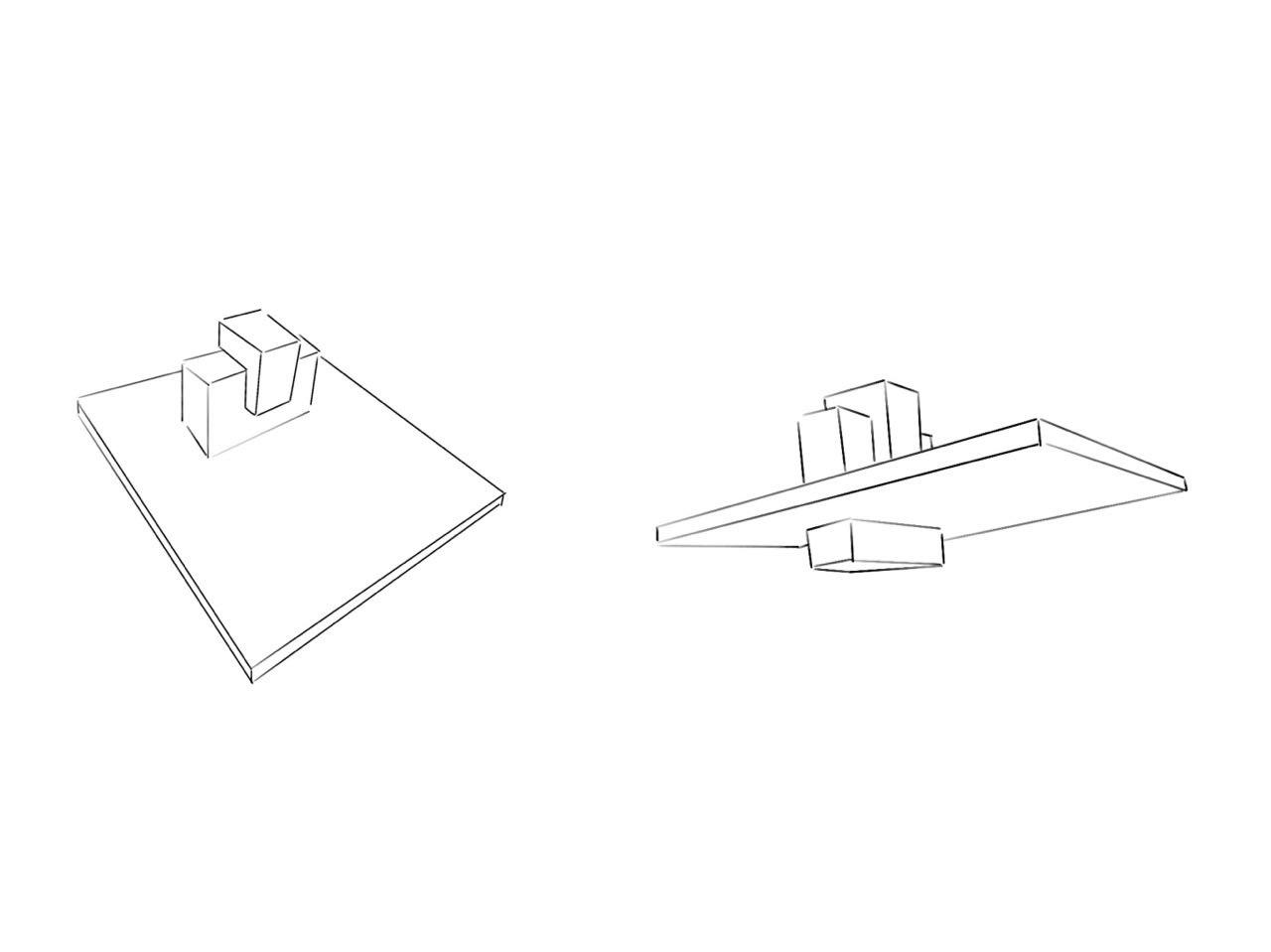 I sketched out different perspectives of my object.

After pondering for awhile, I realised that my figure could be used as a Book end. 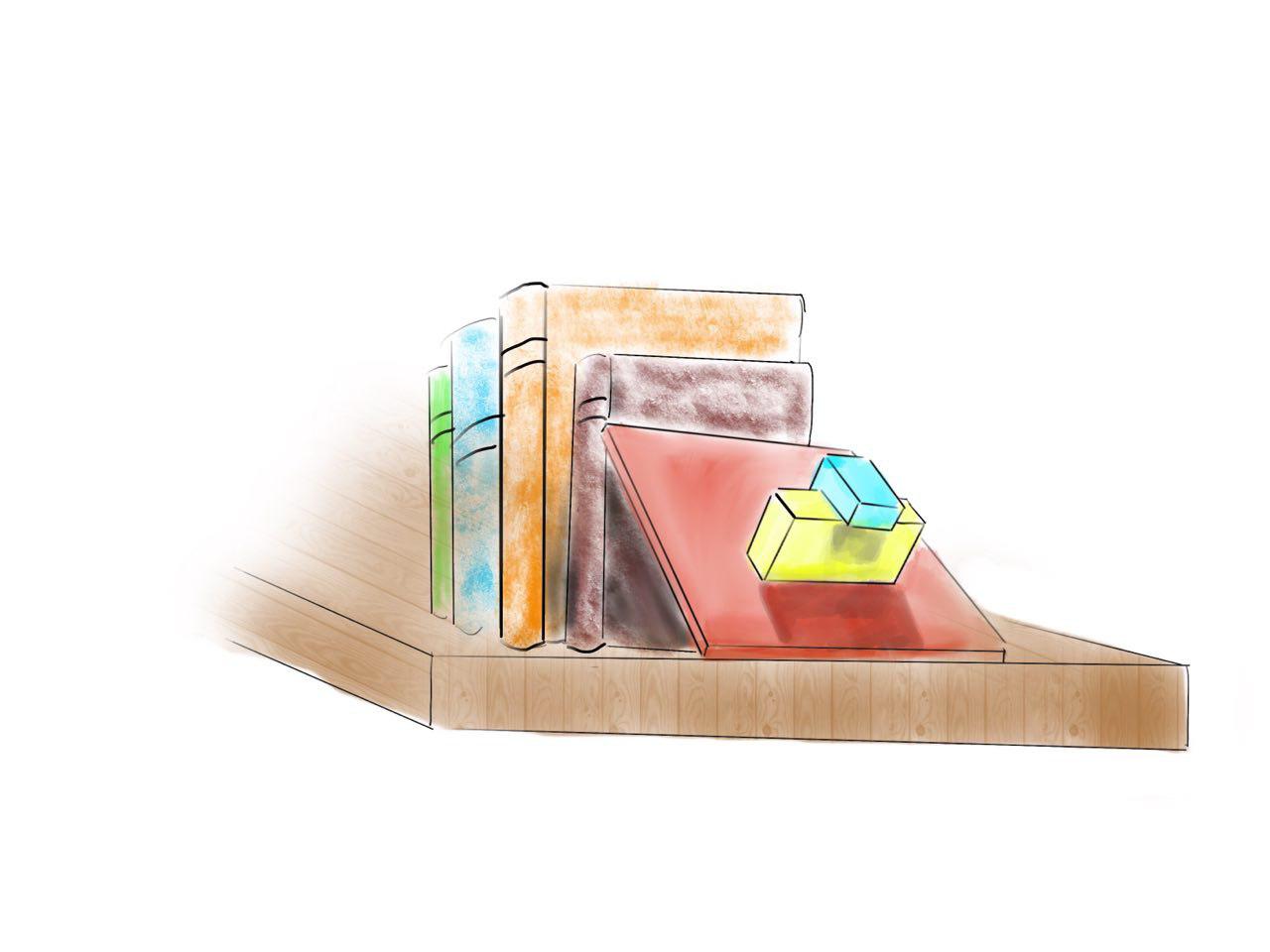 For my larger application, I decided to model it to something similar to the new Mediacorp building. The new Mediacorp campus at Portstown road boasts an elevated plane which has a lush green landscape, below which is a carpark. 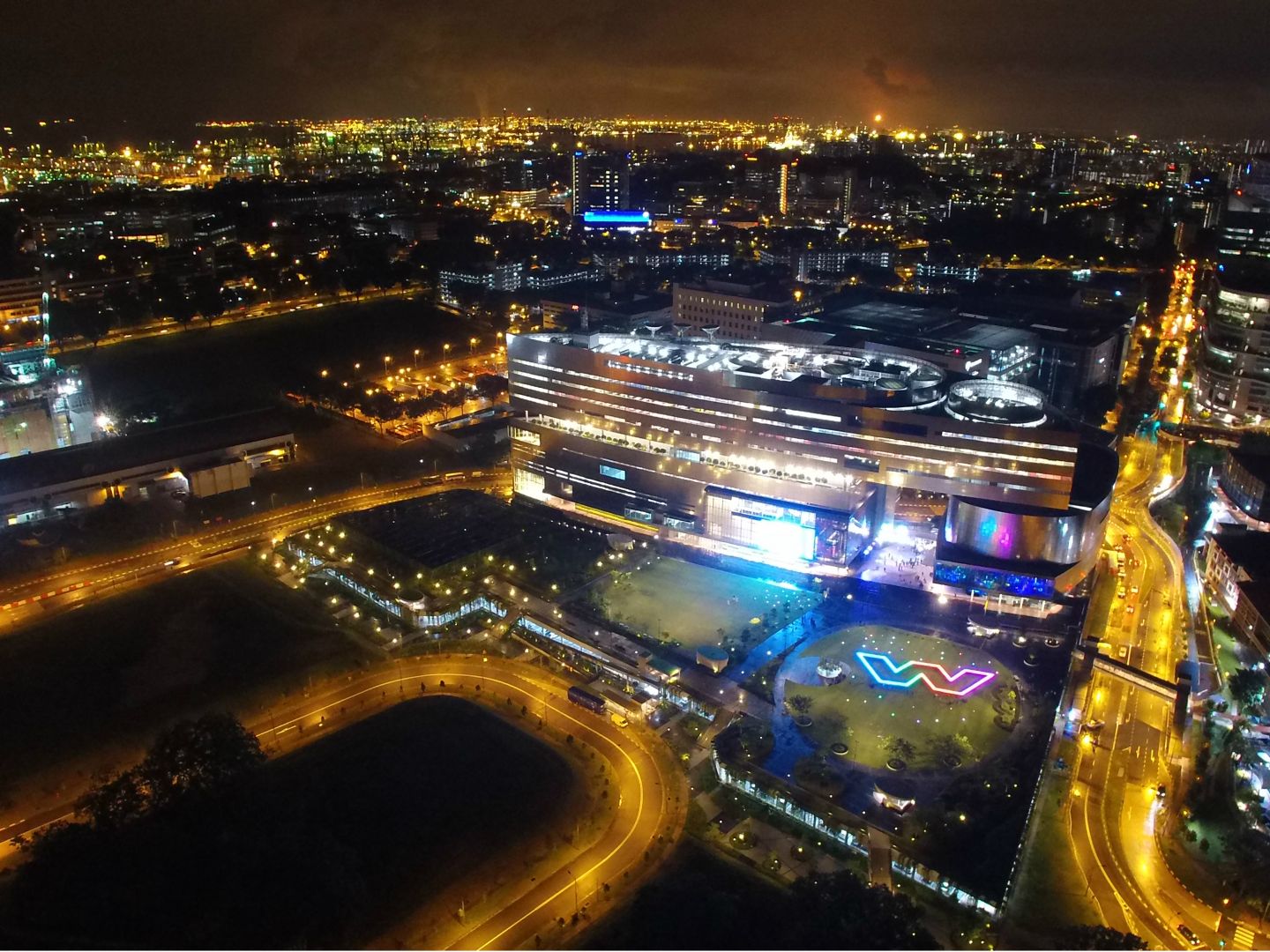 This was one of the few images I could find which featured the elevated green field. For my large scale application, I also placed two ponds and trees to add to the landscape.

This final model is different as compared to my initial model as I decided to reduce the length of the SO so as to make it more distinguishable from the SD. However, the downside to this would be that there would be only 2 objects visible from the bottom view.

Model 2 was a little trickier as I did not want a flush fit for my SD so much so that when viewed from the side, it would just be a diagonal line. To tackle this problem, I cut a new piece of foam with access at the top to enable it to be wedged into the D. This would result in more dimensions when looked at from different perspectives. I had issues with my SO as well as it would often be too big which would confuse the viewer from SO and SD. To tackle this, I drastically shortened the SO (with recommendation from Cheryl) and I managed to make it distinguishable. 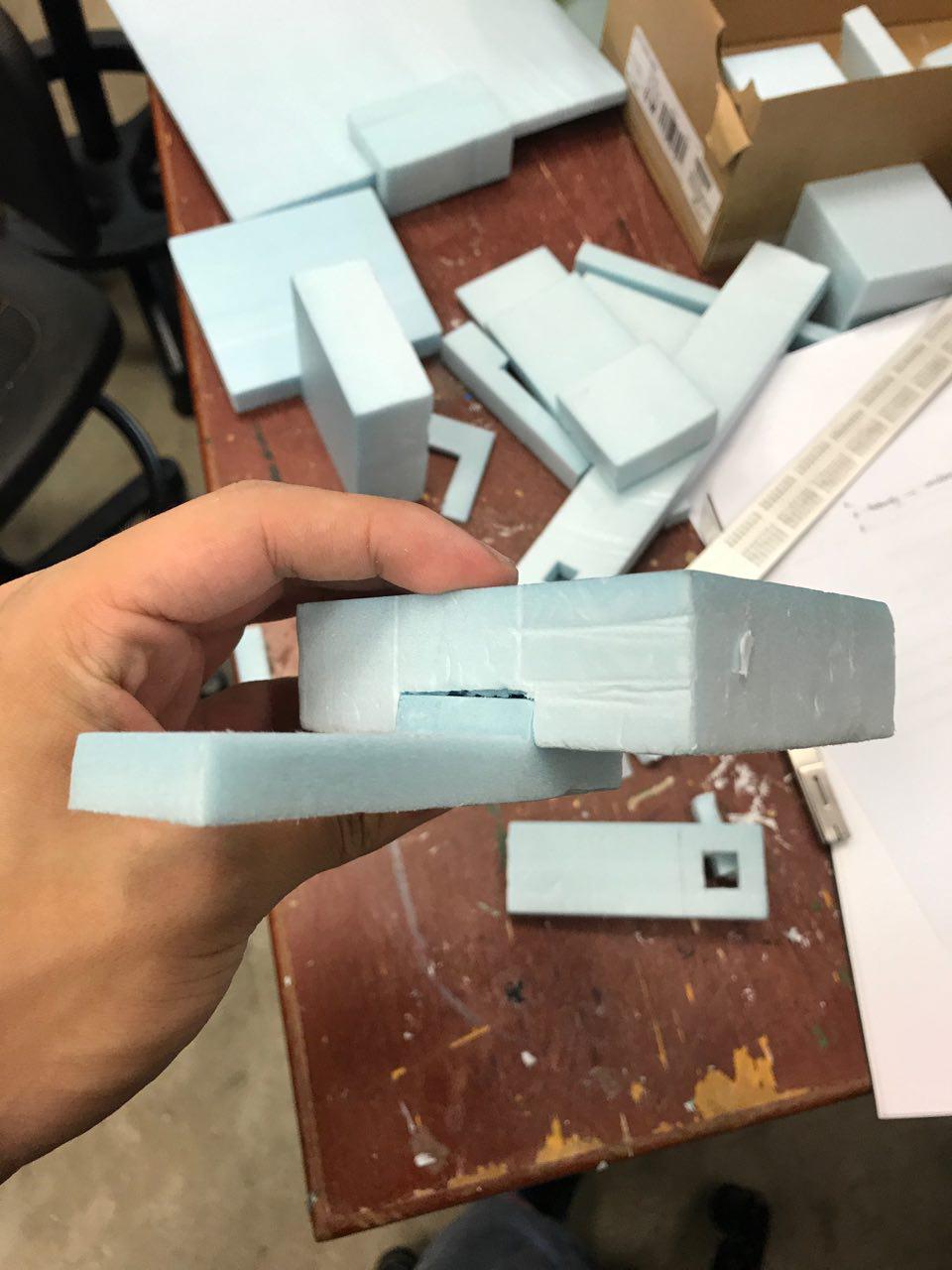 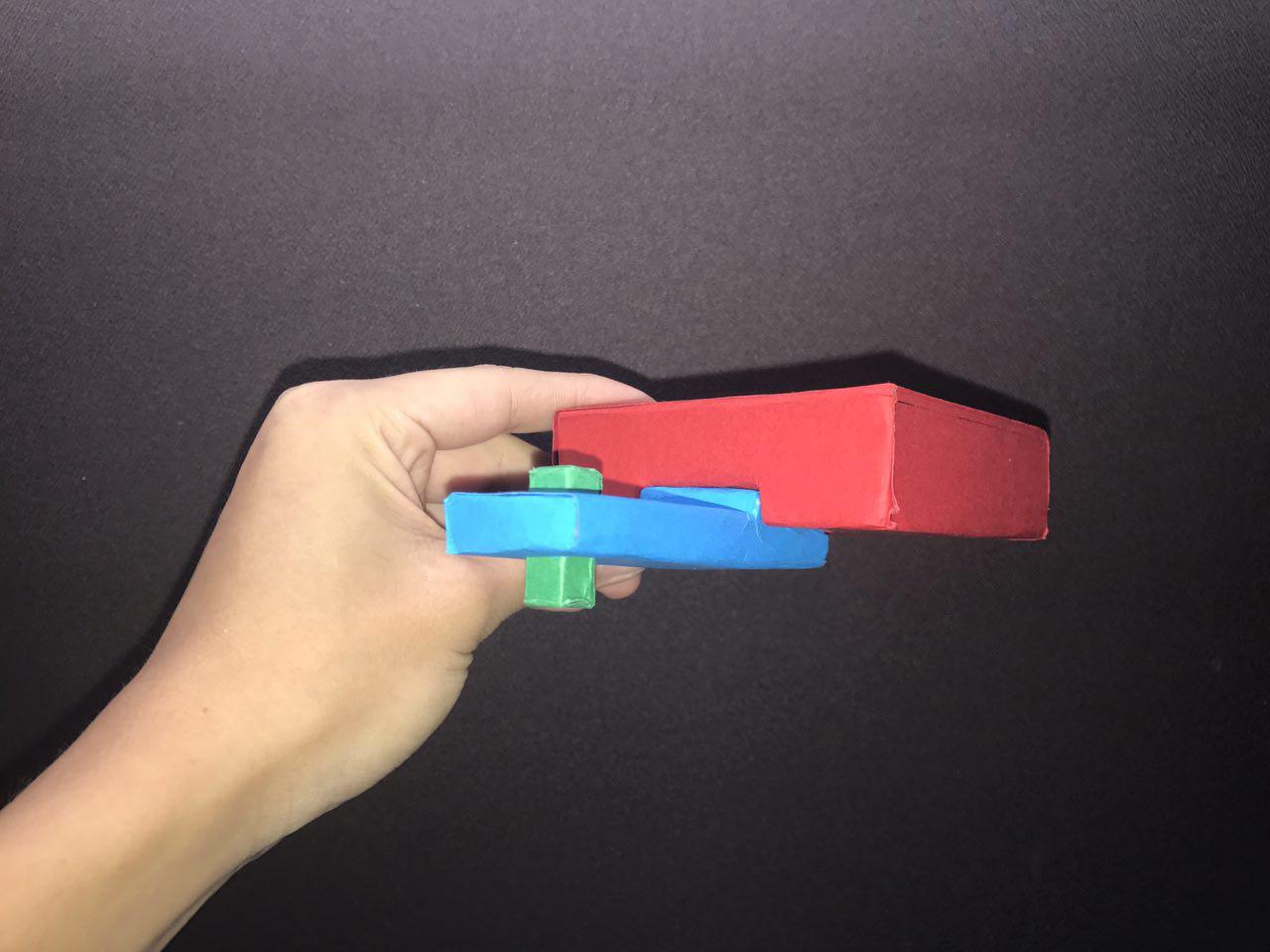 For the application of my object, I saw use for it in the toilet. It would make for a very fancy faucet. The SO and SD would be made out of polished metal while the D would have a rusted look to compliment the wooden panel behind. I could see this being used in showrooms already! 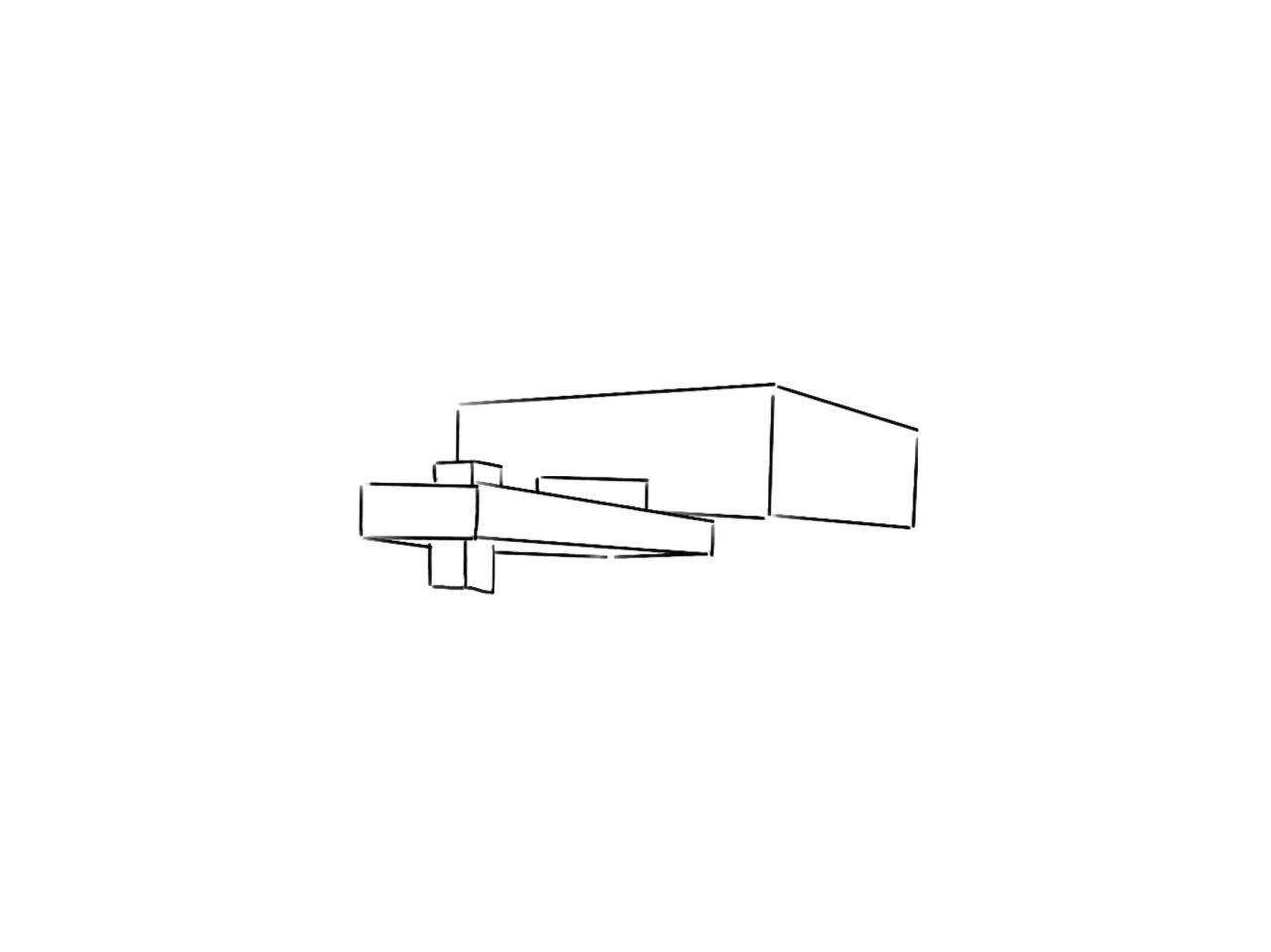 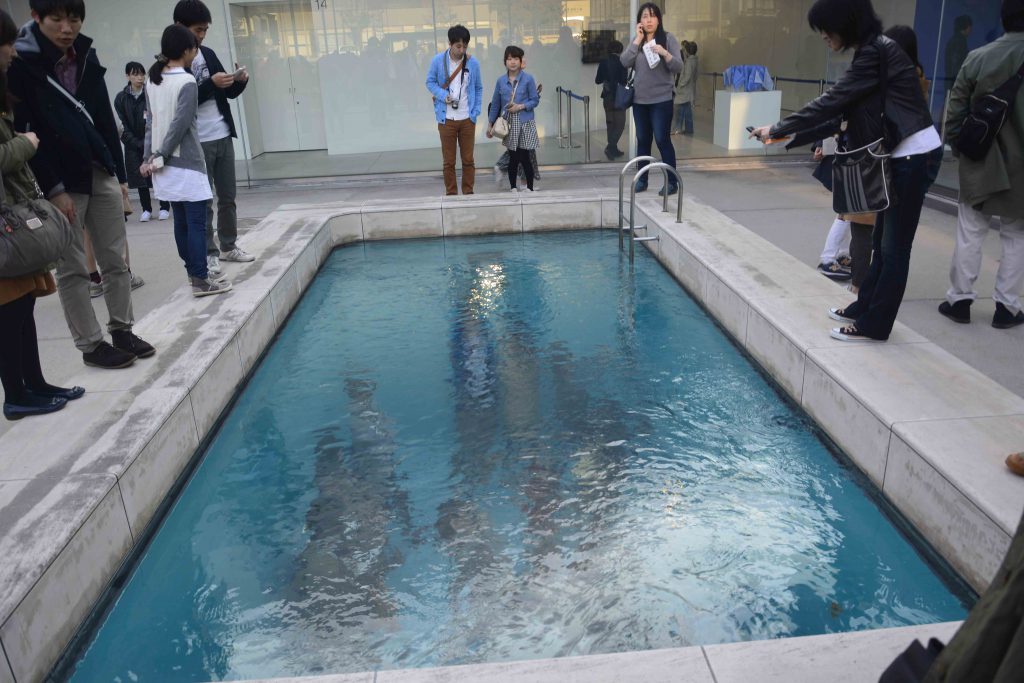 Wedging is the process of creating grooves to interlock 2 different objects.

Piercing is simply creating a hole through a larger object to insert a smaller one, ensuring that enough of the block is shown, relative to its thickness.

Cradling is the placement of an object inbetween 2 objects. Often, the SO. We have to forsee that the SO may be ‘eaten’ up by the other 2 blocks cradling it.

Another interesting principle we learned was the Gestalt Principle, where the sum of its whole is greater that its parts. This gives the illusion of the object being bigger that it actually is.

We were told to explore different materials for our assignment models. I updated my models to Ensure that the D, SD and SO are distinct and of different volumes. I explored the methods of wedging and piercing in my models as well.

I re-did all of my models, these are the results.

For object 1, I wanted to use a very large but thin base as the dominant as Cheryl (Our lecturer) pointed out that it is not always about the size, but more of the presence the object has. This changed my approach towards the model.

As you can see, the SD is placed a third into the D, utilizing the rule of thirds. I wanted the SO to be protruding further out from the D so that it would be visible from the bottom of the figure. However, this misdirects the viewer as they may assume that the SO would be the SD from the top view which is the second figure. 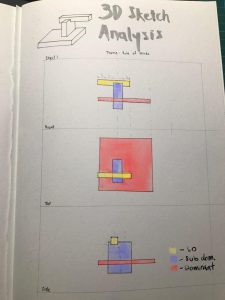 For my second model, i reused the SD (Blue block) from model one to form the D in model 2 as I wanted to have the theme of re-usability and interchangeability. As you can see, the for this model i followed closely to the rule of thirds which resulted in my object looking symmetrical. I had to make adjustments to the SO as it was confusing with the SD in a front view. This model looks somewhat similar to an army tank or an elephant, especially with the long nozzle. 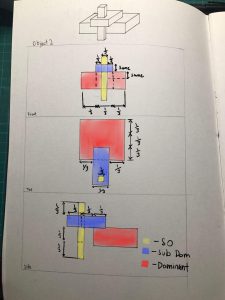 I experimented with using large blocks in my third model as well to come up with a concept similar to model 1. Initially, i wanted to use the same D as I would for model 1 and 3, however i needed to pierce the piece of foam, which would look unsightly and ‘unfinished’ in model 3. For this model, I wedged the SD on top of the D and i created a small insertion on the SD to fit the SO snugly, all while following the rule of thirds. 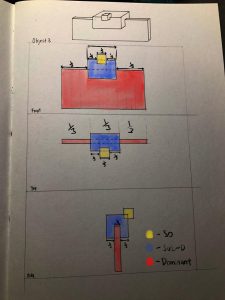 In the first lesson, we already pointed out flaws in some product’s design and touched on how they may be further improved in terms of aesthetics or functionality. We each had an object of interest where we had to present to the class. My object was an accessory worn on the wrist – it is made from paracord and it is sturdy when tugged on. The design on the paracord is called Desert Storm Camouflage which was what the U.S. military wore when fighting the Iraq War.  With the addition of the skull ornament, it added another level of depth which showed resilience and aggressiveness.

This first exercise of identifying and classifying the different groups of element is one I have never really thought of. These groupings are subjective as they can apply to colour, texture, material or even voids. Interestingly, the sub ordinates would be the one to define the object as most of the time, it would be a brand or logo,  in this case, it was the skull that tied the whole accessory together.

This is a sketch I did identifying the various elements and groupings of the accessory.

The second exercise we had was to craft an object using boxes of different sizes in relation to the groups dominant, sub dominant and sub ordinate. The theme I had to follow was rule of thirds.

The first object i had to craft was loosely based on a building near Dover Road which looks like a Dinosaur. It is a Singtel telecommunications tower and I used to see it almost everyday when heading for school. Unfortunately, limited to what I had, I could only make my object look like a duck. This exercise forced me to view the rule of thirds outside of photography which was what I was most comfortable with. Everything, from the neck of the ‘duck’ to the beak had to be placed in relation to the rule of thirds. I found it intriguing how the rule of thirds can make such a seemingly dull object somewhat pleasing to look at.

The next object was a little more experimental and less symmetrical. The rule of thirds still apply in relation to where the boxes are placed. However, I used objects with exceptionally contrasting volumes.  In some sense, it looks like a simple raft when viewed from above.

For my final object, it is more similar to my previous object where it was more abstract than aesthetic. The volumes of these boxes could be more varied to show the contrast between Sub-Dominant and Sub-Ordinate.