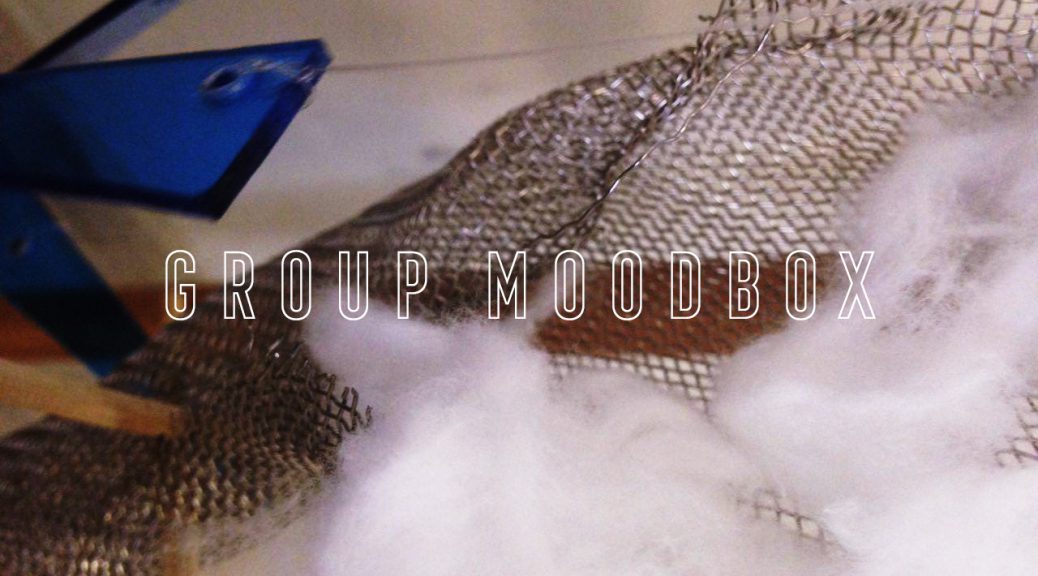 After the creation of our individual mood boxes, we now move on to our group mood box.

We had several ideas for how we wanted our group mood box to look like.

Here are some of our initial sketches: 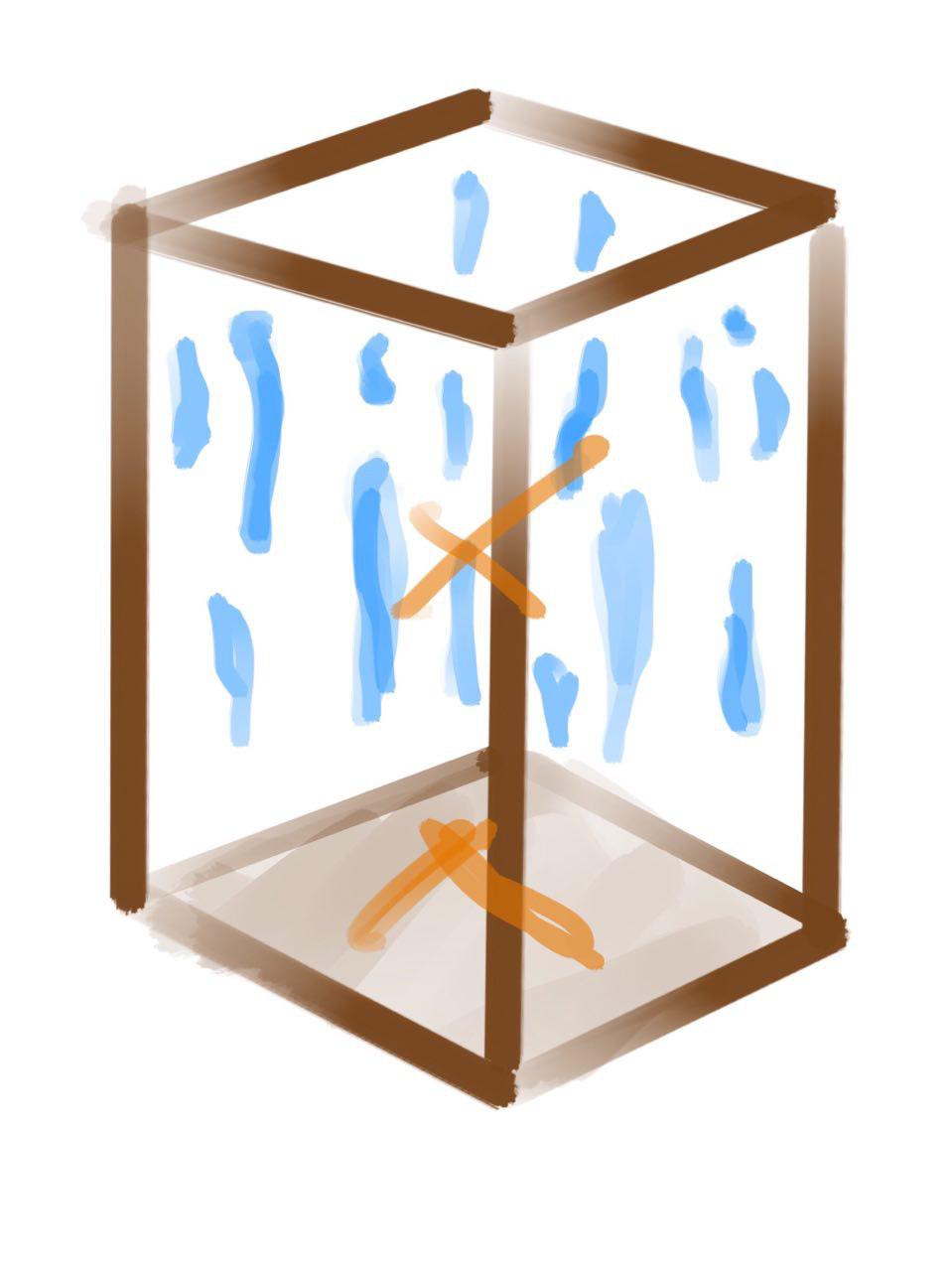 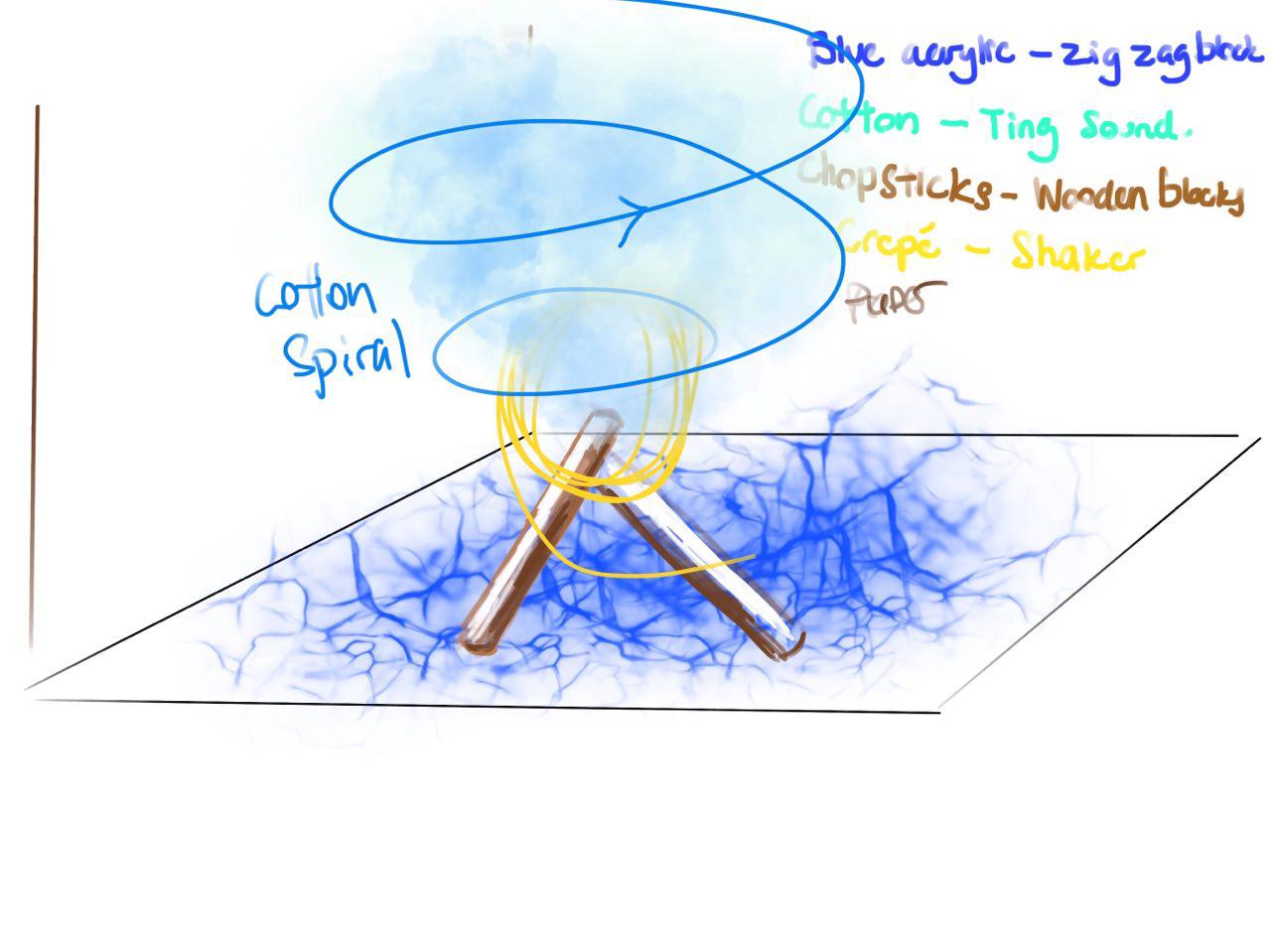 The materials represented in these sketches were ones taken from our individual mood boxes. 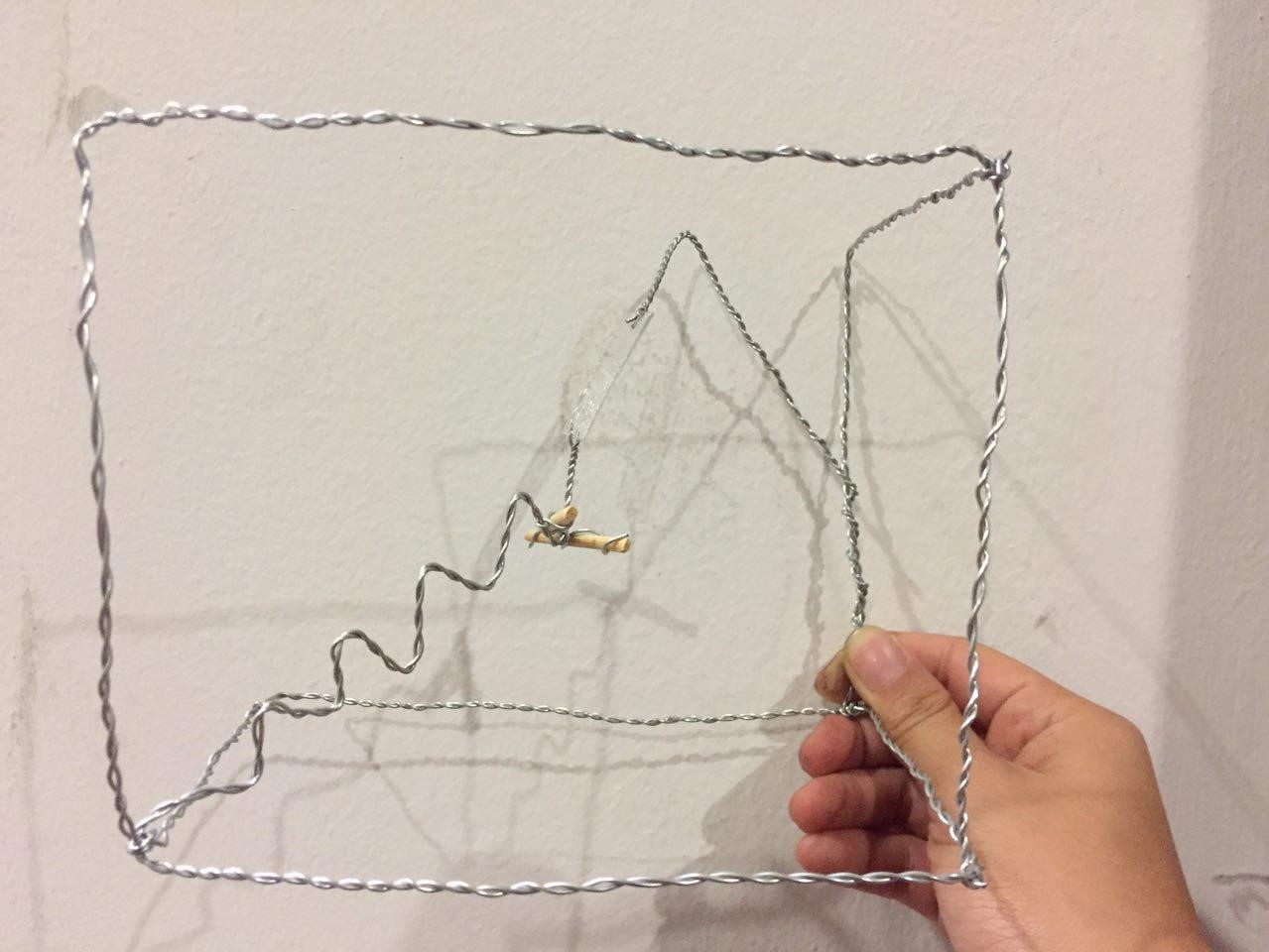 Hannah adopted a different approach to the sound. She made use of sharp waves to represent the sound which the Zig Zag blocks make, coupled with the ascending order to build up suspense to the next instrument.

At the end, we have a sharp drop. This is to represent the sound which the tone bars makes. This sudden contrast in composition would make sense only when the audience has heard of the sound. As you can see, the wire fades into the frame which accurately captures the essence of the sound dissipating into the air. 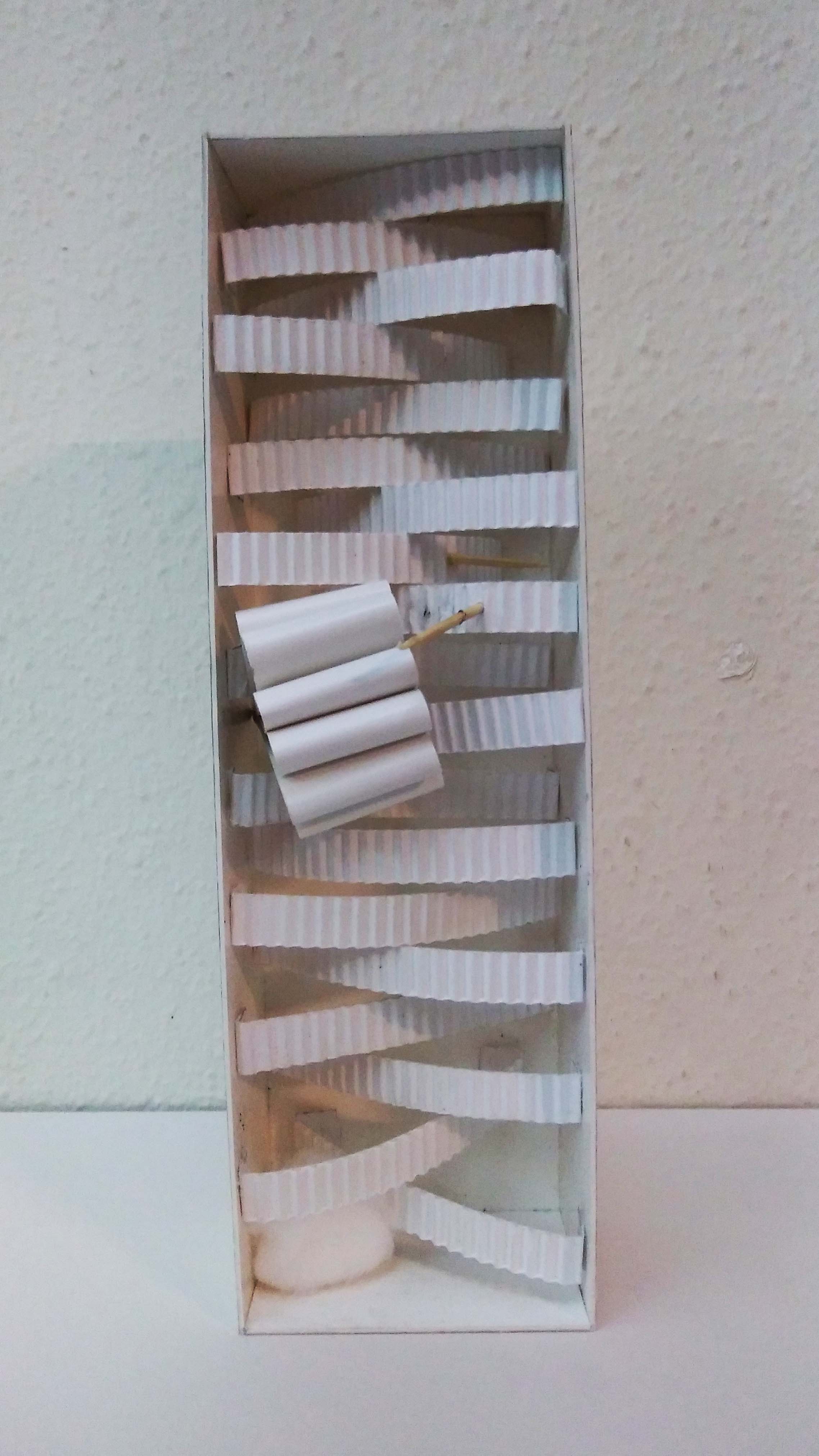 Ying Hui cleverly represented the dominant by using paper folded into a zig zag pattern as seen from above to create the texture of the sound which was rough.

The sub dominants can be seen from the use of tooth picks as well as the curved paper to represent the Tanggu sticks and the shaker respectively. As you can see, the toothpicks pierce the papers, similar to what Fendi depicted.

At the bottom, there is a subtle hint of the tone bars sound which is represented by the cotton wool. 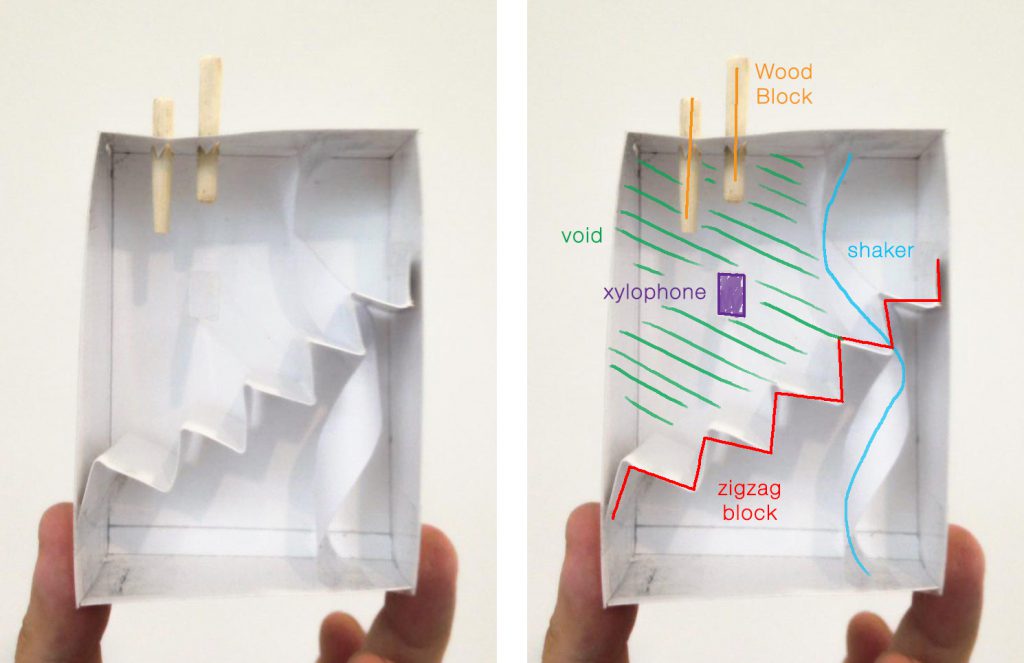 For Fendi’s mood box, he played around with different compositions of the sounds.

The rough sounds of the zigzag block is consistent throughout the piece, thus it runs across diagonally across the box, creating a sense of dominance.

Like above, the shaker evoked a sense of falling beads or water. Thus he used a gentle curved plane that goes downwards to represent an organic flow.

Fendi felt the wooden blocks were an element that seem to be a hard, short sound that comes out in the distance as a sort of echo. Thus he placed it almost piercing out of the box, as though a man was in a distance, clapping his hands.

The tone bars was a final note before a long silence. He showed this by piercing the void with a piece of acrylic to show how the note seemed to echo in a void space.

Making the components for the Mood Box!

As you can see, there are some consistencies with what materials we use. These include the wooden sticks to represent the Tanggu’s, cotton wool to represent the tone bar at the end of sound 2 and the Zig Zag pattern for the dominant zig zag blocks.

However, we wanted to try a different approach to the dominant which was the zig zag sound. Instead of using crumpled paper or plastic to represent the rough sounds of the zig zag blocks, we used hard wire mesh instead!

Making of the dominant:

Here you can see Hannah and I struggling to get the wire mesh into the form we wanted. We had to use a heat gun to mold it into shape.

We vaguely look like modern sushi chefs trying to make a maki roll….

Making of the Sub Dominant:

As we agreed that the shaker sound seemed to resemble the idea of a rain drops or water droplets, we went ahead and cut blue acrylic to small triangles, to show it piercing the sound, similar to the Tanggu wooden sticks.

Hannah and I used the soldering rod to pierce holes into the acrylic pieces and the warped wire mesh respectively.

Making of the Sub Ordinate:

The making of the sub ordinate was a tedious process as we had to gingerly fluff up the cotton wool while try and hold it in place with glue at the same time. We spent a tremendous amount of time pulling apart the cotton wool to make it look like a cloud – I really thought it would be easier. 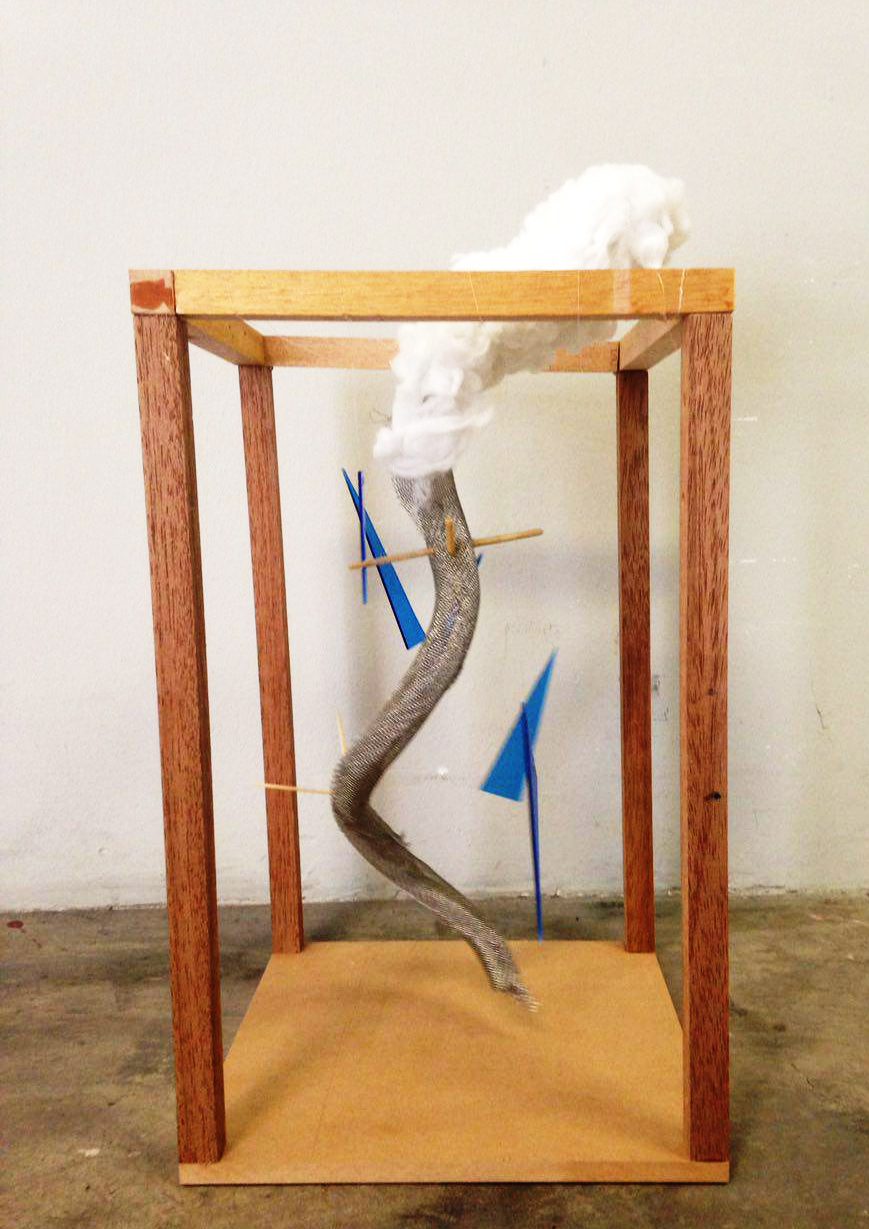 Zig Zag Block – The rough sounds of the zigzag block is consistent
throughout the piece. To demonstrate this, we took a hard wire mesh and warped it to form a spiral through the entire frame. The rough and prickly texture was to represent the unevenness of the Zig Zag Block.

Shaker – Like above, the shaker evoked a sense of falling beads of water. To show this, we cut up pieces of blue acrylic in the shape of triangles and hung them off fishing lines to represent rain cutting through the voids.

Cotton Wool – The group enjoyed the idea of the sound fading into the distance, which is why we wanted the cotton wool to protrude out of the frame, dissipating into thin air. As the cotton wool blends in well with the background we, it was an apt choice of material to encapsulate the idea.