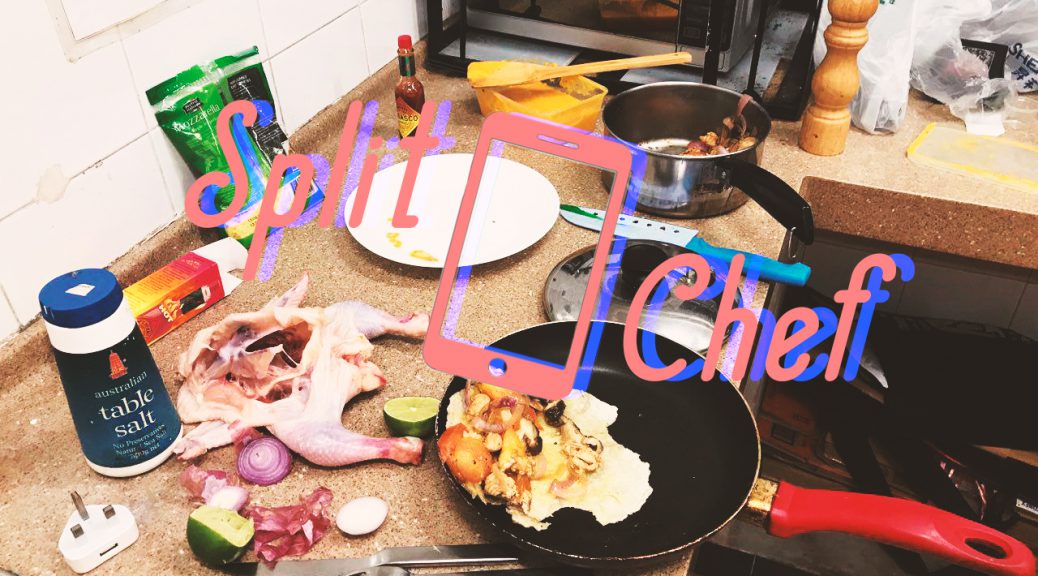 A brief introduction to our Final DIWO Project!

Our team which consists of me, Dion, Brendan and  Bryan, came up with the idea to go against the conventional idea of cooking, whereby the recipe and ingredients used for the dish is not readily available to the cook.

How we would be doing this is by assigning two roles: an Instructor and the Cook.

The Instructor  would have to disseminate the what ingredients as well as the steps for cooking  purely by drawing only, within a time limit.

This is similar to the game: Broken Telephone, whereby a message is shared among a group solely by whispering. The final person to receive the message is supposed to figure out what it means to successfully complete the objective. All this will be happening in third space through Instagram Live.

We decided to have a test run on the 29th to iron out any potential disruptions or complications which we may face. This reflection would be from my perspective as the Cook.

The initial ingredients were relatively easy to decipher, such as the tomato and the onions.

However, then came the more confusing ingredients such as the banana(?), the chicken (I was confused which part of the chicken it was in the drawing, so I just bought a small chicken) and I bought a pack of DUMPLINGS which actually turned out to be macaroni (Brendan threw that in to throw me off). Bryan (the Instructor) also drew a bottle with some shapes on it and left it for my interpretation, and with that, instead of Barbecue Sauce, I ended up buying Tobasco Sauce. 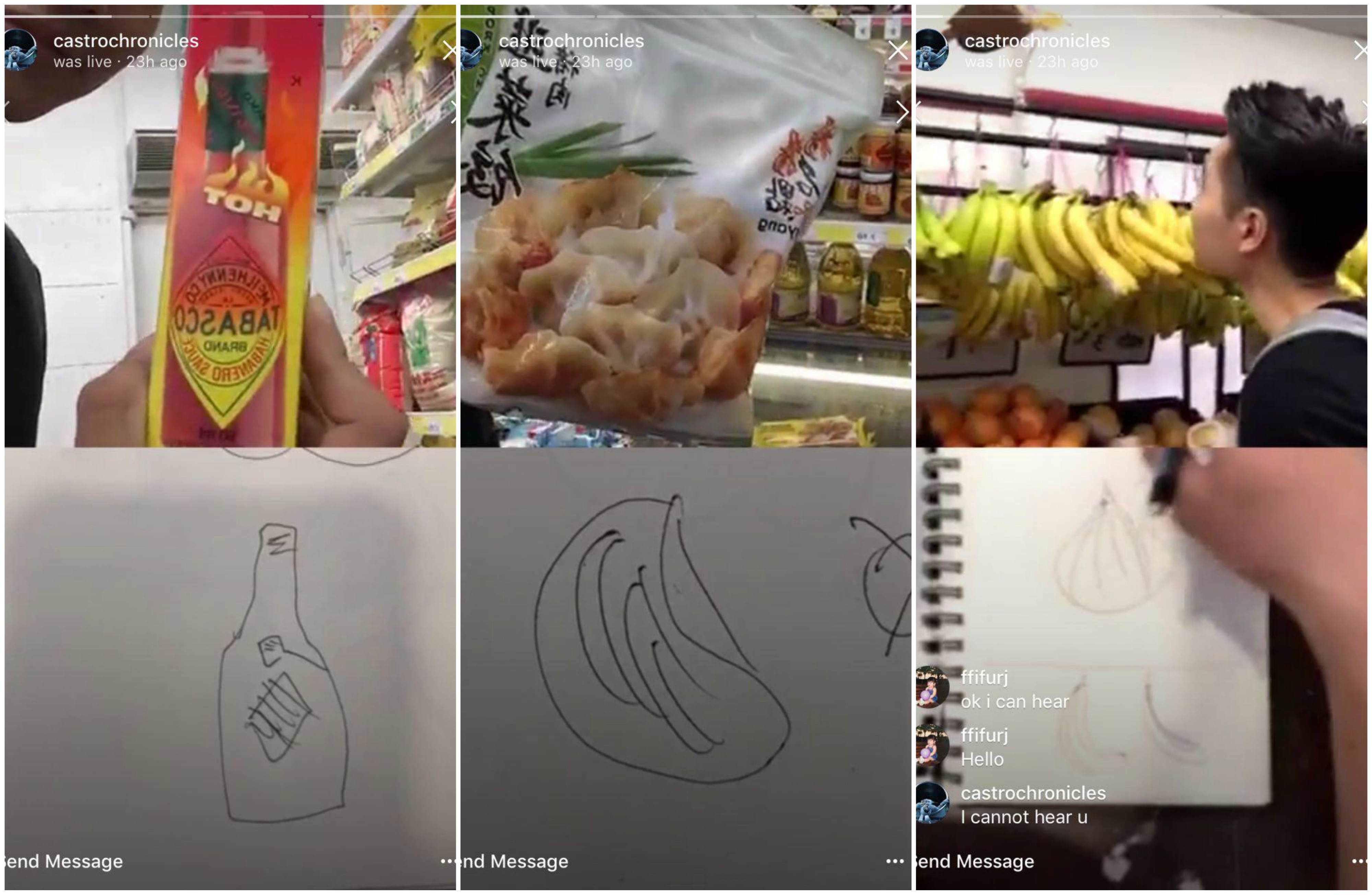 Here are some of the things I got ‘right’, which were slightly tricky to figure out, like the tortila wrap, the chicken and the Shittake Mushrooms (I didn’t get a screen shot of it) 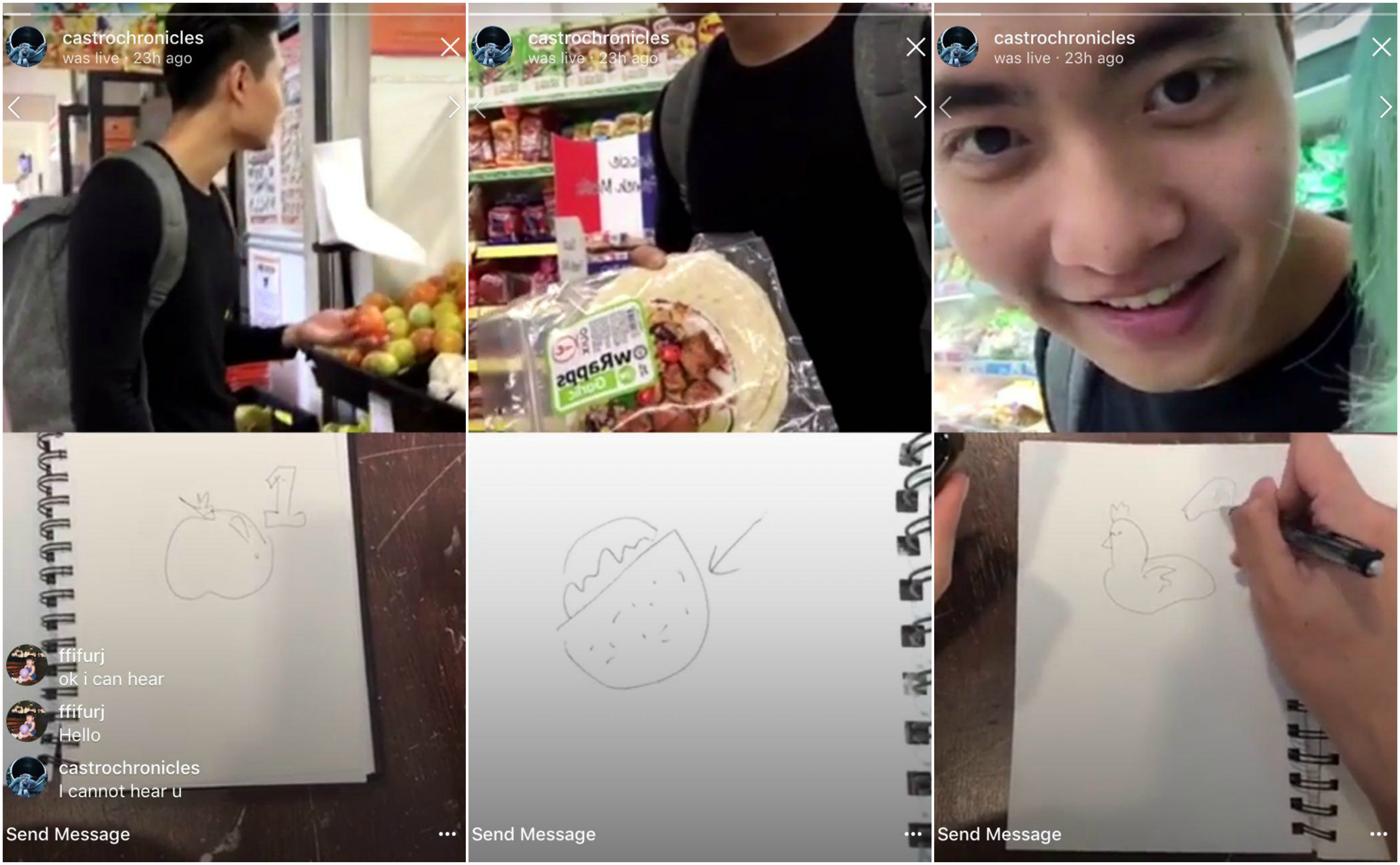 We immediately ran into some complications at the start as we did not prepare enough utensils and crockery to cook the food. The reception at the kitchen was also terrible which really affected the image quality and the smoothness of the trial run.

I also had to wait for the chicken to defrost in the microwave which took up 20 minutes because it was a whole chicken.

Bryan had to leave halfway so we got Zhen Qi (Our friend) to stand in as the Instructor. I showed her whatever ingredients I purchased before hand to give her a better idea and a frame of reference when she needed to draw out the ingredients.

After Zhen Qi (ZQ) drew out the instructions, we identified a problem as the Instructor did not have anything productive to do while waiting for me to complete the task. 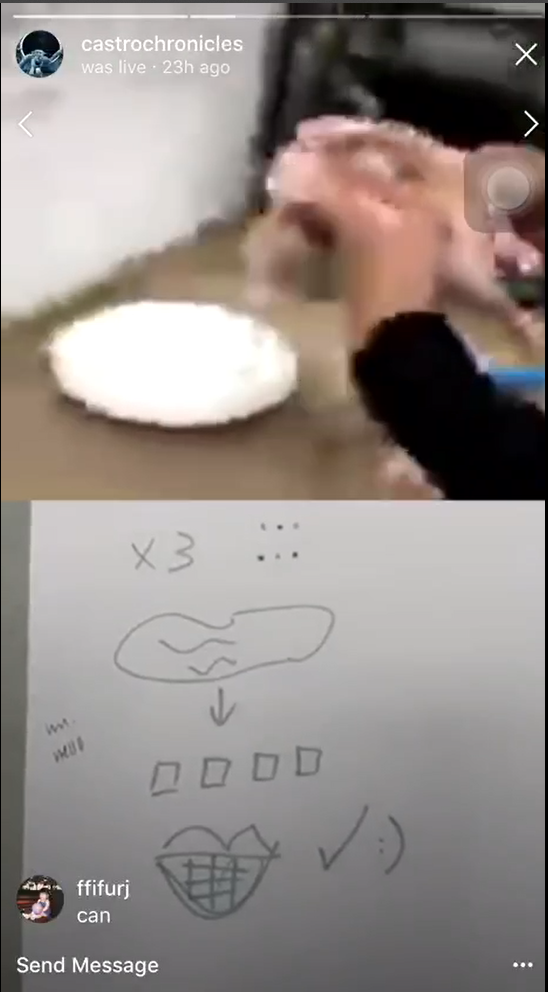 As I was busy butchering the chicken to cut into cubes, Zhen Qi was left clueless as to what to do.

Another unique issue we identified is, what happens if the natural instinct of the Cook comes into play? ZQ illustrated one of the instructions which had ’20s’ on it, and I was doubting the instructions as I interpreted it as: fry for 20 seconds. Which would definitely be too short a time to cook chicken. (Around 6min 20 seconds, the audio got cut off half way 🙁 )

Because of this, I bargained with them to allow me to cook the chicken for more than 20 second, to which they called me a ‘cheat’ for not following the rules!

This begs the question, would the outcome be the same if  we allowed for the natural instinct of the Cook to interfere? How much leeway should we give?

For the most part, I was able to interpret the cooking instructions as I have prior experience in cooking, which made it easy for me to decipher what I should do next.

The other problems we faced were just due to the lack of the proper equipment such as a pot which was able to be used on the induction cooker and I did not prepare enough oil to be used. Thus, as I was attempting to fry the Tortila wrap, it burned because there was not enough oil and it also could not fit into the pan.

These are some screenshots of me trying to decipher what the instructions were. The first frame was interesting as it was actually ZQ telling me to set the heat on low. I was confused initially as the drawing did not look anything like food. 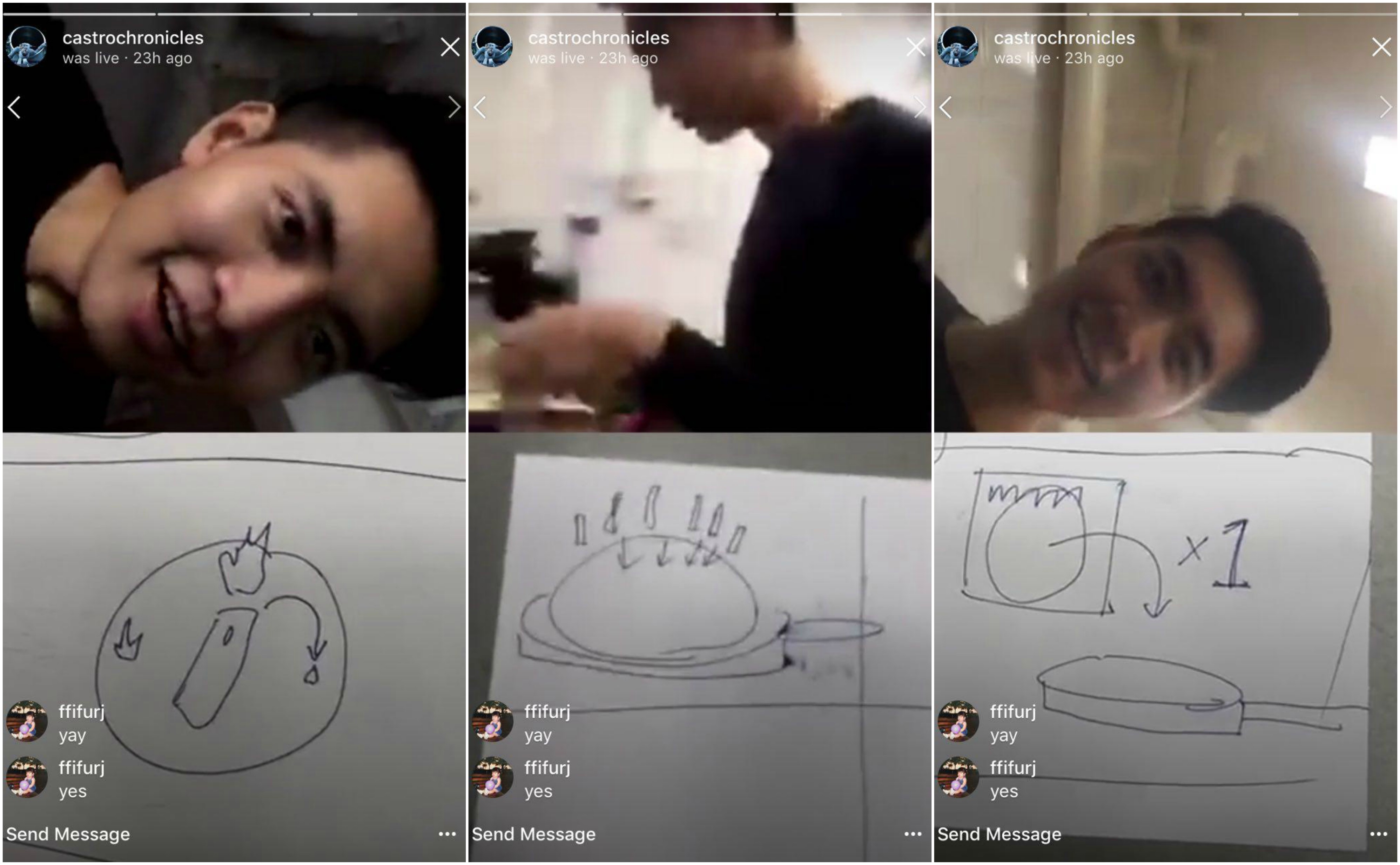 This is Part one of the Cooking Phase! 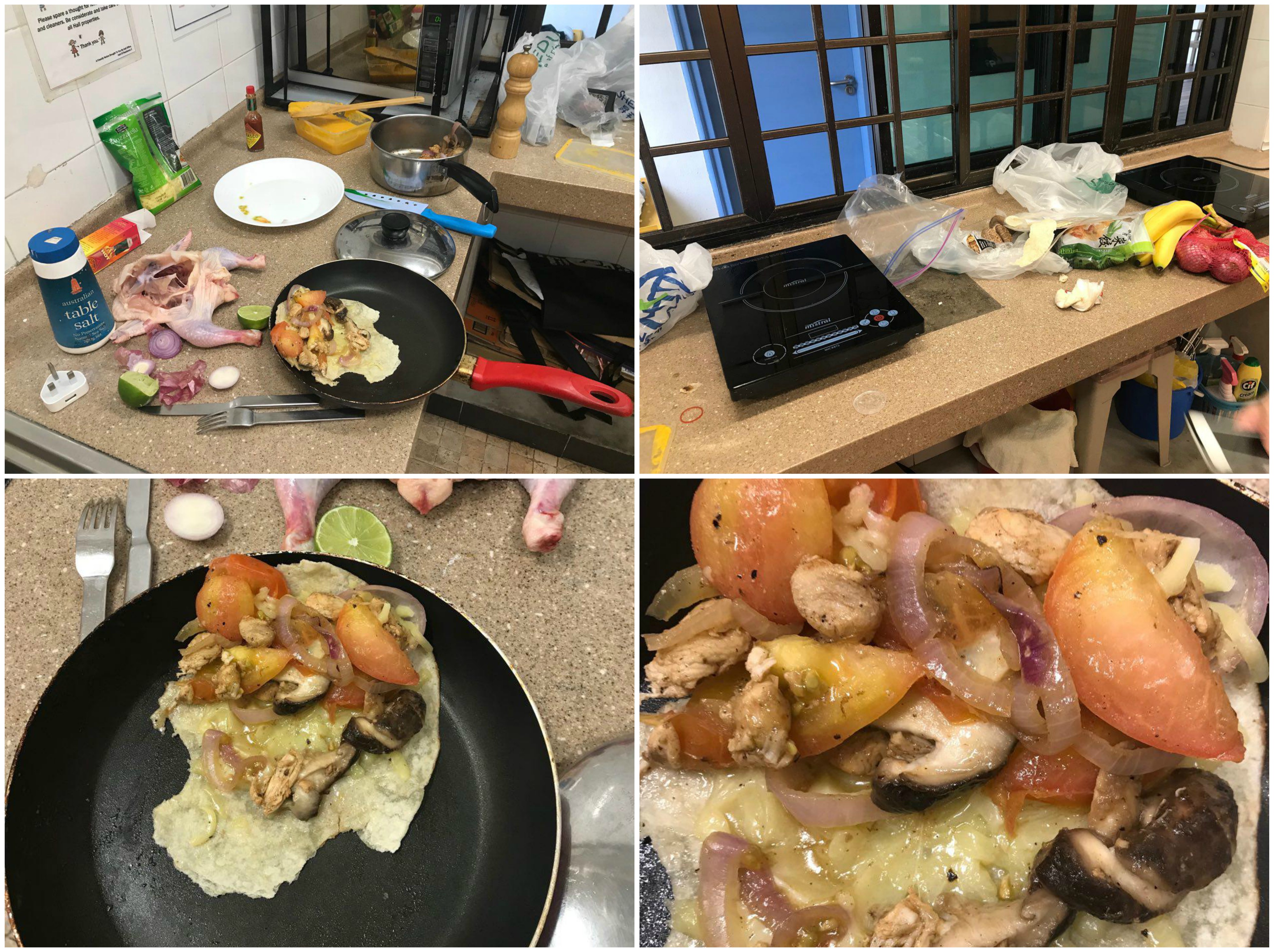 Overall I would say that it was a good run because the outcome was something edible, however, the results may be significantly different if the Cook did not have any experience in cooking.

I would also like to draw your attention to this picture to show how unprepared we were for this trial run. 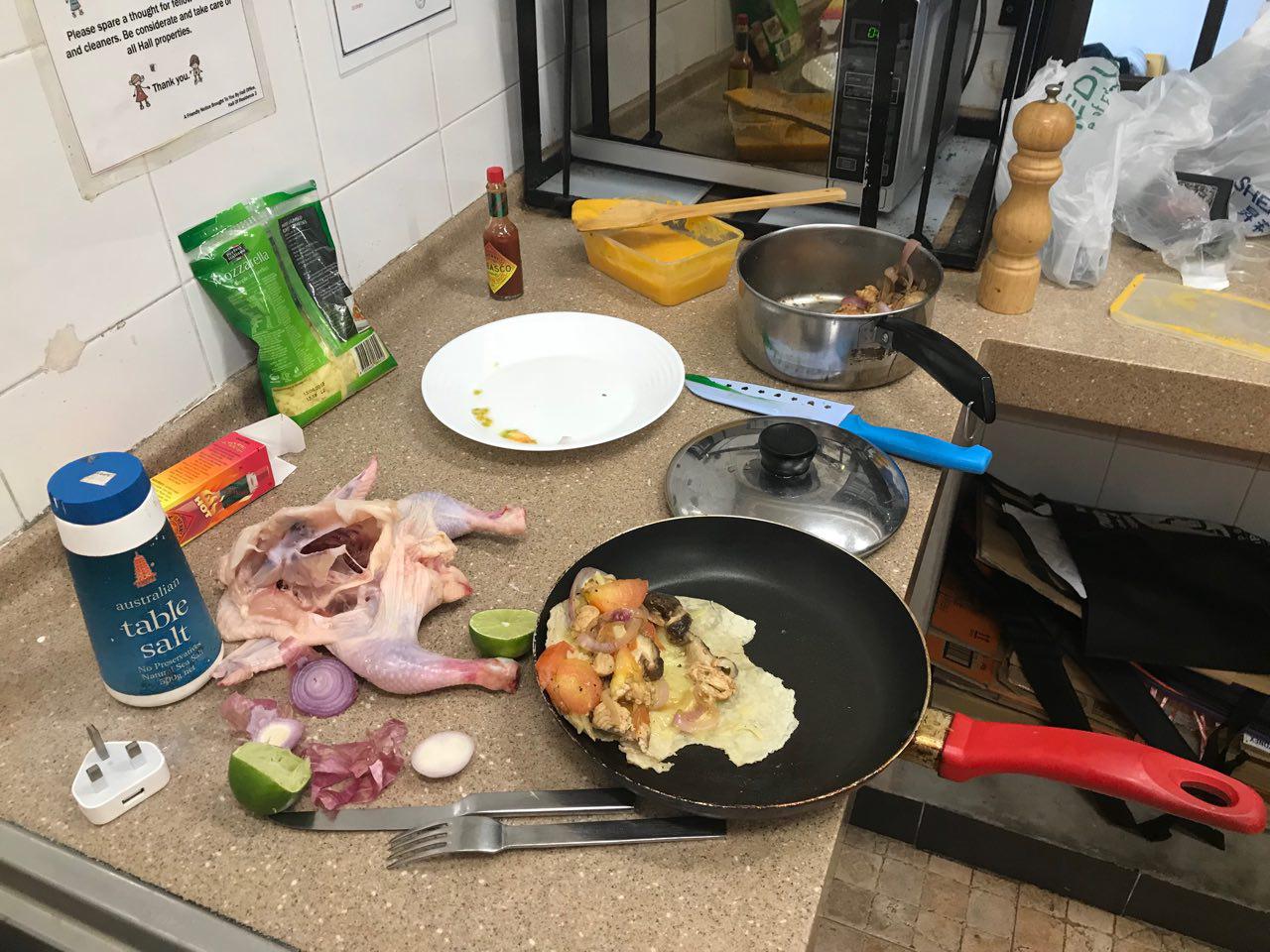 I was cutting up the chicken on the counter top because I assumed the pantry would have a chopping board. And since we didn’t have anywhere else to put the chicken, I just left it on the tabletop.

Do check out what the rest of my group mates have to say through their perspective!!