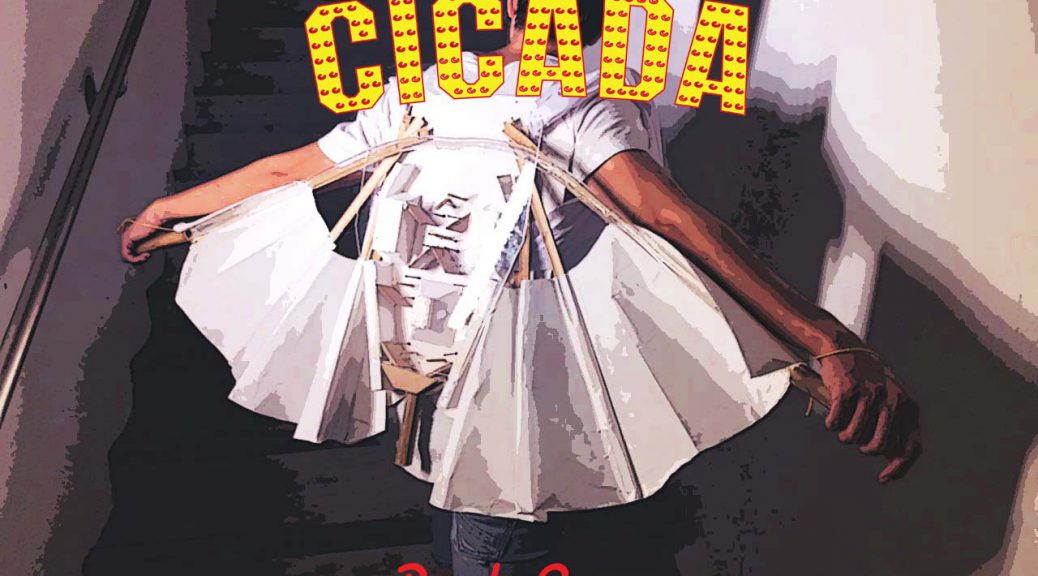 Brendan and I began to explore our sounds further and we looked into what the eyes and arms represented.

We incorporated the best elements from each of our sound models which was the representation of the eye as a shutter as well as the relation of my sound to a humming bird.

We also began to explore the macro movements of the arm, pivoting along the shoulders instead of the elbow to create greater movement. 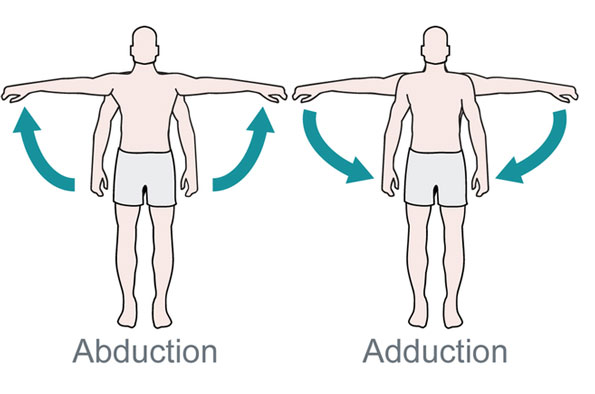 Initially, we thought of creating an umbrella to represent the eyes. The opening of the umbrella would be parallel to a pupil letting light into the eyes.

Because we had to incorporate a form of fabric or paper into our mechanism, we decided to use rice paper! 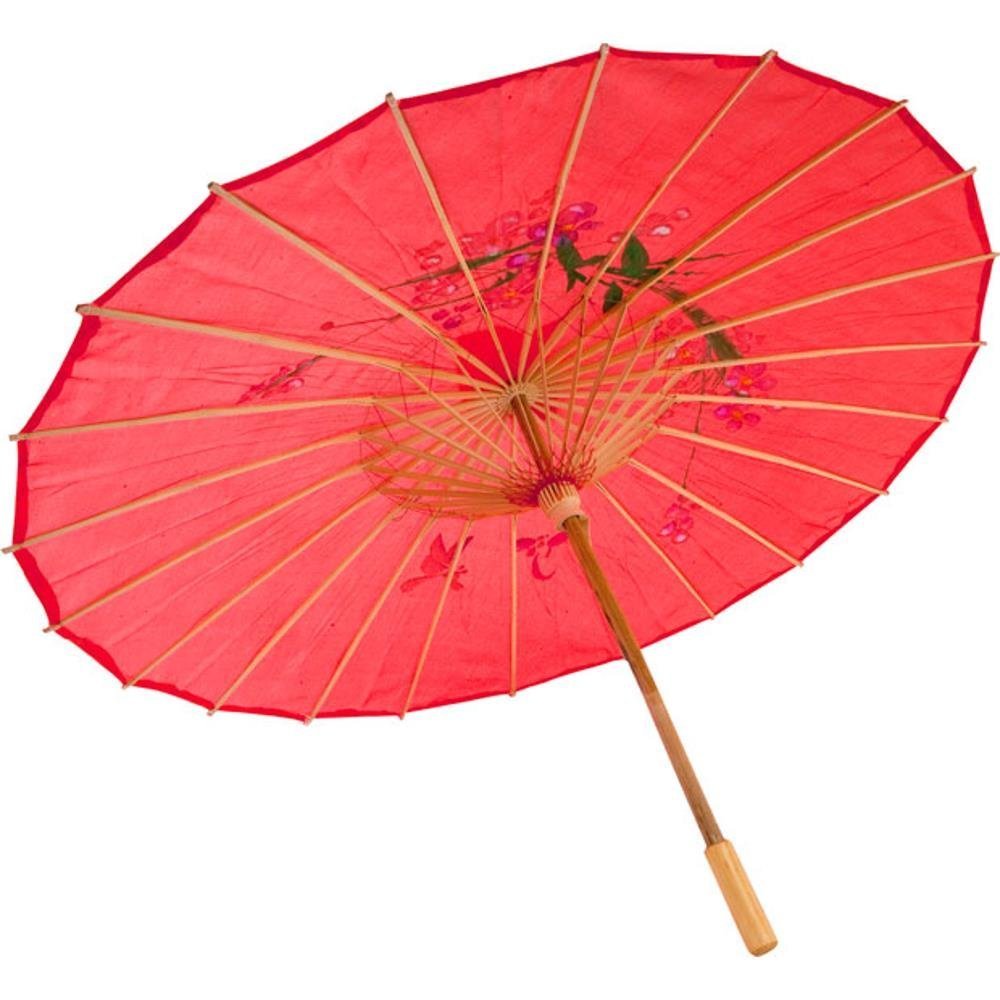 To include the macro movement of the arm, we thought of creating a flute using the handle of the umbrella as it would be able to create sounds as the umbrella was swung.

We decided to do some research on the construction of a traditional Japanese umbrella but realised that we do not possess the skills and dexterity required to create such an intricate item.

Cheryl also commented that it should be more of a wearable object, rather than an accessory, otherwise it would simply become a musical instrument.

We went back to the drawing board and decided to revisit the idea of incorporating wings into our model, this time using elements from the umbrella. 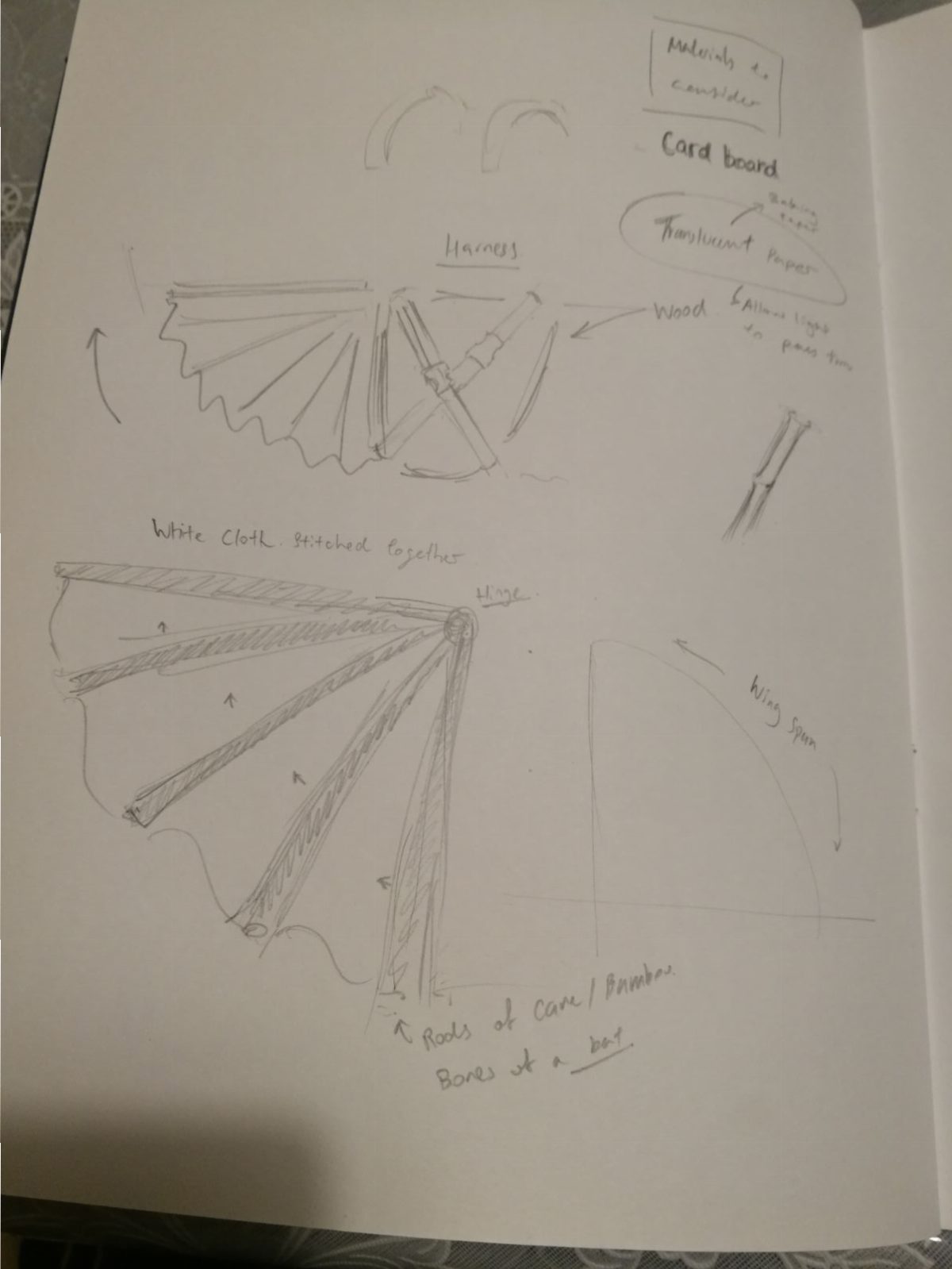 We really liked the aesthetic of bamboo and paper and it made senses in the context of a bird as their bones are hollow. We got a 3m long bamboo pole and cut it down to my arm’s length as it was going to be attached to me.

The bamboo was a little hard so Brendan suggested that we submerge it in water to allow it to soften. We placed the bamboo into the ADM fountain overnight to see if the theory actually works.

However, despite our optimism, the bamboo just turned out to be a darker shade after taken out of the water and it was also filthy due to the buildup of slime and dirt. 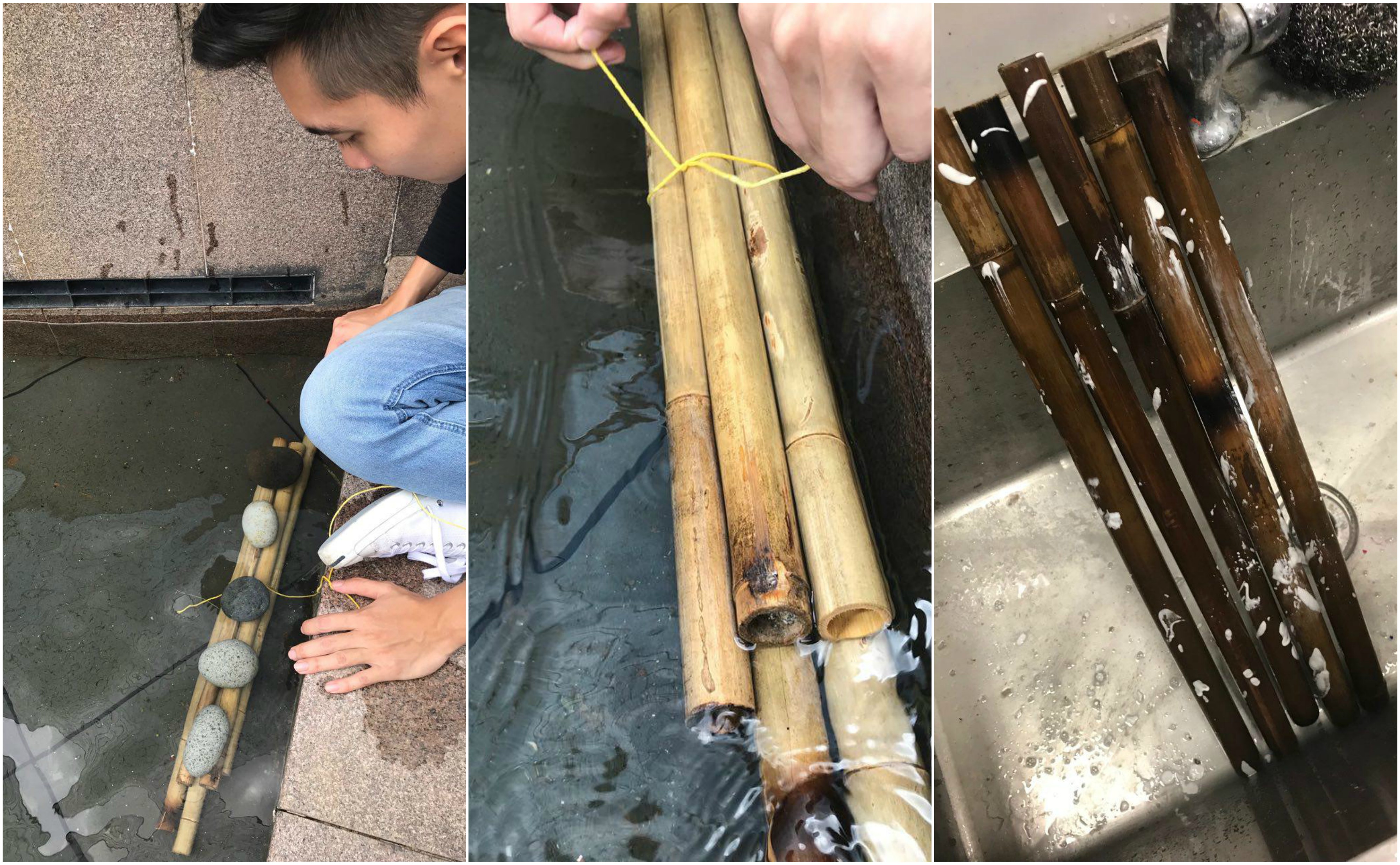 I observed from the umbrella making video that they did not use whole bamboos for the spokes of the umbrella frame. Thus, decided to split the bamboo into quarters to make them more flexible as well as increase the amount of bamboo rods we had.

To do this, I took a wood carver and hammered it perpendicular to the bamboo pole, creating a crevice in the pole. After that, it was a matter of splitting the bamboo into two. 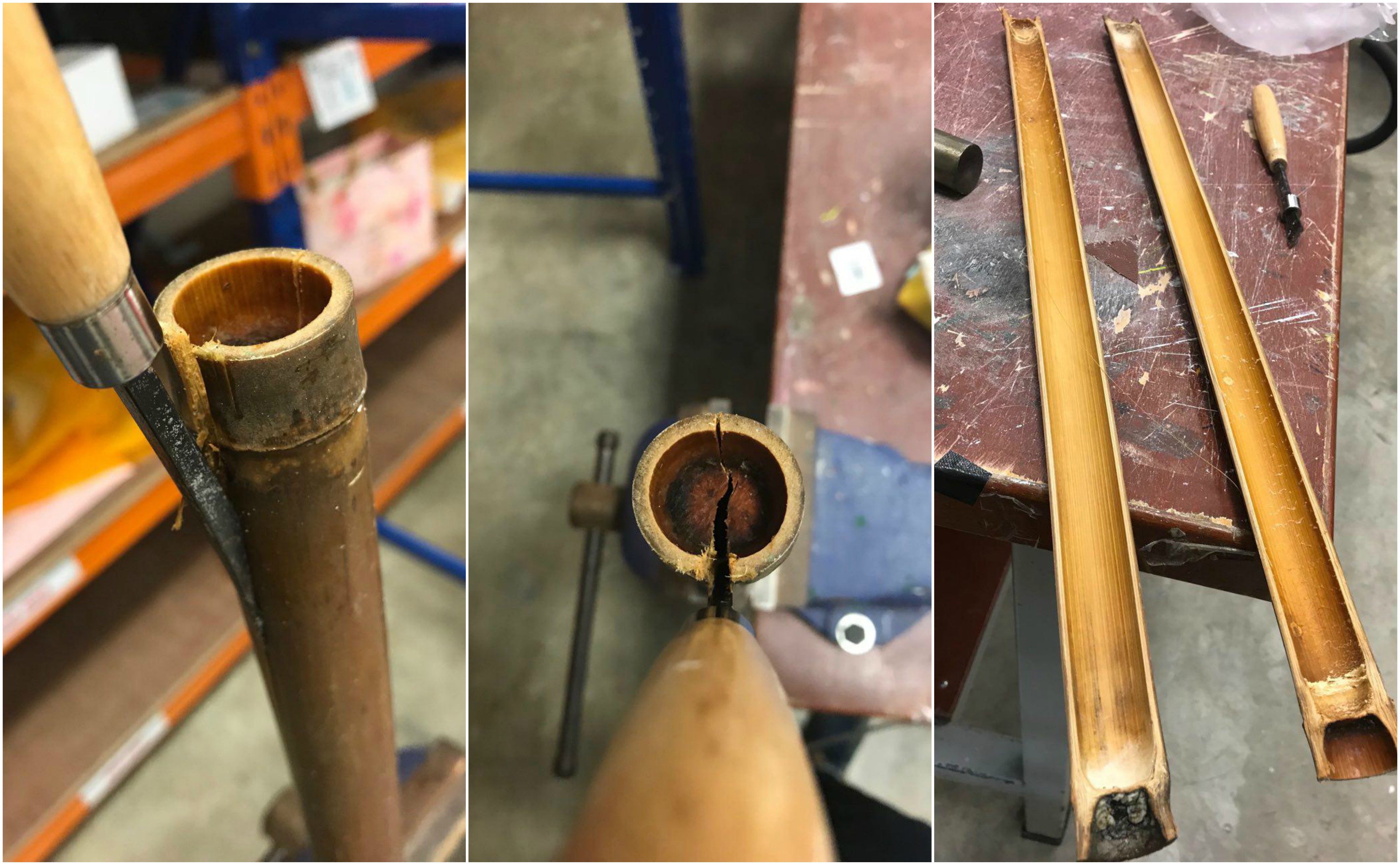 The next step would be attaching the bamboo to the back plate. We drilled holes into the bamboo and threaded a string through it. 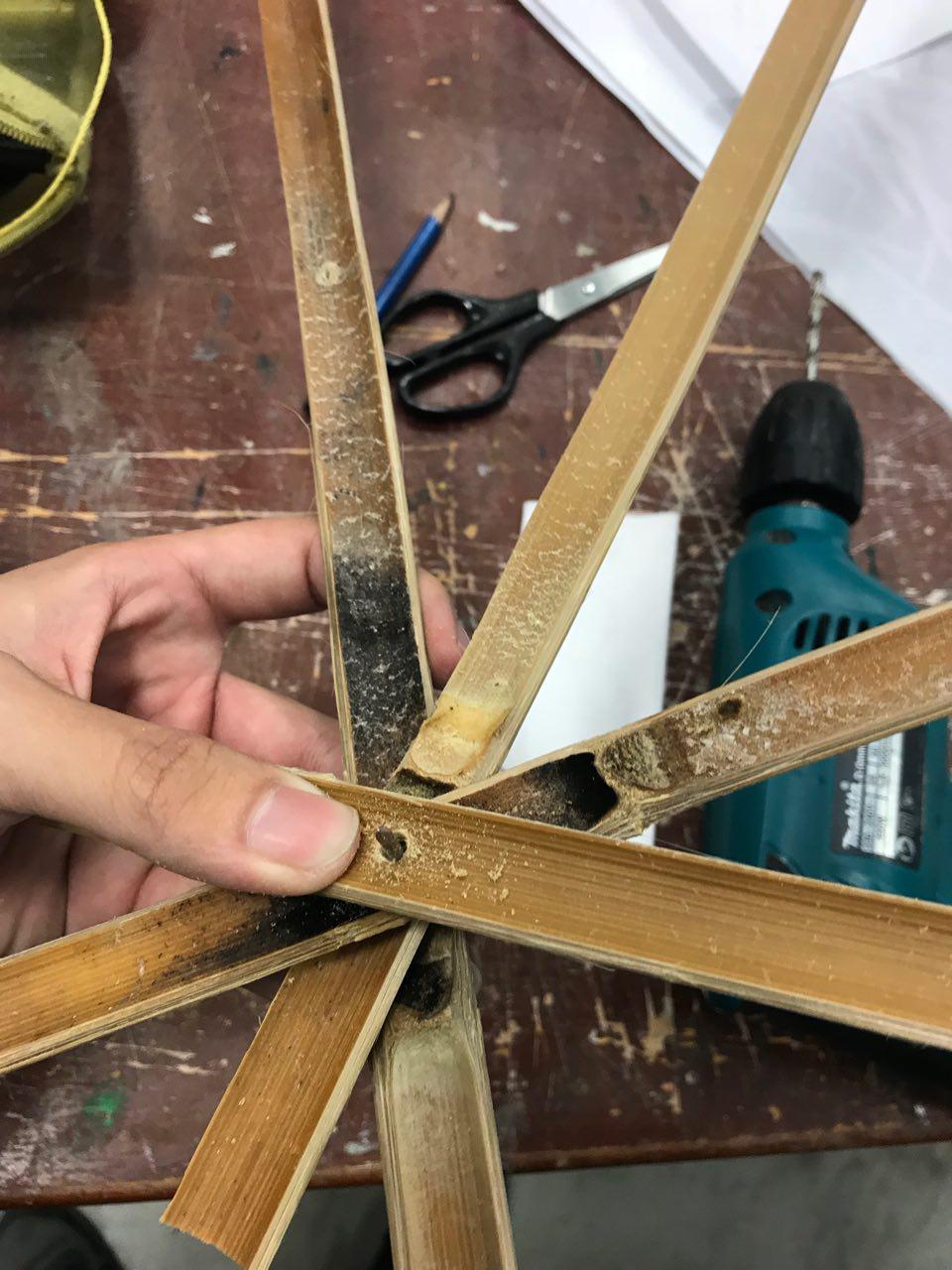 The main issue we faced was attaching the paper to the bamboo poles. We experimented with variety of adhesives to stick the rice paper. Initially, we used white glue mixed with water to stick two sheets of paper, unfortunately the result was ugly as pockets of air was trapped within the sheets as it dried unevenly. 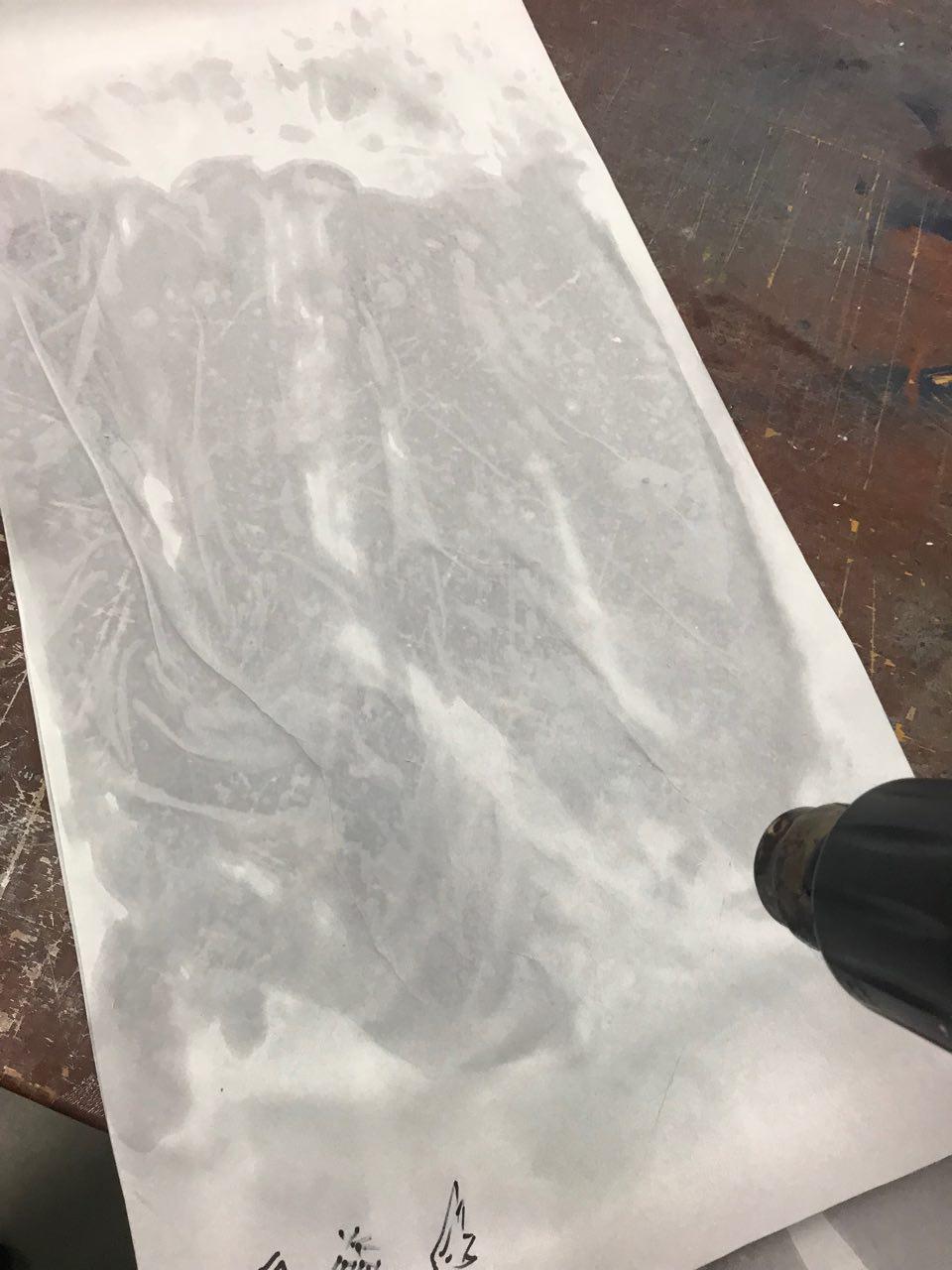 In the end, we found out that double sided tape works best for this case as it prevented the paper from crumpling, and it was neat as the tape was not visible after we pasted the paper. 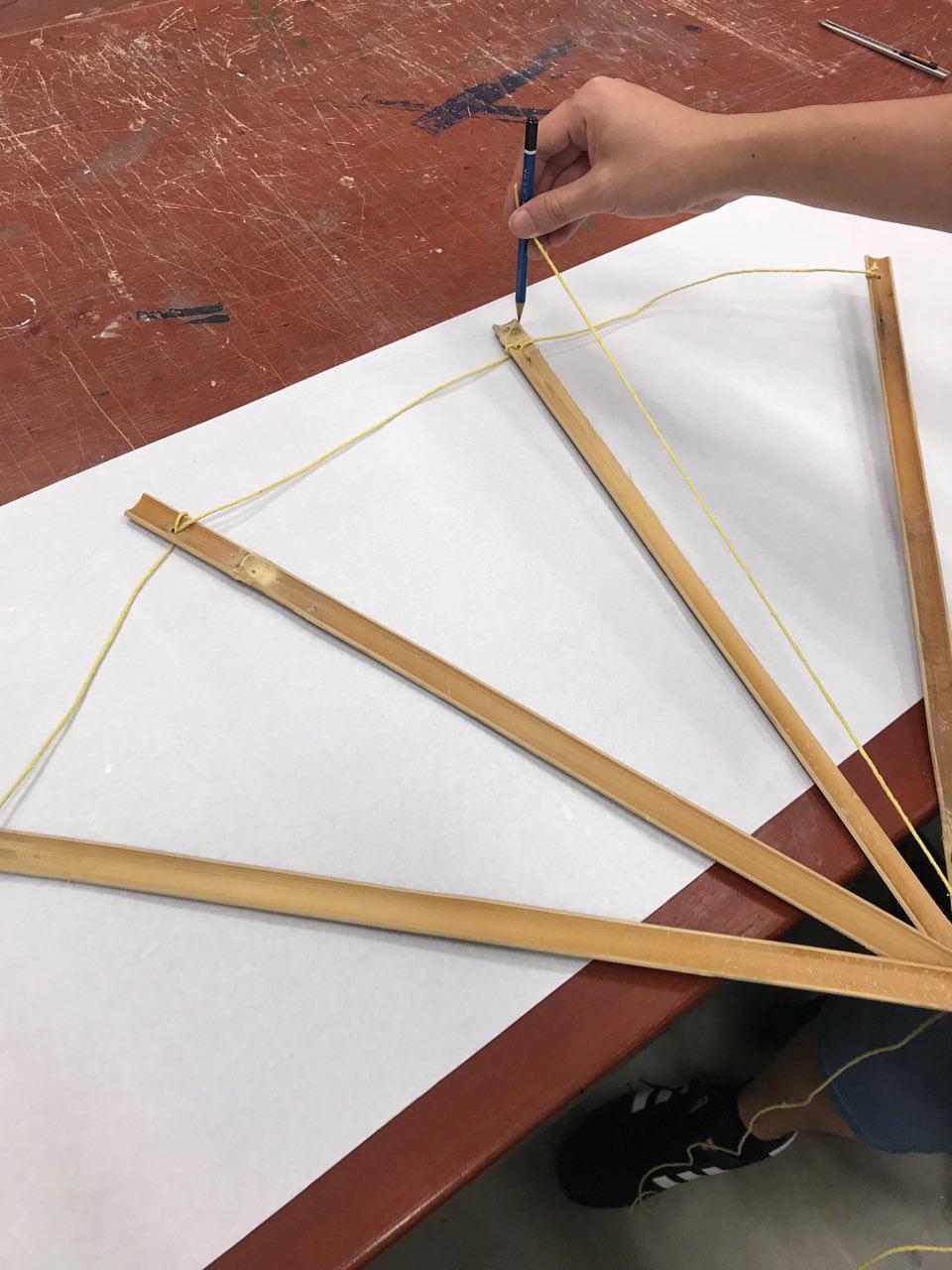 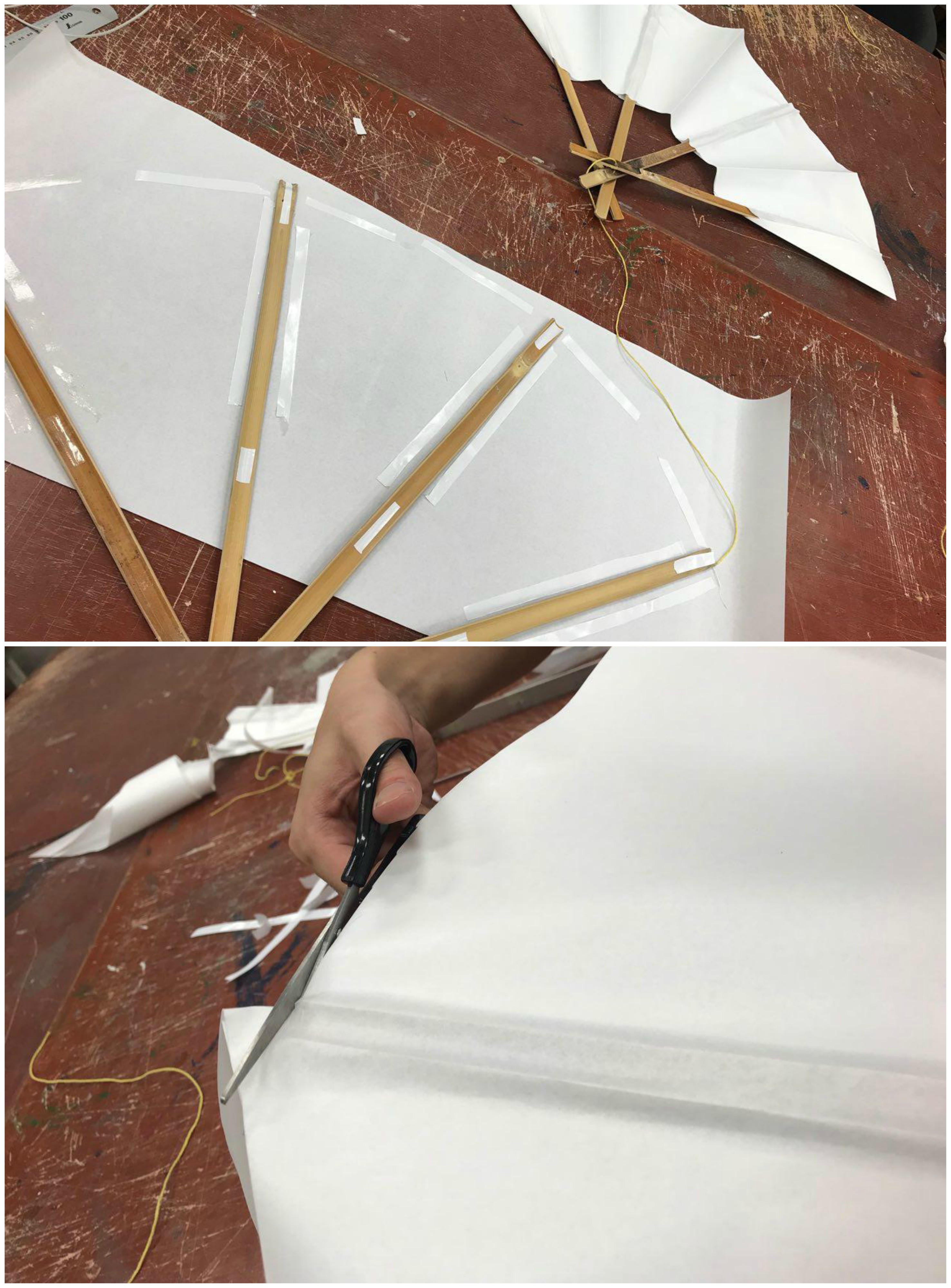 Here are just some pictures of us measuring and ensuring that the paper is of the right dimensions. We used a string to make an outline of the path we had to cut along. We paste double sided tape onto the bamboo as we wanted to capture the structure, especially the curvature.

Prior to comments given to us by Cheryl, we thought it would be a good idea to cover up the back portion of the winged suit to make it more aesthetically pleasing and minimal, thus, we attached a second plate on the back.

We added Styrofoam blocks to ensure that the back plate does not completely fold onto the bamboo structure, crumpling the paper and also preventing the wings from fully closing. 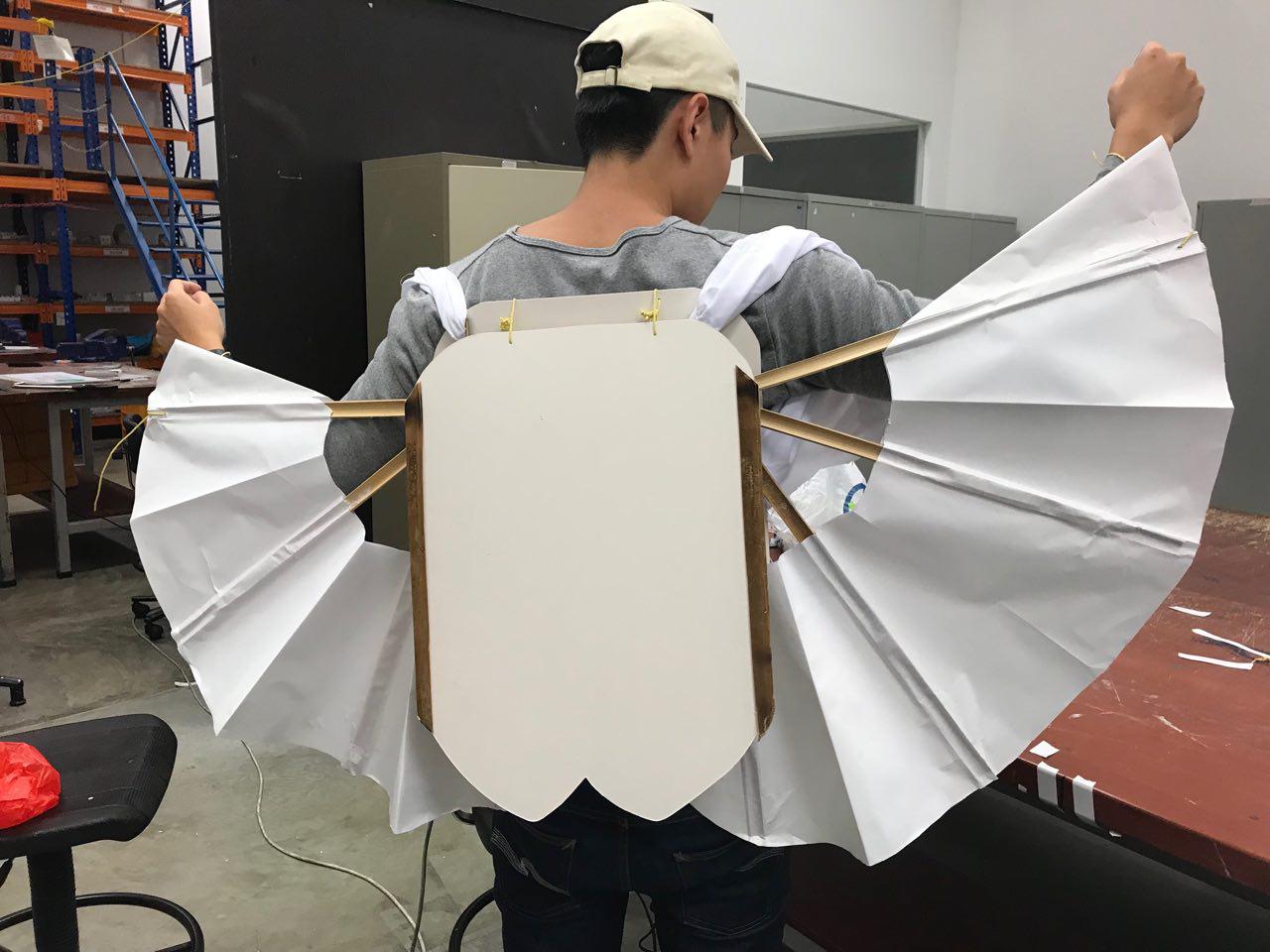 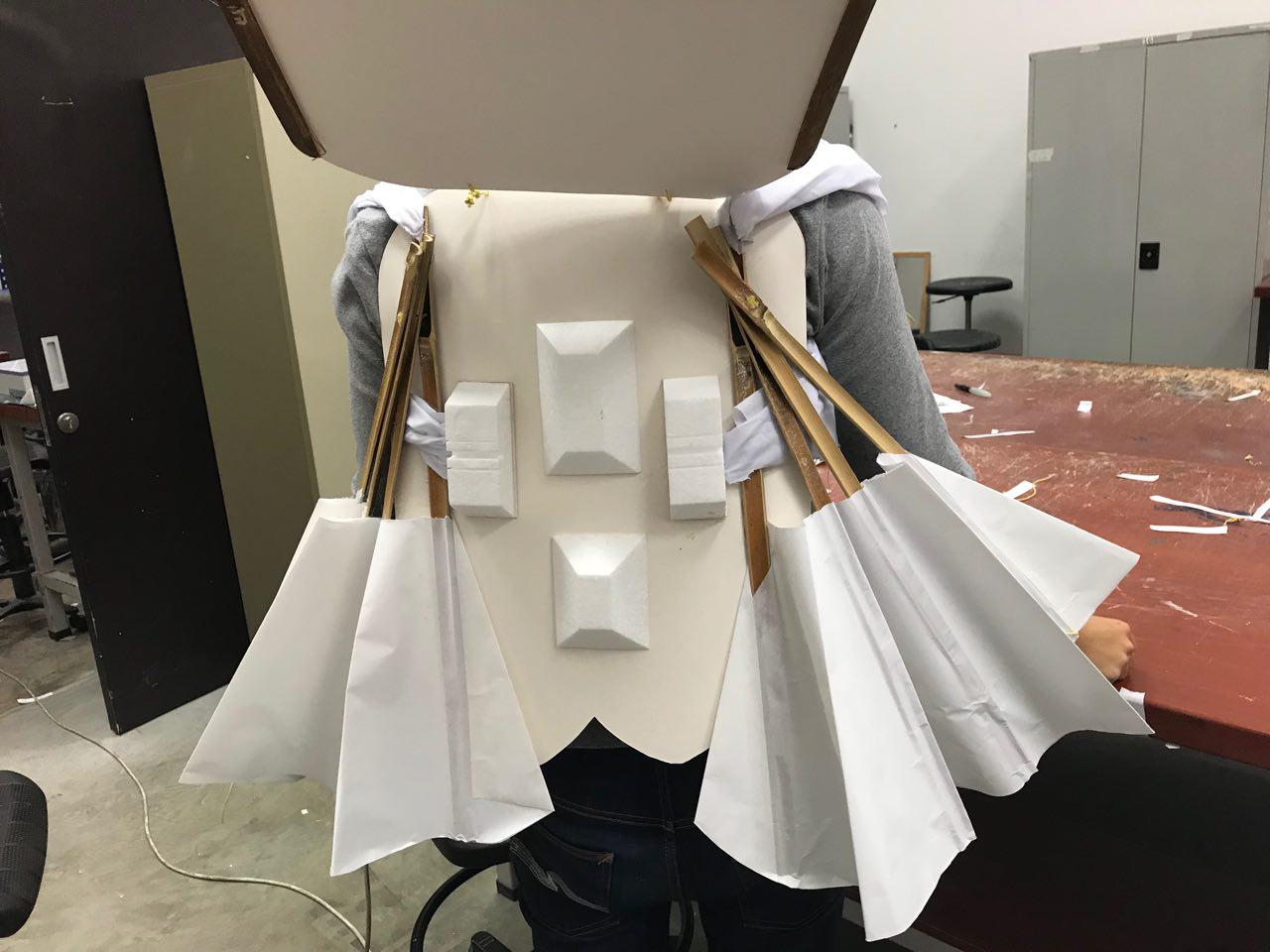 The final touch would be adding the 風! Since our model is based on a bird, and Kokopelli’s instrument is a flute, we thought it would be apt to include it in the overall design! 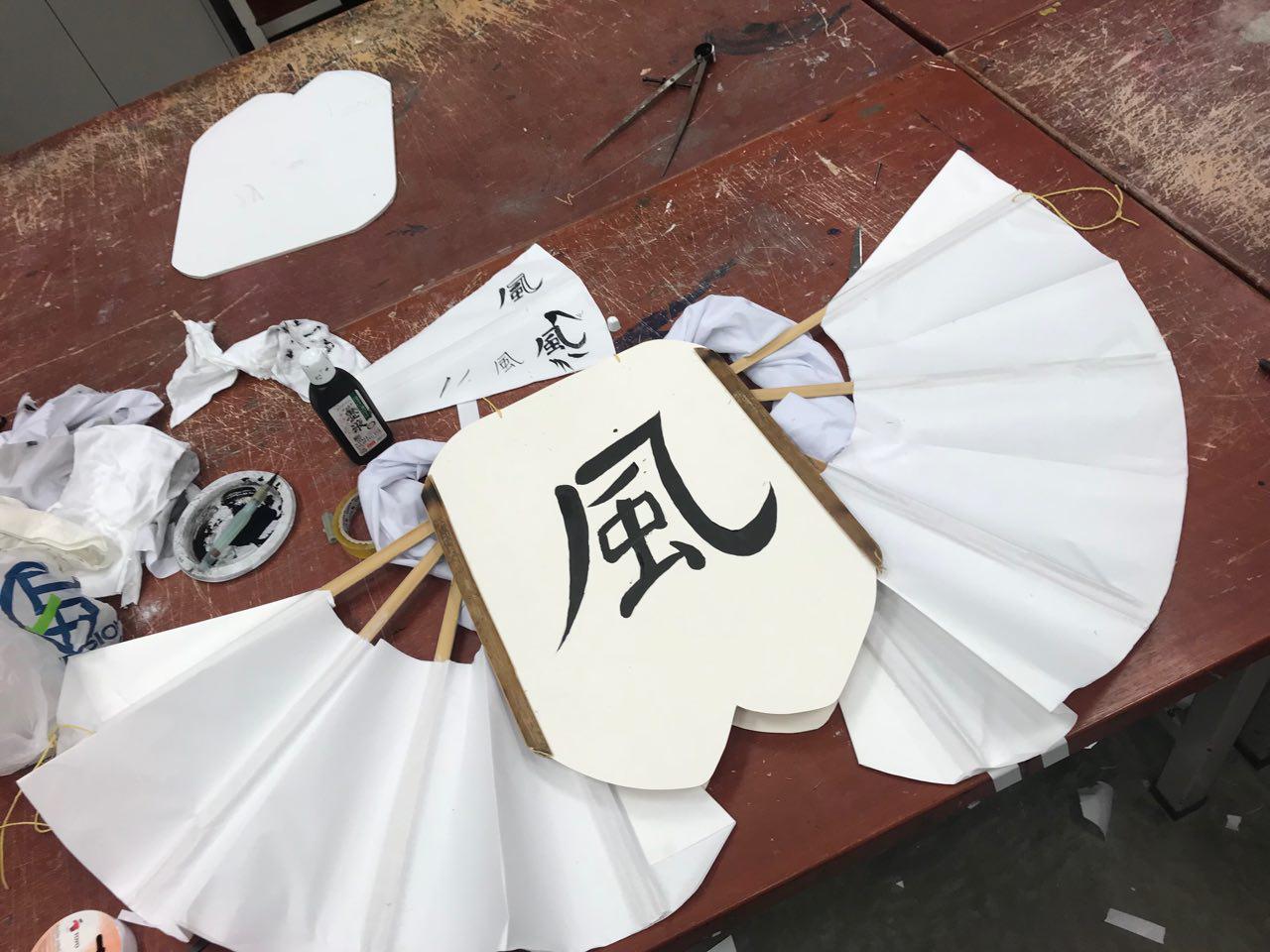 (End of Part One)