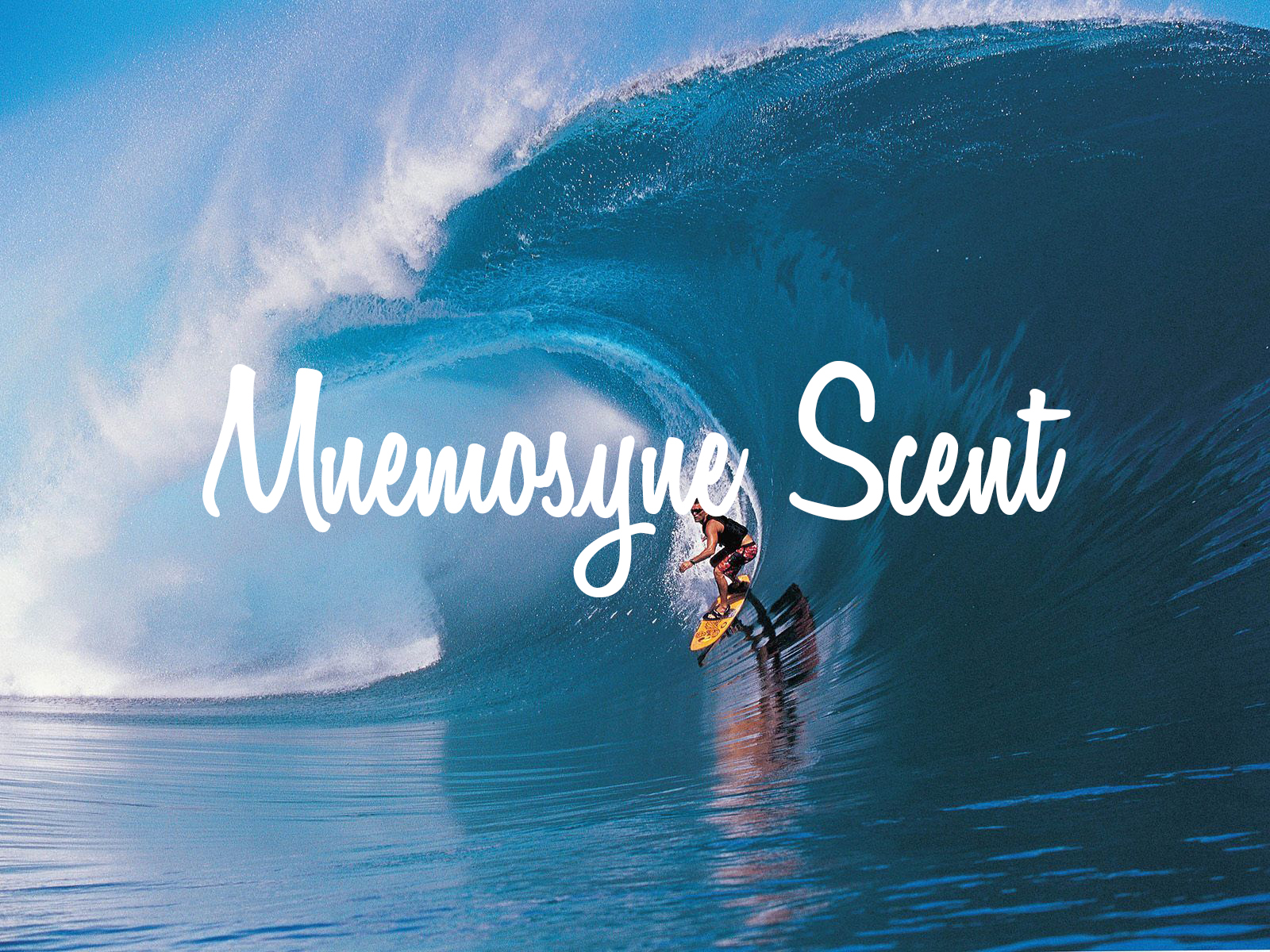 For this project, I was lucky enough to have Hannah as my group mate!!! We share many similar interests, one of them being our love for water.

Hannah and I decided the good scent to be the smell of chlorine as we both enjoy being in the waters. Me swimming, and her surfing at Wavehouse. You can refer to my previous Mnemosyne post to read more about my relationship with chlorine!

We started to break down the elements of chlorine, and what we would use to represent them.

We start off with the scent of chlorine. It has a very sterile scent to it and you would often associate it with cleanness. Therefore, we wanted to use a material which was translucent.

Secondly, the smell of chlorine is distinct as the top note pierces your nostrils. This is also accompanied by the pain you feel when you open your eyes underwater and the chlorine stings your eyes. This was why we wanted to have sharp edges in our composition.

In contrast, our bad scent was the smell of rain, especially when it hits pavements and roads which gives off that humid and musty smell. We also associate this smell to bad experiences in our lives.

Back in secondary 2, I broke my arm riding a skateboard. This resulted in my arm being in a cast for about 6 months (sadly, I do not have any photos of it). Every time it rained, the bones in my left arm would ache, causing me distress. 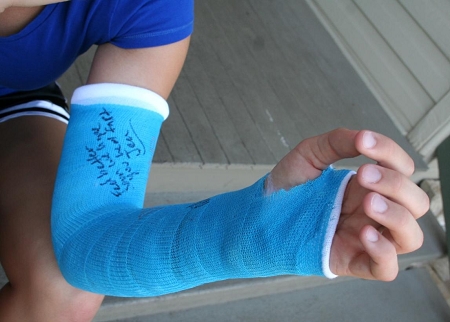 We also started to think of how rain interacts with its surrounding, cascading off buildings and cleaning its impurities, which makes rain murky.

To replicate this feeling, we wanted to have dull/dirty colours to represent rain, as well as a more matte finish for the object representing rain to show a contrast between the smooth surface of acrylic and the gritty feeling of the plastic bottles. 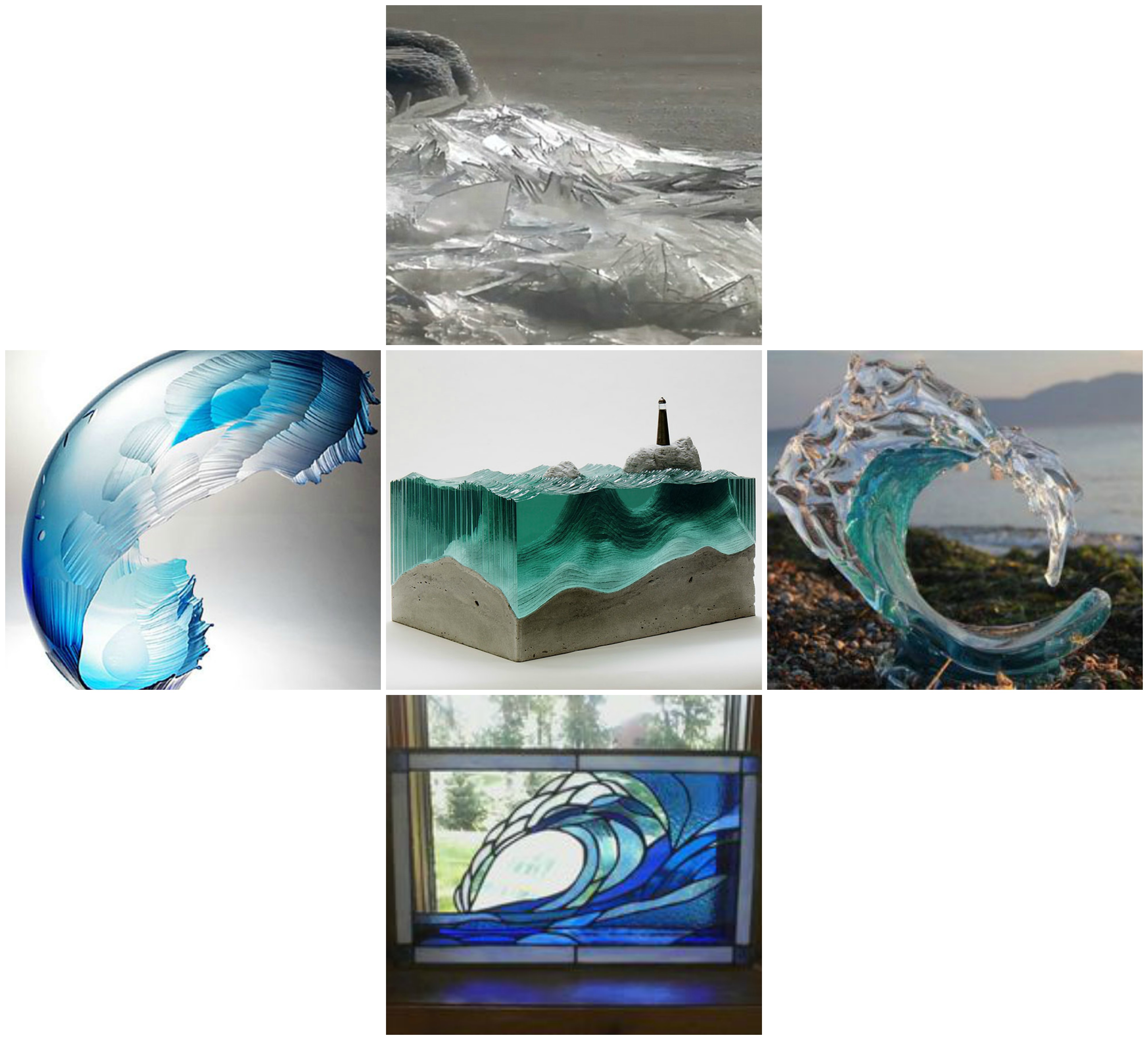 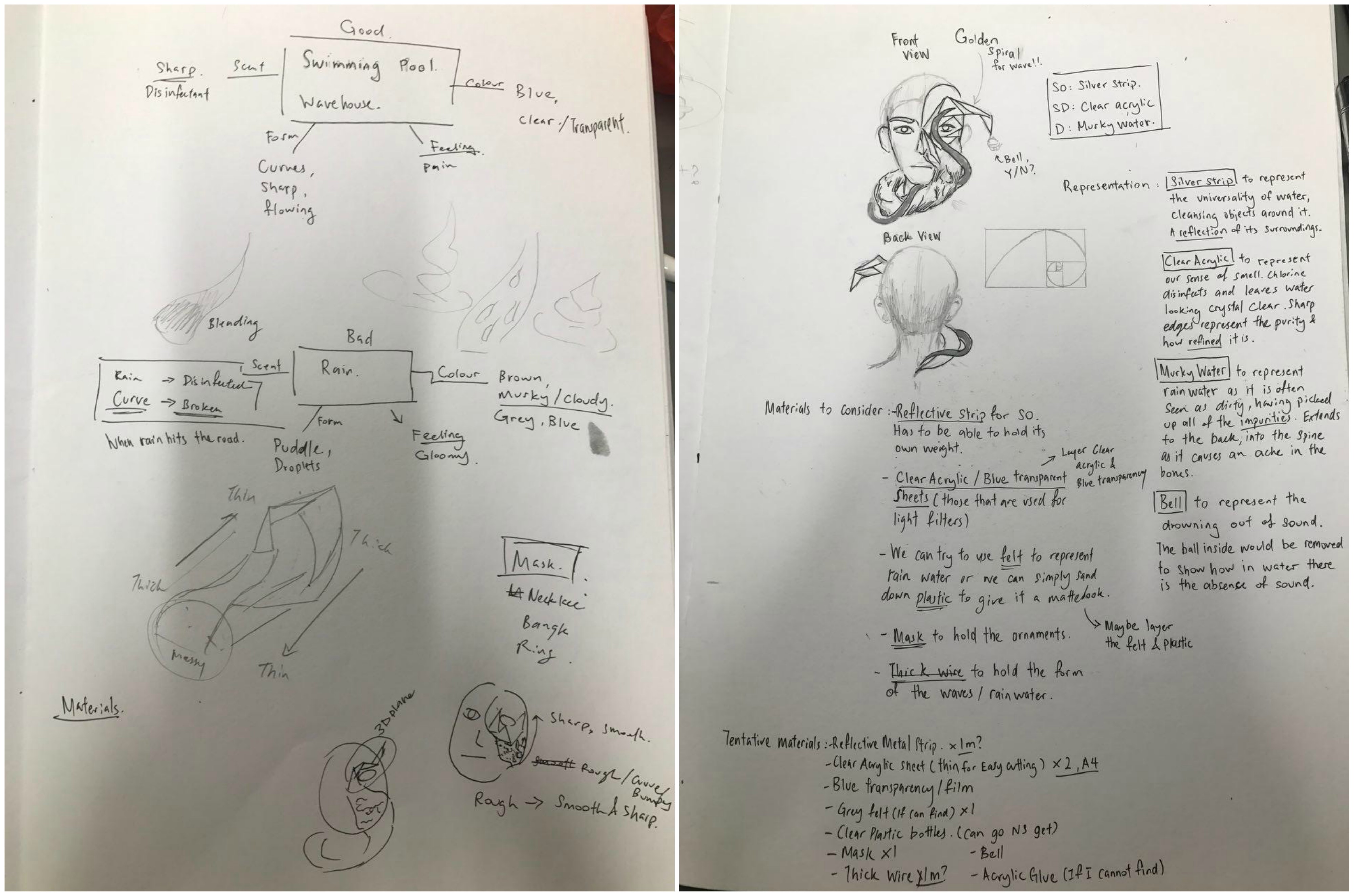 We set out on our project with the idea of a wave form in mind. As we wanted the wave to be translucent, acrylic was the material of choice. I started to search for wave forms made out of glass or acrylic so that we could emulate a similar effect onto our accessory piece.

We also searched for various types of masks and we really liked the look of the mask from phantom of the opera as you could still see the wearer’s face.

The reason why we chose a mask was because how we look like is a large part of our identity, to have a mask covering a part of your face would also mean that the object has great significance to us. 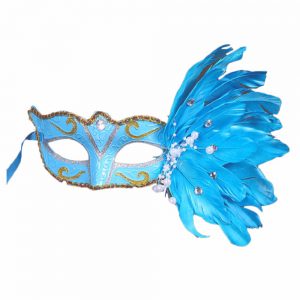 We really liked the idea of a wave sprouting out of the mask to show the dynamism of a wave.

Throughout the process, I will be going into detail on the reasons behind our various decision makings. Let us begin! 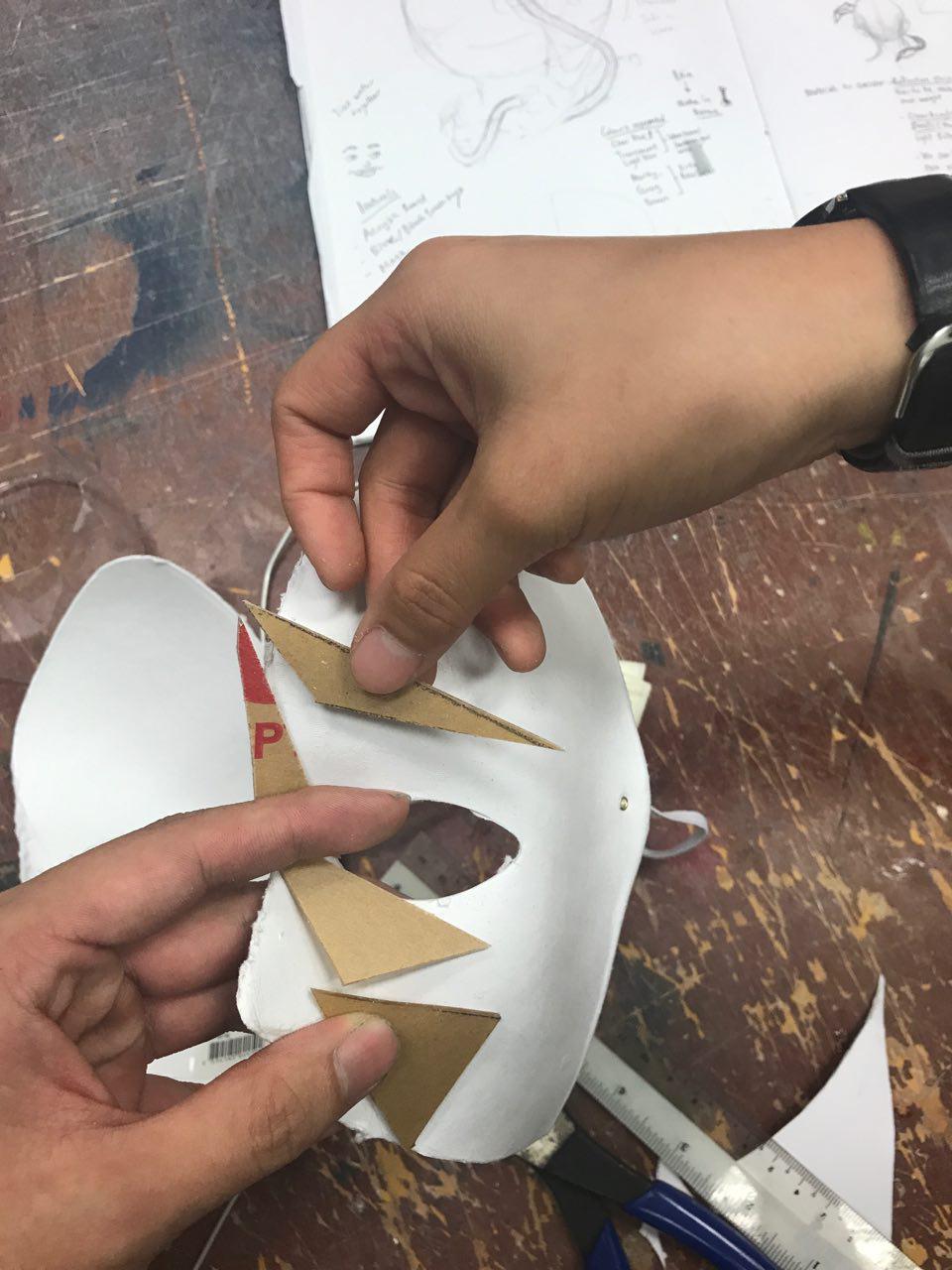 Planning how the pieces would fit together. Initially I went with a more flat approach of sticking the pieces by just following the  contours of the mask. However, Hannah pointed out that this would not make the piece dynamic and interesting to look at. 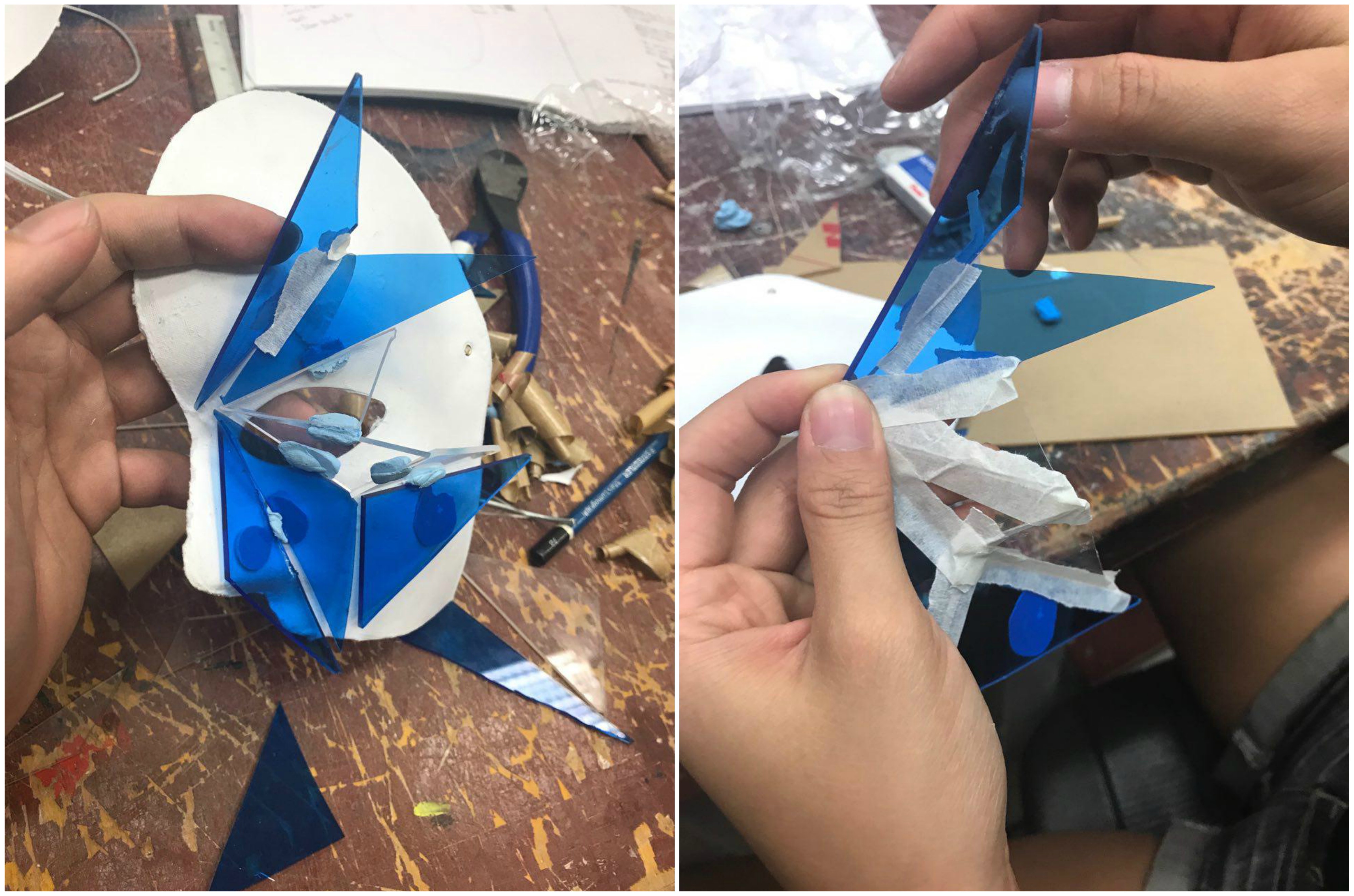 We then went with the approach of having the pieces jut out. To hold them in place, we used blue-tac initially. However, this soon became a problem when more pieces were added. We moved on to masking tape after that and it managed to hold its form much better. 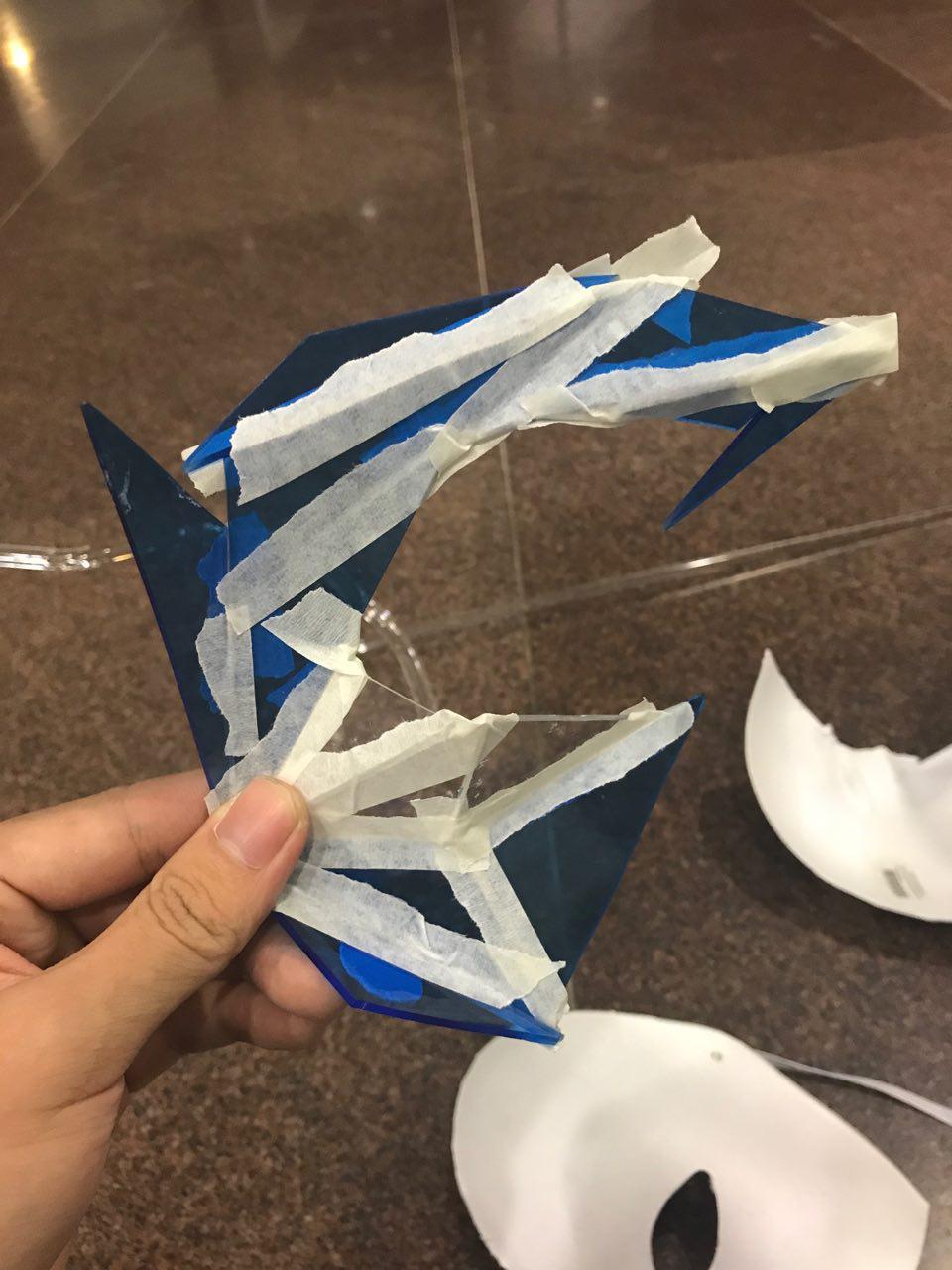 Yay! This was the structure we settled on after trying to fit the pieces of acrylic to form a good composition!

Little did we know, that it was the beginning of our nightmare. 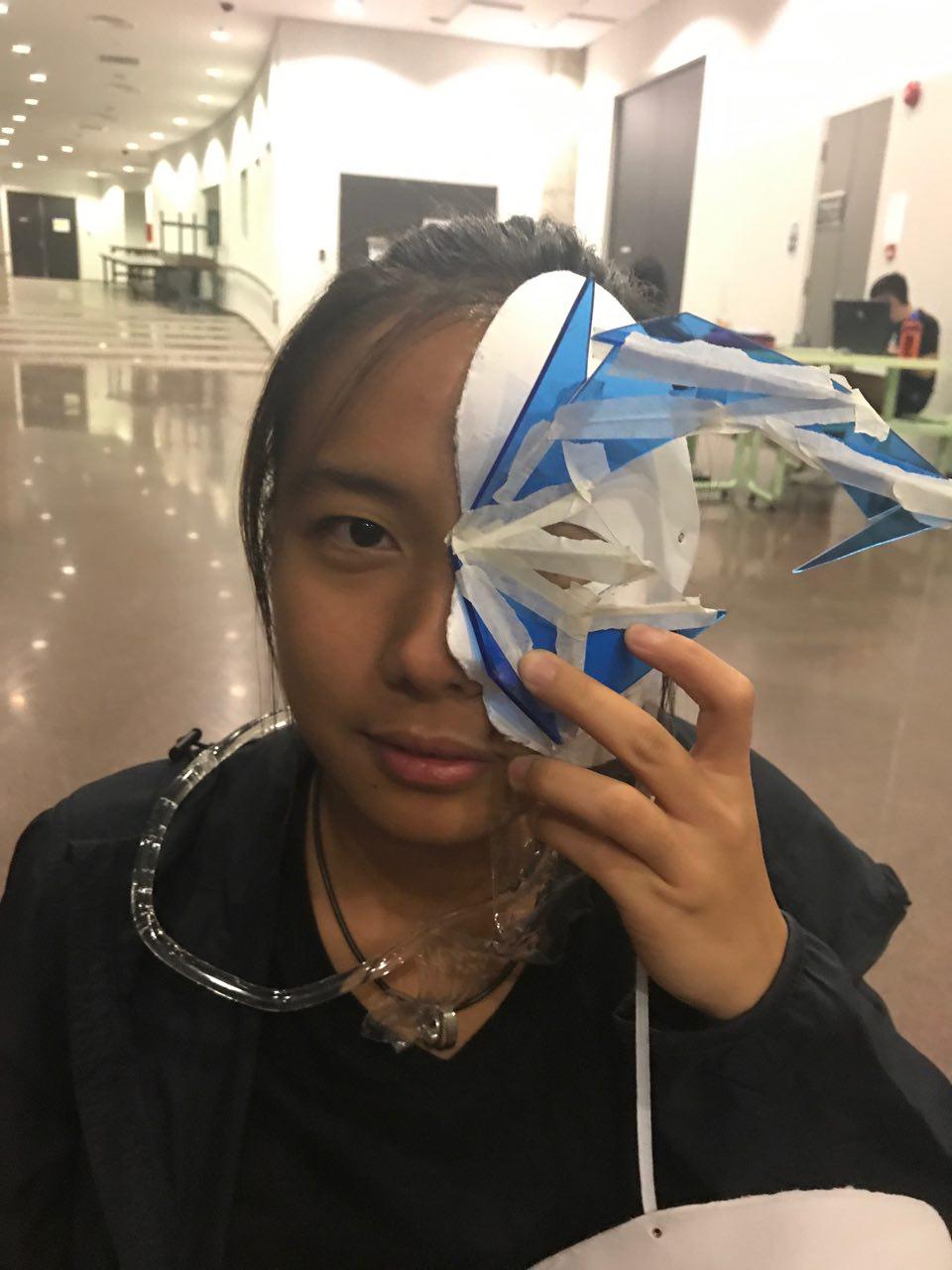 We began to glue the pieces of acrylic together. However, because there were so many individual pieces, it became apparent that this would be a very long process because we had to hold each piece in place till the glue dried (it took forever). 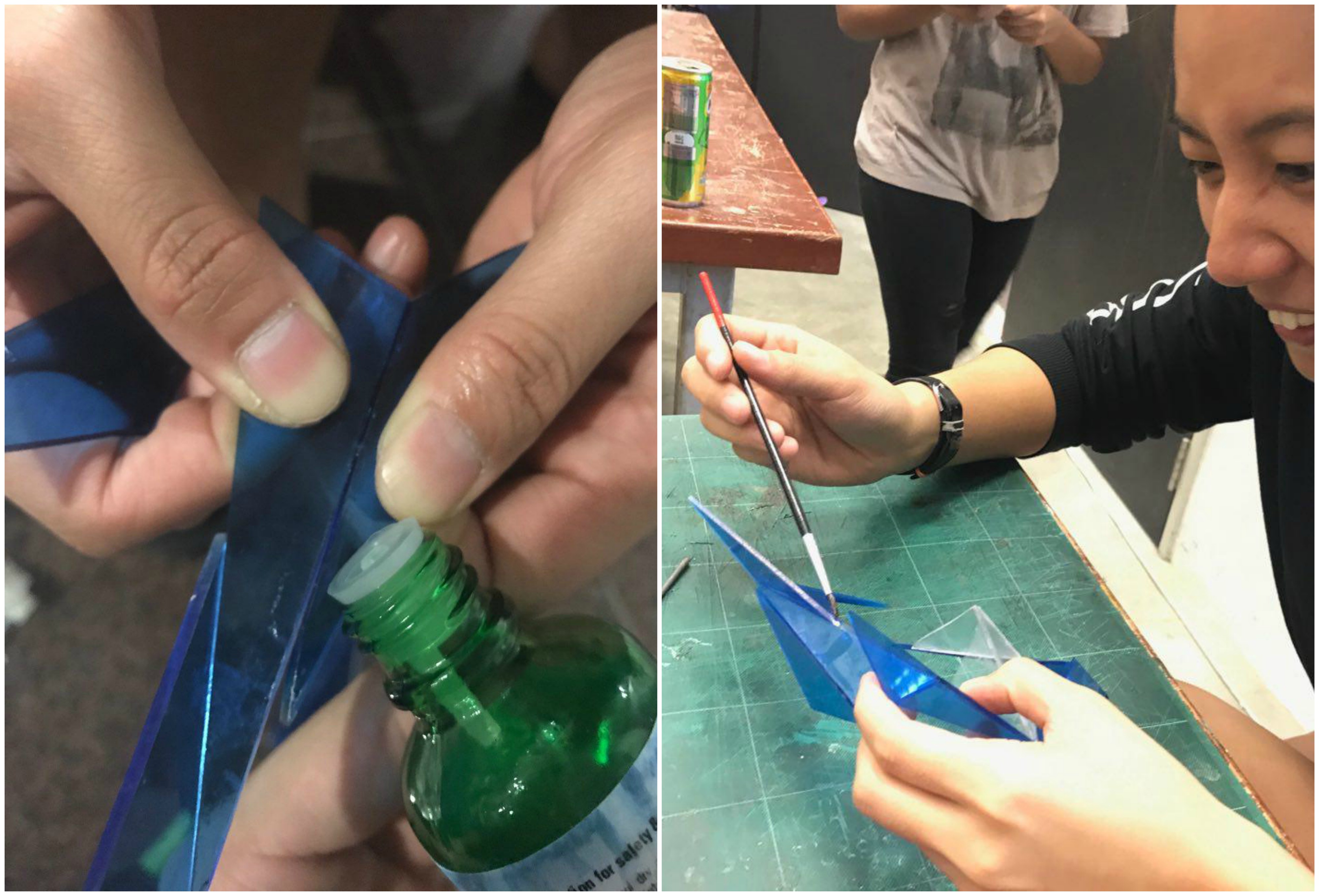 We even went to the extent of using a heat gun to try and speed up the process. However, that didn’t work which is why we went back to using acrylic glue. It also smelled really bad which explains Hannah’s face. 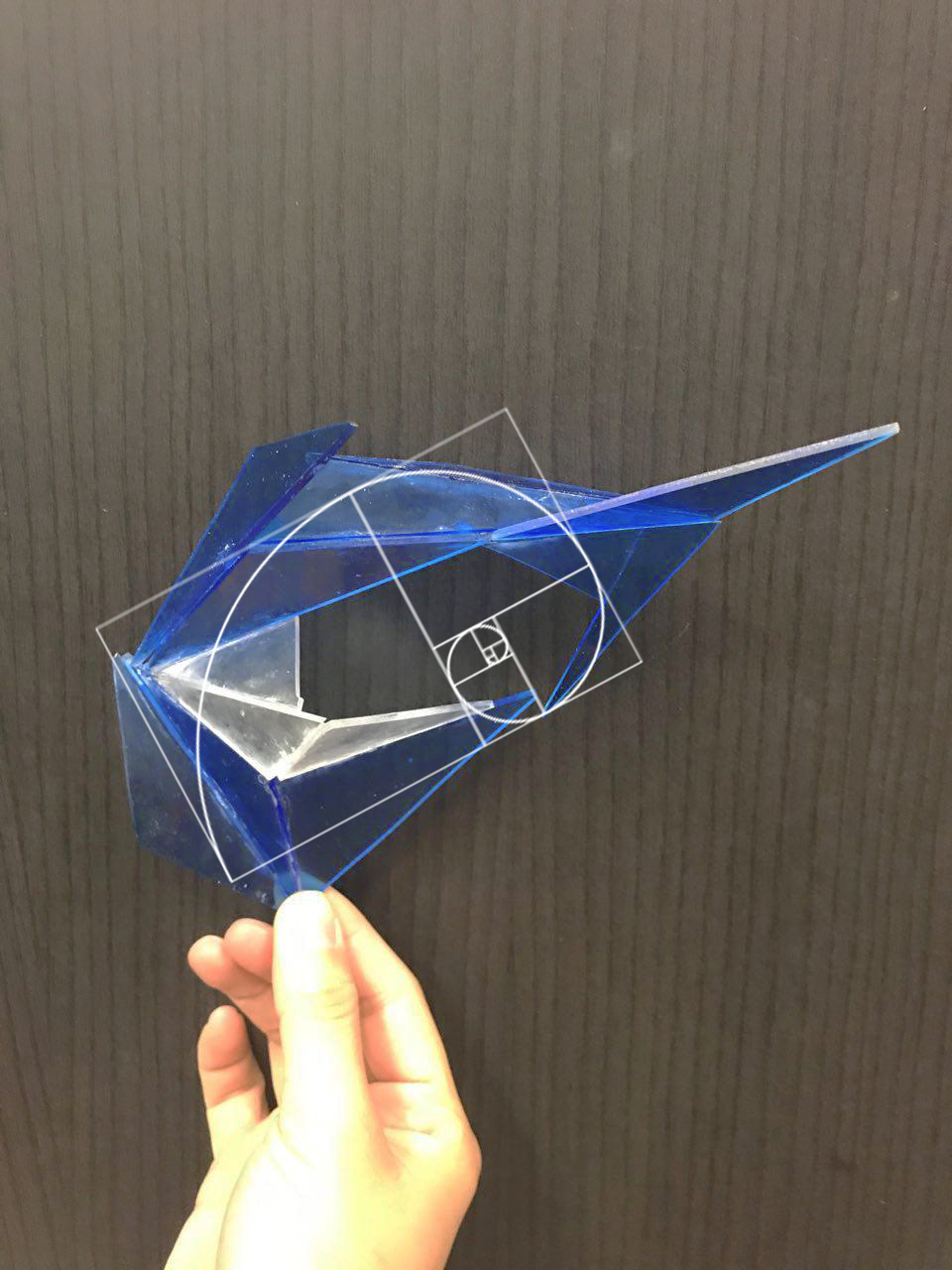 We incorporated composition elements such as the golden ratio to form the wave so as to make it more pleasing to look at. We used white shards to represent goggles as it allows you to see underwater.

We also made some adjustments to the mask by cutting away the forehead segment of it as we realised that the white portion of the mask was distracting and took attention away from the wave. 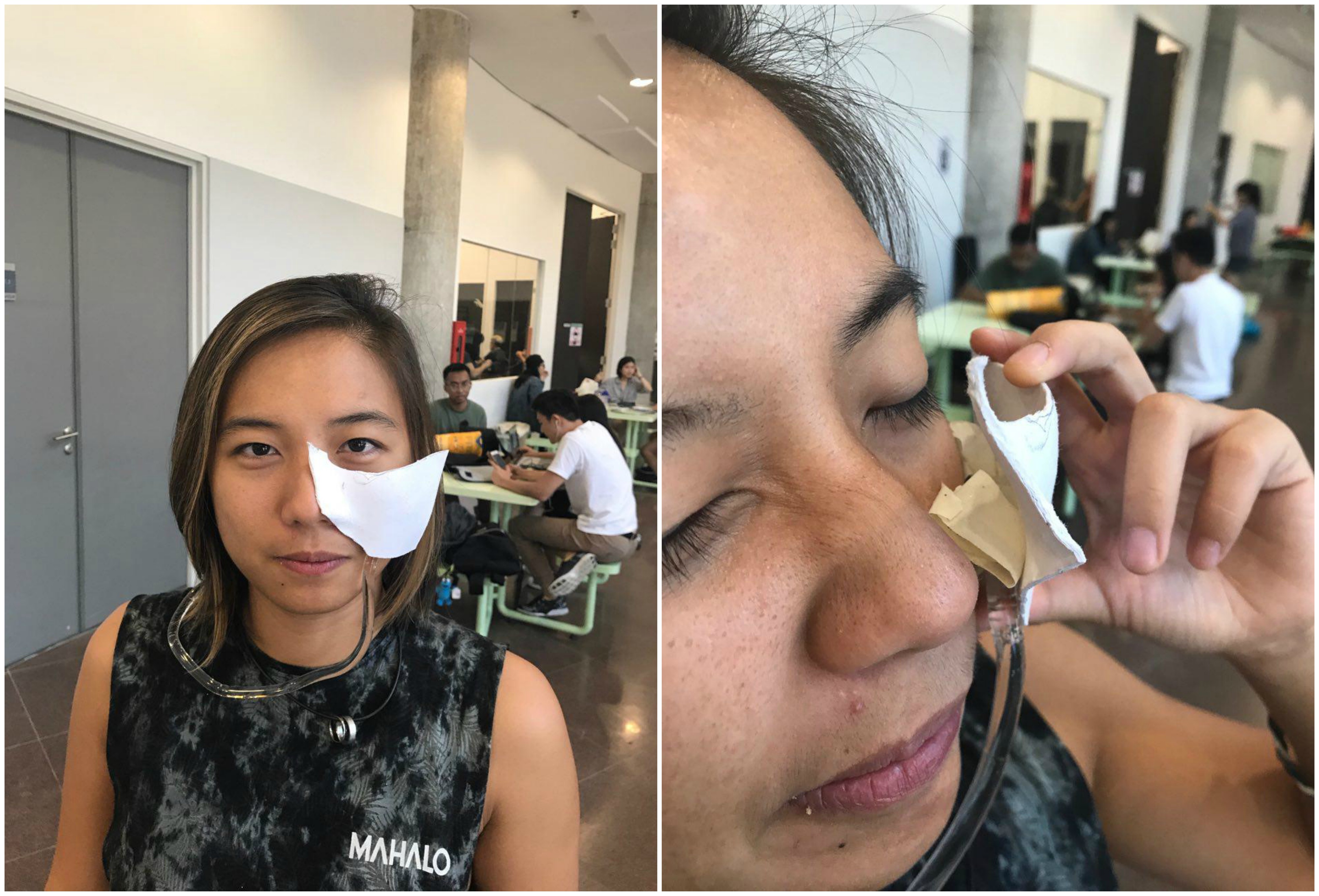 We also used a heat gun to bend the acrylic tube to fit on Hannah’s shoulder. Unfortunately, we did not take any process shots for this part as Hannah was busy working on the Jig-Saw cutting up the acrylic pieces while I was bending the acrylic tube.

The next step was to create the object which represented rain. This was made using plastic bottle scraps. I cut long strips of plastic bottles and I used the heat gun to get them into a more organic and random shape, resembling the cascading of water. 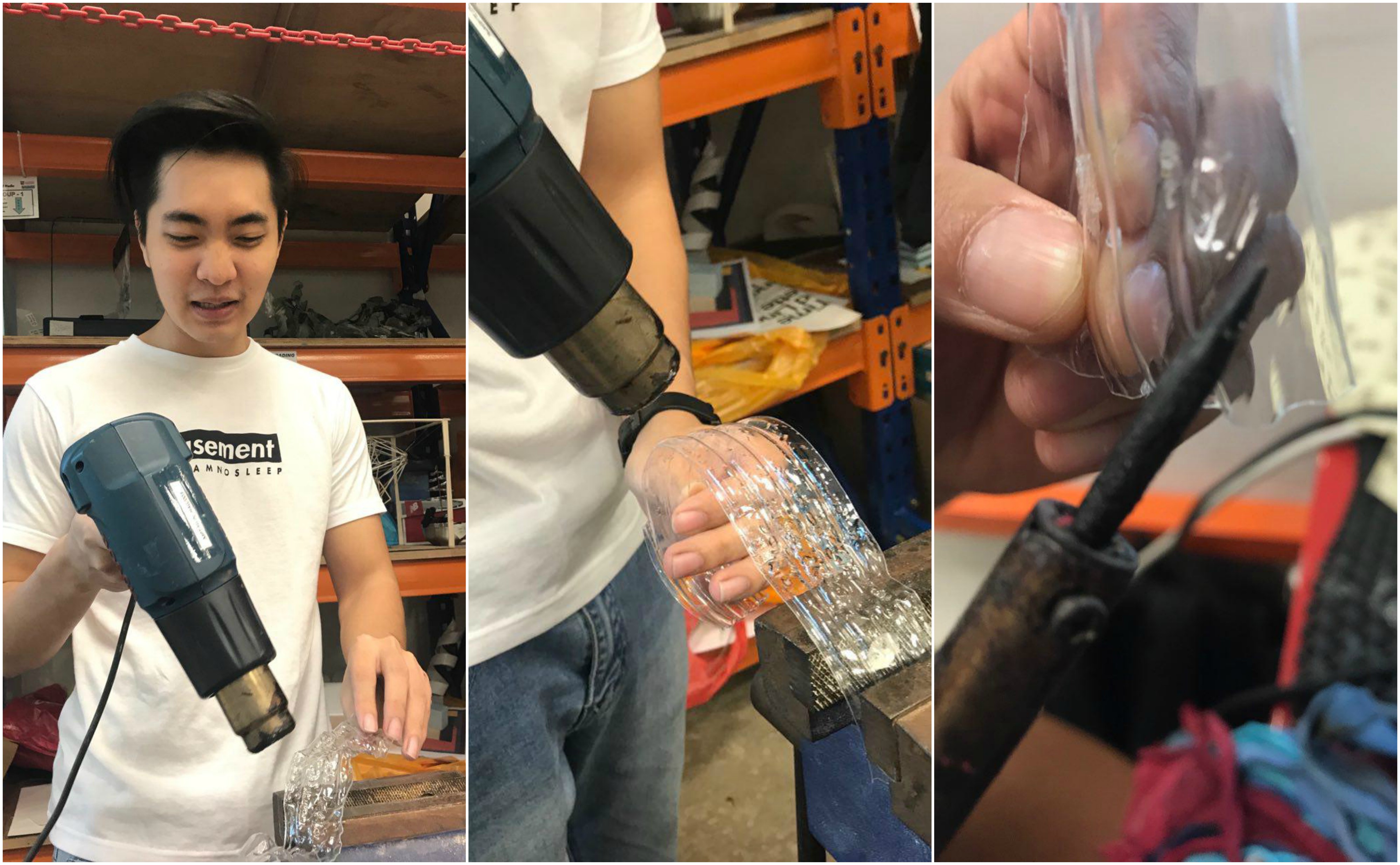 I used the soldering rod to melt the plastic bottles together instead of using a hot glue gun to stick them together as the glue gun would be too hot and further distort the shape of the plastics.

After joining substantial pieces of acrylic together, we began to paint the plastic with grey and brown to represent impurities found in rain.

All we had left to do was attach all the pieces together and polish the acrylic pieces! In the following compositions, you would be able to see a strip of reflective metal. This is to show the universality of water and how it takes up form as well as the elements in its surrounding, therefore a perfect reflection of its environment.

Initially, it was a wide piece of metal sheet i wanted to use. However, as it was meant to be our Sub Ordinate, I had to trim it down till it was just a thin strip. We will be updating our final costume on the day of the final fashion runway! Do stay tuned for that!