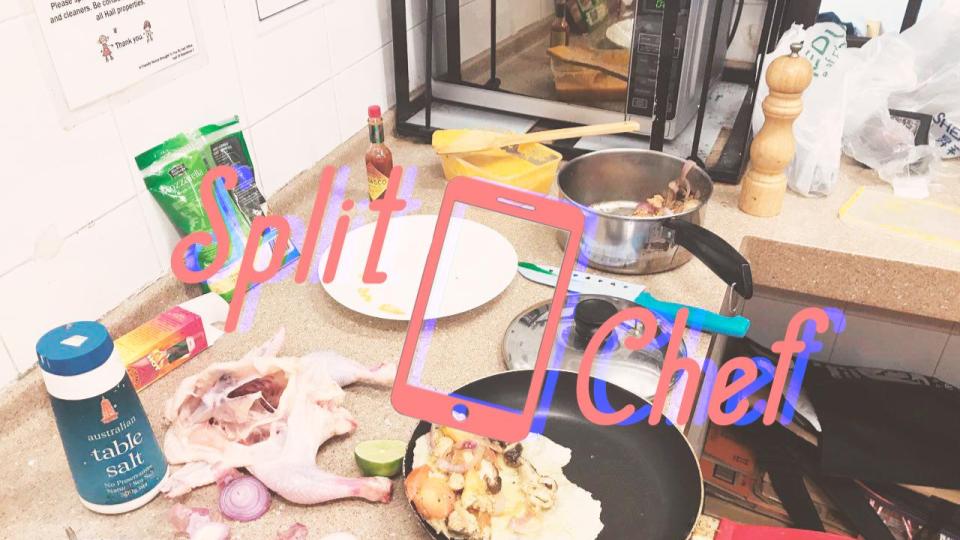 Finally! We begin the actual run of Split Chef!

We managed to highlight and tackle key issues which led to disruption of the flow in the trial run, by setting more concrete rules and choosing a better location. (All these have been covered in the previous post)

For the actual run, I was alongside Dion in ADM taking videos of the various reactions of the Artist, while she was the moderator, briefing the artist on the instructions.

During the days which led up to the actual show, Bryan created a series of banners for us to place on our instagram stories as a form of publicity, informing our followers of the game show which we would be hosting. 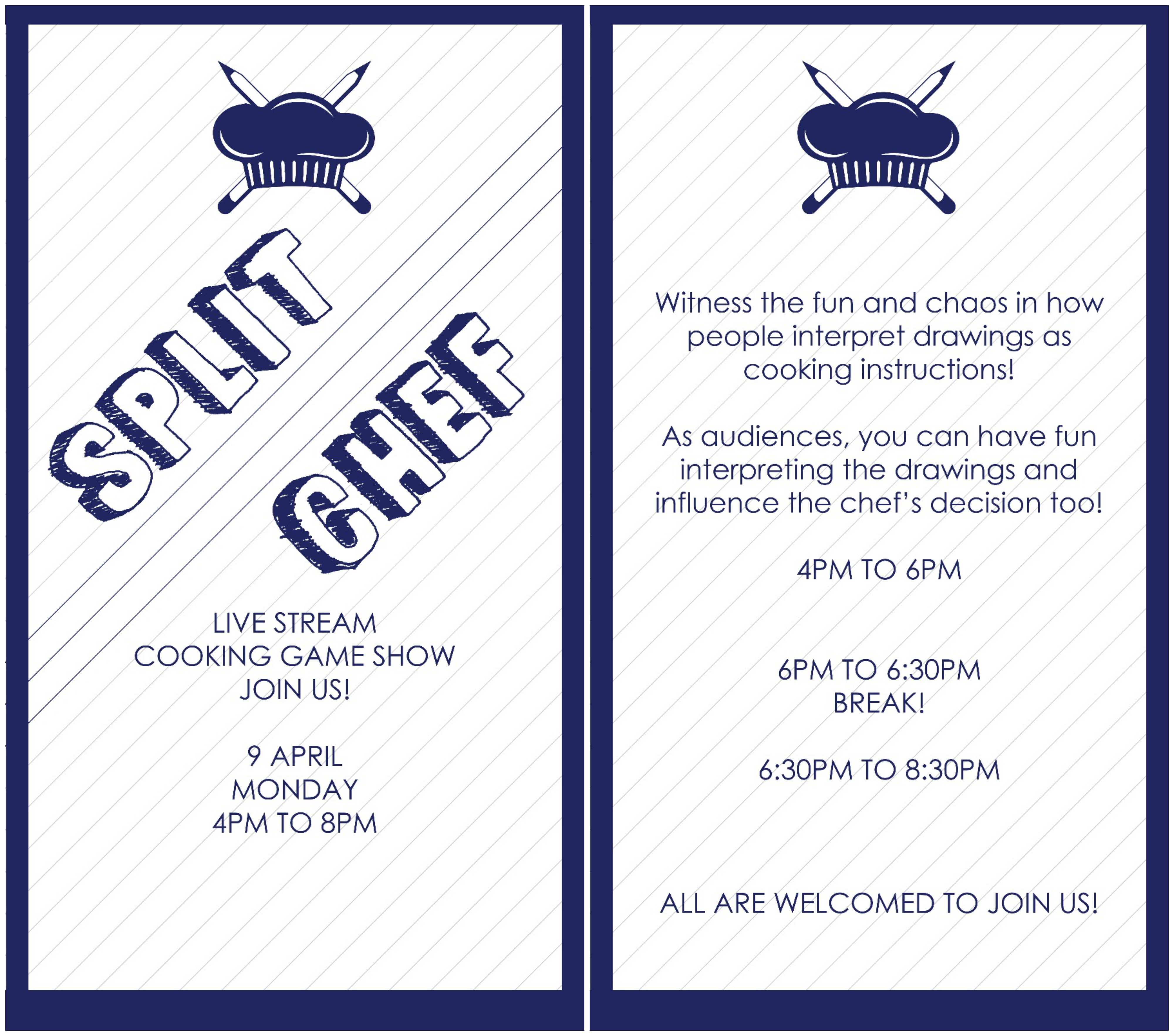 We begin with the Noobs! Where the skill level of both the Artist and the Chef is low. We wanted to see what were the limits we could push the effects of glitch to. 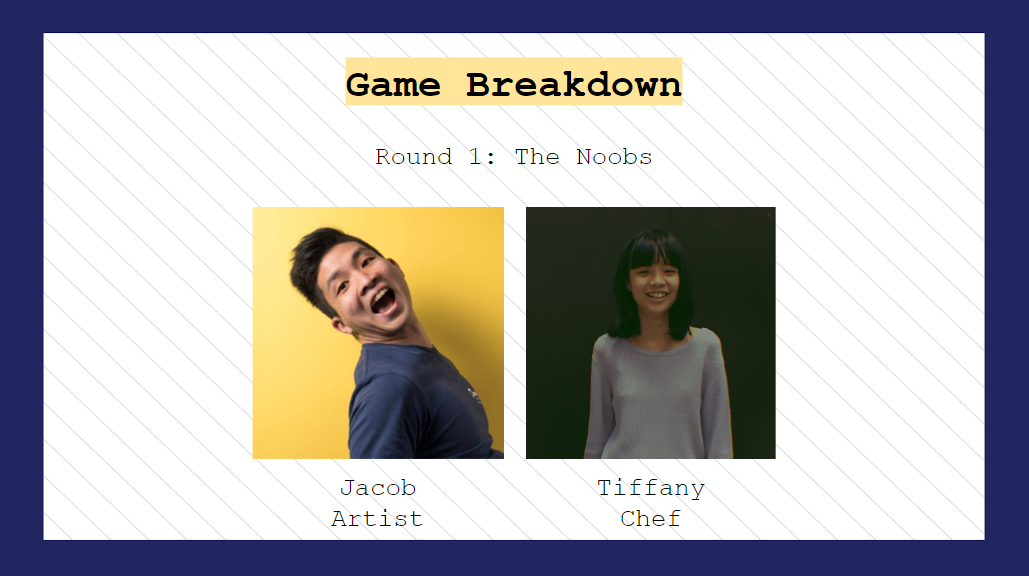 When the stream started at around 4pm, we had a steady number of audiences, hovering around 10-14 viewers. As these people were engaged from the start, they had a better grasp of what our game show was about.

They were able to participate more actively, potentially influencing the decisions made by the Chef when choosing the ingredients, which is argueably the most critical segment of the game as it determines the eventual outcome and aesthetics of the dish. Audience participation was crucial in keeping our game show interesting as they are able to interact with each other as well as play along, bouncing opinions off each other, creating a third space environment similar to shopping with your friends!

During the selection phase, it was difficult for Dion and I, along with the artist to keep our opinions to ourselves. We would groan or express confusion when the chef picked out a different ingredient which we had in mind. This may have changed the outcome of the dish, but in hindsight, I do not really think I made a difference.

What the Chef bought (In order of images):

What was in the recipe: 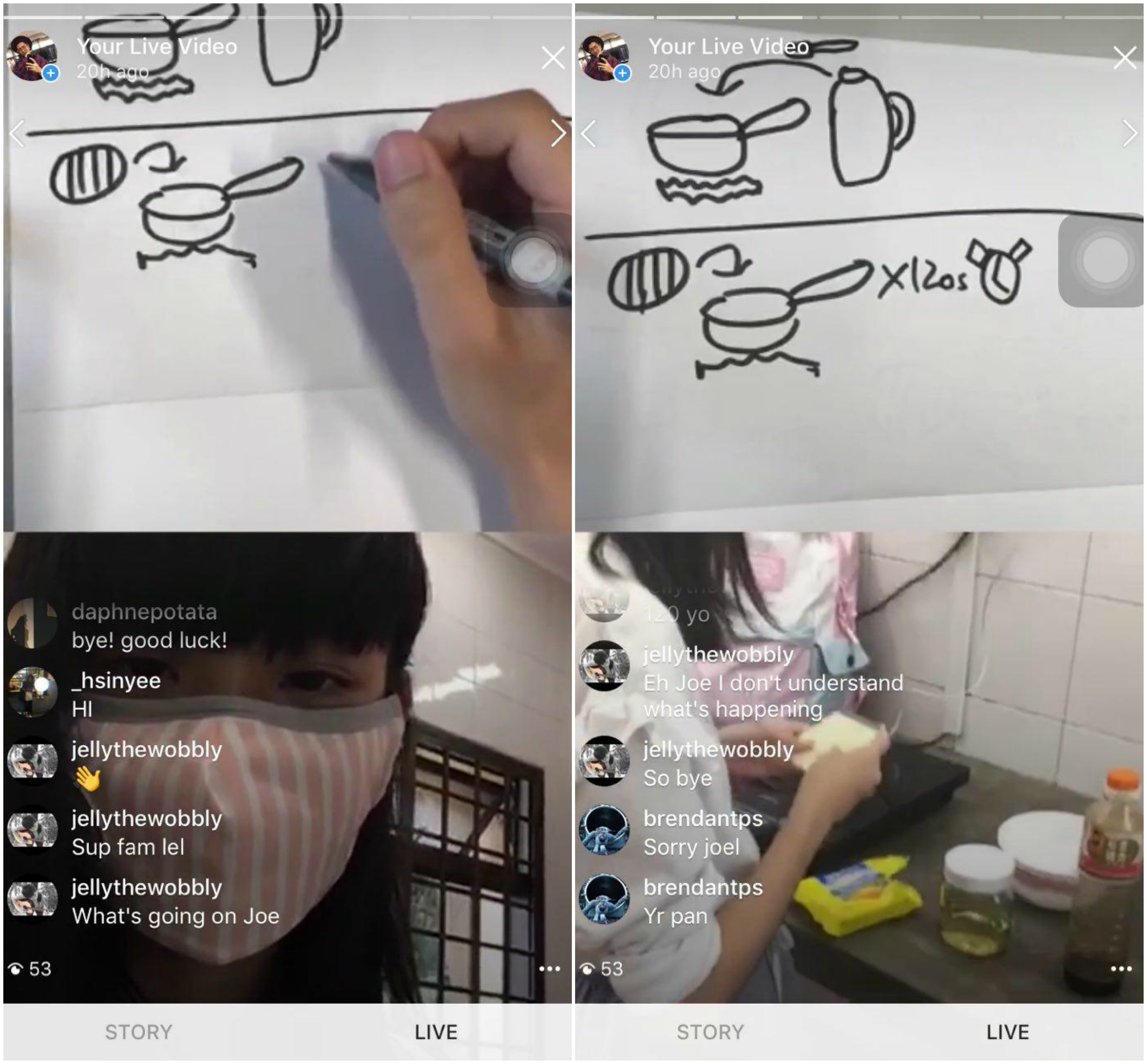 Connection was difficult to maintain within the supermart as the deeper you went in, the less reception there was for the stream, resulting in very choppy video quality.

Because of how differently Tiffany interpreted the ingredients, we decided to give her a chance to see which ingredients she would like the Artist to draw again, in hopes that she could at least get some of the main ingredients correct. To our dismay, she did not want to change anything. (Jacob, the Artist, was profusely apologizing and trying to convince the chef to let him re-draw some of the ingredients because he felt terrible)

Another unforeseen circumstance was the fact that we were not allowed to film within the supermart. Due to the constant reminders by the staff, it added another element of urgency and stress for the Chef as they had to pick out ingredients under pressure!

The numbers started to dwindle as we entered the cooking phase whereby the time given to draw the steps became extended from 7 seconds to 40 seconds. Due to the wait, the audience did not feel as engaged in the game as before. Another glitch faced by the audience and the Chef was the difference in ingredients bought – thus, the envisioned outcome of both parties would be different, which may have resulted in the audience not wanting to participate anymore as the dish would not be of their expectation.

Initially, Dion and I were contemplating changing the recipe to fit the ingredients the Chef bought, however we felt that the full effect of the glitch would be disrupted if we just changed the variables as and when we like. During this phase, our expressions towards Tiffany’s cooking became more exasperated as we only realised how different the outcome was going to be, as Tiffany did not get a single one of the main ingredients correct, coupled with her lack of cooking intuition, it was a concoction of disaster. 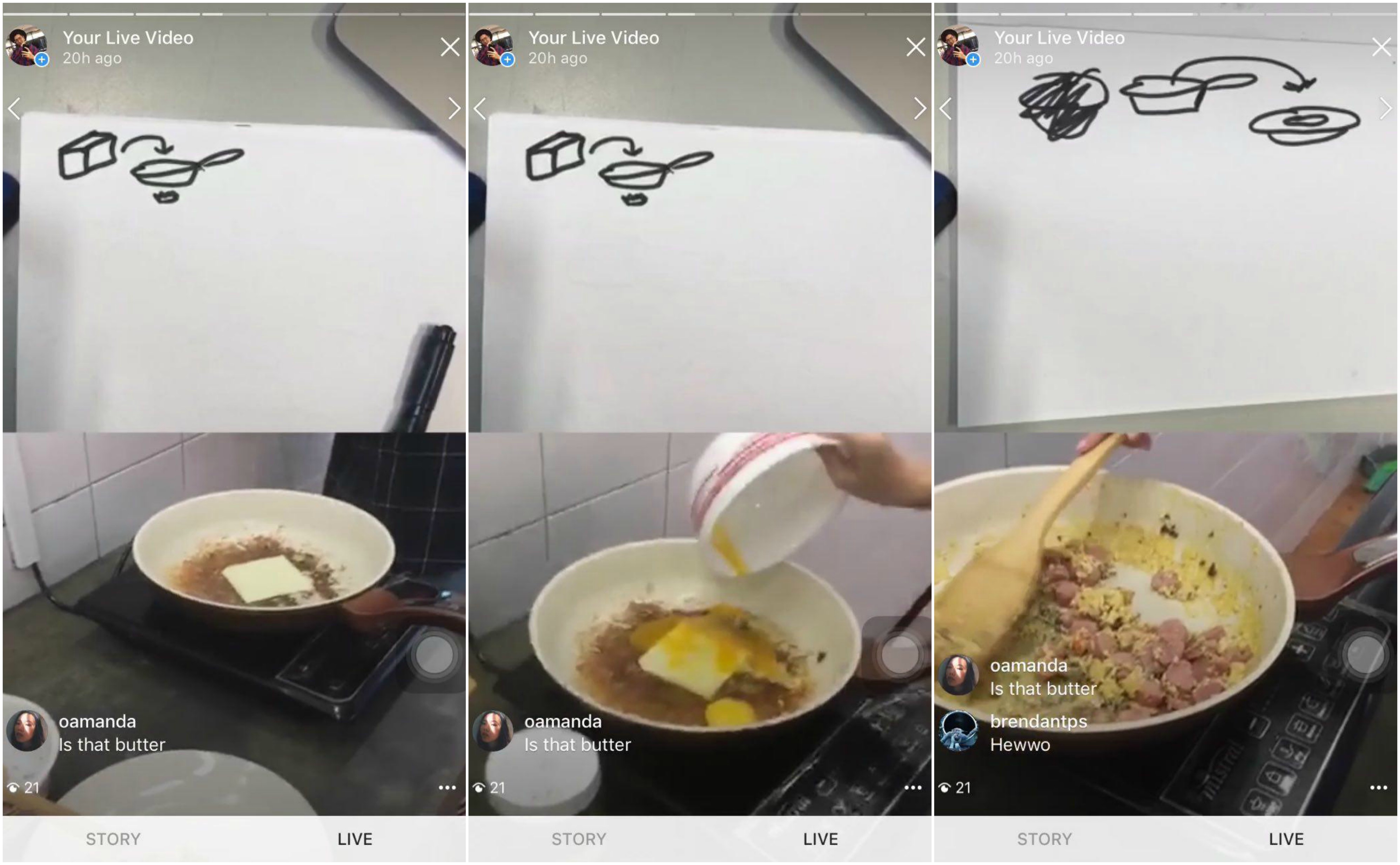 I title this art piece :when you mess up but too prideful to admit you’re wrong (Joel, 2018)

It was difficult for me to keep my opinions to myself as it was my frying pan on the line! The sight of my charred pan made me cringe and I begged Bryan to add some oil into the pan, in hopes that it was still salvageable. (All while Dion and Jacob were laughing their heads off)

After the dish was prepared, we went over to the pantry to give the food a taste test. The only ingredient I dared to eat was the hotdog, because it is already pre-cooked.

These are the ingredients which Tiffany bought 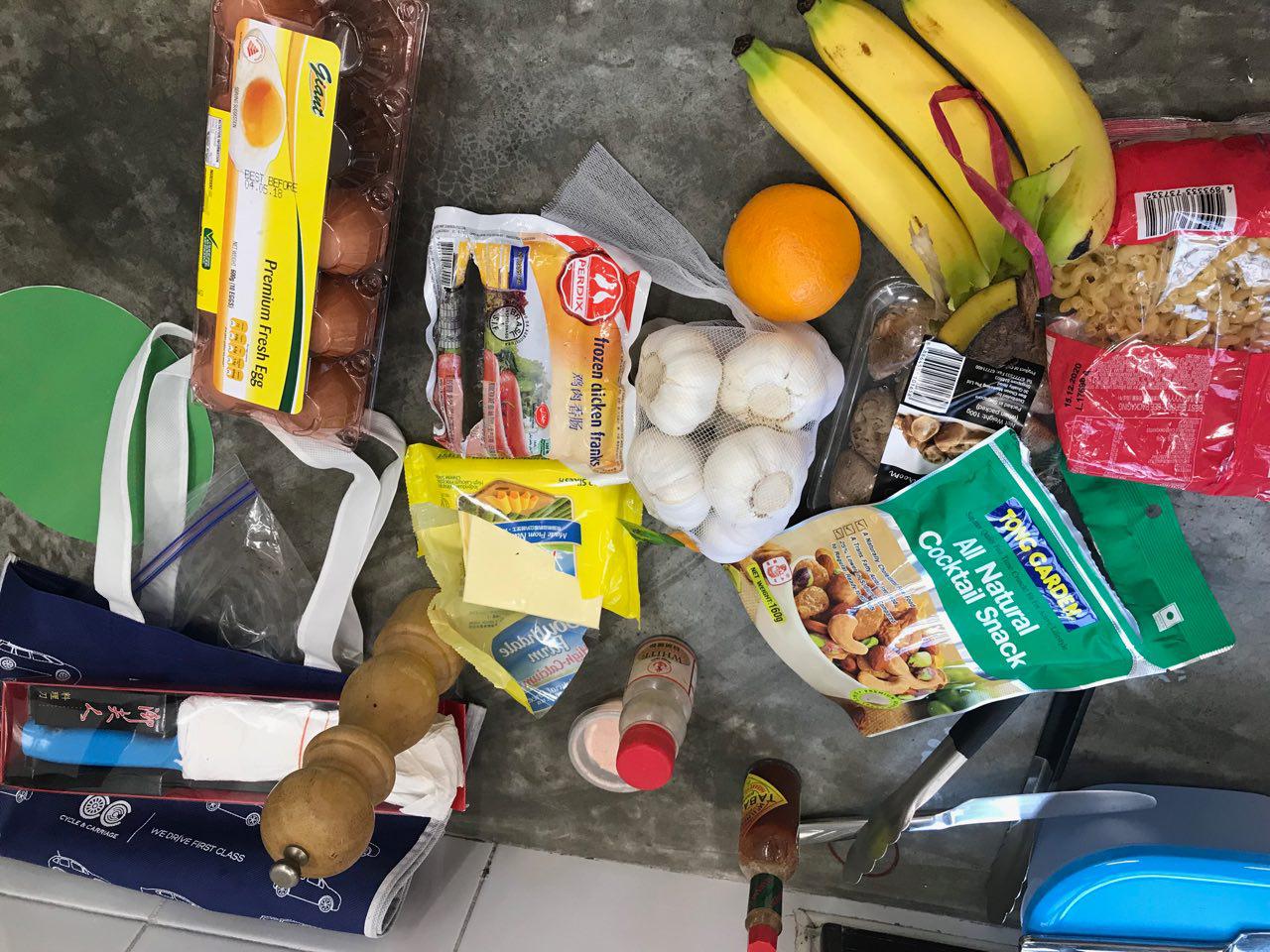 Reflection for the first round:

I can safely say that none of us expected the outcome to stray so far way from the original recipe. I would say that the glitch effect compounded itself, accompanied by the lack of cooking experience, it created a dish that ultimately has no resemblance to the initial product. 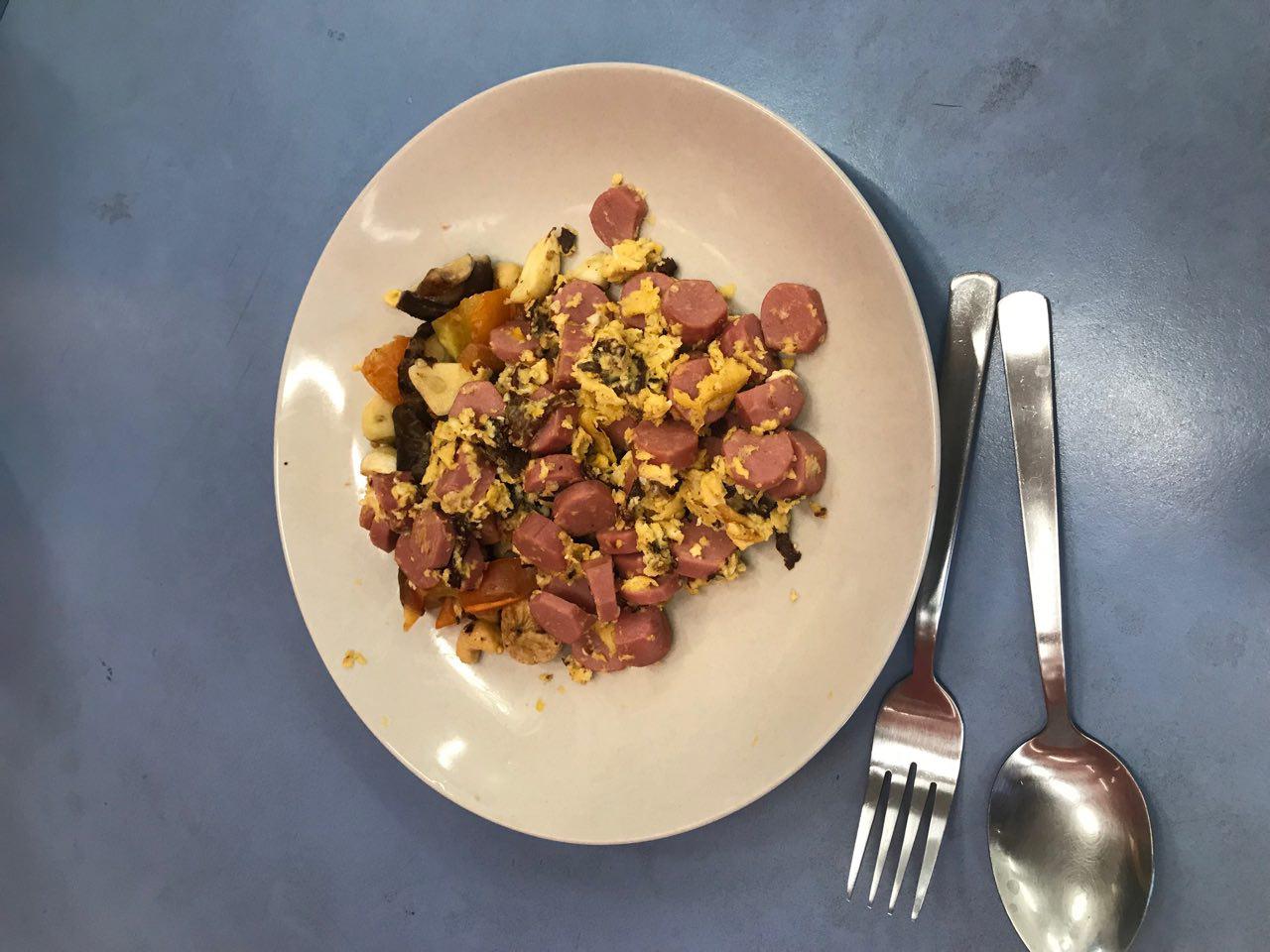 Initially, we wanted to keep the variables almost the same, just tweaking the aspect of familiarity. Instead of comparing between Non-Friends and Friends, we decided to compare between Skilled and Non Skilled. 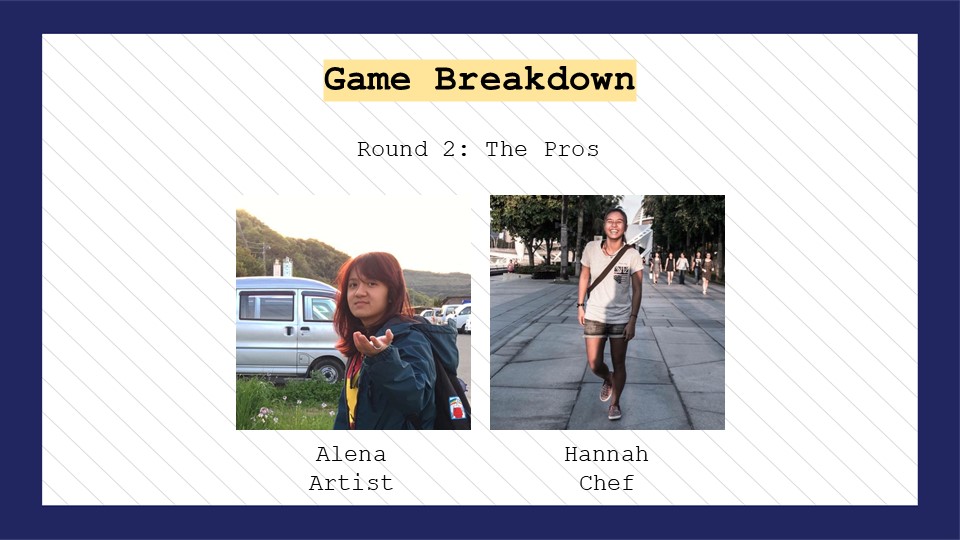 The next round was much smoother, albeit the lack of audience which made things a little mundane. My stream lost its appeal as people already knew what to expect from the game. Because of how apt Alena’s drawings were, Hannah was able to identify the ingredients needed really quickly and she was able to form connections to what other ingredients she would have needed.

This was similar to my case when I was shopping for my ingredients during the trial run as I began to decipher what this dish could have been. Naturally, certain ingredients would go together, such as onions, mushroom and tomato. 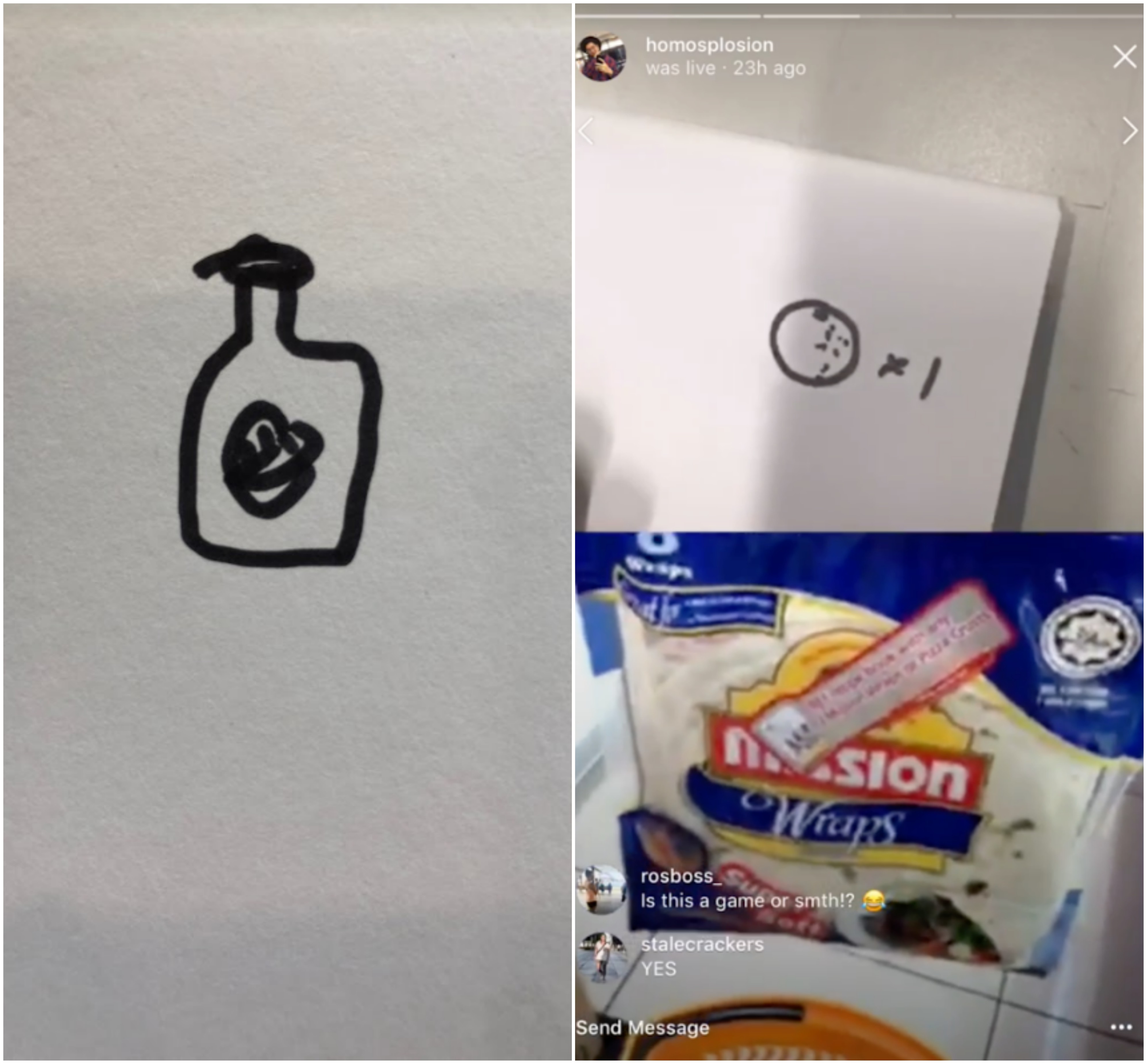 Hannah initially chose oyster sauce, however, her based on prior ingredients, she realised that it was indeed a western cuisine and getting oyster sauce was out of line, thus switching to barbecue sauce. This was an interesting glitch which we did not foresee as it was very subtle, and it would have been difficult to suppress this insight. The chef was also able to recognize that she needed to find tortilla wraps based on that simple drawing from deduction of the past ingredients she got.

As expected, the Chef managed to execute the cooking steps well, often asking for the steps ahead of time as she could piece together the required steps. At this point, because the process was so smooth, it became less engaging for both the moderators and the audience, which resulted in less than 5 people staying in the stream. Those of us in ADM did not see the need to coach the Chef as she was quite independent in the cooking process, thus we started to chat while the chef was doing her own thing.

The outcome far exceeded our expectations, in comparison to the first round and we were more than pleased to eat the final product. 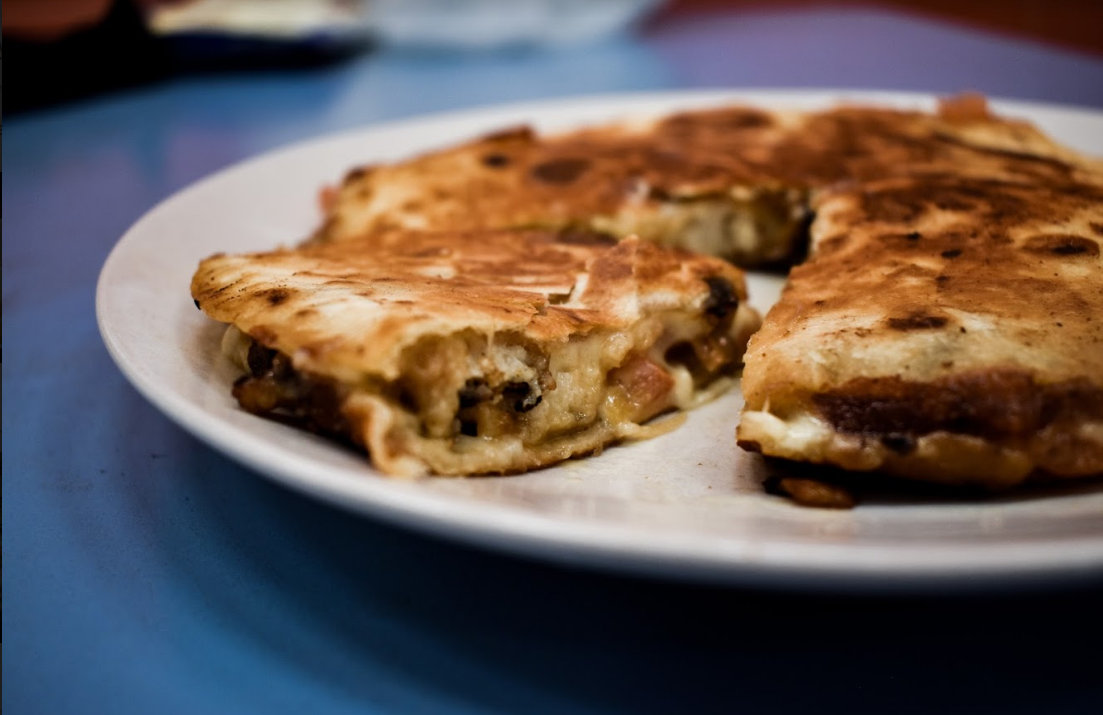 My group was pleased with the outcome as we felt that we were able to engage all of the components of DIWO and glitch, using these two elements to create an interactive installation or game which can accurately depict how these elements are crucial in forming the eventual outcome of our ‘Art’.

Some things which could have been improved would be the audience engagement as we felt that they lost interest too quickly. This could be a simultaneous challenge whereby, if we had 2 teams competing against each other, maybe on different instagram streams, it could be more engaging.

Point that Desmond made was that this could be a standalone game, without the need for moderators. Meaning that it could easily become an installation in the future whereby strangers could participate in this game! We could create a booth open to the public, and they could be the artist as it is less time consuming.

Overall, I really enjoyed this project! From the different ideas to the refining of our product! I felt that I went very smoothly despite the small blunders! (My pan is fine as well!) 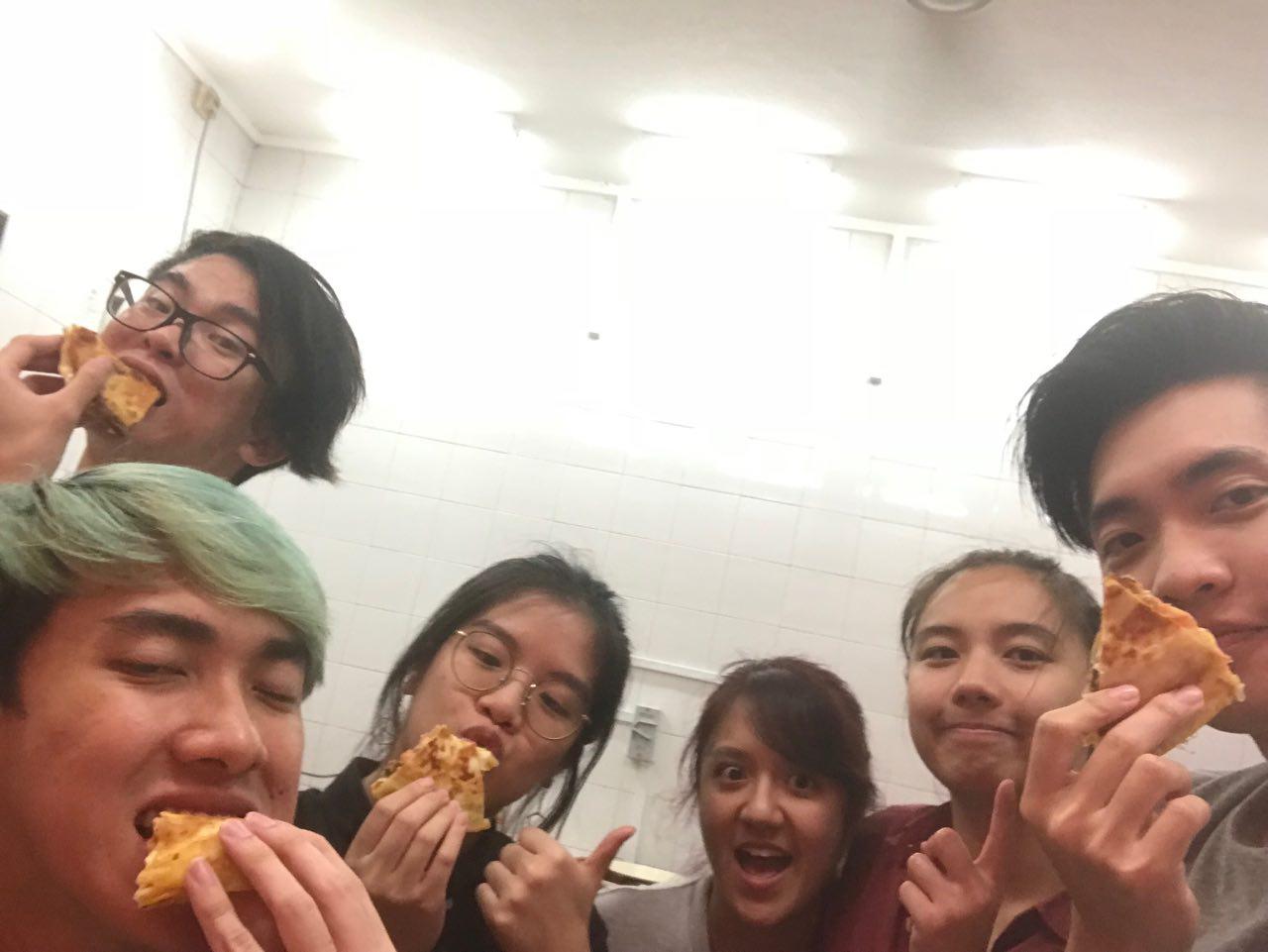