It is quite hard to imagine that it was only within the past century that man has truly been able to eliminate the barrier of physical distance. About 150 years ago, when someone packed up and left, you say goodbye, cry for awhile, and move on with your lives. When a cowboy runs off into the sunset, he leaves everything behind – perhaps never seeing or hearing from family and friends ever again. Paul Sermon’s Telematic Dreaming is a work that highlights the bridging of physical gaps through a projection on a bed that is virtual occupied by the artist.

The performance is set up in two spots, one in an exhibit wherein visitors may interact with the projection, and another is set up for the performer at a distance, in this case, about two houses away. The performer gets to see what happens at the other site, while they too get to see the performer, projected onto a bed. In a sense, the exhibit acted as a cybercafe – a gathering place for people from different parts of the world. However, the scope is much smaller in this sense – rather than groups of people working only, it only allowed for one from one end, and preferably one from the other as well. Guests can interact with the projected figure as they choose – most guests seem to want to touch the performer, but cant, due to it being a projection.

The lack of touch paired with such a vivid and lifelike image puts touch at the focal point of interaction. This highlights the duality of web communication – that we are together, yet also far apart. Perhaps touch would not be in as  much focus if the  exhibit was set up differently – on a different surface? In a different, less intimate setting? Similar projection techniques have been used to great effect in performances, bringing virtual characters to life in the physical world.

With the bridging of physical distance, and the linking of cultures and peoples online, often times it is hard to remember the duality of that connection, the idea that the other is still not exactly the same as us, even if we feel connected online, whether through social media, video calls, forums, IRC channels. The duality that is highlighted, intentionally or unintentionally, by Telematic Dreams is something that we should all keep in mind when interacting online.

So, data visualization is cool. Points running around. Eccentric. Yay!

This is the initial:

It could induce a seizure. All of these could actually. Probably all the data.

ANYWAY. Time to crash your browser!

Next, we change the vector graphics from circles to images. The default is hilarious, no matter how many times you see it (sorry Juan!)

This is the crashy version that only has the image changed:

I decided to not use Kappa, and created my own image: say hi to the alien! Here he is, with some shifted gravity, distance, and force values:

This one’s a bit more zoomed out:

Honestly, I think there’s too much data shown in my pens that reaaaally lag up a web browser, but this is fun. I’d add lines and stuff, but it turns into chaos!

Are the eggs a reflection of a fractured state of mind that the cook inevitably accepts to be truth? Is it an allegory to ones effort in day to day being messy yet delicious at the end? Who knows. The Cook just wants his Eggs.

Ikeda uses data as a source for sound and visuals, using dynamic CGI to render visualisations and synthesisers to create music. You can see an example in the video above. The data is sourced from hard drive errors and software code, and then run through a stack of filters and processing algorithms to turn it into music and animation that’s not too far off glitch art.

The result is sparse, black-and-white imagery with just the occasional flash of colour, overlaid with high-frequency bleeps and blips and underpinned by droning bass frequencies. You can hear a sample on Soundcloud. Ikeda uses high-framerate video and variable bit-depths to, as the artist puts it on his website, “challenge the thresholds of our perceptions“.

Datamatics is a series of audiovisual works by Ryoji Ikeda, turning space into visual data points flying past our eyes. The work breaks down our perception of space, turning the space into 1s and 0s. It converts our space from a physical plane to something less tangible, more electric. He helps visualize data errors in an artistic manner that is surreal and tangible.

Though the process of data corruption cannot be actually visualized, Datamatics uses such data in creating its vivid imagery and music. In that sense, Datamatics is anti-sublime because it maps something that is nearly intangible into a form that we can decipher.

If Romantic artists thought of certain phenomena and effects as
un-represantable, as something which goes beyond the limits of human senses
and reason, data visualization artists aim at precisely the opposite: to map such
phenomena into a representation whose scale is comparable to the scales of
human perception and cognition.

The generation of imagery and music from a nearly intangible form is reminiscent of Norman McLaren’s work with film – he simply drew what he wanted directly on film, creating fast moving images and futuristic sounding music. While not anti-sublime or data-related, it is interesting to see Datamatics in comparison to his films, such as Synchromy.

Datamatics blurs the line between the intangible data and the physical space we inhabit, and in that way creates a new sensed space for us to explore, superimposing our physicality with the seemingly nothingness of data. It brings down the formless into form, and forces us to rethink of how we see the world – whether we see objects made of 1s and 0s, or whether we see data as matter.

The advent of the digital age has brought along with it new tools and forms of social interaction. Douglas David’s World’s First Collaborative Sentence highlights the early development of online interaction. As an artist, his work provided the canvas for others to contribute their own part in creating a collaborative sentence.

The World’s First Collaborative Sentence came out during the early rise of the internet in mainstream use – as such, it comes from a time before Google was ubiquitous, Reddit didn’t exist, and Facebook wasn’t even conceptualized. Writely, one of the first online word processors wouldn’t be out until about 2006, wherein it would be bought by Google. As such, the process of making the sentence was a completely new form of online interaction in that time.

Much like a clean wall, David’s work serves as a canvas for others to contribute to, but the result may not be cohesive or sensible, just like graffiti tends to turn out – many people add their own works to the wall, but it doesn’t necessarily work hand-in-hand with other creations. The sentence reflects that – with many people leaving repeated greetings, or ramblings in a foreign language – there is no overarching, unifying factor in the sentence besides the fact that it was created by many, not just by a single artist.

The sentence reflects a factor of online interaction – anonymity. The incoherence and sheer randomness of the sentence is almost akin to 4Chan, which usually has far less benign content than the sentence. David’s work highlights online noise, yet at the same time, shows us what the internet is capable of – it bridges physical distance and makes it possible for all people to work together towards a common goal, whilst featuring a stream of consciousness not possible without anonymity.

Today, with the multitude of social media users and posts, it feels like the internet itself is a macrocosm of the sentence – everyone has something to post, some posts we make have no connection to our previous posts, and everyone wants to share what’s on their minds in the internet’s collaborative story. 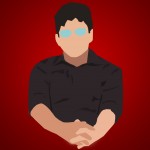 Dear Respected One, GREETINGS,Permit me to inform you of my desire of going into business relationship with you. I got your contact from the International web site directory. I prayed over it and selected your name among other names due to it’s esteeming nature and the recommendations given to me as a reputable and trust worthy person I can do business with and by the recommendations I must not hesitate to confide in you for this simple and sincere business. I am Wumi Abdul; the only Son of late Mr and Mrs George Abdul. My father was a very wealthy cocoa merchant in Abidjan,the economic capital of Ivory Coast before he was poisoned to death by his business associates on one of their outing to discus on a business deal. When my mother died on the 21st October 1984, my father took me and my younger brother HASSAN special because we are motherless. Before the death of my father on 30th June 2002 in a private hospital here in Abidjan. He secretly called me on his bedside and told me that he has a sum of $12.500.000 (Twelve Million, five hundred thousand dollars) left in a suspense account in a local Bank here in Abidjan, that he used my name as his first Daughter for the next of kin in deposit of the fund. He also explained to me that it was because of this wealth and some huge amount of money his business associates supposed to balance his from the deal they had that he was poisoned by his business associates, that I should seek for a God fearing foreign partner in a country of my choice where I will transfer this money and use it for investment purpose, (such as real estate management). Sir, we are honourably seeking your assistance in the following ways.1) To provide a Bank account where this money would be transferred to.2) To serve as the guardian of this since I am a girl of 26 years.Moreover Sir, we are willing to offer you 15% of the sum as compensation for effort input after the successful transfer of this fund to your designate account overseas. please feel free to contact ,me via this email address wumi1000abdul@yahoo.comAnticipating to hear from you soon. Thanks and God Bless. Best regards. Mr Wumi Abdul PLEASE FOR PRIVATE AND SECURITY REASONS,REPLY ME VIA EMAIL: wumi1000abdul@yahoo.com