For this Microproject, we were asked to express our alter ego. I imagine myself to be able to afford the time of day to choose which mode I want to live my life in, whether it is in black and white, in full colour or in slow motion. In my video, I explore my ability to take my time to choose what I want in life rather than just being forced into the life I lead now.

For this project, I know we are able to use sound to our advantage but in my case, I chose to use the lack of sound to express my point. When you are choosing something, you don’t necessarily want the extra voices in your head to affect your choice. Thus, I left sound out out this.

I chose to do a screen recording to show that maybe, in an alternate universe, humans  will be able to choose the mode they would like to live in on their own brain machine things.

An angry woman is vindictive beyond measure, and hesitates at nothing in her bitterness. -Jean Antoine Petit-Senn

This quote seems relevant to the work we analyse this week. Annie Abrabrams’s Angry Woman (2013) is a work done over the third space, where she invited 22 other women of different nationalities to be on an online platform where they all vented their anger, demonstrating it in different forms such as yelling, speaking throughout, or staying silent. They spoke in different tongues, which makes the work that much more interesting because the viewers don’t necessarily understand the language, yet are still able to comprehend the level of anger they experience. In other words, the emotions transcended the language barrier. We see it through their tone, their facial expressions and their body language.

So, how did Angry Women use the medium to its advantage?

So instead of dwelling on the frustrations of the network connection, she finds inspiration, and perhaps more importantly, she sets up compelling situations that allow her and others to make critical observations about connection and disconnection. –Randall Packer

This work is done online, through an social broadcasting site like Adobe Connect. Through Angry Woman, we see Annie Abrahams still moving through the work, even as some of the participants get frozen up because of the bad connection. It somehow works to her advantage, as the faces get frozen when the participants are looking particularly frustrated. According to the article by Randall Packer, she asked the participants to purposefully switch their webcams off, which created a ever changing collage of videos happening simultaneously, and makes the composition of the collage continually changing. Without the medium of a online application like Adobe Connect, this kind of work wouldn’t have been possible. Annie Abrahams uses the glitching network as part of the work, and it adds to the work rather than distracts from the work. She manages to show the community of angry women and weaves them into a cohesive narrative to show the process of the women getting worked up and cooling off (in Take 4 I think). In a way, the women’s energies bounce off each other and they react to each other’s actions, making the work out of the artist’s control, and that’s whats interesting in Angry Woman. 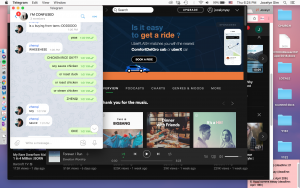 This is my desktop. I am my desktop. Disorganised, multi-tasking all the time. I always have my telegram chats up on the side, ready to reply any chats from my friends. I guess that would be the more intimate social interaction that I have, not so much of Facebook and Instagram. I then have my Spotify, playing my worship songs as I do my work on my laptop. It usually keeps me more calm while doing work. This tab kind of shows how much I rely on the songs to keep me going through the last nights. The next tab behind is the Chrome window, where I do most of my research and work on. On my actual desktop lies my to-do list, lurking with my deadlines, and the files that are important to me. Also, Photoshop is always open in the background because I guess I use it too often for it to be switched off.

Face to Facebook is an installation piece that highlights the problem with the lack of privacy because of the influx of social media, in this case, Facebook. The work takes one million Facebook profiles from the database  (and processes them through a facial recognition software) and creates an online dating platform which then allows users to ‘date’ these profiles and connect with them. This proves how secure (or unsecure) Facebook is and how odd it is that we are simply allowing ourselves to be so vulnerable online.

In the Face to Facebook website, they mention that the website is a ‘goldmine for identity theft and dating, without the user’s control’ which I agree with. On Facebook, many people overshare about their lives- what level they are on on Candy Crush, what they have been doing on their weekend and many rants about schoolwork. I assume the people on your timeline are important to you, that’s why you bother to look through their many statuses. But what if it isn’t important to you? It ends up being a waste of your time (and leads to unnecessary scrolling and procrastination) Many people have different uses for Facebook, for me it is a place where I go to only find and stalk my primary school friends (backstory: I haven’t been on Facebook since about 8 years ago, and I was a very different person then.) Unfortunately, when you overshare, identity theft is very possible because it makes it easy for people to hack their accounts. I have had friends have their Facebook accounts hacked through their emails (don’t know the details, I’m guessing through the security question?) and it does deter them to continue using the platform in the long run.

This indeterminacy allows us users plenty of space to make things mean what we want them to. -D.E. Wittkower (A Reply to Facebook Critics)

I guess that is the beauty of Facebook as a social media website. You determine what it is for yourself. For me, it used to be a place where I would talk to classmates online, and join groups that I was interested in and my class groups. It was a place where I would reconnect with old primary school classmates. Even then, I never posted a photo of myself for fear of identity theft. However, a whole 8 years later, I use other social media platforms for connecting to friends, and I don’t necessarily want to talk to old friends. The indeterminacy of the website allows you to do what you want it to be.

The DIWO culture is very apparent through all the works we have done throughout the past couple of weeks, not just in the third space but also in the first space. the third space makes collaborating even more possible because of the accessibility of the internet, though I believe that there are traditional ways of collaborating as well.

DIWO is a gift of resistance in the 21st Century, exploring relational and hybrical realizations. It is socially informed, constantly adapting, intuitive and grounded. It can collide with mainstream culture but also exist deeper in the networked shadows, in accordance to the needs of who ever participates at any given time. –Marc Garrett (2014)

I think it is interesting to think of DIWO as a ‘gift of resistance’. Instead of having everything made to be aesthetically pleasing, I see how the exquisite glitch can be an art in itself- the process that the image goes through to become the way that it ends up at, how each person gives the image their own personal touch, whether it is scaling the image, pixelating it or liquifying the image. It is basically resisting the idea that the picture must be perfectly framed or taken at a certain time of day, and makes it socially and artistically acceptable to have a different aesthetic. The work adapts to whatever situation it is placed in, no matter the social context it was initially taken in. As the image gets passed through the different hands, the image is manipulated to form a different kind of aesthetic that reflects the person’s frame of mind at the time, and the end product is much more interesting as you look at the different stages that it had gone through to reach the end point. You end up with a collective narrative.

In the 21st century, it is also important to note how DIWO is relevant to the Third Space, since it introduces another dimension to DIWO. More than just doing things online, we can do things online together. The Telestroll microproject highlighted how we can use the internet to our advantage, as it can incorporate the first and third space together. Felicia and Bala’s collaboration on the Telestroll encapsulates this well, since they ‘collaborated’ with the people that they saw on the streets and interviewed, as well as collaborated with each other via the Facebook live. This would not have been possible if done alone or without the help of the third space.

Going beyond the paradigm is not easy when you do it alone, but when you collaborate, it is more possible. After all, two (or more) brains are better than one.

Ant Farm is a avant garde art group founded in San Francisco by Chip Lord and Doug Michels. As a group, Ant Farm did Media Burn (1975) which addressed the pervasive nature of the television in many people’s lives. It confronts people directly as the work was made to imitate a real life event that would have been televised for all to see, and poked fun at what people usually would deem as a serious topic. It took something serious and brought it to the art context and changed the purpose of the ‘news coverage’ and the audience’s reaction.

I have to say that Ant Farm and Media Burn resembles the idea of Andy Warhol’s Factory (although their purposes are different) Andy Warhol’s Factory ran from 1962 to 1984 and it was basically a studio space in New York where artists gathered and contributed to the iconic silkscreen prints by Andy Warhol, as well as provided a breeding ground for the artists to collaborate. One famous group that emerged from the Factory is The Velvet Underground, which made the collaboration the Velvet Underground and Nico possible. Perhaps it is the fact that both of the groups are breeding grounds for collaboration and this is what is most important to both these groups: to do things with others. Another point where they resemble each other is that Andy Warhol sort of poked fun at the popular culture in the American culture with his soup can sales and print sales. The television culture was growing in importance and Ant Farm took it and poked fun at it. The funny thing is that the mainstream media covered it as well, without fully knowing the purpose of the artwork, and manifested the work further as it poked fun at the television culture.

(Sidenote: Singapore tried to get something like this happening, The Artist Village (TAV)! Founded by Tang Da Wu, in Sembawang, and it subsequently moved to Pulau Ubin because of the government reclaiming the land at Sembawang. The Artist Village is less active nowadays but the residency is still happening (I think), and one of my cousins is actually a member of TAV. It would be so powerful to see something like Media Burn happen in Singapore, but it probably wouldn’t be that feasible with the political and social stigma in Singapore.)