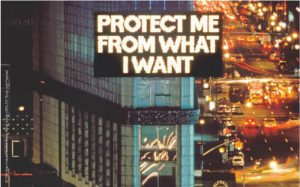 The artist I chose for my hyperessay is Jenny Holzer.

Minimalism was birthed out of the need to differentiate from abstract expressionism in the 1940s and 1950s in post war American Art. The whole premise of abstract expressionism was to have gestural and emotion-filled brush strokes on a fairly large canvas, like in William de Kooning, Jackson Pollock and Mark Rothko’s works.

Unlike for abstract expressionism, in minimalism the individual author is removed from the artwork as much as possible.

What Frank Stella shared about minimalism is the line that completely encompasses the purpose of minimalism. What you physically see with your physical eyes, is what you understand literally in your mind. It does not try to be what it is not, unlike the Old Masters paintings where chiarosuro is used to “trick the eye”. It goes straight to the point that the objects will just be what the viewers are meant to see and understand. The author is usually not represented by the work presented, or even reference his own train of thought through the title of the work. For example, Donald Judd’s works are all ‘Untitled’, and that does not reference anything to the way he was thinking when creating the work. The only point of reference is the year that the work was created in, leaving the viewer with only the actual work to appreciate and understand the premise of which it was created.

The works in the Minimalism realm (apart from the paintings) were mostly made with readymade objects and were not manipulated very much. Things like Plexiglass, aluminium panels became part of many Donald Judd’s works and remained one of his signatures. The only thing done to them were putting them together, and sometimes painting enamel paint over them. The works confronts the viewer with the materiality of the space- how the very simple materials and the collection of right angles have manipulated the way we look at the space differently. The viewer no longer just looks at the box itself but the space in which the space interacts with the material of the box itself. By using readymade objects and not manipulating the objects very much, it takes away the traditional notion of the ‘artist’s touch’ in many old paintings- the stylistic signatures of the artist are not present in the object itself. It somehow creates a impersonal distance with the works, and makes it feel factory made and clinical. The works were not created to connect with the viewer, it was just to interact with the space and the space in which the viewer is in.

Another step taken to close the gap between the work and the viewer and the space they occupy is the fact that the works are not on pedestals or plinths. By placing them directly on the ground, the viewers are able to experience it fully- they can walk right up to it (not necessary touch it- it is a gallery after all) and they don’t have anything anything separating the two. This is the phenomenology that was mentioned in the presentation. The viewers are able to study the work up close and observe how the work is presented and how it is experienced. The work is the space it occupied, not the illusion of space that paintings used to try to convince you about. The presence of the work is three dimensional, not a two dimensional work trying to tell you that it is three dimensional. This is a radical move that changes the way the works interact with the viewer.

The interaction between the viewer and the work itself also determines the way the work is interpreted and related to the viewer. The viewer cannot rely on someone else to interpret the work for them, but they have to take on the work themselves. For example, the whole series of Equivalent by Carl Andre is made of the same material- firebricks. The only thing that changes between the work is arrangement of the same number of firebricks. To interpret it properly, you have to physically confront the mass of firebricks and the way that it interacts with the environment it sits in, the wooden flooring and the white walls around it. While it is possible to see it through a screen (a computer/mobile device), you would not be able to observe the physicality and materiality of the firebricks, the way it sits in the gallery floor.

The problem with minimalism is that everyone thinks its so simple that anyone could have done it.

I could do that. – Everyone.

But you didn’t think about it before. And you didn’t present it as a piece of minimalist art. And you didn’t live in Post war America to experience the wave against abstract expressionism. So no, you couldn’t have done it. 🙂