Jenny Holzer is a neo conceptual artist who lives in New York. Many of her works are installation based, but uses a large variety of media to broadcast her works. While she is based in New York, her work has had global influence through her text based works that have political and feminist influences. 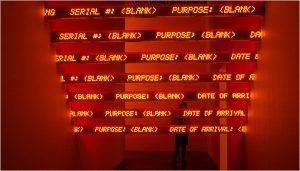 “Red Yellow Looming” was displayed in Whitney Museum of American Art, and is now at the Met Bruer, a museum dedicated to modern and contemporary art in New York, in an exhibition named “Everything is Connected”. The work consists of a series of 13 horizontal LED tickers running across a narrow space between 2 walls.

The work bathes the small restrictive space in a red glow on one side of the tickers, and on the other side of the tickers, yellow. As the viewers walk up to it, they are overwhelmed by this as it is the only light source in the space, and they are drawn in. The thirteen tickers are placed in ascending order, almost like a set of stairs that leads to nowhere.

While the work doesn’t actually interact with the viewer like many other works shared by the class, I believe Jenny Holzer’s works gives a very strong physical immersion experience for the viewers. Instead of giving the viewers an option to alter the words on the tickers (like for Truisms, where viewers choose a truism and change a word or phrase and post it in a list), she completely immerses the viewers in the red/yellow LED lights. While it is not like Virtual Reality (VR), the person is in a constricted space flooded with the strong lights and is confronted with the moving words on the tickers. The viewers might even struggle with concentrating on just one set of tickers because of the constant movement. It leaves the viewers feeling like they are not the ones in control as they have no idea what the tickers will show next. It almost instills a sense of expectancy and confusion in the viewers as they wait for the next line to appear on the ticker.

The content displayed on the tickers are actually excerpts from the United States government’s documents on Iraq. The red and yellow background only helps to emphasise on the urgency of the matter that Jenny Holzer wants us to focus on.  In addition, the high speed at which the words travel across the ticker also makes the viewers focus solely on the content and not just on the bright surroundings.

The use of the thirteen digital tickers also have a significance. Tickers are usually associated with the stock tickers and stock market. By using the digital tickers, Holzer is trying to associate the importance of the Iraq War that has claimed many lives between 2003 and 2011, of which the United States was heavily involved in, to the stock market in United States. There is evidence in the direct correlation between the Stock Market dips and the country’s involvement in wars globally.

Despite Jenny Holzer’s lack of use of ‘high’ tech gear so to speak, she manages to pull off a very successful work where she brings her viewers to a holt to focus on the problem she has identified. Even without the physical interaction which creates a physical output immediately like a Dynabook, it brings you on a journey through her creative process.