Design doesn’t have to care entirely. Often times, according to a paper by Barab et al., designers often are not critical ethnographers but as instructional designers interested in the research and development of designed structures that facilitate learning and empowerment. (2004). At this point, I think about my own personal practice and the assignment brief that had been brought down onto me for this assignment. What do I care about? What do I need to care about? Is it about what I care about or is it about what other people care about? What does the word ‘care’ even pertain to. 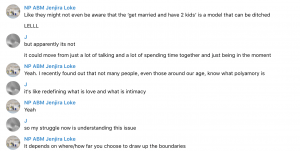 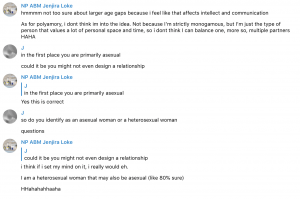 I went to ask a friend of mine who works in a cafe that is known to be a safe space to people of all gender identities, ethnicities, or other minority understandings. As a heterosexual/possibly asexual woman, she asserts that such relationships are not for her. Even the language that she used depicts her non-aversion to such possibilities.

Furthering this, I decided to ask a homosexual man on his take on his own relationship. 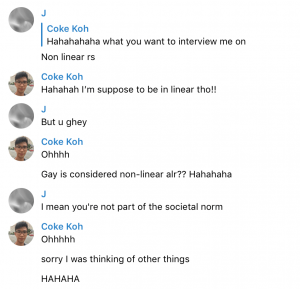 While not explicit, this inference shows that his thought of a monogamous relationship between him and his male partner constitutes as a linear progression.

Based on letters by Noah Smith, Penelope Swales, and Jacques Attali, their article – The Benefits of Free Love, illustrates their own romantic and sexual relationships. In Smith’s letter, he mentioned that AIDS was an incentive for monogamy, ‘selecting’ the most monogamous people for survival. He also mentioned that experiments with ‘Free Love’ had led controversies since 1960s till now. Penelope Swales then brings in her own polyamorous / non-monogamous relationships as an example and states that illicit affairs are not polyamorous relationships especially since they are not honest. Attali was much simpler in representing his thoughts. While the two aforementioned writers had critiqued his essay, he clearly states “In my essay, I was not forecasting that polygamy will replace monogamy, but rather that the two will exist simultaneously. Therefore, both Noah Smith and Penelope Swales agree with me – if not with each other.”

After a conversation with a friend of mine who is interested in critical design, I decided to think of my findings and what I wanted to show in an infographic and who I wanted to target.

Based on my conversation with Jenjira and Coke, I realised that what people between the age of 25 to 35 want to learn more about different relationship types instead of the mainstream and linear. From this, I can understand that my target audience would be 25 to 35 men and women and my infographic should aim to present various forms of non-linear relationships and that tagline should encourage youths to try various forms of relationships.

In terms of products that I want to look at making, 1 would probably be a zine/website to serve the purpose of allowing people to understand and be more accepting of non-linear relationships. That is phase 1 – promotion and awareness. For phase 2, I would want to try condom packaging to promote safe sex. This is in-line with Smith’s comment on how 1960s sexual revolution and experiment in free love had led to controversy till now. The idea of free love and empowering the body would require sexual / romantic exploration. As Smith had mentioned, HIV/AIDS would seem like an incentive for monogamy. Thus, safe sex would for both men and women would allow for such exploration.

So in terms of care, why do we have to care about people with different relationship philosophies?

The times are changing and as the world evolves, relationships and intimacy hav changed as well. Previously known non-socially acceptable relationships refer to throuples, sugar daddy/mommy and their babies, large age gaps, queer, polyamorous, open relationships and other lesser known variants that constitute a human relationship.

Currently, the only socially acceptable relationship is the heterosexual monogamy. At times, it is easy to say that such relationships should be only variant. However, we should try and understand that the world is more diverse and different than we actually think it is. End the discrimination and stigma of lesser known variants of relationships.

HIV currently has a strong stigma in Singapore. The truth is, while HIV is common and rampant in places where sexual freedom occurs, like America, this fact would also mean that the society and medical attention is more focused there.  According to U.S. statistics, more than 1.1 million people in the U.S. are living with HIV today, and 1 in 7 of them don’t know it An estimated 38,500 Americans became newly infected with HIV in 2015.Gay, bisexual, and other men who have sex with men bear the greatest burden by risk group, representing an estimated 26,200 of these new HIV infections.From 2010 to 2015, the estimated number of annual HIV infections in the U.S. declined 8%.In 2016, 39,782 people were diagnosed with HIV in the U.S. HIV diagnoses are not evenly distributed across states and regions. People in southern states accounted for more than half of new HIV diagnoses in 2016, while making up 38% of the nation’s population. However in Singapore, of the 434 cases, 94% were male and 71% were between 20 to 49 years old. About 41% had late-stage HIV infection when they were diagnosed. Sexual intercourse remains the main mode of HIV transmission. 96% (417 out of 434) of the cases acquired the infection through sexual intercourse. Heterosexual transmission accounted for 36% of all cases, while 50% were from homosexual transmission and 10% from bisexual transmission. 45% of the newly reported cases were detected in the course of medical care provision. Such cases are typically at the late stage of HIV infection. Another 27% were detected during routine programmatic HIV screening and 23% were detected from self-initiated HIV screening i.e. voluntary screening. Cases detected via voluntary screening are more likely to be at the early stage of infection. When differentiated by sexual transmission, a higher proportion of homosexuals and bisexuals (33%) had their HIV infection detected via voluntary screening compared to heterosexuals (8%).

Another issue is that due to this stigma, the research and aftercare of infection is expensive and hard to access. Pre Exposure Prophylaxis (PreP) would help prevent or lower the risk of HIV infection in high risk sexual intercourse. However, the access to this drug is expensive and many people go to Thailand to get it at a cheaper rate.

Currently, the idea of gender variance is socially unacceptable in Singapore. These variants include the non-binary, transgendered, inter sex, queer, and other alternative labels. The problem with people not accepting this label is because of the conservative nature of Singapore. What people should do is to understand that the world is changing and labels are constantly being blurred.

Toxic masculinity is a poor man’s excuse of being gregarious and disruptive. We should end toxic masculinity. A post on Urban Dictionary that sums this urban term is “Any Male action that doesn’t conform to liberal ideals of what a man SHOULD be in today’s society. If he isn’t sensitive and emotional and docile he is accused of toxic masculinity. Where as used to these people were known as “douche bags” or even “assholes” (see also Twunt) now they are blamed for being a product of the male driven society” I think that all in all toxic masculinity is rampant in Singapore due to National Service and the poor excuse and teachings of the army officers would prove this true especially in times of all the deaths and injuries caused during training that were not through negligence.

I feel that I would want to touch on topic 1. This is because there is little to no diagrams or tables present currently that explains relationship variants. 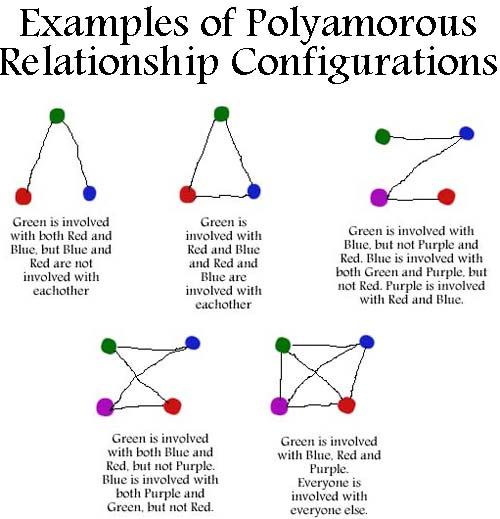 These are all the types of relationship symbols and infographics that I could find on google. But it would be better if we could do more to let people visualise and understand the stigma that people feel.

I feel that not a lot of people know about this and should be respectful to people that are not part of the status quo. I want to target adults because they are more likely to want to explore relationship variants. If you don’t know, you never try! And no one should judge them for trying to find a suitable relationship variant for themselves.