Through reading the article I feel that open source codes have allowed many people to build on the software codes that have been passed around through the converging world via the inter web. Unfortunately, the open source practice would result in ideas being shared openly. With the concepts of patents and copyright, which is pretty much the key stronghold of ideation in the creative and making industries, it negates the positive effects of open sources practices, which is essentially sharing information and learning how things work.

The rise of patents and copyright only serves to enable commercial entities to capitalise on their “faster finger” to apply for patents and copyrights, protecting their “creative information” from spreading too far into the open source domain. However, unlike the propriety of stock images and royalties, software is compilation of programming languages and is essentially decodable one way or another. In terms of creative ideation, patents would negate the spread and build up of a community of the open source code.

In more intimate communities however, this idea is of open source is much more welcoming as there is a lack of commercial regard as high level conglomerates are not there to interfere and the supporters of this open source movement have moved to something further away from a community movement, but into a political movement.

All in all, I feel that open source communities would be great for peer learning and peer build up, but it would also mean that there would end up with a lack of commercial benefits in the long run.

Barthes’ Rhetoric of the Image aimed to investigate the necessity of context within an image. Whether analogical representation, or a context is required to interpret images and if the interpretation of images could be decoded using a systematic detailing list of practical, national, cultural, aesthetics to be decoded.

Some key terms and concepts introduced was the idea of the signifieds (meaning) and signifiers (image) and how the idea of semiotics is brought upon via the denotational and connotational. Another concept that struck me was the idea of drawings vs photographs and how the relationship of signs contrasted between these two mediums. Expanding further, Barthes also explain how film is no longer a subset medium of photography but a completely different set of signs.

I do agree as the approach taken for image decoding is dependent on the signs and symbols and how the signified is relative to the signifier. Another concept which I agree would be the the choice of mediums. As stated, there is no drawing without style, as such the stylistic interference would already have a connotation within itself. As such, photographs are purer in providing signs and symbols as opposed to drawing, however, with photography comes with manmade interventions like framing. 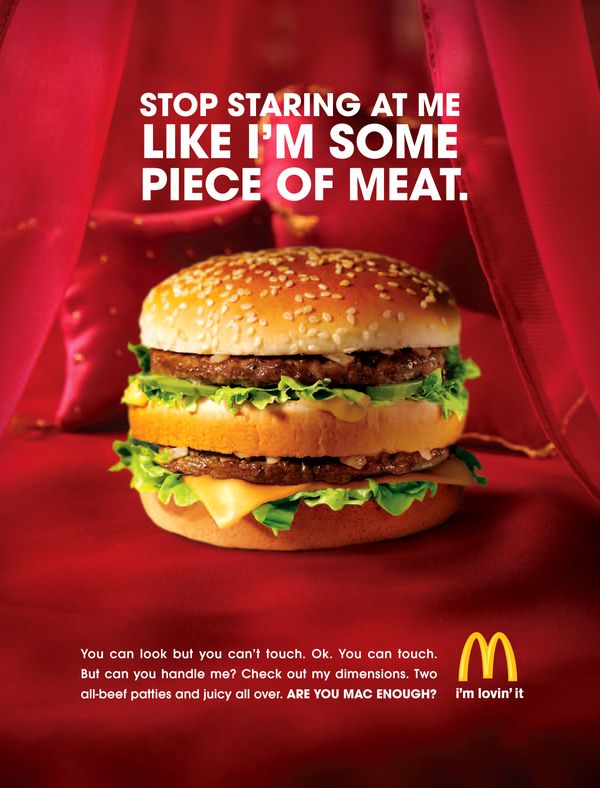 In relation to the article by Barthes, the denoted image of the print ad is that of a simple burger, namely the BigMac. However, the use of text has transformed the connotations. The rhetoric used challenges the reader on their toughness to tackle the burger. While meat is usually contextualised with masculinity, the idea of the rhetoric is to influence audience to consume the BigMac to prove their own masculinity. This breakdown would have been impossible without the use of text to supplement the advertisement and thus changing the connoted message within the denoted image of the burger.

This breakdown on the connoted message provided by the text used in the advertisement is further augmented by Barthes’ idea of identifying the message through a list of practical, national, cultural, aesthetics.

Practically, a burger is just an item for consumption and sustenance. However the added context of McDonalds’ provides the idea of fast food and a fast paced consumption rate at an affordable price range. This is further pushed through with the fact that McDonalds’ stemmed from American values in which consumerism, commercialism and capitalism thrives on. The cultural context is then put into play when the rhetoric is used to influence buyers to purchase. The cultural association of beef to masculinity and the idea of the challenging the readers’ manliness is put into play. Furthermore, in terms of aesthetics, the photograph was framed to be in a luxurious red bed setting, which provides an idea of luxury and seduction, thus using human intervention (framing and setting) to give a connoted message as well.