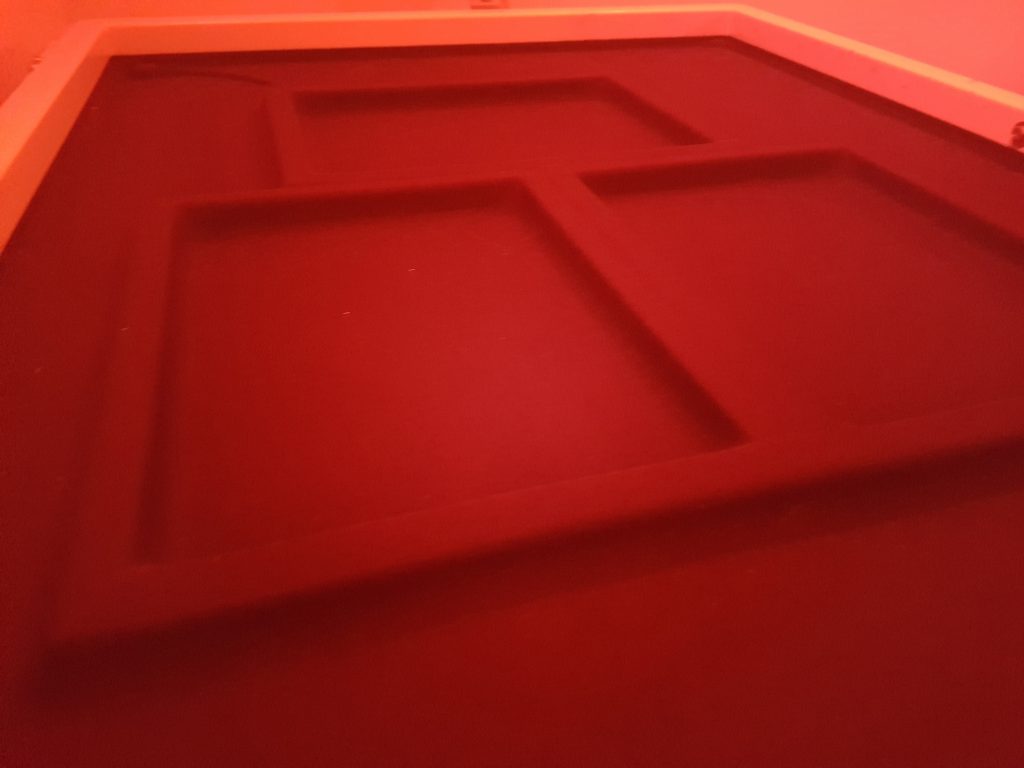 After practicing on papers, I decided to try it out on my tote bag to produce my final piece. My first attempt was a failure as I did not apply enough ink and did not apply the pressure evenly.

After my first failed attempt, I learnt that in order for it to turn out successful, the amount of ink to be applied has to be estimated accurately and it had to be printed in one swipe/ stroke. Depending on the composition, more black areas means that we have to apply more black ink. Like for my composition, I had to apply a lot of black ink to it. 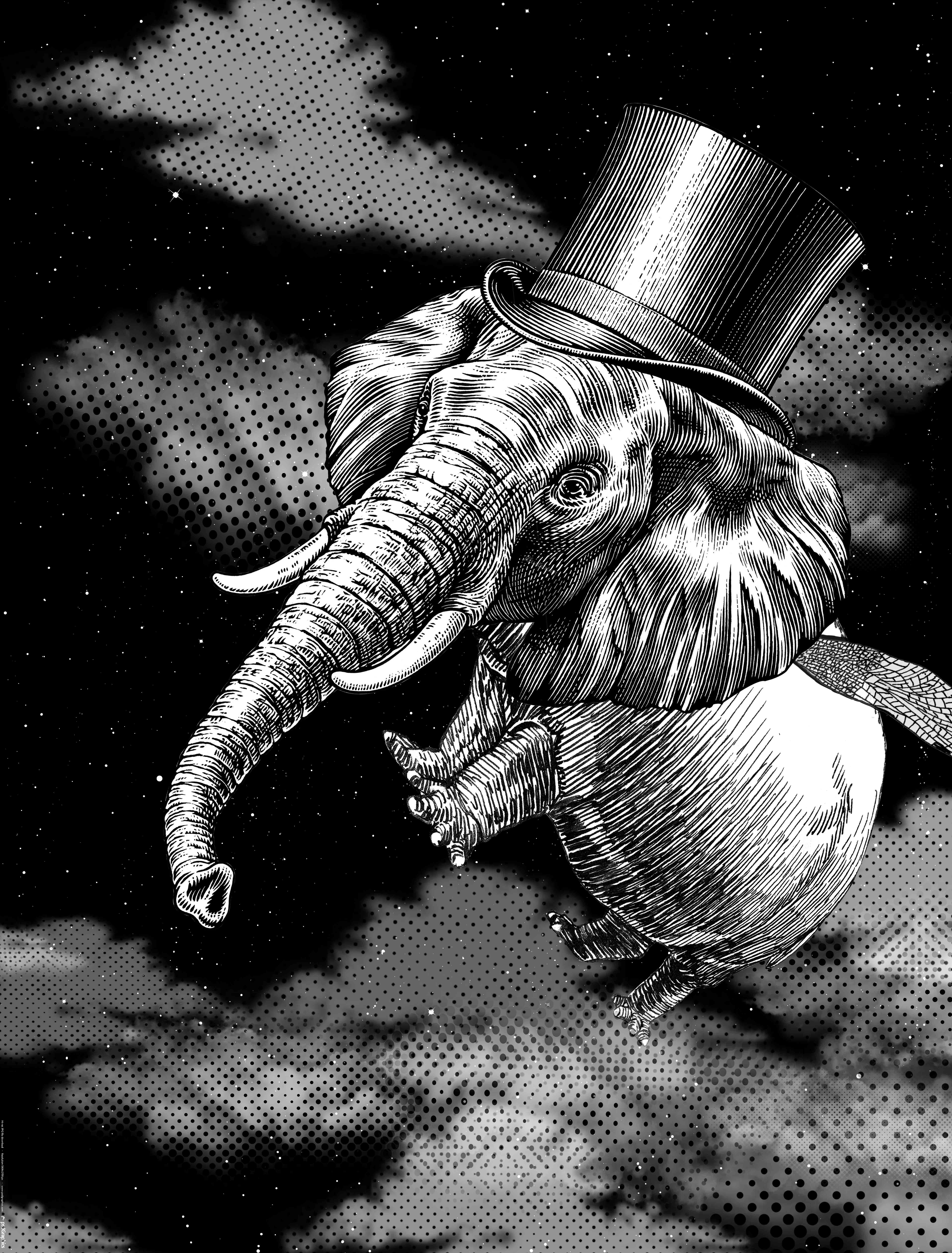 “You mustn’t be afraid to dream a little bigger darling.” – Inception

For this quote, the main emphasis is on not being afraid, to dream big. When I think of the word dream, I instantly linked the word dream with fantasy. And when I think of fantasy, all I can imagine are mythical and magical beasts and creatures like the ones we see in the movie Alice in the Wonderland, Where the Wild Things Are and The Spiderwick Chronicles. Hence I decided to create a composition of a flying creature which has an elephant head, hippopotamus body and dragonfly wings to represent dreams and dreaming big. 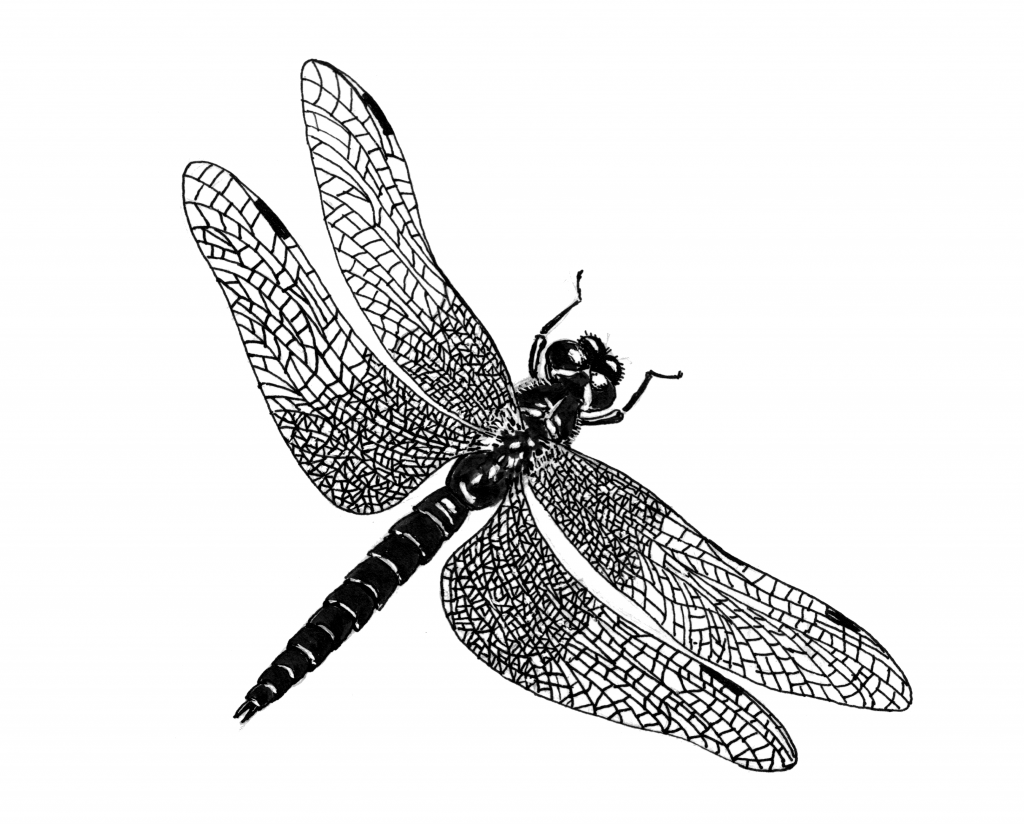 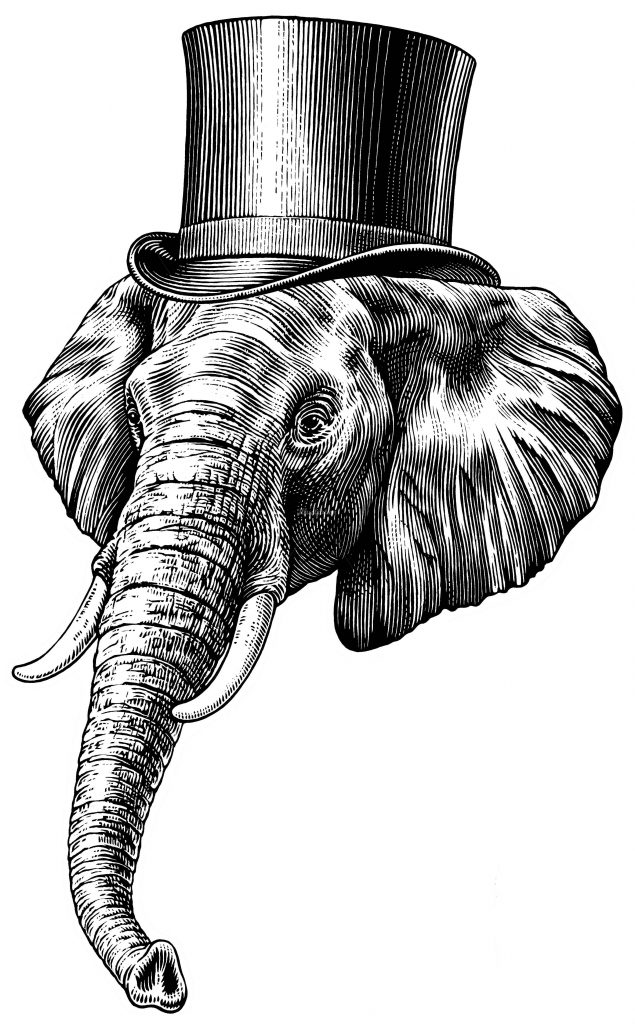 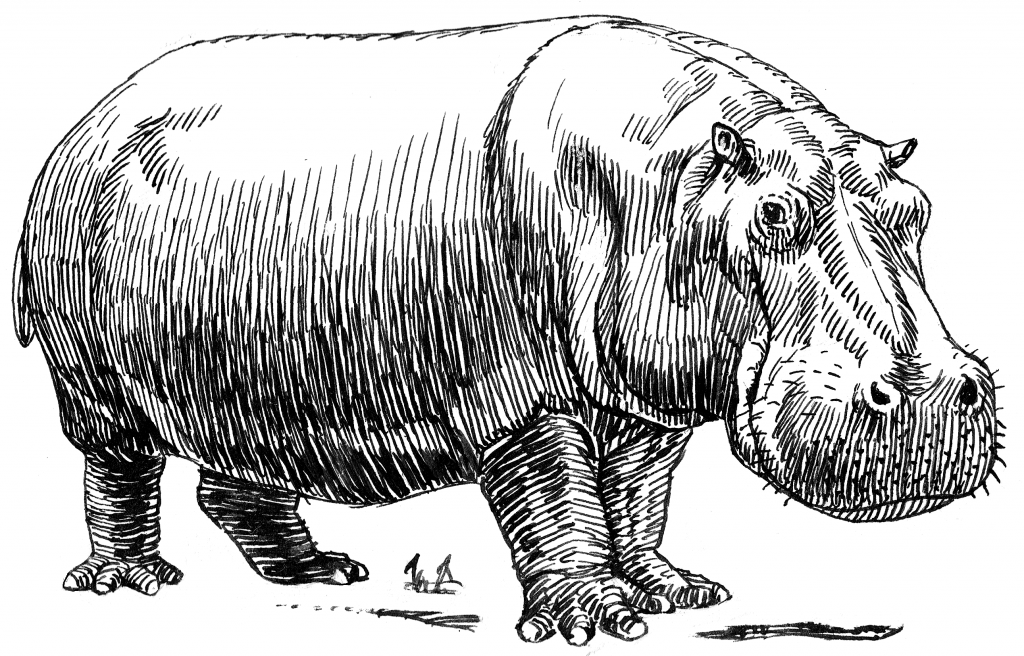 And for the idea of not being afraid, I initially wanted to show the creature flying out of a brain. However, the idea of showing a brain is too literal therefore I switched to showing the creature flying and emerging through layers of clouds with a starry background. Besides, flying through clouds can also bring out the idea of exploring into the unknown; having big dreams. Also, the combination of clouds and starry background also creates a very magical and dreamy setting to the whole composition.

Suggestions on improvements after consultation:

The design principle that I adopted for this composition is hierarchy. As what I had mentioned previously, the clouds before the adjustment was too overpowering hence it competes in terms of the visual presence with the creature even though the creature was the dominant figure. Hence after the adjustment, the design looks better as the dominant (creature), sub-dominants (clouds + black background), sub-ordinate (stars) becomes clearer. Besides, also apply the principle of contrast by placing my creature behind the black background to make it stand out even more.

Things that are associated with beautiful things to me are a beautiful lady, flowers, butterfly.

For beautiful lady, I purposely make it look faded so that we cannot see it clearly hence creating a mysterious vibe to it. I then placed the Tulips that symbolizes love and beauty and added butterflies around the lady to further emphasize beauty. Next, I  placed the composition in a mirror as mirror attracts attention.

How the composition works is through the idea of perspective. As audience looks at the composition, they expect to see something being reflected in the mirror, however, there is nothing inside the mirror. Instead, their attention now shifts to the tulips, butterflies and the girl outside of the frame. The beautiful things become the secondary attention hence conveying the idea that beautiful things do not ask for attention.

The principle of design that I adopted for this composition is balance and alignment. I intentionally aligned everything symmetrically so that so that the audience’s attention is drawn directly to the mirror which is at the center.  I also align the composition in such a manner whereby everything is connected hence the audience attention will shift naturally from the lines to the mirror than outside of the mirror again.

Tulips duplicated to cover the bottom part of the composition.

“No man can walk out of his own story.” – Rango

Break down of quote gives the idea of unable to escape and being stuck. Hence I thought of creating a composition that is similar to the stairs illusion.

For my first composition, I experimented it by stacking and arranging the stairs in different directions in a random manner to form a maze. I divided the man into 2 parts, the leg and the body. As the man tries to walk out of the frame, his right legs appears back into the frame hence showing that he is unable to escape. Besides, I added a door that is inaccessible in the maze to create the idea of trapped.

One of issue with the composition was that the stairs was not really visible, so I changed the picture of the stairs. Again I placed the stairs in random order to make it look like an illusion. The placement of the inaccessible doors and inverted man defies the law of physics of the reality making it look like a limbo world. Besides, I added the background that resembles a net to reinforce the idea that the man is trapped in this world.

After my consultation, it was suggested that the net looked too overpowering visually. Therefore, I was recommended to change the my stairs to find engravings of it instead of using images via halftone. However I was unable to find quality pictures of engravings that I really liked. Thus I had to adapt and change my background instead.

For this composition I adopted the design principle of hierarchy. The dominant for the composition is the stairs which I intentionally duplicate them and place them randomly across the composition in different sizes. The subdominant is the grid background to further add on the illusion setting which I wanted to create. Next the human figure and the door are the sub-ordinates.

“The dead know only one thing, it is better to be alive.” – Full metal jacket

Keywords: Dead, Better to be, Alive

Before starting on my composition, I decided to search for all the symbolism of dead/death and alive/life and pick out a few that best fit the quote. 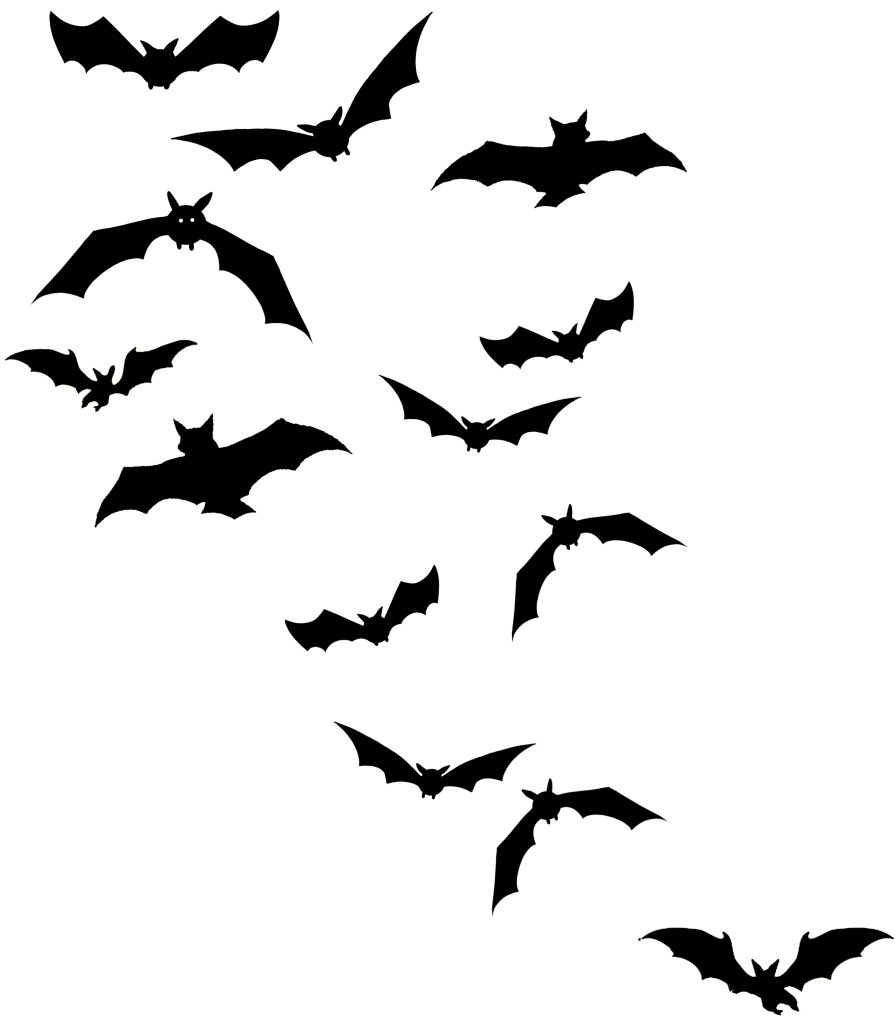 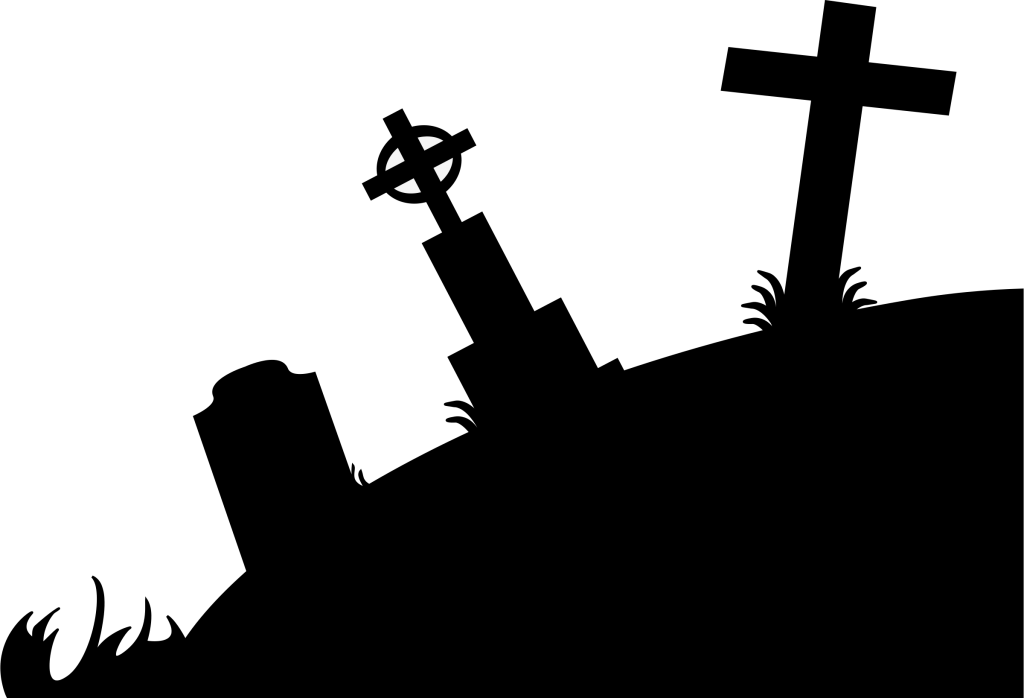 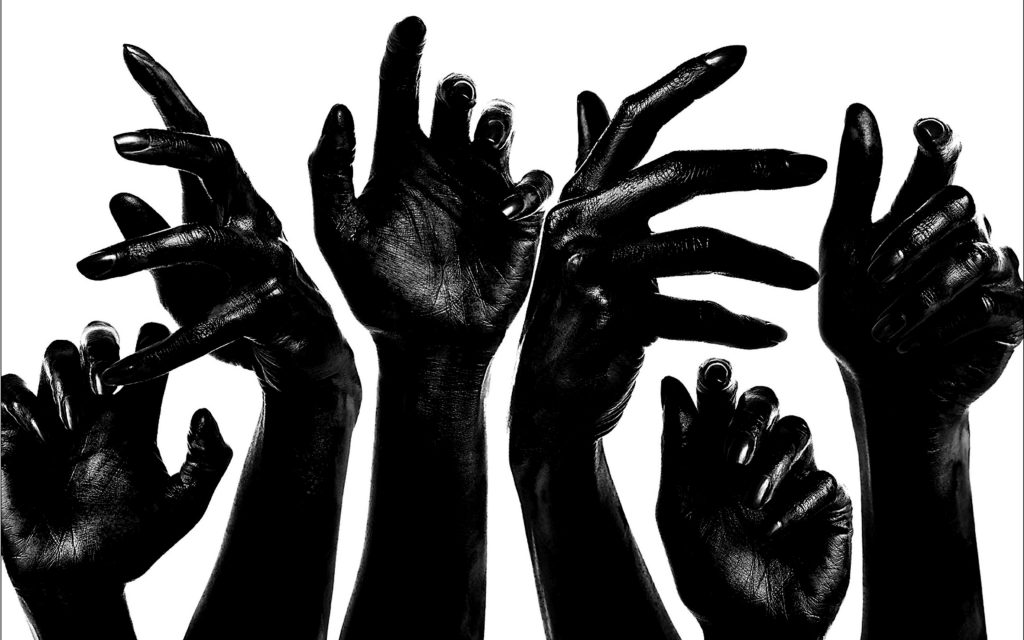 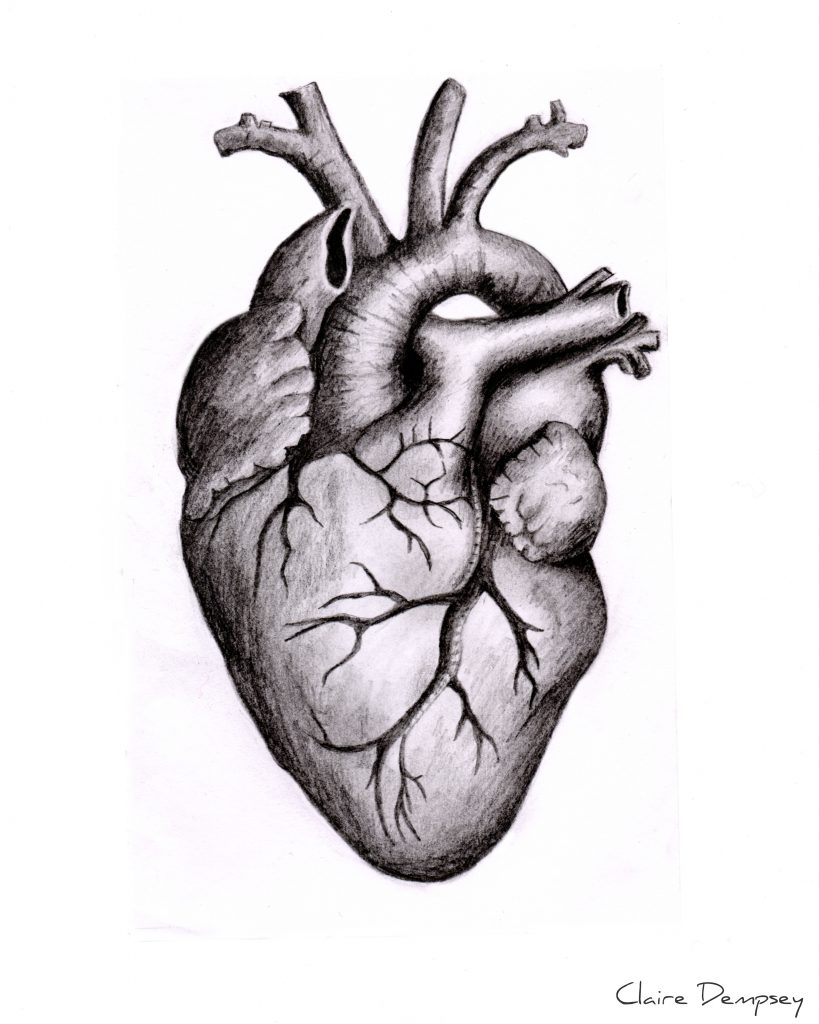 After picking out different pictures to symbolise dead and alive, I combine the 2 elements together to produce a composition showing the dead rising from the grave trying to grab the heart. However, the composition looked very boring and the alignment looked very planned.

Hence to make my composition look more interesting I thought of the idea of using the contrast as my principle of design. I intentionally made my background black so that the heart stands out the most due to visual contrast. Besides, I also played with another design principle, hierarchy. Because i wanted to maintain the heart as the main focus, I gave the grave, raven and the hands minimal highlights so that it does not compete with the heart for visual presence but stands out at the same time. I also removed the bats and made the arms looked more proportionate and added the blood drip on the bottom of the heart. I want it to be simple but looked interesting.