I was considering multiple options as to what I wanted the headpiece to look like but I knew I wanted a veil or mask structure to be covering the face.

Initially, it was going to be a scale headband that wrapped around his head with a veil attached to the front but I felt that there was a lack of harmony in that. Thus, I considered other options like having a cap as a base.

To meet the criteria of the brief of needing both organic and inorganic materials, I chose green peas as my organic to work with the circular thumbtacks. Both the peas and the tacks have a similar range in diameter and would work well side by side. 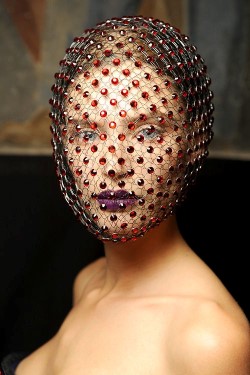 Inspired by this Armani headpiece that wrapped around the whole face like a net and went to YouTube to learn how to make a net.

This is my first attempt: 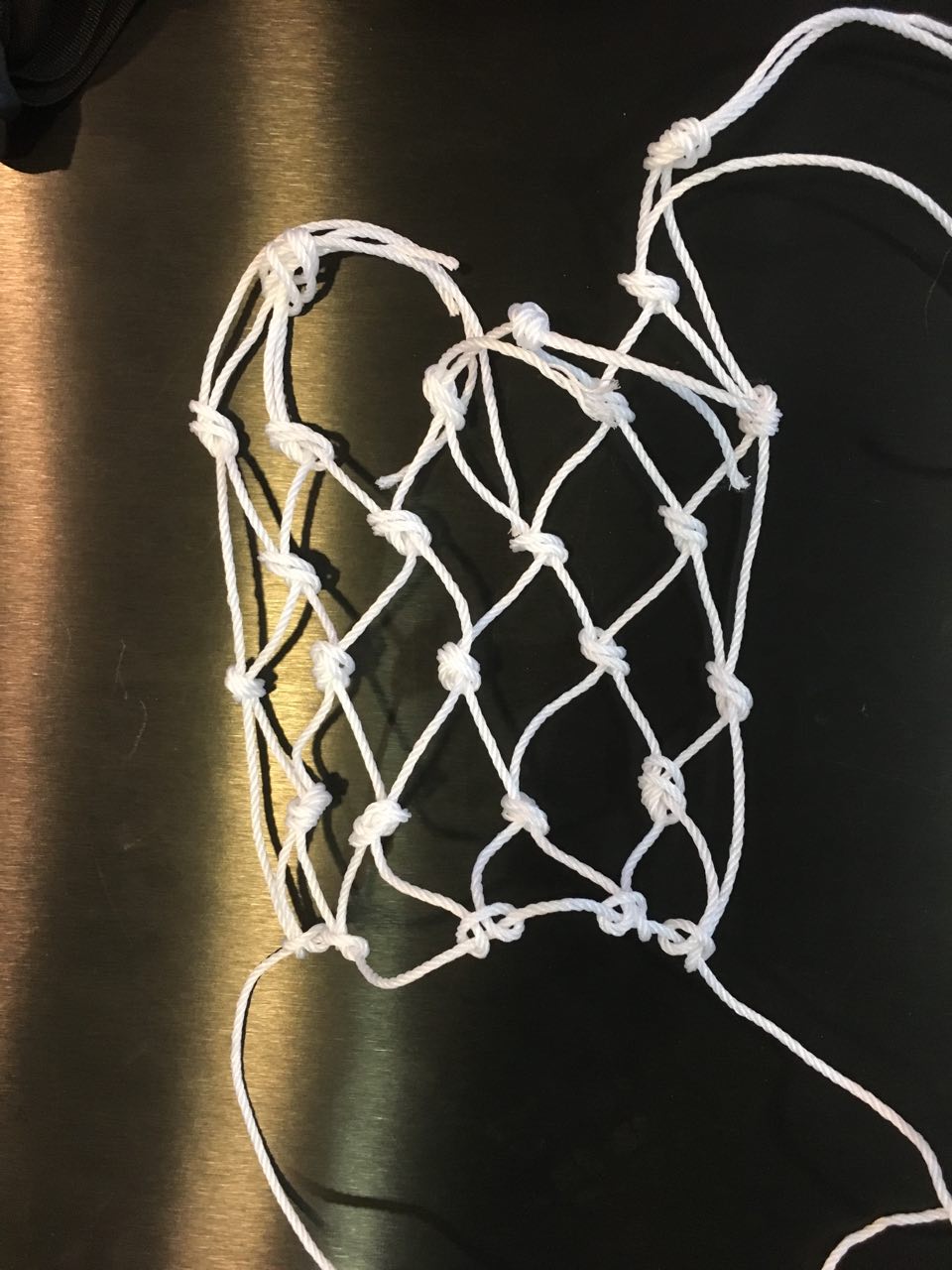 I was using some nylon rope from the 3D workshop and found that it was too thick and bulky to be on a face.

I tried other materials as well:

Ms Sherry then recommended this orange cording that not only was a good thickness for a headpiece, the orange of the cord also provided a burst of colour against the face and thumbtacks.

Result with thumbtacks hot glued on: 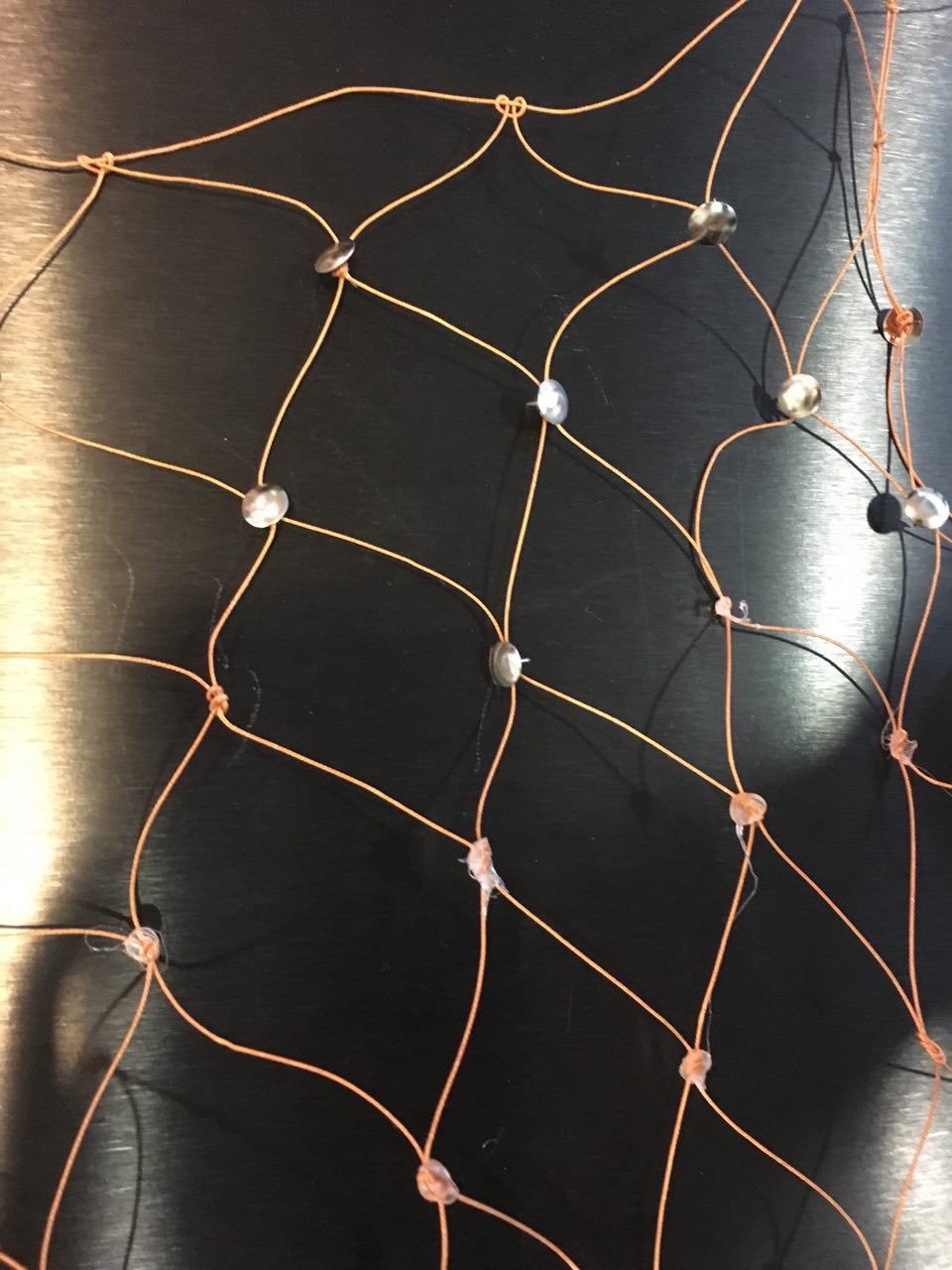 I then attempted to hot glue some peas on to the knots but after a night in an airconditioned room, they dried up and fell off. 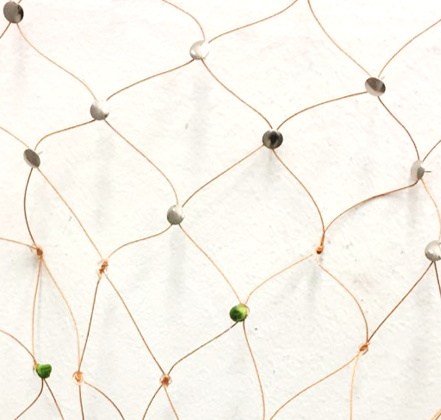 (I noted that thawed frozen peas are compatible with hot glue.)

I then proceeded to make a cap to attach the net to as when placing the net on my model- Nick’s head his hair was short enough that it stuck out in tufts from the holes. The net was also not a very structurally rigid textile and thus did not sit on the head well.

I initially thought that making a skull cap was not too difficult and just attempted to make one from two semicircles of cloth and hot glued the seams together. 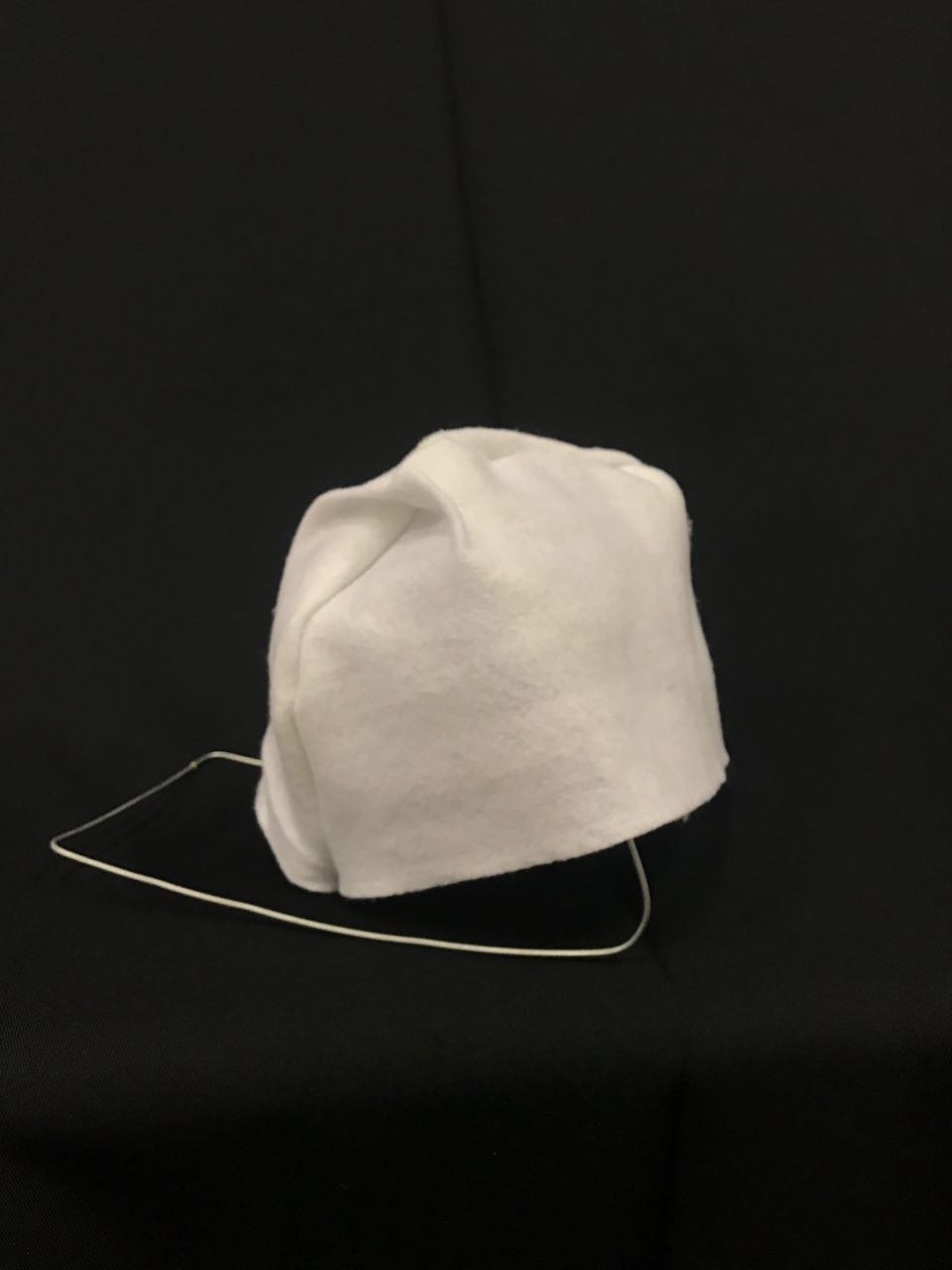 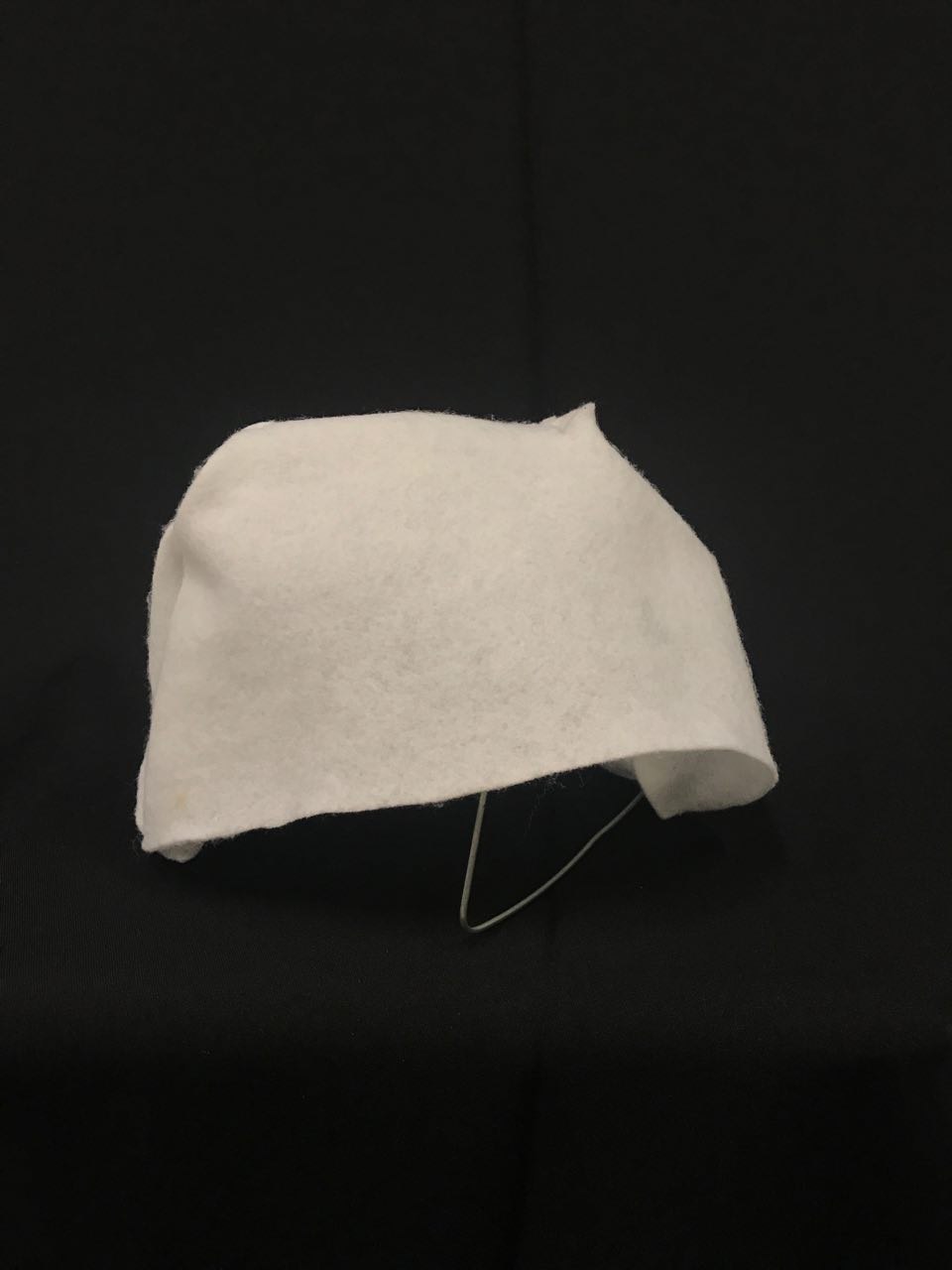 So I took to the internet for a pattern to follow. I found the one below for a bike cap but I decided to leave out the bills and just use the skullcap part. 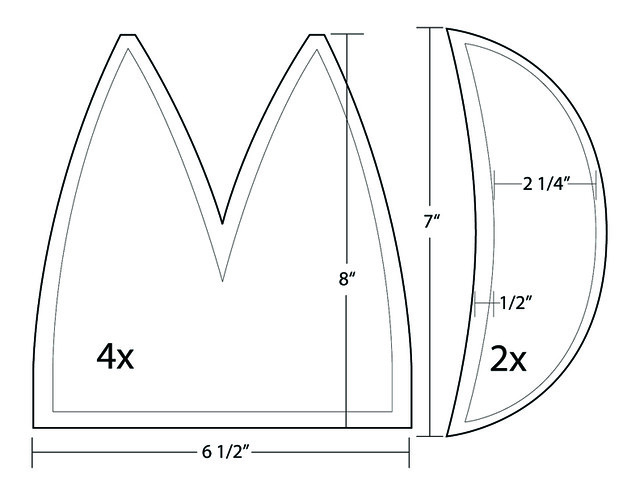 I used white felt and hand sewed the cap together. I sewed one of the seams the other way to create a small fin so the cap had more structure on the surface. 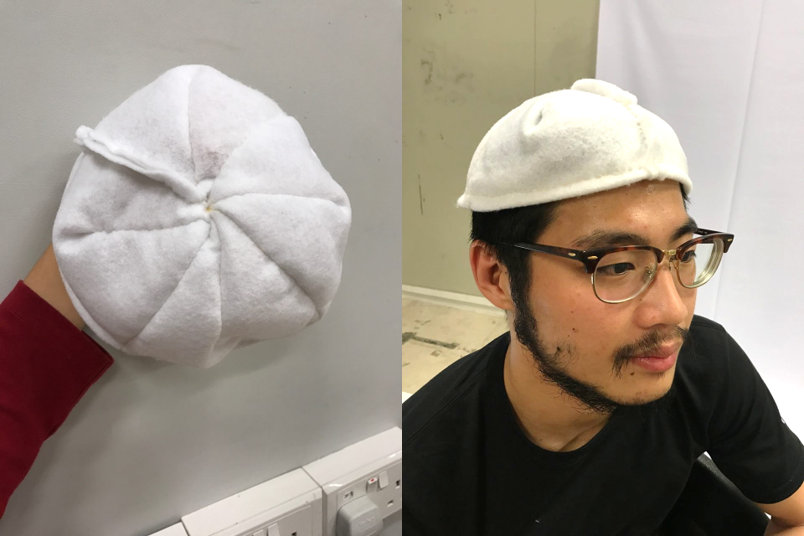 I added the thumbtacks to the fin by just sticking them in and adding a lot of hot glue to the inside of the cap to protect Nic’s head. Then, I realised that this was very dangerous and only worked because the fin provided more fabric to buffer the pin. So for the rest of the tacks, I hammered down the pins of the thumbtacks and glued them on in the scale pattern.

I also added a decorative braid of orange cord (3×3 cords) with hot glue but it ended up looking more like an Islamic prayer cap.

Inspired by the Tibetan headpiece with hanging beads, I strung the peas together with a needle and thread. (Due to the previous pea-drying incident, I bought a new bag frozen peas and thawed them out the night before. So I had to do all the pea structures the night before 🙁 )

I was having some issues thinking of a way to attach the peas, cap and net together so I scrapped the net and made a metal wire frame (above as the frame to photograph the failed caps)  to hang some stringed peas on as a veil. I had the frame be further away from Nic’s face as the peas smell like dirt and I didn’t want them to have to rest on his face. 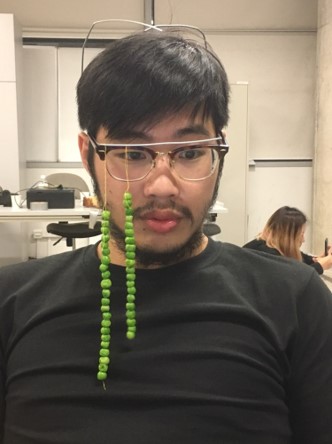 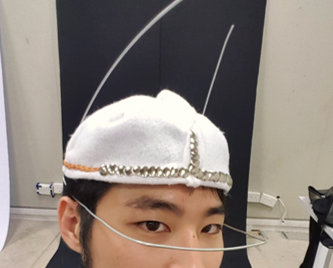 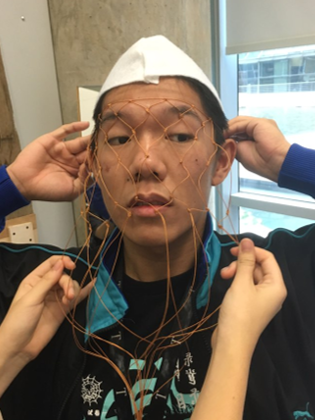 I made a new net to better fit the face and created a new pattern instead of having a uniform diamond pattern. Longer diamonds at near the eyes and cheeks and shorter, more squished diamonds near the mouth.

I realised that with this new pattern allowed the net to sit on the nicely as long as the bottom was weighted down.

So I decided that the peas would be nice as weights and as stringed peas. I had to fray the cord and isolate one “string” to thread a needle and string the peas down two cords.

I covered and sealed the knots and loose ends of the cords with flattened thumbtacks glued back to back. I liked the look of the ends of the pins peaking out of the heads of the tacks and decided to leave them there as they could also act as weapons for Emiko.