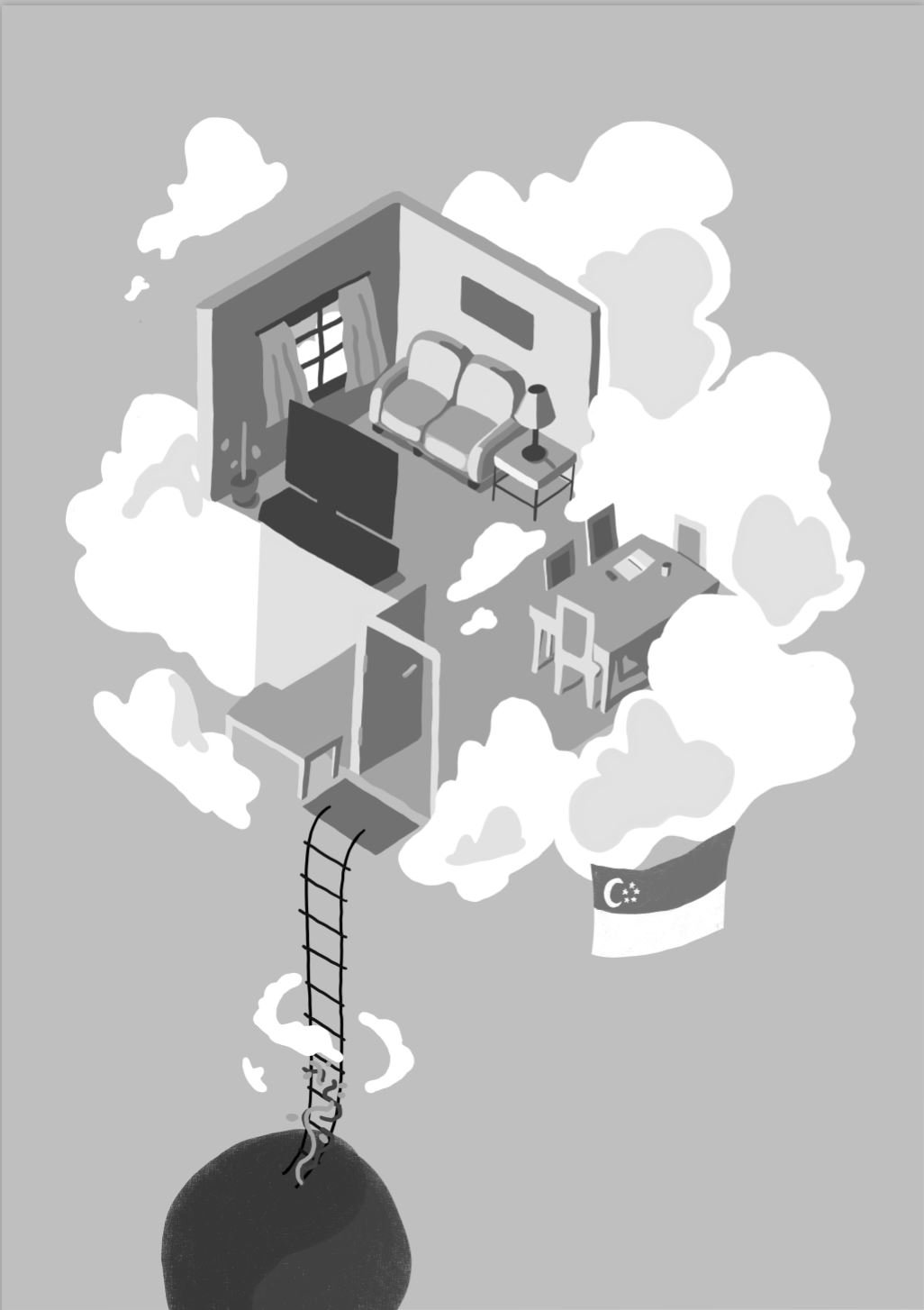 Zaf: family-oriented, worked hard to get to where she is, dreams of stability, rooted around her people, dreams seem far away

Images and symbols: I thought it would be nice to represent Zaf as a house that a family would live in. Like her dream BTO home. I wanted it to be drawn isometrically as it would add to the architectural simplicity but also provided a warped false perspective – which hints to how she feels it is still unachievable at this moment. Because the dream of this house and stability is far-fetched, the image and the house’s contents are unclear and still generic. That is also why the house is open-faced, to see into it but also to represent the incomplete picture.

I wanted to note her hardworking spirit as a ladder as she has climbed to get to where she is now, and will continue to climb until she achieves her dream. To emphasise the perceived distance of achieving the dream, I placed the house in the sky and the ladder tethered to the ground. The ground represents where she started and is rooted to, where she can stay rooted to despite chasing her dreams.

Style and technique: I chose to omit the aid of rulers or straight-line brushes as I wanted to emphasise the dreaminess and almost surreality of a far away, half-constructed dream. The geometric shapes still hint to stability, but the lack of straight lines assume a sense of unsureness. The soft contrast also adds to this imperceivable aspect of a dream that has not been fully realised, versus the darkness and sharpness of the ladder and the “Earth”.

Jessie: Nostalgic, really wants to be in Sibu, wants to relax.

Images and symbols: I wanted to show contrast in the idealised state of calm and my current state of distress. A little bit dramatic, maybe just stress. I used the iconic image of the water tower near my grandma’s house back in Sibu as the main location of the portrait and added a beach into it. The beach is somewhat shaped like a ying-yang, symbolising peace (I decided to do away with this as it didn’t seem that strong).

The sky is dark and the moon is bright to set the scene of the 3am emergency return flight. The plane we flew on was a turboprop so I wanted to add the nose propeller. I’m not sure what I would do on the beach except really sleep and maybe make some sandcastles.

Style and Technique: Higher detail on the beehive and water tower as they are prominent memories in my mind. However, they are distorted in detail and accuracy due to nostalgic warping. The beach portion is very minimal as I am unsure as to what exactly I want to do on the beach to relax but the key point is the beach. Grainy texture to play on the notion of nostalgia and how the details and memories feel like they are dissipating and slipping away like sand. 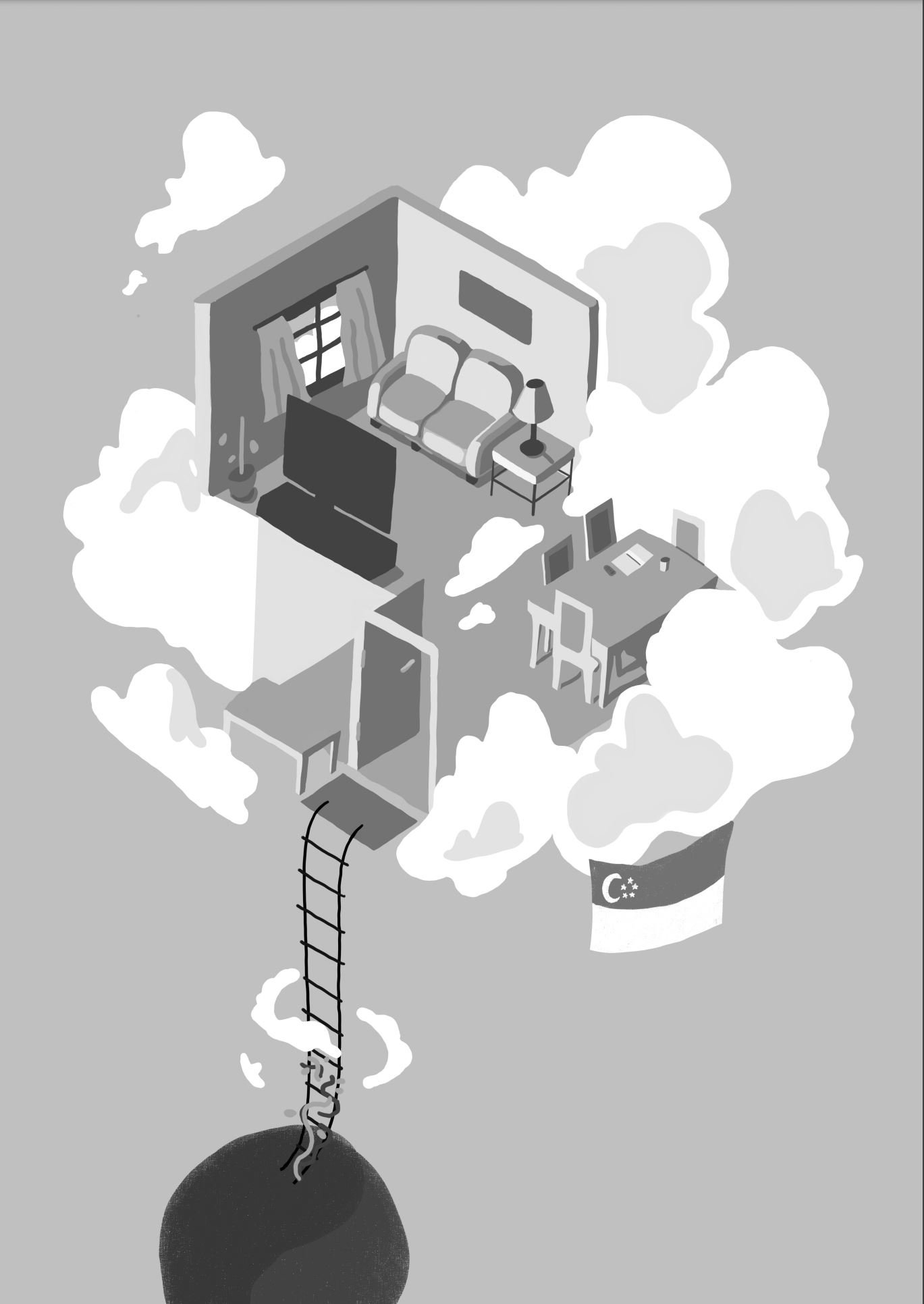 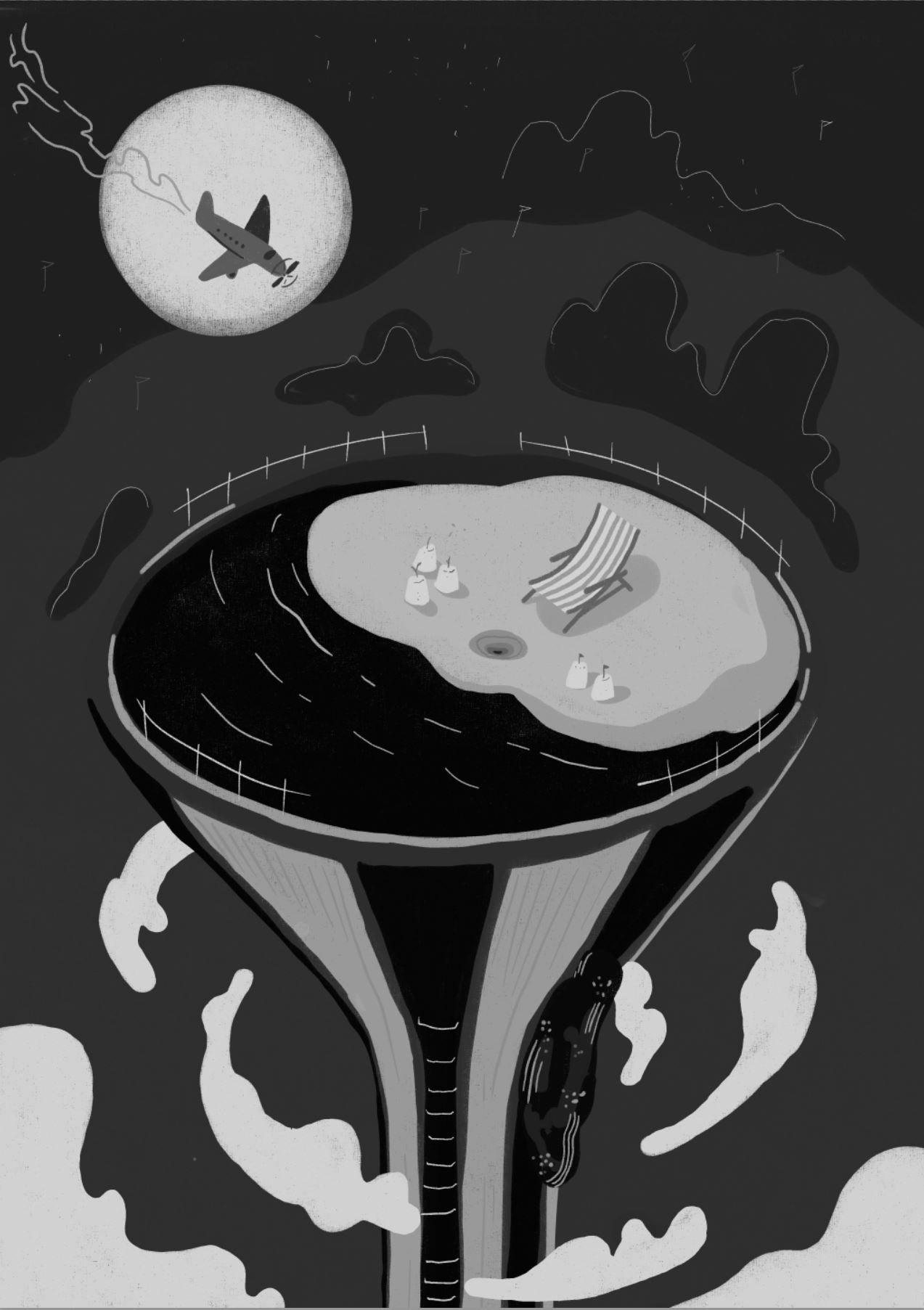