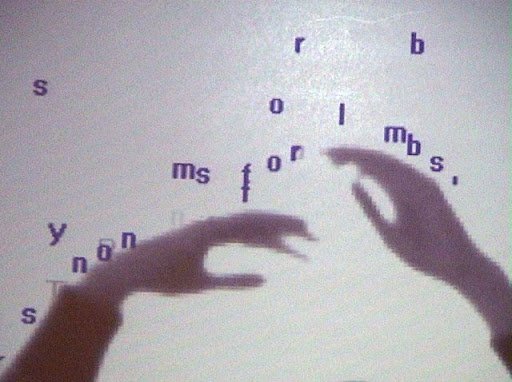 Text Rain is Utterback’s well-known and award-winning collaboration with Romy Achituv. It is an interactive installation that invites viewers in front of a large screen to catch individually falling characters of text with their bodies and anything attached to their form. The silhouette of an individual is treated as a boundary for letters to fall upon where participants are mirrored in black and white video projection. The letters are animated and colourful and possess a sense of bounce.

Viewers and participants are able to ‘catch’ a recognisable word, either by chance or with effort. This uses the body as a cybernetic tool to make sense of literature in the form of the falling poem: ‘Talk, You” by Evan Zimroth in 1993. It highlights the ephemerality and transience of language as well as interactive works in video. Where words can be lifted, held and dropped again.

This work is inspirational as it is simplistic and yet engaging and allows participants to have fun while uncovering the impermanence of words and language.